All in the Family: How Archie Bunker Still Resonates

The cover of LIFE's special issue on All in the Family

In one of the show’s classic episodes, guest star Sammy Davis Jr., playing himself, left his briefcase in Archie’s cab and came to his house to retrieve it.

The following is the introduction from LIFE’s new special issue celebrating All in the Family on its 50th anniversary.

WHEN ABC BROADCAST A REMAKE OF AN episode of All in the Family, shot before a studio audience in 2019, the network recreated the Bunker family home In Queens, New York, down to the doilies and faded wall­paper, with Woody Harrelson and Marisa Tomei taking up Carroll O’Connor and Jean Stapleton’s roles as Archie, the ultraconservative loading-dock worker, and his kindly wife, Edith. Set in 1976, the episode centers around the unexpected arrival of David Brewster, their son-in-law Mike Stivic’s high school friend, a Vietnam War draft dodger who fled to Canada but just sneaked home for Christmas. When Edith invites David to join them for the holiday dinner, Mike cautions his friend not to tell Archie what he’d done—and to avoid such topics as “politics, religion, sex, books, movies, war, peace, guns . . . grapes, lettuce.”

Archie, meanwhile, has invited his pal Pinky Peterson, whose son Steve was killed in the war. Mike’s worst fears are realized—David’s secret spills out and the joyous gathering quickly devolves into a bitter confrontation over the war, with a spitting-mad Archie yelling, “What he done was wrong!” Finally Pinky stands up and makes peace. “My kid hated the war too,” he says. “But he did what he thought he had to do. And David here, he did what he thought he had to do . . . if Steve was here, he would want to sit down with him. And that is what I want to do.” Pinky then walks over to David and shakes his hand.

All in the Family debuted 50 years ago in January 1971, two years before the United States withdrew from Vietnam, and four years before that divisive conflict ended. Fifty-eight thousand Americans died in Southeast Asia, and when the Christmas special originally aired in 1976, the war was still a festering wound. The very day ABC restaged the show in 2019, Congress had started impeachment proceedings against President Donald Trump, and the country found itself as polarized as ever. So much had changed in four-plus decades—and yet so little.

Back in the 1970s, of course, it was bold for a sitcom to take on such a sensitive topic as the war. But All in the Family was unlike anything seen before on television. Up until then, TV had a blandly homogenous quality. Three networks, ABC, CBS, and NBC, ruled the airwaves, and the newly created Public Broadcasting Service had a niche audience. They all worked under a draconian Television Code, and offered wholesome and uncontroversial family entertainment. There was no political content, and situation comedies were inhabited by white middle-class families, noble lawmen, and quirky country folk. One of the few working-class shows was The Honeymooners, which centered around Brooklyn bus driver Ralph Kramden, his wife, Alice, his sewer worker friend, Ed Norton, and Ed’s wife, Trixie. It went off the air in 1956 after just one season, but would gain classic status in reruns. The Honeymooners influenced another series about working stiffs—this one animated: The Flintstones, which first aired in 1960 and featured Fred Flintstone, a prehistoric quarryman from the town of Bedrock, his wife, Wilma, best buddy, Barney, and his wife, Betty.

That was about it for blue-collar comedy until Archie Bunker barged into America’s living rooms. Here was a full-throated “angry white man” from the borough of Queens who proudly proclaimed, “I hate change.” Americans had never seen a character like Archie on their television screens. He epitomized President Richard Nixon’s Silent Majority—conservatives who felt overlooked by the general public and Washington politicos—and he broadcast his biases and prejudices every week as he jostled with Mike and his feminist daughter, Gloria, while demeaning the superficially dim but disarmingly insightful Edith.

Yet though Archie was proudly reactionary, he harbored a hidden kindness, and the show possessed a subversive and not so subtle radicalism. During All in the Family’s nine seasons on CBS, creators Norman Lear and Bud Yorkin used their series as a televised soapbox to masterfully portray the upheavals and concerns racking the United States. They slyly wove current events into a sitcom and used the medium to explore the rifts within American society and culture. The show pondered the war, the Watergate scandal, and the liberal-conservative divide and depicted the country’s changing views on such topics as politics, race, sex, religion, and women’s rights.

The character of Archie could easily have been one-dimensional, even villainous. But Carroll O’Connor’s indelible portrayal presents him as deeply flawed yet oddly likable, with reservoirs of decency—more absurdly misguided than malevolent. Through All in the Family, Lear, the program’s mastermind, sought “to show that if bigotry and intolerance didn’t exist in the hearts and minds of the good people, the average people, it would not be the endemic problem it is in our society.”

As a result, All in the Family quickly did more than become a top-rated, Emmy Award–winning series that promoted a positive, progressive agenda. This revolutionary show about a reactionary man helped foster an openness in culture. It transformed the very nature of what could be broadcast into our homes, and paved the way for other shows with working-class as well as racially diverse protagonists. Half a century later, its humor and message remain prescient, as it plumbs problems that still vex our families and society, and seeks to understand and explain the very soul of America.

Here is a sampling of images from LIFE’s new special issue All in the Family. 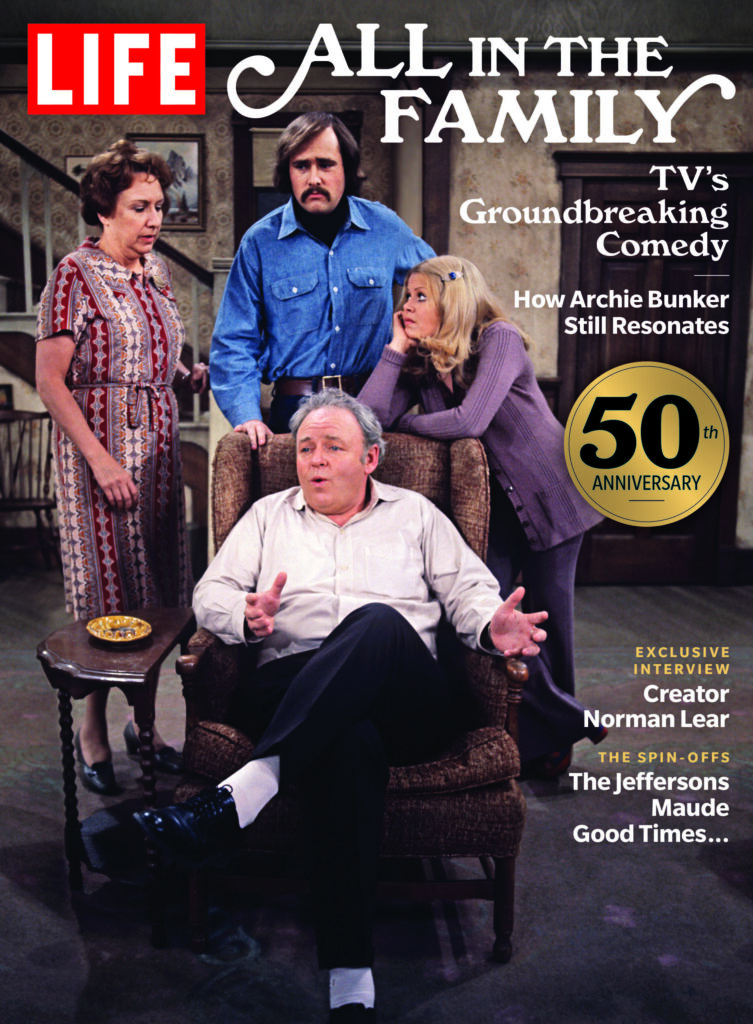 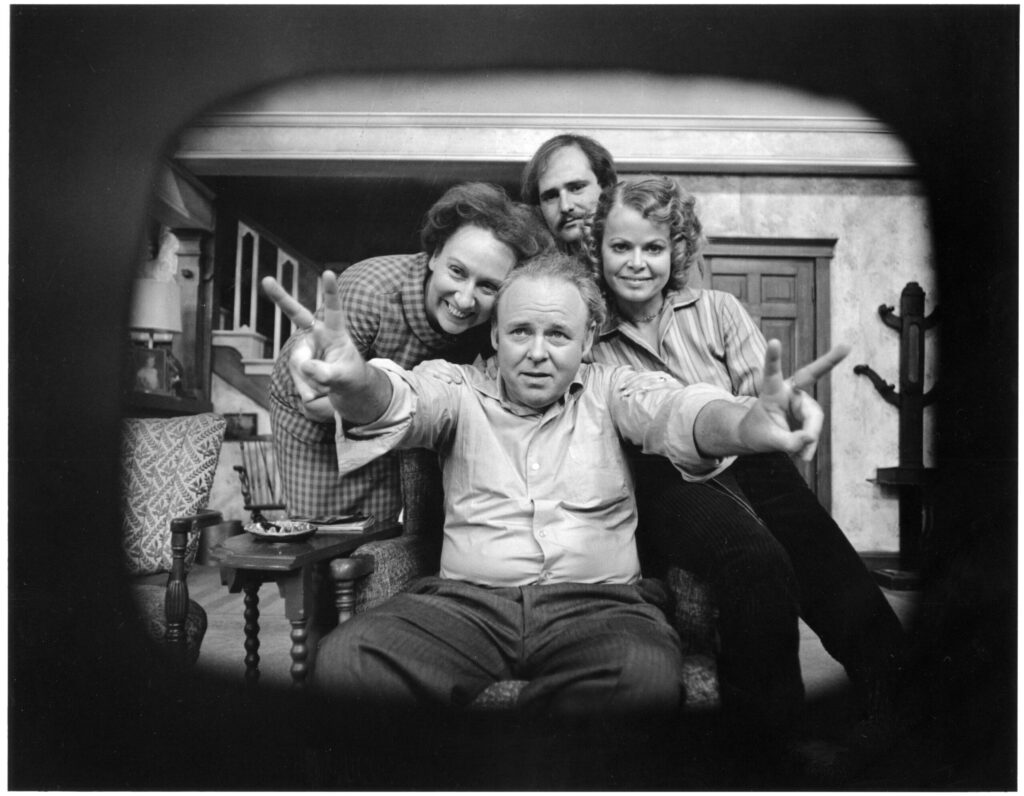 The cast of All in the Family: Jean Stapleton (Edith), Carroll O’Connor (Archie), Rob Reiner (Mike) and Sally Struthers (Gloria). 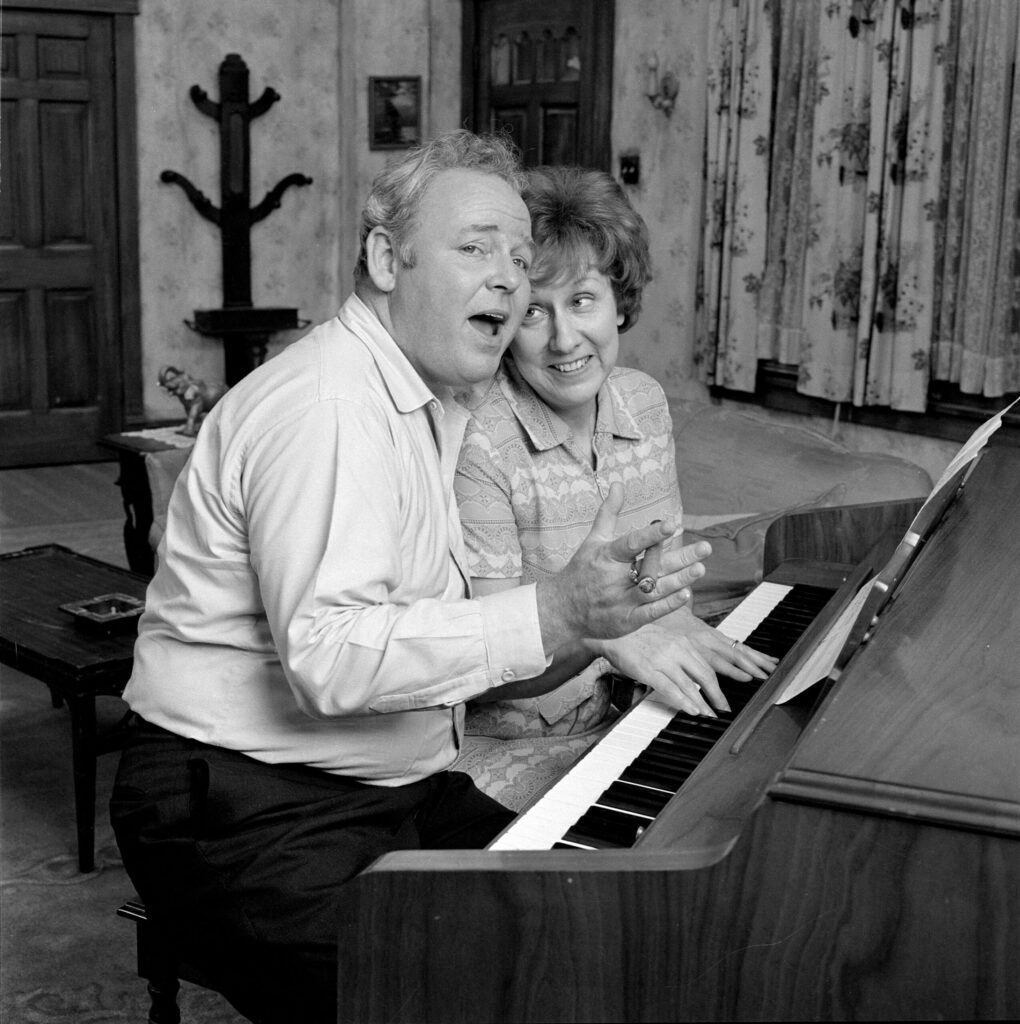 Carroll O’Connor and Jean Stapleton performed the show’s opening theme song, “Those Were the Days.” 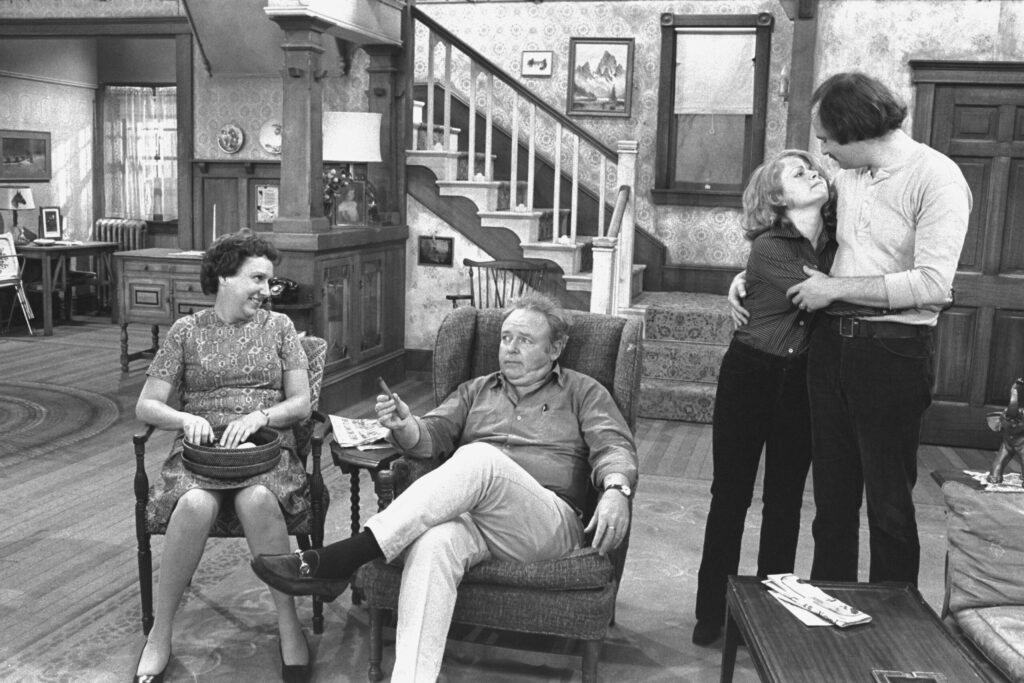 Archie’s disdain for the liberal son-in-law he called “Meathead” represented a clash of generations and cultures. 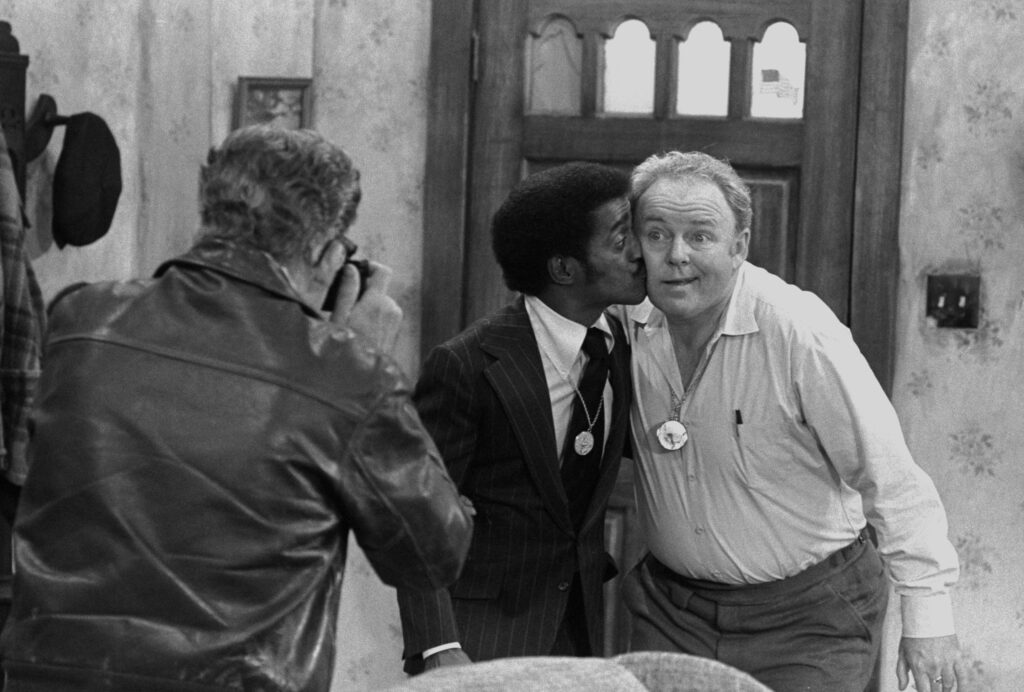 In one of the show’s classic episodes, guest star Sammy Davis Jr., playing himself, left his briefcase in Archie’s cab and came to his house to retrieve it. 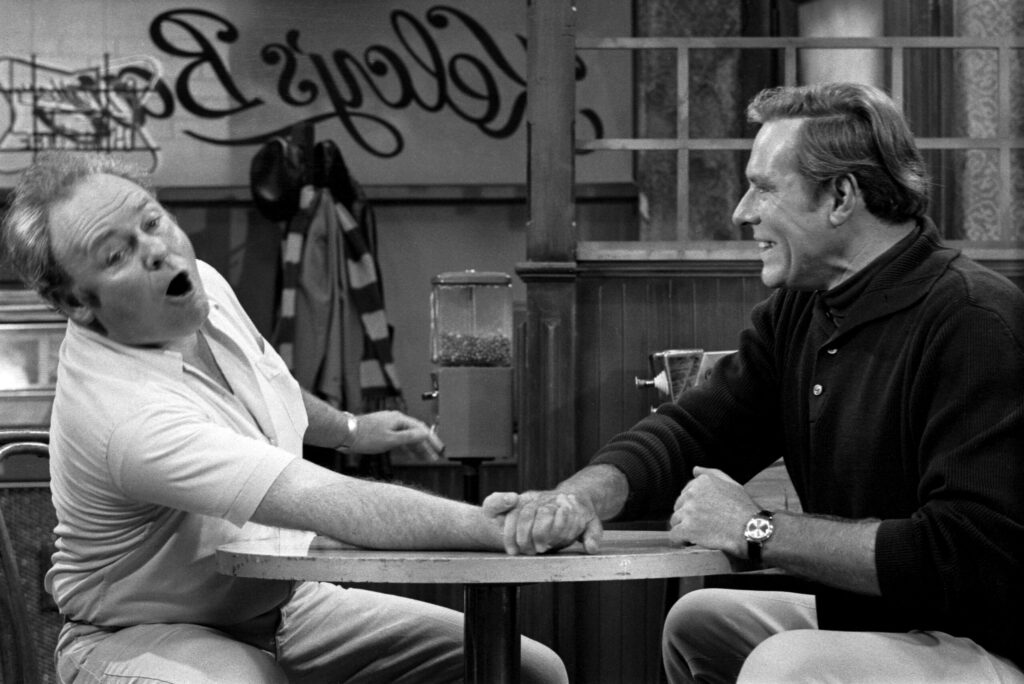 In the episode ‘Judging Books by Covers’, Archie Bunker learned that a football-playing friend was gay

Archie checked into the hospital for gall bladder surgery in an episode titled “Archie’s Operation.” 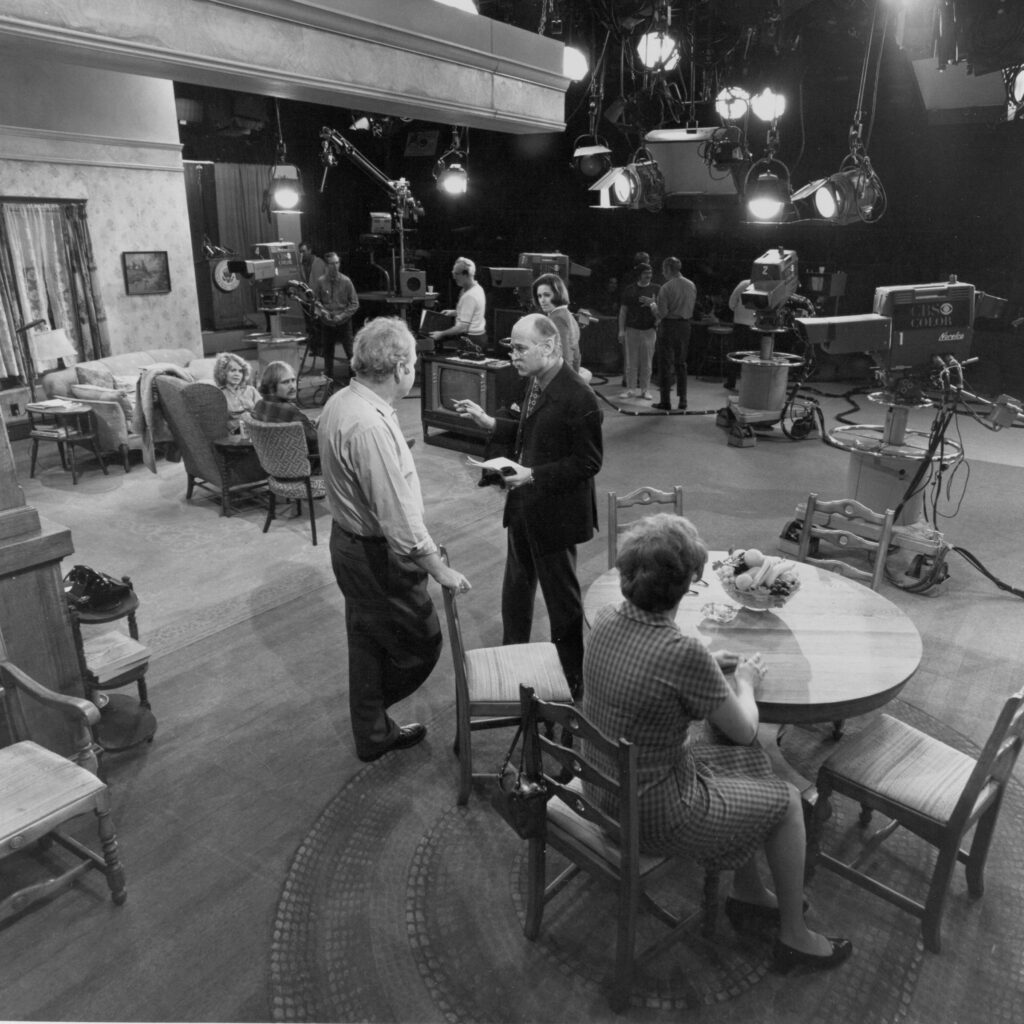 Producer and writer Norman Lear (center, in dark blazer) spoke with Carroll O’Connor on the set of the show ‘All in the Family,’ Los Angeles, California, 1971 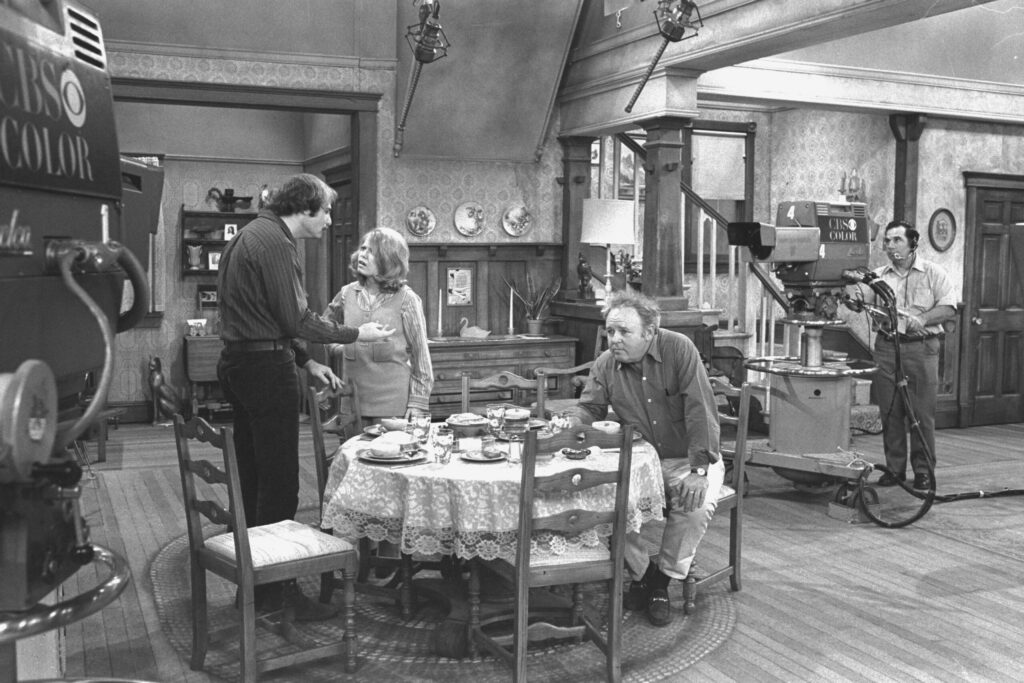 The dinner table was often where conflicts played out on All in the Family. 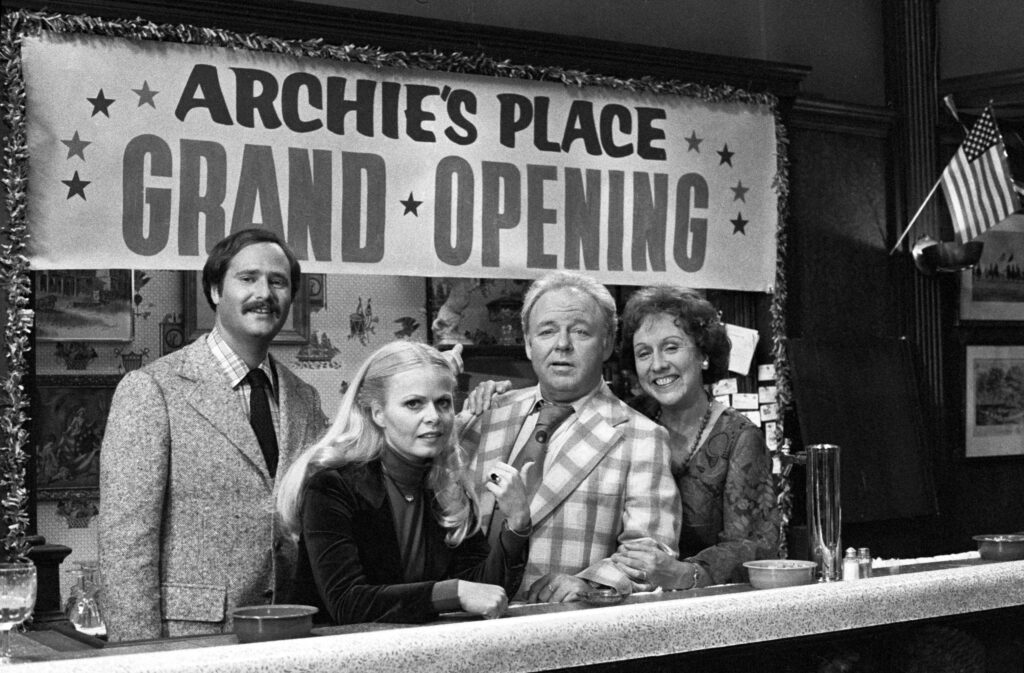 After Rob Reiner and Sally Struthers left the regular cast, All In The Family transformed into a new show called Archie Bunker’s Place, which ran for four seasons and centered around Archie’s bar. 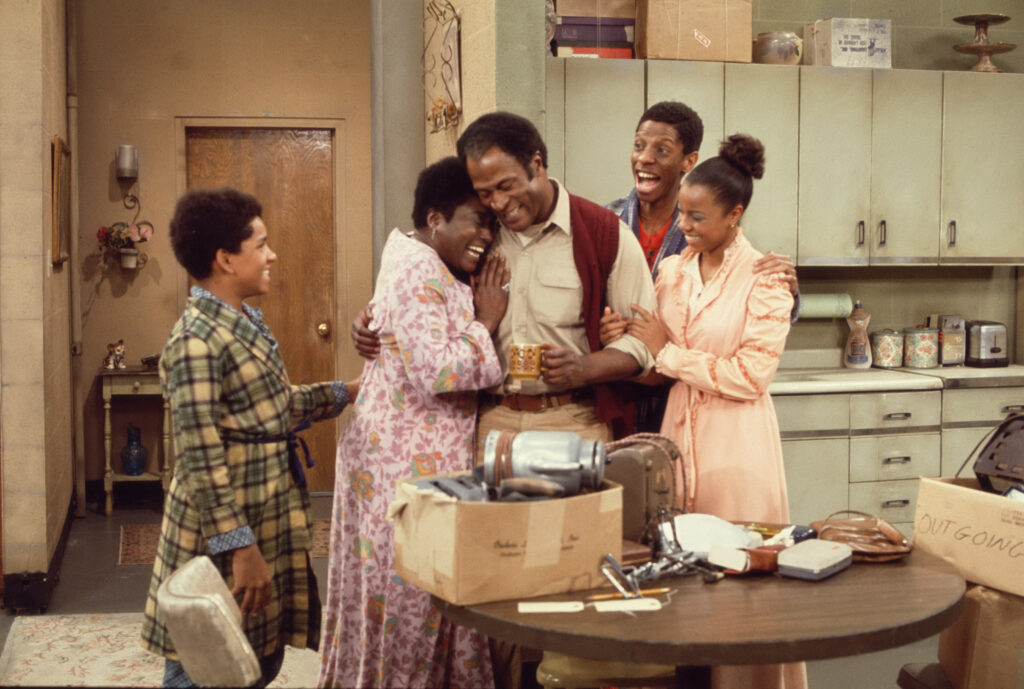 Good Times, the first African-American two-parent sitcom, was produced by Norman Lear and was a spin off of Maud, which was a spin off of All in the Family. Good Times starred (l-r) Ralph Carter, Esther Rolle, John Amos, Jimmie Walker, and BernNadette Stanis. 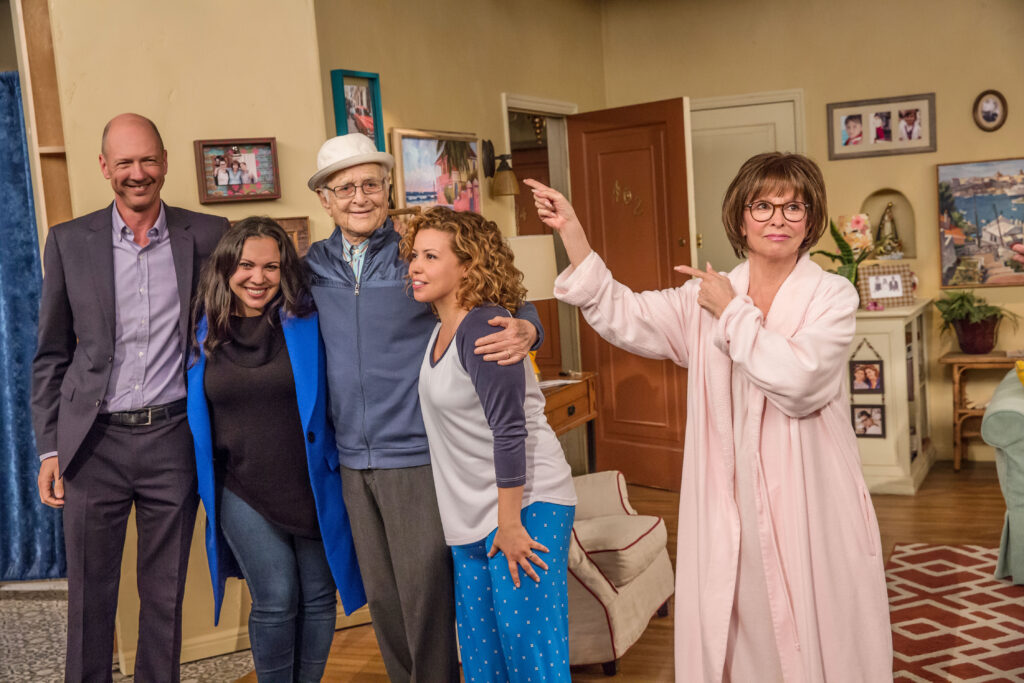 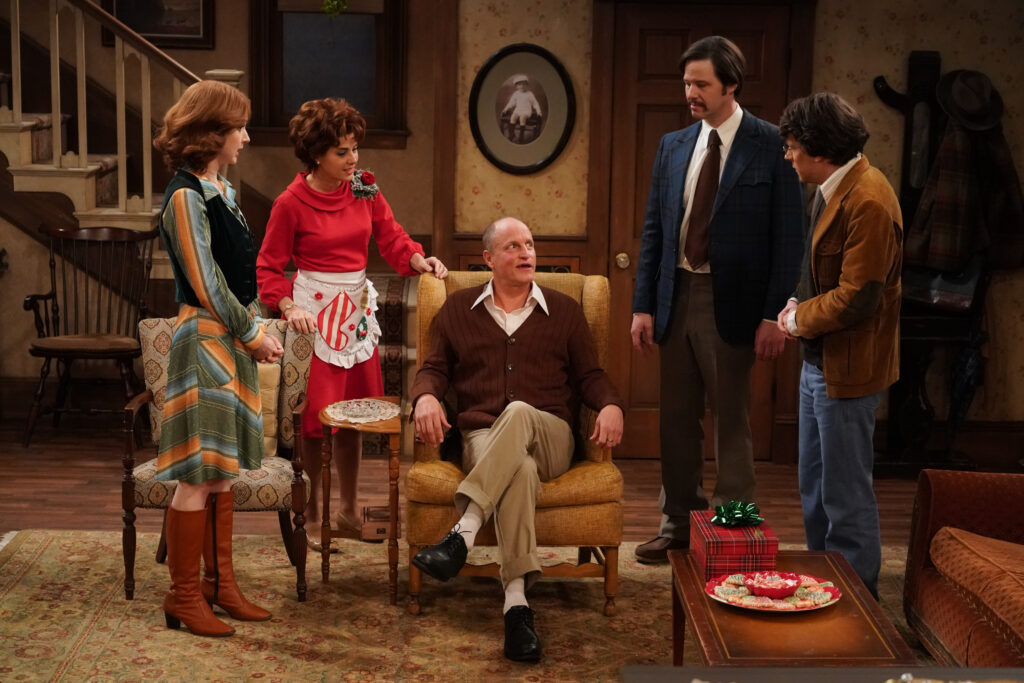 ABC’s “Live In Front of a Studio Audience” from 2019 recreated classic sitcom episodes, including one from All in The Family, featuring (l-r) Ellie Kemper, Marisa Tomei, Woody Harrelson, Ike Barnholtz and Jeese Eisenberg.