Pvt. Elvis Presley in Brooklyn, 1958, before leaving the States to serve in Germany.

The following is from the introduction to LIFE’s new special issue Remembering Elvis Presley: The King Lives On

There’s plenty of kitsch to indulge in on a visit to Graceland, the estate-turned-tourist-mecca where Elvis lived for the last 20 years of his abbreviated life. You might stay in a nearby motel with a guitar-shaped swimming pool and in-room televisions that show Elvis movies 24 hours a day. You might find yourself in a diner ordering deep-fried peanut butter and banana sandwiches. You might pony up for a stained-glass Elvis Christmas tree ornament.

But theme meals and tchotchkes would not be enough to lure the 600,000 visitors who come to Graceland each year, even now, decades later. It has beed nearly 44 years since the hot-awful summer of 1977 when, on the evening of August 16, newscasters and headline writers in 50 U.S. states and then in provinces around the world began to spread the news: Elvis Presley, dead at 42.

The flags in Memphis flew at half-staff the next day and thousands of fans traveled to Elvis’s home, to Graceland, to view him in his casket. When his hearse drove through Memphis for the funeral the day after that, many more thousands—half a million, some guessed—stood along the processional route.

Graceland is a 17,552-square-foot, 23-room mansion on 14 acres in South Memphis, off what is now known as Elvis Presley Boulevard. It’s about a hundred miles from the two-room shotgun shack in Tupelo, Mississippi, where Elvis was born, seven miles from the public housing apartment where he lived as a teenager and barely a 10-minute drive from the Sun Records studio where, in 1954 at the age of 19, Elvis made his first commercial record.

What you get out of a trip to that world—and why Graceland is so hugely successful, and touching in its way—is an impression of the man, not just the phenomenon or the caricature. You leave with the certain feeling that you’ve gotten to understand him somehow. Even despite a magnitude of fame and global idolatry almost incomprehensible in a modern, Twitter-riddled world, Elvis remained unceasingly authentic. Garish and showy and heavy handed in his taste, he was, to the bone, Elvis himselvis, the kid from small-town Mississippi made inordinately good.

That debut record at Sun Records studio was Elvis’s high-spirited version of a blues song called “That’s All Right (Mama),” which fits his story line neatly given that Elvis had first ventured into the studio looking to put down a song for his own mama, Gladys, whom he lived with until the day she died. Gladys is now buried, alongside Elvis and Elvis’s father, Vernon, and Vernon’s mother, Minnie Mae, in a place called the Meditation Garden at Graceland. This is where Spinal Tap guitarist Nigel Tufnel, quietly surveying Elvis’s grave, observes: “It really puts perspective on things, though, doesn’t it?” To which Spinal Tap frontman David St. Hubbins responds: “Too much. There’s too much f—ing perspective now.”

Sendups aside, the sensation of getting to know Elvis—the same incomparable Elvis whose life is exquisitely and intimately illustrated in this special issue—comes not from reflecting at the burial site but rather from the rooms throughout the house. There’s the green shag carpeting and the faux waterfall, the tiki-style furniture bought as an ensemble out of a local furniture shop’s showroom display, the lightning bolt on the wall and the white porcelain monkey on the table. Also, there are the many televisions, more than a dozen, including three side by side. The TVs seem as if they were collected as a quintessentially American show of wealth and success—in the way that having an abundance of turkeys and geese signaled wealth in Tevye’s Russia. Elvis had an unapologetic appetite for the obvious.

On such a TV screen you might see Elvis, in the mid 1950s, in all his marvelous, hip-swiveling virility, belting out “Heartbreak Hotel” or “Don’t Be Cruel” or another in the sudden outpouring of hit songs that reframed popular music then and forever. And on another TV screen you might see him in the 1970s, bloated by all he had consumed, wearing that studded white jumpsuit, singing “Suspicious Minds,” perhaps, or Simon and Garfunkel’s “Bridge over Troubled Water,” sweat descending in rivulets down his changed familiar face, eyes closed, and still with that voice, deep and melancholy and free of constraint. Elvis at the start and Elvis to the end: beautiful, brilliant and true. 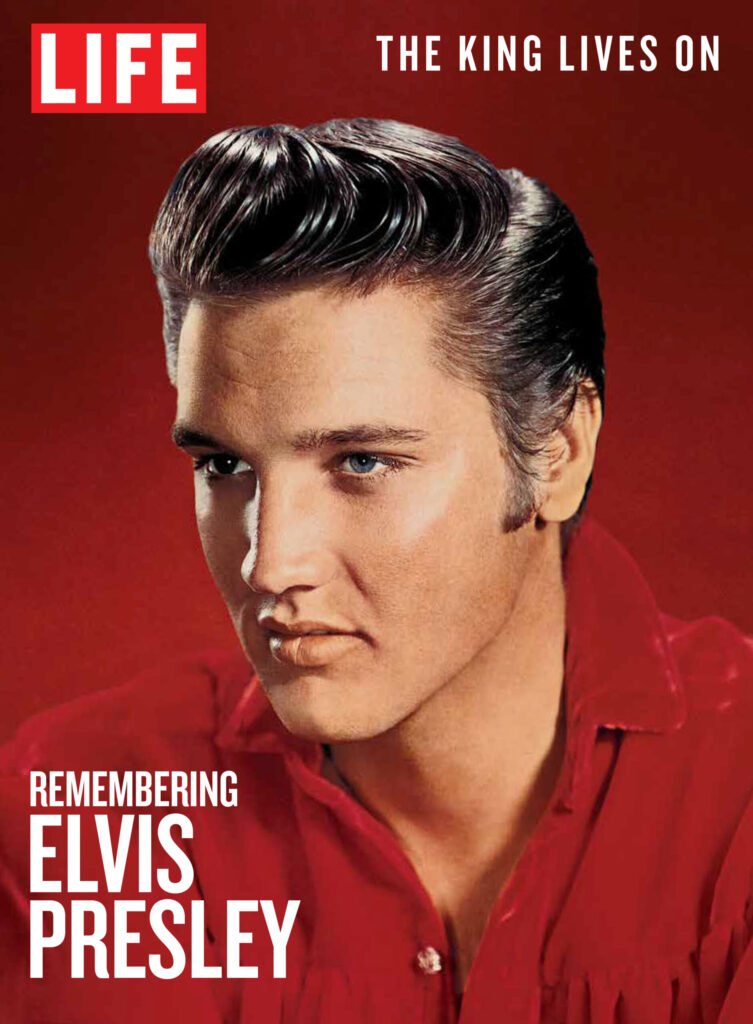 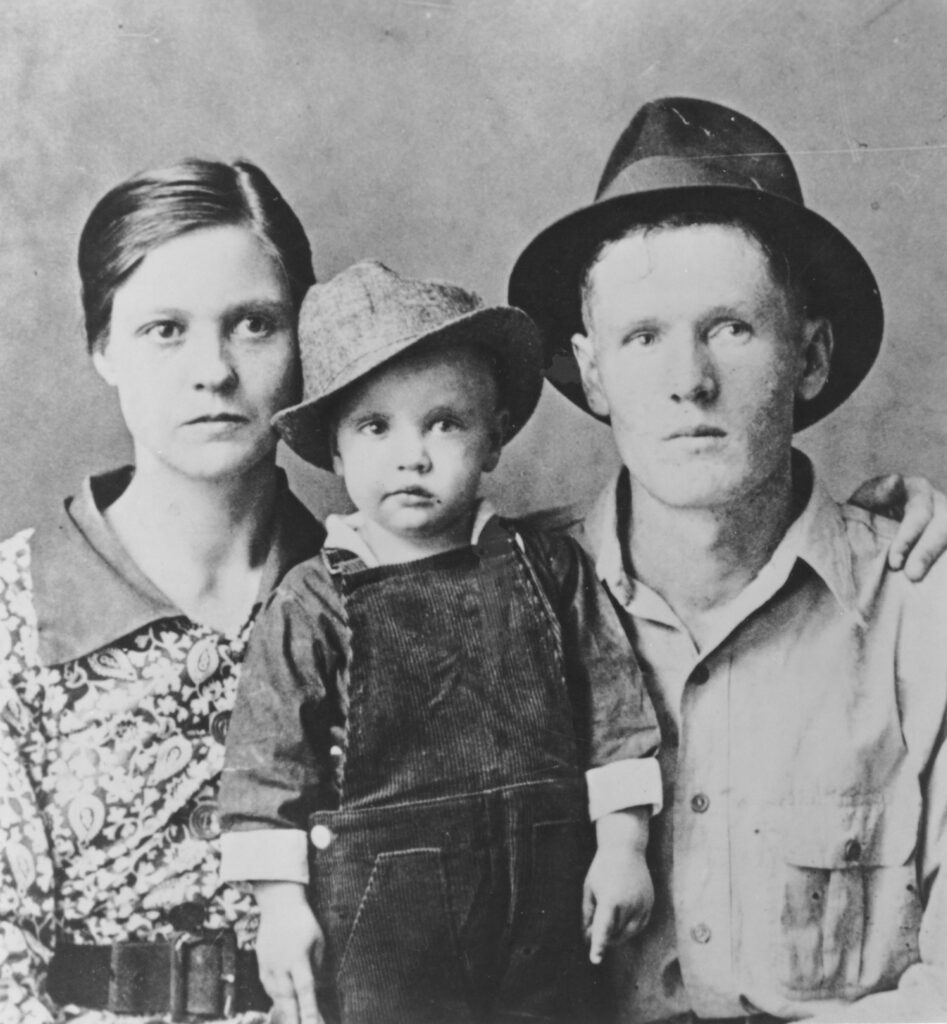 Elvis Presley with his parents Gladys and Vernon in Tupelo, Miss., 1937. 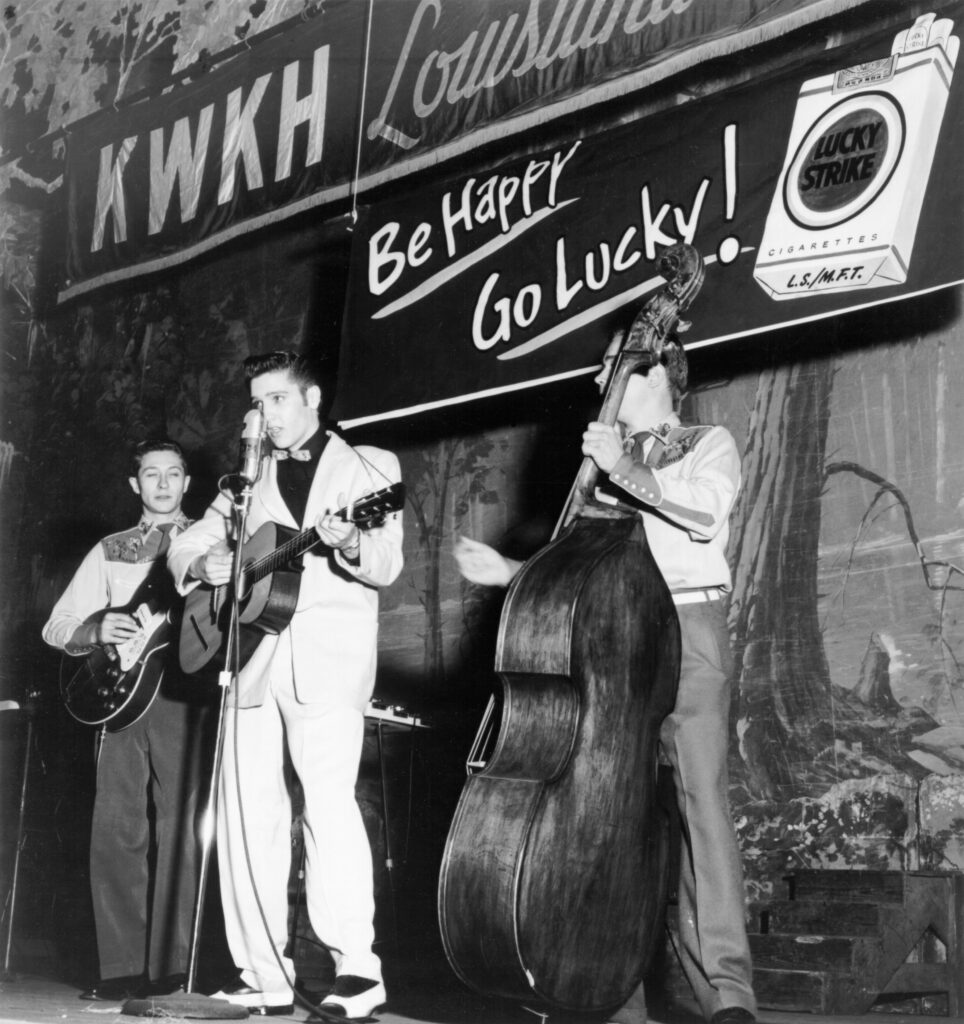 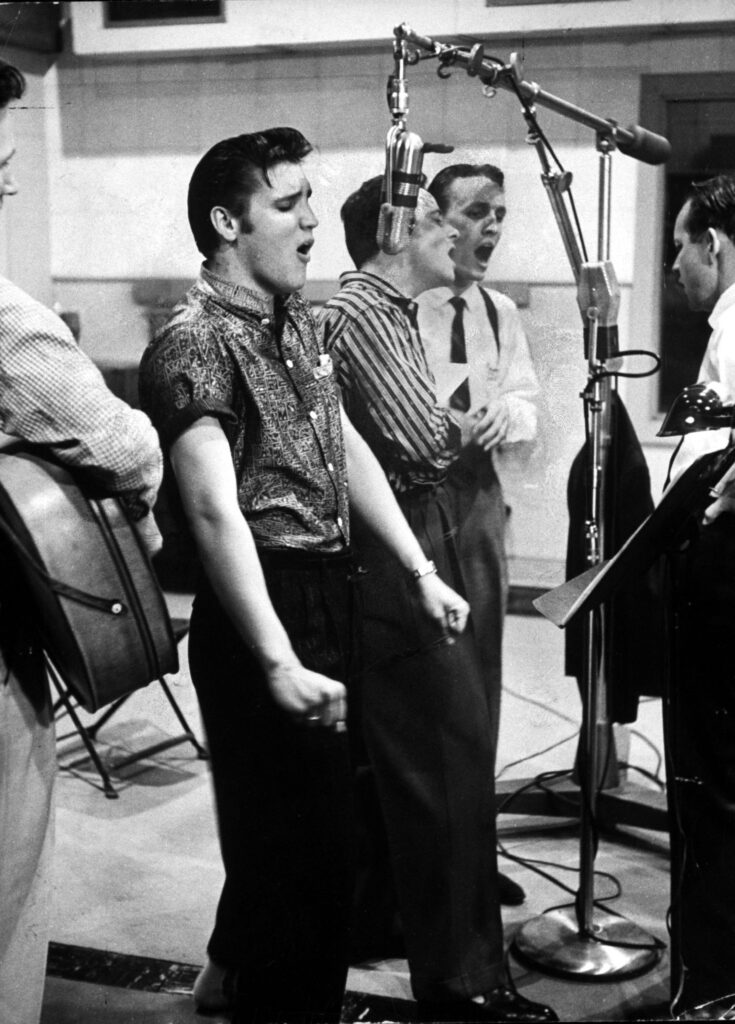 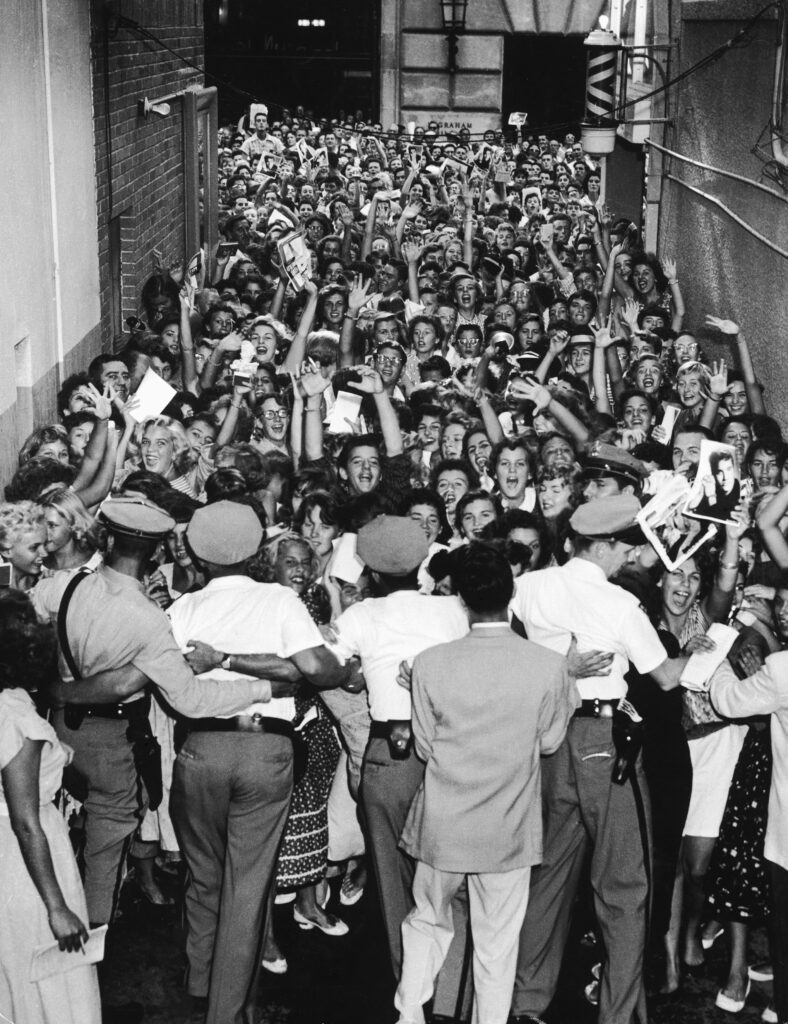 Elvis fans were restrained by police outside of a concert in Florida, 1956. 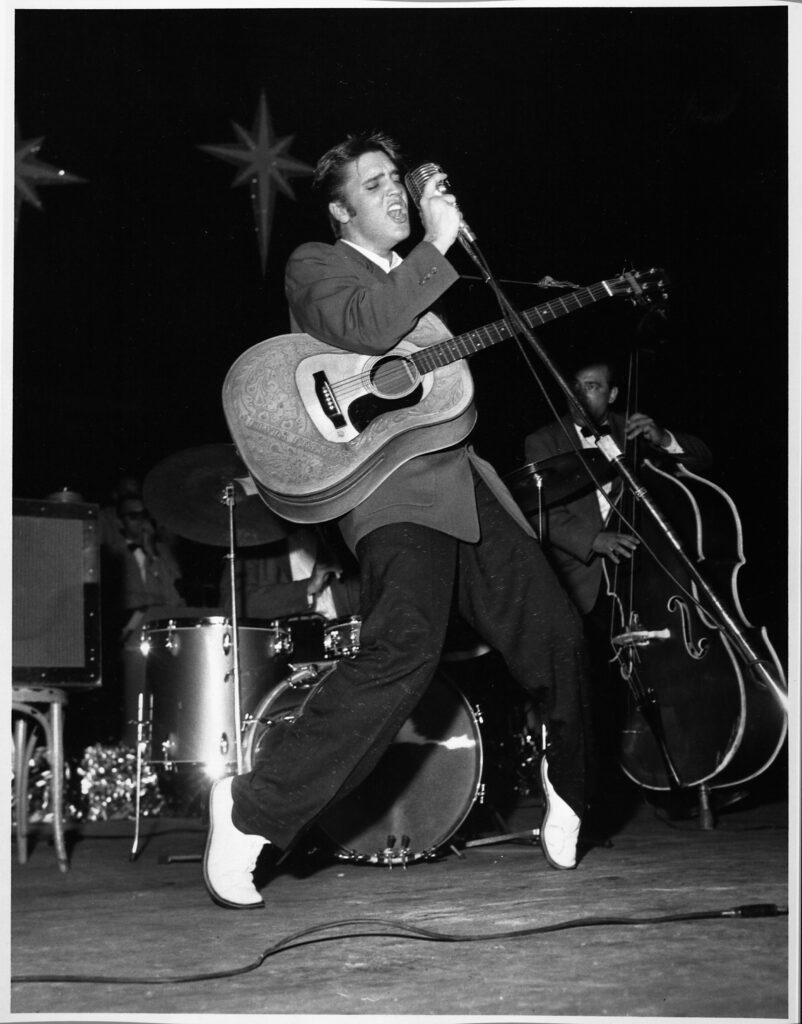 Elvis performed at the Olympia Theater In Miami, August 1956. 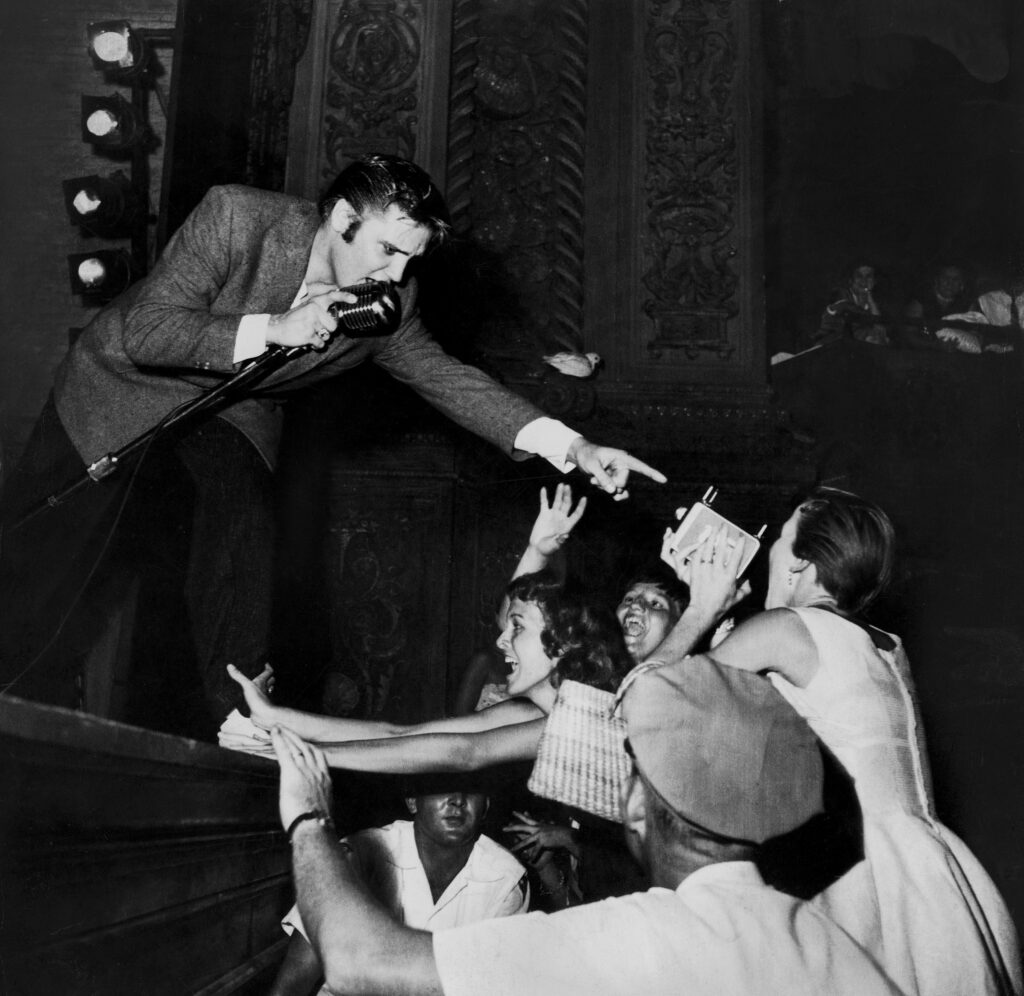 Elvis sang “Ain’t Nothin’ But a Hound Dog” at an August 1956 concert at the Olympia Theater in Miami. 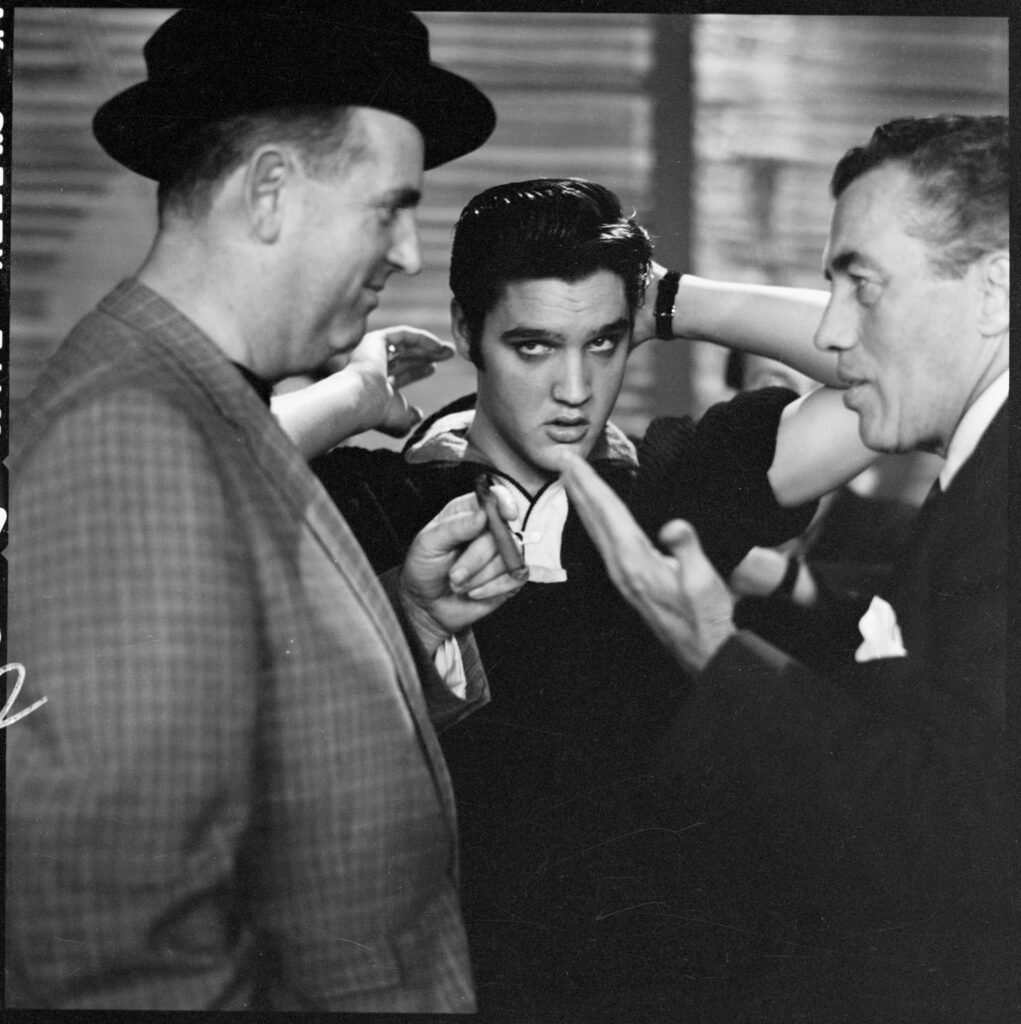 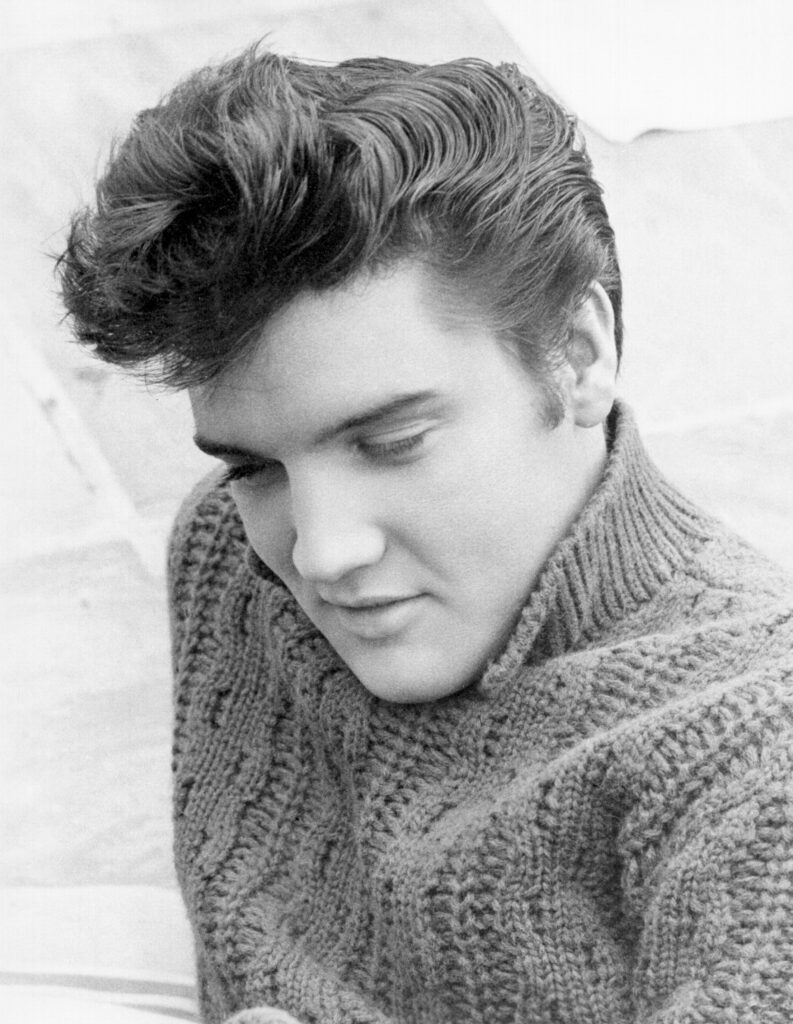 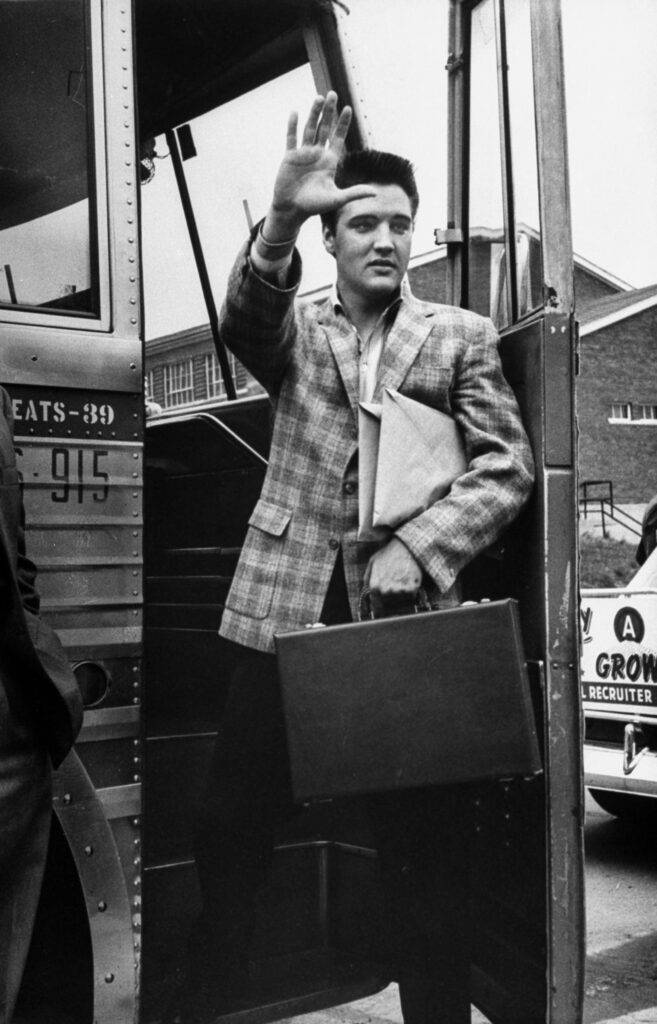 Elvis Presley waved goodbye to parents and friends as he boarded a bus to Ft. Chaffee following his induction into the Army, 1958. 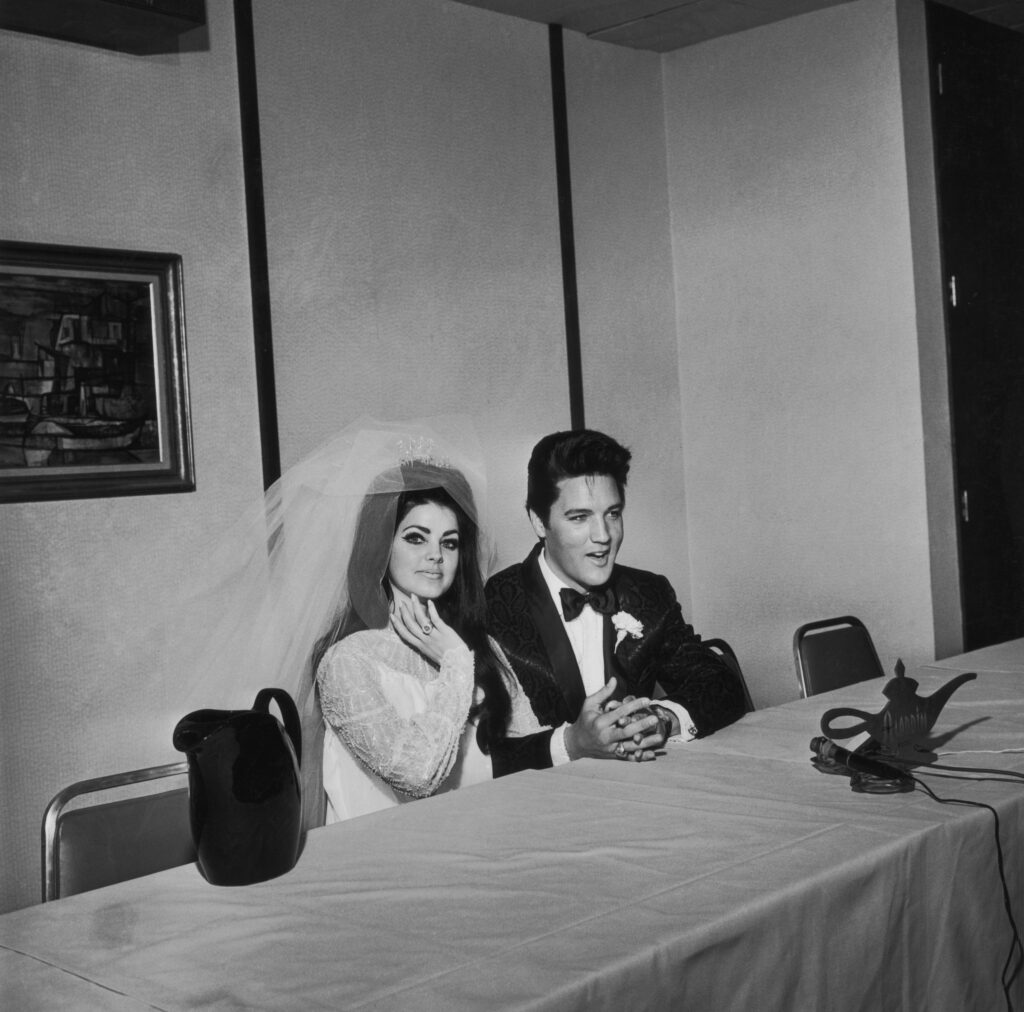 Elvis and Priscilla Presley on their wedding day, May 1 1967, at the Aladdin Hotel in Las Vegas. 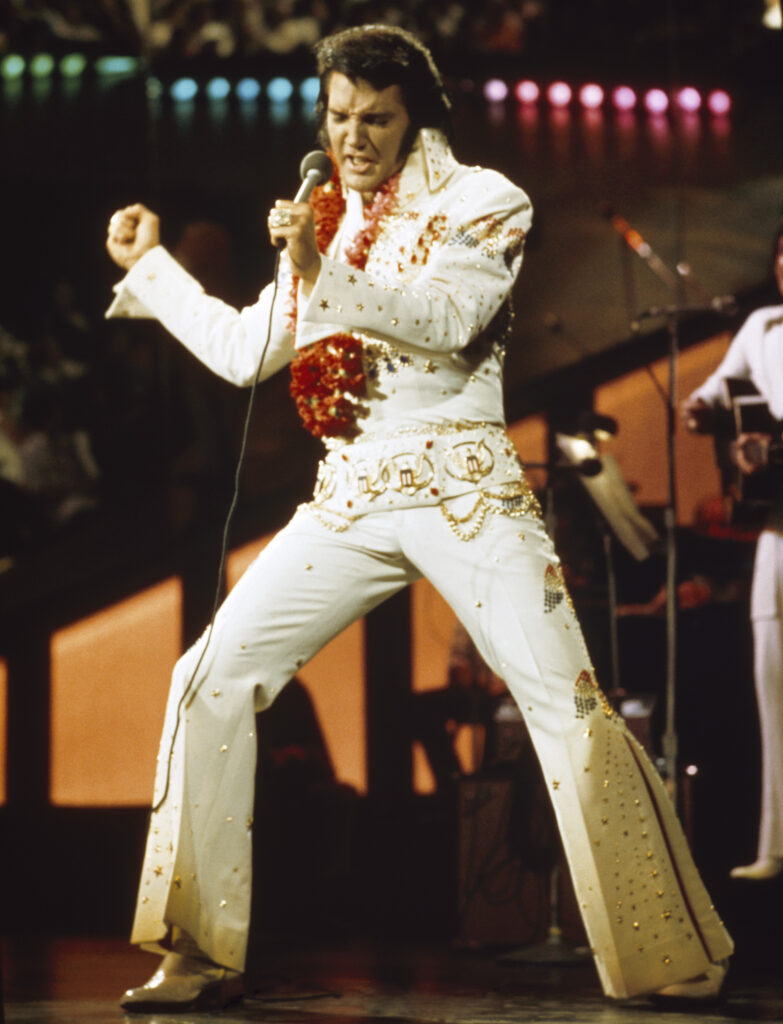 Elvis performed in his 1973 TV special Elvis: Aloha from Hawaii