In 1961, LIFE magazine managed to get every starting NFL quarterback, including six future Hall of Famers, in a studio for a group portrait. The photographer, Ralph Morse one of the most versatile photojournalists of the 20th century was never one to have his subjects just stand there and smile, so he asked Johnny Unitas, Bart Starr, Fran Tarkenton and the rest to, in effect, act like quarterbacks. The result is somehow ridiculous, charming and kind of cool, all at the same time.

The group portrait came about because Morse knew there was no way that he could follow 14 professional quarterbacks around the country individually the way LIFE’s sports editors wanted him to.

“Those editors were crazy,” Morse (now 96 years old) recently told LIFE.com. “One week I might fly to Dallas or St. Louis or Detroit to photograph one of the players, and maybe he’d be great. Or maybe he’d be awful. Either way, the assignment would take weeks months! and there was no guarantee we’d end up with what we wanted. The only way I could make a decent picture is if I made it in one place, at one time, with all of the players. I called the NFL commissioner, Pete Rozelle, and told him what I wanted to do. He said I was crazy. He told me they’d have to do it on their day off, and they’d never agree.

“So I said, ‘Look. You’re the commissioner, aren’t you? They’ll do what you tell them, won’t they?’ I suggested we do it in Chicago, somewhere in the center of the country. All they had to do was bring clean uniforms, and show up. We set a date, and I flew out to Chicago a week early to rent a studio. I had a local high school football team come to the studio every day for that week, and we practiced all sorts of scenarios until we had one that worked the guys in front tossing the ball underhand, the guys in back throwing overhand. We also set up a sheet of plexiglass with a hole cut in it for the camera lens to poke through, so I wouldn’t get creamed by 14 footballs coming at me.

“All the quarterbacks arrived on the scheduled day, and we had the whole thing figured out ahead of time. These guys were famous. They were busy. They didn’t want to mess around. They wanted to get into their uniforms, take the picture, get out of their uniforms and go. And that’s what happened.”

One thing worth noting here is that the great Y.A. Tittle (front row, far right), who was playing for the New York Giants at that point in his career, was 35 years old when the photo was made. Old for an NFL quarterback, sure but he looks like he’s 65.

One hell of a player, though; he’s one of just 11 Giants to have his number retired. He’s also one of six future Hall of Famers in Morse’s photo; the others are Layne, Starr, Unitas, Tarkenton and Jurgenson.

Ben Cosgrove is the Editor of LIFE.com 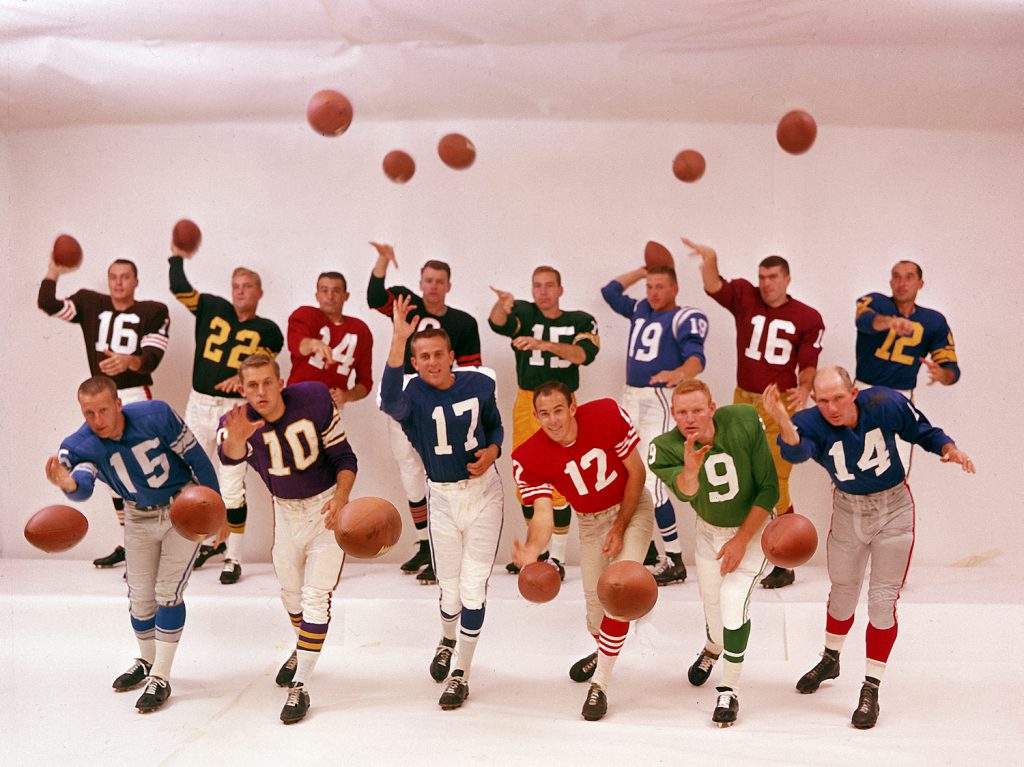