Jane Fonda’s appearances in LIFE magazine from 1960 to 1971 track the transformations of an actress finding her voice.

Fonda, born on Dec. 21, 1937, was pictured alongside her famous father when she made the cover of LIFE for the first time in the Feb. 22, 1960 issue. Henry Fonda had starred in such films as The Grapes of Wrath and Twelve Angry Men, among dozens of others, and LIFE heralded Jane’s joining the family business with a fanfare that was positively Olympian: “Like an ancient goddess who was born full-grown out of her father’s head, Jane Fonda at 22 has sprung up almost magically as a full-fledged and versatile actress.”

The line was a reference to Greek mythology which cast Henry Fonda as Zeus and Jane as Athena. It was a lot to live up to. At that point Jane was just making her film debut in a 1960 romantic comedy called Tall Story. Jane played a cheerleader; her costar was Anthony Perkins, best remembered for his performance as Norman Bates in Psycho, released that same year. Tall Story made more of a thud than a splash.

But in 1964 Jane Fonda was featured in LIFE again, when she was in France to film Circle of Love, directed by Roger Vadim. Fonda didn’t make the cover then, but the magazine still gushed in the headline over “Henry Fonda’s lovely, leggy daughter.” The story continued in that frothy vein: “The girl’s look—soft, wheaten-blond hair, a dazzling smile, lovely long legs—is emphatically American and it is a look that knocks Frenchmen dead.”

Fonda let the world know she was all grown when she was back on the cover of LIFE for its March 29, 1968 issue, which trumpeted her performance in the outlandish cult classic Barbarella. (Watching the original theatrical trailer for the movie feels like a piece of sci-fi time travel itself). LIFE’s story on the actress paid much attention to the movie’s director, Vadim, who was now Fonda’s husband. He had previously been married to actress Brigitte Bardot, whom he had directed in And God Created Woman, and another actress, Annette Stroyberg; Vadim also had a child with French screen star Catherine Deneuve. LIFE wrote of Fonda’s union with the director: “She is caught up in an absorbing marriage with Vadim, whose reputation has him more knowledgeable in matters sexual than Kinsey, Freud and Krafft-Ebing, due partly to his many spectacular wives and partly to the films that he makes.” The story also discussed fissures in Jane Fonda’s relationship with her father, with who she was not speaking at the time. (They would later appear together in the 1981 film On Golden Pond, earning an Oscar for him and a nomination for Jane).

The April 23, 1971 cover of LIFE marked the first big story in which the magazine presented Jane Fonda chiefly on her own, rather than in relation to her father or her husband. The cover proclaimed her a “busy rebel” and the story focussed on her newfound activism, opening with this sly sentence: “When her estranged husband, French director Roger Vadim, called her Jane d’Arc, Jane Fonda didn’t smile.”

LIFE greeted Fonda’s political awakening with something less than enthusiasm (and this was before her controversial trip to Vietnam that gave her the nickname Hanoi Jane). The story was headlined “Nag, Nag, Nag,” and reported, “The Hollywood Women’s Press Club gave her its annual Sour Apple Award (for giving the industry a “sour image)” and some say her activities played a part in her failure to get an Oscar for her performance in They Shoot Horses, Don’t They?”

The magazine that had not too long ago swooned over her appearance now noted snarkily, “Long a member of the worst-dressed list, she has reduced her wardrobe to little more than two sweaters and two pairs of jeans, which she carries in a Louis Vuitton bag.”

Fonda’s transformation from ingenue to activist over the course of the 1960s was only the beginning of a fascinating evolution that defies easy summation. In the 1980s Fonda reinvented herself as the country’s leading workout guru, with her exercise videos topping the charts for six years. The outspoken critic of capitalism, after being married to progressive activist Tom Hayden for 17 years, followed that up with a ten-year marriage to media titan Ted Turner (they divorced in 2001).

The most consistent through-line is her acting, which continues fruitfully. She currently costars with Lily Tomlin in the Netflix series Grace and Frankie, which has earned her award nominations and whose seven-season run is set to conclude in 2022. 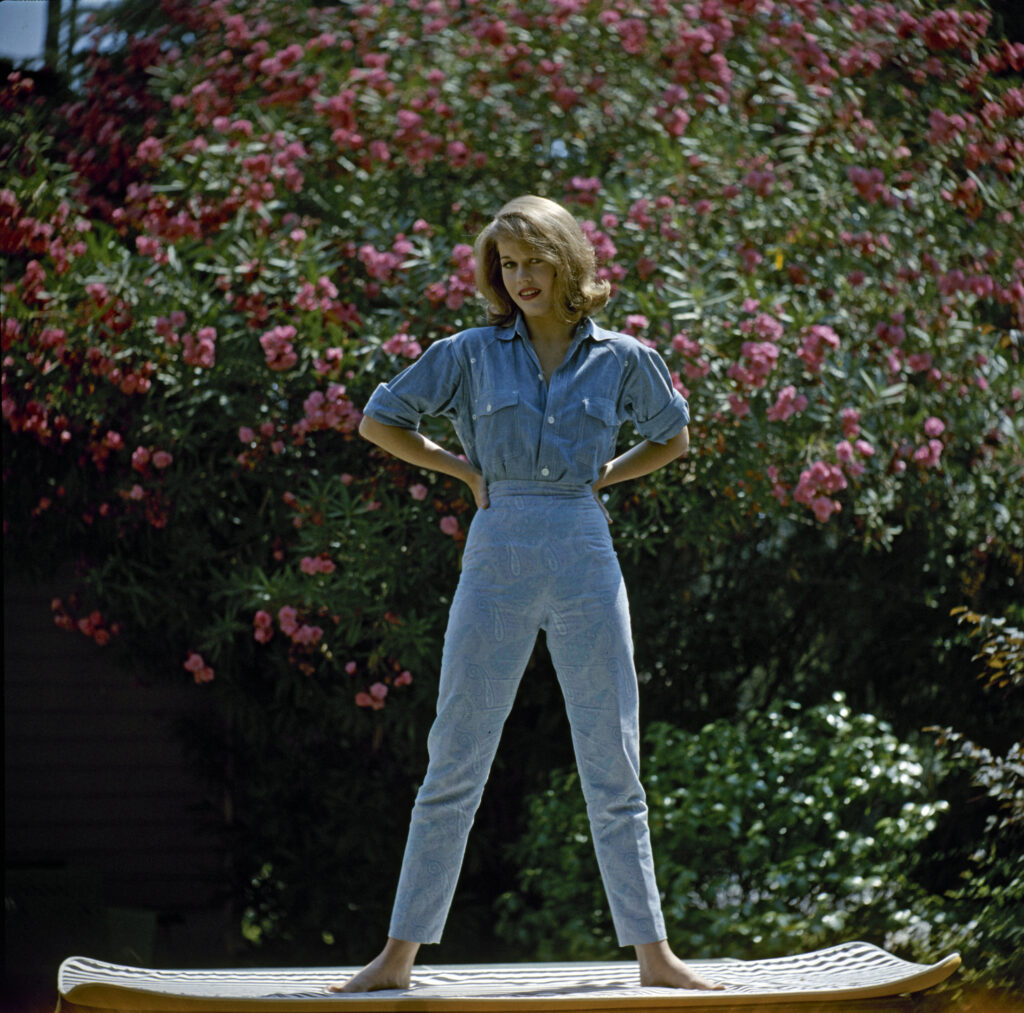 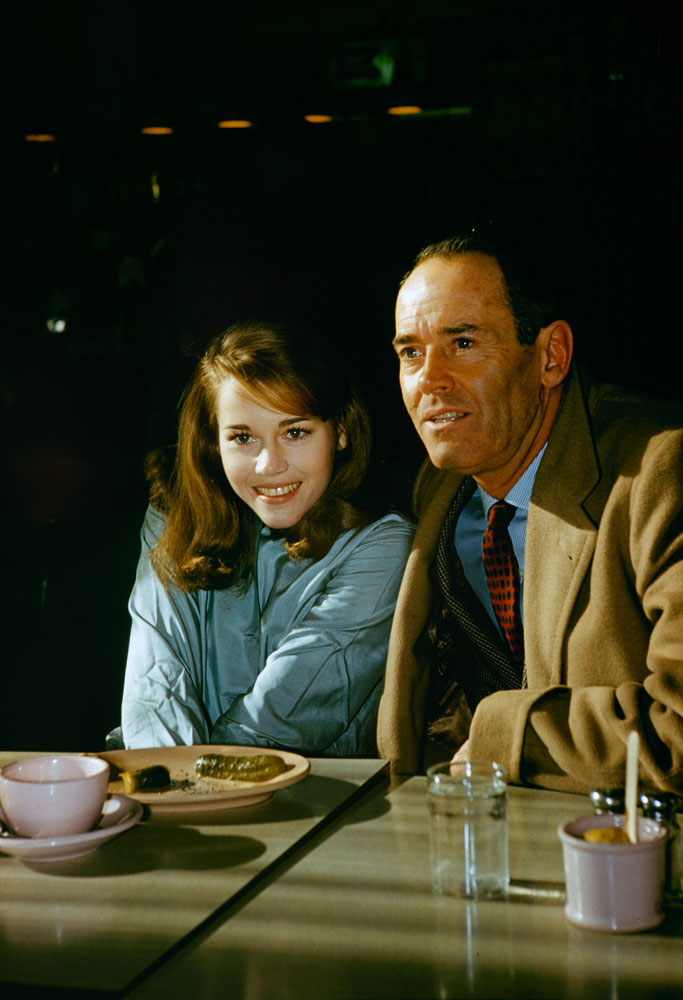 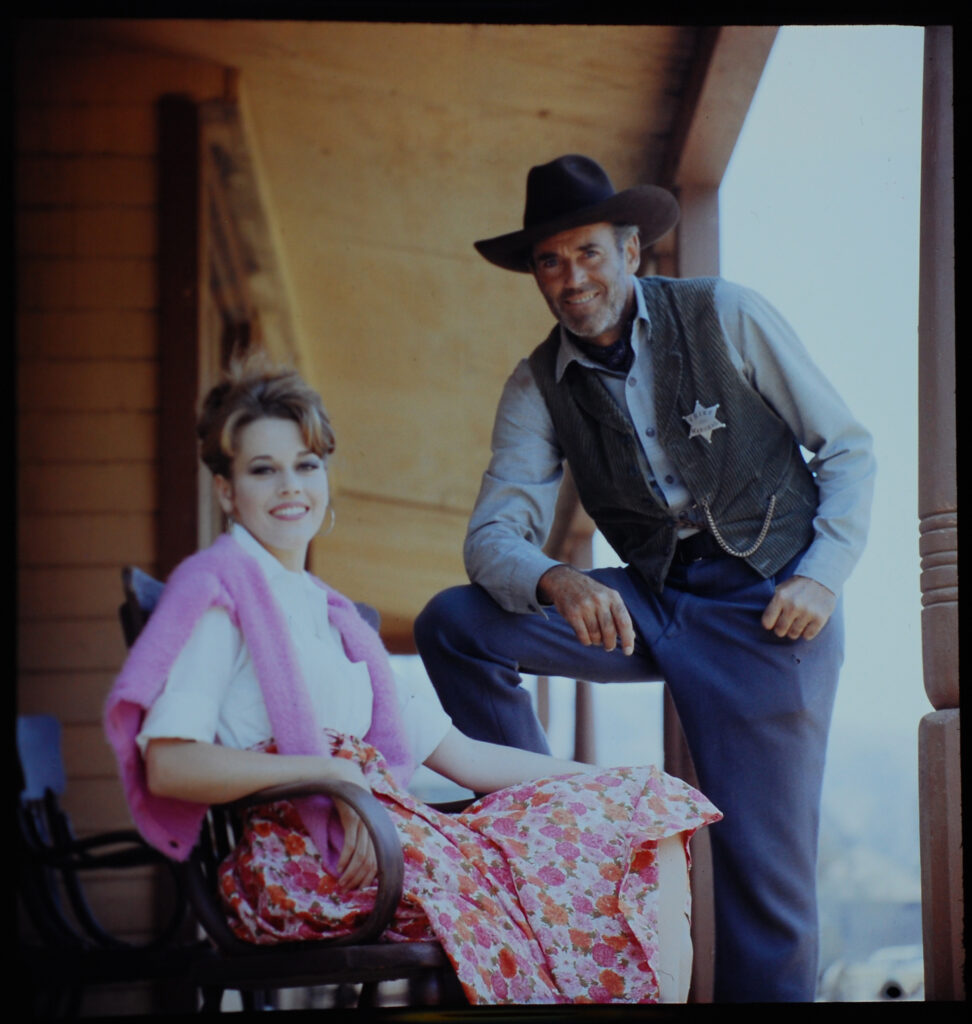 Jane Fonda with her father Henry Fonda on the set of Henry’s television show, ‘The Deputy’, circa 1960. 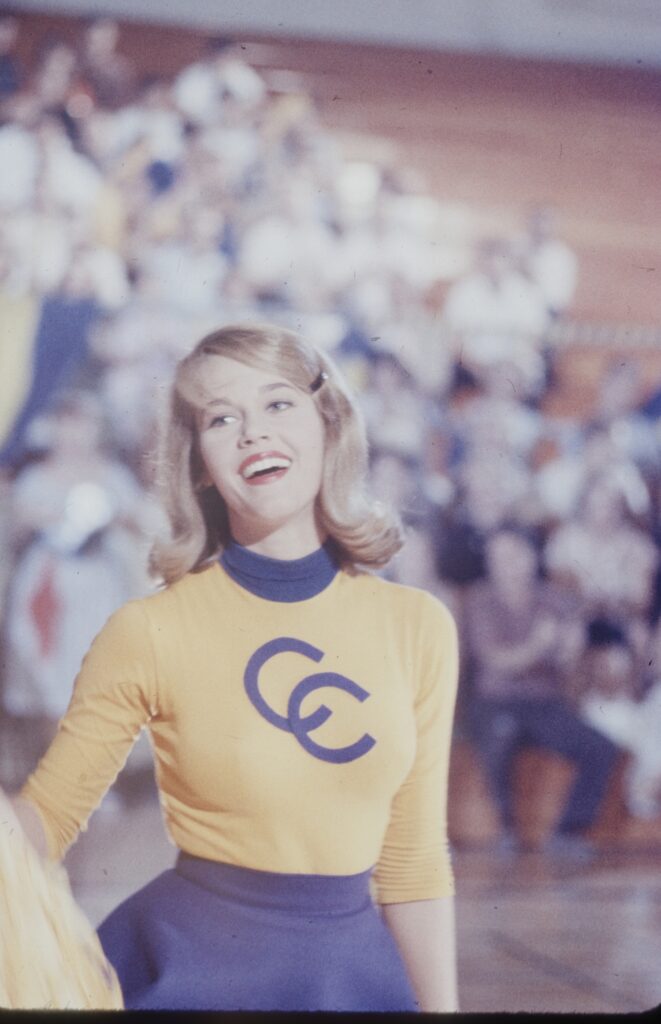 Jane Fonda in cheerleader costume she wore for her film debut in the movie “Tall Story,” 1960. 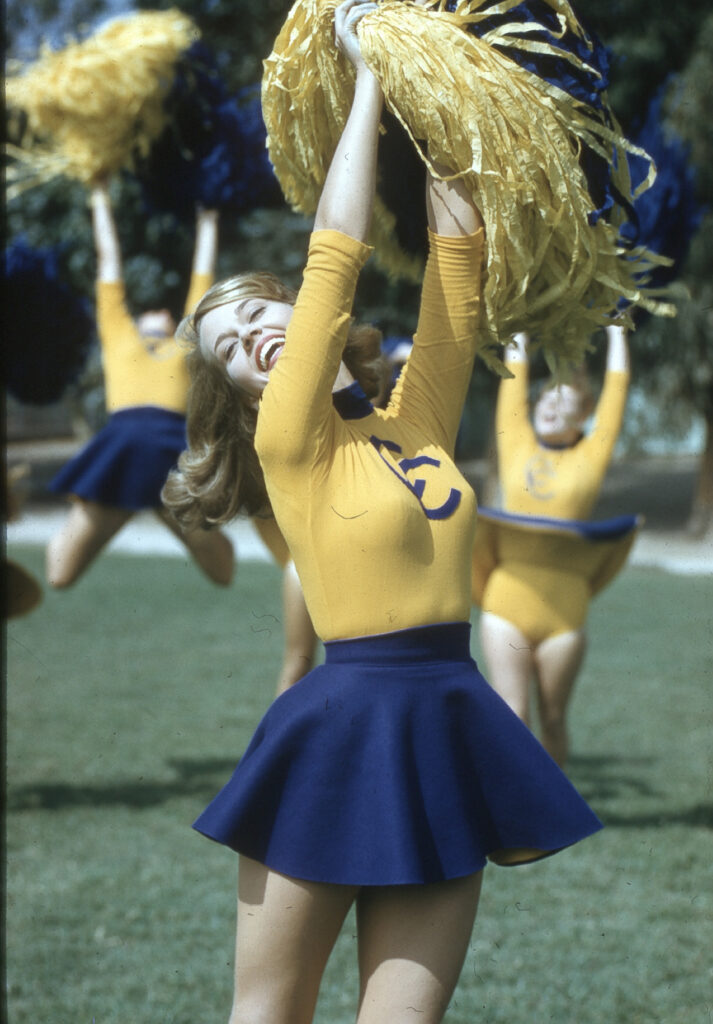 Jane Fonda played a cheerleader in her film debut, the 1960 movie ‘Tall Story’. 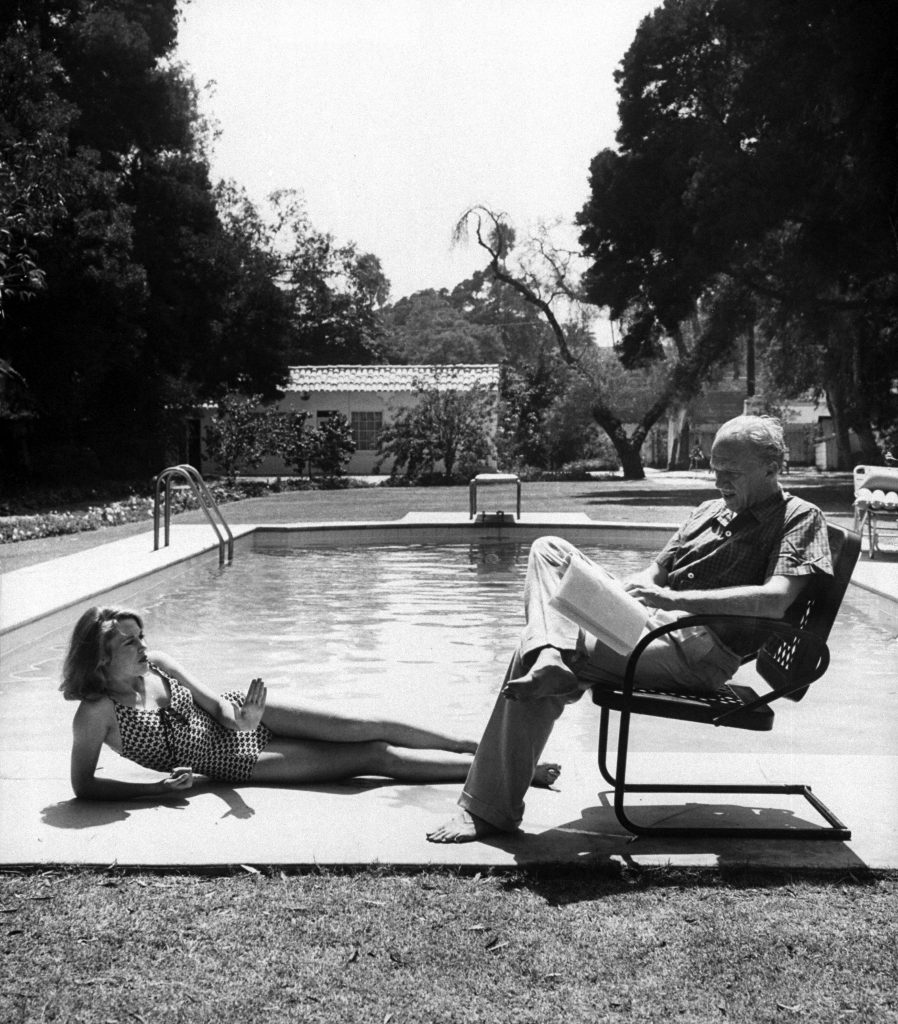 Joshua L. Logan, who directed Jane Fonda’s film debut Tall Story and was also a family friend, studied a movie script with her, 1959. 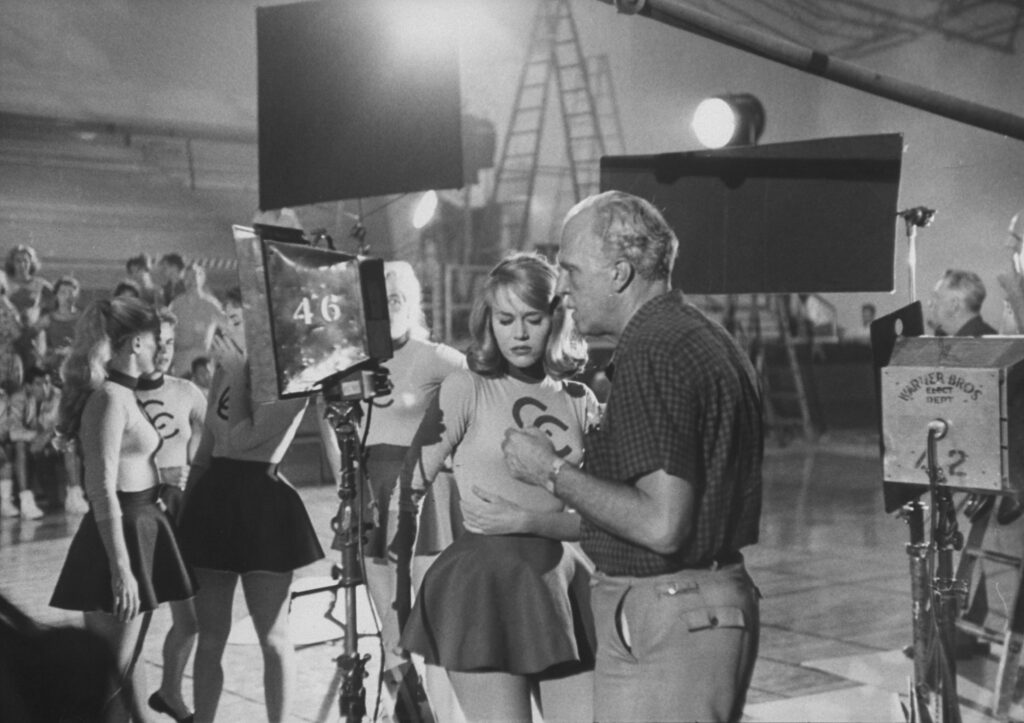 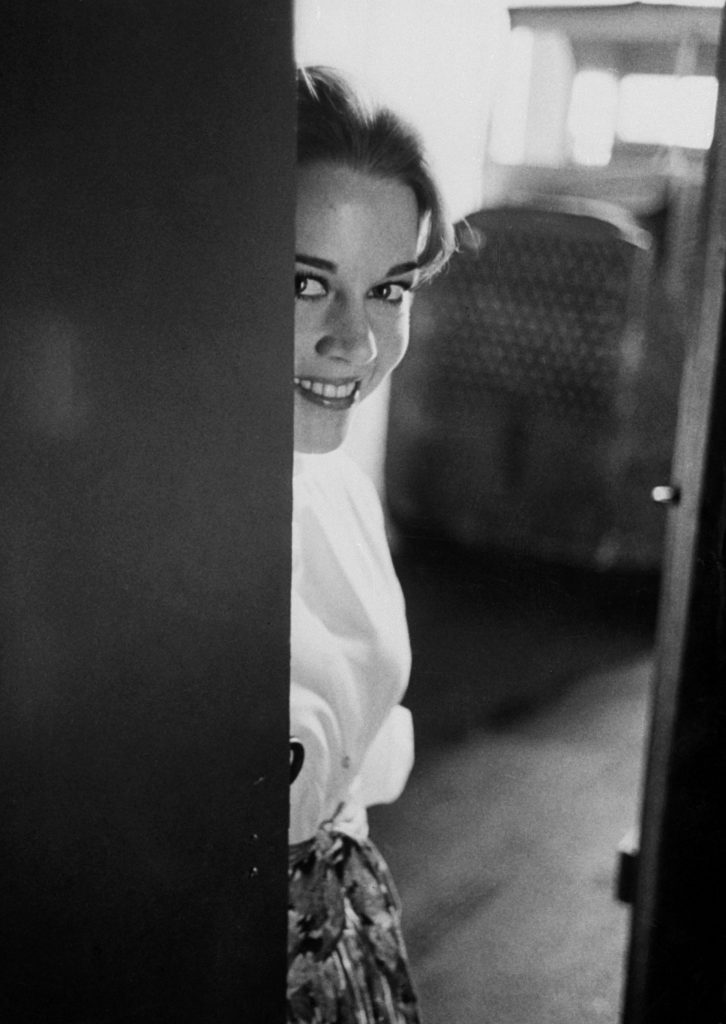 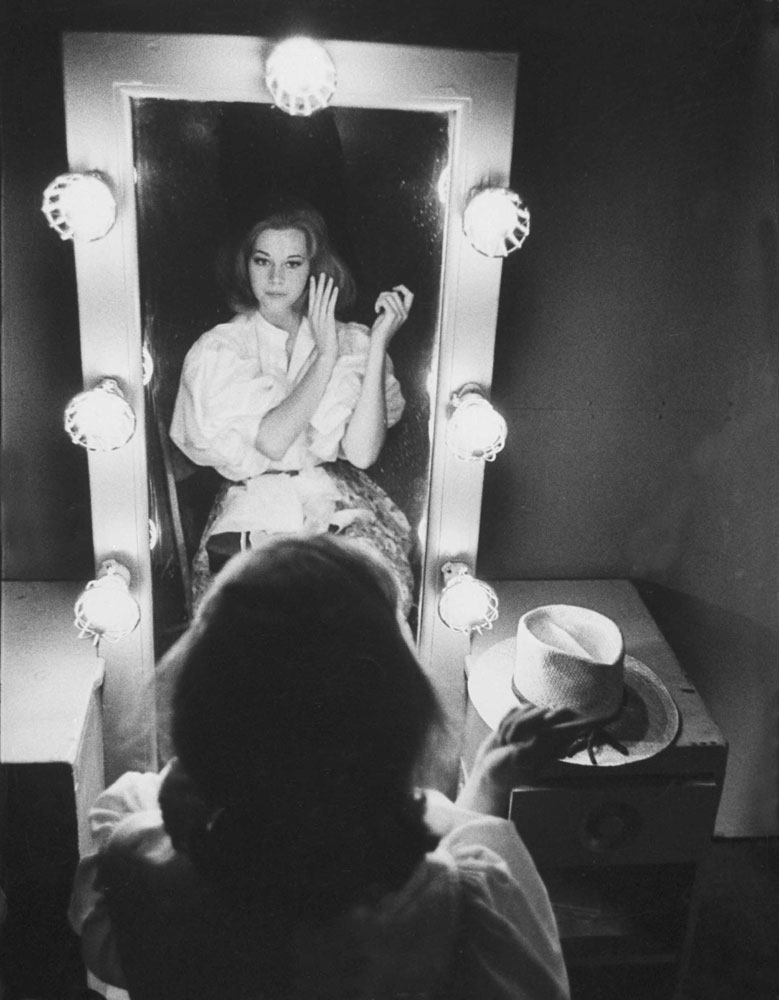 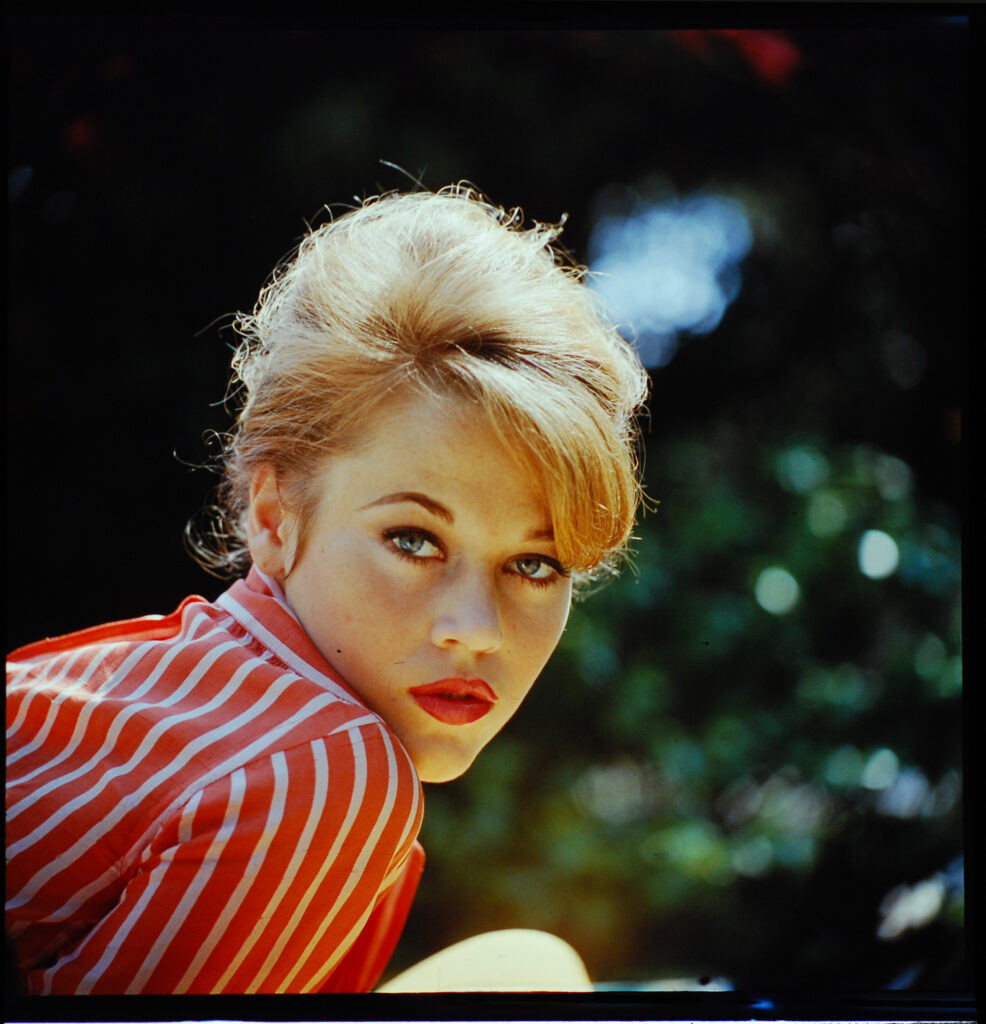 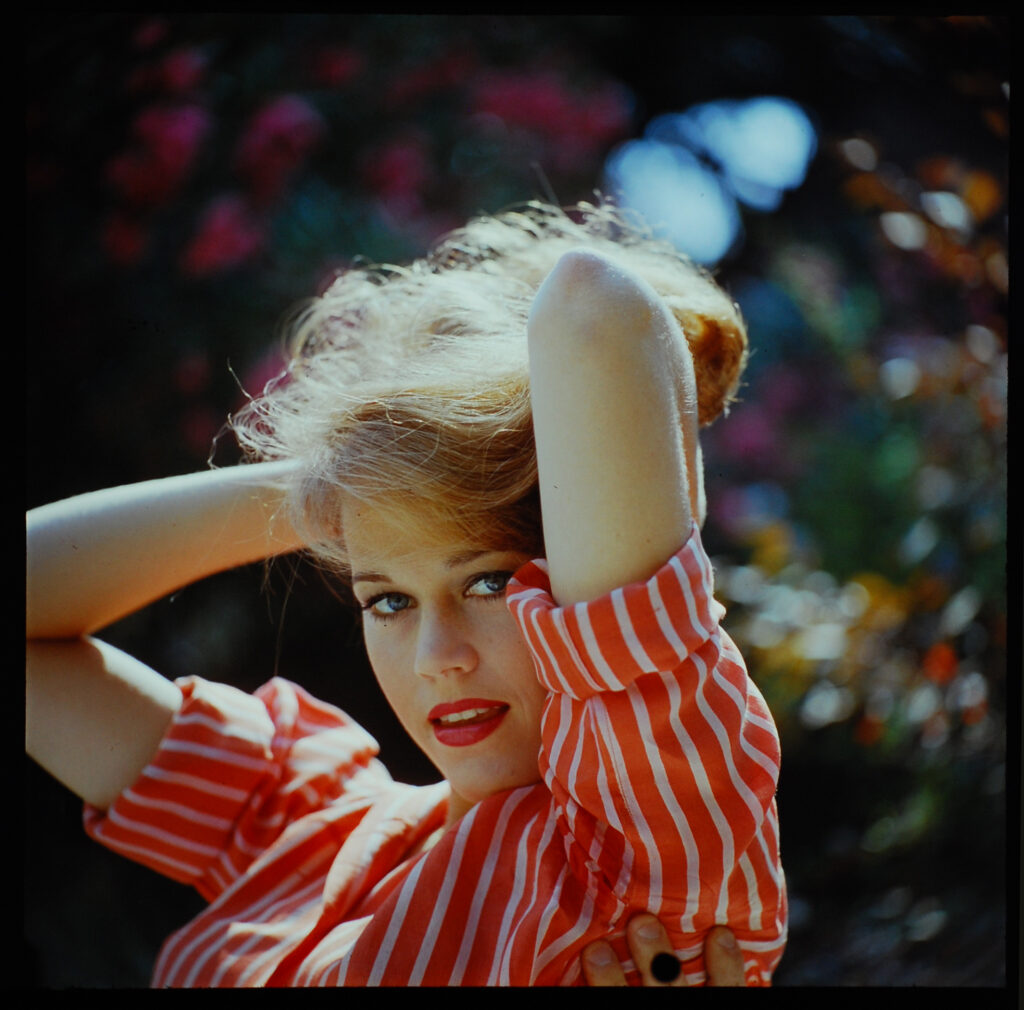 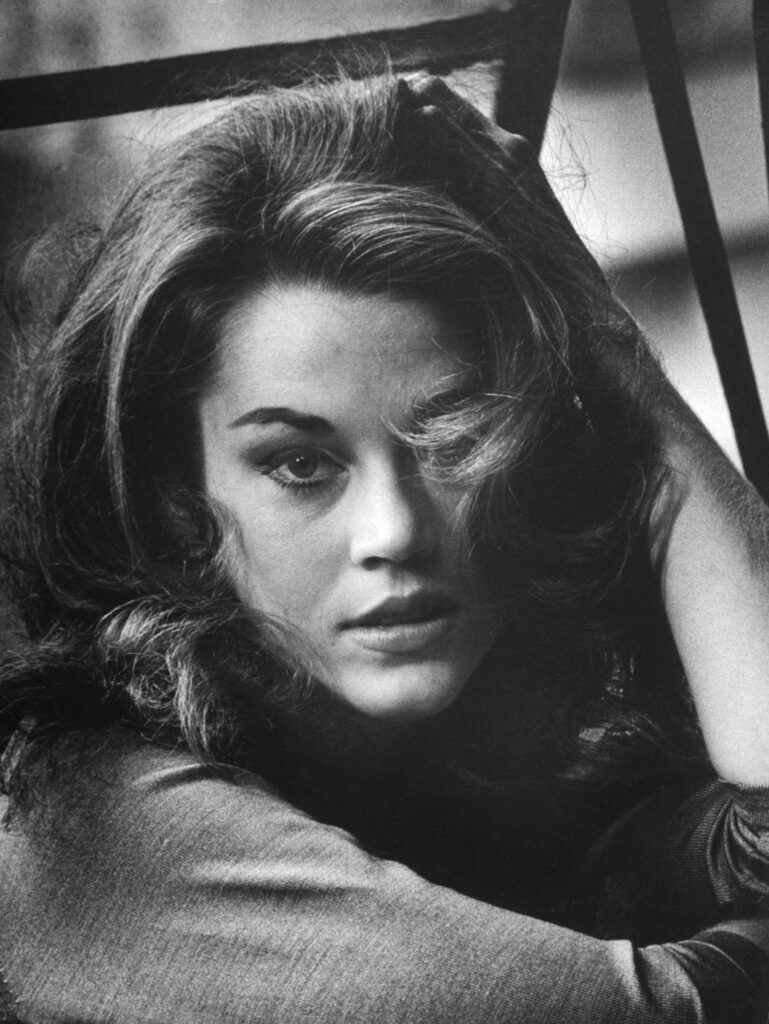 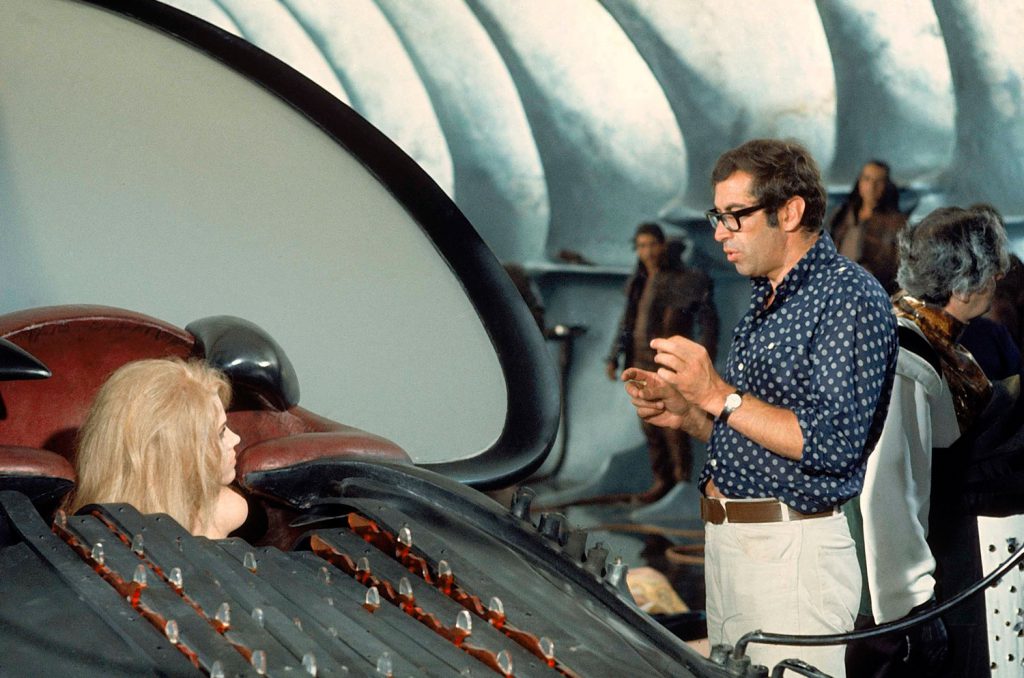 Jane Fonda ensconced in the “excessive machine” on the set of Barbarella, 1968. At right is her husband, the director Roger Vadim. 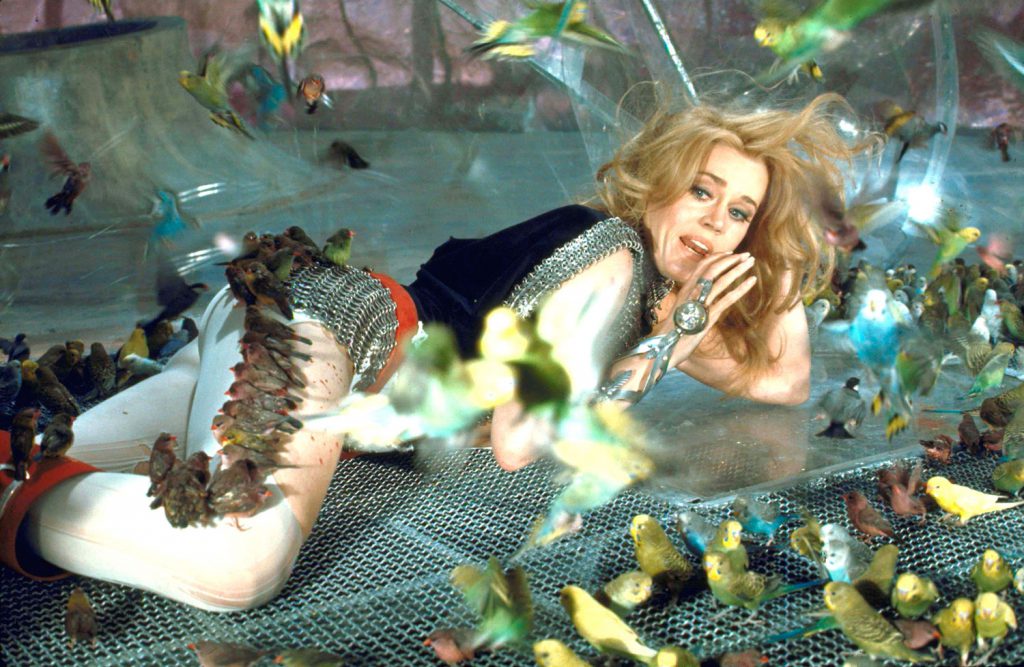 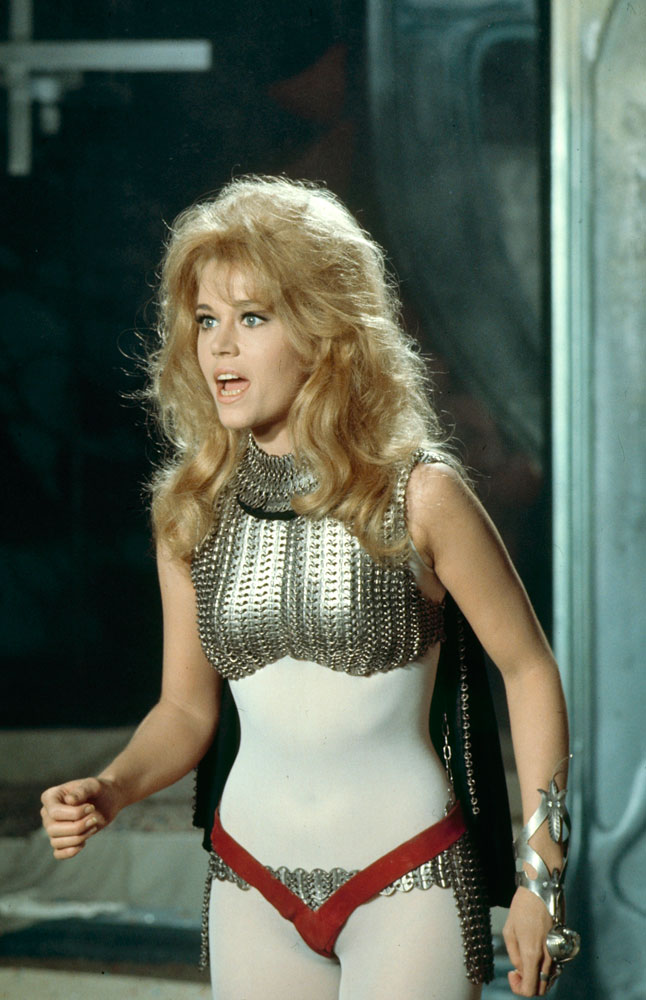 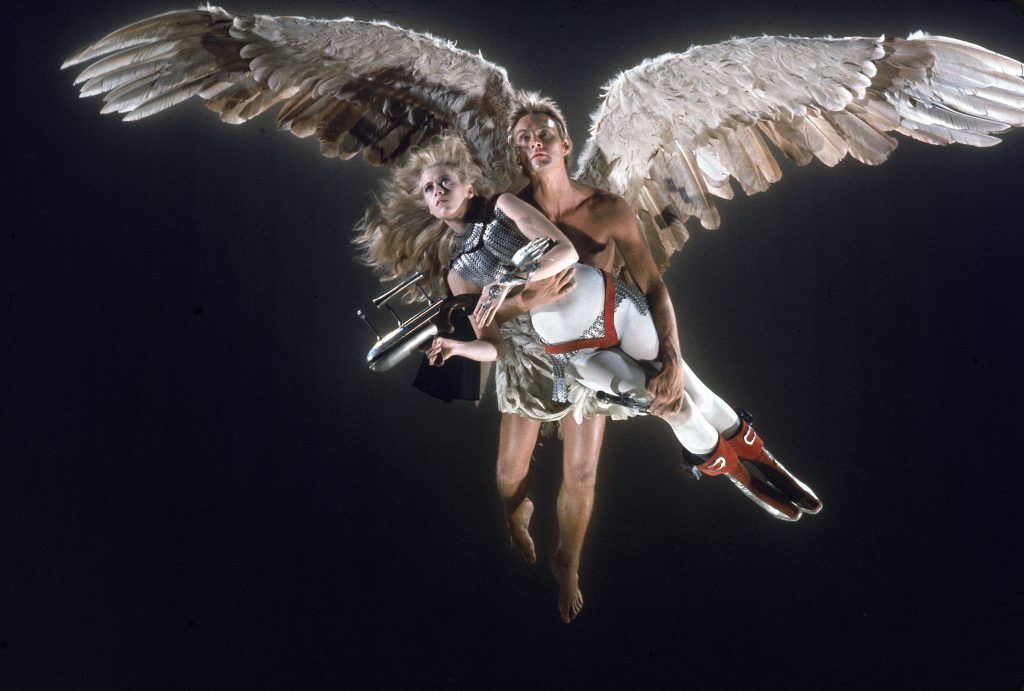 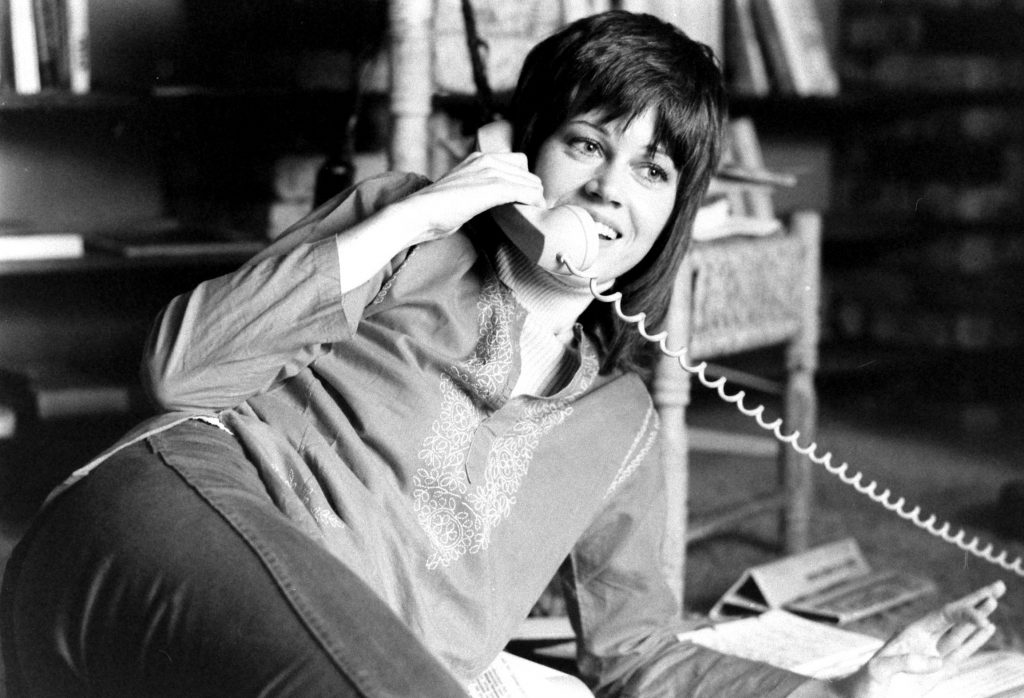 Jane Fonda, photographed for a story about her activism, 1971. 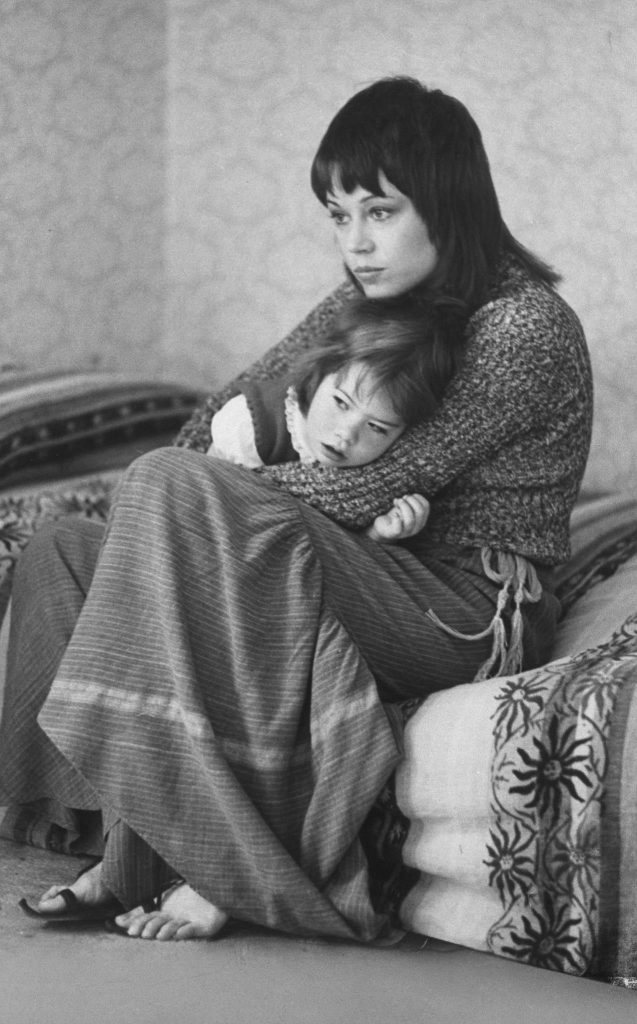 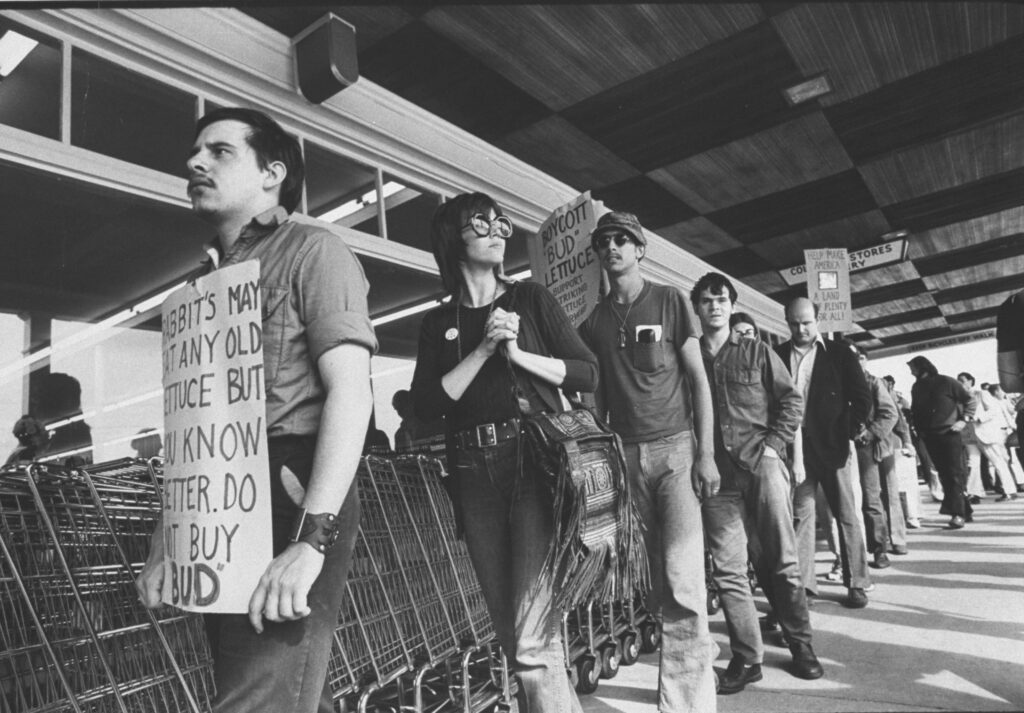 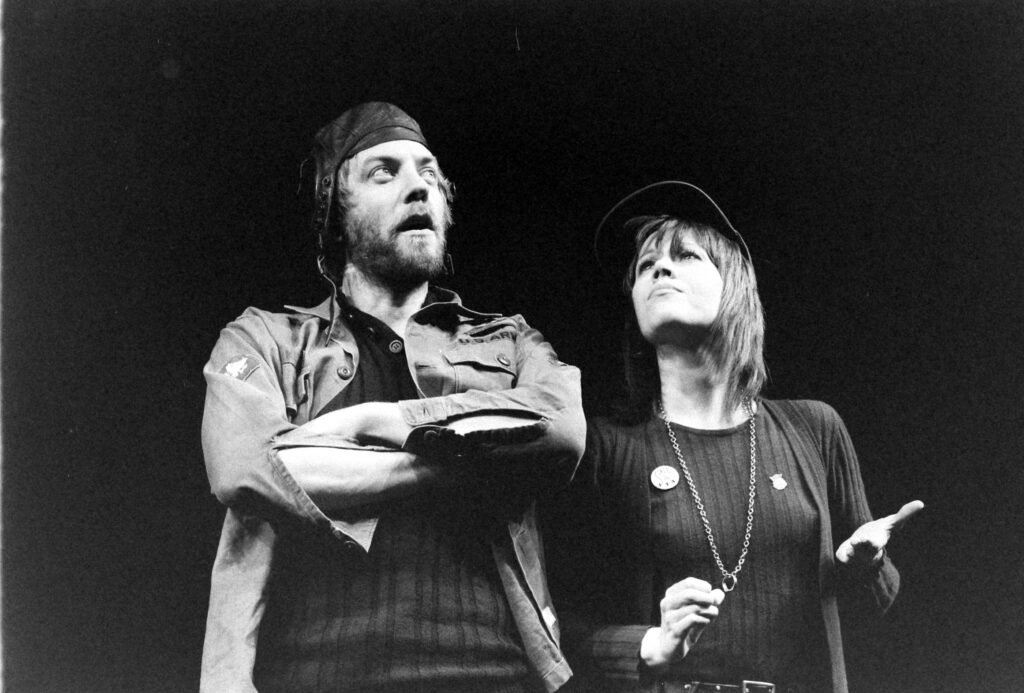 Jane Fonda appeared at a rally against the Vietnam war with with actor Donald Sutherland, her costar in the movie Klute. 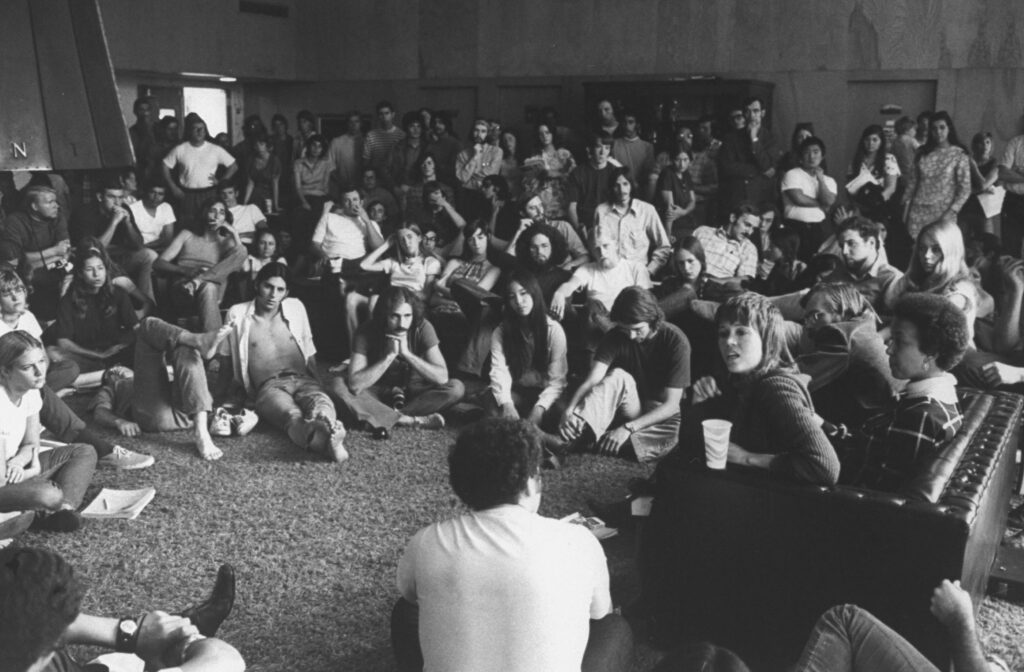