Jaws: The Shark Movie That Changed the World

The dorsal fin of the great white shark terrified Jaws audiences even as it drew them to the theater like never before.

The following was adapted from Richard Jerome’s introduction to LIFE’s brand new special issue Jaws: The Shark Movie That Changed the World.

Forty-five years ago, in the summer of 1975, Steven Spielberg’s Jaws transformed the Hollywood landscape, sparked a cultural phenomenon, and took a huge bite out of the collective psyche. Visually compelling and augmented by an iconic musical score, the adaptation of Peter Benchley’s novel about a great white shark terrorizing a beach resort was a masterpiece of the thriller genre. From the movie’s opening moments, when a young woman gets devoured while taking an evening skinny-dip, Spielberg—just 27 when he made the picture—grabs us and never lets go. “I went to the third public screening in Hollywood, and the whole audience jumped as one when the girl was yanked under by the shark,” recalls film historian and screenwriter Joseph McBride, author of Steven Spielberg, A Biography. “It was like a wave. The only comparable experience I’d had was while working as a vendor at Milwaukee County Stadium on November 24, 1963, the day Lee Harvey Oswald was shot. I was walking through the stands and everybody had these portable radios and the news came rippling through the stadium.”

Jaws would become history’s highest-grossing film (eclipsed in 1977 by Star Wars), but it’s remarkable that it ever got made in the first place. The shoot on Martha’s Vineyard—directed by a rising but relatively unknown young filmmaker—was notoriously arduous,  not least because the elaborately designed mechanical sharks used for the title character constantly malfunctioned. As it turned out, those snafus made Jaws a better film. The villain doesn’t even make an appearance until 81 minutes into the picture—in the tradition of Alfred Hitchcock and other masters of suspense, it was the idea of the shark, the unseen menace lurking in the depths, that had audiences grabbing their seats. “[Jaws producer] Richard Zanuck told me back in the ’90s that if you made the film today, they would have used CGI and it would be stupid and unreal,” McBride says. “It would all look like a cartoon, what they would do is have the shark do all sorts of stunts. I actually saw the storyboards they’d done for Jaws, and it showed the [mechanical] shark jumping and doing all kinds of tricks. Spielberg was thin ing of doing that . . . [but] he later realized that what made the film work was you didn’t see the shark very much.”

“I think Sid Sheinberg [then head of Universal Pictures] always blocked the intention of Ned Tanen [the studio’s production chief] to fire me,” the director told Entertainment Weekly decades later. “Dick Zanuck and [coproducer] David Brown always told me that the other shoe was about to drop. They always warned me. And they didn’t warn me to threaten me or to intimidate me, they just said, ‘Is there anything you can do with the script, with the schedule, to avert a shutdown? What can you do?’ And I didn’t have anything to do, because I couldn’t cut the script . . . I had to just keep moving forward, and the schedule was dictated by the mechanical shark, and by the weather conditions on the ocean. That’s what dictated the overrun. And I think every time there was an intention to replace me, Sid stepped in quietly behind the scenes and stopped it from happening.”

Perhaps, but Carl Gottlieb, who wrote the shooting script for Jaws and played a small acting role, credits the director’s business acumen, as well as his cinematic talents, for the film’s survival and monster success. “Steven had a superb sense of camera, in spades; he was very assured of his directorial vision—and he was also a consummate player of studio politics,” says Gottlieb, whose book The Jaws Log is a vivid account of the production. “He knew how to get executives to kind of see things his way and was also very aware of budget and schedules. He could carry it all in his head. Steven was quite the wunderkind.” The industry took notice: Jaws earned an Academy Award nomination for Best Picture and took home three Oscars, for film editing, sound, and John Williams’s score.

On the business, side, Jaws, released on June 20, 1975, was one of the first “summer blockbusters.” Traditionally Hollywood studios saw those months as a dead zone, fit for a diet of low-budget B-grade cheese. One reason was that movie houses were just plain hot—who wanted to sweat for two hours or more in a leather or otherwise upholstered seat? By the late 1960s, however, more and more theaters were air-conditioned, which no doubt played a part in the summer release of Bonnie and Clyde in 1967, Easy Rider in 1969, and American Graffiti in 1973. When Jaws hit screens, multiplex cinemas were proliferating around the country, many of them in air-conditioned shopping malls—which were soon swarming with teens and tweens, a mine of potential moviegoers. Today, some 40 percent of Hollywood’s annual box office revenue comes from summer releases.

It’s difficult to believe now, but Jaws was also the first Hollywood movie to be aggressively advertised on television. For three nights leading up to the movie’s premiere, Universal flooded all three major networks with half-minute- long trailers. The campaign cost about $700,000—not a bad investment for a property that quickly passed a record- busting $100 million at the box office and eventually grossed $260 million in the domestic market alone. (The studio spent $1.8 million total in pre-opening advertising, an unheard of amount at the time.) Jaws spawned three sequels and innumerable knockoff flicks about man-eating animals. It also inspired a fascination with sharks—as well as an unwarranted fear that led to a frenzy of overfishing and wreaked profound ecological consequences.

For two generations of film fans, of course, Jaws may be most notable for unleashing the juggernaut known as Steven Spielberg. The director, now 73, is a Hollywood institution, with a résumé including E.T. the Extra-Terrestrial, Close Encounters of the Third Kind, the Indiana Jones films, Jurassic Park, Schindler’s List, and Saving Private Ryan. Perhaps none of those acclaimed works is more accomplished than Jaws. “When I saw the audience reacting that first time I thought it was sort of a Grand Guignol kind of thriller film, though terrific in that regard,” McBride says. “The more I’ve seen it, it seems very positively restrained by comparison to today’s action films that have gotten so explosive and so violent. It’s a terrific character study of three men. A lot of the film is very intimate on those guys and their relationships.”

—Here are a selection of the many images that appear in LIFE’s special issue, Jaws: The Shark Movie That Changed the World. 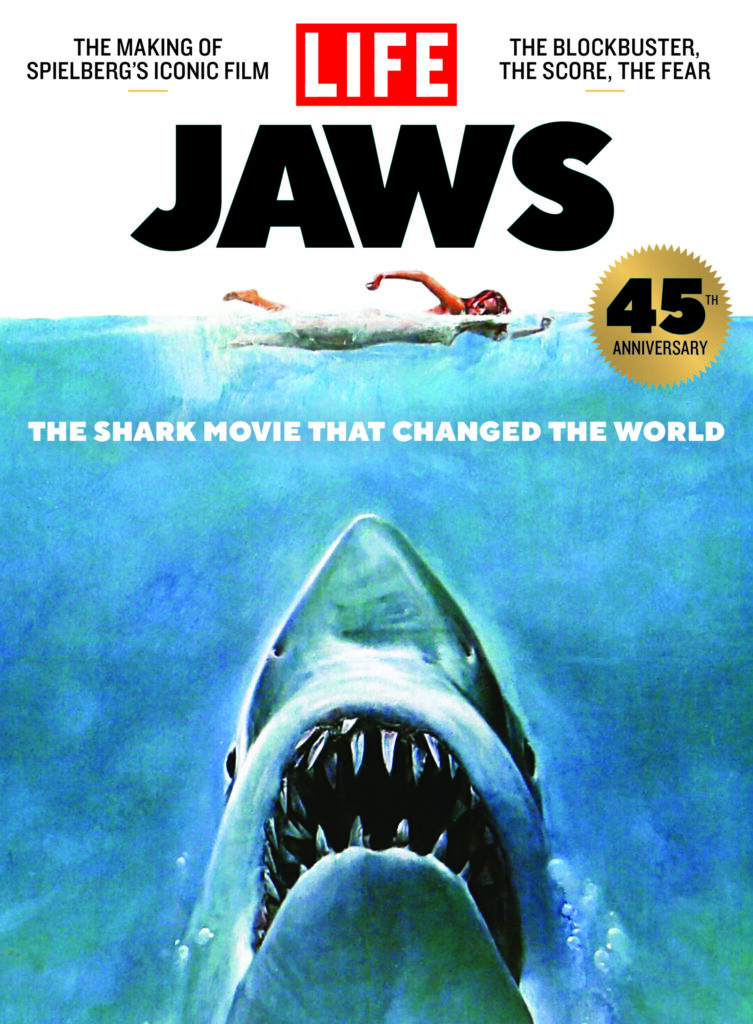 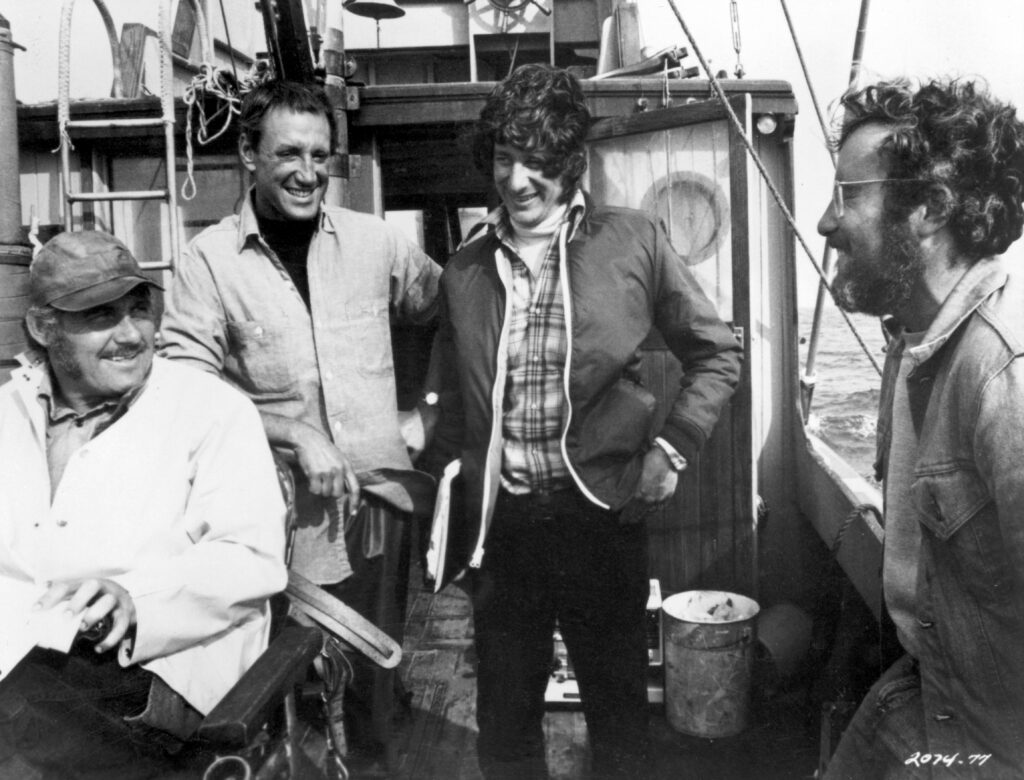 Steven Spielberg (second from the right) was only 27 when he took the helm to direct actors (l-r) Robert Shaw, Roy Scheider and Richard Dreyfuss in Jaws. 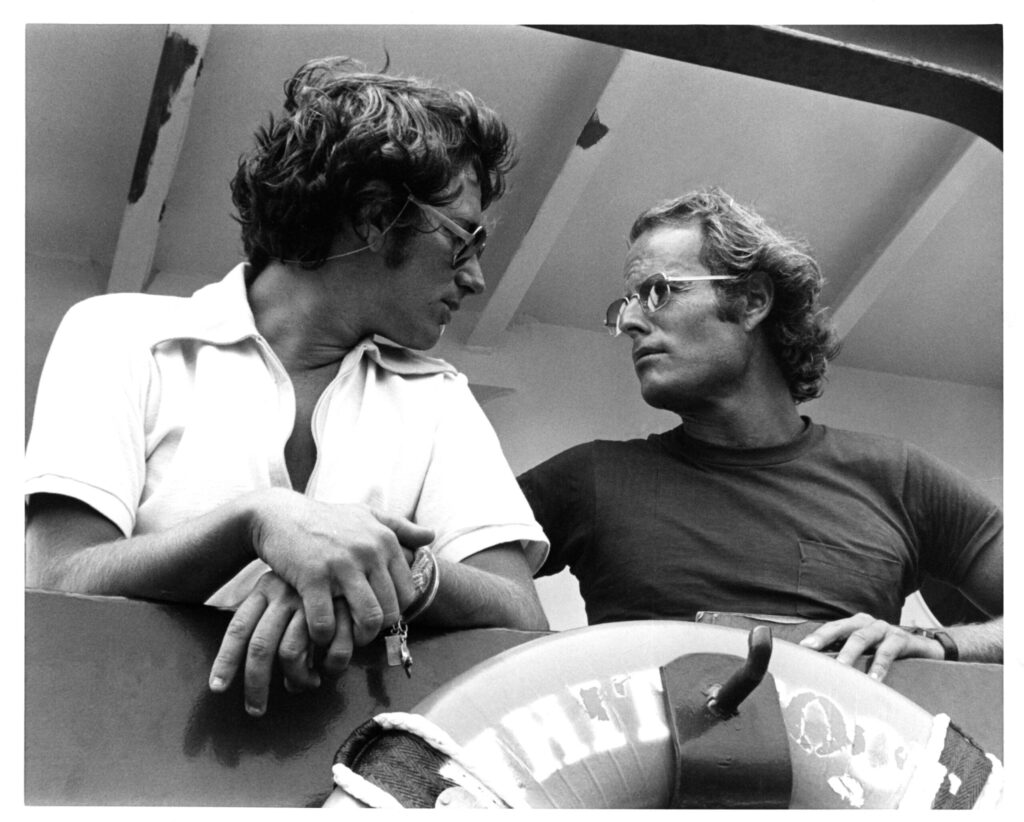 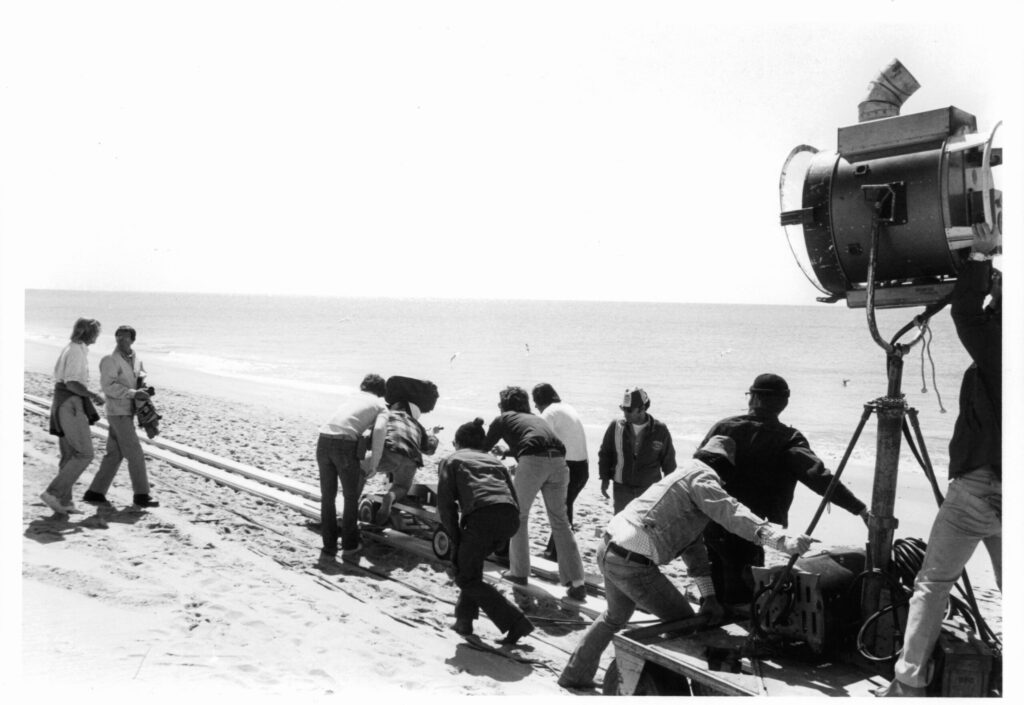 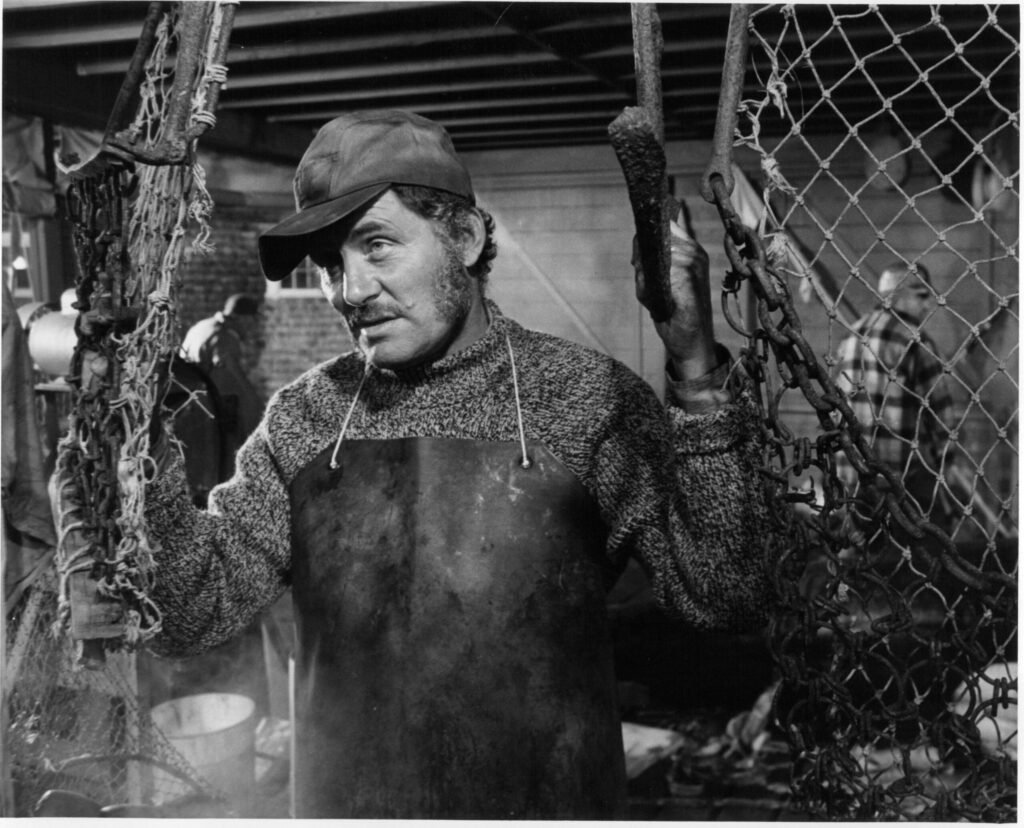 Robart Shaw brought a salty edge to his portrayal of Quint. 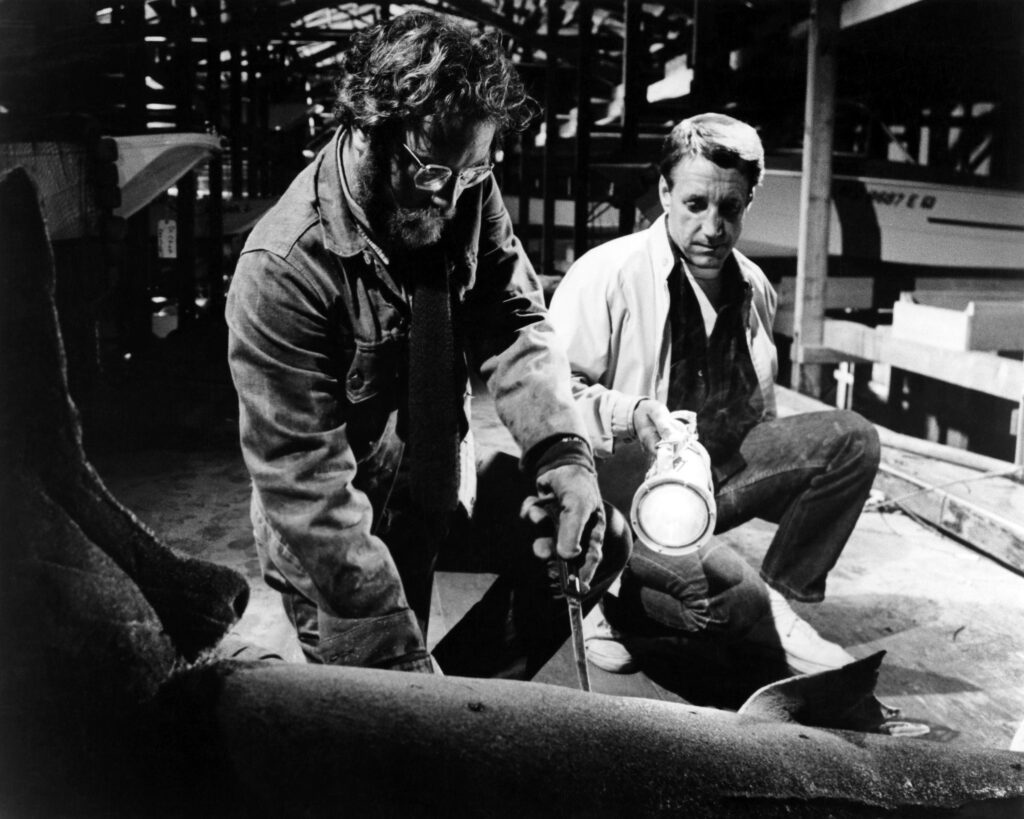 In one of the movie’s many iconic moments, police chief Martin Brody, (Roy Scheider) and Matt Hooper (Richard Dreyfuss) searched the insides of a shark; they find a Louisiana license plate but no proof that this shark had been hunting in Vineyard waters. 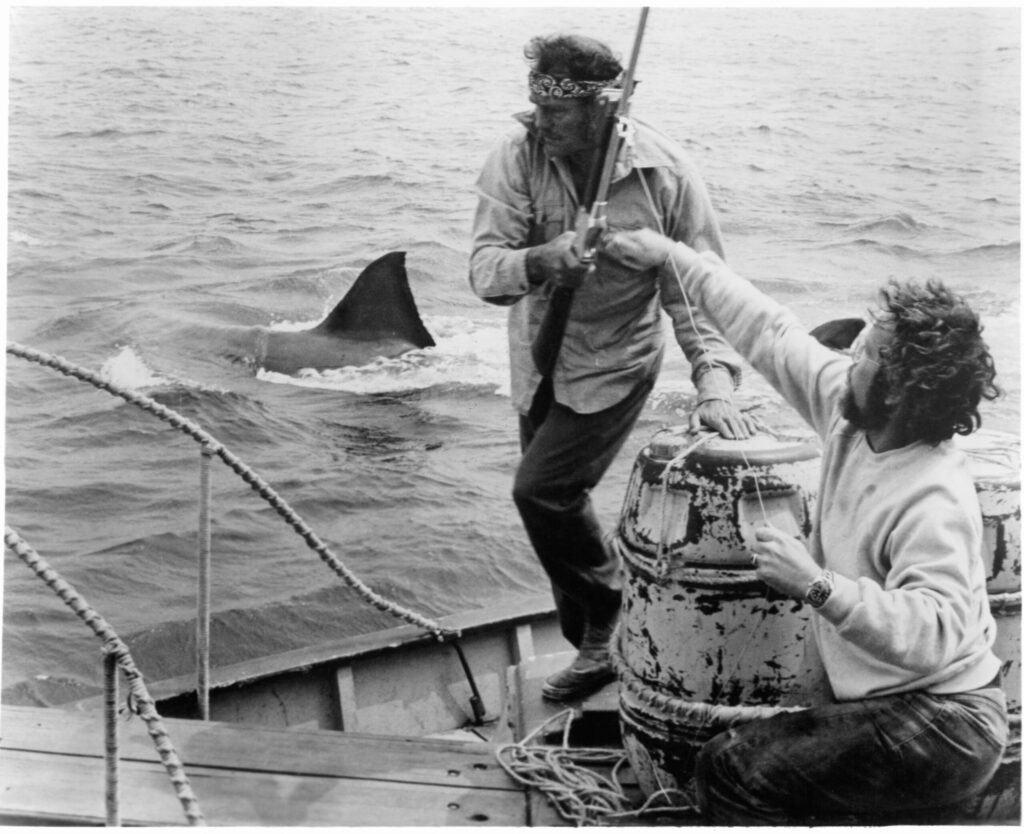 The hard-scrabble Quint and the scientifically oriented Hooper (played by Richard Dreyfuss) were the odd couple of the shark-hunting team. 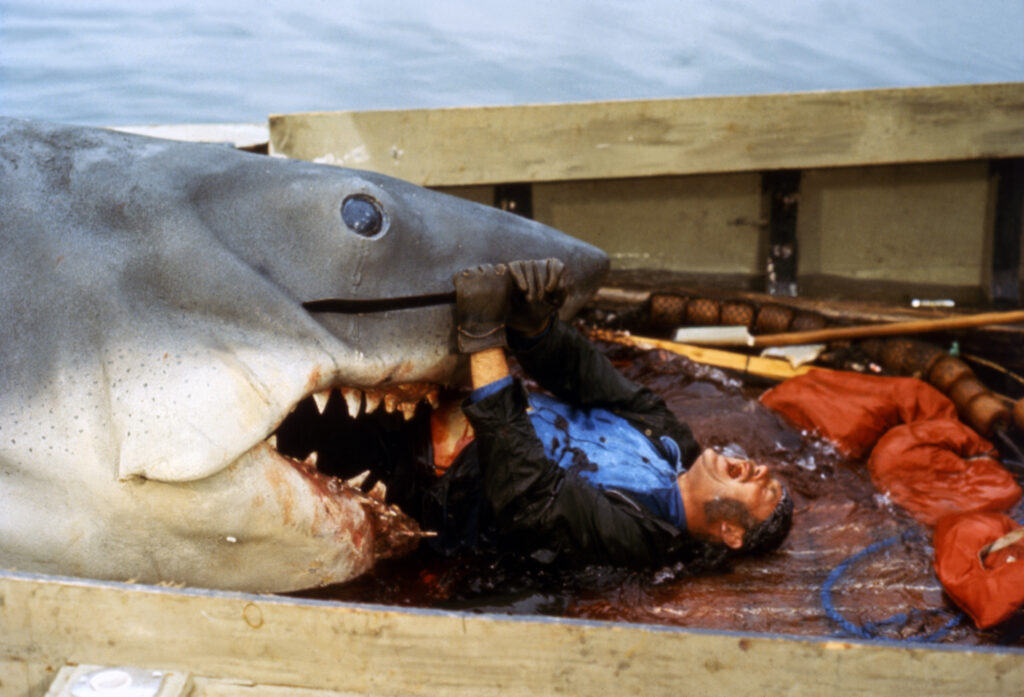 Spielberg’s shark, hidden for much of the movie, was never more visible to the audience than when it came partway aboard to attack Quint. 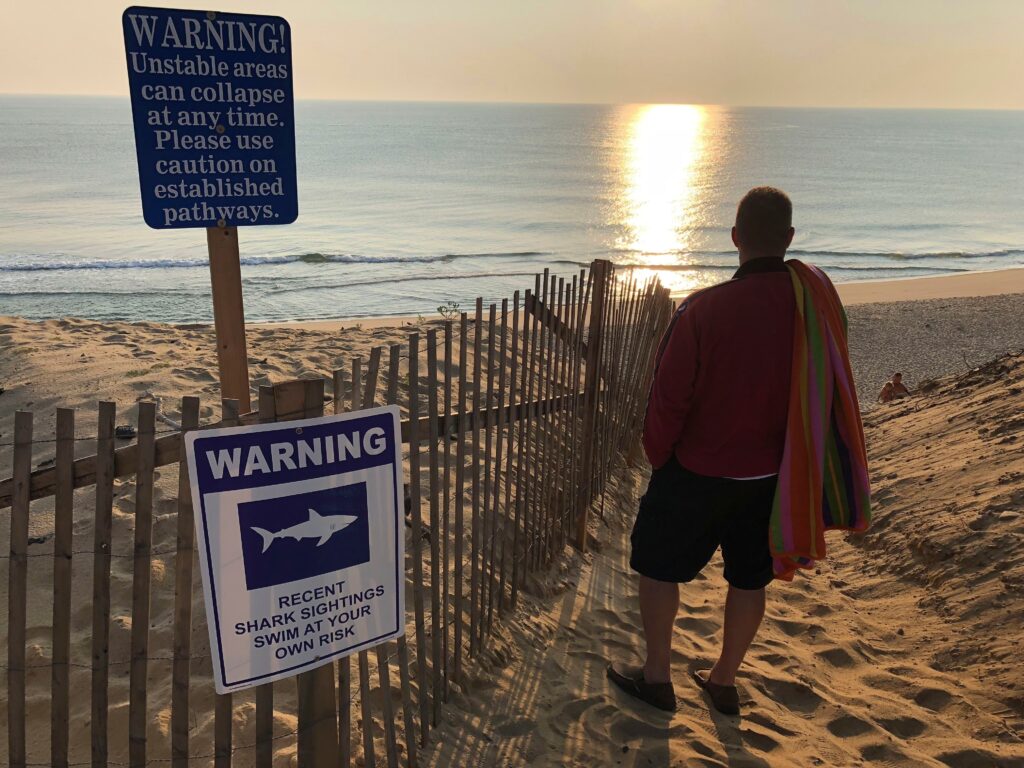 In 2018 beaches like this one in Truro, Mass., were closed to swimmers and surfers because of a shark attack off the shores of Cape Cod.