Jimmy Buffett joined the cast for a curtain call at the opening night of the musical “Escape To Margaritaville” on Broadway at The Marquis Theatre on March 15, 2018 in New York City.

The following is from LIFE’s new special issue Jimmy Buffett: Going Strong in Margaritaville, available at newsstands and online:

Margaritaville. It’s a brand, a business empire, a state of mind. It’s a radio station, a tequila, a state of bliss. But most important, it’s a song.

Too often, the merchandising surrounding Jimmy Buffett’s signature tune has obscured its magic. But strip away the brand. Ignore the frozen Margaritaville Crunchy Pimento Cheese & Shrimp Bites. Forget the T-shirts emblazoned with WOMAN TO BLAME. What’s left is a finely crafted, cheeky but nuanced nugget of genius.

The melody of “Margaritaville” floats in on a breeze of Caribbean instrumentation. The vocal is so relaxed it’s practically flat on its back in a hammock. The lyrics evoke both a beach bum’s apathy and a broken heart drowning under a slosh of booze. The song is short, simple, silly, sad, and sublime—and still strong enough to support the enormous mythology surrounding Jimmy Buffett. It’s a heavy task to lay on a four-minute tune that peaked at No. 8 on the Billboard Hot 100 singles chart in 1977.

As large as it looms, “Margaritaville” is only a piece of Buffett’s unprecedented success story. He has been releasing records for half a century and counting. Many of those LPs bombed—his 1970 debut, Down to Earth, reportedly sold 324 copies when it was first pressed, though some claim it moved 374. Many other albums gave you songs you know by heart.

Rarely have critics been kind to Buffett. But what some call corny, others consider poetry. Bob Dylan named Buffett as one of the songwriters he most admired, specifically mentioning fan favorite “He Went to Paris.” Before “Margaritaville,” Buffett’s unique skills drew only scraps of deserving press—as scarce then as now. A brief 1976 New York Times review read, “Mr. Buffett is a clever man, both in his words and his music. The lyrics generally hint at deeper meaning without getting portentous about it.” Contemplative? Yes. Portentous? Never.

Between records, Buffett tours. He has played Greenwich Village folk clubs and Texas roadhouses, headlined at Fenway Park and Wrigley Field, opened for the Eagles on their Hotel California tour, and shared the stage with Willie Nelson at Nelson’s annual Fourth of July festival. But his travel doesn’t always involve riding in a bus stuffed with bandmates. Sometimes piloting one of his planes or captaining one of his boats, he has crossed the Atlantic, traversed the equator, gone to Paris, sailed through rain and snow, and cut records in the shade of a volcano.

Some of the legends that surround Buffett are false (he insists, for example, that he never smuggled drugs into Key West); many more are true. He did crash his twin-engine amphibious plane off the coast of New England. He did dodge bullets shot at his plane by the Jamaican police. He did have to follow a scorching set by Lionel Richie’s Commodores—he decided the best way to follow the “Brick House” band was with a liquid-courage-powered 12-minute monologue and a single song (“Why Don’t We Get Drunk,” punctuated by the eponymous lyrics, plus “and screw”).

From the stage to the deck of so many sloops, Buffett has beaten the odds again and again, thanks to hard work, dogged perseverance, immense talent, and lots of luck. And he’s done it with a smile on his face, and a guitar—or a margarita—in his hand. 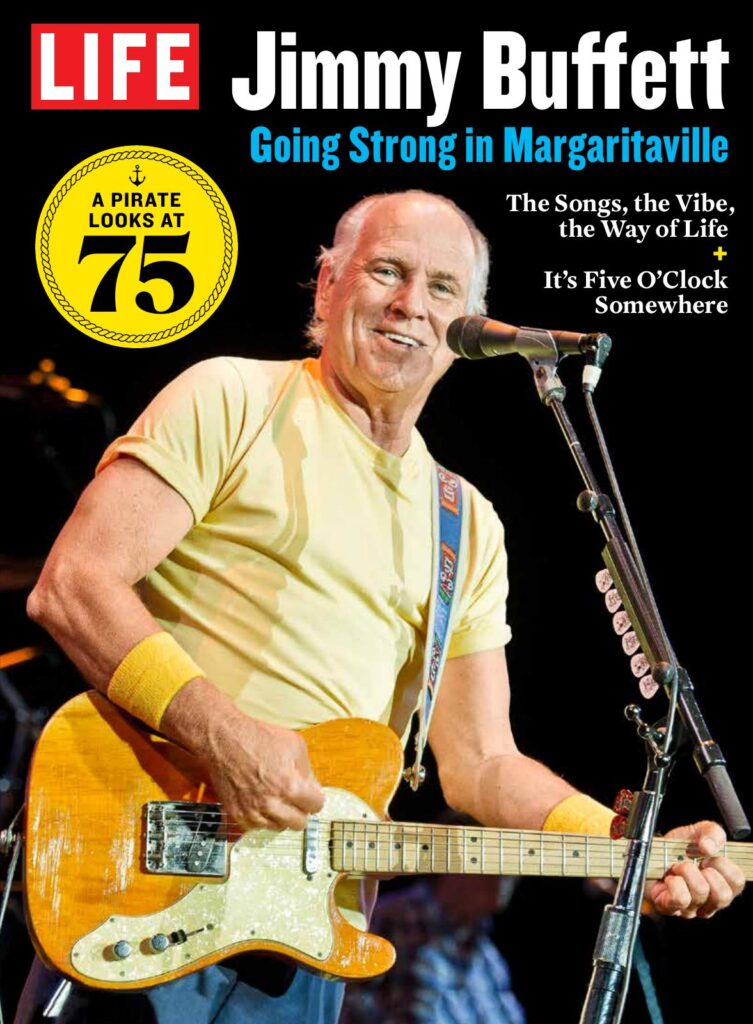 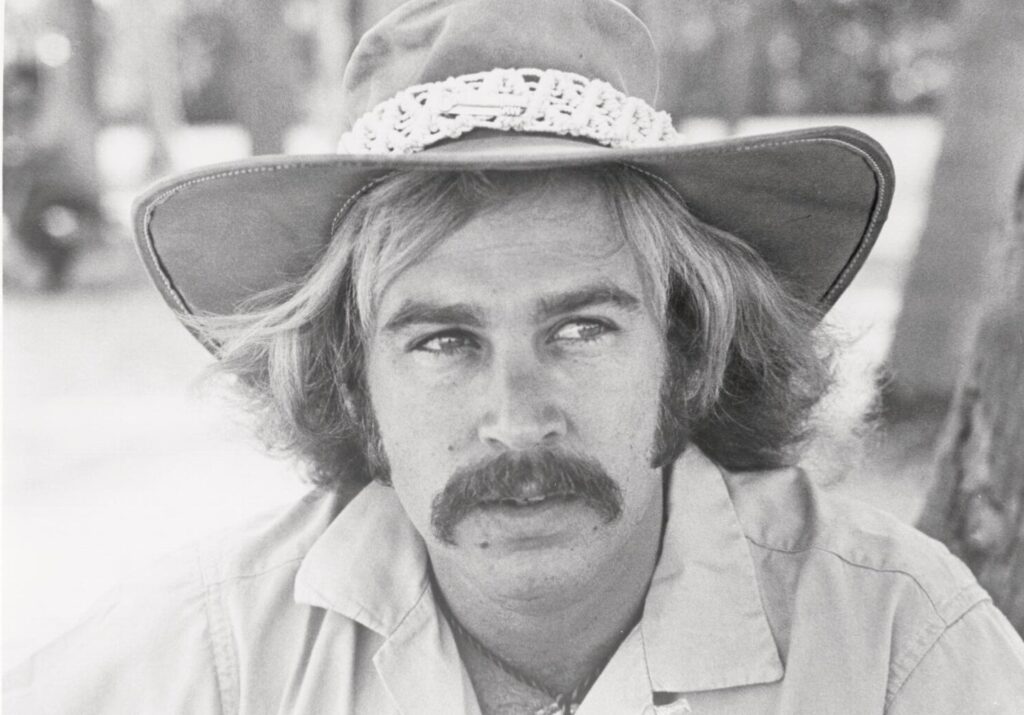 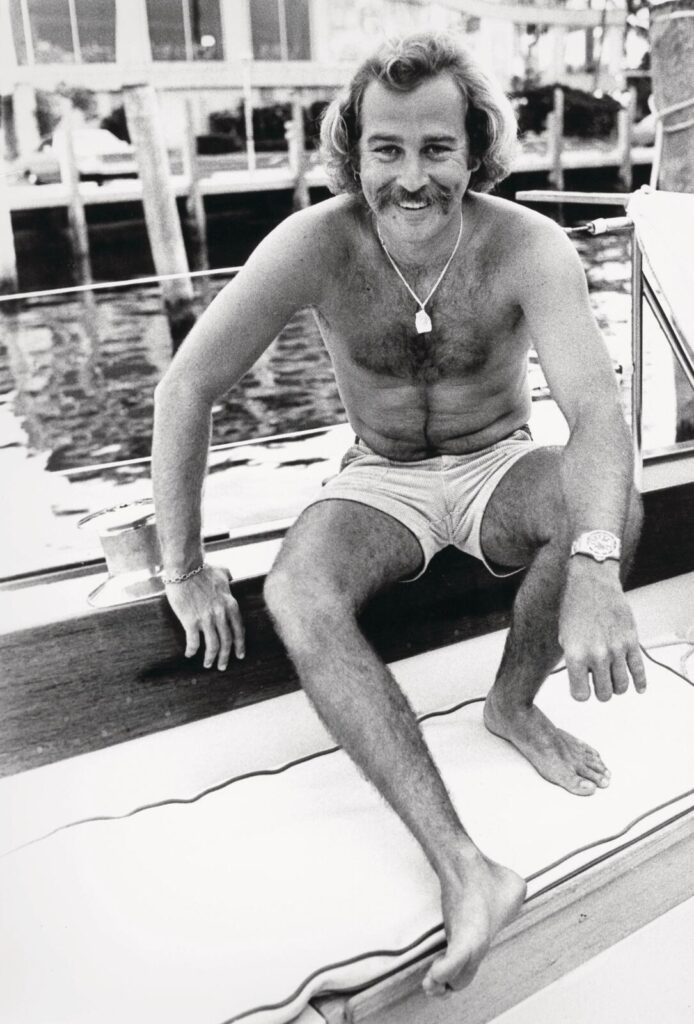 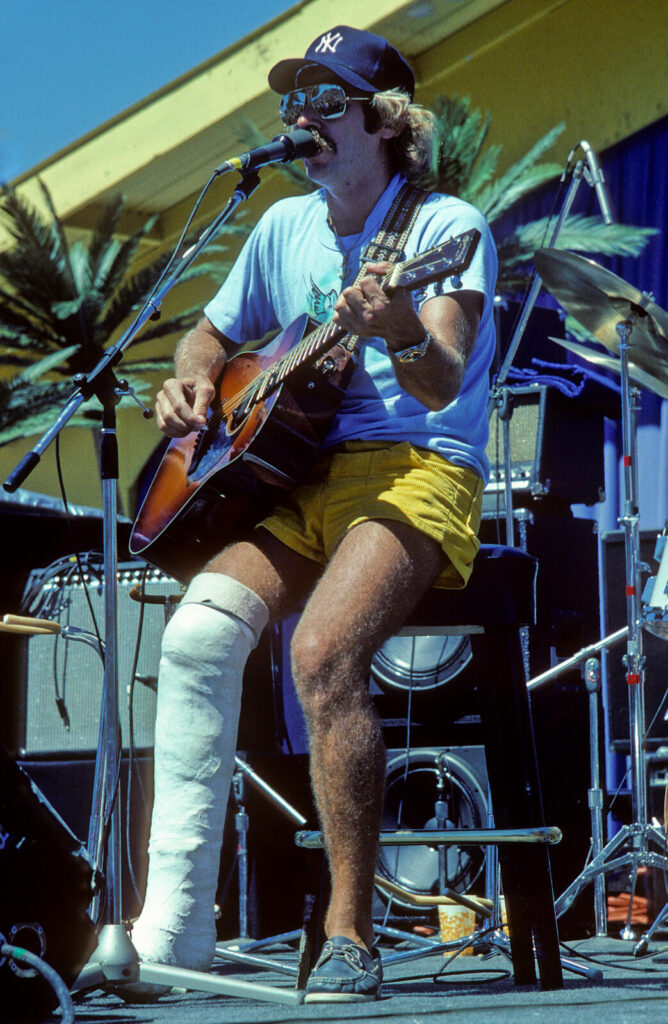 Jimmy Buffett performed at the Calavaras County Fair on June 10, 1978 in Angels Camp, California; the broken leg was from a pickup game of softball. 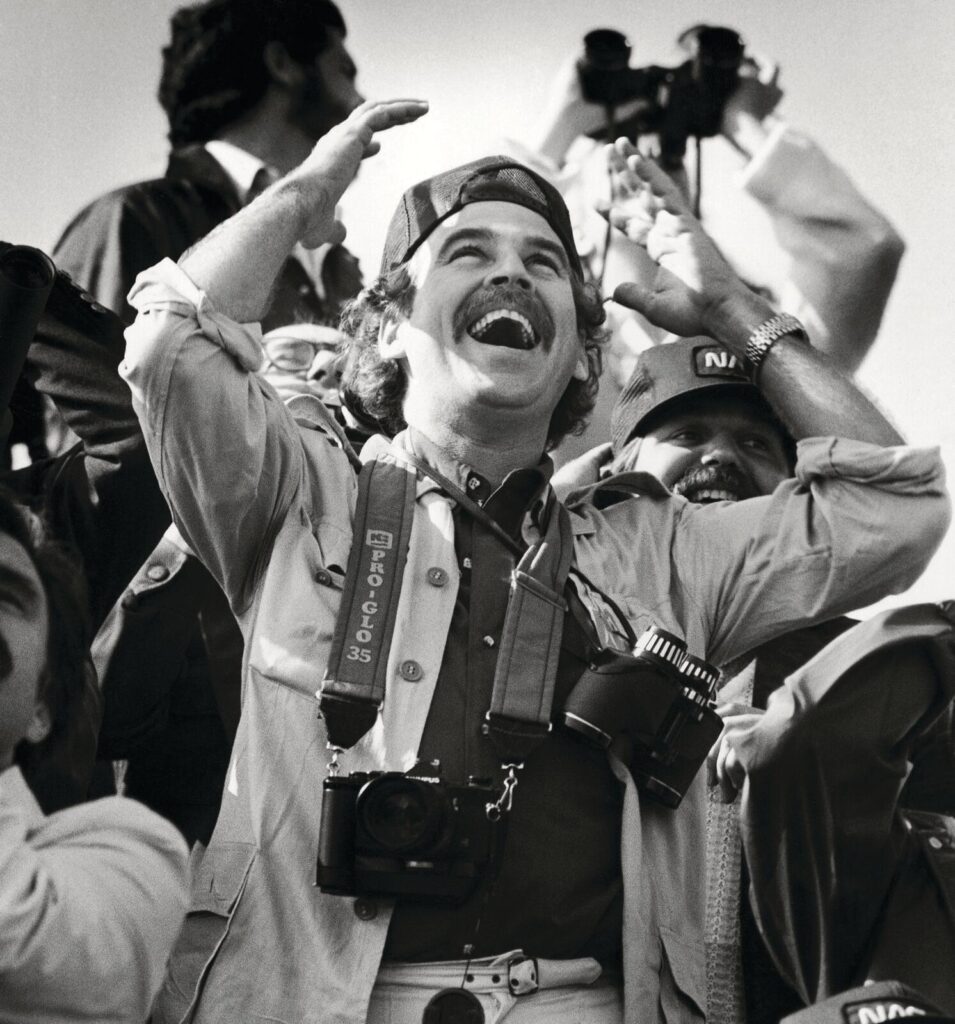 Jimmy Biuffett watched the launch of the Space Shuttle from a VIP area at the Kennedy Space Center in Florida, 1981. 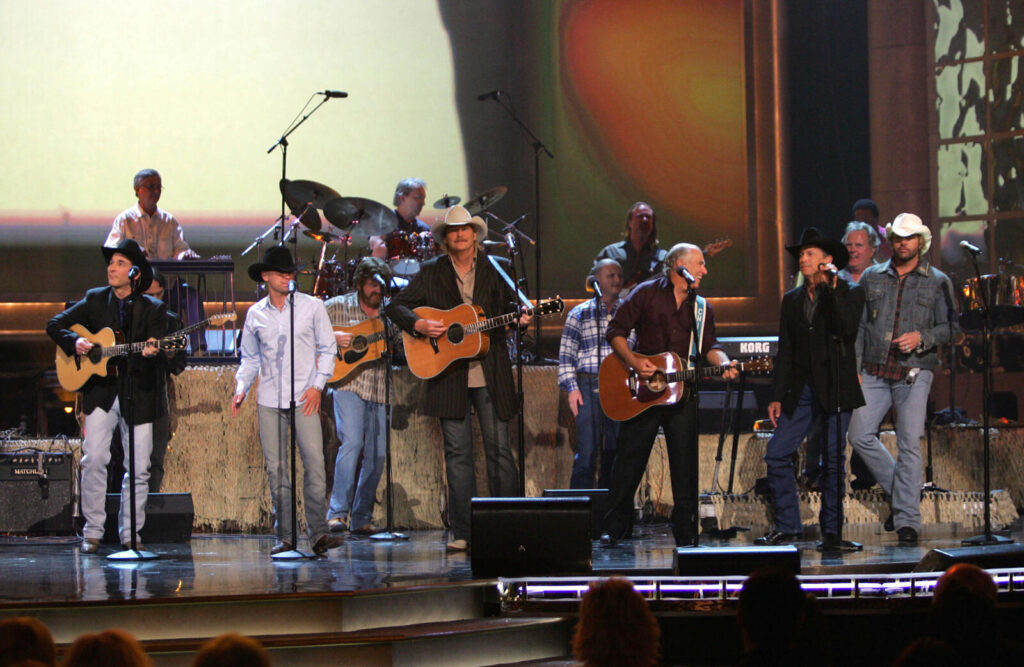 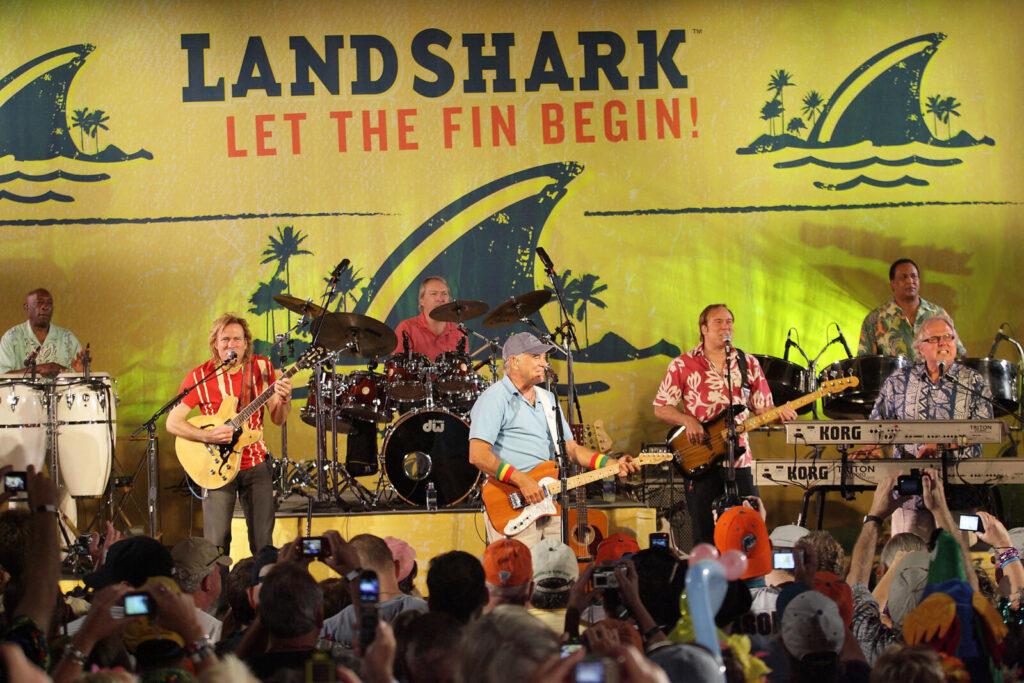 Jimmy Buffet performed during a press conference for the renaming of Dolphin Stadium to LandShark Stadium on May 8, 2009 in Miami Gardens, Florida. 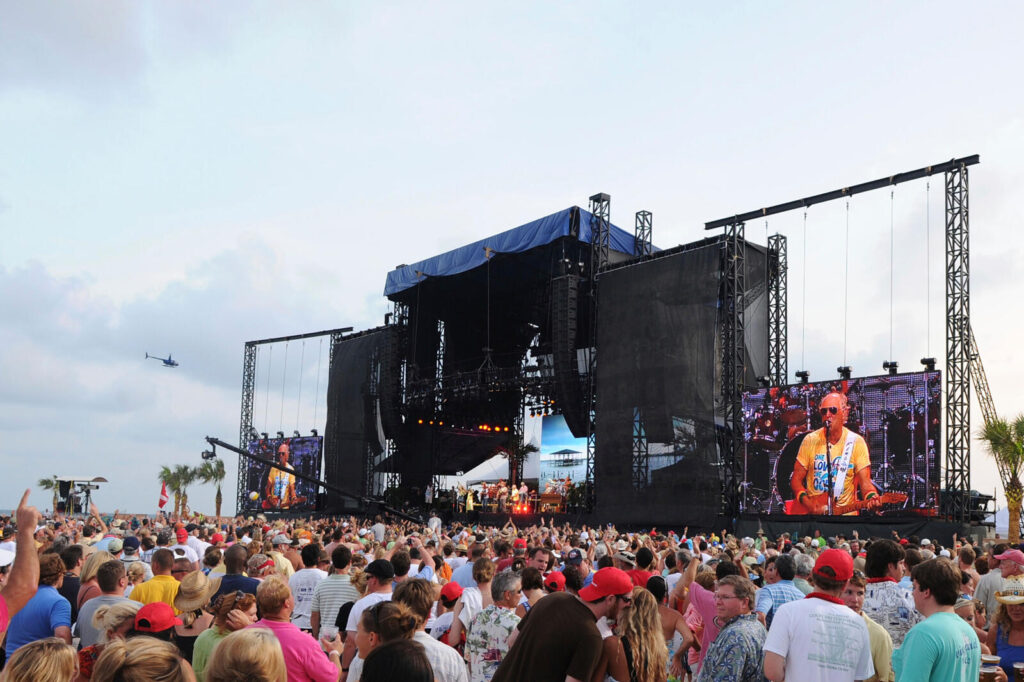 Jimmy Buffett performed at Jimmy Buffett & Friends: Live from the Gulf Coast, a concert presented by CMT, on July 11, 2010 in Gulf Shores, Alabama. 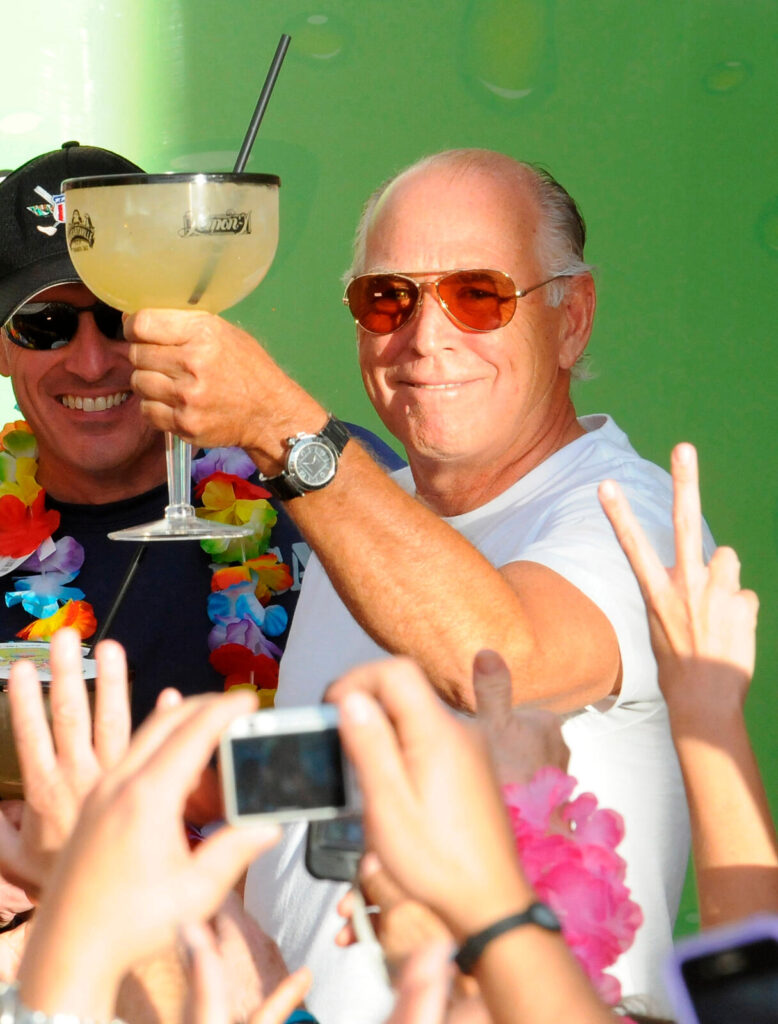 Jimmy Buffett raised the margarita that set the Guinness World Record for the largest ever in celebration of the Margaritaville Casino grand opening in Las Vegas, Oct. 14, 2011. 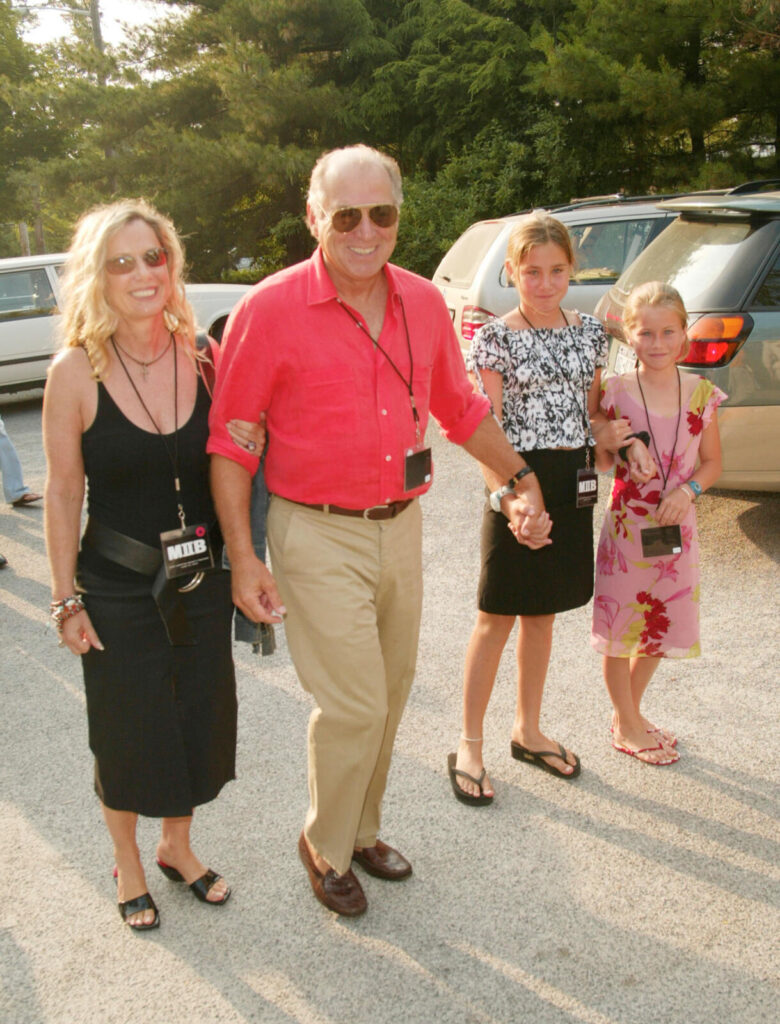 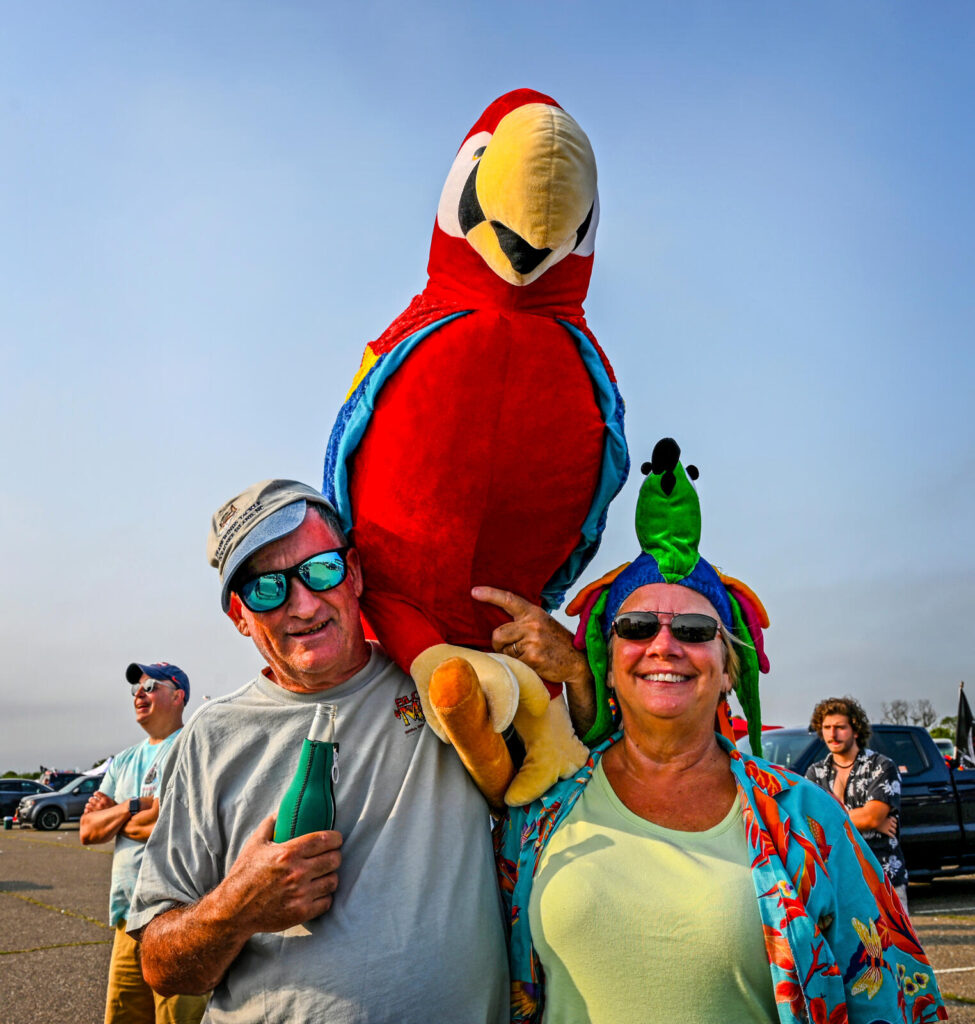 Parrotheads Joe and Vicki Manning of Maryland traveled up to tailgate and attend the Jimmy Buffett concert at Jones Beach in New York,on August 10, 2021.