Pete Maravich (LSU) fired off a fade-away jumper against Alabama in 1969.

In the eight-team 1958 Dixie Classic, the Michigan State Spartans (in the dark uniforms) made it all the way to the final before falling to host North Carolina State (in white)..

These days college basketball careers go by in a flash—no sooner does a player make an impression on fans than he has left school to play professionally. It used to be different. Athletes stayed in college for four years. Fans could see stars mature and develop before they moved on to the NBA.

Here, LIFE.com presents a gallery of photographs from a golden era of college hoops, featuring all-time greats (Lew Alcindor, a.k.a, Kareem Abdul-Jabbar; Oscar Robertson; Pete Maravich; Wilt Chamberlain; Bob Cousy; Jerry Lucas) as well as other players who made brief splashes in their time and then like so many athletes, quietly faded from the public’s view.

A prime example: Yale’s Tony Lavelli, a terrific 6′ 3″ forward in the late 1940s who scored close to 2,000 points and graduated as the fourth highest-scorer in college history. (Today, he is  no longer in the all-time top 250.) Lavelli was selected as the Boston Celtics’ first pick in the 1949 draft. But as music was his true passion and he had hoped to study at Julliard in New York, Lavelli agreed to sign with Boston on one unusual condition: that the Celtics pay him an extra $125 per game to play his beloved accordion at half-time at the old Boston Garden.

Lavelli played two years of pro ball, but ultimately returned to his first love, going on to a long career as a performer and songwriter. 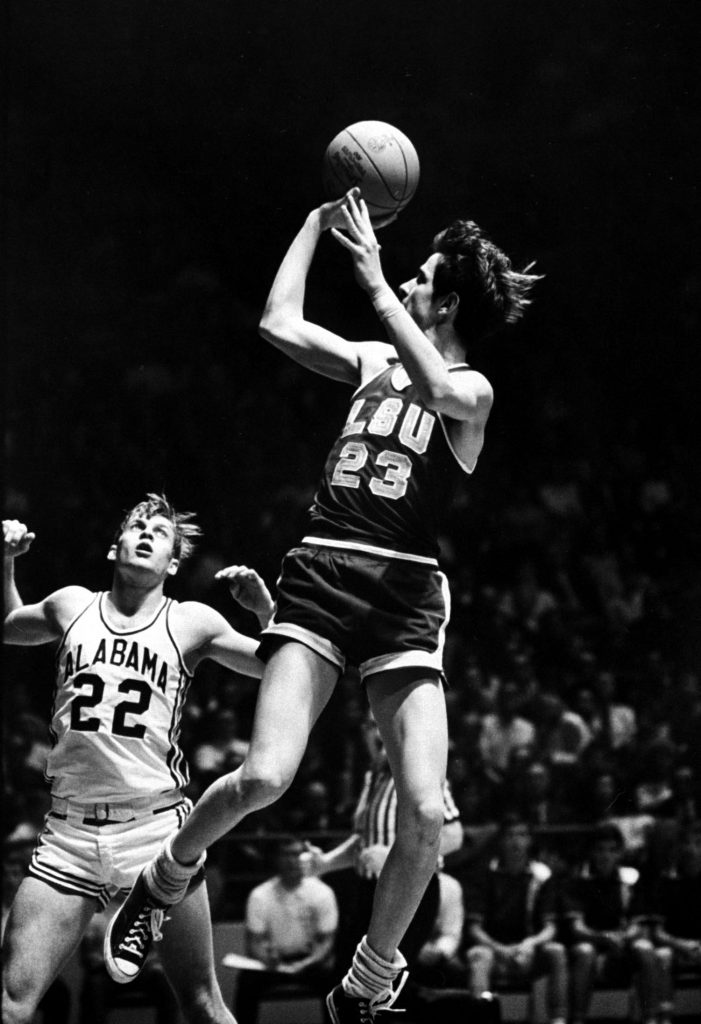 Pete Maravich (LSU) fired off a fade-away jumper against Alabama in 1969. 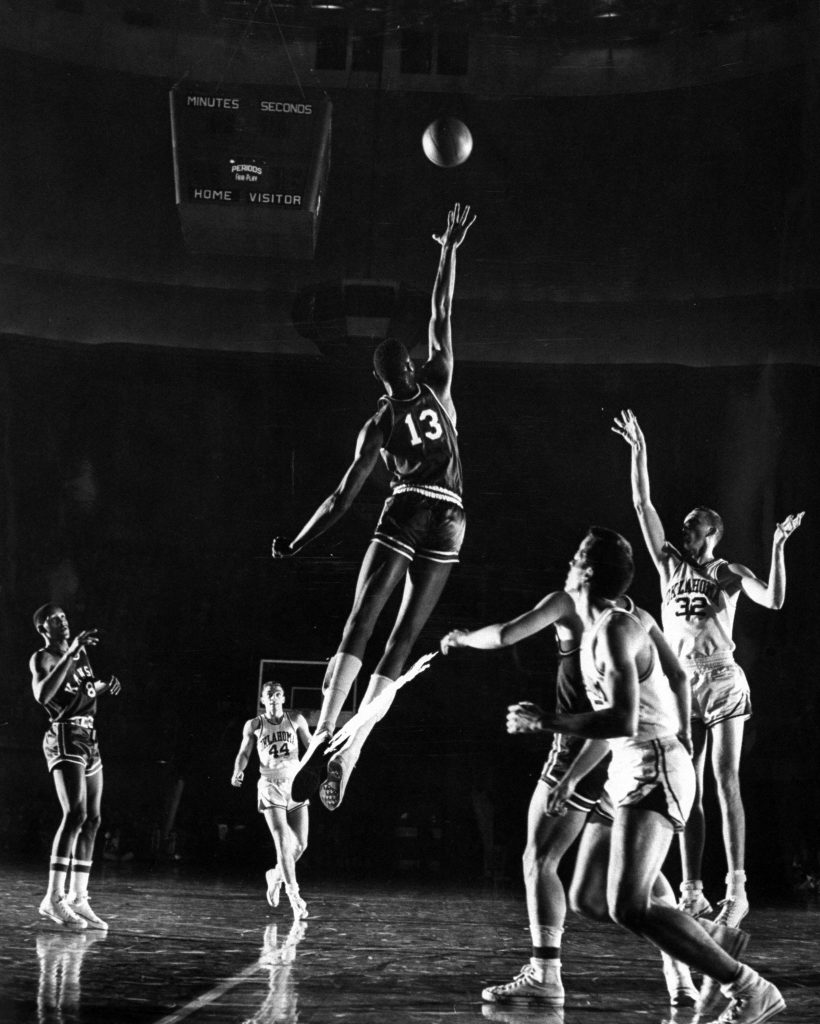 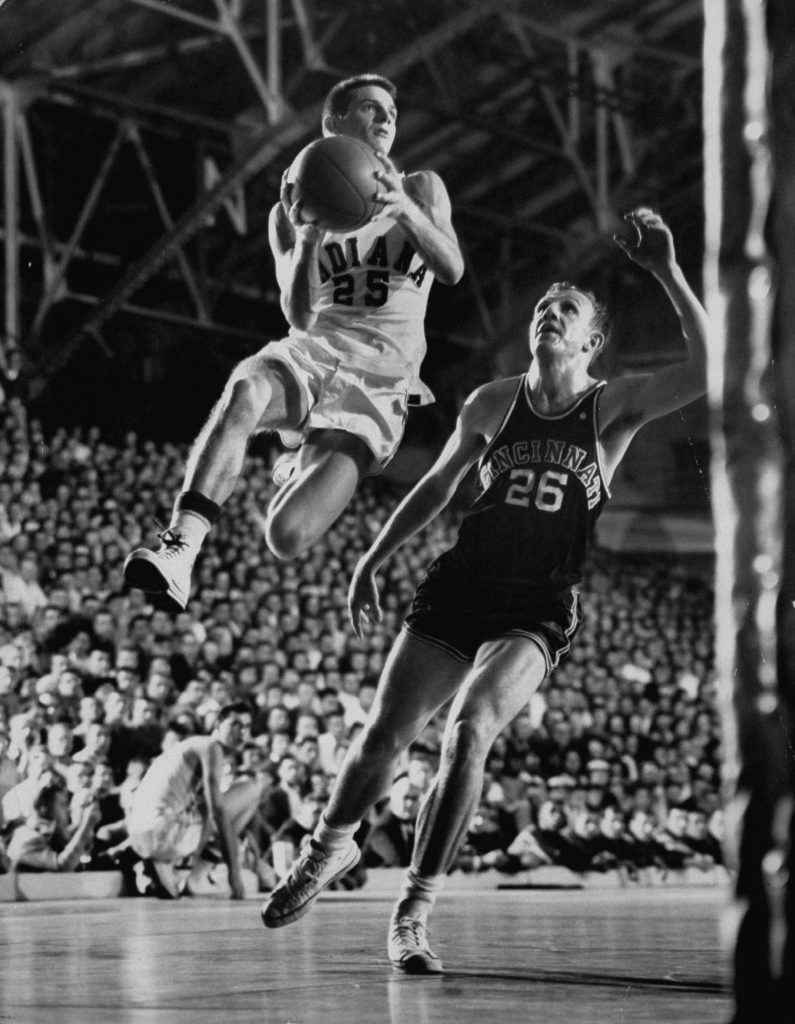 Burke Scott (above, with ball) was a starter on Indiana’s 1953 NCAA championship team. 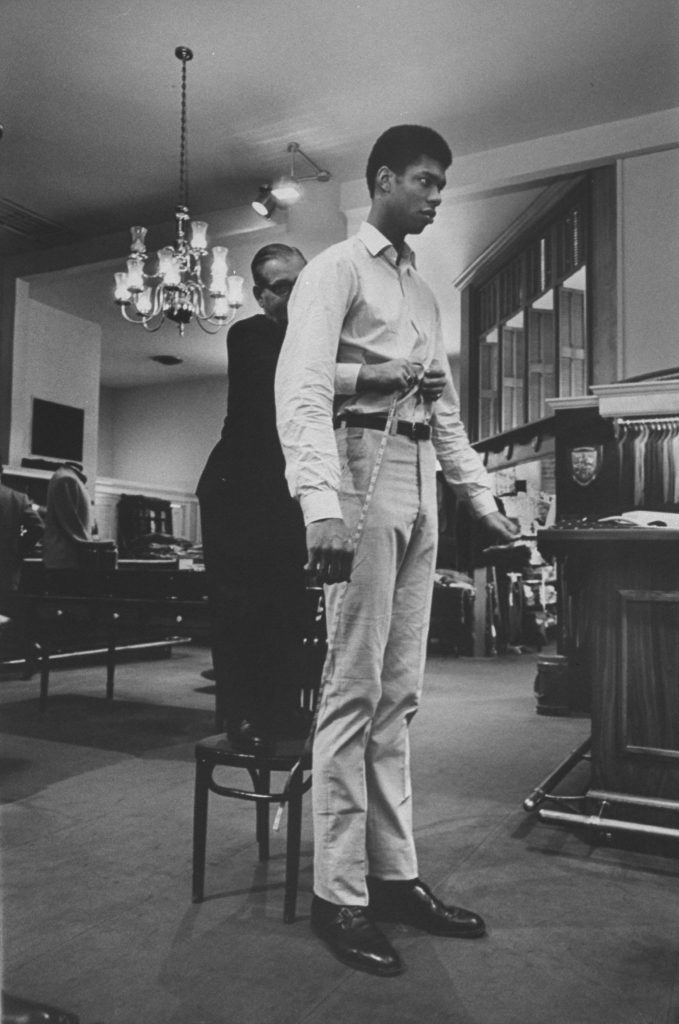 Seven-foot, two-inch Lew Alcindor (later Kareem Abdul-Jabbar, here being fitted for trousers with a 51-inch inseam in 1967) left his native New York for UCLA, where he helped the Bruins win a record 88 games in a row and three national titles. 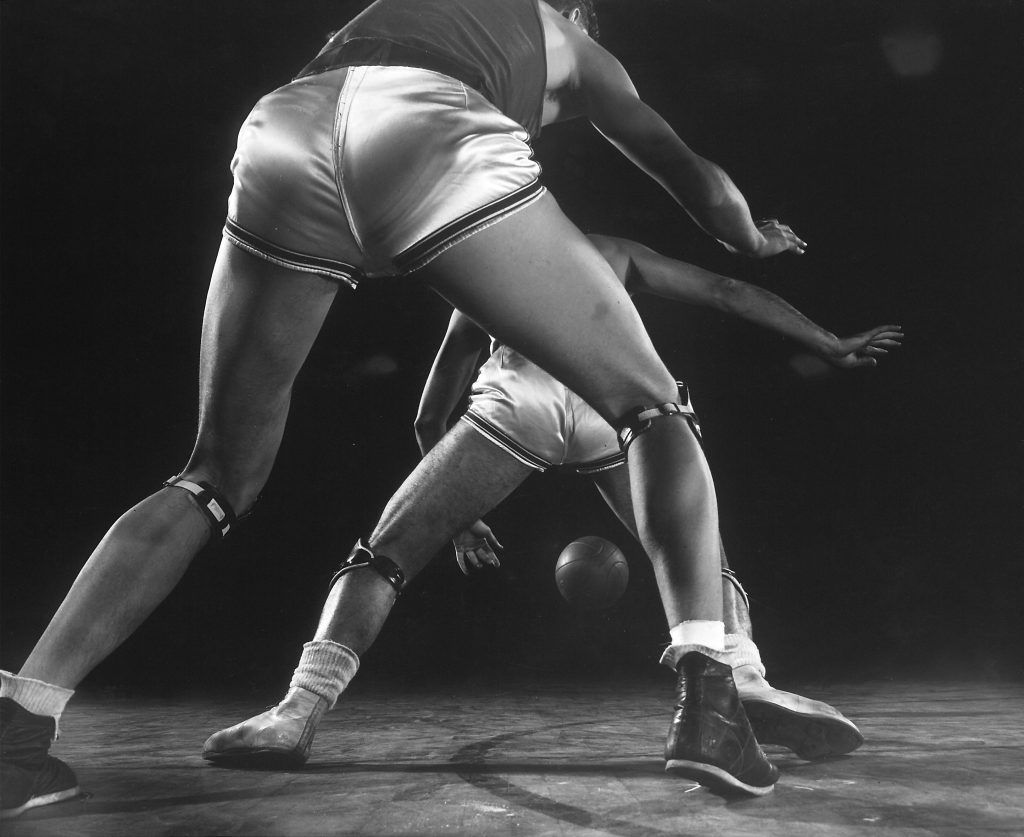 The Long Island University Blackbirds practiced in 1940. Under Hall of Fame coach Clair Bee, the Blackbirds were a powerhouse in the 1930s and ’40s, winning two NIT titles. 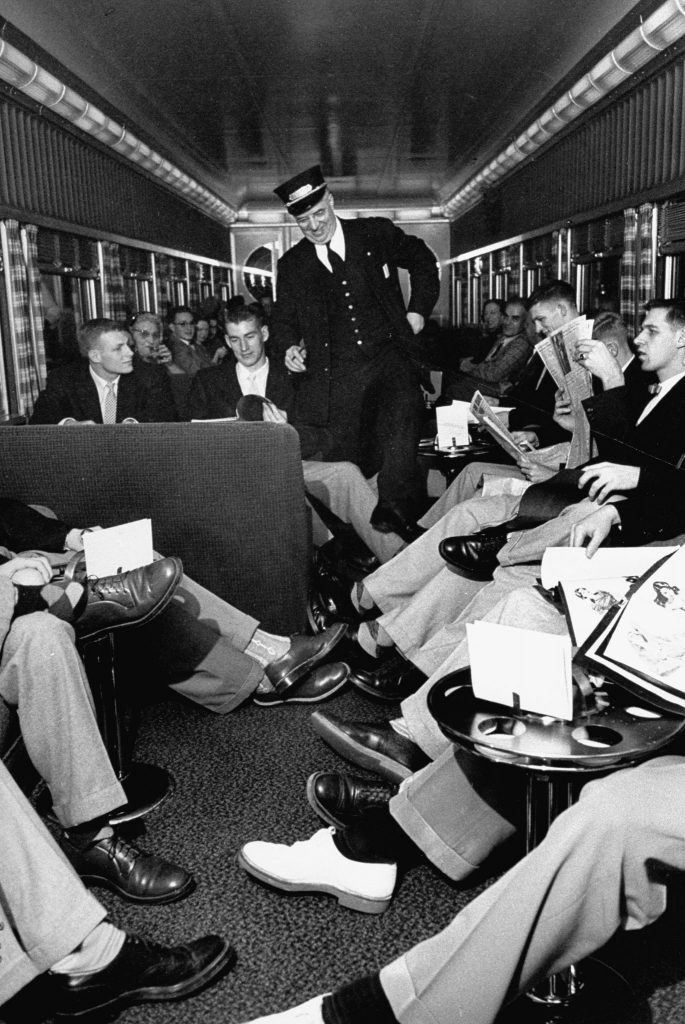 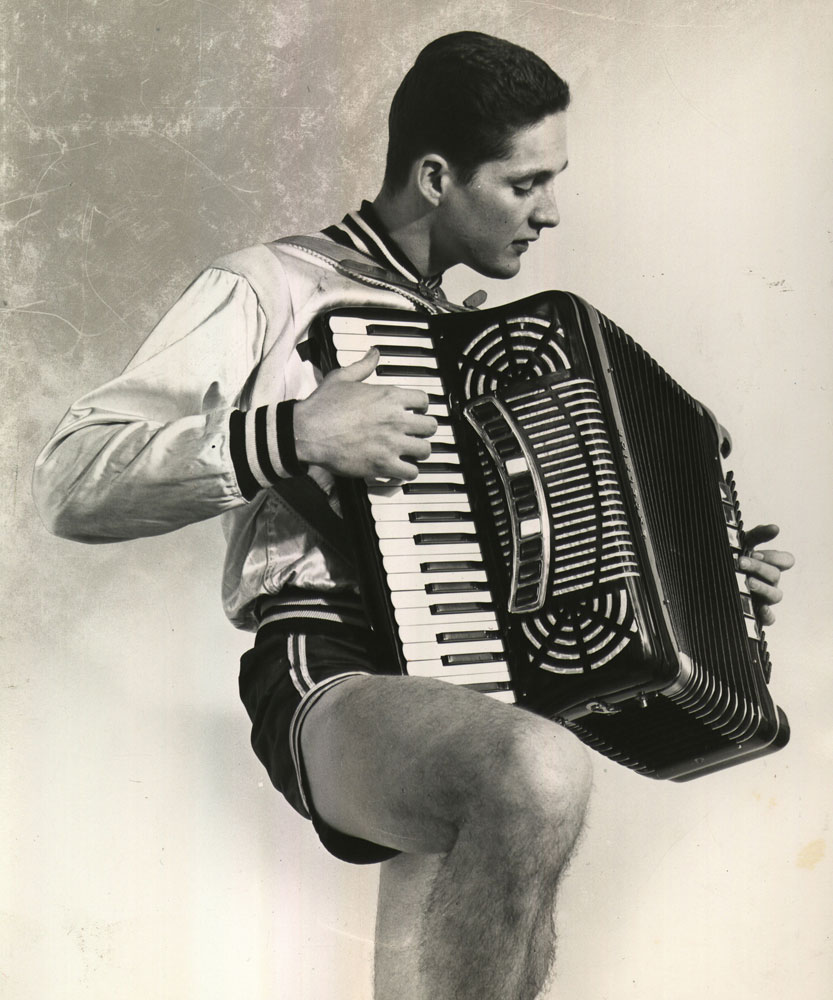 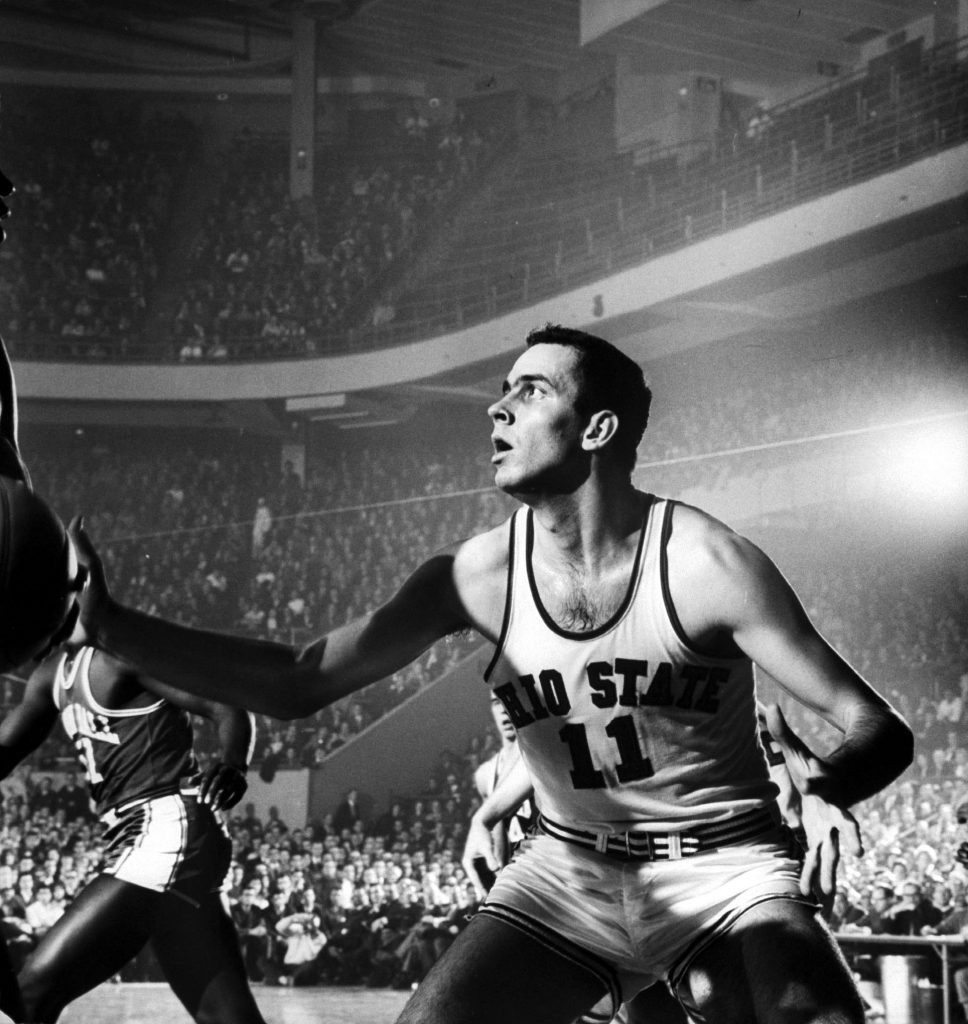 The 6′ 8″ Jerry Lucas (above, in 1960) is still regarded as one of the best big men in the history of the game. In three college seasons with Ohio State he averaged 24.3 points and 17.2 rebounds and led the Buckeyes to three NCAA title games. They won it all in 1960. 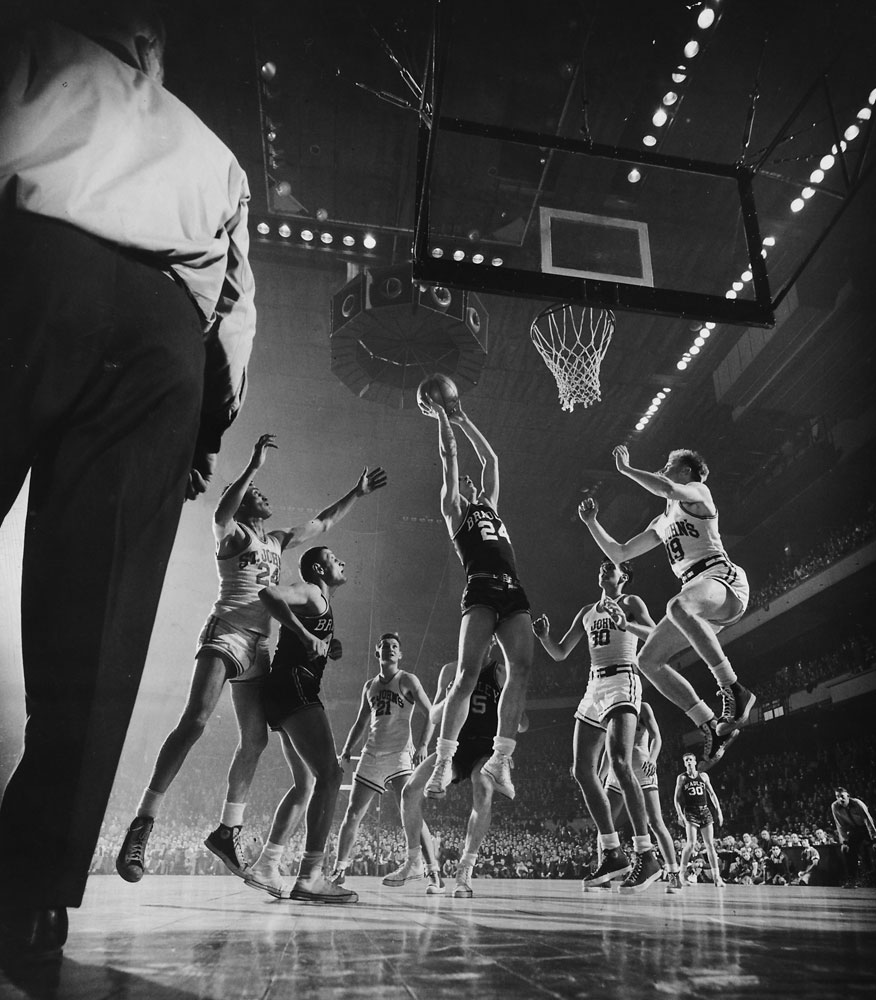 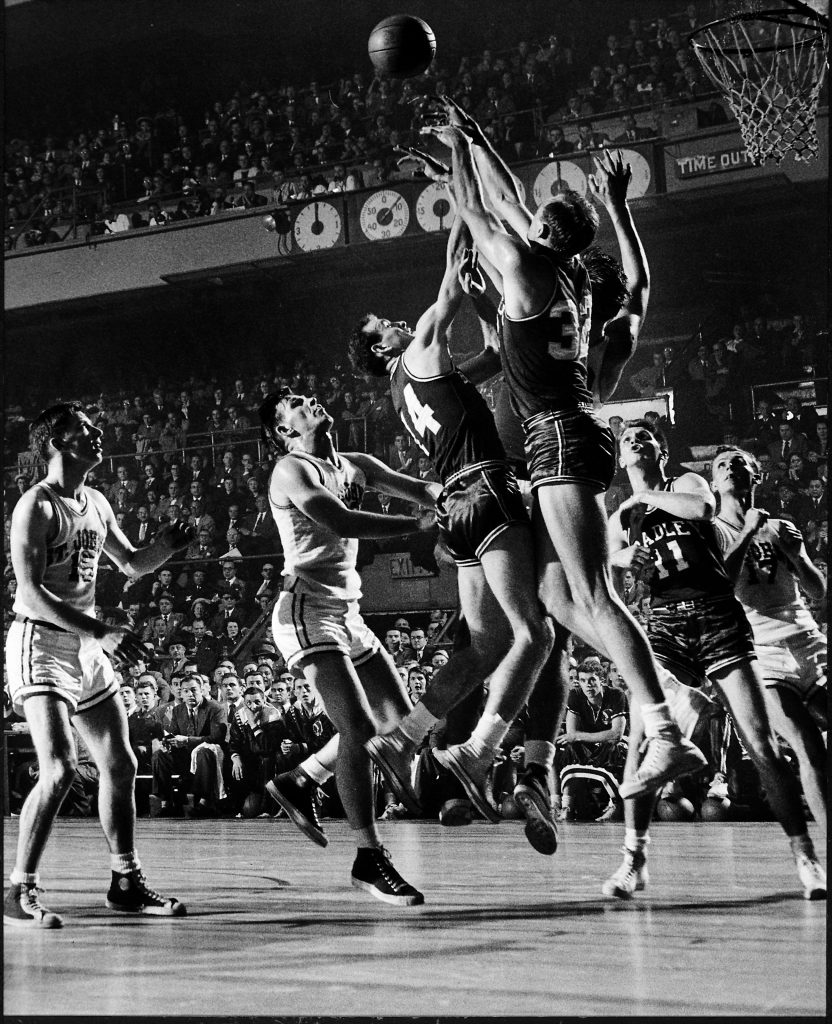 New York’s Madison Square Garden (the old Garden, built in 1925 and razed in ’68) was the mecca of college basketball, hosting every round of the NIT for 40 years and home to the Final Four for much of the 1940s. Above: Bradley vs. St. John’s (in white, the ninth-winningest program in NCAA history), 1951. 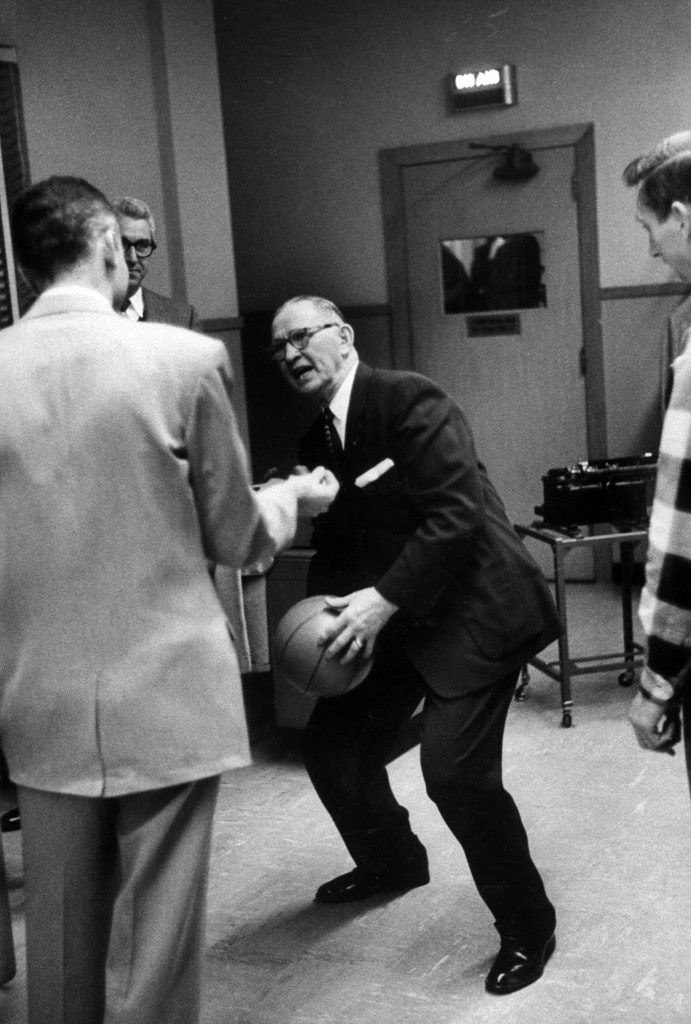 The great Kansas coach Forrest Allen, nicknamed “Phog,” is often referred to as the “Father of Basketball Coaching.” Allen (here demonstrating some sort of funky move in 1957) coached Dean Smith; he recruited Wilt Chamberlain to Kansas; the Jayhawks’ Allen Fieldhouse is named for him, and a banner hanging in the fieldhouse reads, “Pay heed all who enter, beware of the Phog.” 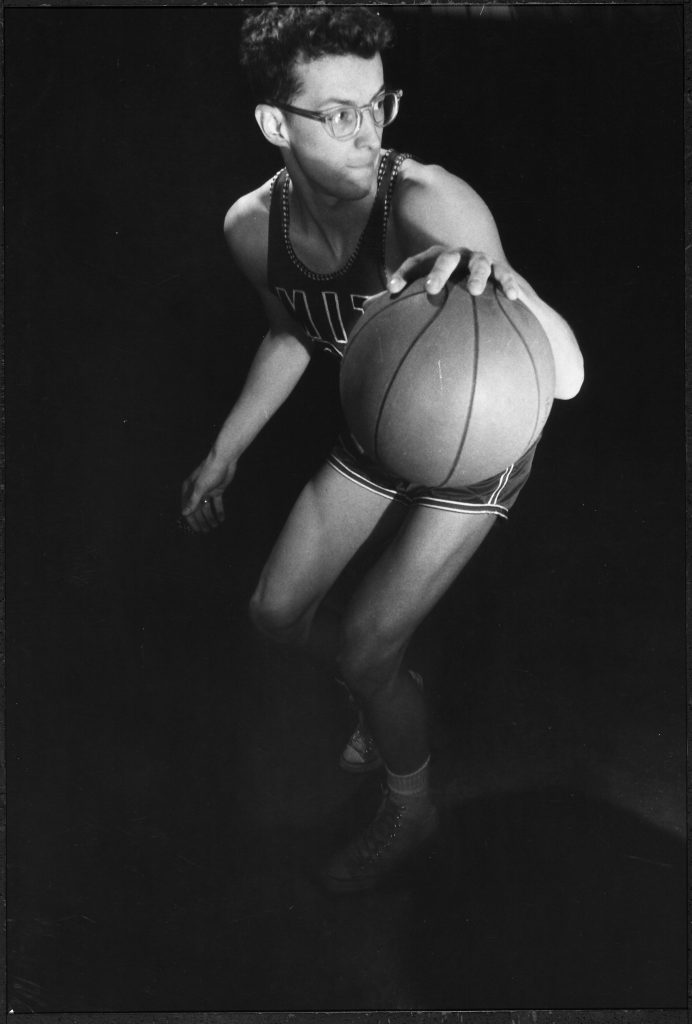 MIT’s Dimitry Vergun (above, in 1956, the year he graduated) became an expert on designing buildings to withstand earthquakes. 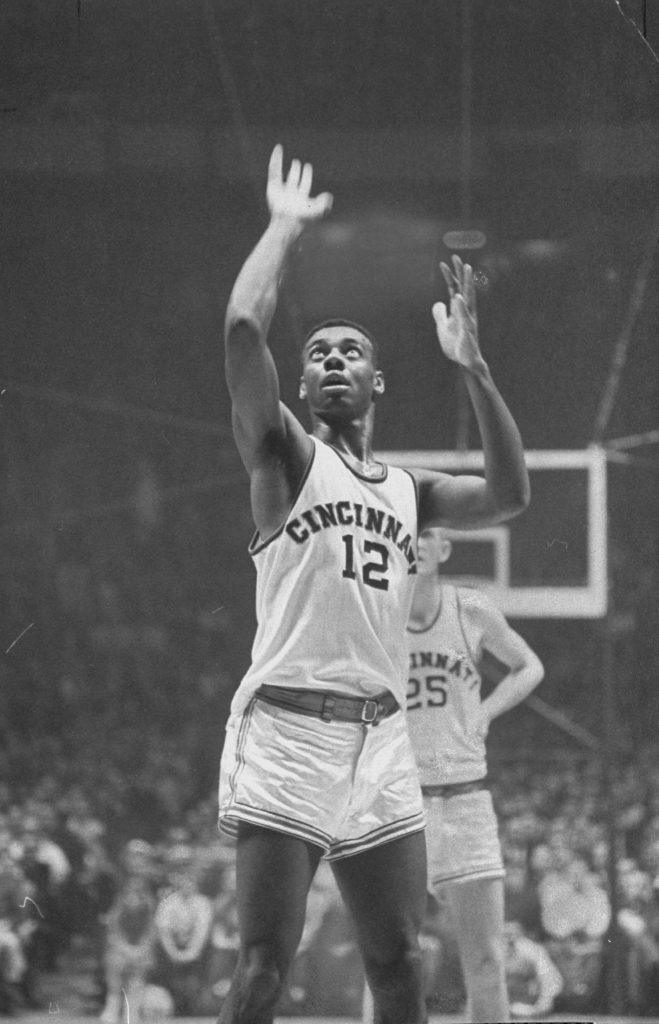 One of the first big guards in basketball, 6′ 5″, 220-pound Oscar Robertson (shown in 1959) led the nation in scoring in each of his three seasons at Cincinnati and left school as the top scorer in college history. The Big O was inducted into the NBA Hall of Fame in 1980. 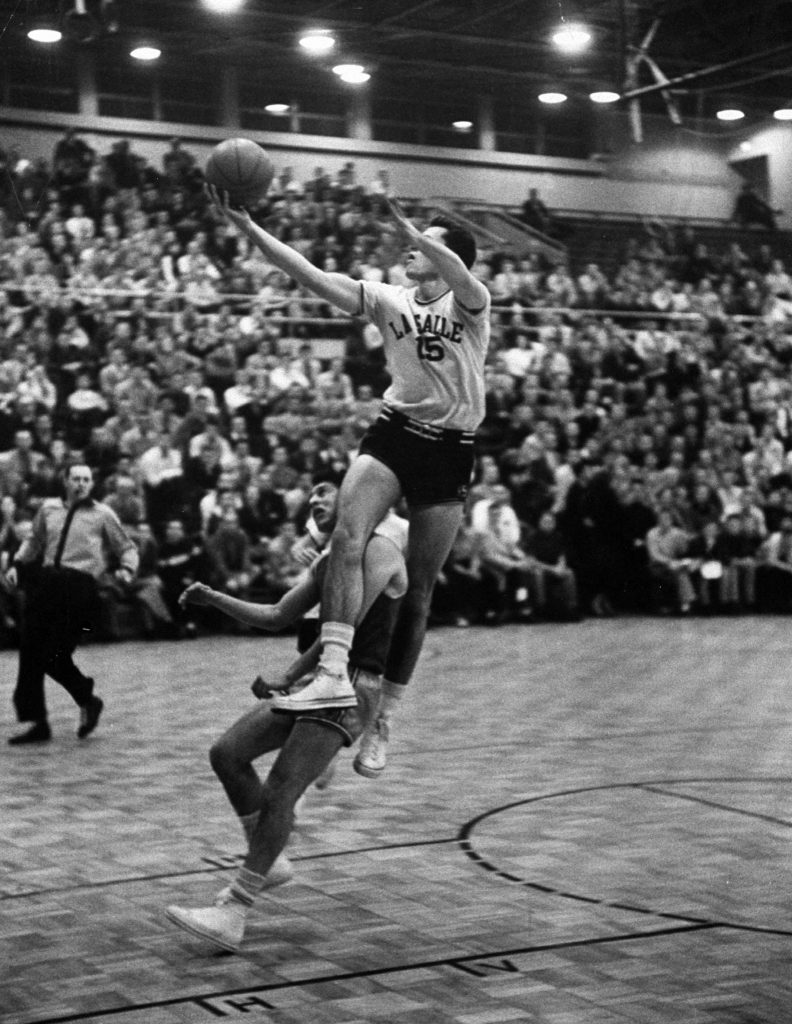 La Salle’s Tom Gola (driving to the hoop in 1954) was one of the college game’s earliest superstars, a do-it-all forward. The four-time All-American also scored 2,462 points, for career averages of 20.9 points and 18.7 rebounds. 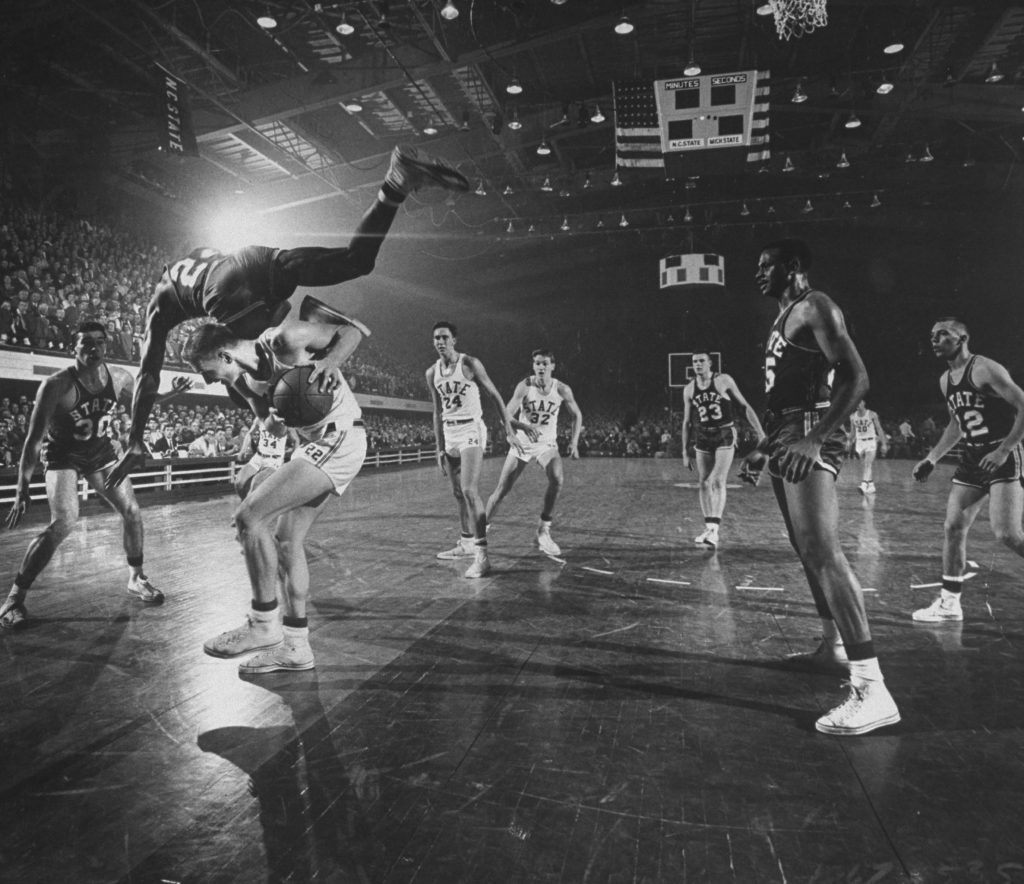 In the eight-team 1958 Dixie Classic, the Michigan State Spartans (in the dark uniforms) made it all the way to the final before falling to host North Carolina State (in white).. 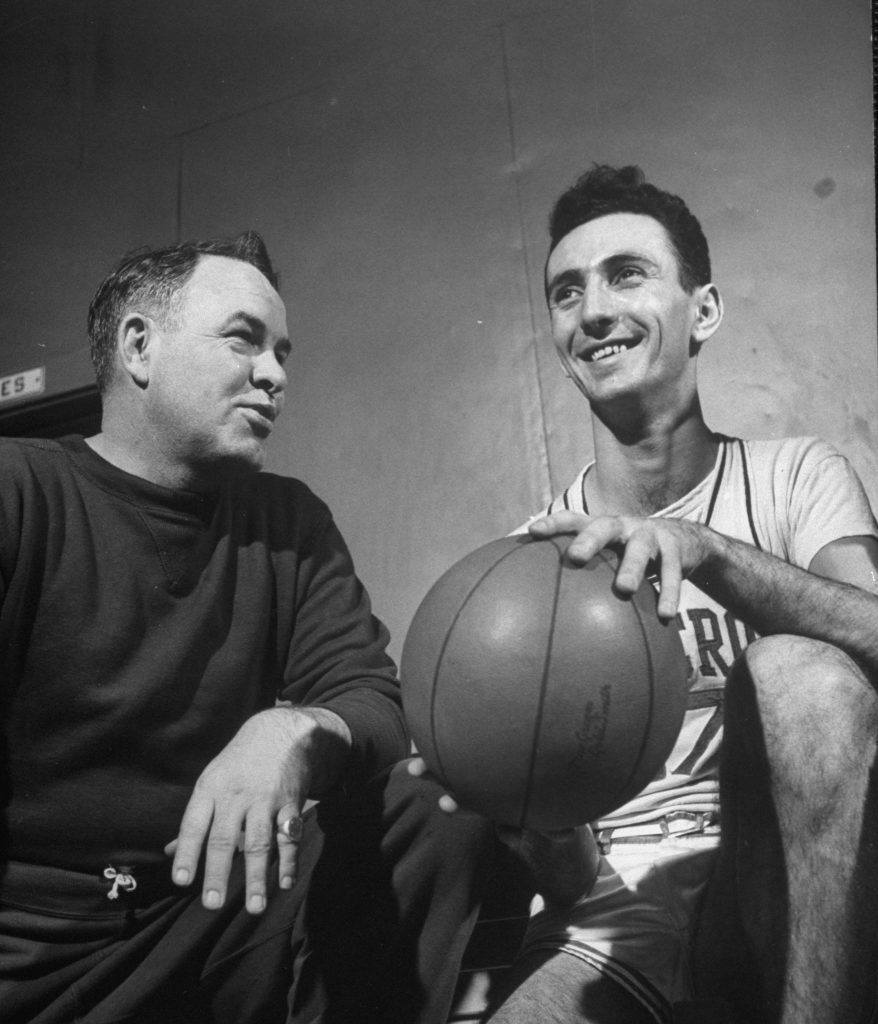 Bob Cousy (above, at right, in 1950 when he was with Holy Cross) brought a showman’s flair to the sport before it was an accepted part of the game, regularly dribbling behind his back and throwing no-look passes. 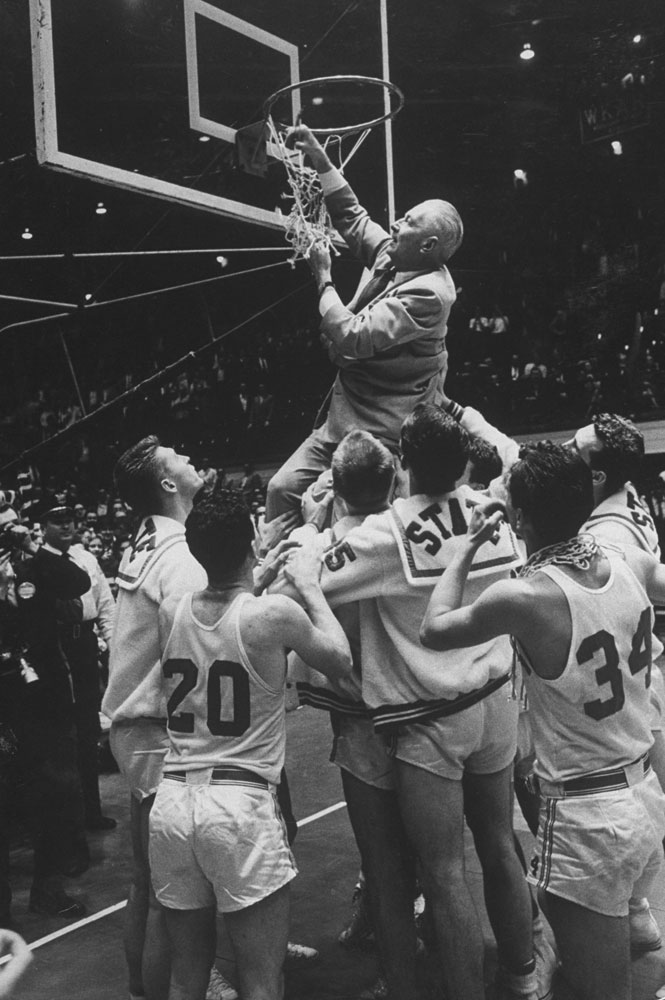 The great North Carolina State Wolfpack coach Everett “The Gray Fox” Case cut down the net after winning the Dixie Classic title in 1959.