Little Women: A Story for Every Generation

Florence Pugh, as Amy, burned Jo’s manuscript in a fit of rage in the 2019 film version of Little Women.

Ask a fan of Louisa May Alcott’s Little Women to identify a favorite moment in the book, and you might get any number of responses. There’s the time Jo accidentally singes the hair off her older sister, Meg, as she’s helping Meg prepare for a social engagement. Or the time young, artistic Amy accidentally plasters herself into a bucket as she’s attempting to make a cast of her foot. There are the amateur dramatic productions the sisters stage inside their humble home—swashbuckling tales of high adventure. And there are the comically combative encounters with their wealthy, outspoken Aunt March, who has no compunction about expressing her disapproval over their somewhat unconventional lifestyle.

Then there are the heartbreaking tragedies and daily hardships that befall the girls: death, for one thing, as well as the daunting challenges of marriage and motherhood, fraught relationships, and unrequited romantic love.

All of that and much more is brought to life in the beautiful special edition of LIFE, Little Women: A Story for Every Generation, which is available here. The issue revisits the roots of the Little Women story, explores the many wonderful incarnations of the story on film (and stage) and shows why the story remains as relevant today as it ever was.

Drawing inspiration from her own life with three sisters, Alcott—who was born in 1832 and lived in an environment of financial tenuousness, burgeoning philosophical ideas, and then the Civil War—presented an honest, insightful collection of anecdotes that chronicled the passage from adolescence into adulthood for these four girls (and their mother, Marmee), each of whom presented her own distinctive model of womanhood. With that, Alcott created a runaway best-seller—the book was written in two parts; the first installment was so successful when it was published in 1868 that Alcott quickly produced a follow-up that was released the next year.

Alcott also forever changed the landscape of literary fiction. Taking the inner lives of girls seriously at that time amounted to a revolutionary act, and her nuanced, sensitive depiction of each of the sisters is part of what has led to the book’s remarkable staying power. At the story’s heart is the rebellious Jo, an aspiring writer who resents the notion that she should marry and instead longs to pursue her creative passions; she remains indelible among literary heroines.

Jo’s hunger for life, her principled recalcitrance, and her determination to live on her own terms have resonated across the ages in ways the author could never have anticipated. Alcott has become the godmother of some of modern culture’s most significant voices: Simone de Beauvoir, Gloria Steinem, J.K. Rowling, and numerous others. It’s rare to find a novel that has spoken so strongly to so many disparate thinkers.

The novel has touched every corner of American culture, inspiring books, movies, plays, operas, and various other sorts of interpretations and adaptations—including Oscar-nominated director and screenwriter Greta Gerwig’s new movie, with Saoirse Ronan in the role of Jo.

The story is beloved by readers around the world who have embraced Alcott’s deeply moral, emotionally complex tale, and many of whom have traveled to visit Orchard House, the Massachusetts home where she wrote Little Women. Today the house is a museum, a powerful time capsule of 19th-century life, and the fact that it continues to thrive is another testament to Alcott’s long-lasting appeal.

“It’s really about mothers, grandmothers, aunts, teachers, librarians passing this book down to the younger generation,” says Anne Boyd Rioux, a professor of English at the University of New Orleans and the author of 2018’s Meg, Jo, Beth, Amy: The Story of Little Women and Why It Still Matters. “It’s never been called the great American novel or anything like that, although it should be considered for that. Instead it’s been part of the underground, shadow canon, if you will, for female writers. It’s a book that’s been considered a rite of passage, I think, in growing up for girls. This is a book that will show you what your options are and to help you find yourself.”

If not for her own lineage, family life, and surroundings, Alcott might never have delivered such a compelling portrayal of life in the March household. Jo’s sisters and mother were fictionalized versions of Alcott’s own family. The fictional Mr. March and the real-life Amos Bronson Alcott, Louisa’s father, both had progressive attitudes toward women’s education and equality.

“Louisa was, by nature, a fighter whose rebellious spirit pervades Little Women,” says Eve LaPlante, the author of Marmee & Louisa: The Untold Story of Louisa May Alcott and Her Mother as well as a cousin of Louisa May Alcott’s and a great niece of Louisa’s mother, Abigail. “Louisa hated the limitations placed on her as a girl. She wanted to run; girls weren’t allowed. She wanted an education; only her male friends and cousins got that. She wanted to enlist to fight in the Civil War; women weren’t allowed. She wanted to vote . . . The list goes on. I think all that pain was funneled into Little Women, a cry of the heart fueled by Louisa’s desire to change things, to reform the world.”

Raised with the foundational belief that women were equal to men and just as entitled to speak their minds and follow their hearts, Louisa evangelized her feminist philosophy to anyone she encountered, and imbued that message into her most enduring narrative. Little Women encourages us all to live up to our potential, to pursue our dreams, and to embrace life to the fullest, no matter the obstacles we encounter—and reminds us to always, always hold close the ones we love.

Writing circa 1878 to a reader who had written to her seeking guidance, Alcott responded: “I can only say to you as I do to the many young writers who ask for advice—there is no easy road to successful authorship; it has to be earned by long and patient labor, many disappointments, uncertainties and trials. We all have our own life to pursue, Our own kind of dream to be weaving . . . And we all have the power To make wishes come true, As long as we keep believing.” — From Gina McIntyre’s introduction to Little Women: A Story for Every Generation.

The photos in this gallery are a sampling from the print edition of LIFE’s tribute to this touchstone of American literature. 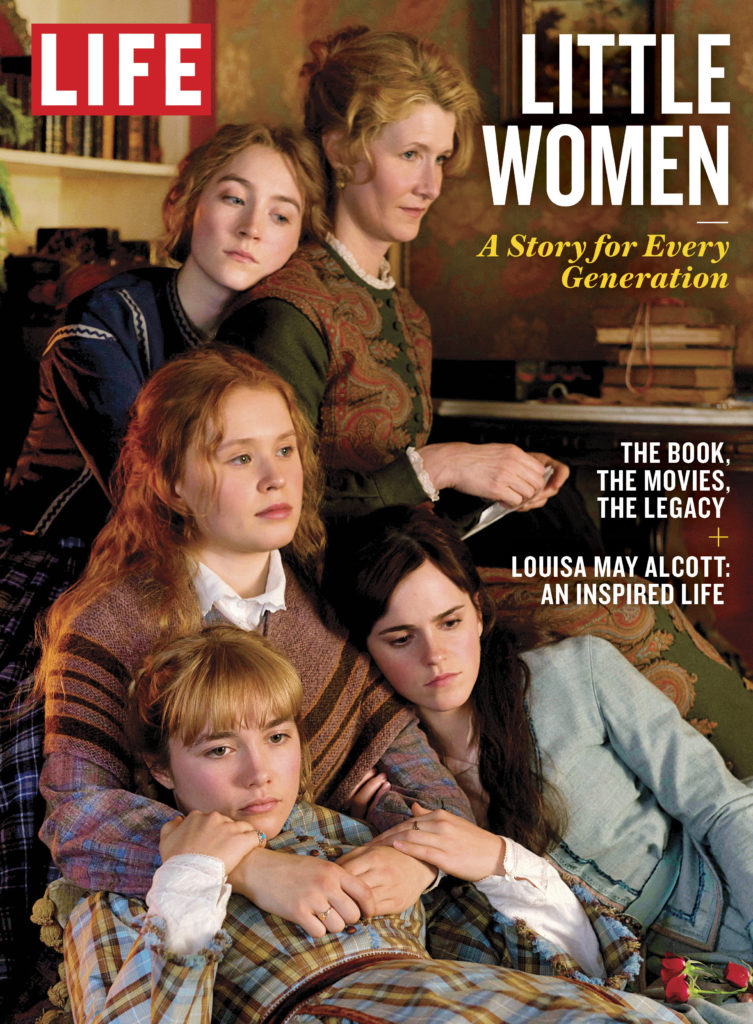 Little Women: A Story for Every Generation 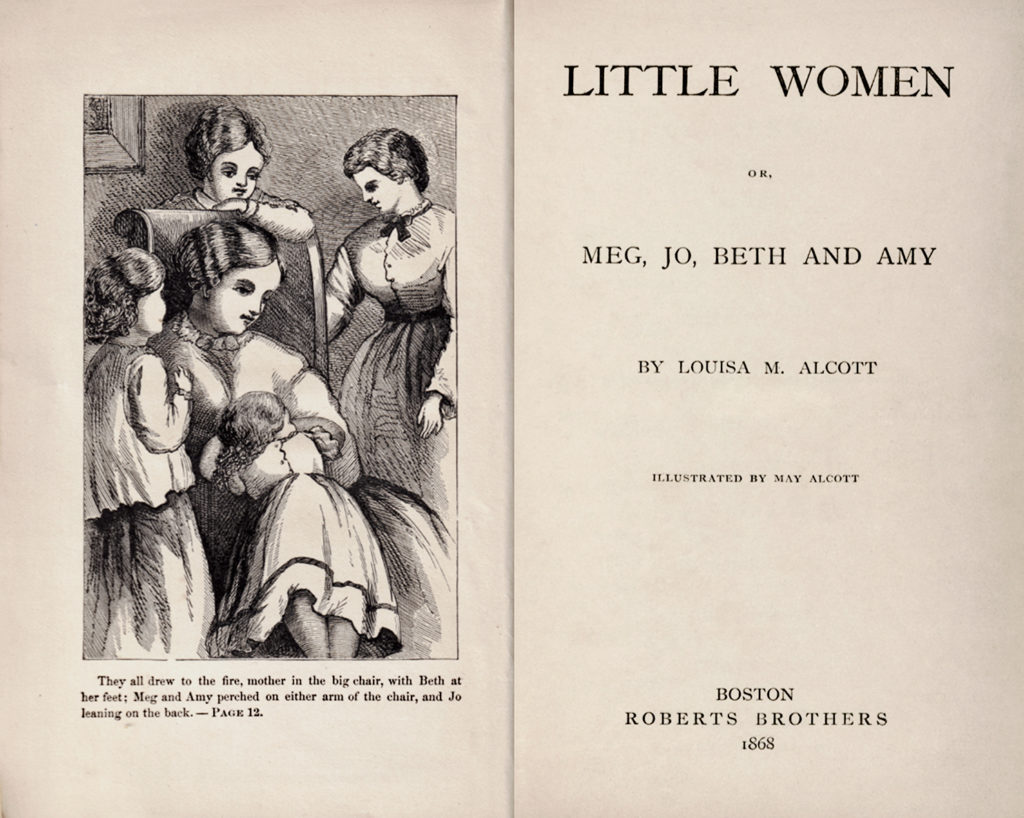 The frontispiece of the first edition of Little Women from 1868 featured an illustration by May Alcott. 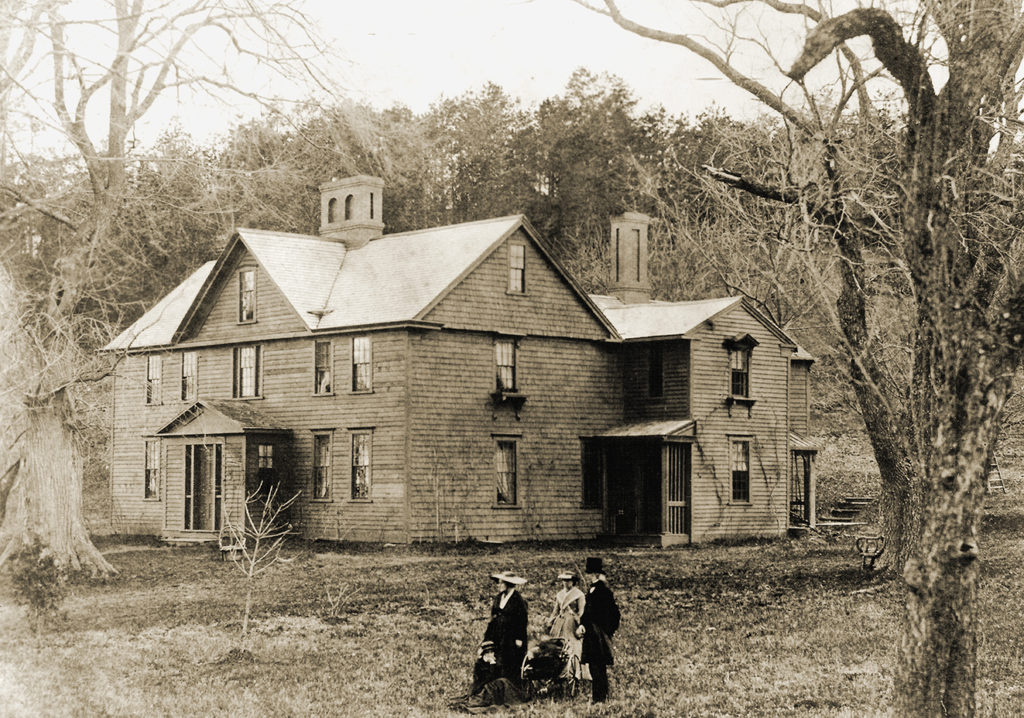 The Alcotts in 1865. Louisa is seated on the ground, while her mother, Abigail May Alcott, stands with her eldest daughter, Anna Alcott Pratt, Anna’s son Frederick in the stroller, and Bronson Alcott. This is the only existing image that shows most of the family together. 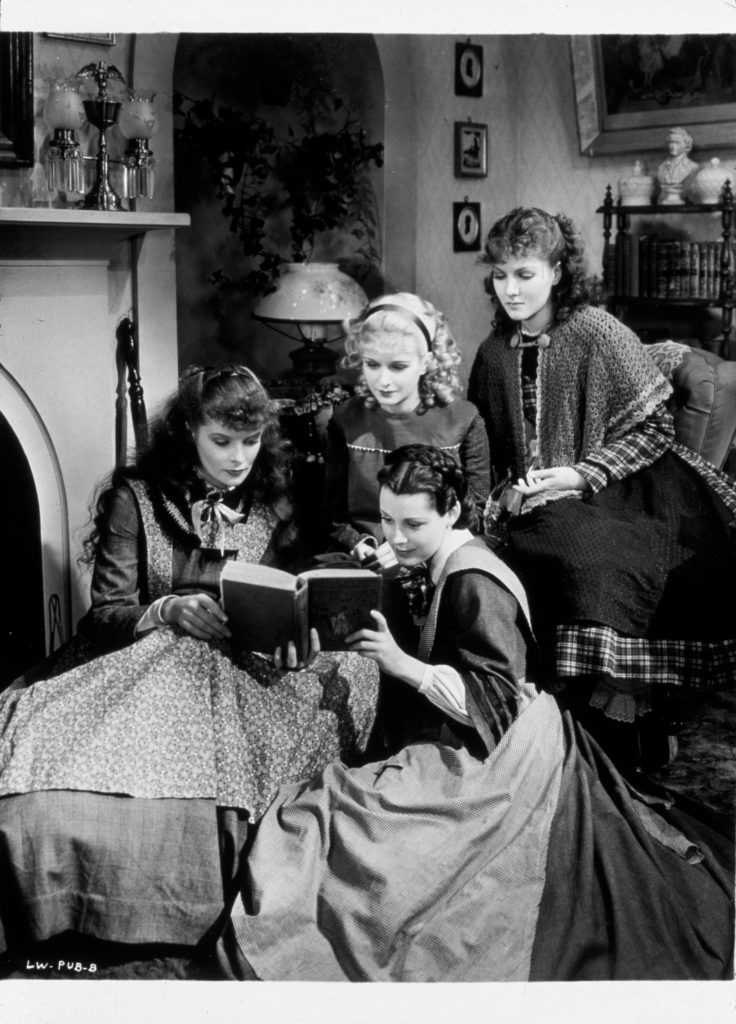 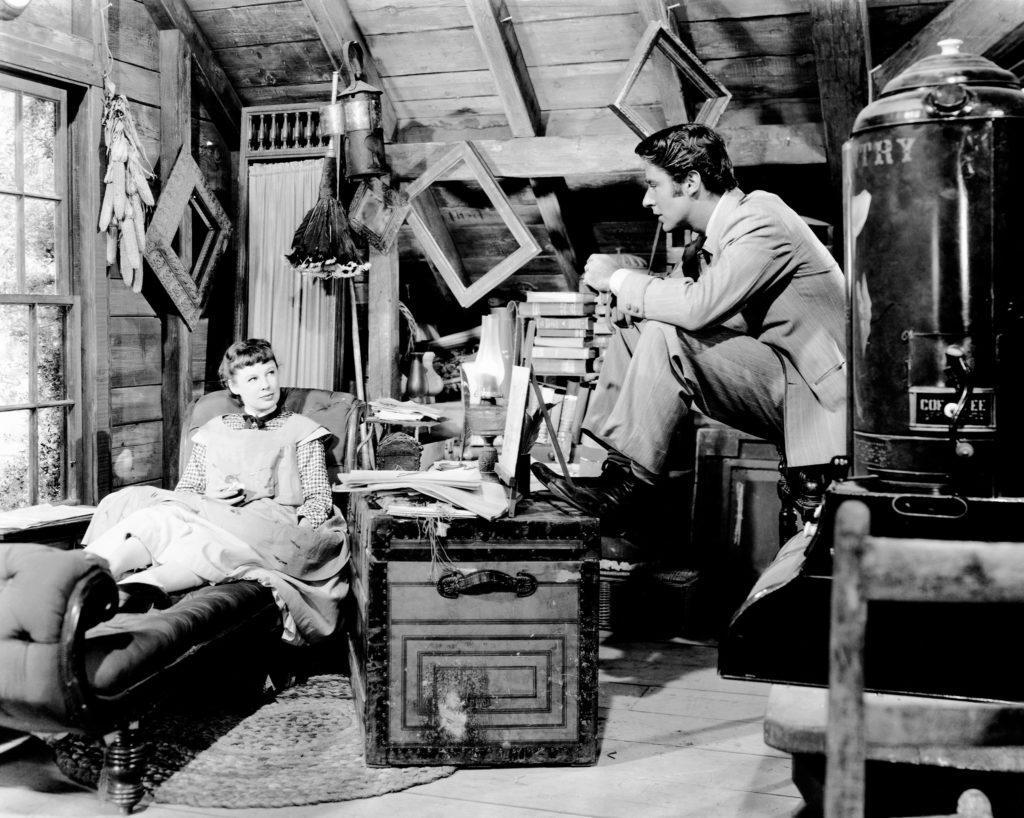 Jo (June Allyson) and Laurie (Peter Lawford) spent time in her attic In the 1949 film version. 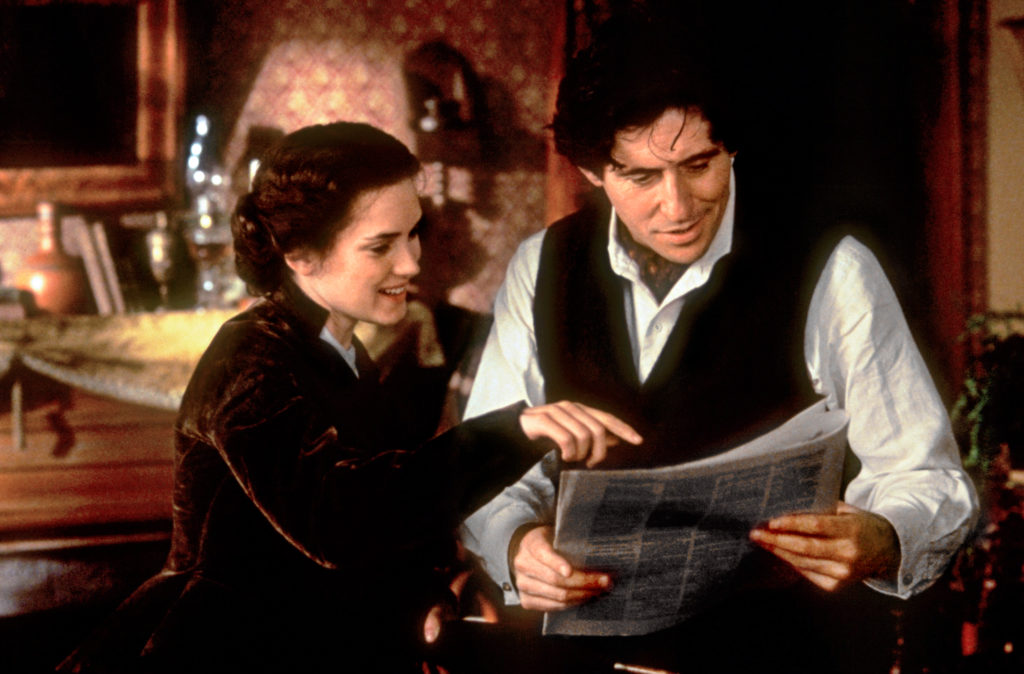 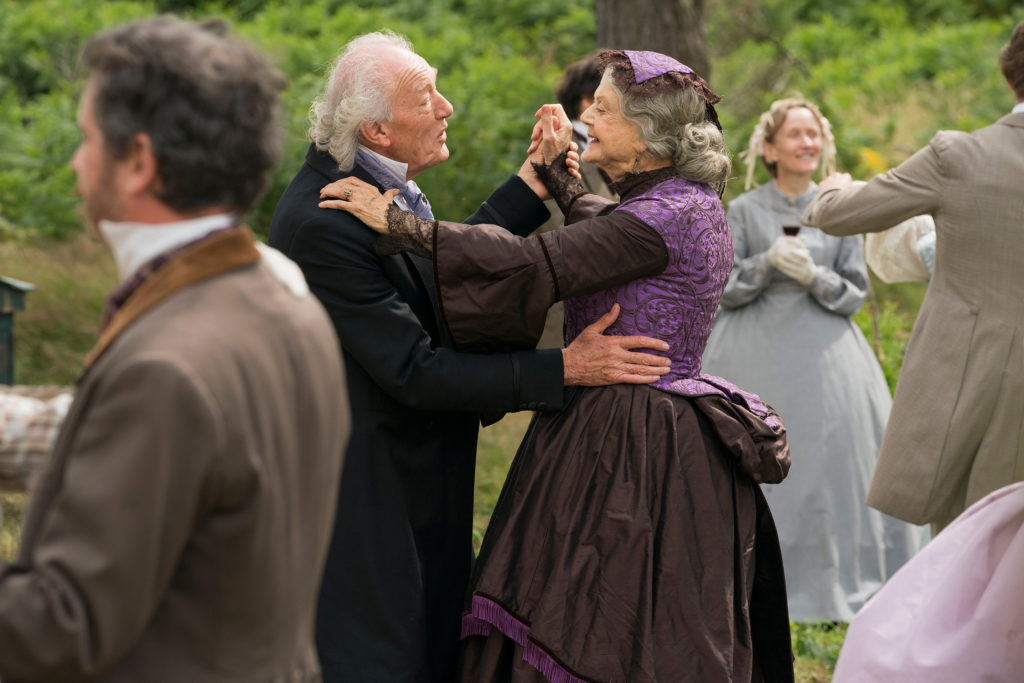 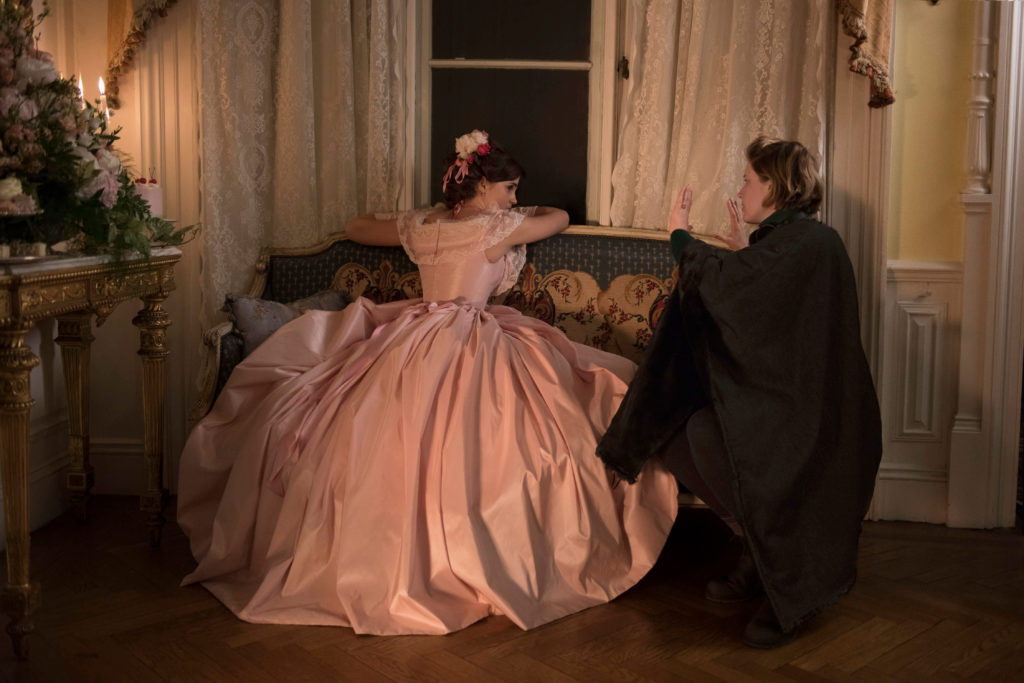 Emma Watson, playing Meg, received guidance from director/writer Greta Gerwig during the filming of the 2019 version of Little Women. 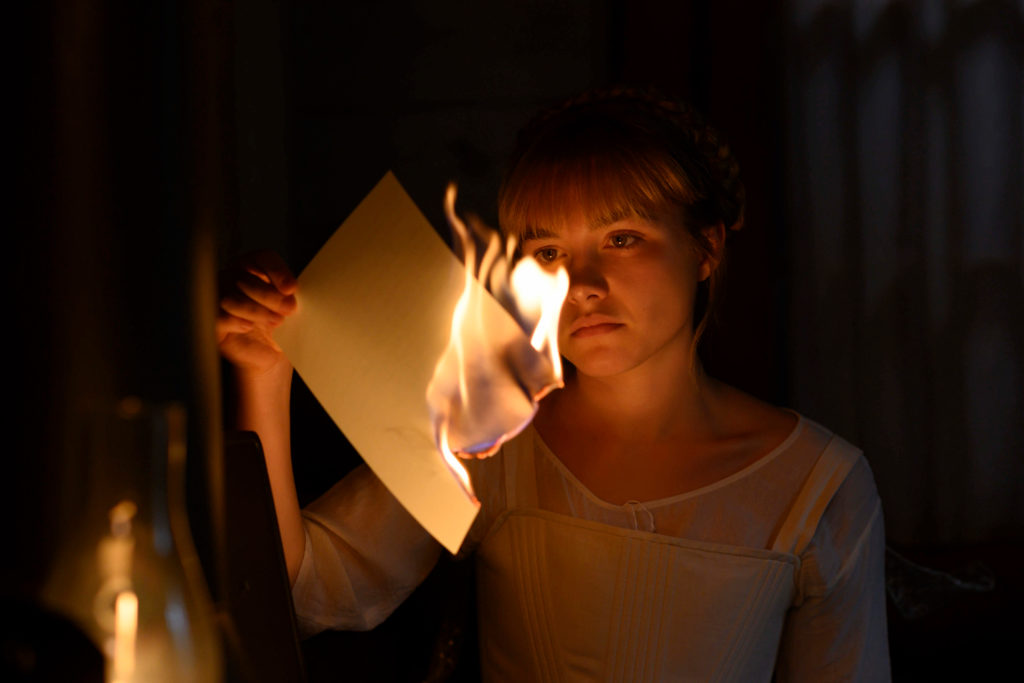 Florence Pugh, as Amy, burned Jo’s manuscript in a fit of rage in the 2019 film version of Little Women. 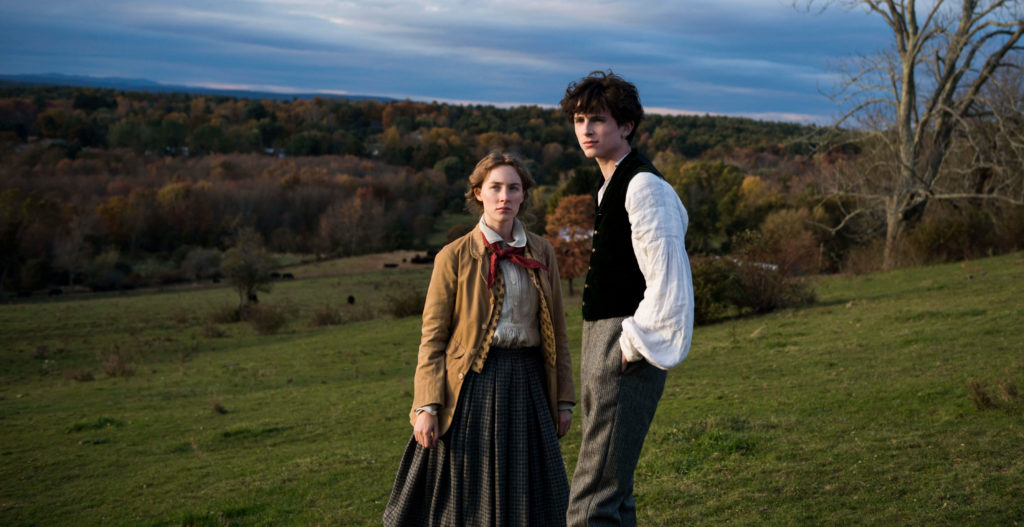 Saoirse Ronan as Jo and Timothee Chalamet as Laurie in the 2019 version of Little Women.

Orchard House, the childhood home of Louisa May Alcott in Concord, Mass., served as the setting for Little Women. 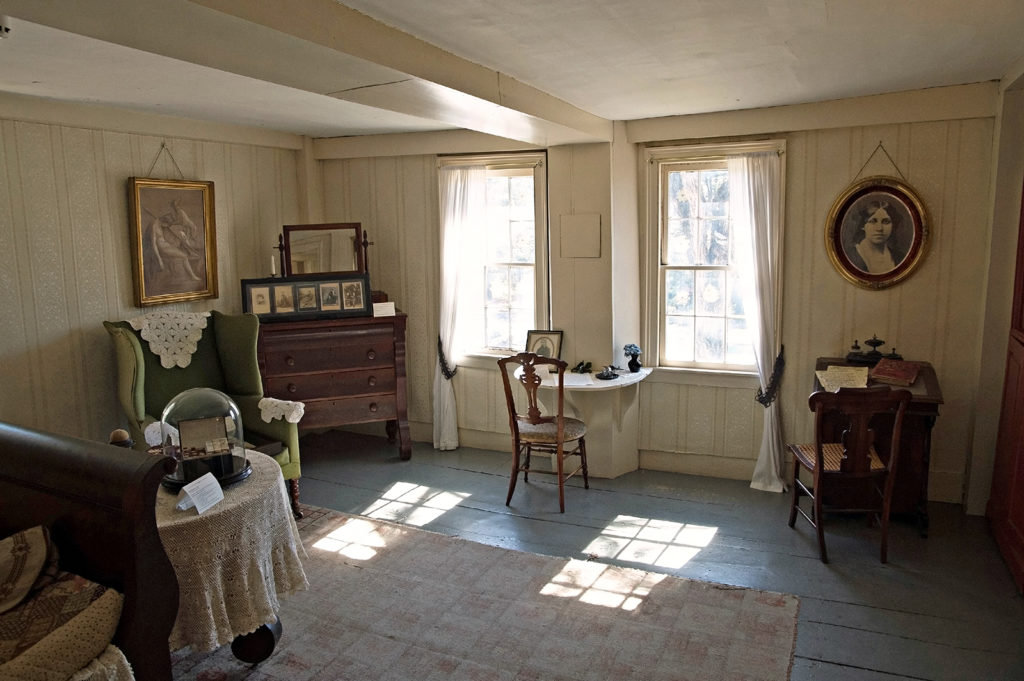 Louisa’s writing desk, built by her father, has a prominent place in her room at Orchard House, Concord, Mass.