The heroes of Miracle on 34th Street—John Payne as Fred Gailey, Maureen O’Hara as Doris Walker, Natalie Wood as Susan Walker, and Edmund Gwenn as Kris Kringle—gather at a Christmas party near the movie’s climax.

The following is from LIFE’s new special issue about Miracle on 34th Street, available at newsstands and online:

One of the defining moments of the 1947 film Miracle on 34th Street comes early on, after Kris Kringle has been hired by Macy’s to be the department store’s Santa. The Macy’s toy department manager doesn’t recognize Kris as the real thing, but he sees the potential to make money off him. “I just know with that man on the throne, my toy department will sell more toys than it ever has,” Julian Shellhammer says. “He’s a born salesman. I just feel it.”

He’s not wrong, either. But Shellhammer goes too far when he gives Kris a list of overstocked toys to push on the children. “Now you’ll find that a great many children will be undecided as to what they want for Christmas,” Shellhammer counsels. “When that happens, you immediately suggest one of these items.”

At this moment, viewers see a clear divide between Kringle and Shellhammer. Although Kringle has already embraced holiday shopping—playing the role of Santa in Macy’s Thanksgiving Day Parade and accepting a job at the department store behemoth—we now see where Kringle draws the line. “Imagine making a child take something he doesn’t want just because [Shellhammer] bought too many of the wrong toys,” Kringle muses as he rips up the list. “That’s what I’ve been fighting against for years—the way they commercialize Christmas.”

When the movie came out in 1947, the commercialization of Christmas had been going on for some time. The holiday shopping season was firmly entrenched in American society. Shoppers hit department stores en masse, and holiday spending became a key driver of the consumer economy. One sign of the gathering frenzy had come in 1912, when progressive labor reformers openly urged shoppers to plan ahead and do their holiday shopping as early as possible to lighten the load for retail staff. “Thousands of workers in every city have been taught by bitter experience to look forward to Christmas with dread,” the Consumers’ League of New York lamented in a magazine advertisement that year. “Every shop girl knows that the coming Christmas season will mean to her an immense amount of extra work, of nervous strain and exhaustion. The great army of workers whom you do not see—the bundle wrappers, drivers and errand boys—look forward to Christmas as a hateful time of undeserved effort and hardship.” Shopkeepers worked to attract the bustling holiday crowd to their stores by offering a wide range of Christmas-themed goods, and children’s toys—stuffed toys, dolls, train sets—were especially popular.

By the mid-1940s—the era that sparked Miracle on 34th Street—the U.S. economy was kicking into high gear after the Great Depression, in part due to production required during World War II. With the war over, jobs were plentiful and wages higher. And, because of the lack of consumer goods during the war, Americans were eager to spend. The postwar years were also the beginning of the baby boom, which would push the demand for children’s goods even higher.

In Miracle, Kringle, rather than following Shellhammer’s cynical directive to push overstocked toys on disappointed children, performs the ultimate act of customer service by pointing shoppers to competing stores that do carry the toys they want. The Macy’s manager is at first horrified—until parents congratulate him on this new marketing tactic and promise they’ll be loyal Macy’s shoppers from now on. The fictional “Mr. Macy” declares the new store motto will be “to place public service ahead of profits”—in the name of making a bigger profit than ever.

The resolution shows how Miracle is hardly a deep critique of holiday consumerism. In some ways, it’s closer to an embrace. Kringle knows where to send kids for the toys they want because he has an expansive knowledge of New York City’s stores and their toy inventory. He simply puts kids’ toy preferences over the profits of one store in particular. In the movie’s climax the ultimate Christmas gift is the consummate act of middle class spending—the purchase of a house. In this case, consumerism isn’t a nefarious concept but instead one that signals security and a means for a new family to come together in comfort. The Kris Kringle of Miracle may be put off by a world fraught with profit margins and clearance sales, but he also knows that, when done thoughtfully and with a sprinkle of faith, Christmas and gift-giving go together like milk and cookies.

Here are a selection of photos from LIFE’s new special issue about Miracle on 34th Street: 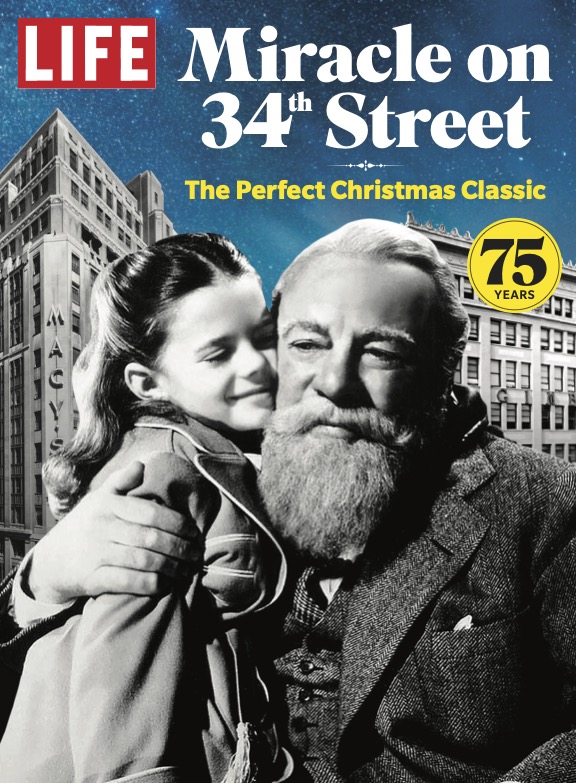 The heroes of Miracle on 34th Street—John Payne as Fred Gailey, Maureen O’Hara as Doris Walker, Natalie Wood as Susan Walker, and Edmund Gwenn as Kris Kringle—gather at a Christmas party near the movie’s climax. 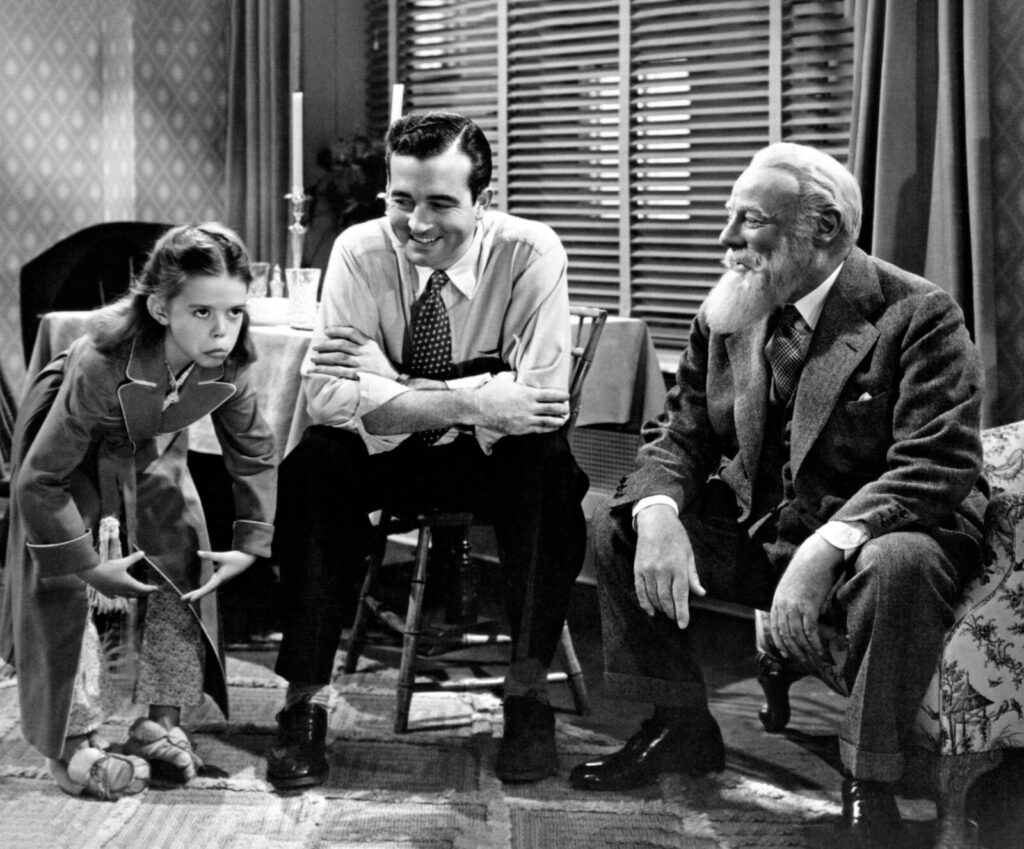 Kris Kringle (Edmund Gwenn) brings out the playful side of Susan Walker (Natalie Wood) and shows her the joy of make-believe as Fred Gailey (John Payne) looks on in the 1947 film Miracle on 34th Street. 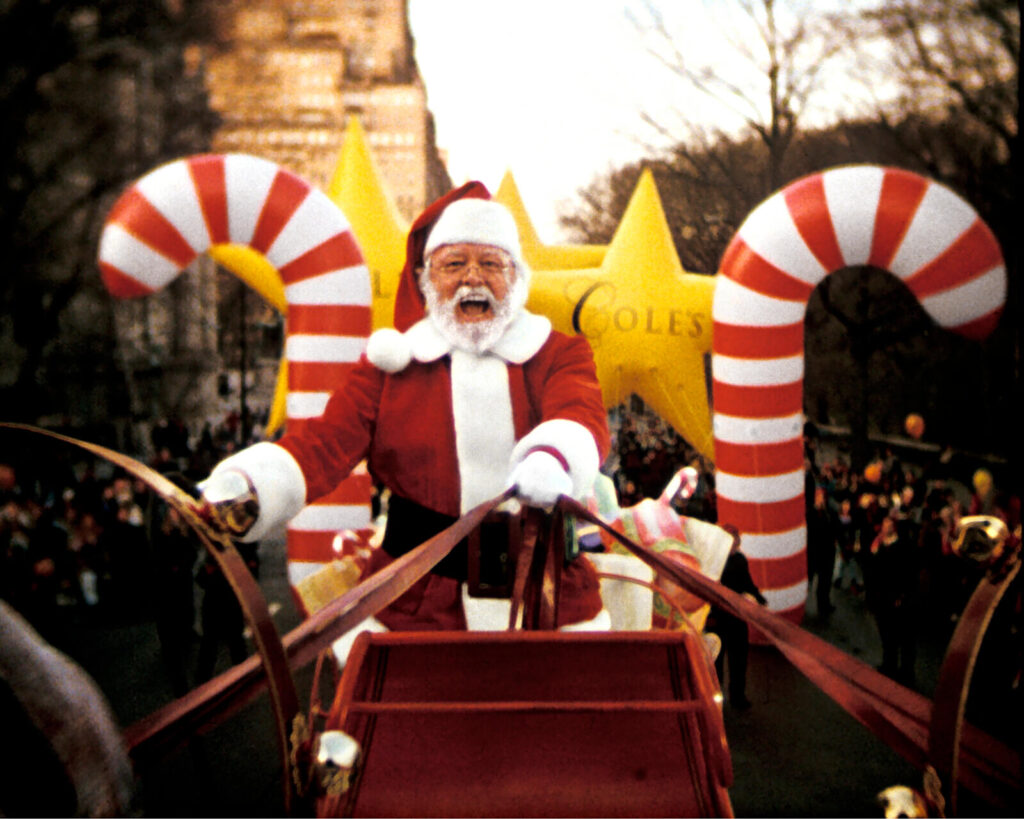 Richard Attenborough took on the role of Kriss Kringle in the 1994 remake of Miracle on 34th Street. 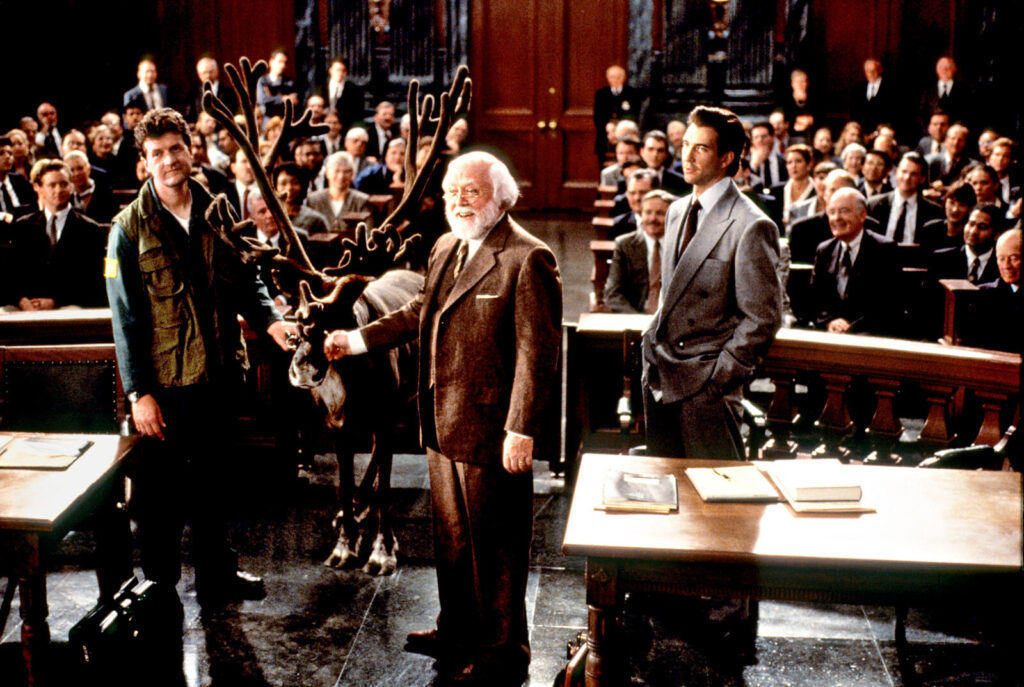 In the 1994 remake of Miracle on 34th Street, Dylan McDermott (right), in the role of Bryan Bedford, defended Kriss Kringle in the movie’s trial scene. 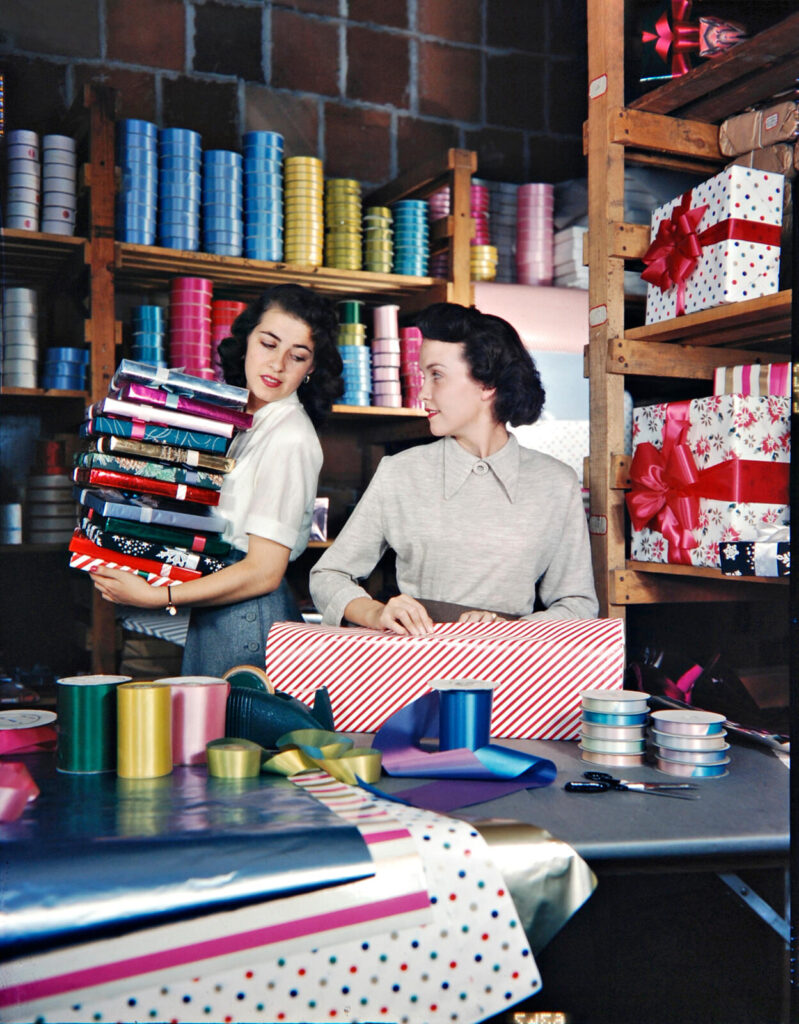 The wrapping department at Macy’s was busy during Christmastime in 1948. 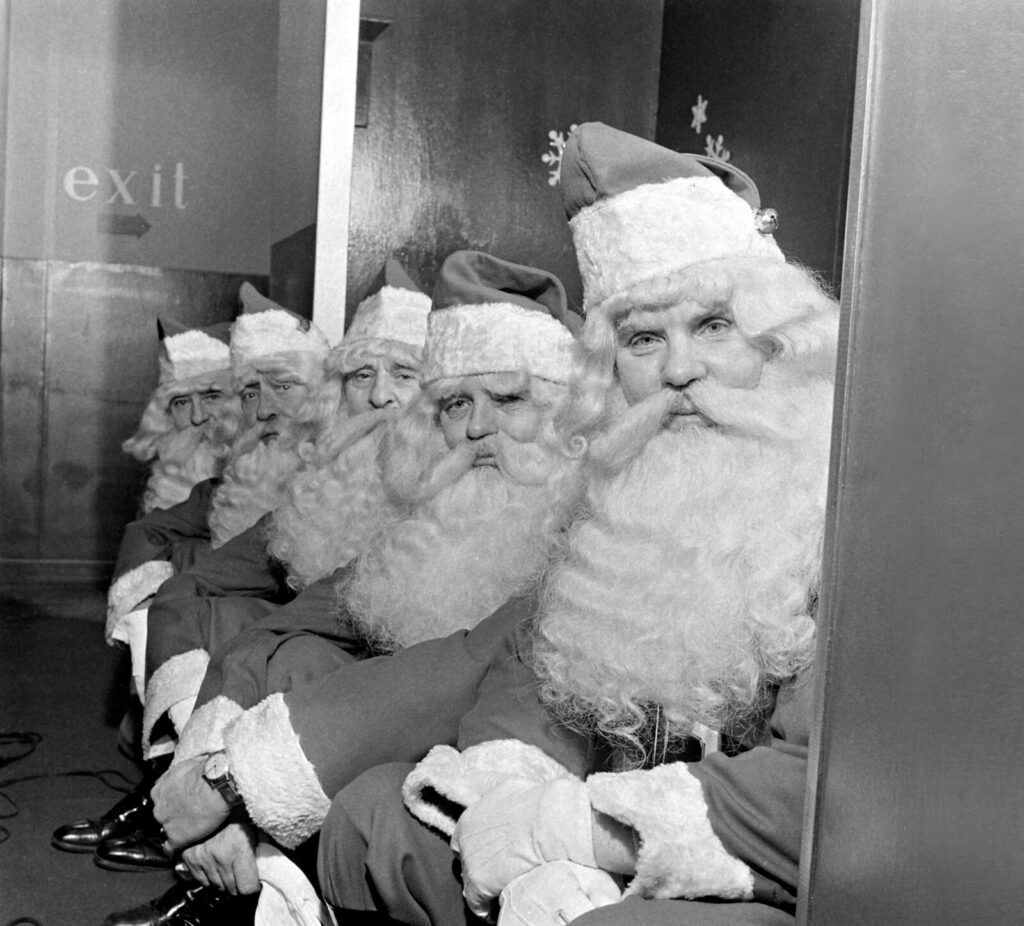 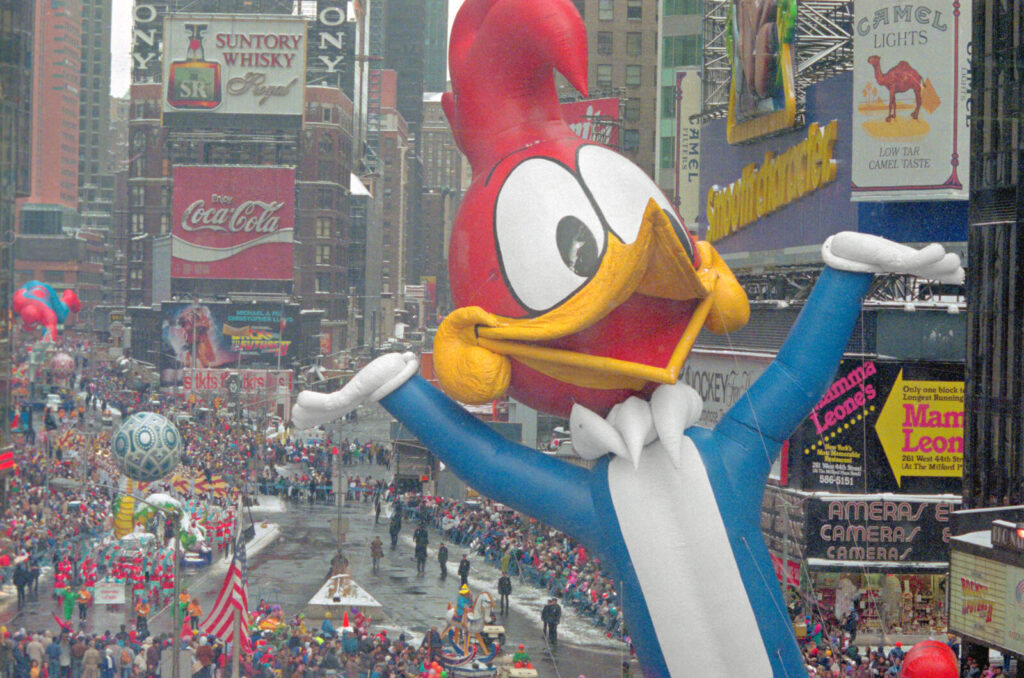 Woody Woodpecker delighted the crowds at the Macy’s Thanksgiving parade in 1989; the store and its parade were integral settings in the 1947 movie Miracle on 34th Street.