Fred Rogers entertained children during a Mister Rogers’ Day celebration at the University of South Dakota in 1973.

Whatever turbulence roiled the world or their families, millions of young viewers found security and unconditional love in their visits to Mister Rogers’ Neighborhood during the show’s run from 1968 to 2001. At a time when children’s programming was speeding up, Fred Rogers slowed down, offering puppets who expressed children’s fears, as well as messages of love through music. Instead of presenting his children a curriculum of ABCs and counting, he cultivated in small viewers a sense of wonder and self-confidence.

To some present-day commentators, Rogers is at least partly responsible for the culture of entitlement among millennials, but there are few who don’t long for a Rogers-like figure to redirect children’s fare to the values of Mister Rogers’ beloved neighborhood. He remains a unique figure in the history of American media, celebrated for his contributions not just to television but to education and civility as well. Since his death in 2003, Rogers has been the subject of two biographies, an acclaimed documentary (Morgan Neville’s Won’t You Be My Neighbor?) and the 2019 Hollywood biopic A Beautiful Day in the Neighborhood, starring Tom Hanks. At a time when the nation feels angry and divided, Rogers’ guiding philosophy of loving tolerance and acceptance appeals more than ever.

Rogers grew up in Latrobe, Pa., about 40 miles from Pittsburgh. His parents were loving, but Rogers was bullied by classmates, and his only real friends were his music, puppets, books and his imagination. He certainly never forgot, and perhaps never shed, those childhood feelings of being an outsider, and they shaped his life as an adult.

Rogers’ eureka moment arrived in 1951, while visiting Latrobe on a break during his senior year of college. Walking into his parents’ home, Rogers discovered they had bought a television, one of the first ones in town. Instead of pursuing a career in music—he had been majoring in music composition—Rogers switched gears and applied for an entry-level position with NBC in New York. Within a few years, he would return to Pennsylvania, where he would produce and write The Children’s Corner, a new public television show for young people. In that show he developed an approach that would define Mr. Rogers’ Neighborhood when it debuted in 1968.

“I’ll never forget the sense of wholeness I felt when I realized what, in fact, I really was,” Rogers said years later. “Not just a writer or a language buff or a student of human development or a telecommunicator, but I was someone who could use every talent that had ever been given to me in the service of children and their families.”  —from Richard Jerome’s introduction to Mister Rogers: The Magical World of an American Icon

The images below are a selection from LIFE’s celebration of Fred Rogers. 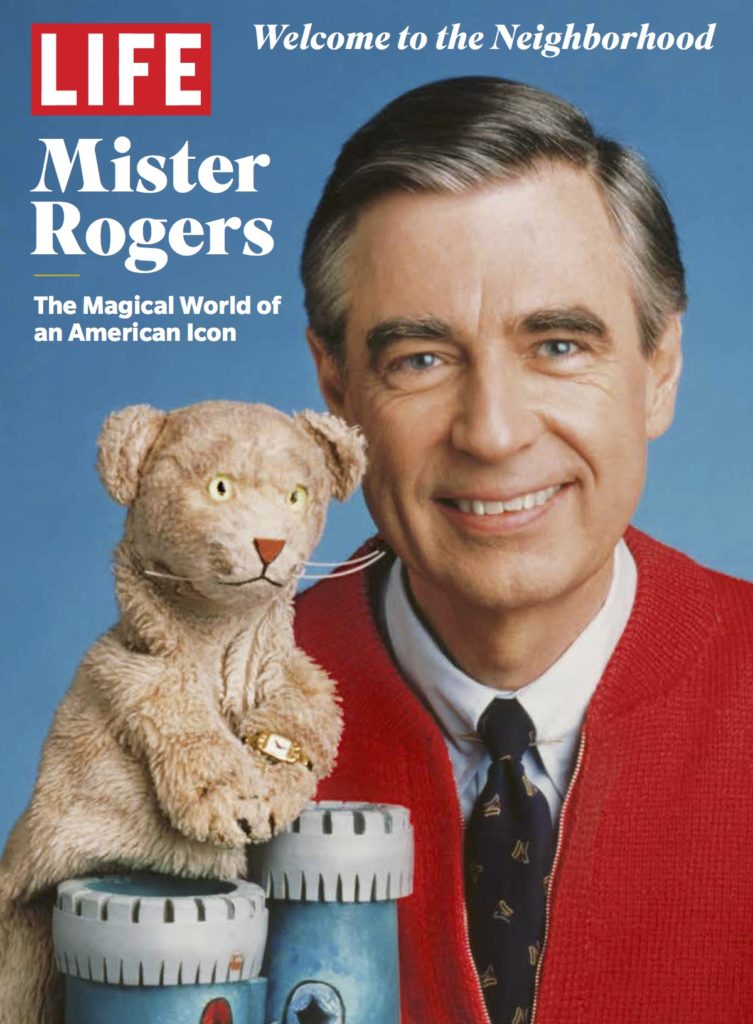 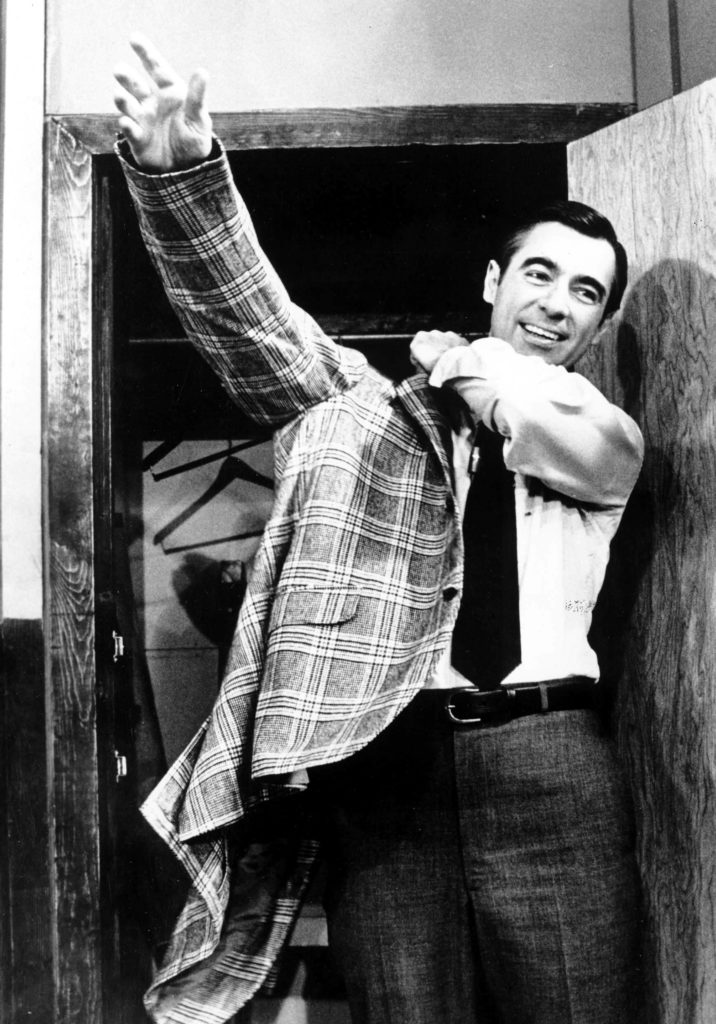 Mister Rogers’ closed shows by telling children, ”You’ve made this a special day for me by your being you.” 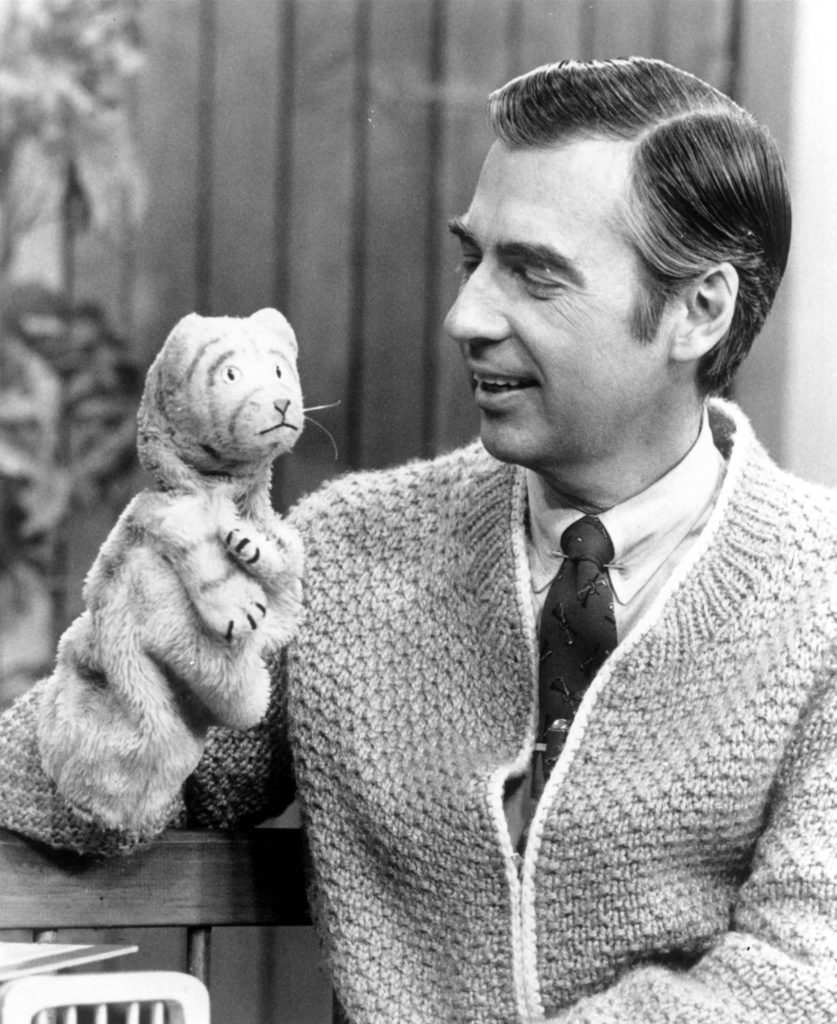 Inhabitants of Mister Rogers’ neighborhood included puppets such as Daniel Striped Tiger, which he created in 1954 while working on The Children’s Corner. 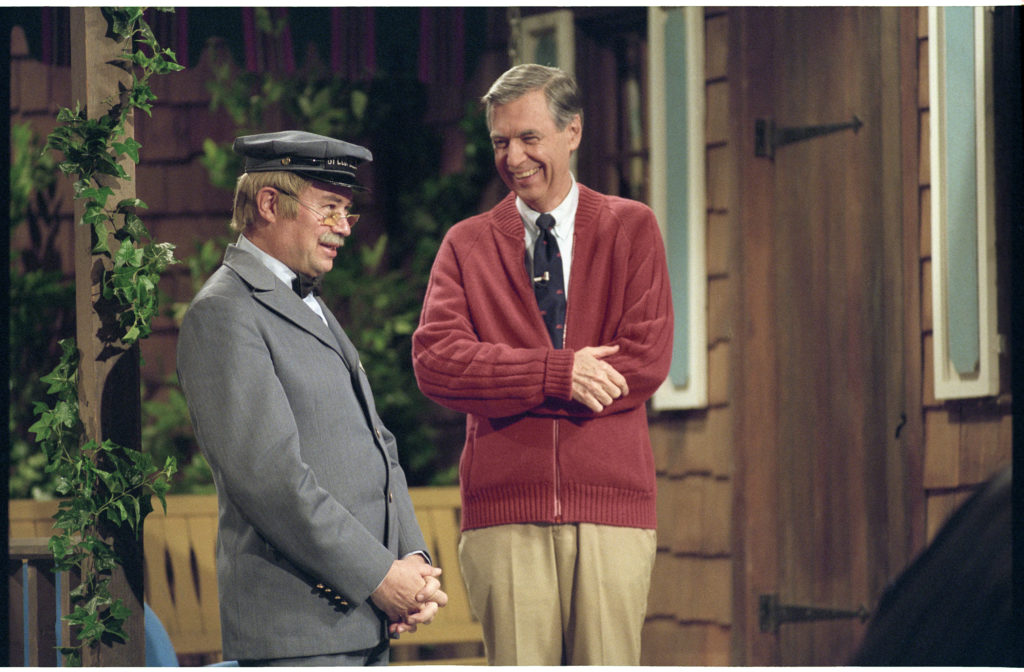 Mr. McFeely, one of the show’s regulars, was, unlike Mister Rogers, always in a hurry. 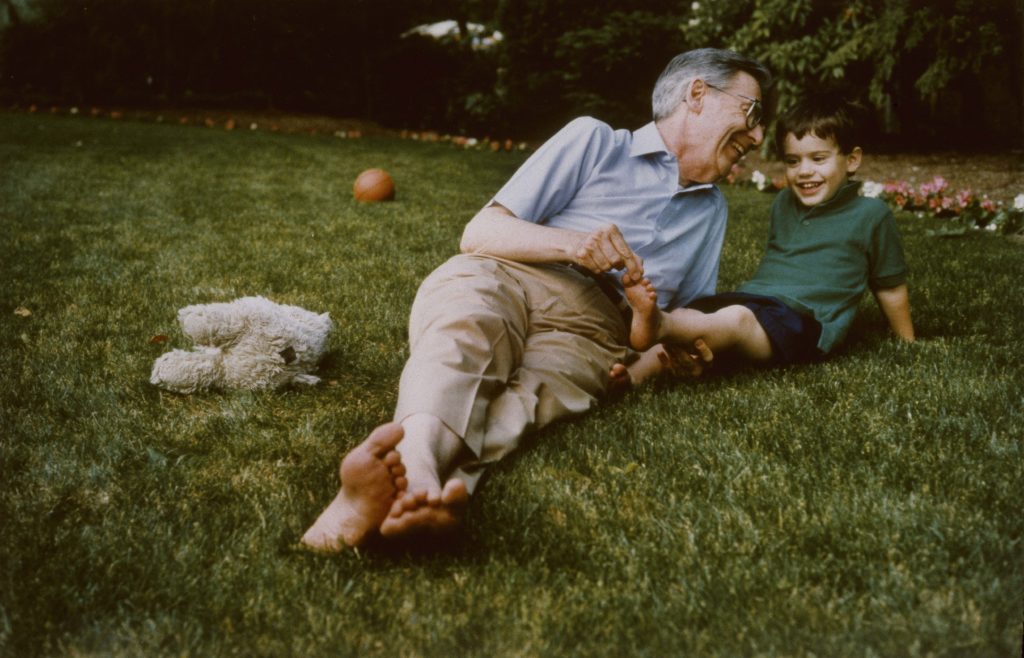 In 1992 Fred Rogers relaxed with his grandson, Alexander, who was then four years old, and played “this little piggy had tofu.” 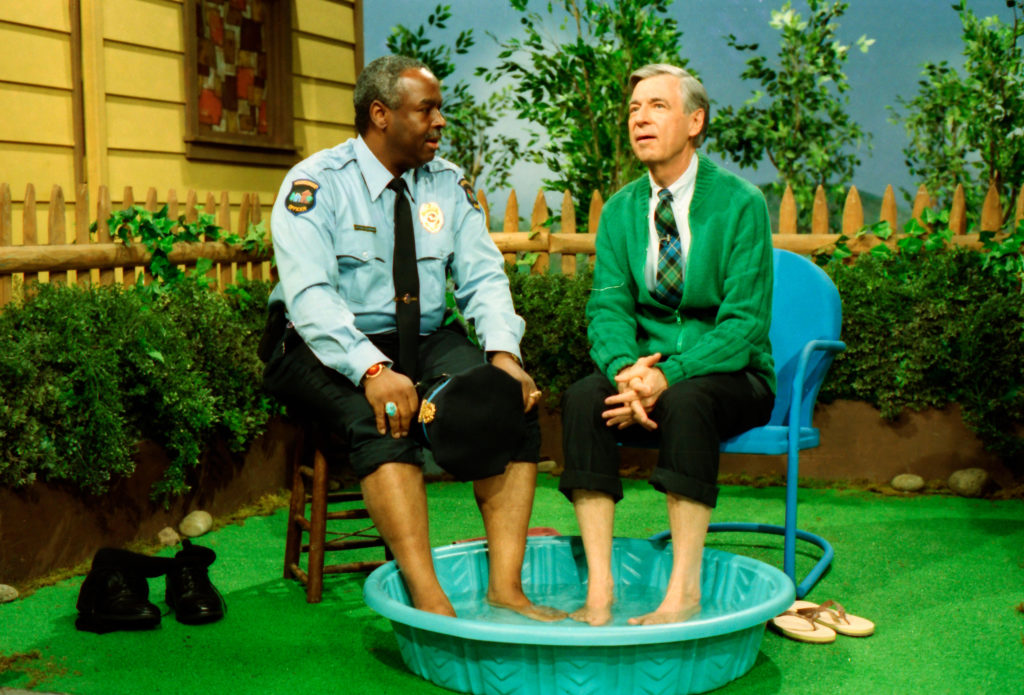 In 1993 Mister Rogers and Officer Clemmons dipped their feet in the same pool, recreating an historic moment from a 1969 episode of the show, when the two made a statement against segregation. 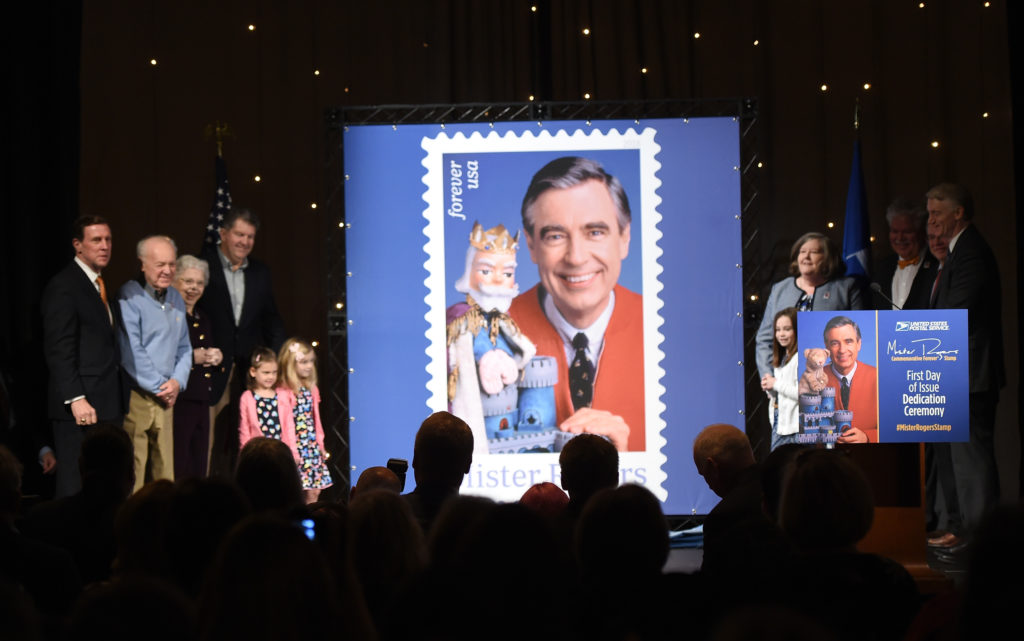 In 2018 Joanne Rogers and other family members posed at a ceremony celebrating the release of a stamp honoring her late husband. 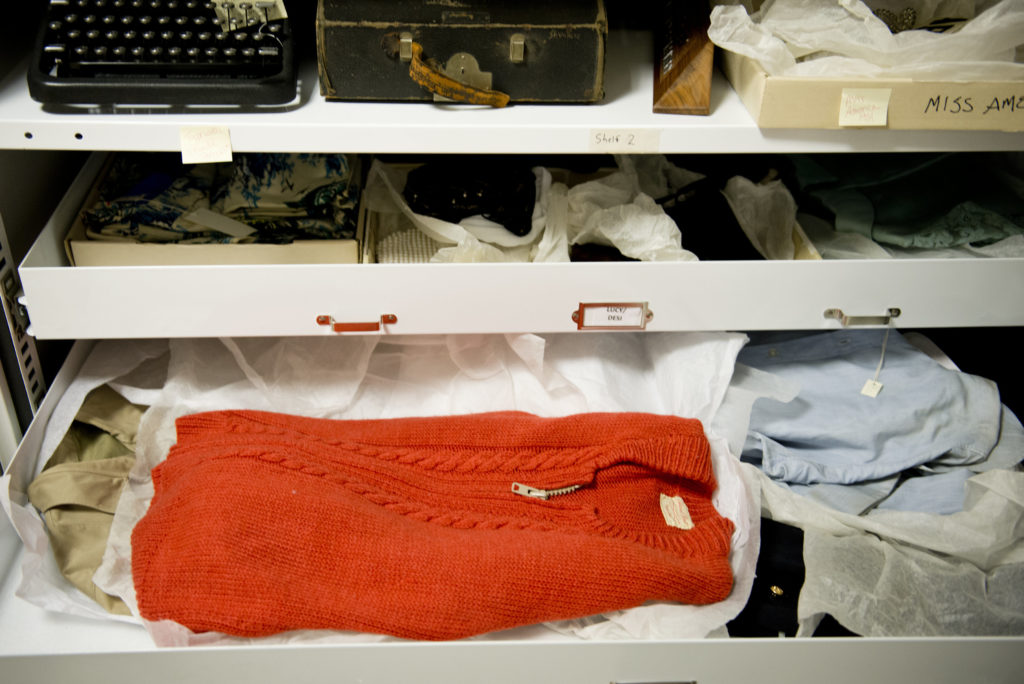 The Smithsonian claimed this red sweater of Mister Rogers, knitted by his mother, for the collection at its American History Museum. 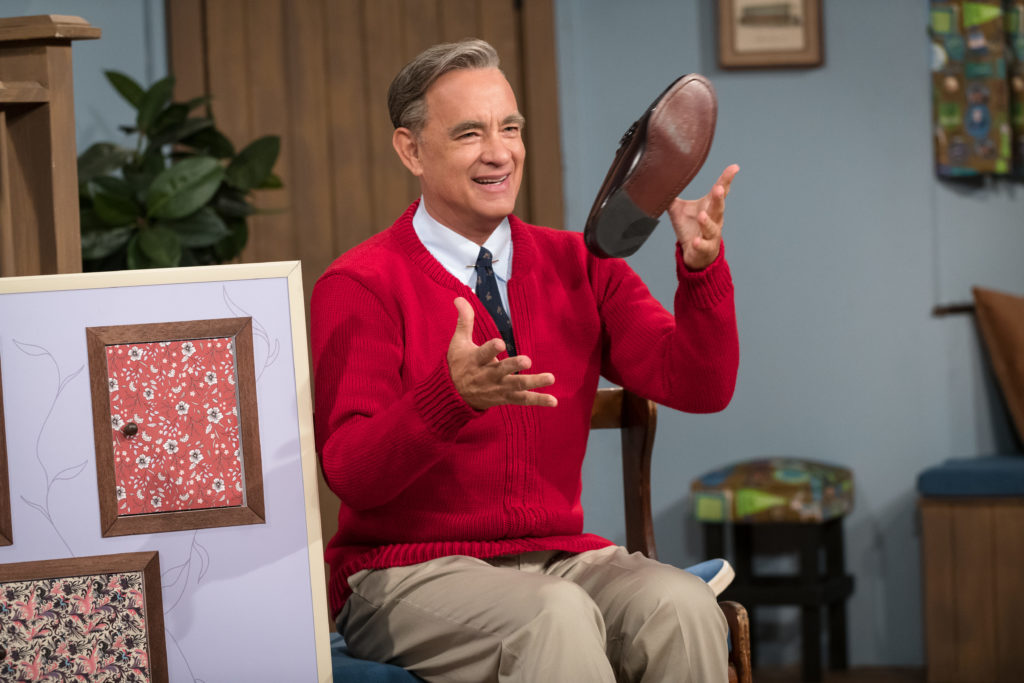 Tom Hanks, portrayer of such iconic figures as Forrest Gump, Walt Disney and Sully Sullenberger, took on the role of Mister Rogers for the 2019 film A Beautiful Day in the Neighborhood.