LIFE at the Oscars: Classic Photos From Hollywood’s Biggest Night

Elizabeth Taylor walked through a crowd of admirers at the Oscars in 1961 the year she won her first Academy Award, for her role in BUtterfield 8.

John Wayne (whose image is being projected on the huge screen) accepted the Best Director Oscar from Olivia DeHavillan for an absent John Ford during the 25th annual Academy Awards in 1953 the first year the ceremony was televised.

Audrey Hepburn. Marlon Brando. Elizabeth Taylor. Kirk Douglas. Grace Kelly. Bogart and Bacall . . . you get the picture. And during the Golden Age of Hollywood, when it came to the Academy Awards, LIFE got the picture, too over and over again.

In fact, from the red carpet to the stage to the after-parties (where tuxedos and gowns were de rigueur) there were few noteworthy Oscar moments that LIFE missed. Here, in honor of Hollywood, actors, actresses and the magic of movies in general we’re fans, after all LIFE.com offers a selection of Oscar photos that capture not only the familiar glitz and glamor of the proceedings, but those far rarer moments when a superstar drops his or her guard and, for an instant, we see someone who seems remarkably like us albeit better-looking, richer, and with more charisma than most of us could summon in a lifetime of trying.

(Trivia note: There are various, competing stories around the origin of the name “Oscar” as a designation for the coveted statuette. Some historians believe that Bette Davis, of all people, coined the term because the statue resembled — so the story goes — her first husband, band leader Harmon Oscar Nelson. Another creation myth has it that a secretary to the great Golden Age studio head Louis B. Mayer saw the very first Academy Award statuette and pronounced it a dead ringer for Norway’s King Oscar II. No one, however, has ever definitively nailed down who first uttered the name Oscar in connection with the Academy Awards. And part of us hopes no one ever does.) 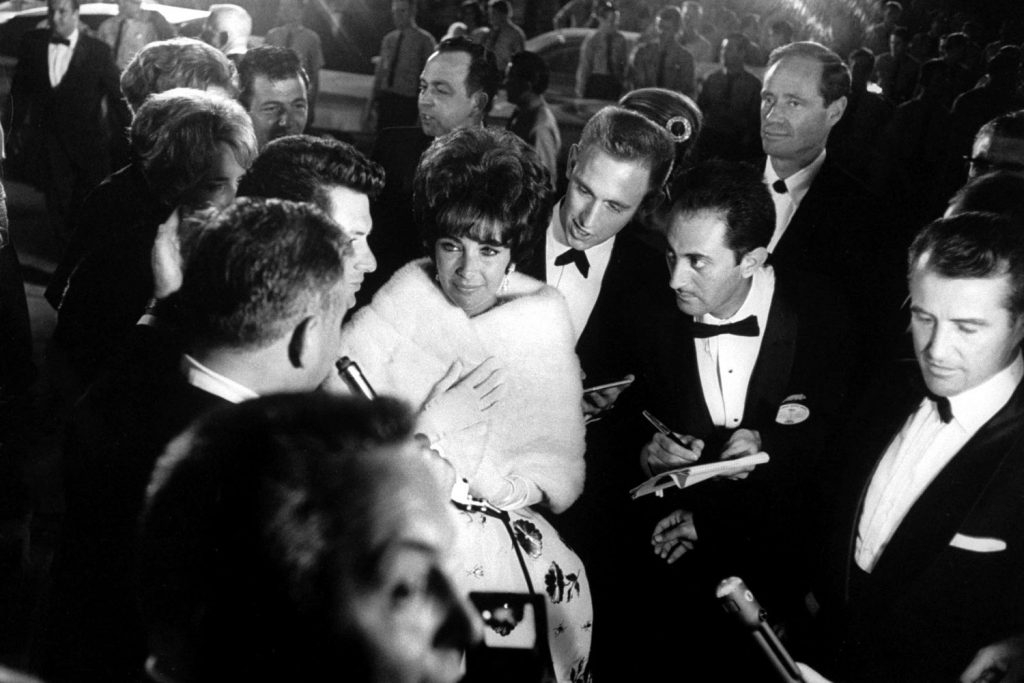 Elizabeth Taylor walked through a crowd of admirers at the Oscars in 1961 the year she won her first Academy Award, for her role in BUtterfield 8. 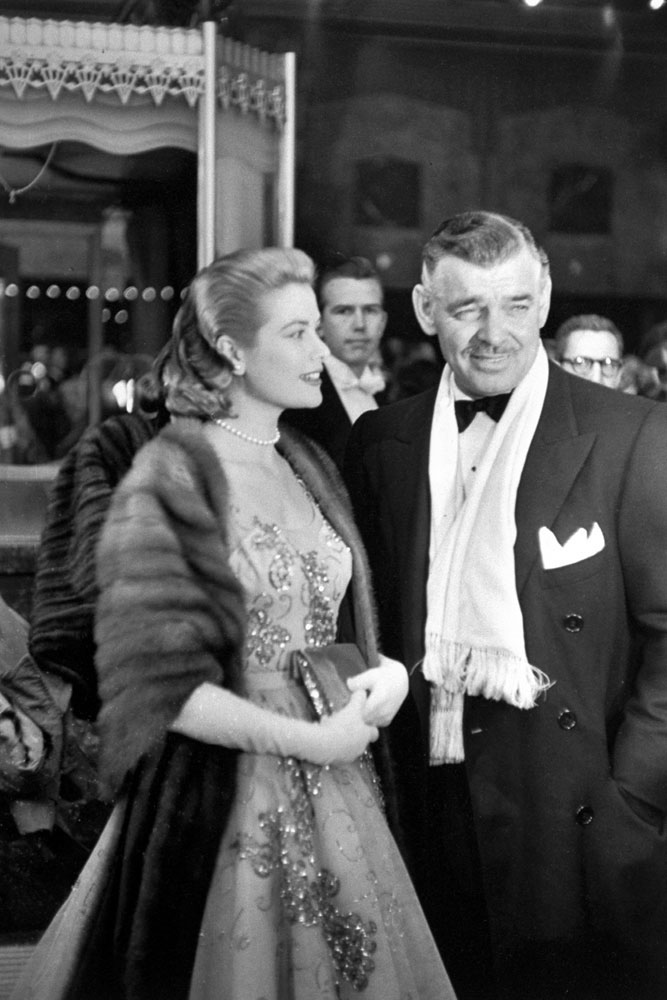 Grace Kelly and Clark Gable arrived at the 26th annual Academy Awards at the RKO Pantages Theatre in 1954. 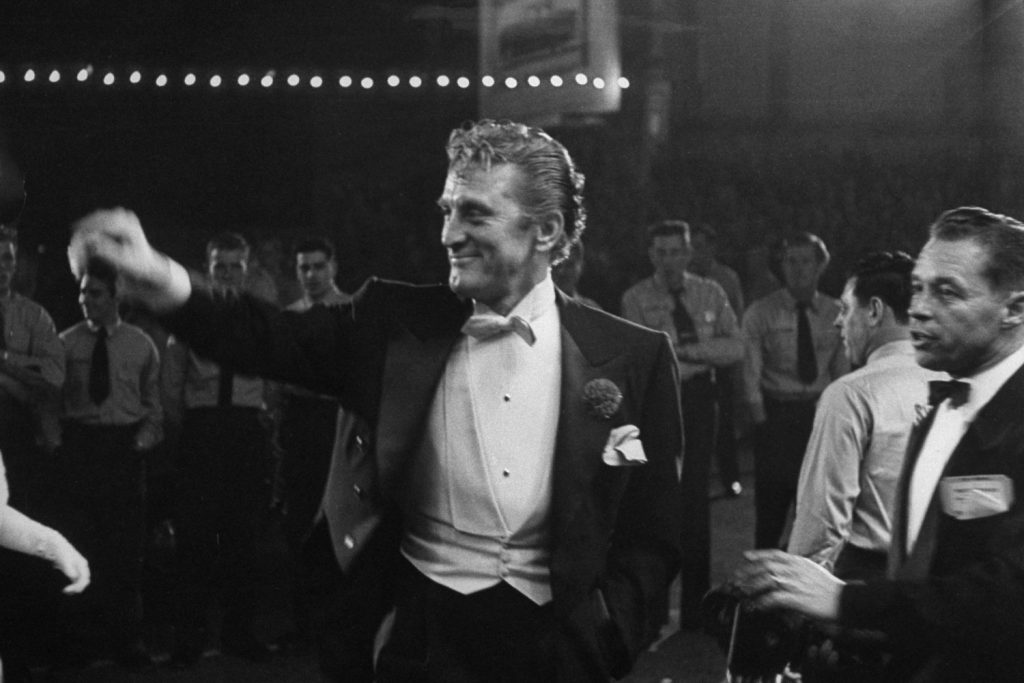 Kirk Douglas at the Academy Awards in 1954 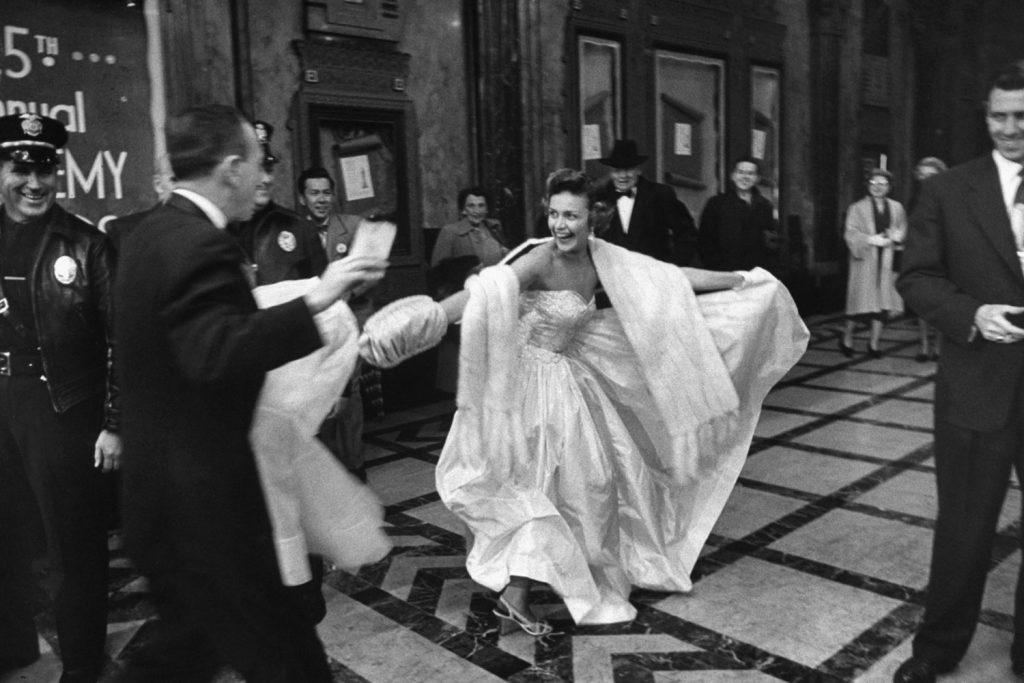 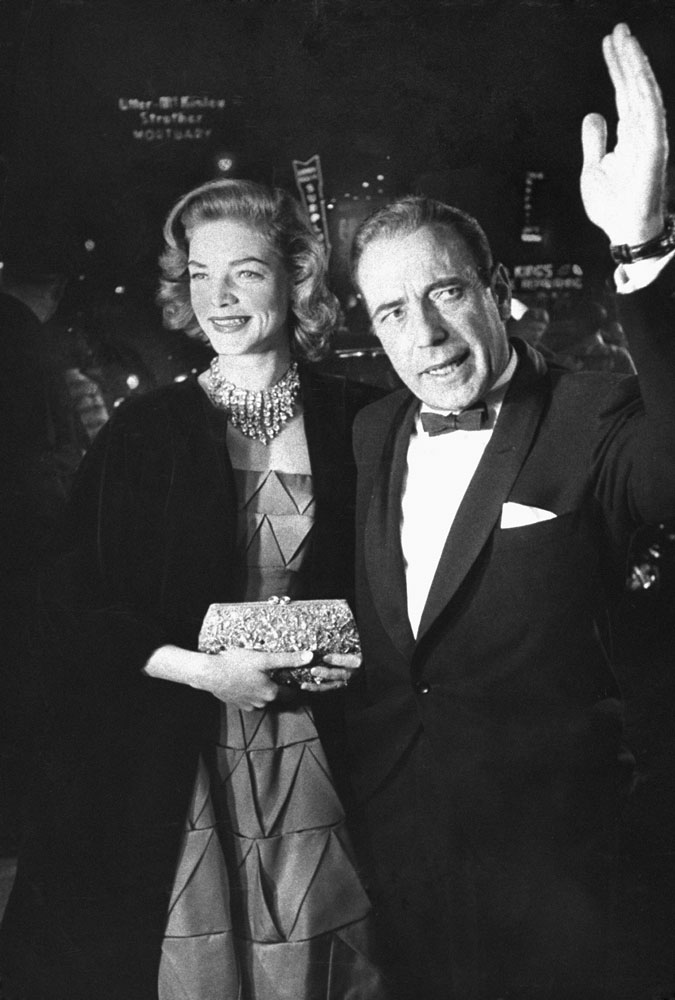 Humphrey Bogart and his wife Lauren Bacall arrived at the 27th annual Academy Awards at the RKO Pantages Theater in 1955. 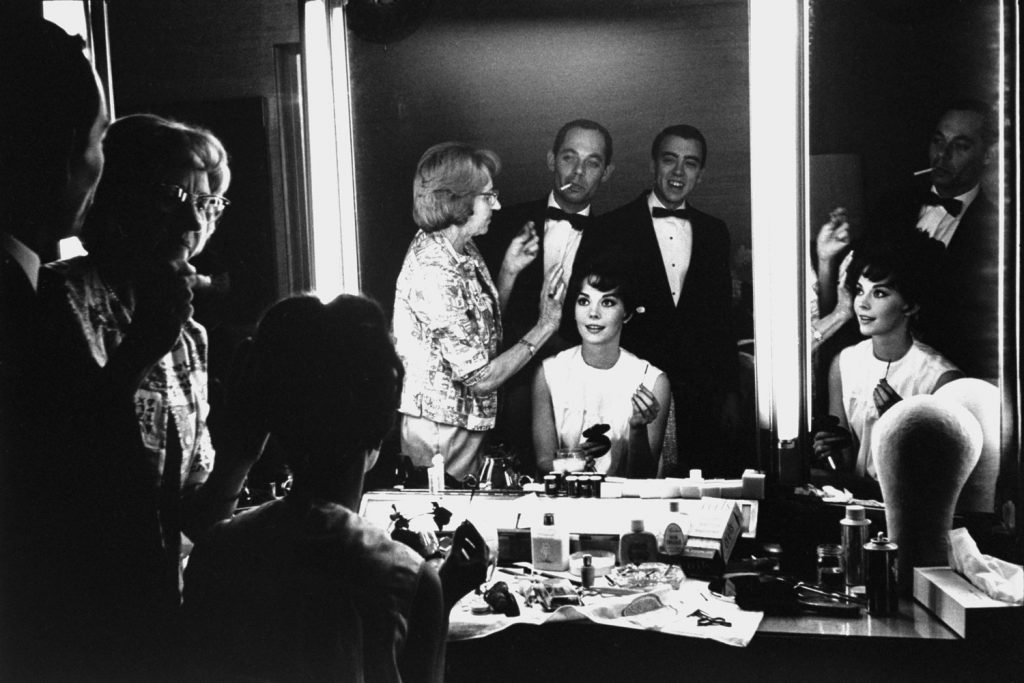 Natalie Wood, Best Actress nominee for her role as Deanie Loomis in Splendor in the Grass, had her hair done prior to the 1962 Academy Awards. 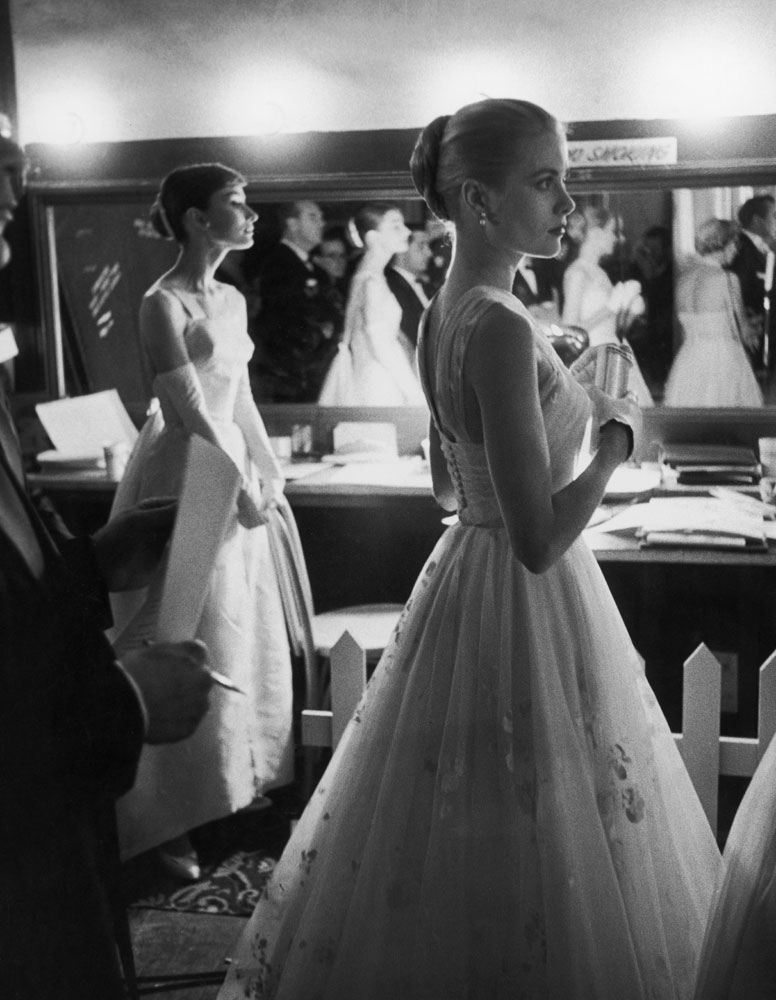 Audrey Hepburn and Grace Kelly waited backstage at the RKO Pantages Theatre during the 1956 Academy Awards. 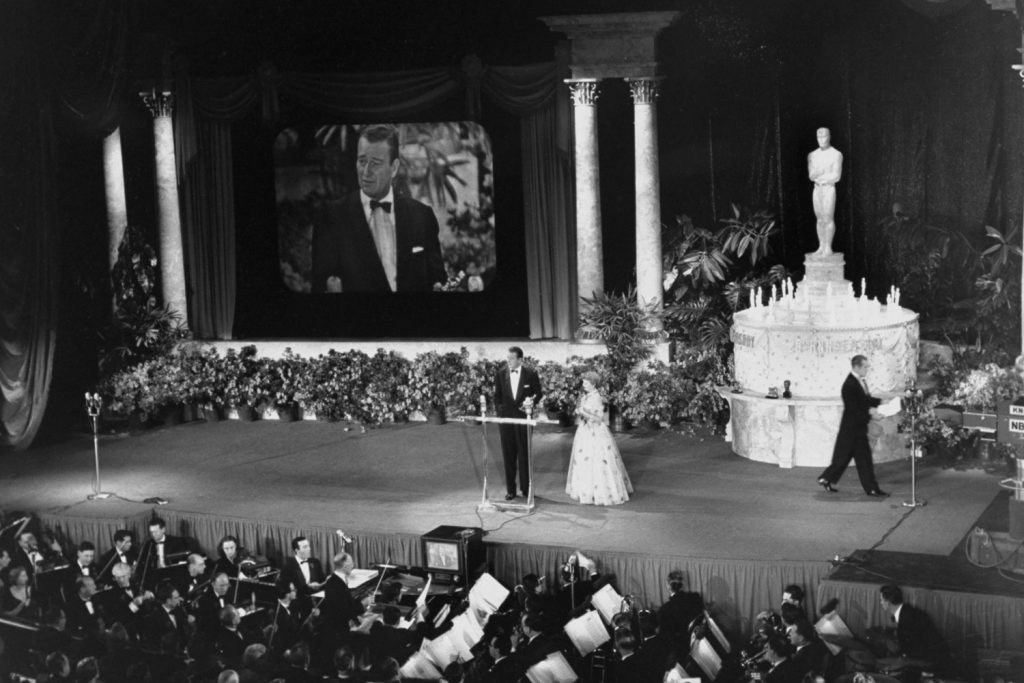 John Wayne (whose image is being projected on the huge screen) accepted the Best Director Oscar from Olivia DeHavillan for an absent John Ford during the 25th annual Academy Awards in 1953 the first year the ceremony was televised. 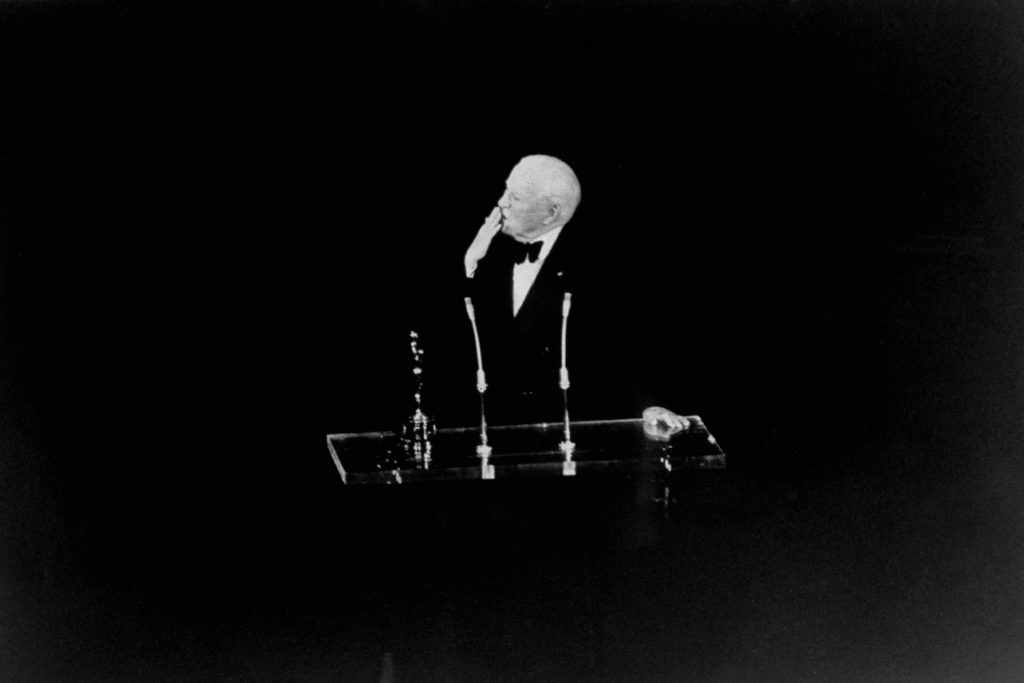 Charlie Chaplin —who had been living in self-imposed exile in Switzerland for two decades —blew a kiss to the crowd while accepting an honorary Oscar in 1972 for “the incalculable effect he has had in making motion pictures the art form of this century.” When he was introduced to the audience, Chaplin received a 12-minute standing ovation. 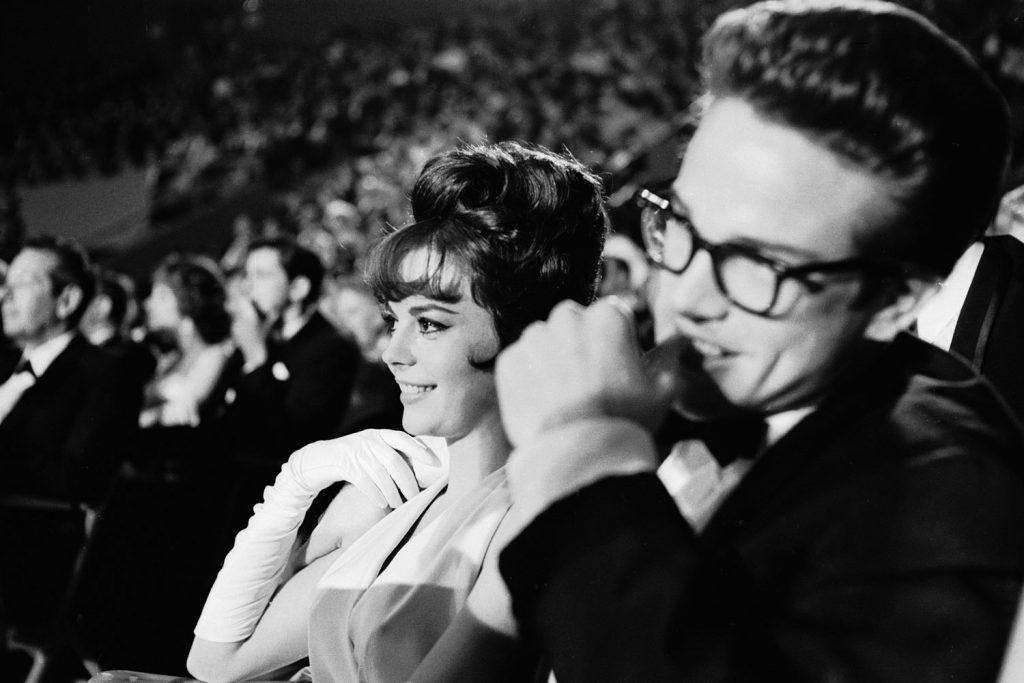 Natalie Wood and Warren Beatty, co-stars in the Elia Kazan-directed romantic drama, Splendor in the Grass, attended the 1962 Academy Awards. 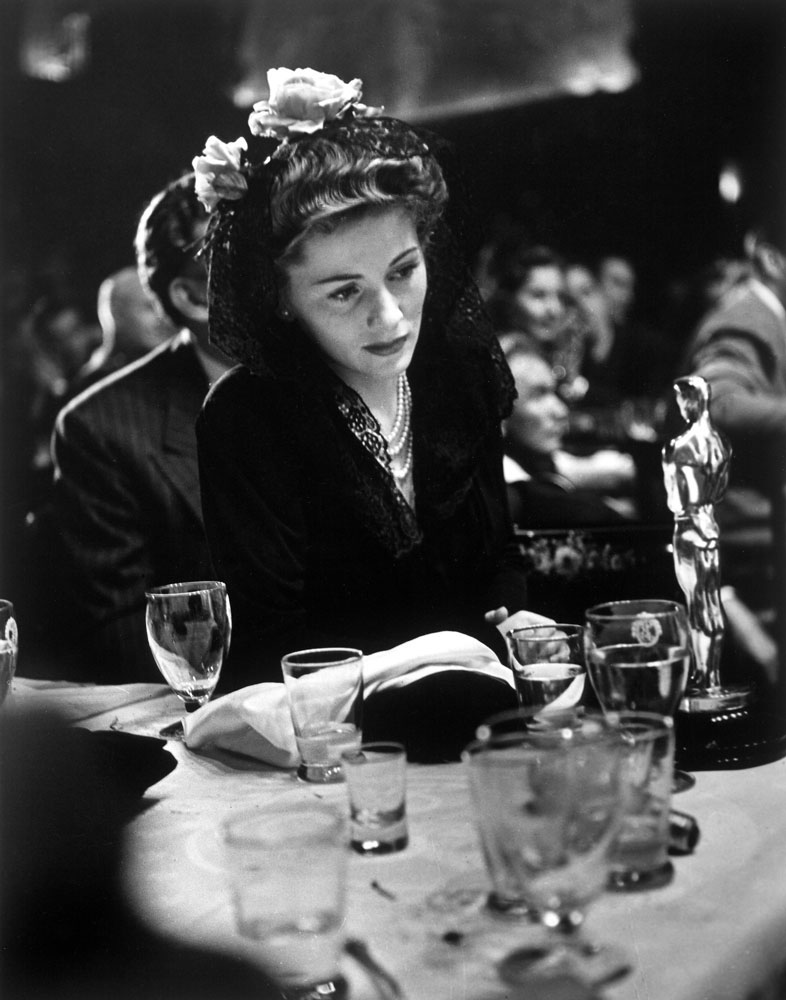 At the 1942 Academy Awards, Joan Fontaine gazed at the Best Actress Oscar she won for her role in Suspicion —an achievement that made her, incredibly, the only actor or actress to ever win an Oscar for a performance in an Alfred Hitchcock film. 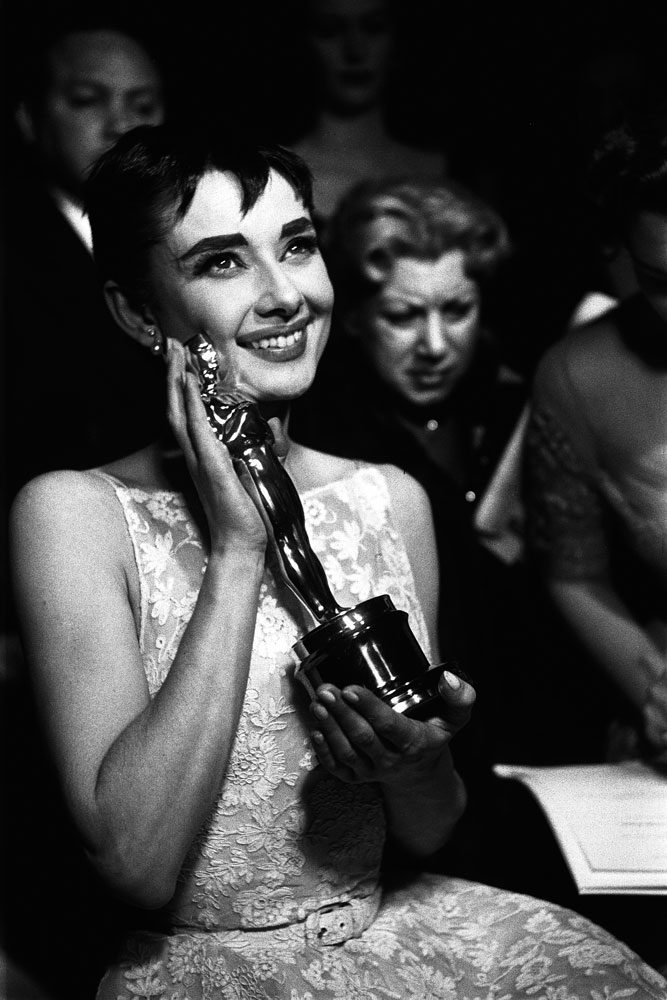 Audrey Hepburn cradled the Oscar she won for her role in Roman Holiday. 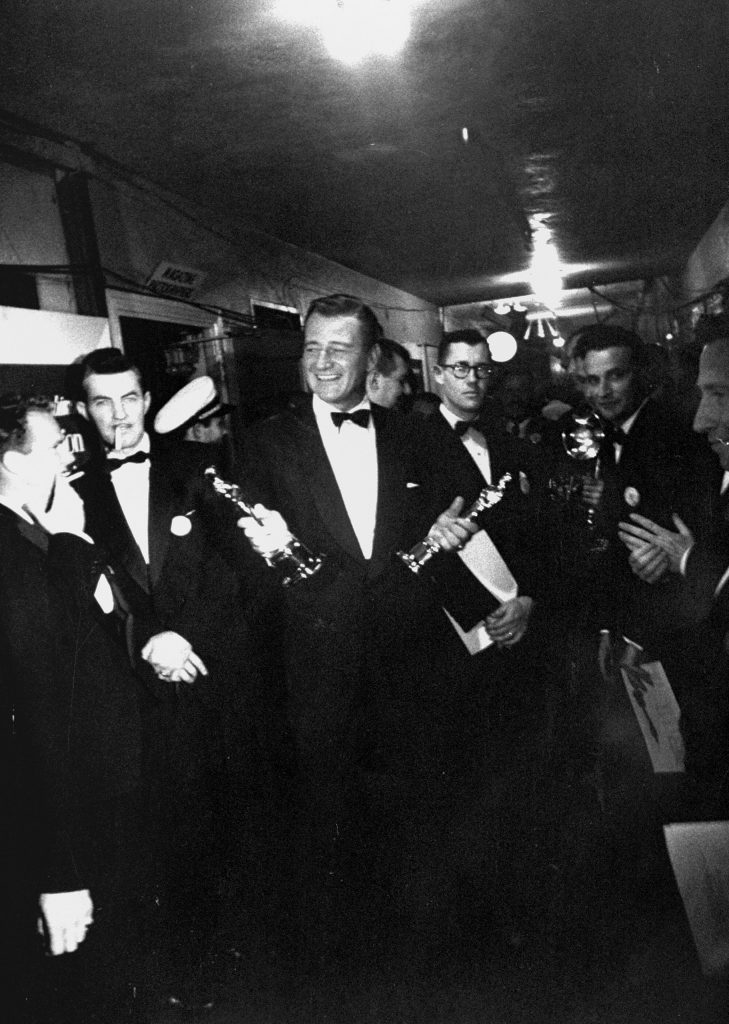 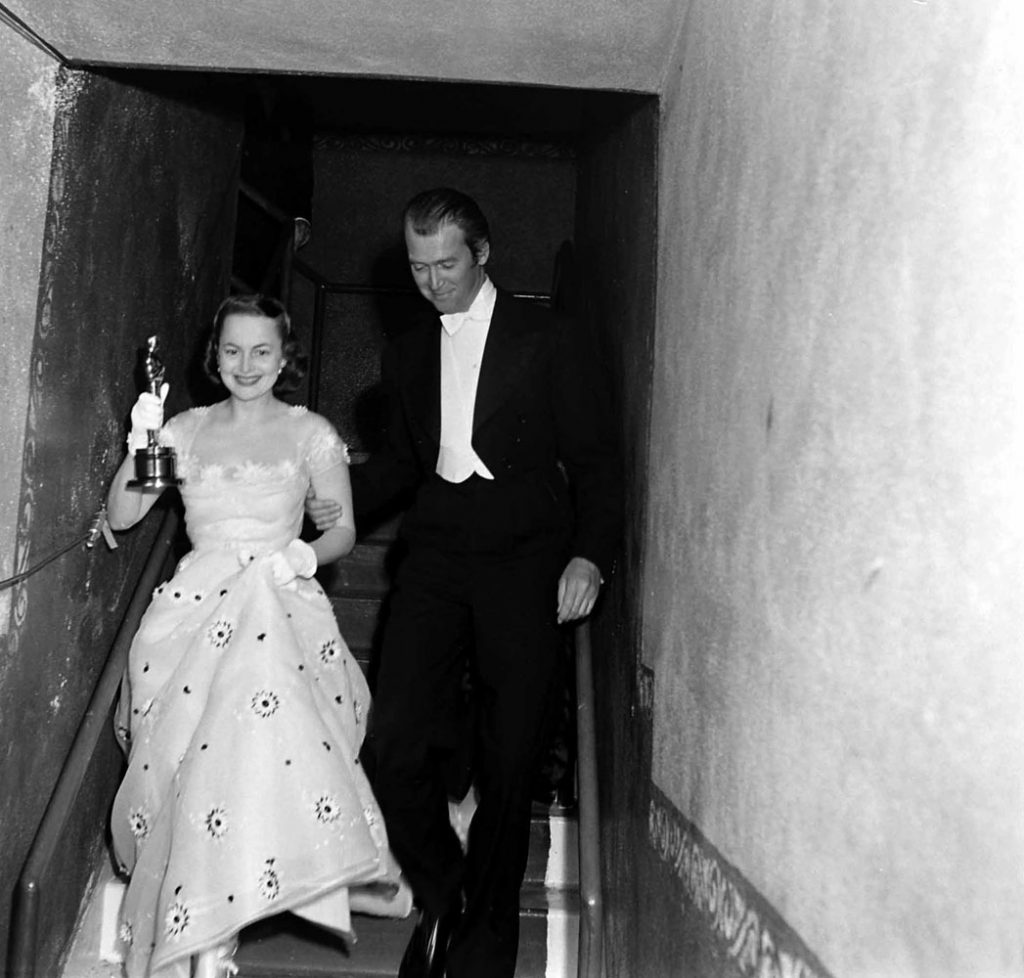 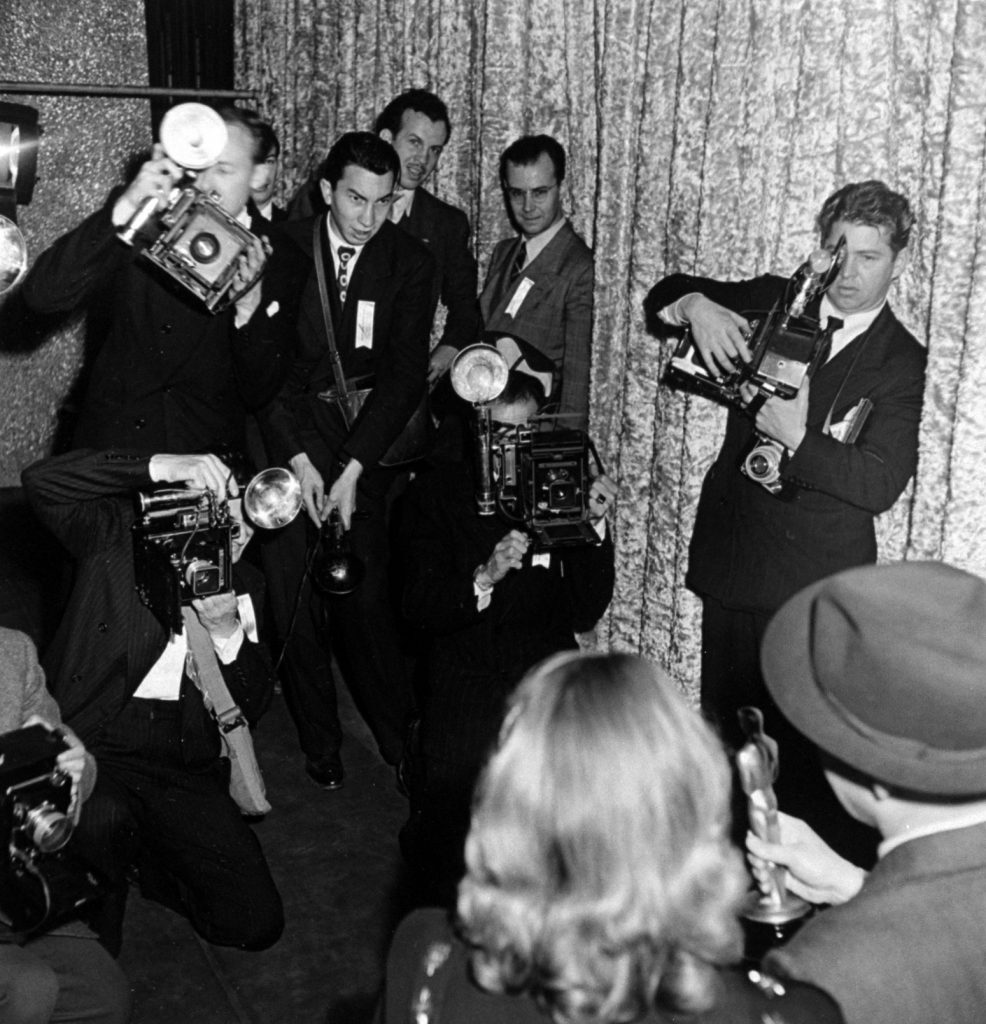 Presenters Ginger Rogers and George Murphy danced together while holding an Oscar backstage at the RKO Pantages Theatre in 1950. 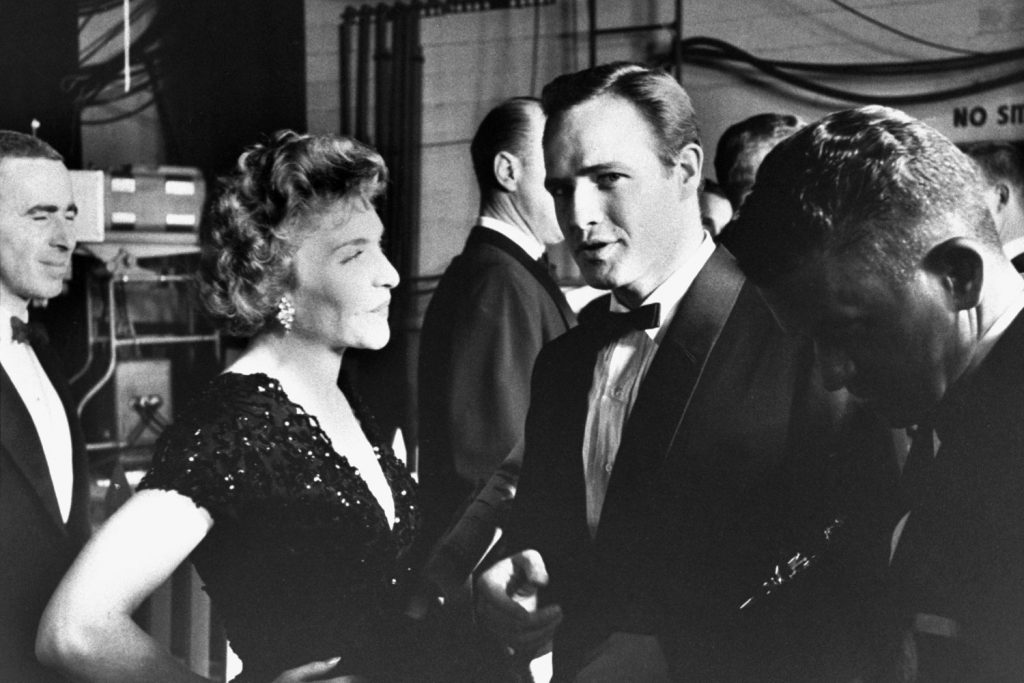 Marlon Brando (right, with French singer and actress Line Renaud) casually held his Best Actor Oscar for On The Waterfront at the 1955 Academy Awards at the RKO Pantages Theatre. 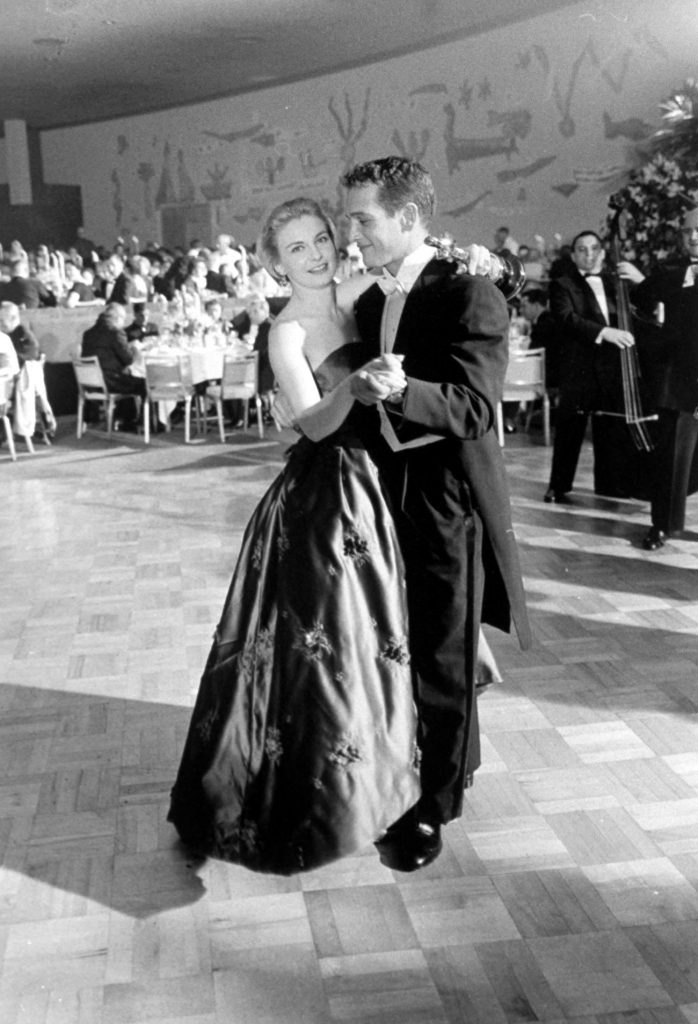 Joanne Woodward danced with her husband, Paul Newman, at the Governor’s Ball following the Academy Awards where she won the Oscar for Best Actress for her role in Three Faces of Eve. 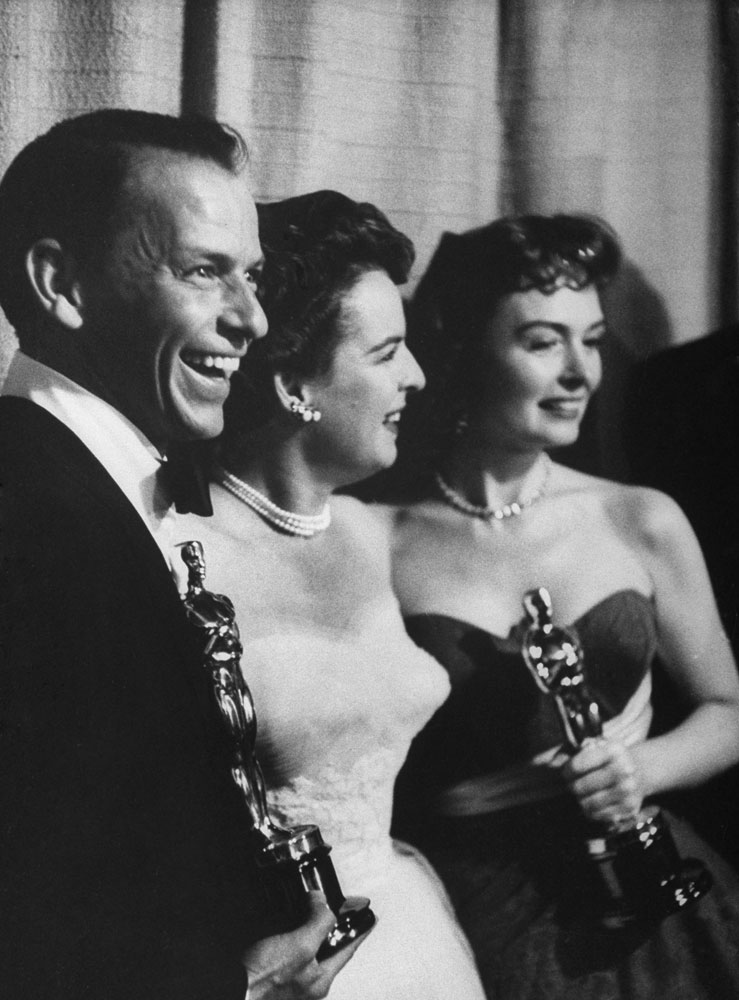 Frank Sinatra and Donna Reed held their Oscars as Best Supporting Actor and Actress in From Here to Eternity —a film that won eight statuettes in 1954, including Best Picture. 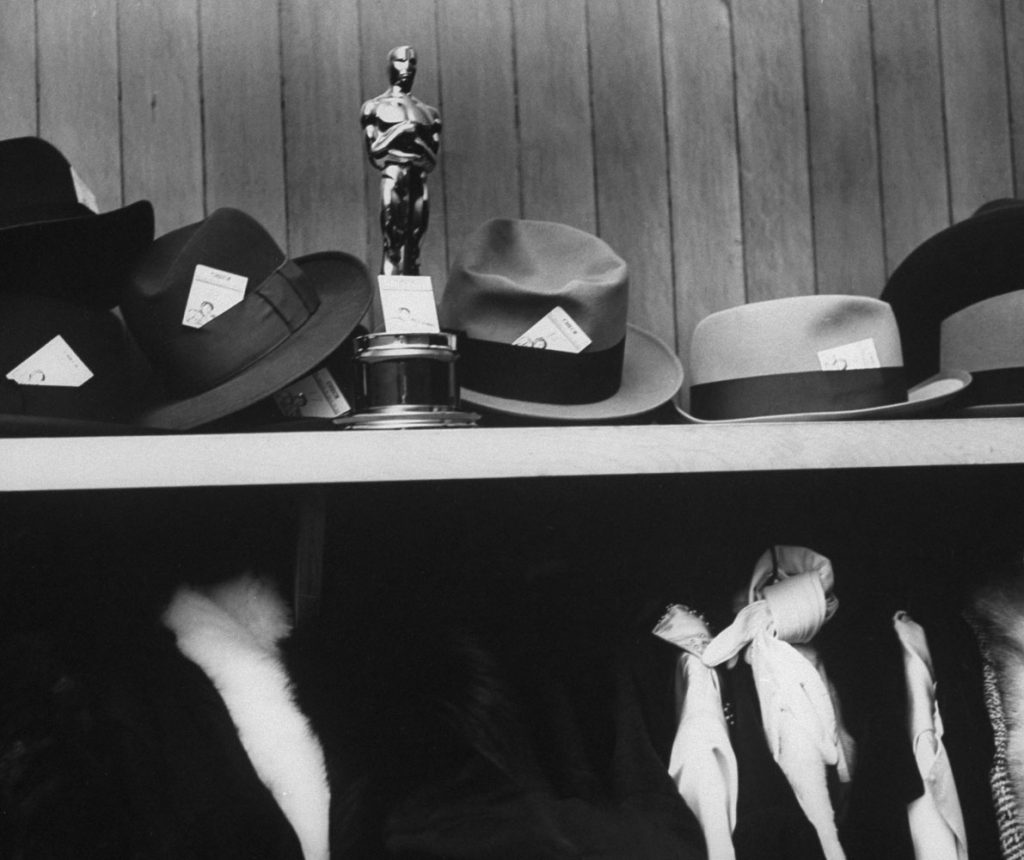 Producer Buddy Adler’s Academy Award for From Here to Eternity stood amid hats in the coat check room at Romanoff’s restaurant in Beverly Hills during an Oscars after-party in 1954.