Philip Pearlstein: A Life in Art, From Student to Master

Pearlstein's paintings "Merry-go-round" (top) and "Wylie Avenue Barber Shop" (lower right) appeared in the June 16, 1941 issue of LIFE when he was 17 years old.

The paintings that Philip Pearlstein crafted as a teenager growing up in Pittsburgh during the Depression were complex and brimming with detail—much like the ones he would do decades later as a renowned artist. Look at his paintings of the merry-go-round that he would pass on the way to a Saturday art class and of the barbershop he went to in an African-American neighborhood, and you can see that this was not work of a kid who shied away from complex imagery. 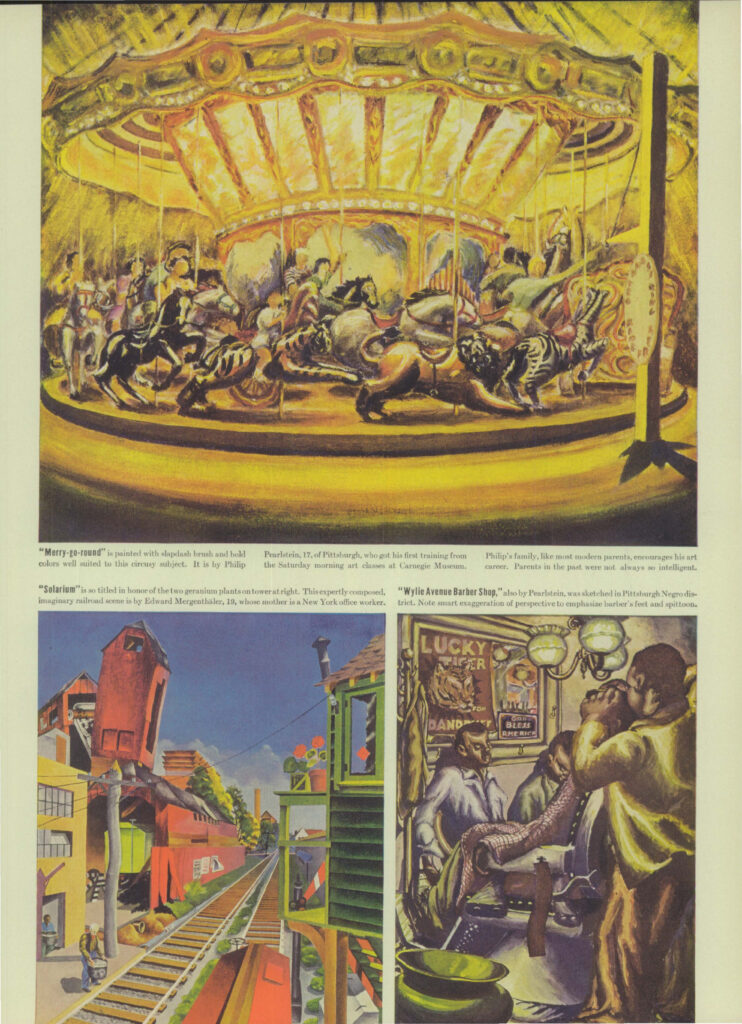 Pearlstein’s paintings “Merry-go-round” (top) and “Wylie Avenue Barber Shop” (lower right) appeared in the June 16, 1941 issue of LIFE when he was 17 years old.

You can also see how, in 1941, at age 17, his work earned prominent display on the pages of LIFE magazine, after winning first and third prizes in a competition run by Scholastic Magazine.

Pearlstein, now 96 years old, credits his high school art teacher, Joseph Fitzpatrick, for getting Pearlstein and his classmates—many of whom also went on to careers in art—so enthused. “He talked about art as one of the most important things that the human race had done, and we took it seriously,” Pearlstein says.

Appearing in LIFE at age 17 gave Pearlstein a dose of notoriety, and he says it helped him graduate high school:  “I got passing grades because I became famous for those images in LIFE magazine.”

The LIFE appearance also shaped his military career. Pearlstein brought the issue when he went for his Army intake interview after being drafted in 1943, and after four miserable months of basic training in Camp McLellan, Alabama, instead of going off to combat, he went to Camp Blanding in Florida to help work on instruction manuals. Instead of carrying a weapon, he was creating guides on how to use those weapons, while also getting an education in the fundamentals of graphic arts from the advertising industry professionals who ran the operation.

Pearlstein was eventually deployed to Italy during the end of World War II, where he was put to work creating roadsigns. In his downtime he was able to visit the city’s great museums, where his art education continued.

After the war, Pearlstein and LIFE magazine again crossed paths. He had moved from Pittsburgh to New York, where he roomed with another aspiring artist and friend from Pittsburgh, Andy Warhol. Though Warhol constantly downed the cans of tomato soup and bottles of soda that would become icons of his artwork, back then both Warhol and Pearlstein were both working in graphic design. Warhol was impressed by his roommate having been in LIFE at age 17. When Warhol asked him what it like to be famous, Pearlstein responded, “It was only for five minutes,” an exchange which presaged Warhol’s oft-repeated quote about a future in which everyone is famous for 15 minutes.

In 1957 Pearlstein, who had been working in graphics and painting on the side, took a full-time job in LIFE in part because his wife was pregnant with their first child (they would have three) and LIFE offered health benefits. His primarily responsibilities at LIFE were in page design, but one day Pearlstein overheard editors talking about needing a graphic for a story on high school drug abuse and recommended Warhol for the job. Warhol created the graphic, but the piece never ran. Pearlstein’s LIFE tenure came to an end in 1958, when he received a Fulbright scholarship and moved with his family to Italy for a year, where he painted landscapes.

Through much of the 1950s Pearlstein attempted to paint in the Abstract Expressionist style made famous by such artists as Jackson Pollock and Mark Rothko, and which was the dominant mode in the New York art world.

But after a point Pearlstein realized that wasn’t for him. He saw the abstract expressionists as people who were working through dark issues—but with his marriage, his Fulbright scholarship, living in Italy, he was a happy guy. “You have to be unhappy to be an expressionist,” he says. “I didn’t want to fake it.”

After coming back from Italy he turned to teaching, first at the Pratt Institute and later at Brooklyn College, and he began to gain recognition for the realistic nude portraits that would become his defining works. In 1966 he crossed paths with LIFE magazine again when John Loengard photographed Pearlstein at work in his studio for a story (which never ran) on modern figure painting. 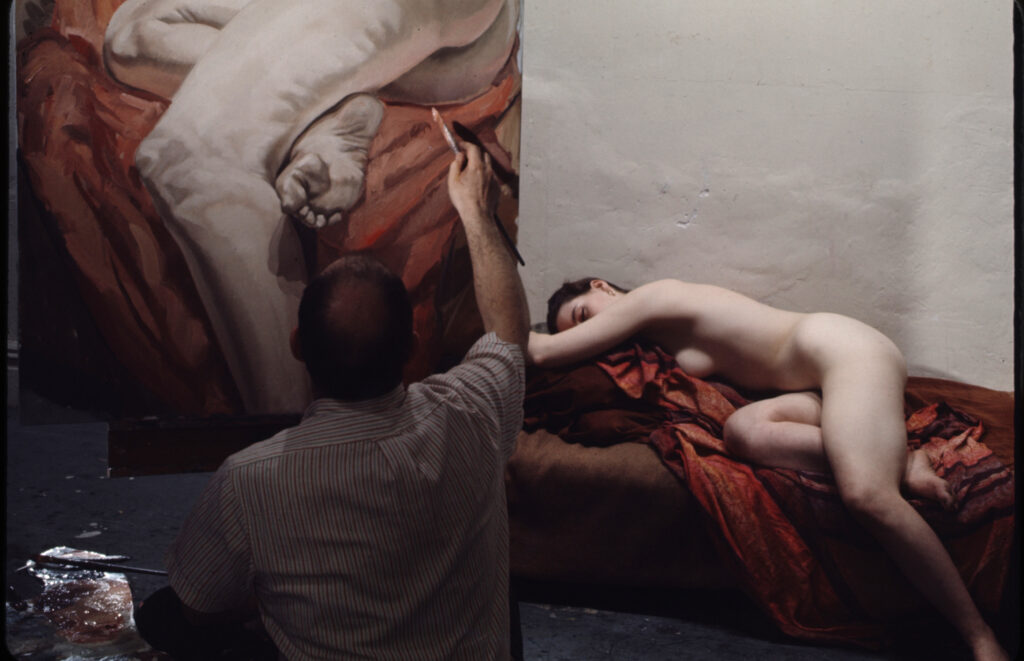 Philip Pearlstein painted one of the nude portraits for which he became famous, 1966.

Pearlstein describes his paintings as being driven primary by the balancing of graphic elements. Even in most of his figure drawings, the background will have plenty to draw the eye, whether it be a cityscape seen out of a window, a richly detailed rug on the floor, or random objects such as a blow-up dinosaur or a carousel lion. In a writeup of a Pearlstein career retrospective at the Montclair Art Museum titled “Objectifications,” the New York Times wrote about one such painting, titled Two Models With Four Whirly-Gigs, and how the interplay between the models an objects “yields a gripping optical complexity.”

That retrospective took place twelve years ago, in 2008, but even today Pearlstein is still at it. When interviewed, he was on vacation with family for a week in Wellfleet, Mass., and he brought his brushes with him, painting watercolors of the wooded scene outside his house.

Even at 96, Pearlstein speaks with a vitality and clarity that would be the envy those years younger. Asked how he was able to stay so sharp, his answer was simple: “I never stopped painting.” 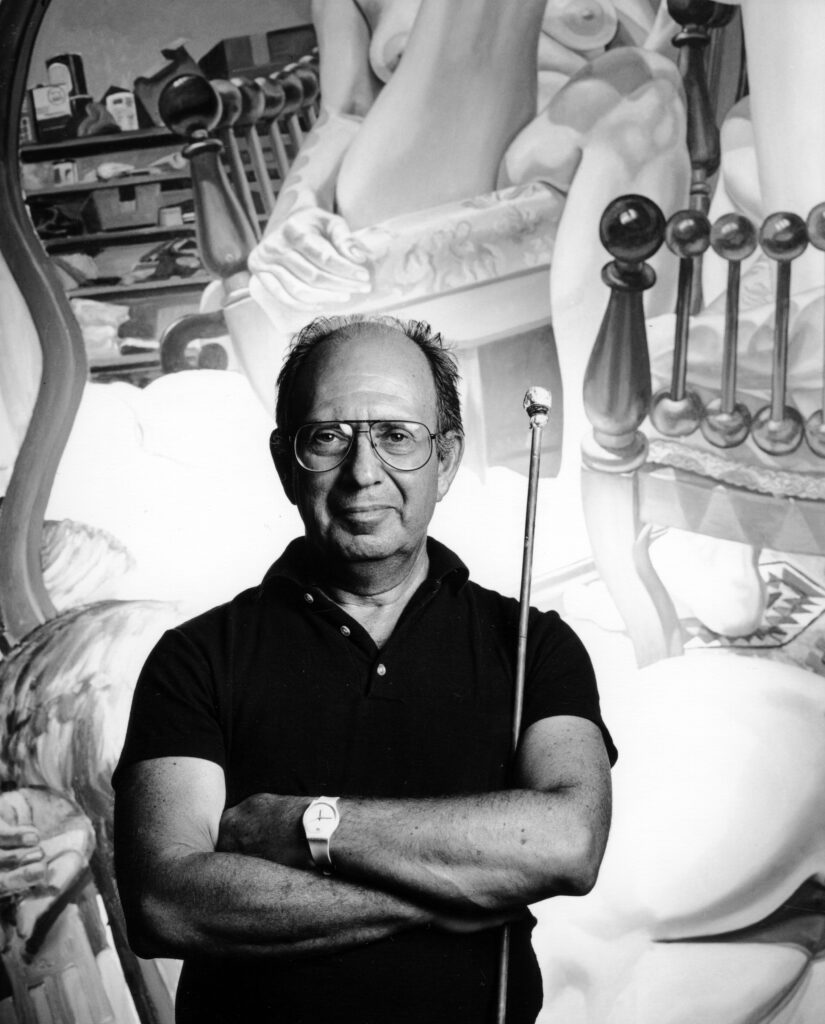