Ian McKellan portrayed Galdalf during the filming of The Lord of the RIngs: The Two Towers.

The following is from the introduction to LIFE’s new special issue The Lord of the Rings: The Origins, the Stories, the Extraordinary Adventure, available at newsstands and here, online:

“Fantasy has a history of misfires,” filmmaker Peter Jackson told Entertainment Weekly in 2001, just weeks before the release of his first movie based on The Lord of the Rings, J.R.R. Tolkien’s literary landmark. “For every other genre—Westerns, war—you can name truly amazing films. So fantasy is interesting, because there aren’t really any clichés. It’s [a chance] to give an audience an original experience.”

Back in 1937, that’s precisely what the fledgling novelist and distinguished Oxford professor had done with The Hobbit. His debut, set in his imagined world of Middle-earth, drew on a long-­running fascination with fairy tales and Norse myth, creating a high-­fantasy world unlike anything ever previously committed to paper. The tale of a resolute homebody, hobbit Bilbo Baggins, drawn into a quest—­involving wizards, dwarves, elves, giant spiders, a fire-breathing dragon, a hoard of gold, and a massive conflict among five armies—immediately captured the public’s imagination and vaulted the novel to best-seller status.

Tolkien then spent 17 years crafting the sequel, and it proved worth the wait. Spanning more than 1,100 pages over three volumes, The Lord of the Rings told a far more complicated story, dense with mythology and invented languages, and made for a dazzling read. Even if it perplexed certain critics, it gained an immediate foothold with a generation of readers and forever changed the cultural landscape.

“His work reflected the potential of fantasy as a genre, and its influence extended beyond fantasy as well,” says Tolkien scholar Amy H. Sturgis, an author and professor at Lenoir-Rhyne University in North Carolina. “His stories spawned many imitators, but they also continue to inspire creators who seek to tell different tales from other perspectives. Just think of modern mythologies like Star Trek or Star Wars; they use detailed maps and created languages and invented histories for imaginary cultures in order to build immersive worlds and galaxies. They invite audiences to inhabit these fictional landscapes and explore the human condition through their hopeful morality tales. That’s Tolkienian storytelling.”

The Lord of the Rings novels found an especially receptive audience among the American counterculture, becoming fixtures on university bookshelves across the country, which grew their popularity and influence. “The hobbit habit seems to be almost as catching as LSD,” proclaimed Time magazine in 1966. “On many U.S. campuses, buttons declaring FRODO LIVES and GO GO GANDALF—frequently written in Elvish script—are almost as common as football letters.”

Among those Me Generation fans was future author Stephen King, who has cited The Lord of the Rings as one of his 10 favorite novels. “Hobbits were big when I was nineteen,” King writes in the introduction to one of the books in his Tolkien-inspired Dark Tower series. “There were probably half a dozen Merrys and Pippins slogging through the mud at Max Yasgur’s farm during the Great Woodstock Music Festival, twice as many Frodos, and hippie Gandalfs without number,” he continued, naming popular characters from the saga.

In the decades since, The Lord of the Rings has served as a gateway for readers to discover the joys of adventure stories set in worlds far beyond their own. It has inspired authors to explore the furthest reaches of their imaginations and conjure countless stories that are equally beloved. “Of all the authors [that] had an impact on me . . . Tolkien is right up there at the top,” said George R.R. Martin, whose novels spawned the blockbuster TV series Game of Thrones, in 2019. “I yield to no one in my admiration for The Lord of the Rings—I ­re-read it every few years. It’s one of the great books of the 20th century . . .”

Of Tolkien’s many famous fans, however, few may understand and treasure his work more deeply than comedian and late-night talk show host Stephen Colbert, who can even read Tolkien’s invented Elvish language. “Tolkien’s work has been a lifelong haven for me—truly a light in dark places when all other lights went out,” Colbert wrote in EW in 2014. “For an awkward teenager, Middle-earth was a world I could escape to.”

Filmmaker Peter Jackson read The Lord of the Rings in his later teen years, not realizing he’d someday return Tolkien’s epic to the forefront of popular culture. Released between 2001 and 2003, Jackson’s cinematic Rings trilogy dominated the worldwide box office, earning billions and racking up countless critical accolades. No longer just the domain of fantasy devotees, the story of heroic Frodo Baggins and his quest to destroy the Ring of Power became inescapable—though some longtime Tolkien experts were less enamored with the movies than general audiences.

“Ever since the Jackson adaptations were released there have been fans who confuse what Tolkien wrote with what Jackson filmed,” say Tolkien scholars Wayne Hammond and Christina Scull in an e-mail to LIFE. “Jackson did well from his films, but they sharply [and] sometimes angrily divided Tolkien enthusiasts, some of whom praise them highly and accept their many departures from their source, while others—such as ourselves—­find them seriously flawed.”

Subsequent attempts at adaptation have fared less well than Jackson’s Rings juggernaut. Theater producer Kevin Wallace raised about $25 million to mount a three-and-a-half-hour Lord of the Rings musical onstage in Toronto, in 2006. Unfortunately, according to the Guardian, the production was “an unmitigated disaster.” A retooled, trimmed-down version premiered on London’s West End in 2007 but unceremoniously closed the following year.

If anything, the musical’s woes speak to how challenging it can be to get Tolkien right. Jackson struggled with his follow-up adaptation of The Hobbit, which he also made into a trilogy. Although the films once again found commercial success, they didn’t catch fire in quite the same way his Rings trilogy had—by that point, Game of Thrones had become a sensation in its own right, offering fans a more mature take on the fantasy genre. (Jackson also stated that behind-the-scenes turmoil on the productions left him with less time to prepare than he might have liked.)

There are yet more Tolkien projects ahead. Amazon announced a Lord of the Rings series, due to arrive in 2022. Set during Middle-earth’s Second Age, the TV show will take place thousands of years prior to the period of Jackson’s movies. Early reports indicate that the first season will consist of 20 episodes, all shot in New Zealand, on a staggering $465 million budget.

Future adaptations will certainly come and go, but regardless of their success or failure, Tolkien’s writings will endure. Even though his stories were conceived long ago and unfold in a landscape different from our own, the crises the characters face and the work’s underlying themes remain imminently relatable and relevant.

“We live in a complicated world with multiple, simultaneous crises unfolding,” says Sturgis. “It is easy to feel not only stressed but also helpless and hopeless. . . . Tolkien reminds us that the smallest and most humble can be heroes; there is a part everyone can play in fighting the darkness and making the world better. Most importantly, Tolkien acknowledges that even in the direst of times, we have reason to hope. Our need for consolation, inspiration, and hope is evergreen.”

Here are photos from LIFE’s new special issue The Lord of the Rings: The Origins, the Stories, the Extraordinary Adventure. 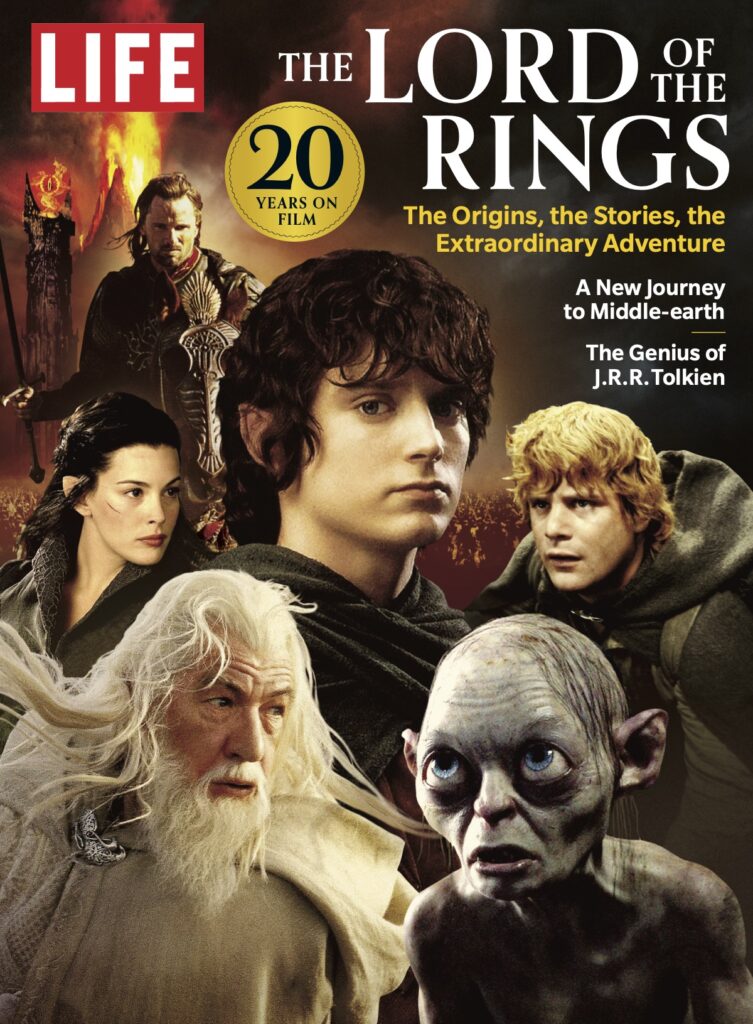 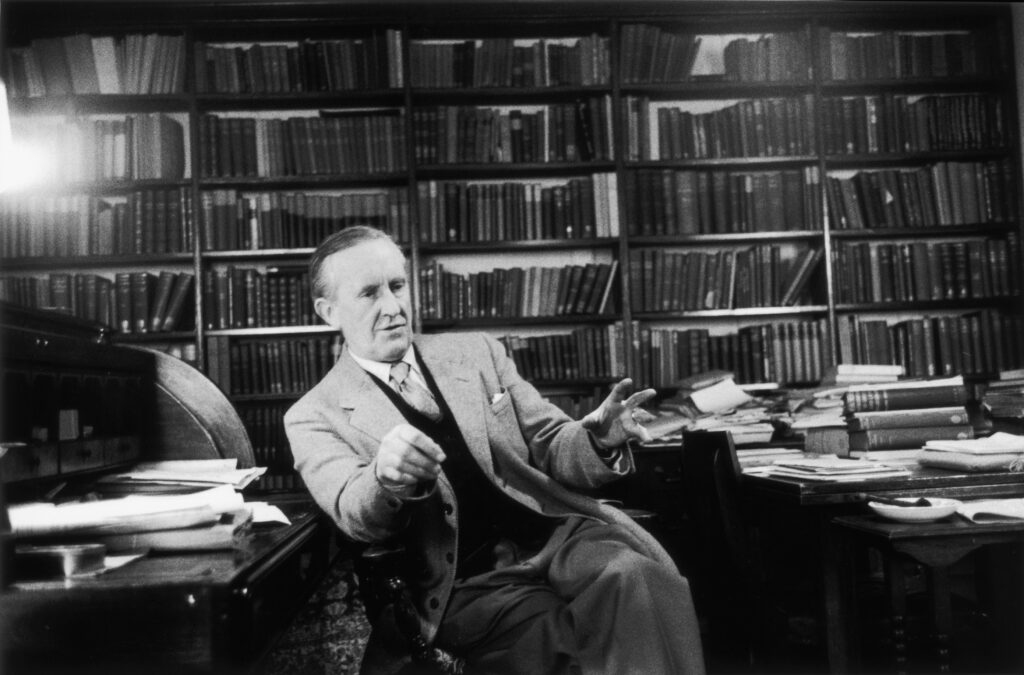 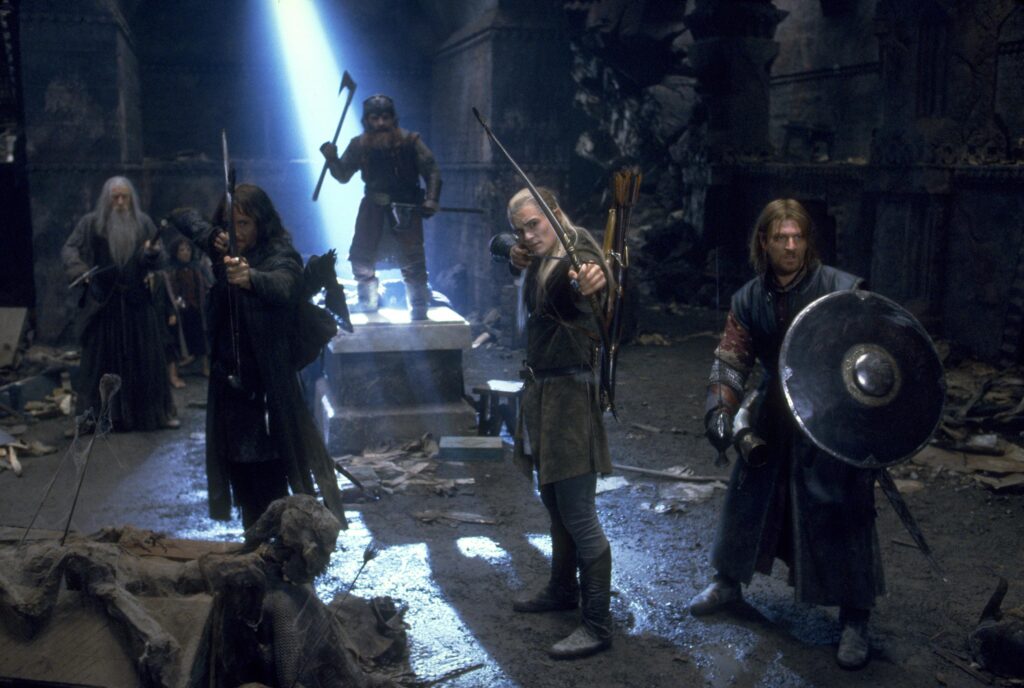 In The Lord of the Rings: Fellowship of the Ring, those forming an alliance to wage war against evil included Aragorn (Viggo Mortensen), Legolas (Orlando Bloom) and Boromir (Sean Bean) and, in the background, Gandalf (Ian McKellan) and Gimli (John Rhys-Davis).

Sam (Sean Astin) had little trust for Gollum in Lord of the Rings: The Two Towers. 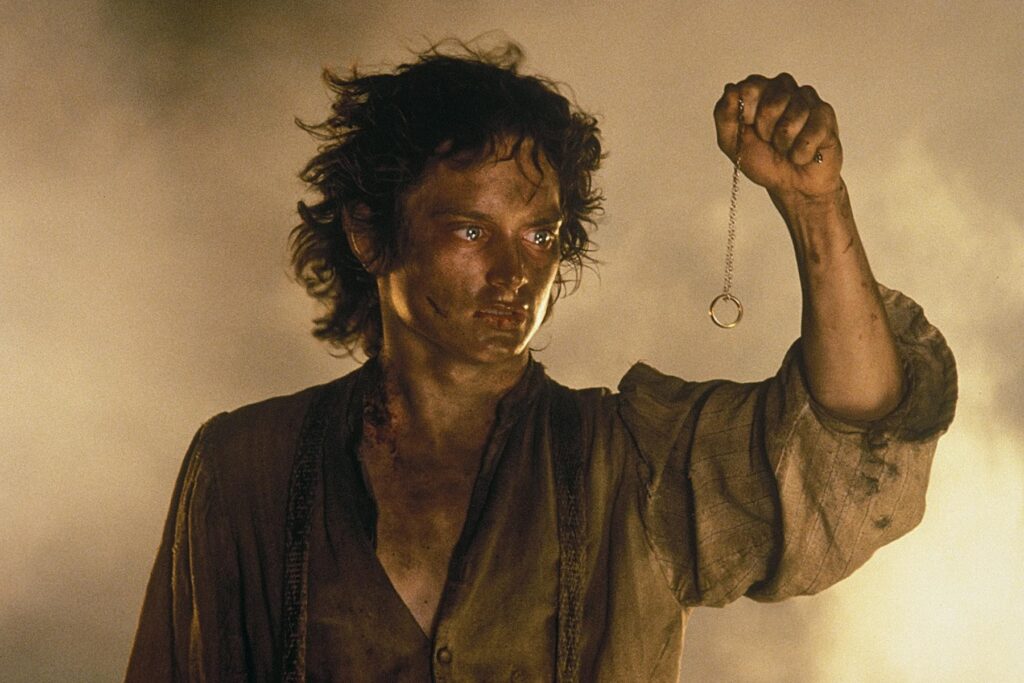 Frodo (Elijah Wood) beheld the enchanting ring in The Lord of the Rings: Return of the King. 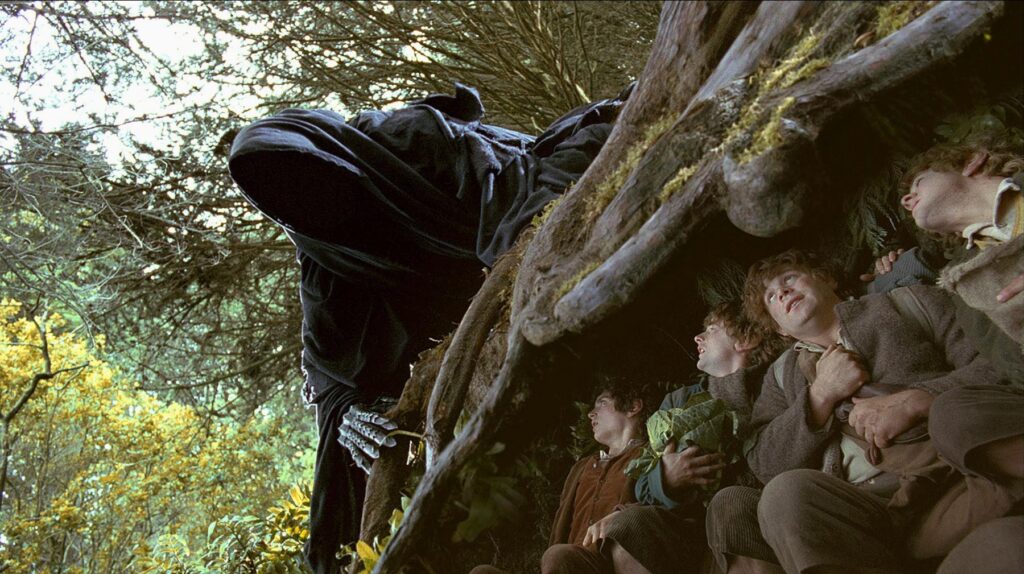 A rightwraith tracked Frodo (Elijah Wood), Sam (Sean Astin) Pippin (Billy Boyd) and Merry (Dominic Monaghan) early on their journey in The Lord of the Rings: Fellowship of the Ring. 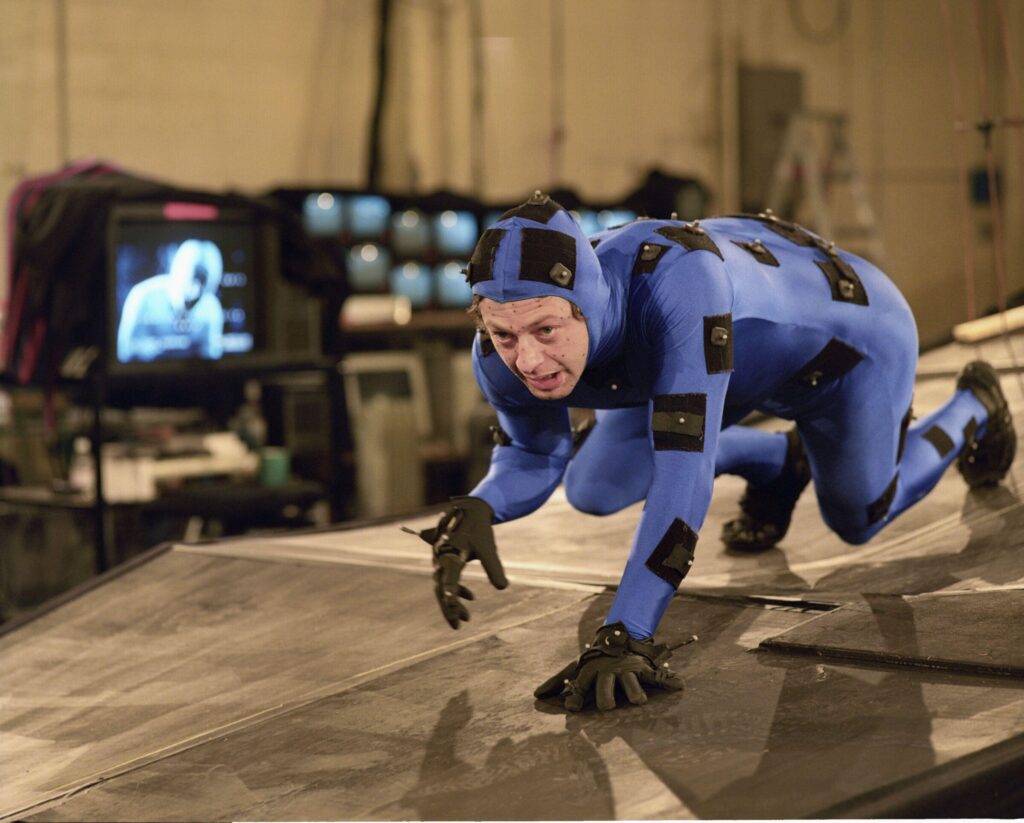 Andy Serkis, with the help of special effects.,played the role of Gollum in The Lord of the Rings movies. 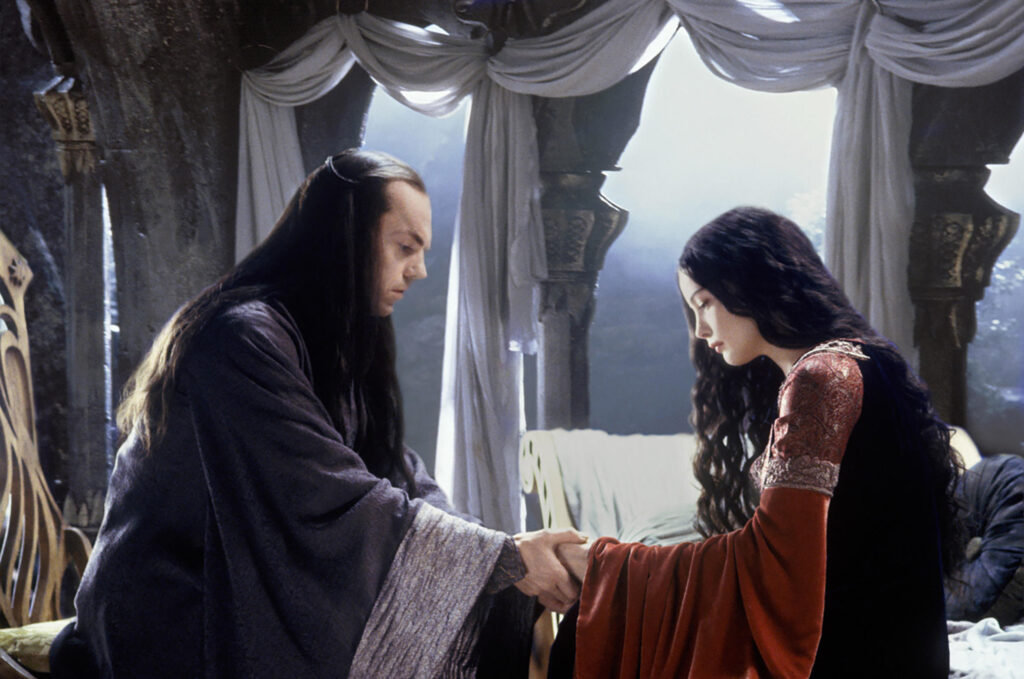 Elrond (Hugo Weaving) and Arwen (Liv Tyler) in The Lord of the Rings: Return of the King. 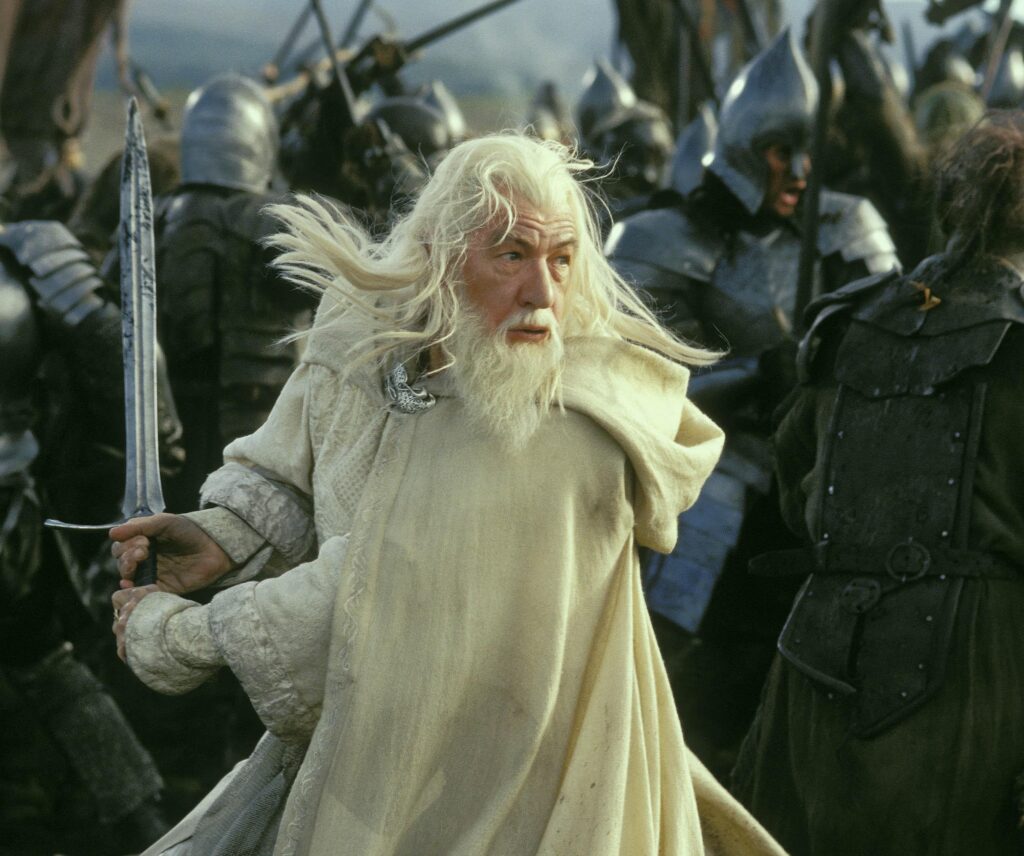 Gandalf (Ian McKellan) took up arms in one of the brilliantly staged battle scenes in The Lord of the Rings: Return of the King. 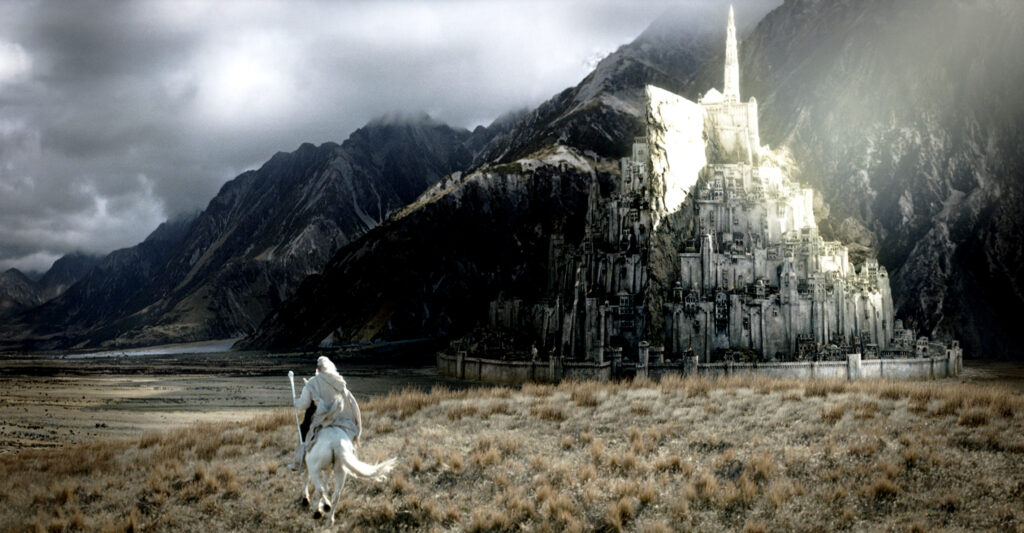 Gandalf (Ian McKellan) in The Lord of the Rings: The Return of the King. 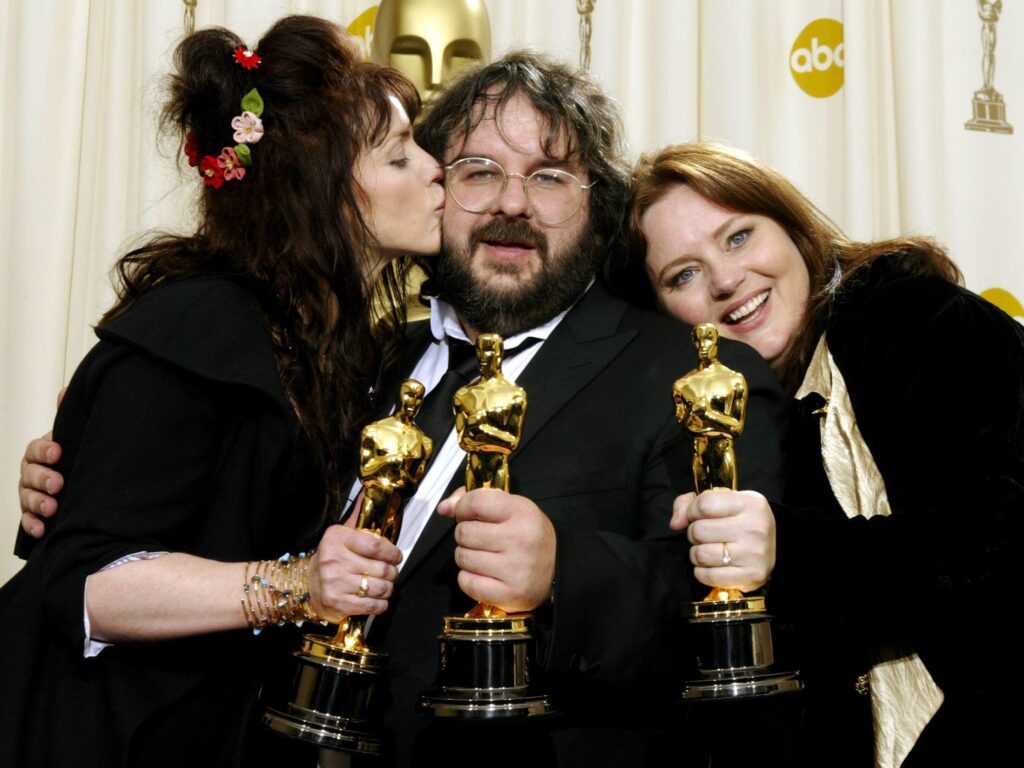 Director Peter Jackson (center) was flanked by screenwriters Fran Walsh (left) and Philippa Boyens after they won the Academy Award for best adapted screenplay for The Lord of the Rings: The Return of the King, February 29, 2004.