The Sopranos: The Show That Changed Television

Tony, Carmela and A.J. awaited the arrival of Meadow in the closing scene of the Sopranos series finale, which aired June 10, 2007.

The following is adapted from the introduction to LIFE’s new special issue The Sopranos: The Show That Changed Everything, available at newsstands and online:

Fourteen years after The Sopranos ended its six-season run with a famously abrupt blackout—and eight years after its indelible star, James Gandolfini, died of an infinitely more tragic heart attack—HBO’s transformational mob family masterpiece lives on. In part, of course, we can thank internet streaming services that guarantee video immortality—but it’s also because creator David Chase injected the series into our cultural bloodstream. As countless critics have noted, the richly textured, complex work—centered as it was on a nuanced antihero—redefined high-quality television. Pushing creative and moral boundaries along with audience expectations, it influenced a raft of prestige TV that followed in its wake—including Mad Men, Breaking Bad, The Wire, Deadwood, and Game of Thrones (some of which involved writers and directors who worked on The Sopranos). And the series is now ingrained in the lexicon. It has largely supplanted The Godfather as the go-to mafia reference; Donald Trump’s brazenly transactional tenure in the White House earned him plenty of unfavorable comparisons to Tony Soprano. A book by Deborrah Himsel, Leadership Sopranos Style: How to Become a More Effective Boss, holds up the fictional New Jersey mob boss as a model manager, if you overlook a few cold-blooded murders.

Now The Sopranos gained a whole new kind of currency with the release in October 2021 of a prequel movie, The Many Saints of Newark, starring James’s son, Michael Gandolfini, as a young Tony coming of age in the titular city during the racially charged summer of 1967. Written by Chase and Lawrence Konner and directed by Alan Taylor, the film explores the social and familial forces that helped shape a sensitive, impressionable youth into the angst-ridden mobster who riveted audiences from 1999 to 2007.

And what was it, exactly, that made The Sopranos can’t-miss TV during those years? For one thing, it was unlike anything that came before. “Pre-Sopranos TV was widely dismissed as a medium for programs that didn’t ask the viewer to think about anything except what was coming on next, and preferred lovable characters who didn’t change and had no inner life,” write critics Matt Zoller Seitz of New York magazine and Alan Sepinwall of Rolling Stone—both of whom covered the show for the Newark Star-Ledger—in their 2019 book, The Sopranos Sessions. The networks imposed rigid standards and rules when it came to language, story lines, sex, violence, race, and other content—controversial subject matter was anathema, and nobody wanted to rock the boat, or, heaven forbid, alienate the sponsors.

The Sopranos said goodbye to all that. Granted, it wasn’t the first series to push the envelope. There was All in the Family, with its humanized bigot, Archie Bunker; the morally complex Hill Street Blues; and other unconventional fare, such as Twin Peaks and the prison series Oz. But as Seitz and Sepinwall point out, The Sopranos was the first show to break all the rules “and still become a massive, enduring hit”—one widely used as a template. Many of the series’ most innovative features have become routine conventions of the small screen—antiheroic or even downright villainous central characters, serialized narrative arcs instead of discrete episodes, and the recognition that in real life there are moral gray areas and unresolved plots.

For the uninitiated—those who aren’t “made” viewers, so to speak—Chase’s saga follows Tony Soprano, the bearish boss of North Jersey’s DiMeo crime family and patriarch of his own upper-middle-class household, and how he balances (or doesn’t) an often-violent “professional” life with the dynamics of his family. That would be Tony’s long-suffering, compartmentalizing wife, Carmela (Oz alum Edie Falco), and two adolescent kids—Ivy League–bound daughter Meadow (Jamie-Lynn Sigler) and perpetually confused son Anthony Jr. (Robert Iler). Also in the mix are Tony’s raging sister Janice (Aida Turturro) and troublesome elders—nightmarish mother Livia (Nancy Marchand) and Corrado “Junior” Soprano (Dominic Chianese), Tony’s shrewd and suspicious mafioso uncle. These characters interweave with Tony’s criminal crew, including his hotheaded “nephew” Christopher (Michael Imperioli) and guys with names like Paulie Walnuts, Big Pussy and Bobby “Bacala” Baccalieri, as well as enemy mobsters, FBI agents, and Tony’s tag team of high-maintenance mistresses. Under constant stress from all of these and tormented by demons from his childhood, Tony has panic attacks and lands in psychotherapy, under the care of Dr. Jennifer Melfi (Lorraine Bracco).

That’s the general outline, but The Sopranos is so much more—it contains multitudes. Times of London critic Ben McIntyre told the BBC in 2007 that the series “covered all the great elements of drama like Shakespeare—Tony Soprano really is King Lear. The show’s themes are the great themes of literature.” The Sopranos, McIntyre noted, depicted “fathers fighting sons, kings controlling kingdoms, treachery, loyalty, love, guilt, revenge… everything, really,” adding that it was about “a bad man with good in him, trying to understand how he works.” McIntyre didn’t stop there. He also compared The Sopranos to the works of Charles Dickens, likening the show to a “huge, sprawling novel” with “small cameo parts that pull you along through it.”

Indeed, almost all the show’s characters are fleshed out. Tony as boss is by turns monstrous and murderous, reasonable and pragmatic; off the job, we see him engaged in feverish extramarital sex, then having a tender heart-to-heart with his wife or kids, or baring his childhood pain to his shrink. Almost everyone else also comes off as a multidimensional human, even those who make brief appearances—a psychopathic capo here, a crooked cop there. Though graphically violent on occasion, with many moments of high drama, The Sopranos has also been described—by Gandolfini, among others—as essentially a dark comedy. The scripts are generously leavened with humor high, low, broad, and subtle. The characters bicker and banter, sometimes over Seinfeldian minutiae; there’s irony and incongruity, mangled literary references, and mobster malapropisms. Even some of the more gruesome moments—Christopher crossing himself while disposing of a dismembered mobster’s head, for example—are so over-the-top you may be provoked to laugh.

The years since The Sopranos finale have brought heightened awareness when it comes to issues of race and gender. And the series has drawn understandable criticism. As The Many Saints of Newark explores, Tony and his pals spent their formative years in the racially incendiary crucible of Newark, and their exodus to the suburbs was part of the great “white flight” from the city. The mobsters’ racism is often on display as they fling casual slurs or try to pin their crimes on African Americans.

Meanwhile, Italian American groups have criticized The Sopranos for promoting ethnic stereotypes. “So you hear The Sopranos is a quality show, you turn it on to check it out, and it’s the same old thing again—Italian Americans stealing, hitting, shooting, cheating, killing,” Nicolas Addeo, chairman of a group called Speranza, which advocated for positive ethnic, religious, and racial representations on-screen, told the Star-Ledger in 1999. “This show is not meant to represent the Italian American experience,” Imperioli countered to the same paper. “It’s about a specific group of people, a specific time and place.”

Certainly, women have their travails in The Sopranos, operating in an old-world patriarchal subculture. Over the course of the series, female characters are used, abused, deceived, and savagely murdered. There are some fierce, assertive (and, at times, manipulative) women, though even the most impressive, Dr. Melfi, is brutally raped. But The Sopranos remains popular among women viewers. “The Sopranos was a work of art that understood the messy, unlikable truth of women in this insular world,” writes Vice critic Christina Newland. “That truth is rarely, if ever, empowering. But even at their most self-defeating or amoral, these women are allowed to be many paradoxical things. Their characterizations and the depth of writing allows them to be both maternal and fearsome, bafflingly remote yet empathetic.”

In any event, a whole new crop of viewers has generated Sopranos buzz. According to WarnerMedia, HBO’s parent company, the show’s popularity skyrocketed in 2020 during the pandemic. Noted Sepinwall to GQ at the time: “A lot of people [are] using the quarantine as an opportunity to finally watch or rewatch different shows they’ve had on their list for a while. But this is definitely one of the high ones, just because of its importance in TV and pop cultural history.”

And while millennial and Gen Z audiences may be watching The Sopranos for the first time in 2021, Sepinwall says they’re reacting to the series much as he did as a critic more than two decades ago: “They’re actually saying, ‘This is still one of the greatest—if not the greatest—shows ever made.’”

Here are selected images from LIFE’s new special issue The Sopranos: The Show That Changed Everything. Available here 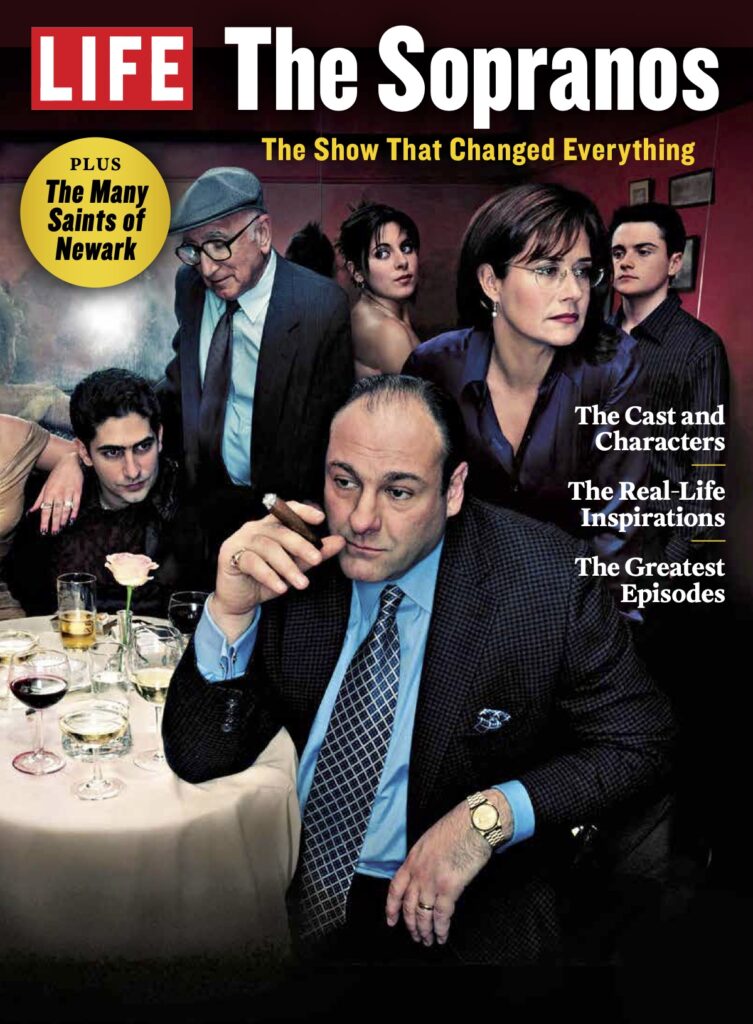 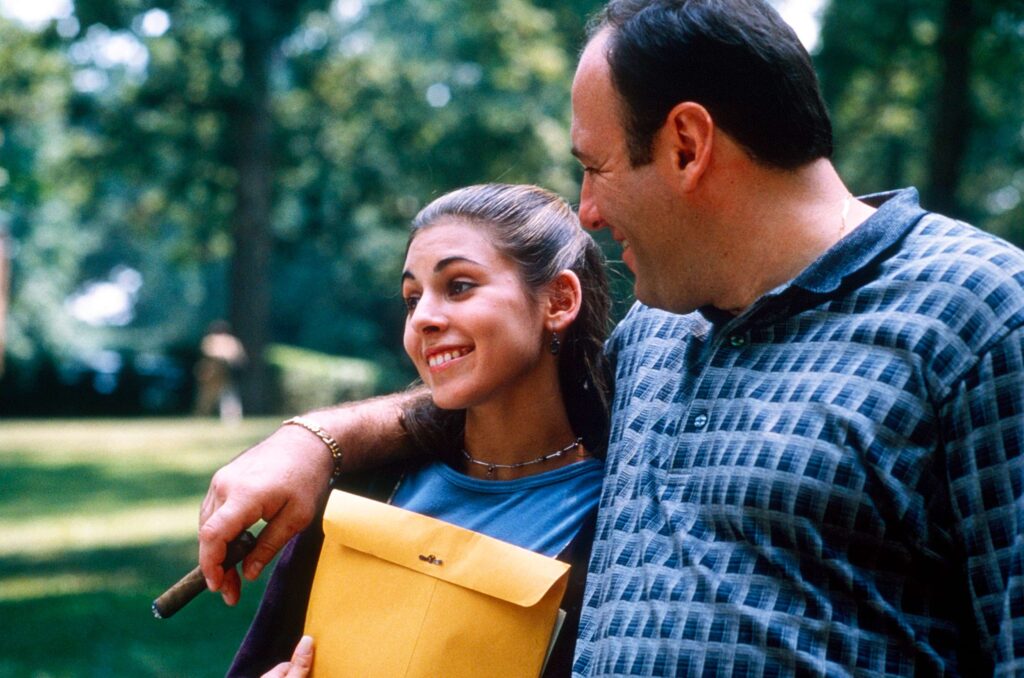 The early episode in which Tony (James Gandolfini) took daughter Meadow (Jamie-Lynn Sigler) on a college tour established that The Sopranos was a show about much more than organized crime. 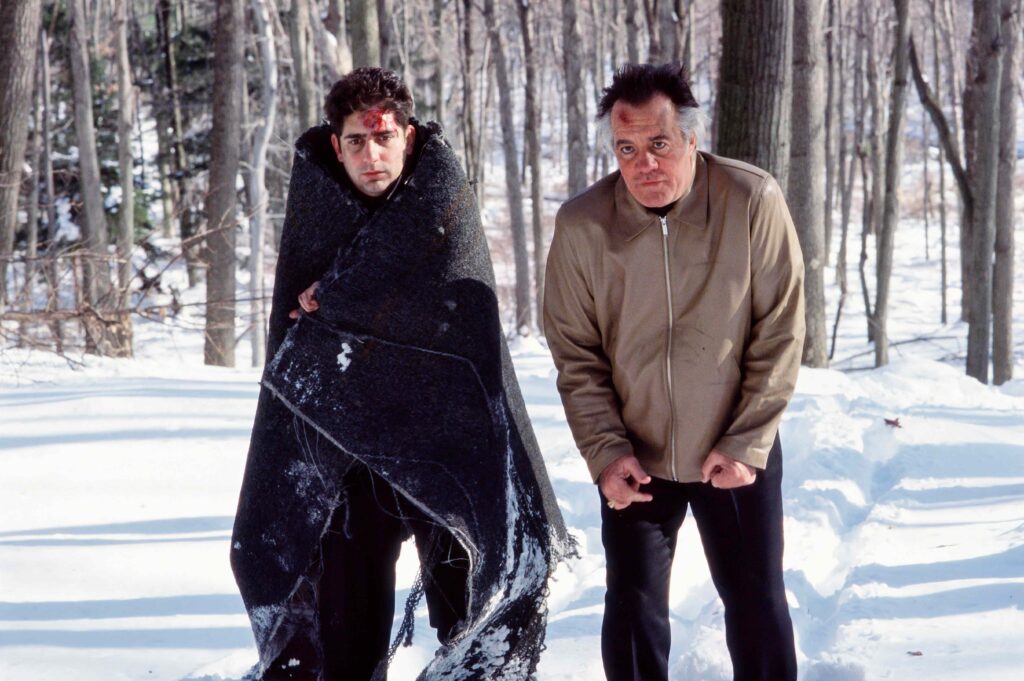 The Season Three episode in which Christopher Moltisanti (Michael Imperioli, left) and Paulie “Walnuts” Gaultieri (Tony Sirico) were lost in the Pine Barrens is among the series’ most beloved. 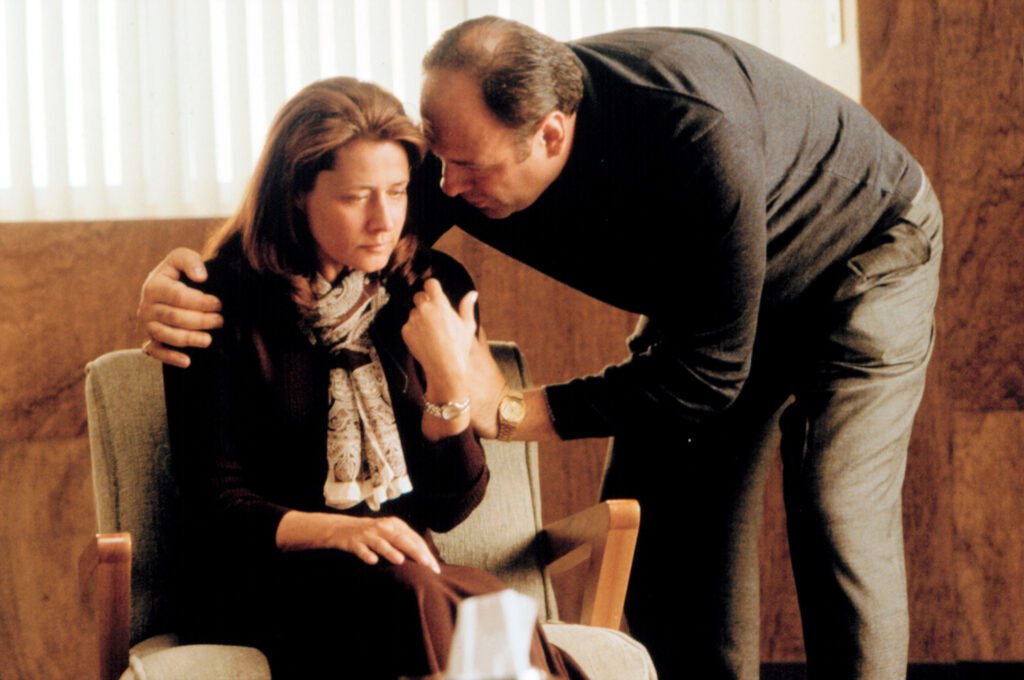 Tony’s sessions with Dr. Jennifer Melfi (Lorraine Bracco), such as this one from Season Three, could run the gamut of emotions. 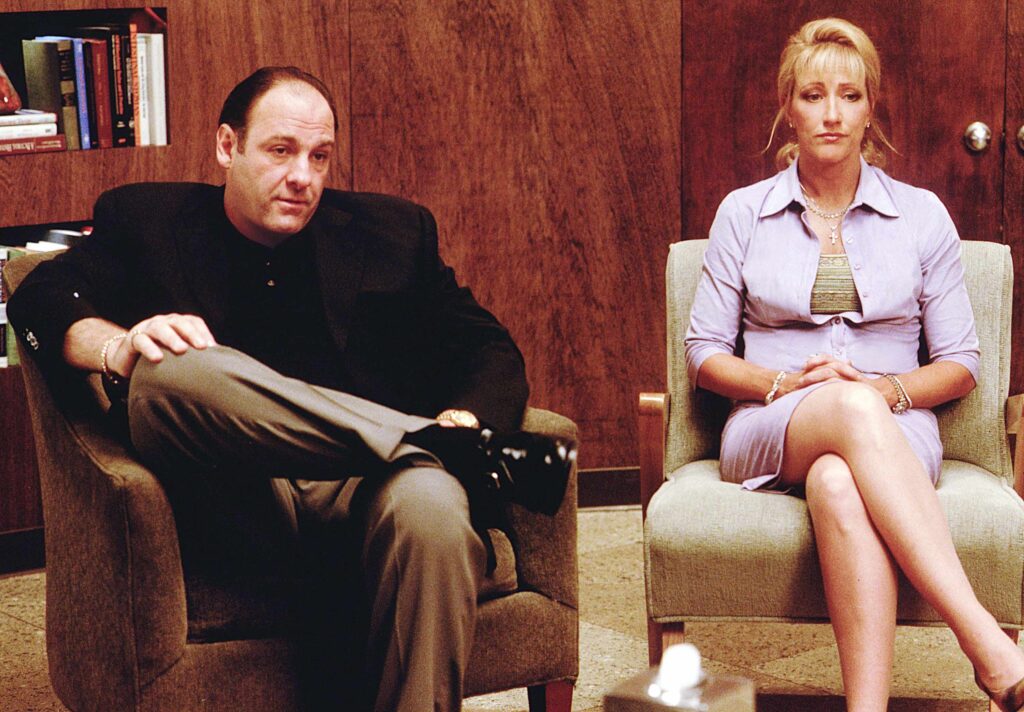 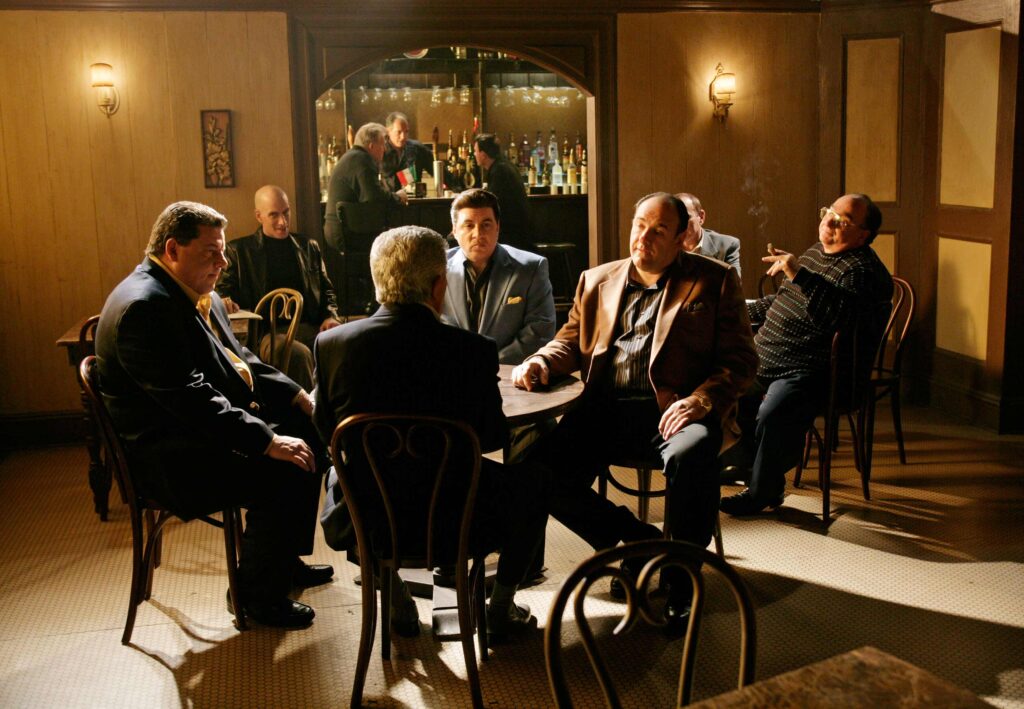 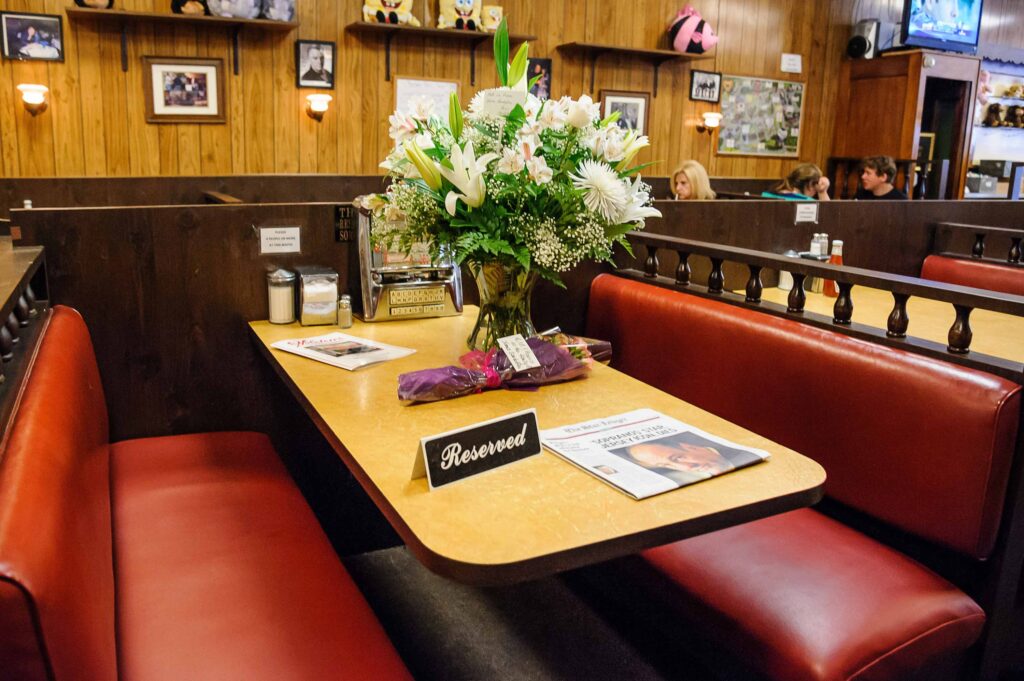 After the death of James Gandolfini in 2013, the actor was memorialized at Holsten’s Ice Cream Parlor in Bloomfield., N.J. 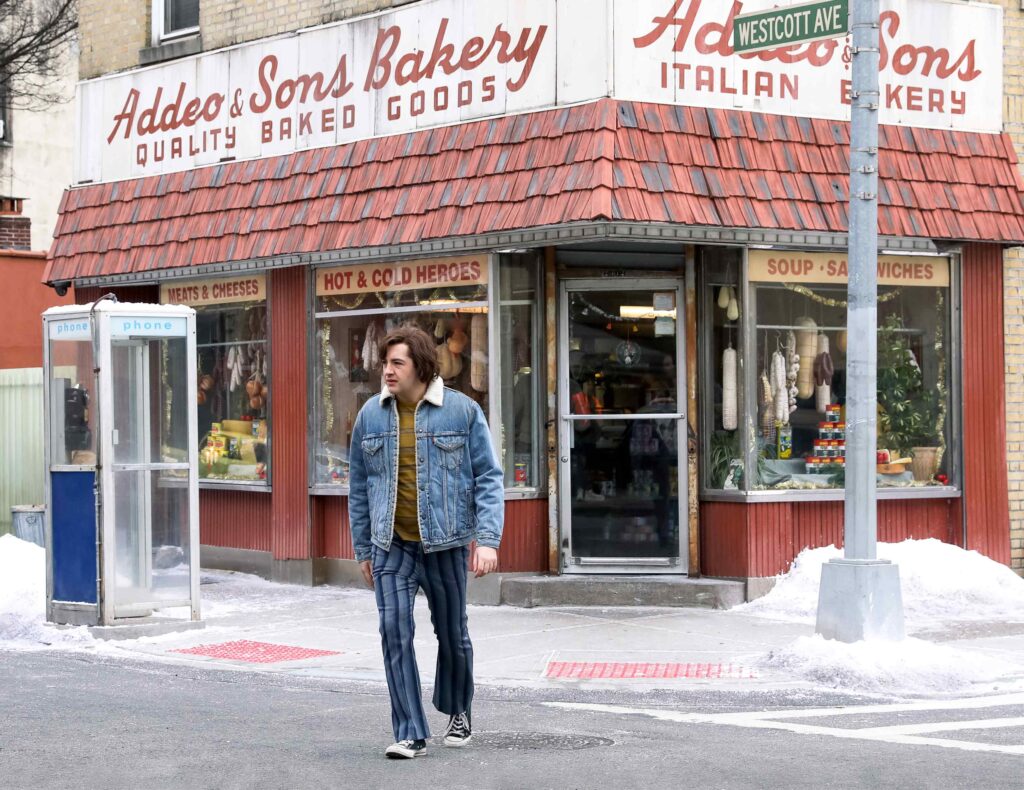 Michael Gandolfini, son of James, played young Tony Soprano in the 2021 movie ‘The Many Saints of Newark.’ 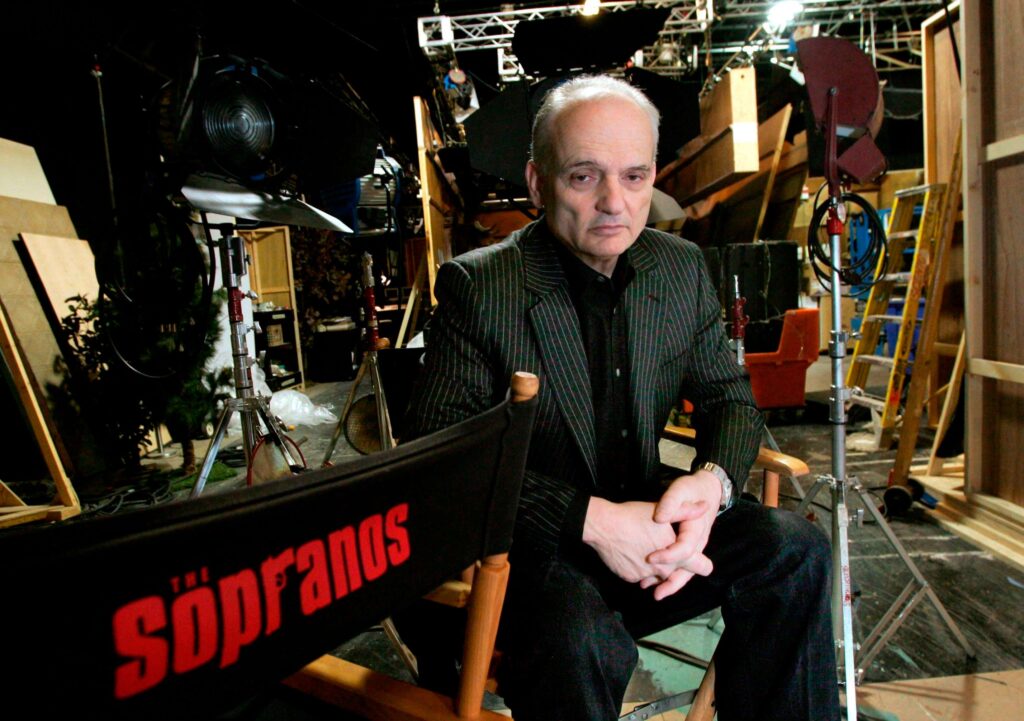 David Chase, creator and producer of the “The Sopranos,” posed on the set in New York City. 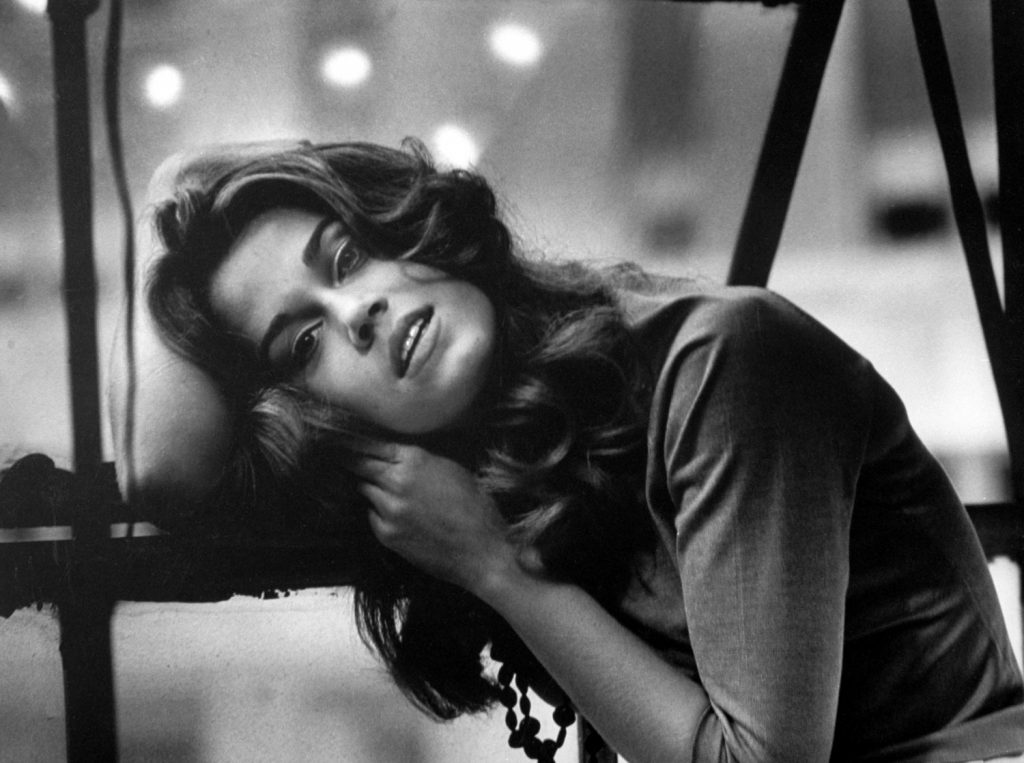 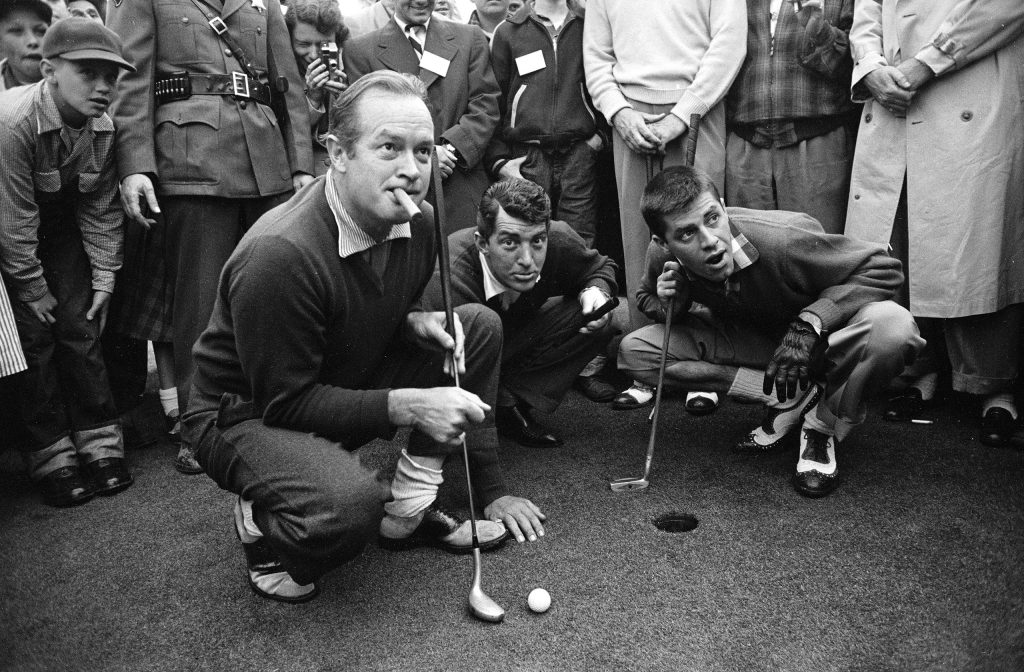 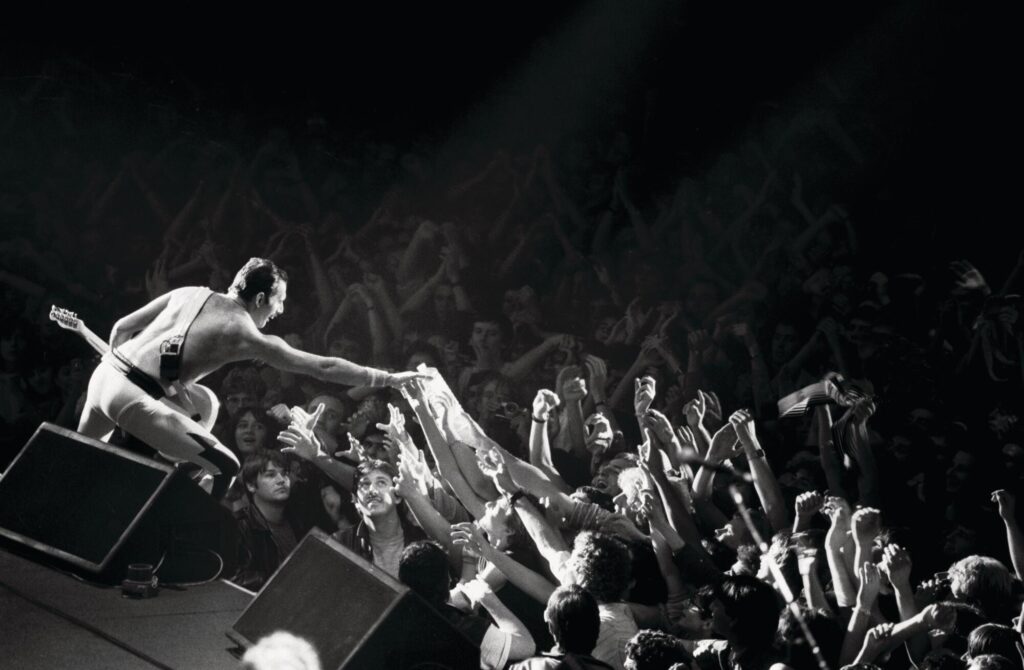 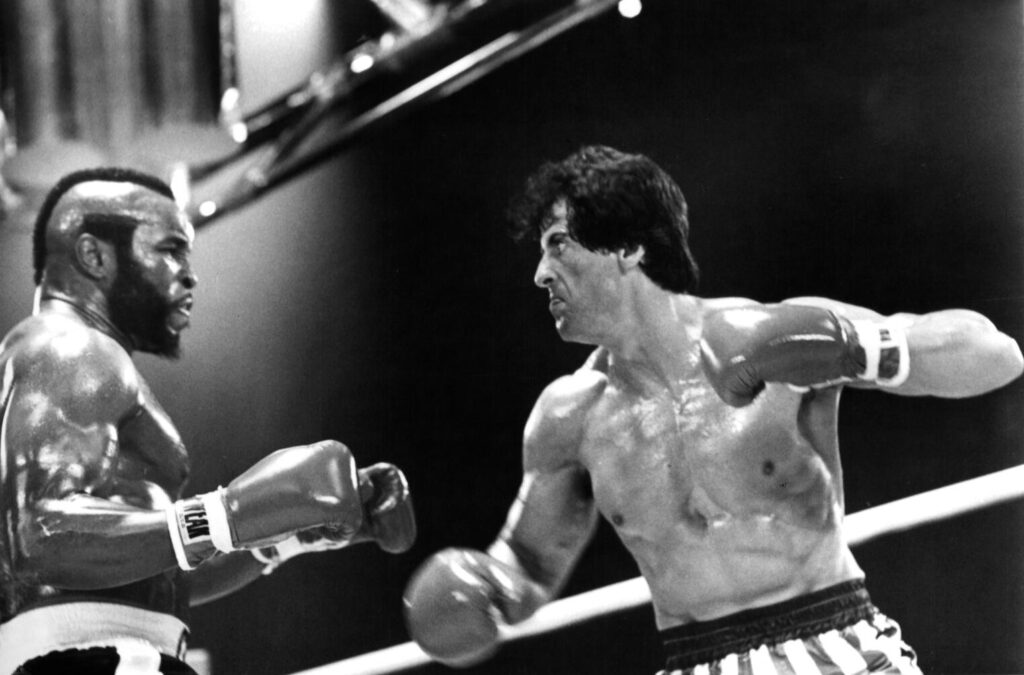