In the 1931 film `Dracula,’ the count (Bela Lugosi) met up with his nemesis, Van Helsing (Edward Van Sloan) .

The following is excerpted from the introduction to LIFE’s new special issue Vampires: Their Undying Appeal, available at newsstands and online:

The most consequential night in the history of fright occurred in June of 1816 at Villa Diodati on the banks of Lake Geneva, where the Romantic poets Lord Byron and Percy Shelley were vacationing with Shelley’s 19-year-old fiancée, Mary Godwin, her half-sister Claire Clairmont, and Byron’s physician and traveling companion, John Polidori. Confined to their villa by two weeks of torrential rain, they began telling ghost stories to amuse themselves. Three years earlier, Byron had written “The Giaour,” a poem that warns of a corpse who, “as Vampyre sent,” is torn from its grave to “suck the blood of all thy race.” On this particular evening in Switzerland, he suggested that each traveler should produce a supernatural tale as entertainment for the others.

At midnight, Dr. Polidori recorded in his diary, as Mary nursed her four-month-old baby, the group “really began to talk ghostly. L[ord] B[yron] repeated some verses of Coleridge’s ‘Christabel,’ of the witch’s breast; when silence ensued, and Shelley, suddenly shrieking and putting his hands to his head, ran out of the room with a candle. Threw water in his face and gave him ether. He was looking at Mrs. S[helley], and suddenly thought of a woman he had heard of who had eyes instead of nipples, which, taking hold of his mind, horrified him.”

By the end of that “wet ungenial summer,” Mary Shelley had conceived the germ of Frankenstein; or, The Modern Prometheus (1818), and Polidori, then 20, completed The Vampyre, a short novel whose profound creative impact still endures in literature, theater, television, and film.

Polidori’s vampire, the rakish Lord Ruthven—said to be based on Byron himself—is an amoral debaucher of young women with a “dead grey eye” who stalks London, drinking the blood of his victims. The Vampyre was delivered to the Countess of Breuss and pretty much forgotten until the spring of 1819, when, amid Polidori’s acrimonious falling out with Byron, it was published in the New Monthly Magazine. To capitalize on Byron’s notoriety, the publisher released The Vampyre under Byron’s name. Polidori was outraged at this violation of his copyright. For his part, Byron disavowed authorship: “I have a personal dislike to Vampires, and the little acquaintance I have with them would by no means induce me to reveal their secrets.”

Translated quickly into French, The Vampyre appeared in Paris as a popular stage play and gave birth to so many imitations that a decade later a critic complained, “There is not a theatre in Paris without a vampire!”

Stories about vampires have been circulating for thousands of years. Though just about every culture has showcased some form of vampire, anthropologists generally consider them a Slavic invention. They haunted the lore of Albania, where they were known as vurvulak; Bosnia (lampir); Croatia (vukodlak); and Montenegro (tenatz). Vampire comes from the old Slavic word obyrbi. “If anything unites the pre-Serbian undead, it would be the spreading of a mysterious plague,” said Al Ridenour, host of the podcast Bone and Sickle, a celebration of the intersection of horror, folklore, and history. “The sickness was not passed on necessarily by direct contact or bites but could be more of an evil miasma that accompanied the undead rising from the grave.” Plague survivors looking for a scapegoat would blame the first victim.

America’s own Vampire Panic in New England ran from the late 1700s to the late 1800s. Similar cases were documented in New Hampshire, Vermont, and Rhode Island, most linked to savage outbreaks of tuberculosis. In 1830, a “vampire heart” was reportedly torched on the town green of Woodstock, Vermont. In Manchester, New Hampshire, a 1793 heart-burning ceremony at a blacksmith’s forge drew hundreds of onlookers: “Timothy Mead officiated at the altar in the sacrifice to the Demon Vampire who it was believed was still sucking the blood of the then living wife of Captain Burton,” an early town history says. “It was the month of February and good sleighing.”

“The belief that circulated did not involve blood-drinking corpses, but the notion that those who had appeared to die of TB would live on in the grave, somehow feeding off the lives of those in the community in the process, causing them to succumb to the disease,” said Ridenour. There were at least 40 recorded instances in which corpses were exhumed, their vital organs burned, and stakes driven through their hearts. The most famous and possibly last of these was Mercy Brown.

During the 1880s, the town of Exeter, Rhode Island, was struck by an epidemic of consumption, as TB was then called. In 1883, Mary Eliza Brown died of the disease. Her oldest daughter, 20-year-old Mary Olive, died the following year. The entire town turned out for Mary Olive’s funeral and sang “One Sweetly Solemn Thought,” a hymn that she had picked out for the occasion. Not long after, the same illness struck Mary Olive’s 18-year-old brother Edwin, a strapping store clerk in excellent health. He left for Colorado Springs to take “the cure.”

In January 1892, Edwin’s 19-year-old sister Mercy Brown died. Then Edwin, having returned from Colorado Springs to Exeter “in a dying condition,” according to one newspaper account, took a turn for the worse. As he lingered on, a rumor gained purchase in the tight-knit farming community that the Brown family was cursed, and that one of the women was in fact not dead but secretly a vampire who was feasting “on the living tissue and blood of Edwin,” as the Providence Journal later put it. They persuaded the children’s father, George Brown, to allow the exhumation of all three bodies. Wielding shovels and pitchforks, a party of men went to the family burial plot in Chestnut Hill Cemetery and dug up the bodies. It was wintertime, and the remains of the long-dead Mary Eliza and Mary Olive were little more than bones. But the body of Mercy—who had died only a few months before and was kept mostly in a crypt above the ground—hadn’t much deteriorated. “The body was in a fairly well-preserved state,” the Journal’s correspondent wrote. “The heart and liver were removed, and in cutting open the heart, clotted and decomposed blood was found.”

Though the presiding physician noted the presence of “tuberculosis germs,” the villagers interpreted the presence of fresh blood as a sign that Mercy was undead. To stop members of her family from meeting the same vampiric fate, they gathered firewood and kindled a bonfire on a nearby rock. Then they cut out Mercy’s heart and lungs and burned them on the pyre. The ashes of her heart were brought back to the Brown homestead and mixed into a potion, which was fed to the ailing Edwin. 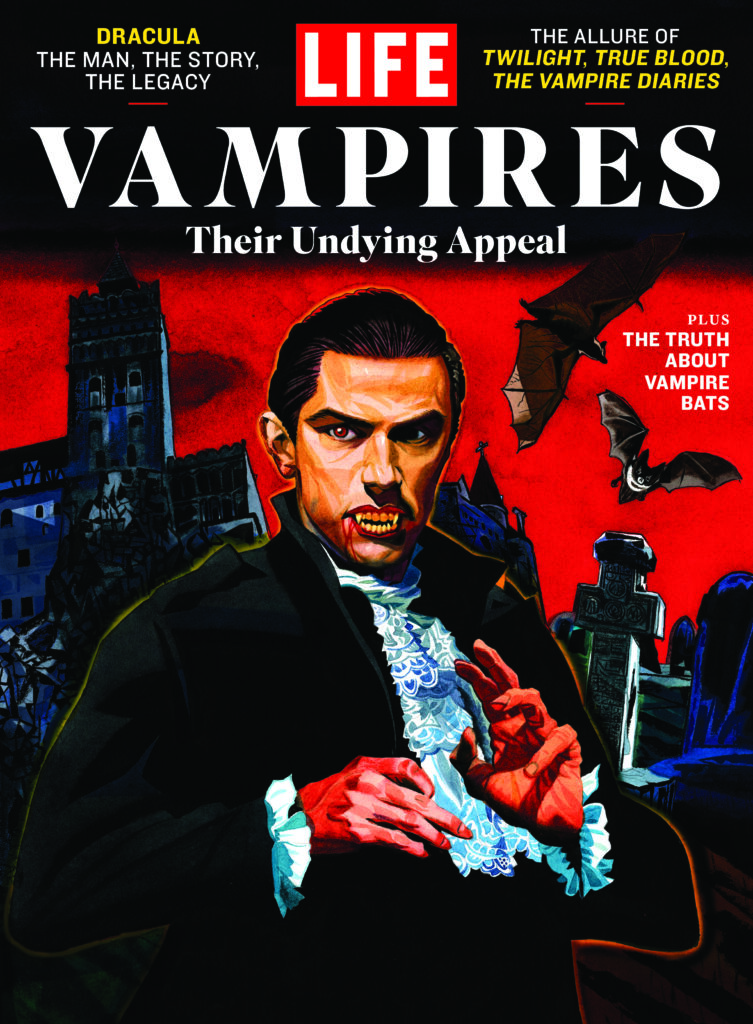 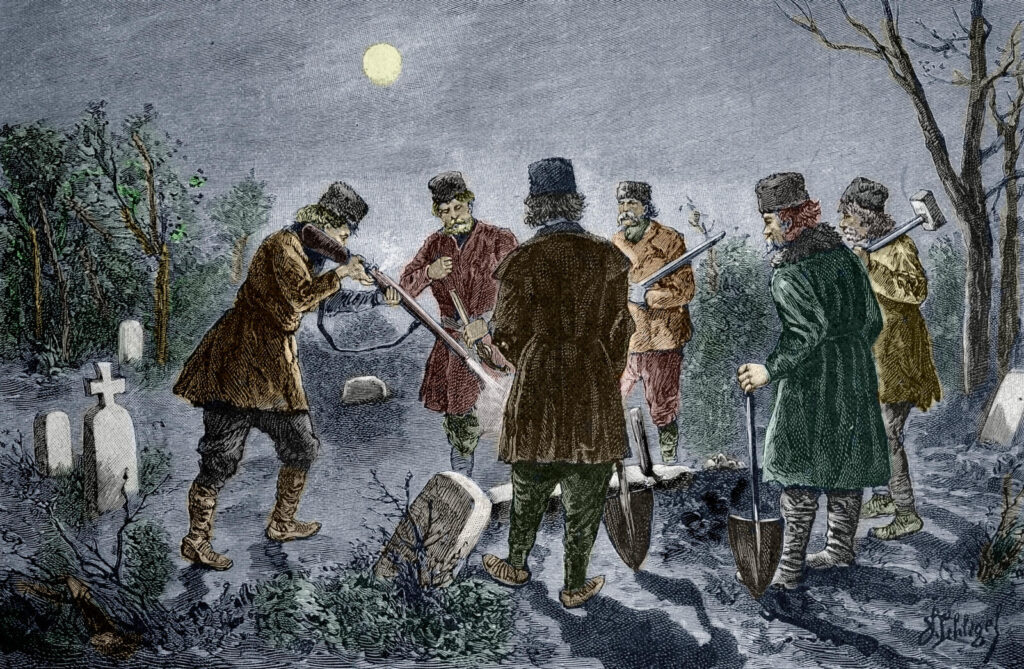 This 19th-century engraving showed men shooting a vampire with a stake already through his heart. 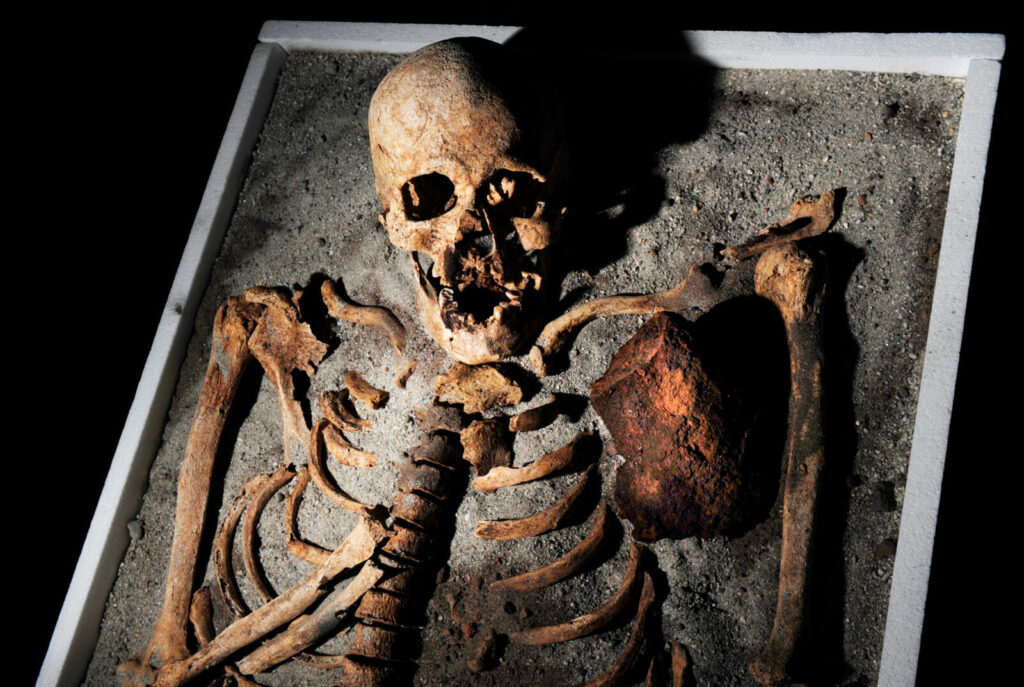 This 700-year-old skeleton from Bulgaria had its teeth removed and had been pinned down when it was buried out of a fear of vampirism. 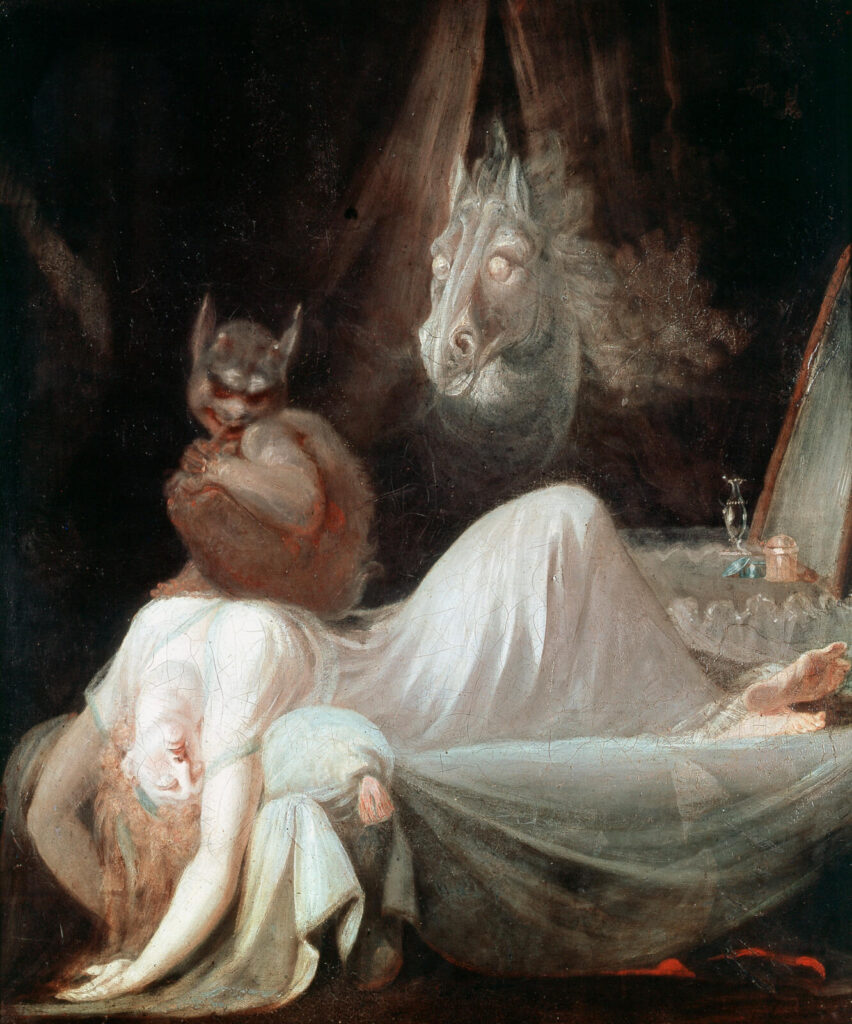 This 1781 painting by Henry Fuseli, `The Nightmare,’ was popular with the public and reproduced often in its day. 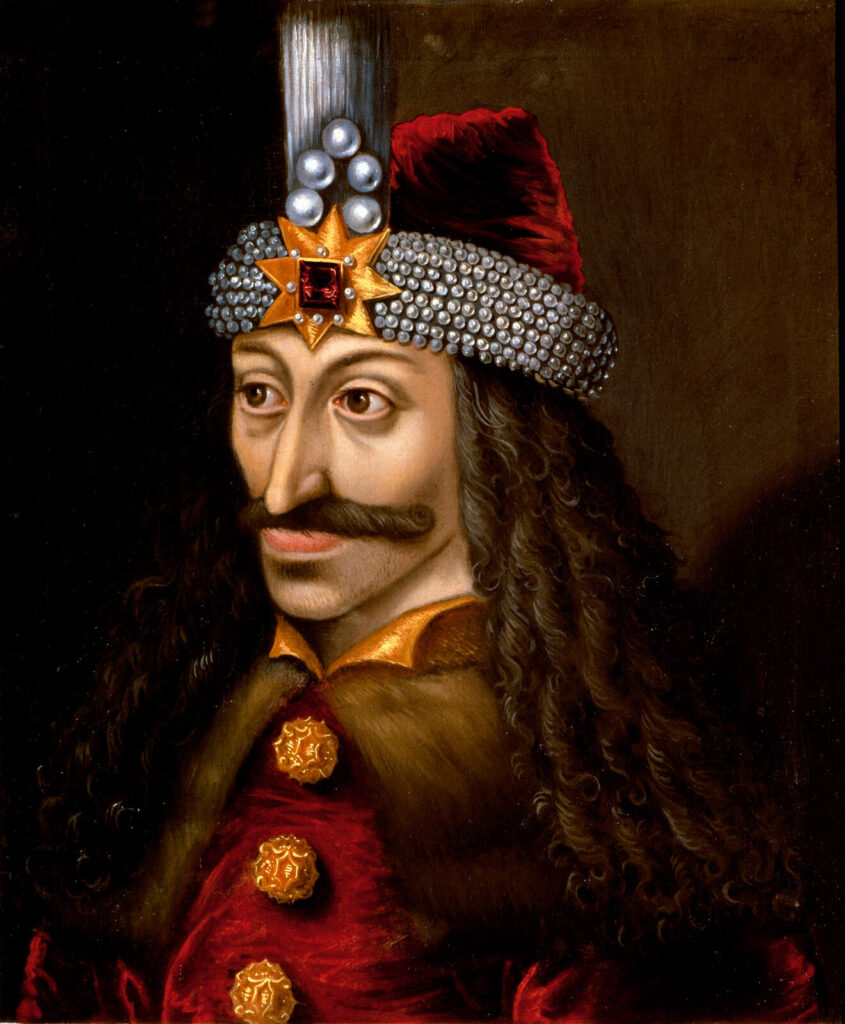 Vlad the Impaler, who lived in the 15th century and is shown here in a 16th century portrait, provided the inspiration for Bram Stoker’s Dracula. 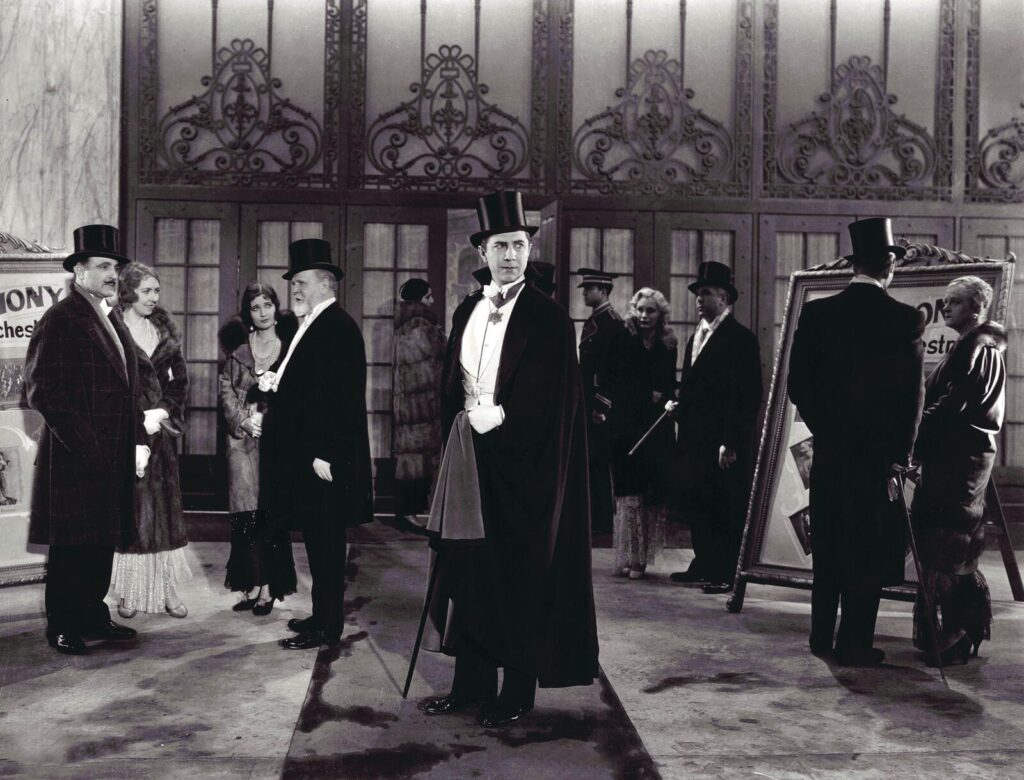 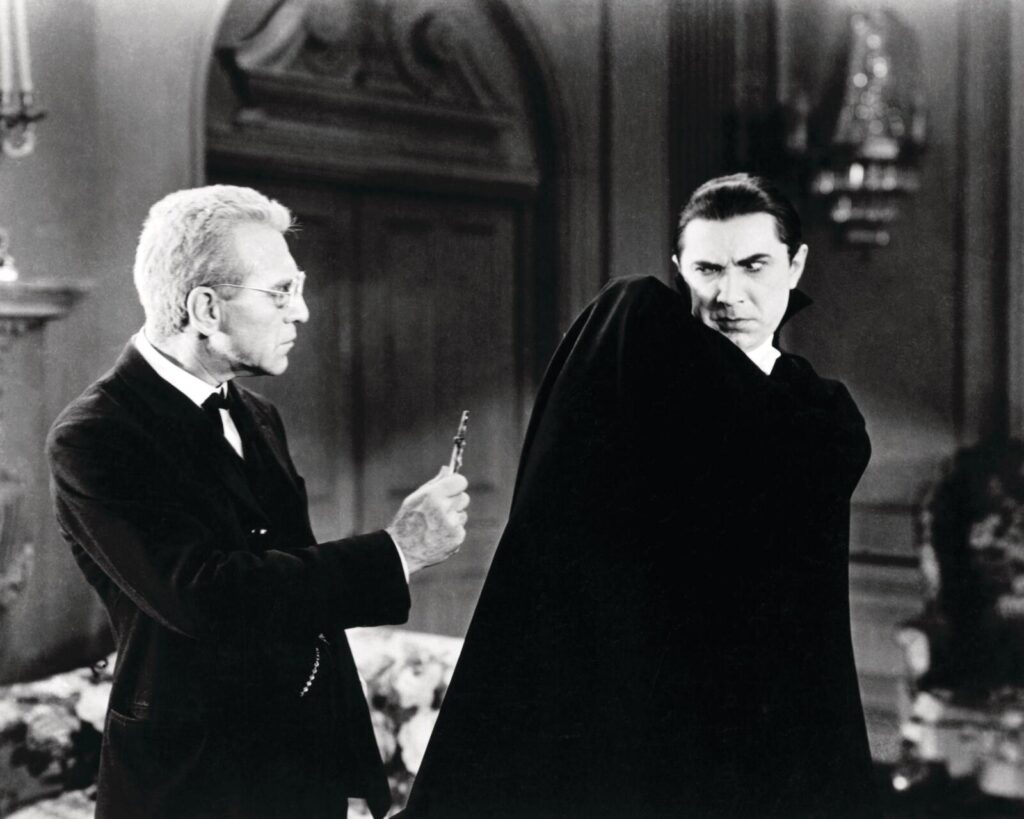 In the 1931 film `Dracula,’ the count (Bela Lugosi) met up with his nemesis, Van Helsing (Edward Van Sloan) . 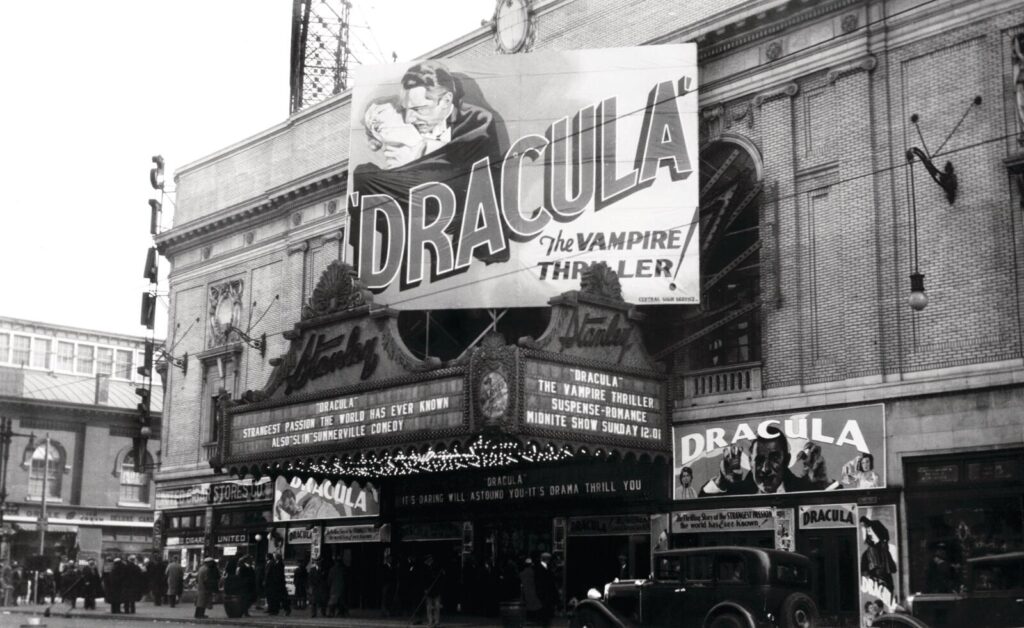 Dracula drew crowds to the Stanley Theater in Jersey City, N.J. in 1931. 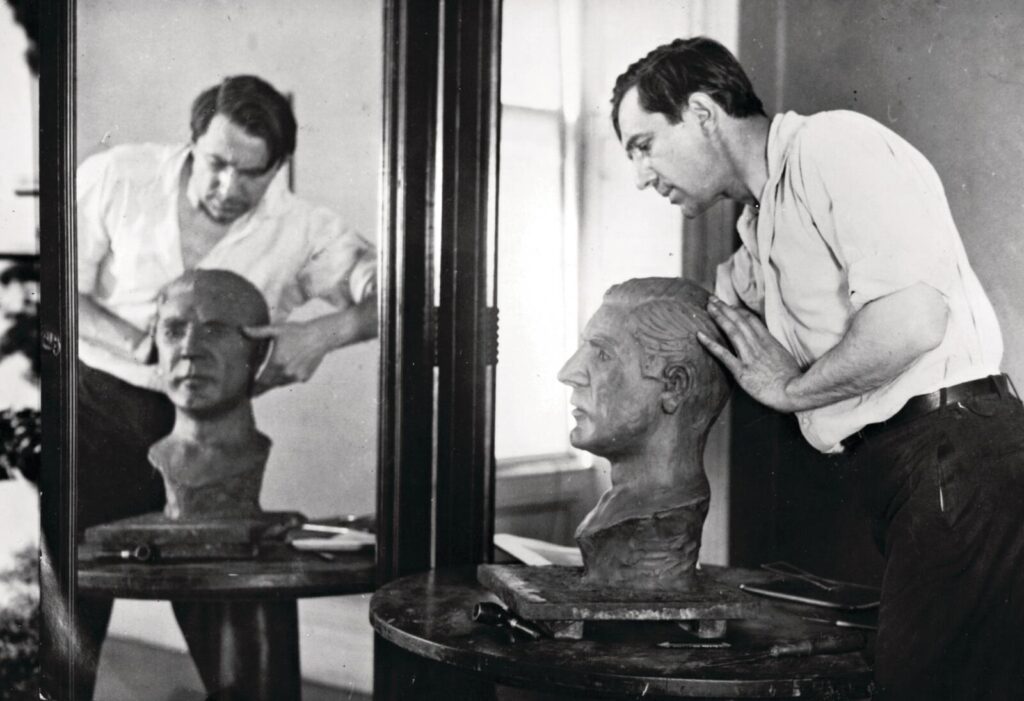 `Dracula’ star Bela Lugosi, who played in other horror movies through the 1930s, made a sculpture of his own head, 1932. 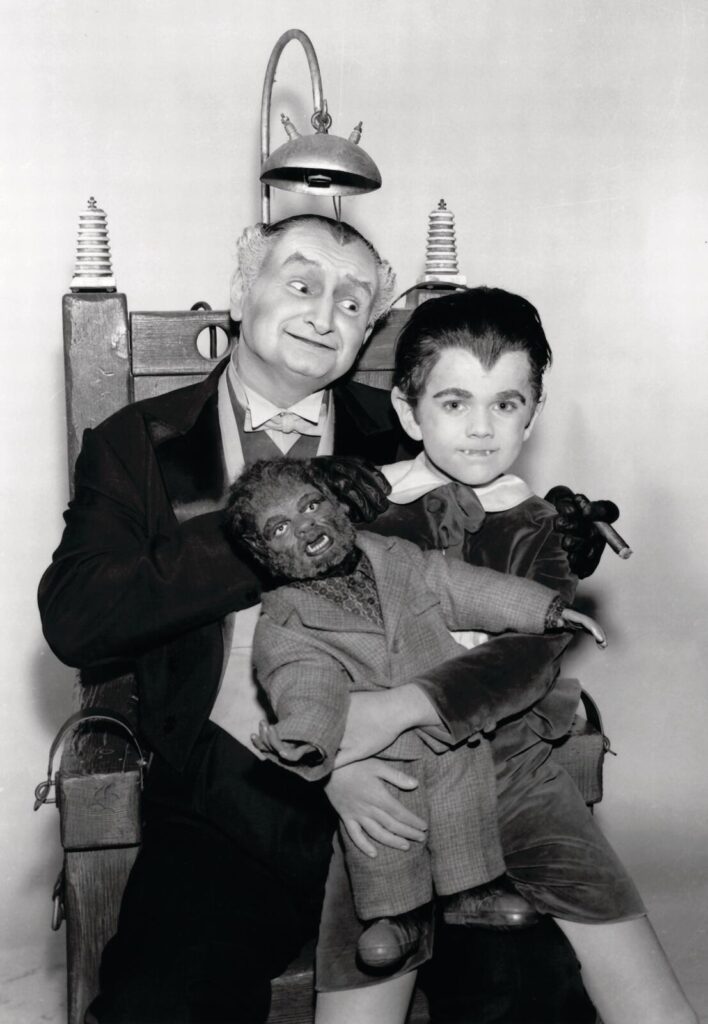 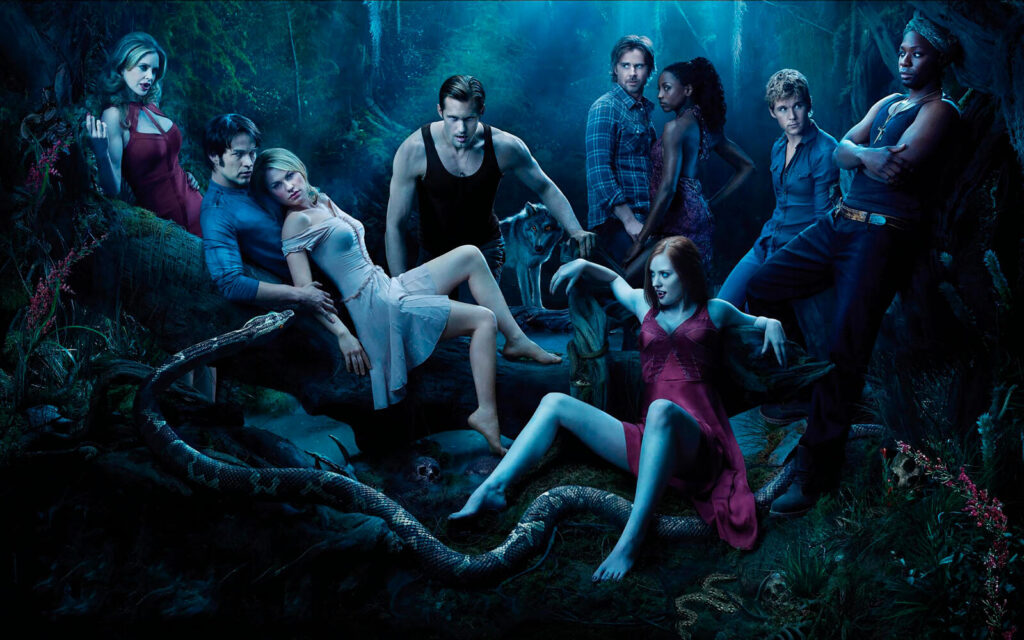 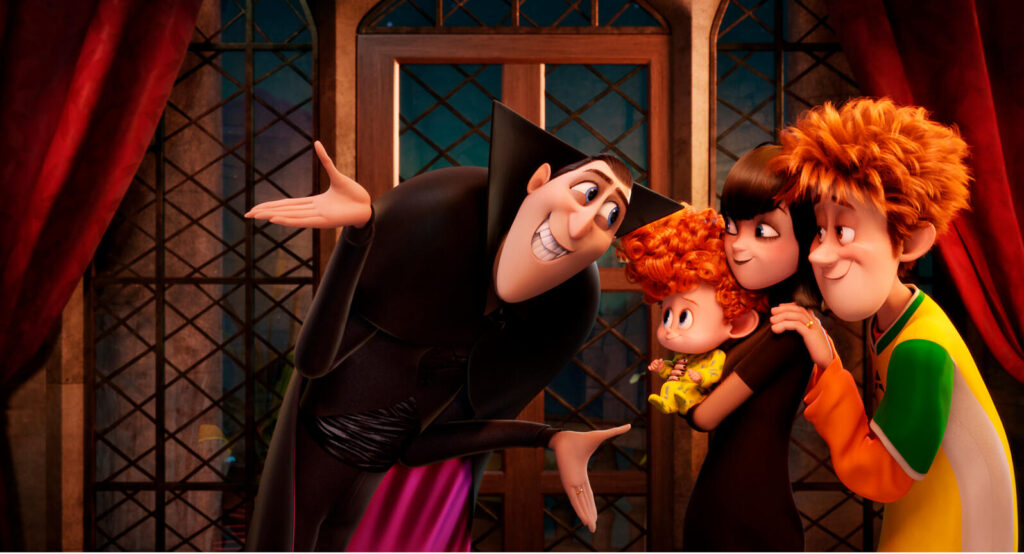 In the comic 2015 movie Hotel Transylvania 2, the role of Dracula was voiced by Adam Sandler.