Anne Frank: Her Life and Her Legacy

Anne Frank’s facsimile diary on display in the Anne Frank museum in Amsterdam, the Netherlands.

Excerpted from LIFE’s Anne Frank: Her Life and Her Legacy.

On June 12, 1942, Anne Frank received a small diary for her 13th birthday. She and her family had been living in Amsterdam for nine years after fleeing their native Germany in 1933, when the Nazis gained power and began stripping Jews of their most basic rights. Although the Franks found stability for several years, they could not escape the wave of turmoil and repression sweeping across Europe. Less than a month after Anne received her diary, she and her family went into hiding to avoid being sent to the Nazi camps.

For the next two years, Anne confided her innermost thoughts to her diary. Her chronicles of daily life paint a picture of a bright girl—full of hopes and fears and love for her family and friends—navigating the passage from childhood into adulthood in a savagely cruel world that could not crush her heart, imagination, and dreams of the future. In one entry in 1944, she described her love of writing and her desire to make a career of it one day, saying, “I want to be useful or bring enjoyment to all people, even those I’ve never met. I want to go on living even after my death.”

She got her wish far too soon. Her diary comes to an abrupt end in August of 1944, when she and others hiding in the “Secret Annex” at Prinsengracht 263 were discovered, arrested, and sent to concentration camps. Anne, her sister, Margot, and her mother, Edith, all died there. Her father, Otto, miraculously survived and upon returning to Amsterdam learned of Anne’s diary. He dedicated the rest of his life to sharing her story with the world so that the same tragedy that befell his family and millions of others might never be repeated.

Now, years since the first publication of her diary in 1947, Anne Frank endures as one of the great messengers of our common humanity. Through her courage, her hope, and her unshakable faith in the goodness of people—despite the grave injustices visited upon her and her family throughout her brief life—she continues to give a voice and a face to the six million Jews who lost their lives in the Holocaust. Her short life left a long legacy, touching and inspiring generation after generation of people she never met.

I will never forget visiting the Anne Frank House when I was just 23 and thinking that I had already been alive eight years longer than she had been allowed to live. Like millions of people who have been moved by Anne Frank’s story, I have tried my best since then to live my life in a way that redeems the years she could not have. Today, the Clinton Presidential Center in Little Rock is honored to be home to a sapling propagated from the tall chestnut tree outside the Anne Frank House. Just as Anne Frank looked at that tree’s branches from her hiding place and dreamed of a better life, I hope that our tree will remind all visitors to the center that we are duty bound to share the future and ensure that the atrocities of the past are never repeated.

In this deeply troubled time when so many people around the world are divided by religious, racial, and ethnic differences, the lessons of Anne Frank’s life are more important than ever. We would all do well to remember the wisdom of a young girl who taught us that we are all diminished when any person suffers unfairly because of who he or she is—and that our differences make life more interesting, but our common humanity matters more.

—President Bill Clinton, from his introduction to Anne Frank: Her Life and Her Legacy.

Here are a selection of the photos that appear in LIFE’s tribute to Anne Frank. 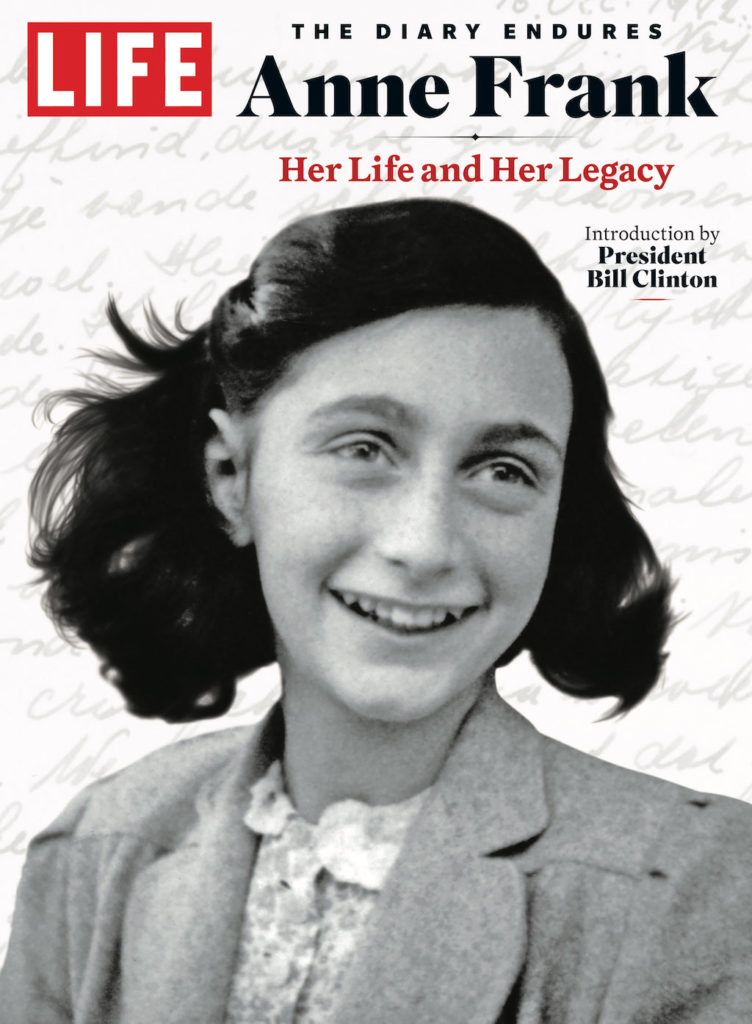 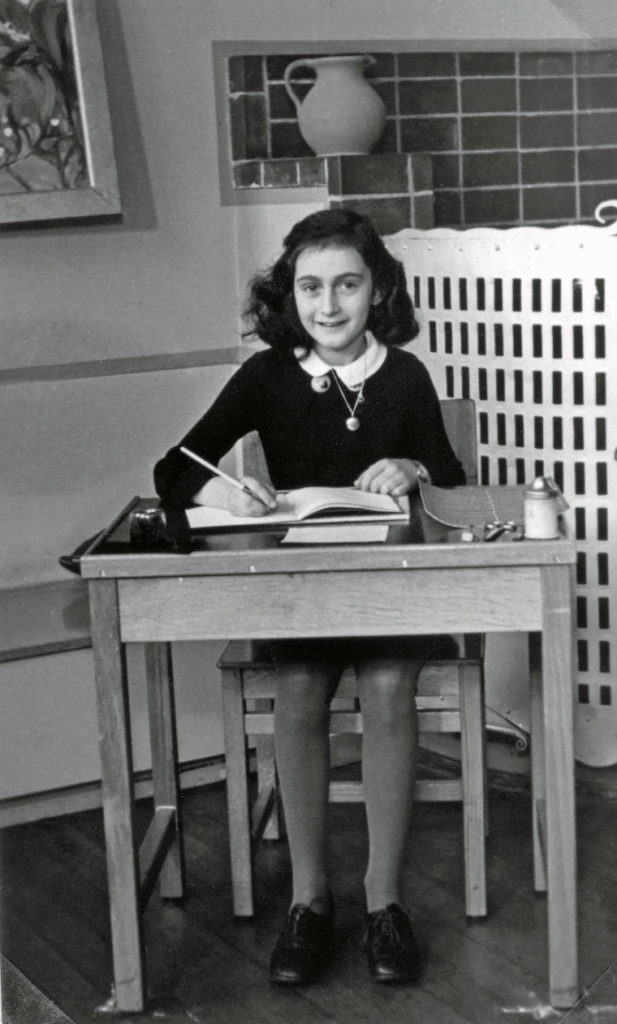 Anne Frank at school, writing in her journal, 1940. 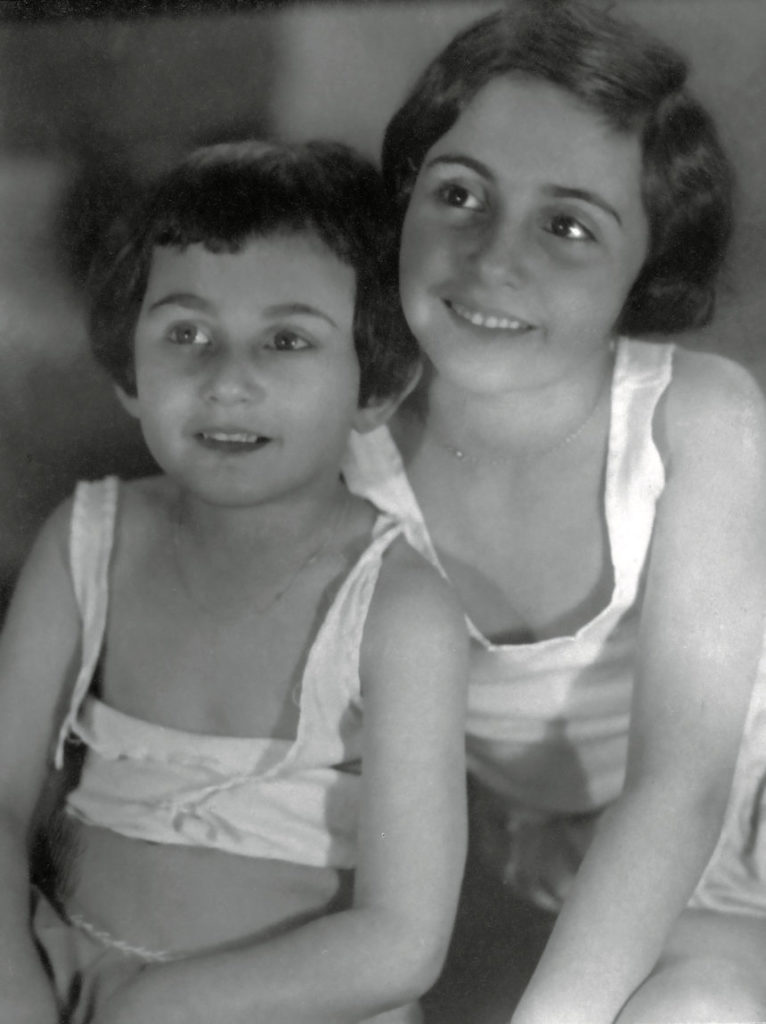 Anne Frank (left) and her sister, Margot, in a portrait from the photo album of Margot, 1933. 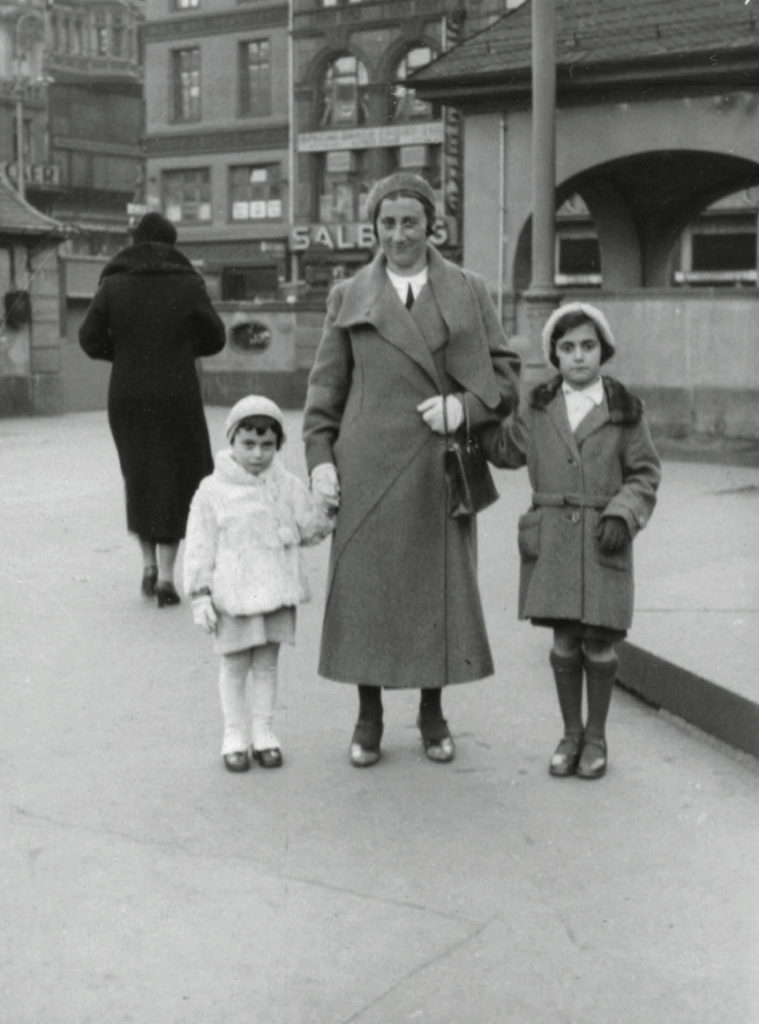 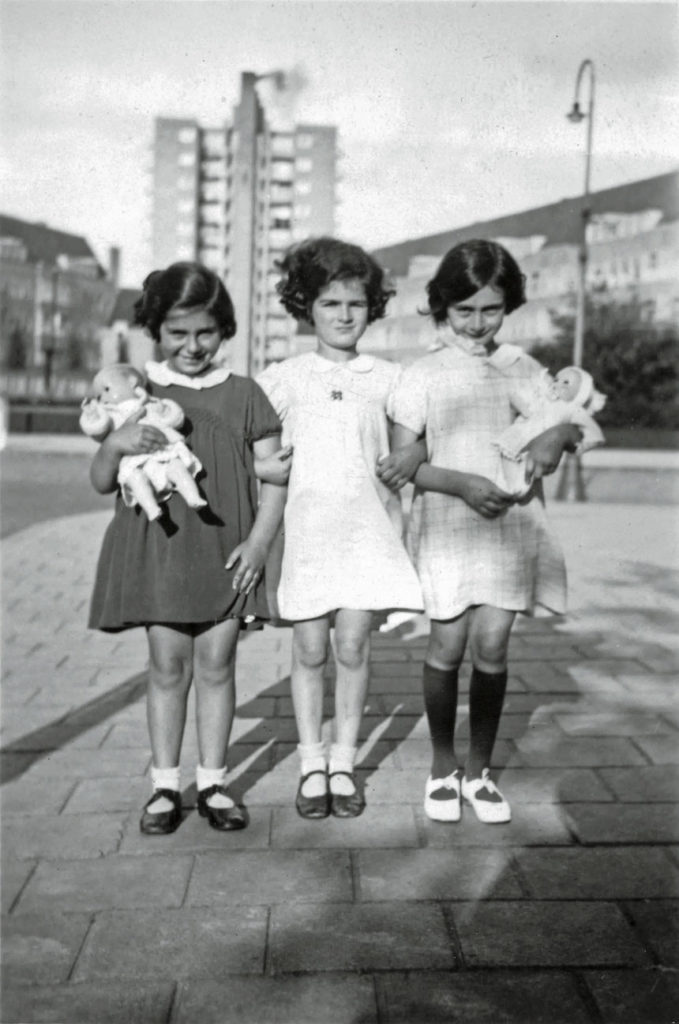 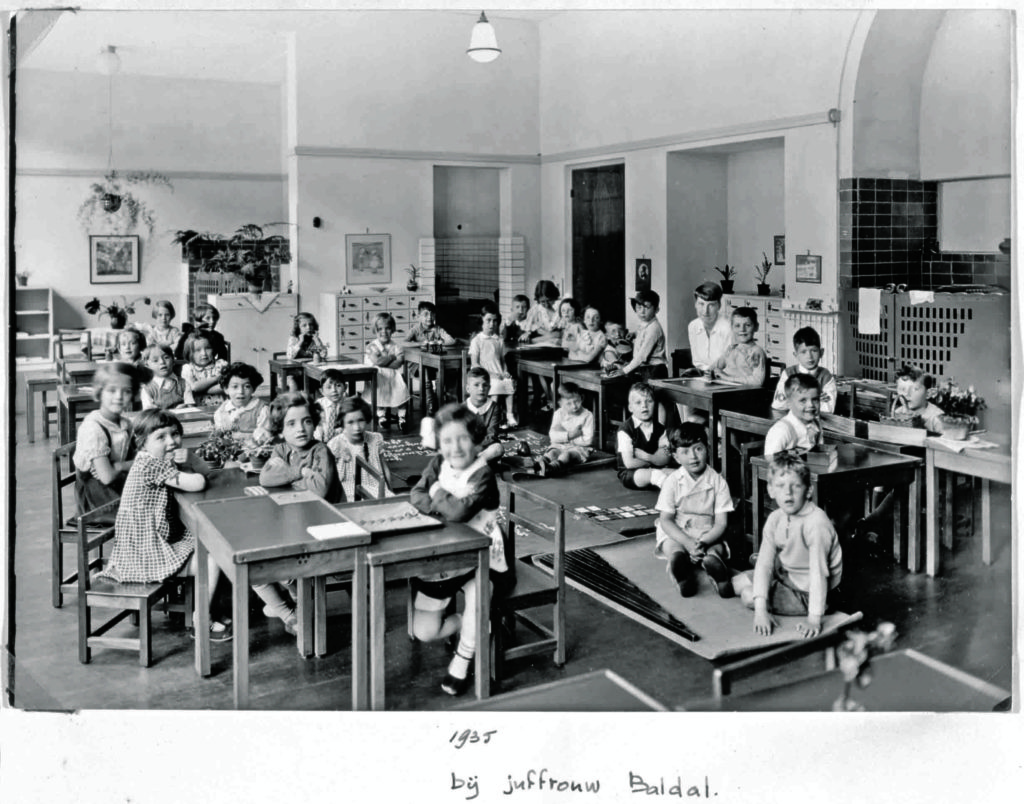 Photo taken from Anne Frank’s photo album of Mrs Baldal’s class at a Montessori school in Amsterdam, 1935. Anne Frank is sitting in the corner near the door between two desks. 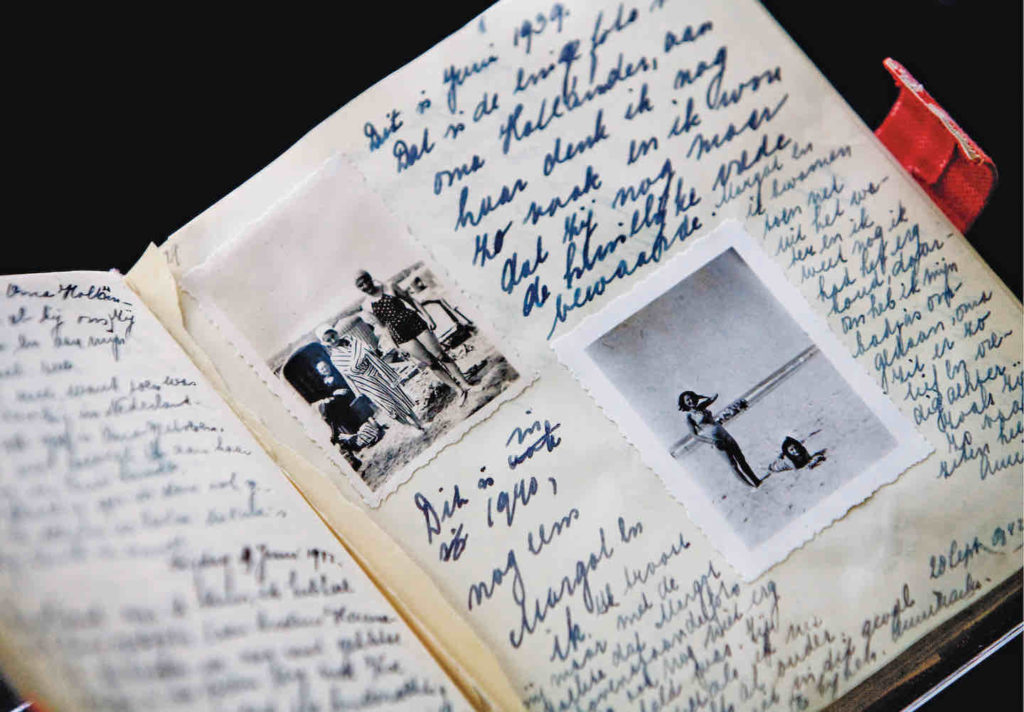 Anne Frank’s facsimile diary on display in the Anne Frank museum in Amsterdam, the Netherlands.

The exterior of the Amsterdam office-warehouse which was hiding place for the Frank Family. 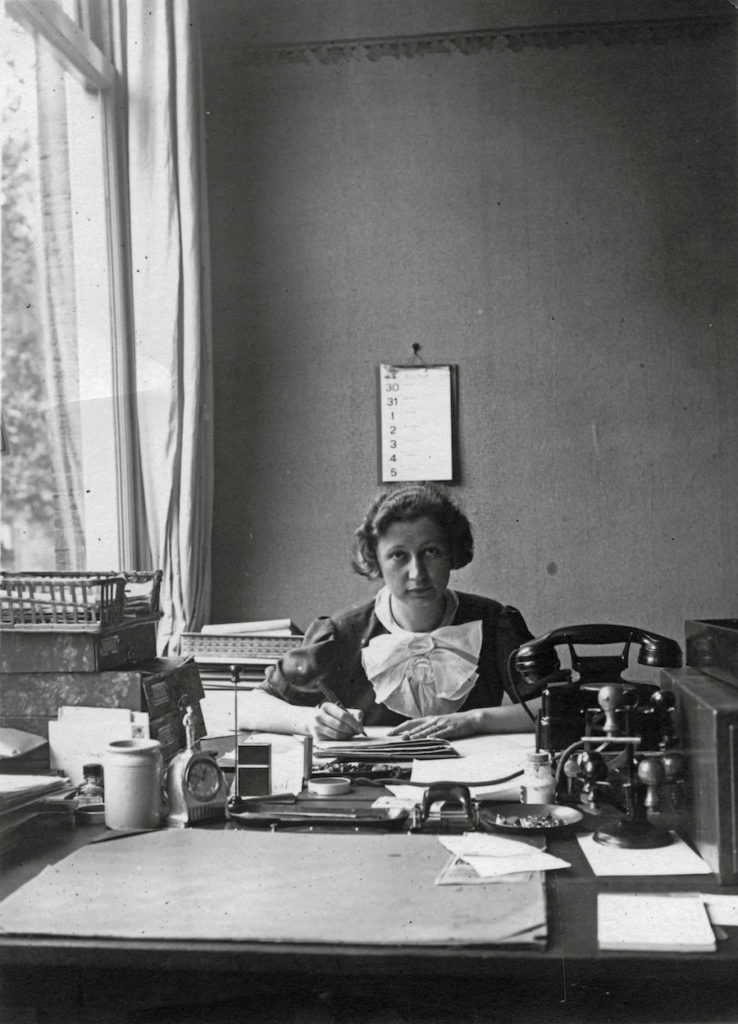 Miep Gies works at the Opekta office at Singel 400, Amsterdam, September 1936. She helped to conceal Anne Frank and her family in the other Opekta office during the German occupation of the Netherlands. 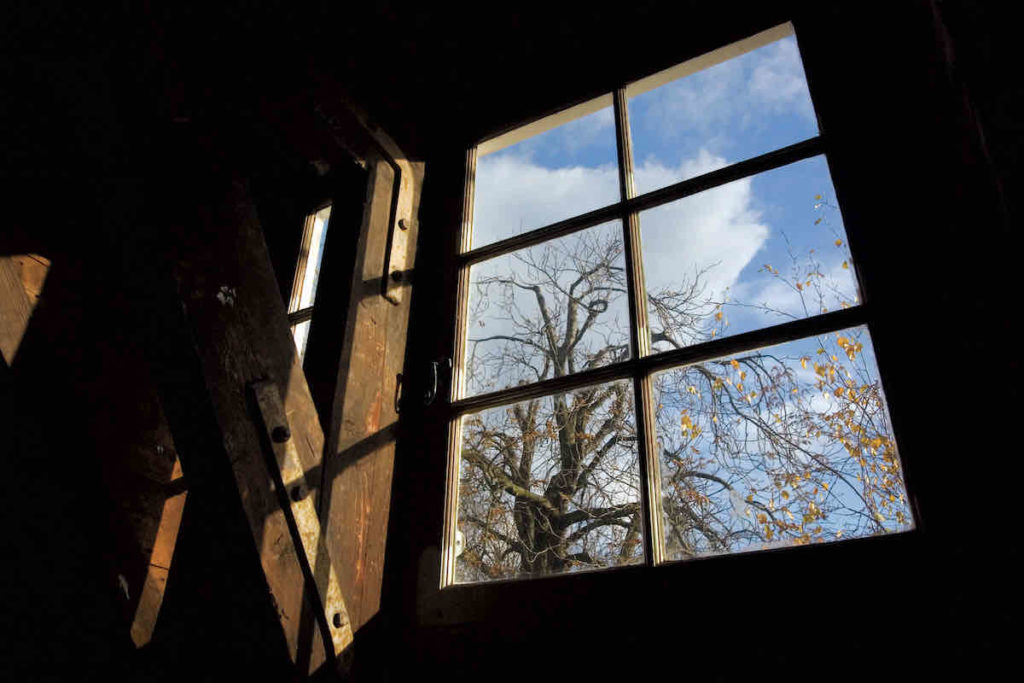 The chestnut tree which comforted Anne Frank while she hid from the Nazis during World War II is seen from the attic window in the secret annex at the Anne Frank House in Amsterdam, 2007. 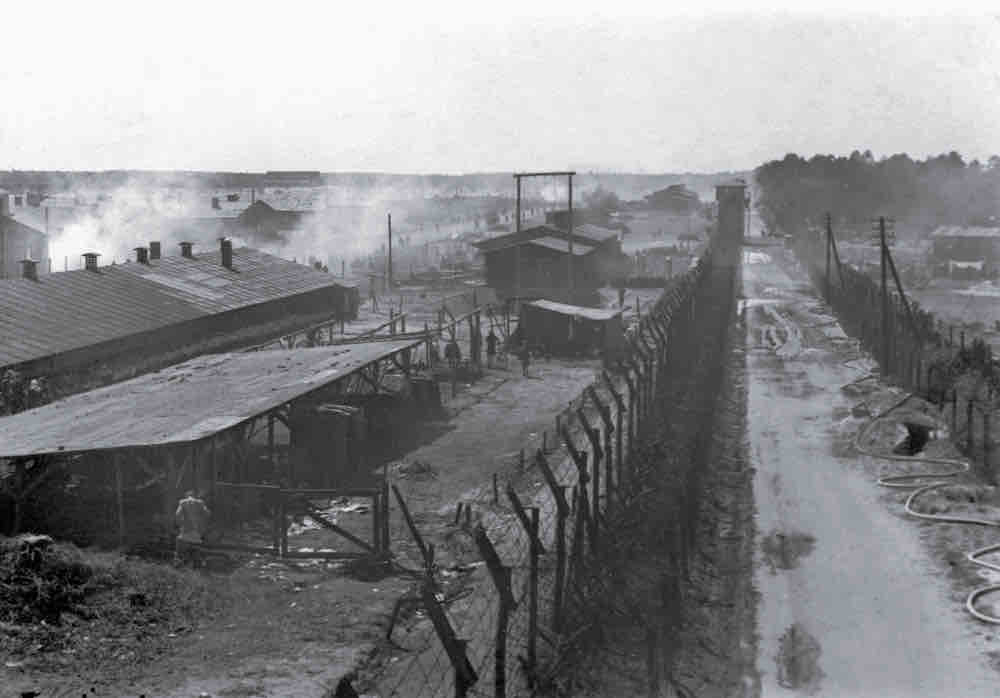 Anne Frank died of typhus in February 1945 at the Bergen-Belsen Concentration camp; here the camp is shown after it was liberated by British troops, April 15, 1945. 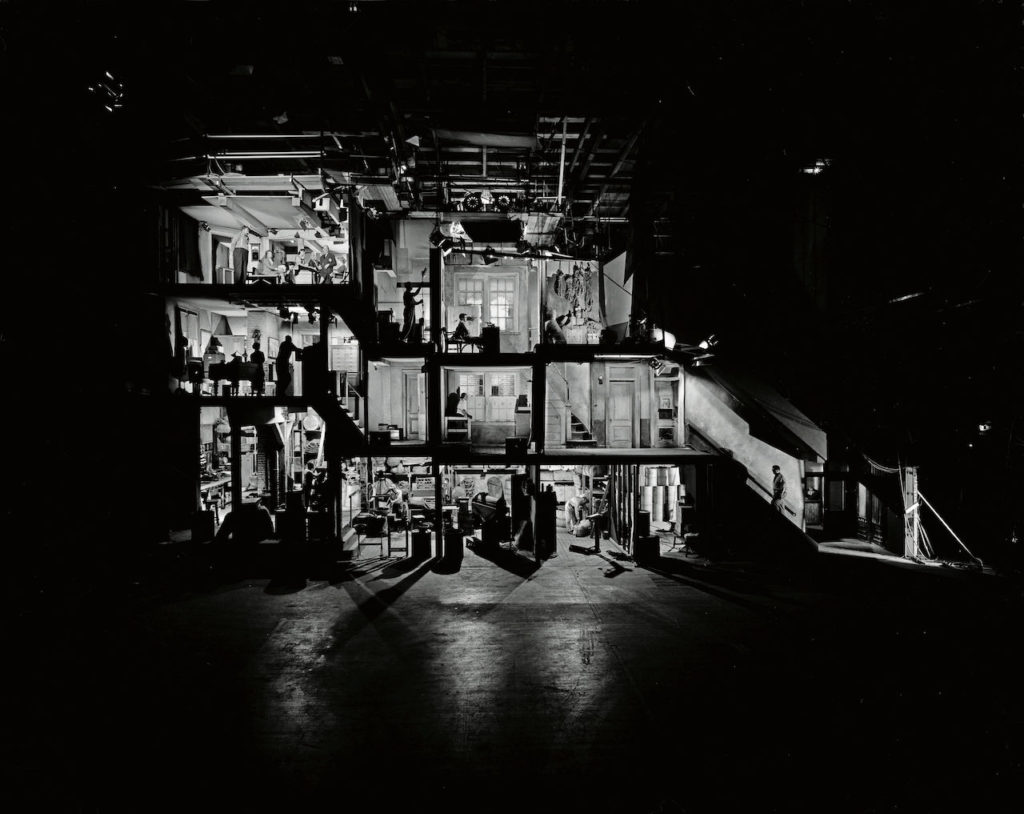 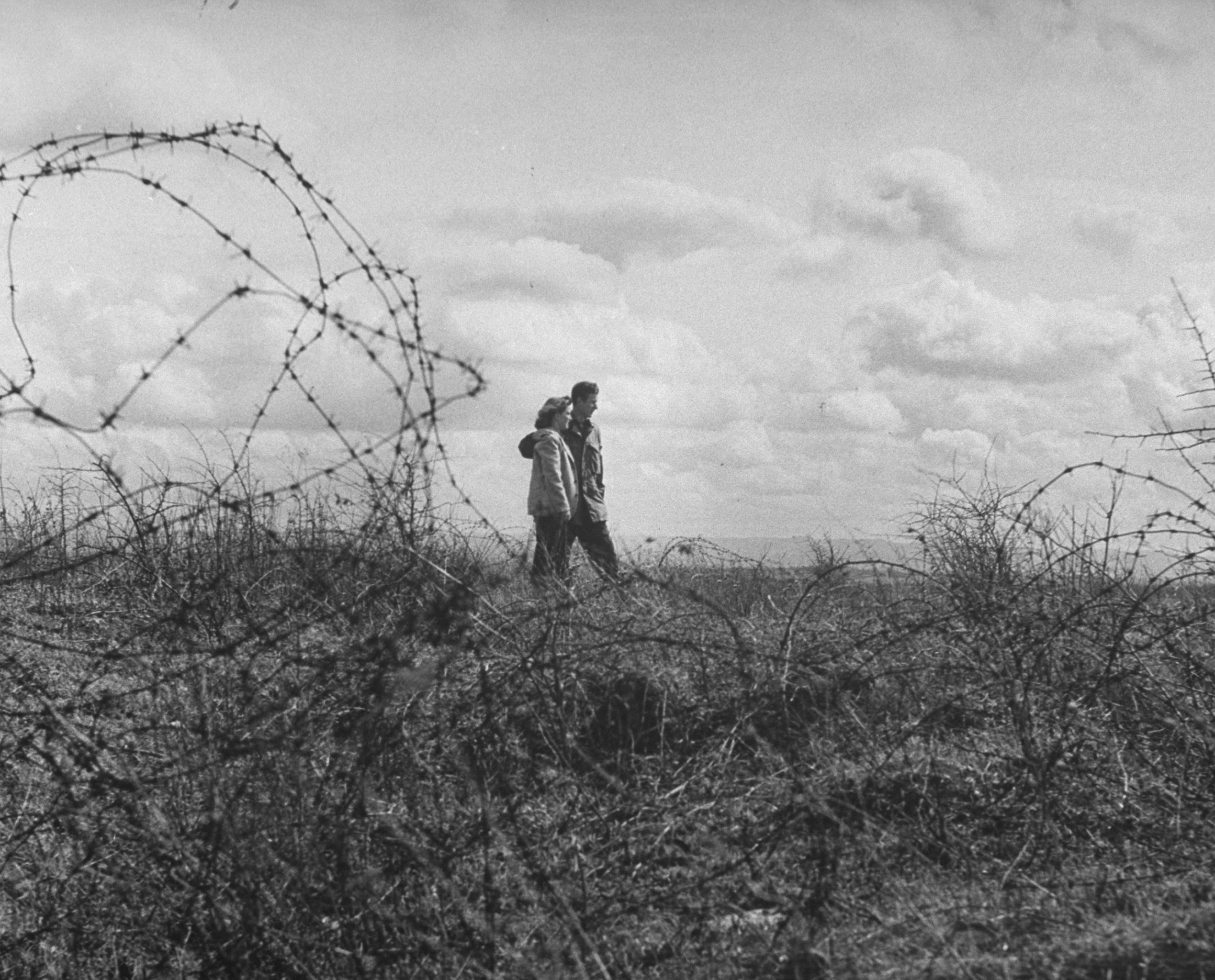 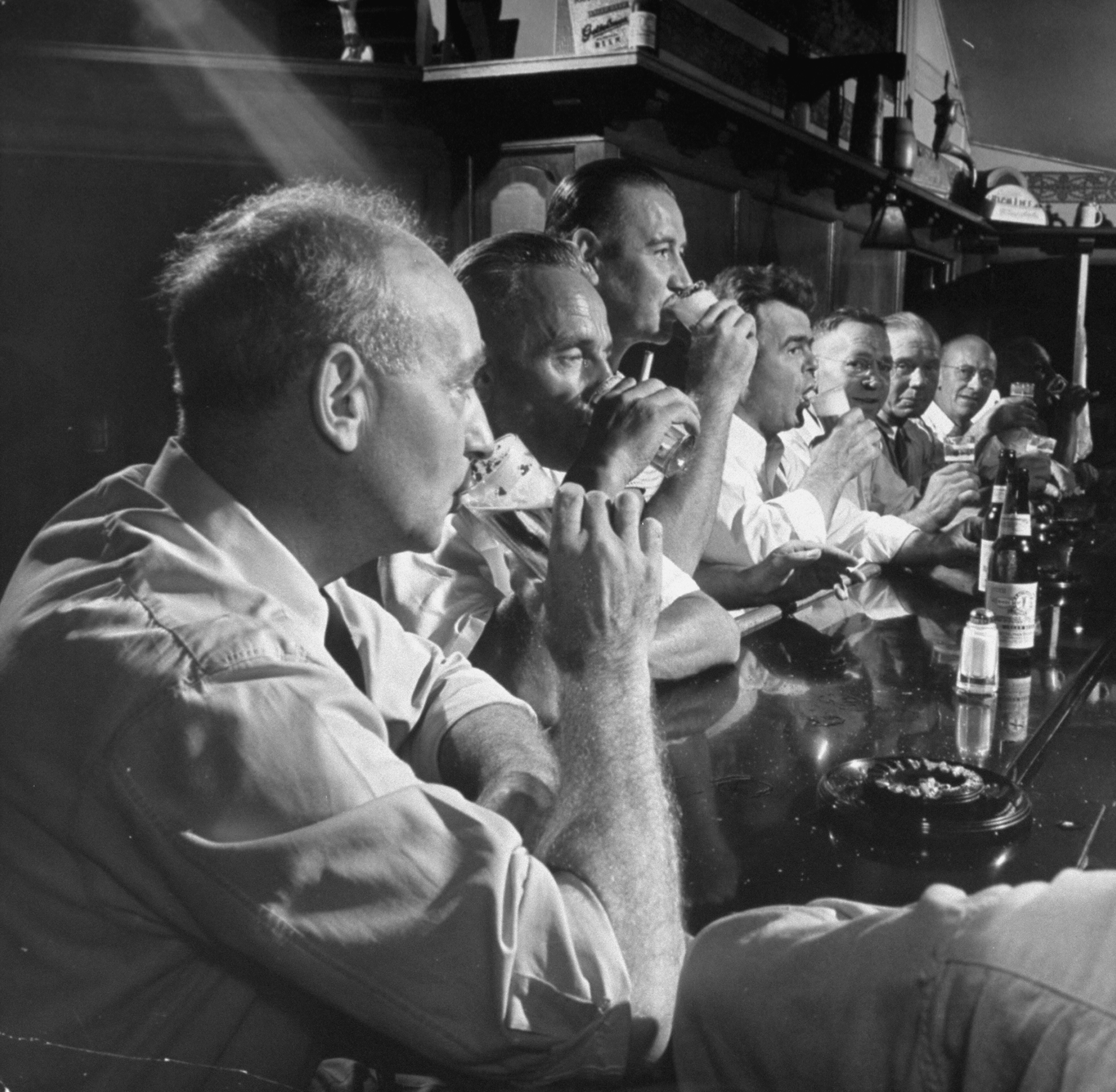 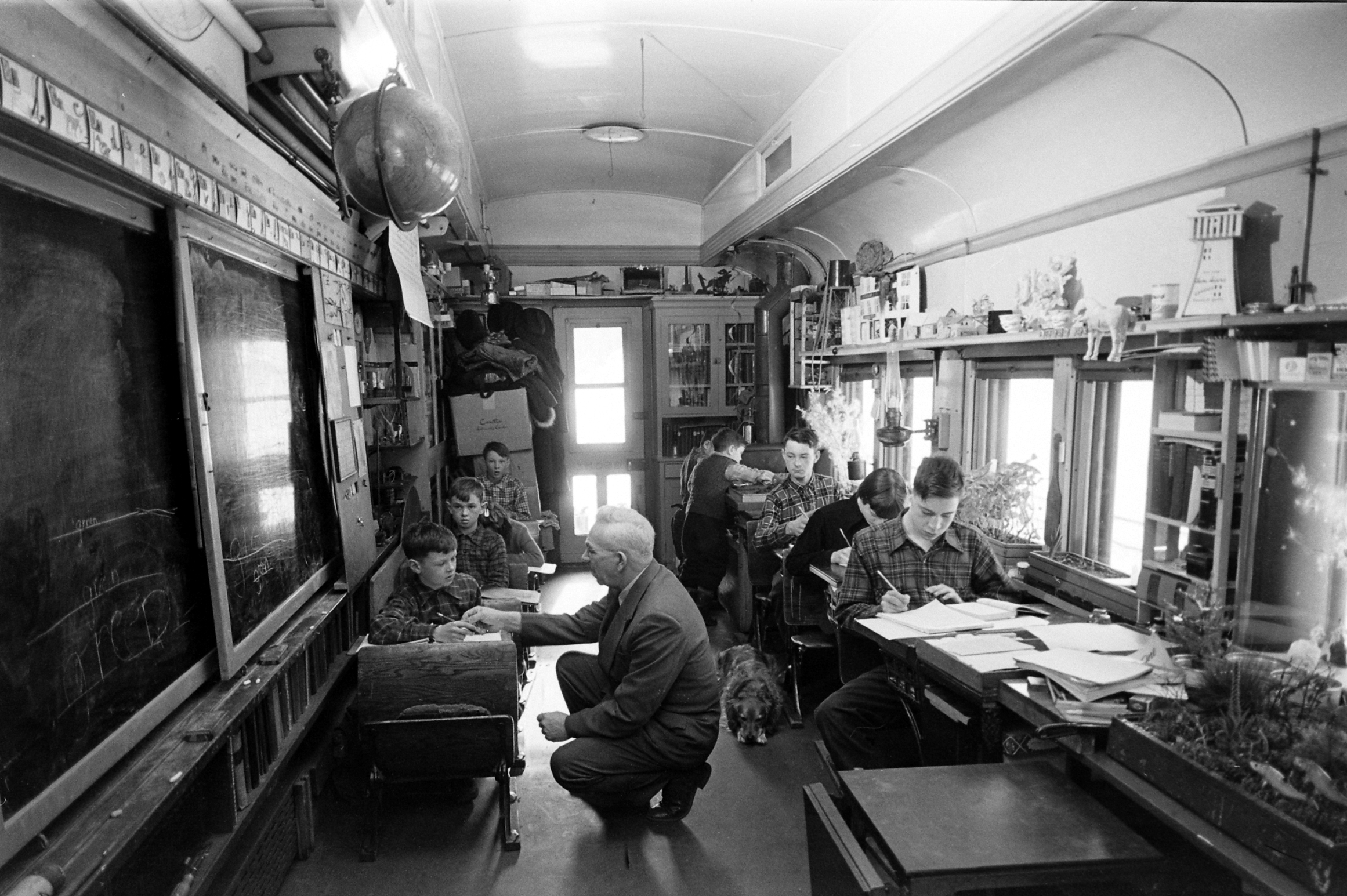