Behind the Picture: ‘Dewey Defeats Truman’

Triumph. That’s the look on President Harry Truman’s face. Sheer, unadulterated triumph. In fact, of the countless politics-related photographs made over, say, the past century, one would be hard-pressed to point to a more famous image than W. Eugene Smith‘s shot of an ebullient Truman holding aloft a copy of the Chicago Tribune emblazoned with the now-legendary (erroneous) headline: DEWEY DEFEATS TRUMAN.

The reason for the picture’s immortality? It’s not the headline itself although that titanic error is, in its own way, rather marvelous—the screw-up was the result of an early press time and a poor prediction. Instead, the picture endures because of the look of unabashed, in-your-face delight in Truman’s eyes.

First, a brief discussion of the ’48 election itself. In what is generally regarded as the greatest upset in American political history, Truman beat the heavily-favored Republican governor of New York, Thomas Dewey, by a substantial Electoral College margin, 303 to 189, but by fewer than three million votes in the popular vote. (The right-wing, stridently segregationist “Dixiecrat” nominee, Strom Thurmond, won four states—Alabama, Mississippi, Louisiana and his home state of South Carolina—and 39 electoral votes in 1948.)

A full two days after the election, the president was on his way back to Washington from his home in Independence, Mo., when his train stopped in St. Louis. There, someone handed Truman a two-day-old copy of the Tribune. (One version has a staffer serendipitously finding the paper under a seat in the station.)

Maybe Truman had already heard about the Republican-leaning Trib‘s embarrassing snafu, but he had not yet held a copy in his hands. Perhaps this was the first time he had any inkling of how huge and how hugely mistaken the headline actually was. However it shook out, in Smith’s photograph of that priceless moment, Truman’s elation upon coming face to face with the dead-wrong assertion of his defeat is positively palpable.

Seeing the image today, in the world of the 24/7 news cycle, it’s hard to believe that the photograph was not made on election night. After all, in an age of 24/7 news, when more and more media consumers get their breaking news via tweets and friends’ Facebook posts, two days can seem like a lifetime.

But the thrill evident in the face of the man holding that paper remains as indelible today as when it was captured all those years ago. It’s a defining image of more than a politician. The picture captures the feeling of sweet, improbable victory for a person who had been counted out too soon. 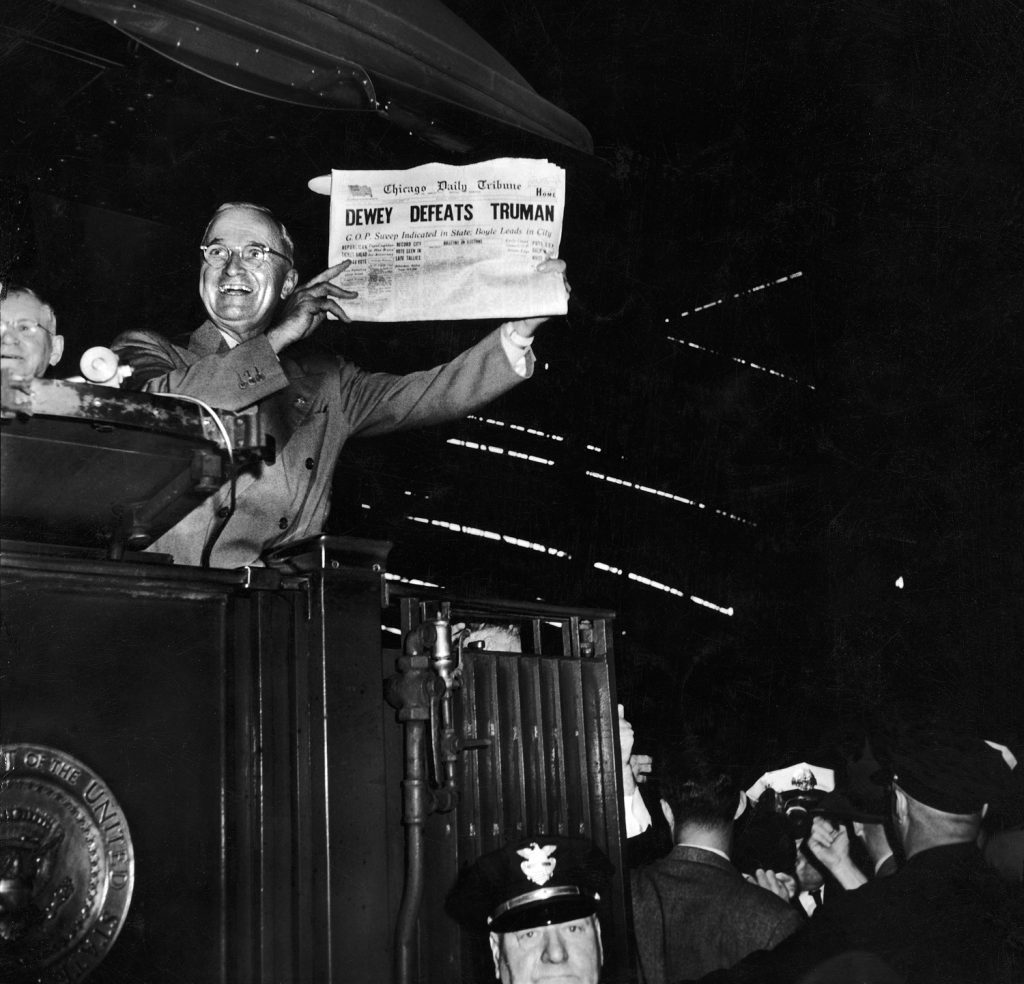