The Right Stuff: When America Met the Mercury Astronauts

America’s first venture into space was a feat of scientific ingenuity and also one of human daring. It is no wonder that, in the early days of the Space Race, the men who piloted those mighty rocketships were accorded a dose of stardom, even before they ascended toward the stars.

No other publication covered the early days of the Space Race with as much unfettered access to the astronauts and their families as LIFE, and in its Sept. 14, 1959, issue the editors featured the “fly boys” selected for Project Mercury in a major cover story. Thus did American begin its fascination with the men knows as the Mercury 7: Alan Shepard, John Glenn, Donald Slayton, Gus Grissom, Wally Schirra, Gordon Cooper and Scott Carpenter.

LIFE’s coverage of the Mercury 7 plays a central role in The Right Stuff, a new television series based on the Tom Wolfe novel. (The book was also the basis for a 1983 movie of the same name), This eight-episode series about America’s first astronauts debuts on Disney+ on October 9.

In the original magazine story, LIFE’s editors announced, “We begin this week to report the personal side of a story which we know will live on in history as long as there are men to record it. It is the story of the Astronauts the supremely dramatic story of man’s first efforts to leave his native Earth.”

In the introduction to the multi-part feature itself, meanwhile, the momentous nature of the task ahead was discussed in tones that ranged from the near-poetic to the downright blunt:

Some fine early morning before another summer has come, one man chosen from the calmly intent seven … will embark on the greatest adventure man has ever dared to take. Dressed in an all-covering suit to protect him from explosive changes in pressure, strapped into a form-fitting couch to cushion him against the crushing forces of acceleration, surrounded in his tiny chamber by all manner of instruments designed to bring him safely home, he will catapult upward at the head of a rocket for more than 100 miles and then plunge down into the Atlantic Ocean. If he survives, he will be come the heroic symbol of a historic triumph; he will be the first American, perhaps the first man, to be rocketed into the dark stillness of space. If he does not survive, one of his six remaining comrades will go next.

The astronauts are all in their 30s. All are military pilots with experience in engineering and in testing new airplanes. One member of the NASA board which chose them called the Astronauts “premium individuals picked for an unconventional task.” In less clinical terms they are the best of a very good lot, a bright, balanced, splendidly conditioned first team, willing eager, in fact to undertake an assignment most men would find unthinkable.

The seven were introduced to America on April 9, 1959. Here, LIFE.com offers a gallery of photos taken in the early days of Project Mercury. The pictures were made by long-time LIFE photographer Ralph Morse—a man who spent so much time with the Mercury Seven (and, ultimately, with the Gemini and Apollo crews, as well) that John Glenn himself fondly dubbed Morse “the eighth astronaut.” 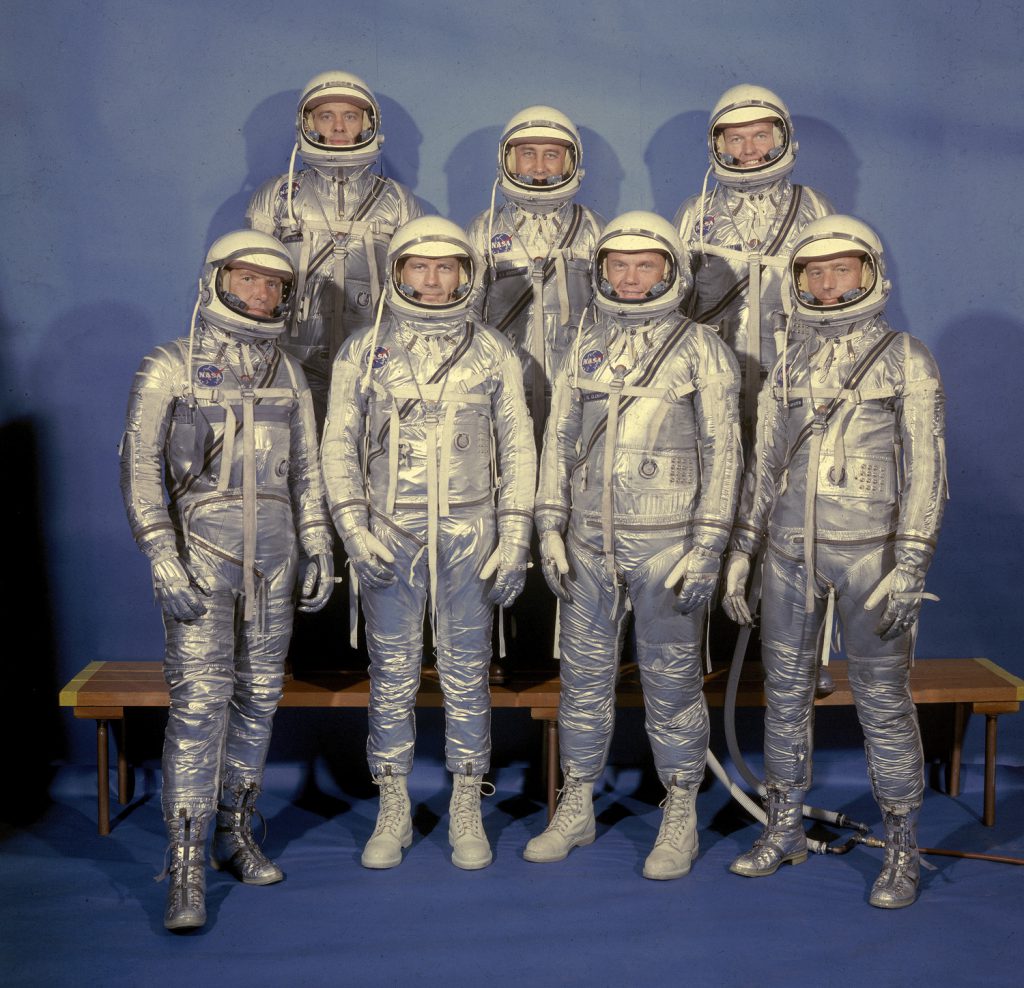 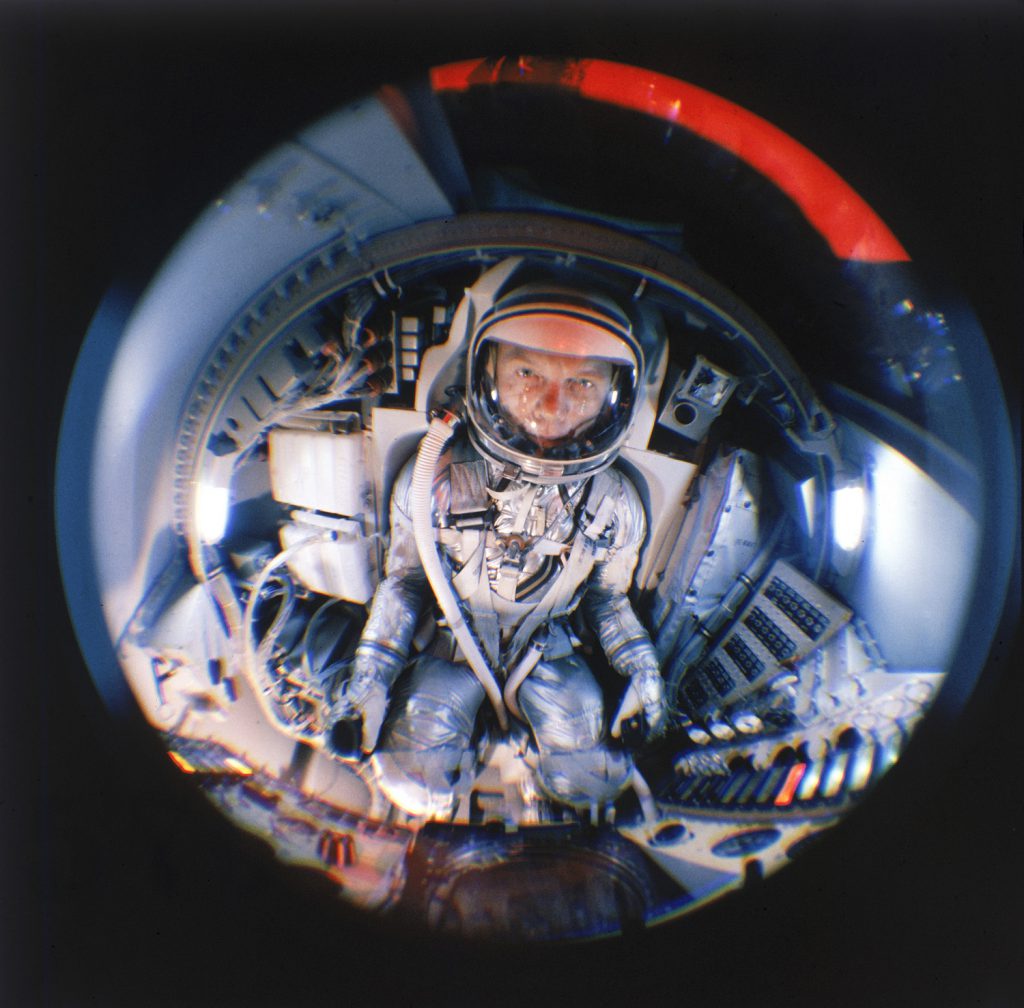 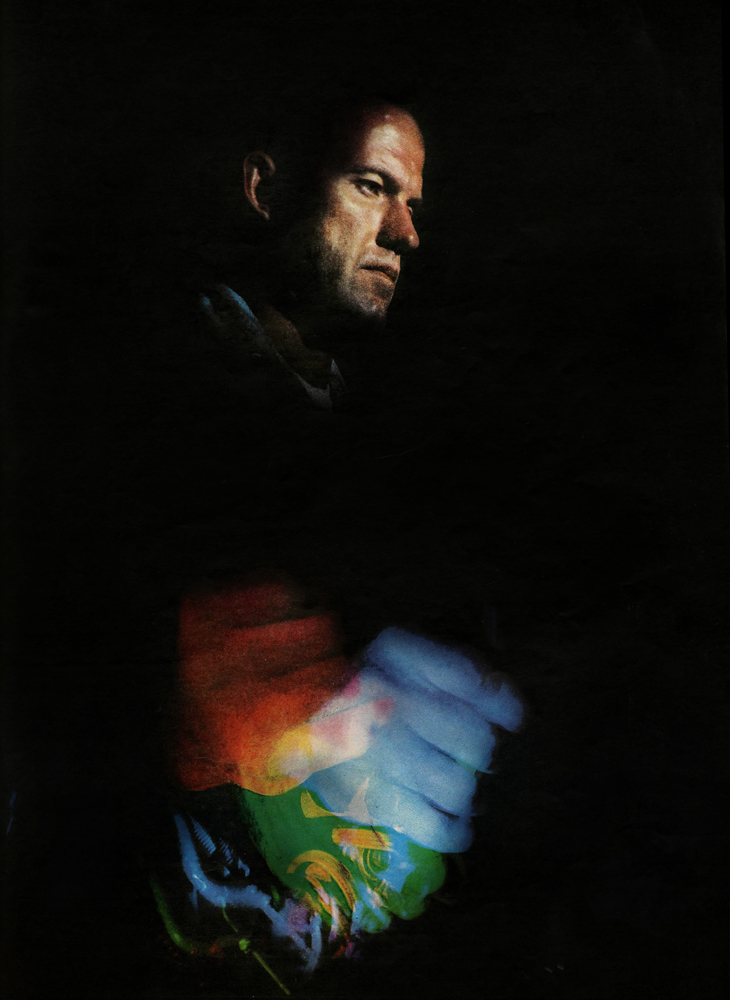 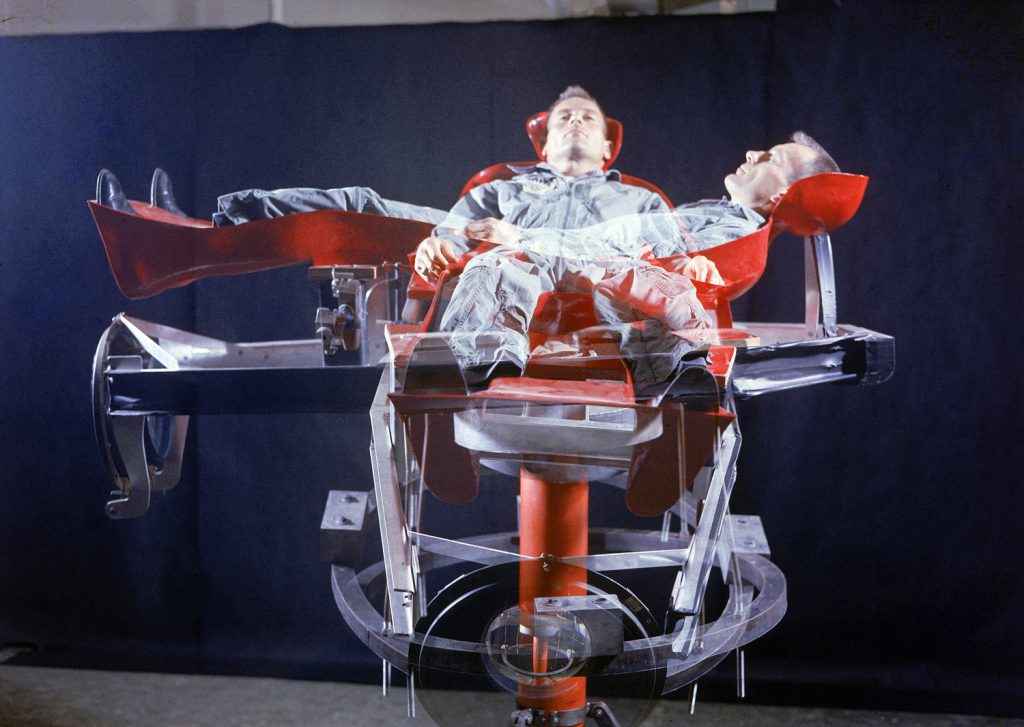 Astronaut Donald “Deke” Slayton in an “orbital attitude simulator” training device, 1959. In 1975, at 51 years old, Maj. Slayton became the oldest person to fly into space (until his Mercury colleague John Glenn flew aboard the Discovery space shuttle at age 77 in 1998) when he served as the docking module pilot of the 1975 Apollo-Soyuz Test Project. 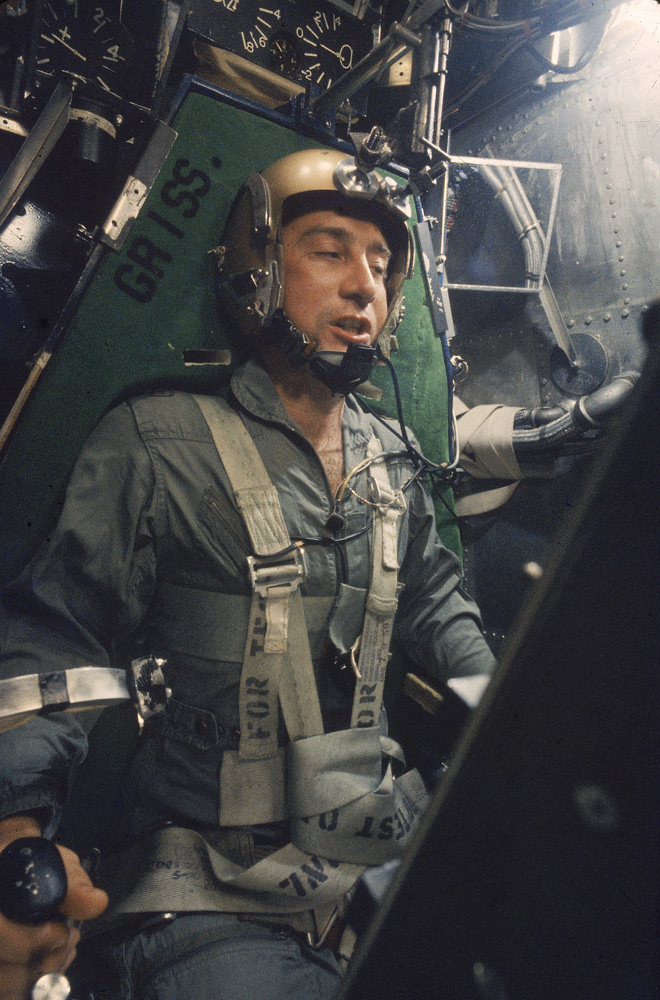 Astronaut Virgil “Gus” Grissom strapped into a centrifuge during a simulated space flight, 1959. Lieutenant Col. Grissom was killed, along with fellow astronauts Roger Chaffee and Ed White, in a launch pad fire while training for the Apollo 1 mission in January 1967. 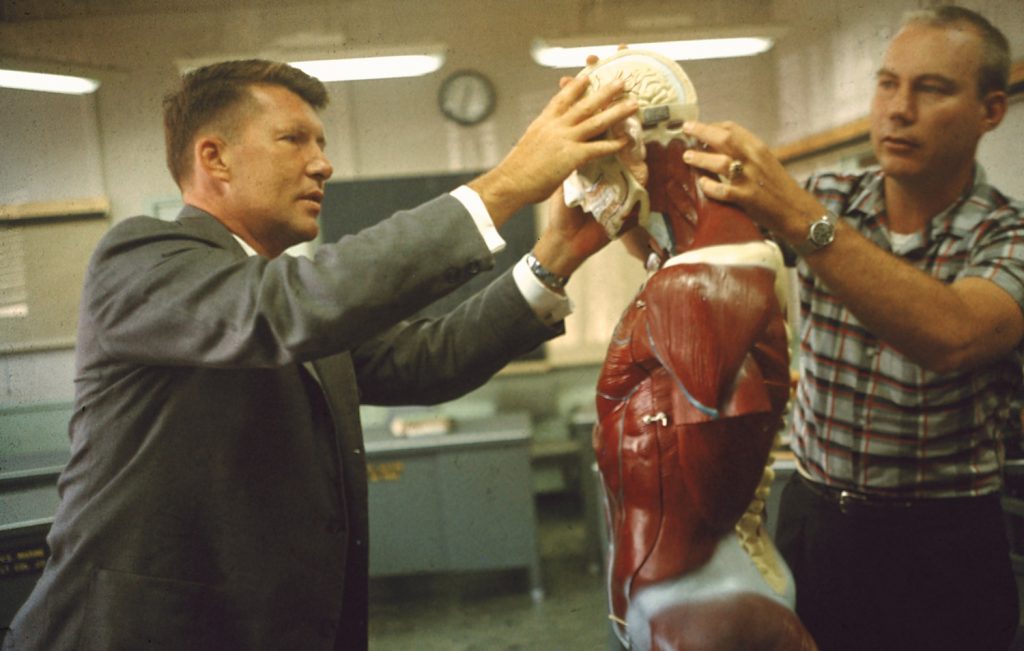 Air Force medical officer Dr. William Douglas gave a physiology lesson to Project Mercury astronaut Walter Schirra, 1959. Schirra was the only person to fly in all three of the earliest space programs—Mercury, Gemini and Apollo—and eventually logged more than 295 hours in space. 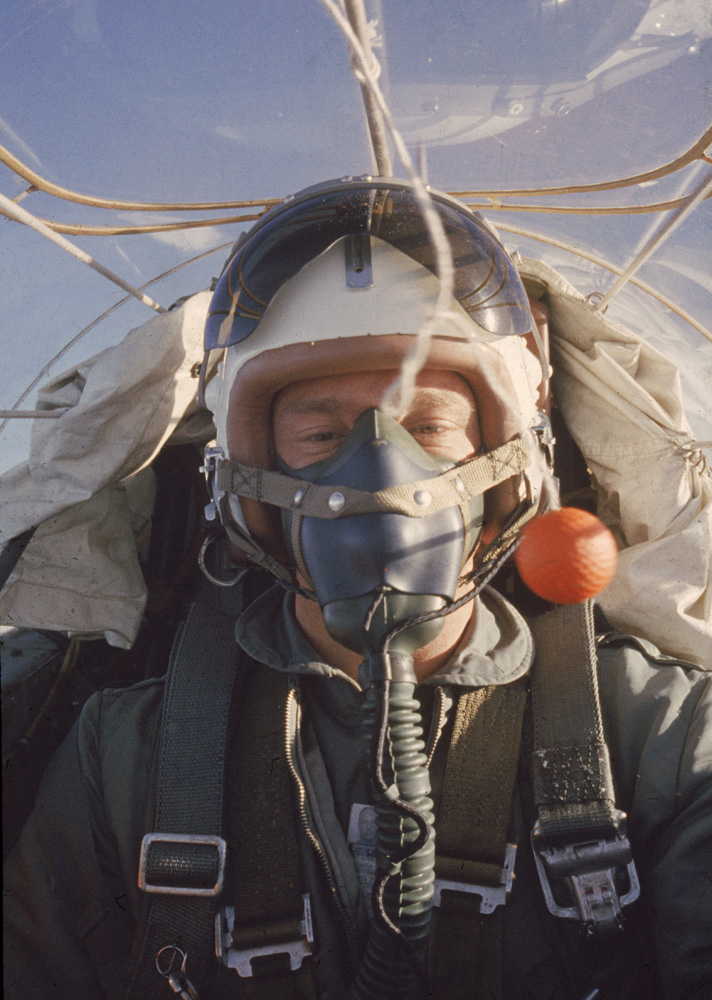 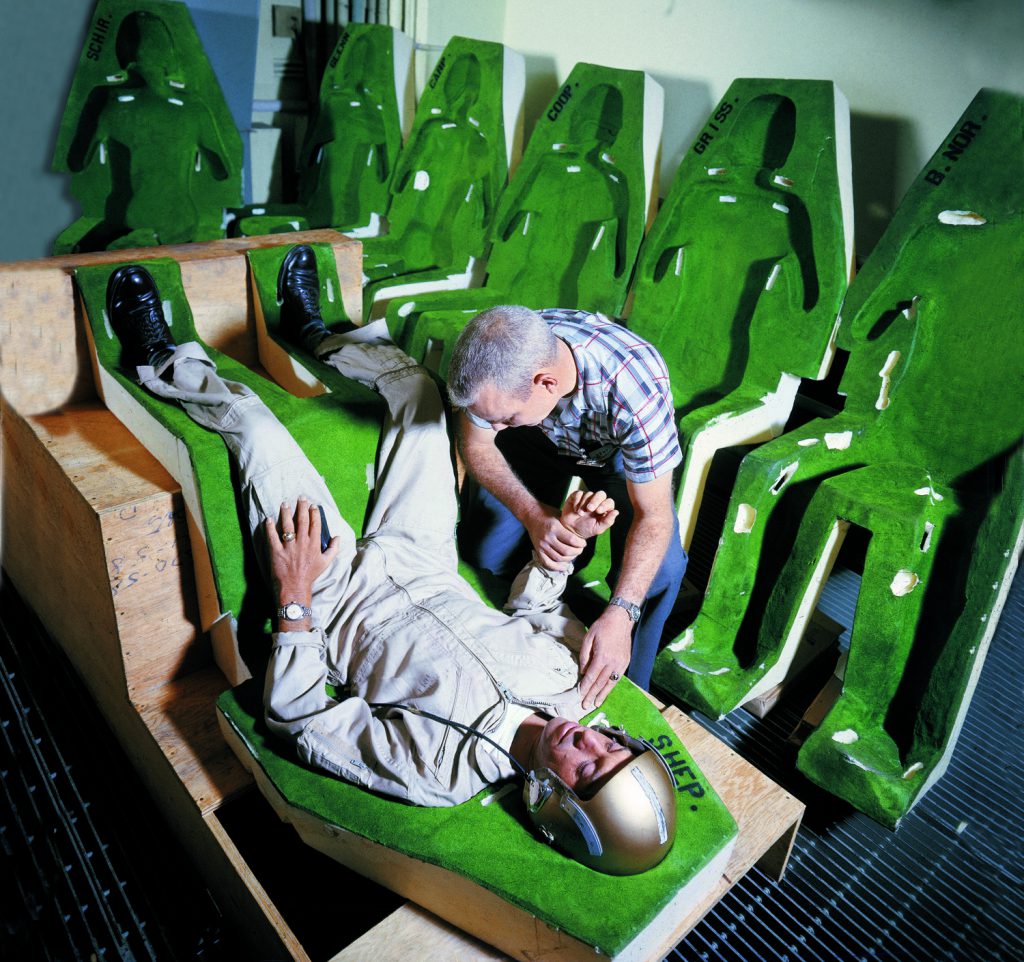 Mercury Project astronaut Alan Shepard checked the fit of his individually molded couch, used for training as well as during flight. 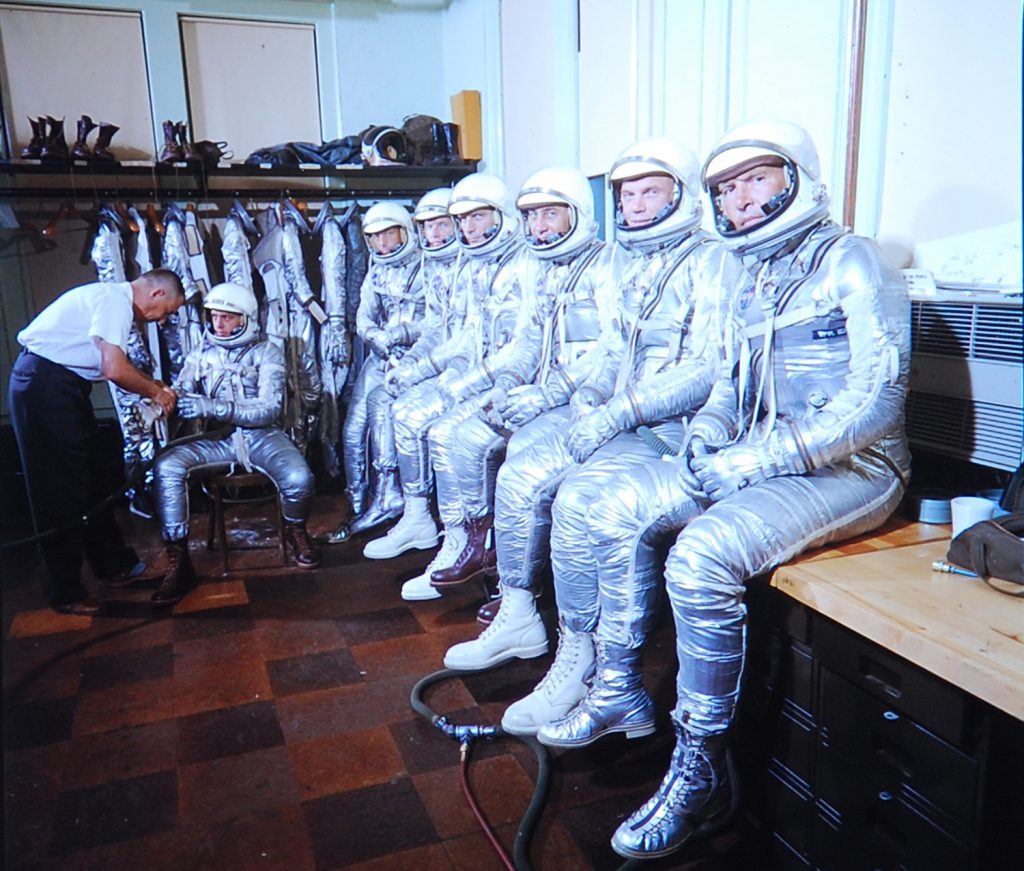