Mother Teresa in Beirut in 1982, with one of the 37 mentally handicapped children who were being moved from a hospital that had been bombed to a Missionaries of Charity school there.

The following is from the introduction of LIFE’s new special tribute issue Mother Teresa: Her Life and Her Mission. It’s out on the 25th anniversary of her passing and is available at newsstands and online:

In living memory, she is a wizened, weathered figure draped in a simple white sari trimmed in blue, so stooped from long years of hard labor that she seemed smaller than her listed height of five feet. But this was no “little old lady,” no frail object of patronizing sympathy. Far from it. She was rugged, tough as nails, and to the end of her 87 profoundly consequential years on earth in 1997 bore an undimmed glow. That rutted olive-toned face, etched with the sorrows and cares of a suffering humanity, would illuminate in a mesmerizing smile, radiating a spirit, passion, and magnetism that moved nations and generations.

She was, of course, Mother Teresa—winner of the Nobel Prize for Peace, canonized Saint Teresa of Kolkata in 2016. A Roman Catholic nun, she founded the Missionaries of Charity, a religious order that has served the desperately impoverished, the sick, and the dying, among other marginalized groups, since 1950. Twenty-five years after Mother Teresa’s death, the order numbers nearly 5,000 missionary sisters spread over more than 600 locations in more than 130 countries, not to mention an army of priests and lay volunteers who pitch in around the world. “Thanks to her work with the ‘poorest of the poor,’ as she put it,” notes Father James Martin, S.C., a Jesuit priest who collaborated with the Missionaries of Charity in Jamaica, “Mother Teresa became a kind of shorthand for Christian charity in the 20th century.”

She was an unlikely international icon—an overused term, perhaps, but surely apt in her case. Born Agnes Bojaxhiu in 1910 to a bourgeois Albanian businessman and his wife in Skopje, now the capital of North Macedonia, she was bright and pious—like her mother, from whom she learned generosity to the less fortunate—but seemingly an otherwise unremarkable girl. Early on, though, Agnes did feel an unusually strong call to religious service, rooted in deep devotion to Jesus Christ, along with a fascination with missionary work in India that intensified in adolescence. At 18, after some anguished deliberation, she joined the Loreto order, Dublin-based nuns with a team of sisters working in Kolkata (the city then called Calcutta). Taking the name Teresa, she bravely left her beloved home and family for good.

For two decades Teresa taught school while bringing supplies and solace to Kolkata’s slums, working in total obscurity—indeed, you’d be hard-pressed to find a photograph of her taken in the 1930s or ’40s. The story might well have ended there. But in September 1946 she experienced a strange epiphany—a direct call from Jesus, she said—to start an entirely new religious order, one that would minister to society’s forgotten men, women, and children, the abject, the diseased, those living and dying in the streets while others looked away.

With relentless zeal, Mother Teresa pressed the church hierarchy—and finally won approval to launch her order, known as the Missionaries of Charity. She required of her sisters only what she demanded of herself, a vow “to devote themselves out of abnegation to the care of the needy who, crushed by want and destitution, live in conditions unworthy of human dignity.” The expressed purpose of the order was to serve the poor by living among them, sharing in their experience, treating each tortured soul with kindness—and, even in the direst circumstances, exuding good cheer. “Let every action of mine,” she often said, “be something beautiful for God.”

To a privileged Westerner who recoils at a dirty public restroom or a homeless person on the subway, Mother Teresa’s idea of beauty might be unimaginable. She and her sisters got right down in it, wiping up excrement, cleaning maggots out of indigents’ open sores, caressing broken bodies as they took their last breaths. In the early days, the sisters would roam the city begging for money and food, for themselves as well as their wretched clientele. “There were times during the first three or four months,” Navin Chawla, one of Mother Teresa’s biographers told Time, “when she’d be humiliated, and tears would be streaming down her cheeks.”

But the fervent girl from Skopje kept at it, attracting followers and patrons, growing her order exponentially. Mother Teresa started hospices so the terminally ill could die “a beautiful death”; with little, if any, regard for their own safety and health, she and her missionaries cared for the blind and disabled, orphaned children and abandoned aged, alcoholics, drug addicts, and  prostitutes looking to turn their lives around. Over the decades, she rushed to aid victims of epidemics, famines, and disasters, both natural and manmade, all over the world—including regions reduced to rubble by war.

What makes Mother Teresa’s accomplishments all the more remarkable is that, while harboring a fierce love of Jesus, she spent the latter half of her life wondering if those feelings were unrequited. Private writings—published after her death in Come Be My Light, a 2007 book by Father Brian Kolodiejchuk, who had been assigned to make the case for Mother Teresa’s sainthood—revealed a persistent sense that God had abandoned her. And yet she never wavered from her life’s work, which at times required the skills of a diplomat, general, or CEO. “Along with her faith, Mother Teresa brought a remarkable capacity for hard work, an ability to inspire people—not just her sisters, but Christians around the world—and a great talent for organization,” says Father Martin.  “She was also no fool when it came to fundraising and enlisting people’s support, all on behalf of the poor.  She was as ‘gentle as a dove and as wise as a serpent,’ again, for the poor and the sick whom she served. And if that sounds cagey, it shouldn’t: It’s what Jesus asked of his disciples in the Gospel of Matthew.”

She drew her share of criticism. She was a hard-line religious conservative, vehemently against abortion and contraception (hardly surprising for a Catholic nun), and held extremely traditional views on the role of women. At times, she accepted donations from questionable sources, and conditions in some of her facilities were found wanting. But these are minority opinions, and Mother Teresa’s reputation remains secure. In 1985, AIDS was still very much a disease with unknown implications. Many were dying, and the illness was highly stigmatized. That year, Mother Teresa opened a 14-bed hospice for terminally ill AIDS patients in Greenwich Village. She carried on her mission through some of modern history’s most tumultuous decades, roiled by political and social upheaval, stained by cataclysmic wars both hot and cold. She was one of the culture’s few constants, her persona as unvarying as her wardrobe. And though she was constantly showered with accolades, she never lost her essential humility and humanity.

It’s tempting to imagine Mother Teresa in recent years, as the world grappled with a global health crisis, European cities were turned to rubble, and other calamities unfolded. No doubt the intrepid nun would be right in the thick of things. In an era upended by technology, would she post inspirational memes on Twitter? Earn the exalted title of influencer?

This much is clear: In the quarter century since masses of mourners watched Mother Teresa’s body borne through the streets of Kolkata, no one has come close to filling her battered, famously ill-fitting sandals.

Here is a selection of images from LIFE’s new special tribute issue, 25 years later: Mother Teresa: Her Life and Her Mission. 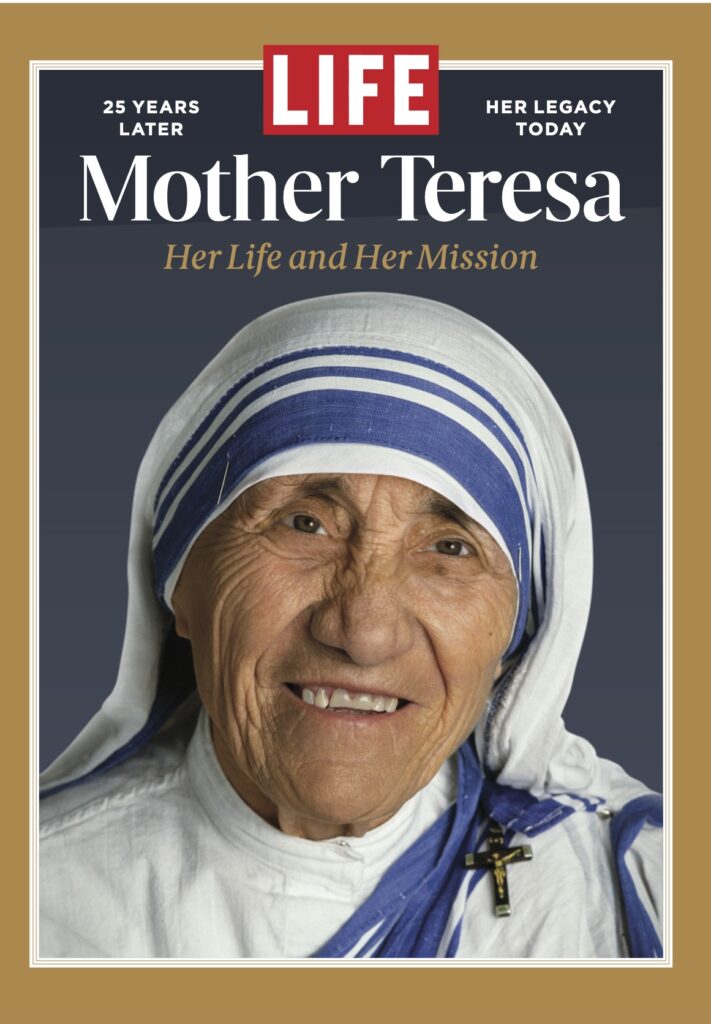 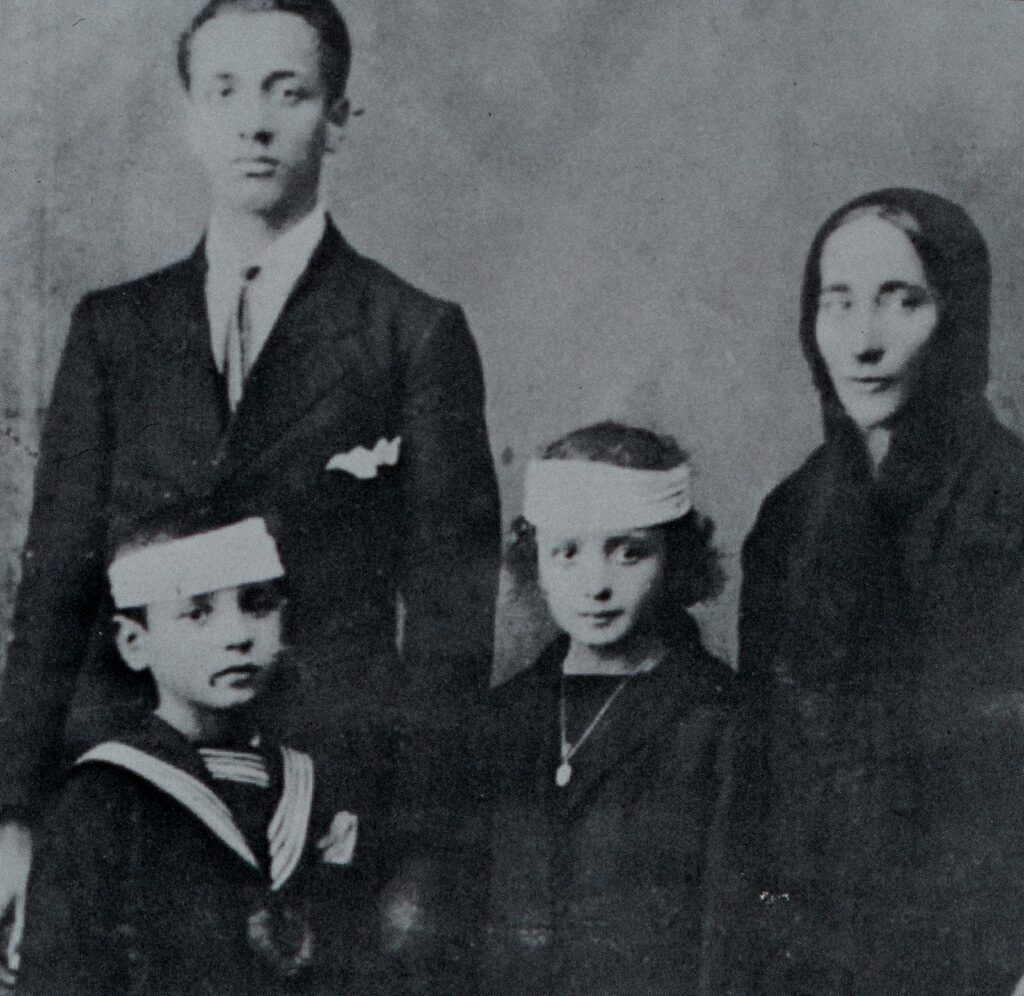 Agnes Bojaxhiu, the future Mother Teresa, circa 1920, with her parents and brother on her day of confirmation. 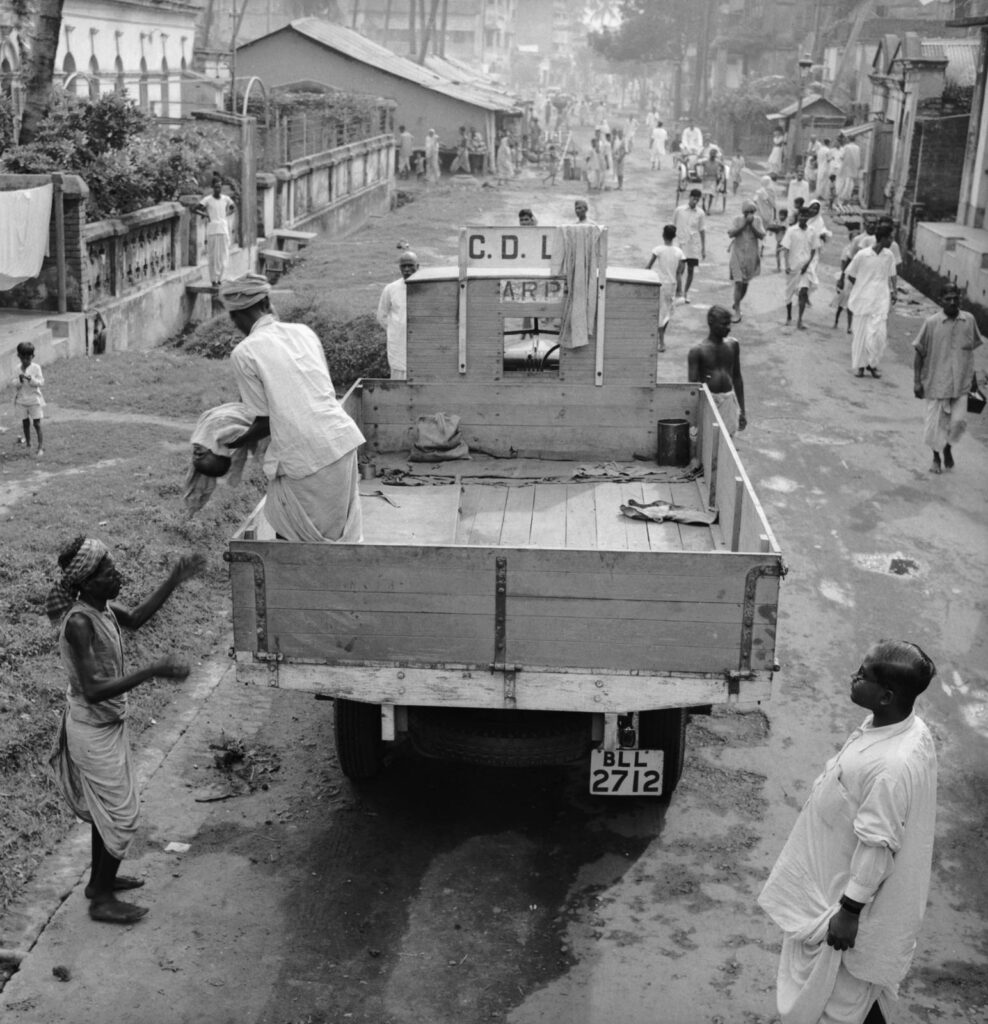 Famines had made life in Kolkata so dire in 1943 that corpse removal trucks like this one would travel the streets to remove the dead. 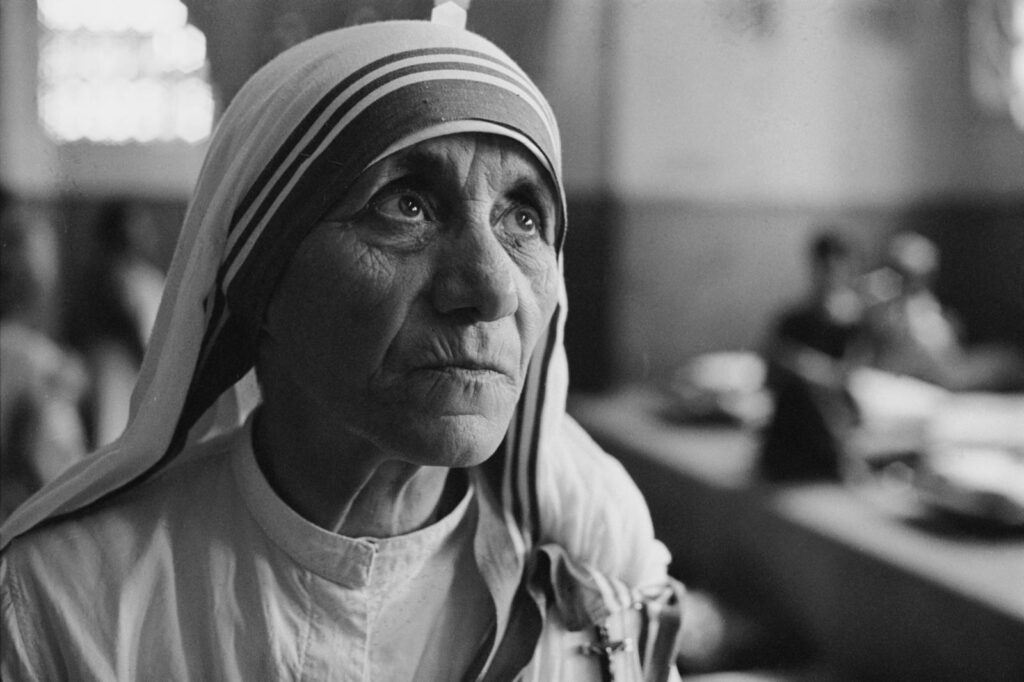 Mother Teresa, a Roman Catholic nun and founder of a religious order knows as the MIssionaries of Charity, at a hospice for the destitute and dying in Kolkata, 1969. 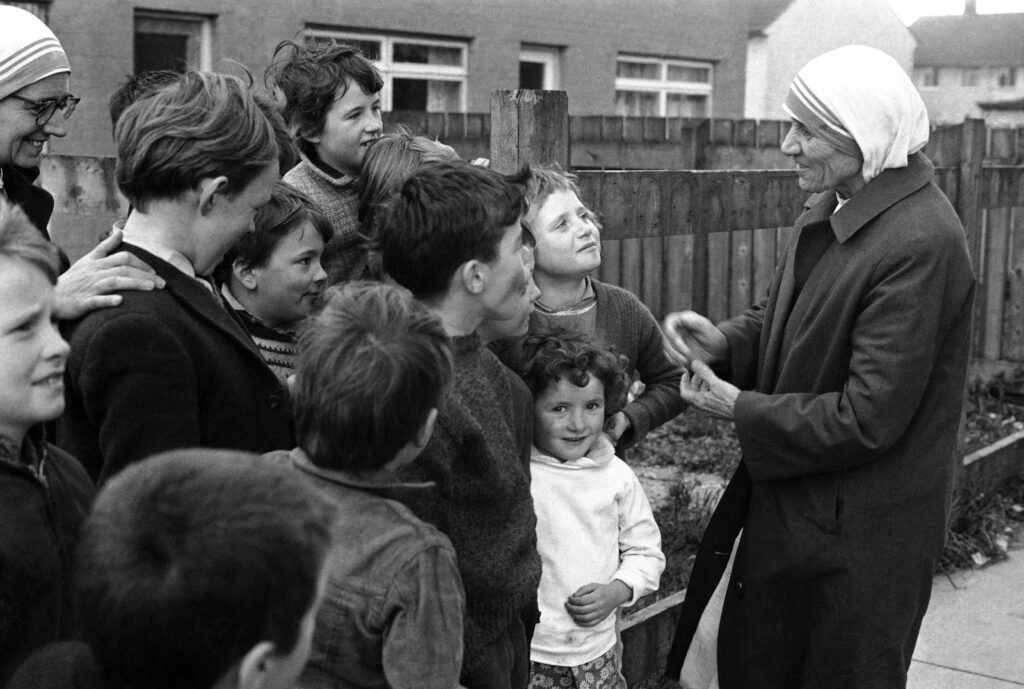 Mother Teresa in Belfast, Northern Ireland, where she had come to start a mission in 1971.

Mother Teresa in Beirut in 1982, with one of the 37 mentally handicapped children who were being moved from a hospital that had been bombed to a Missionaries of Charity school there. 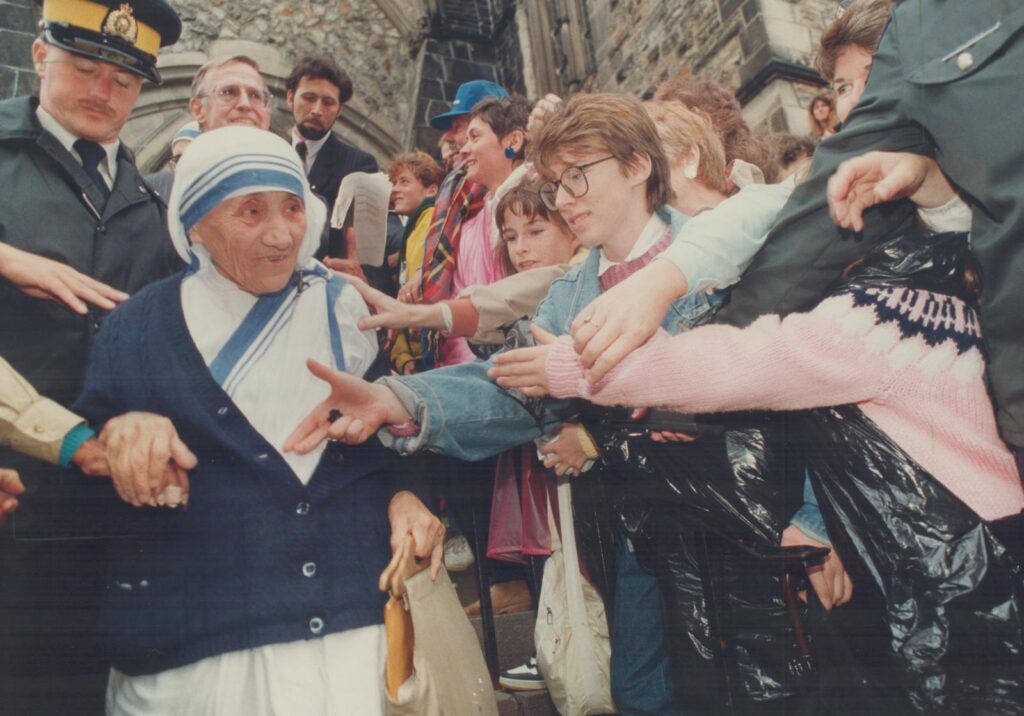 Mother Teresa at a pro-life rally in Canada, 1988. 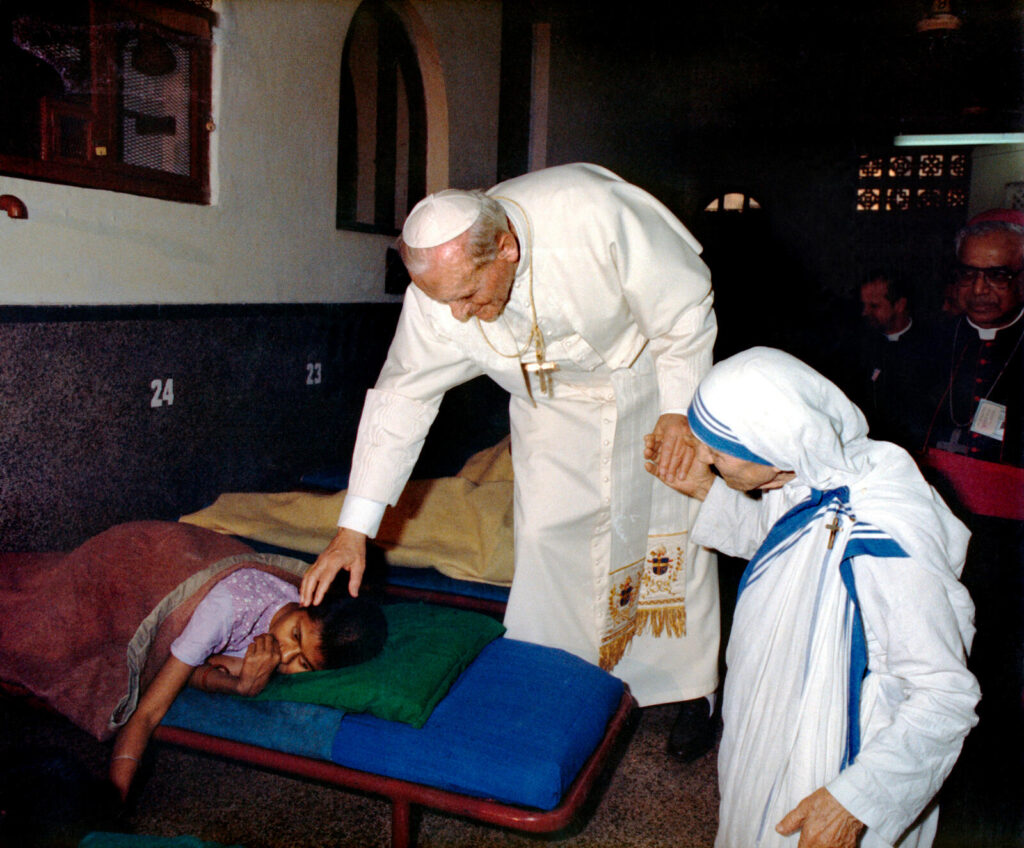 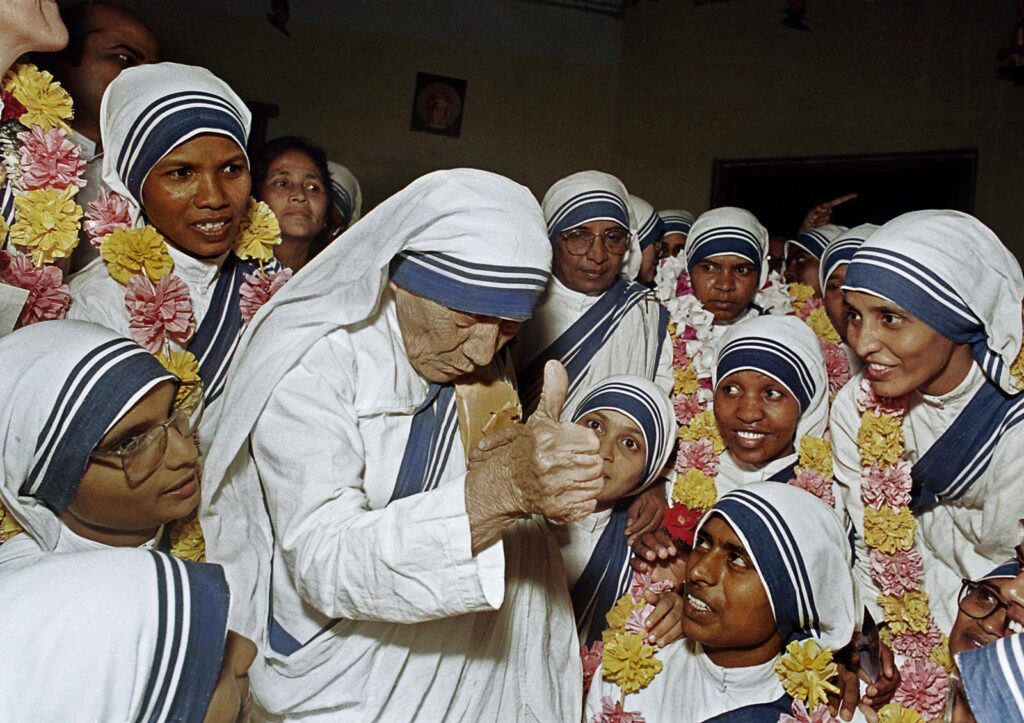 In 1995 Mother Teresa celebrated in Kolkata after nuns completed their ten years of training to join her order.