Days of Wonder: America Reacts to the Launch of Sputnik, 1957

Scientists working at the field lab of the National Bureau of Standards took measurements of Sputnik I signals.

When Sputnik 1 launched on Oct. 4, 1957 LIFE Magazine’s audience had to get used to a new reality. In a very literal sense, there was a “dazzling new sight in the heavens,” as the magazine put it, and a Soviet device passed overhead several times a day. Figuratively, things were different too. The world had entered a new age of space exploration and, much to the shock of many in the U.S., it did not begin with American glory.

In an Oct. 21 cover package about the satellite, LIFE looked at the situation from a variety of angles.

An essay from guided-missile expert C.C. Furnas took the U.S. to task for not being the first to launch a satellite, arguing that the feat would have been entirely feasible if the nation had simply buckled down. “All too frequently it has been the view of our defense establishment that research not directly related to the development of military hardware is entitled to only secondary consideration,” he wrote. “It has been regarded as a sort of extracurricular scientific pastime to be indulged in only if money is left over from the ‘really important’ things.” Such an outlook was shortsighted, he explained, especially since many of the century’s most significant military advances had been the accidental result of scientific discovery, not the other way around.

Meanwhile, in the political world, President Eisenhower attempted to reassure Americans by promising that a U.S. satellite would launch, and that it would be even better than Sputnik. And culturally, though afraid of what the news could mean for the Cold War, many Americans showed their Sputnik spunk by embracing satellite-inspired cocktails, toys and clothing, all while looking ahead to the next step in the space race.

It was this can-do attitude, more than anything, that the magazine attempted to summon in an editorial on the subject.

“Sputnik should remind us of what we ourselves have proved many times from Lexington to the Manhattan Project: that any great human accomplishment demands a consecration of will and a concentration of effort,” the magazine proclaimed. “This is as true of the liberation of men and nations as it is of the conquest of space.” 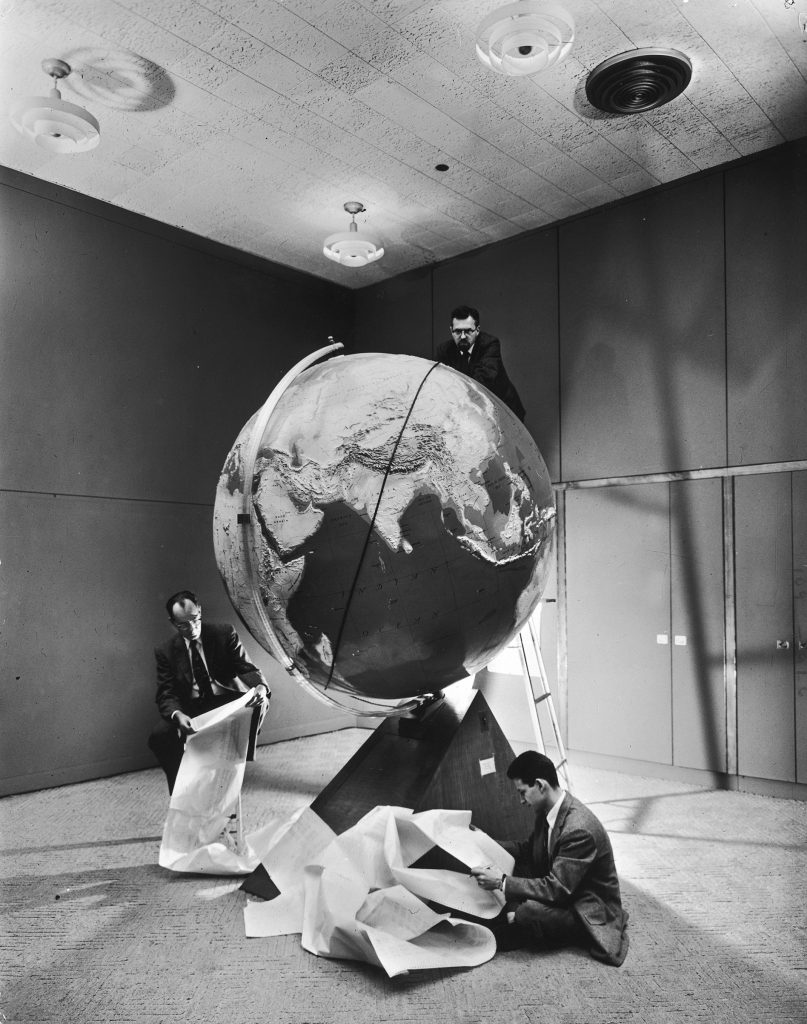 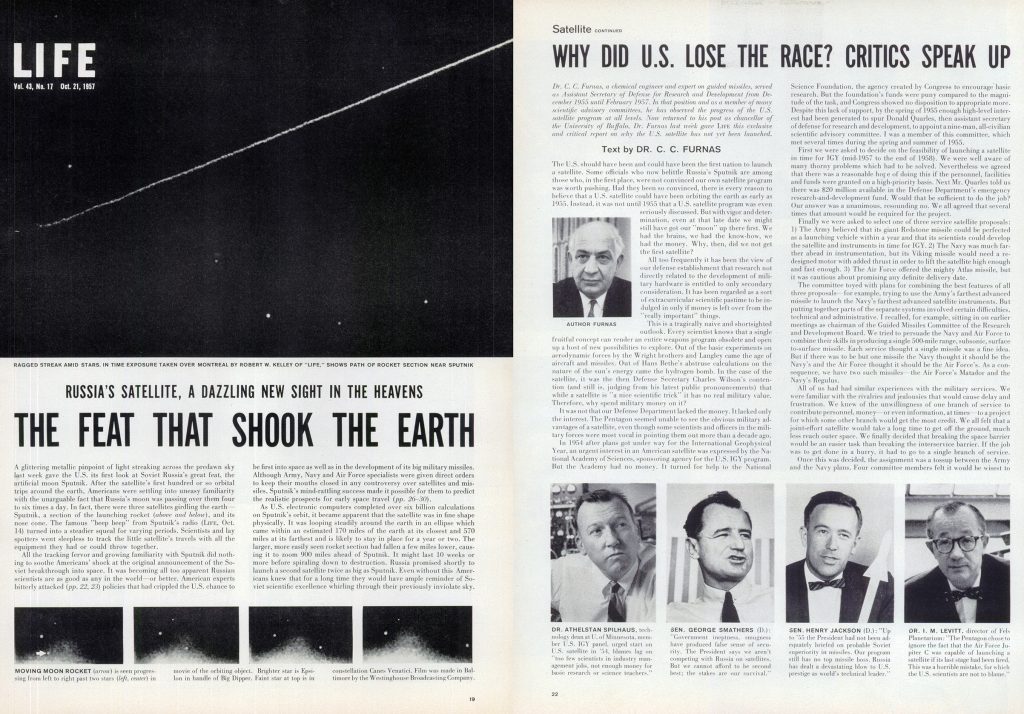 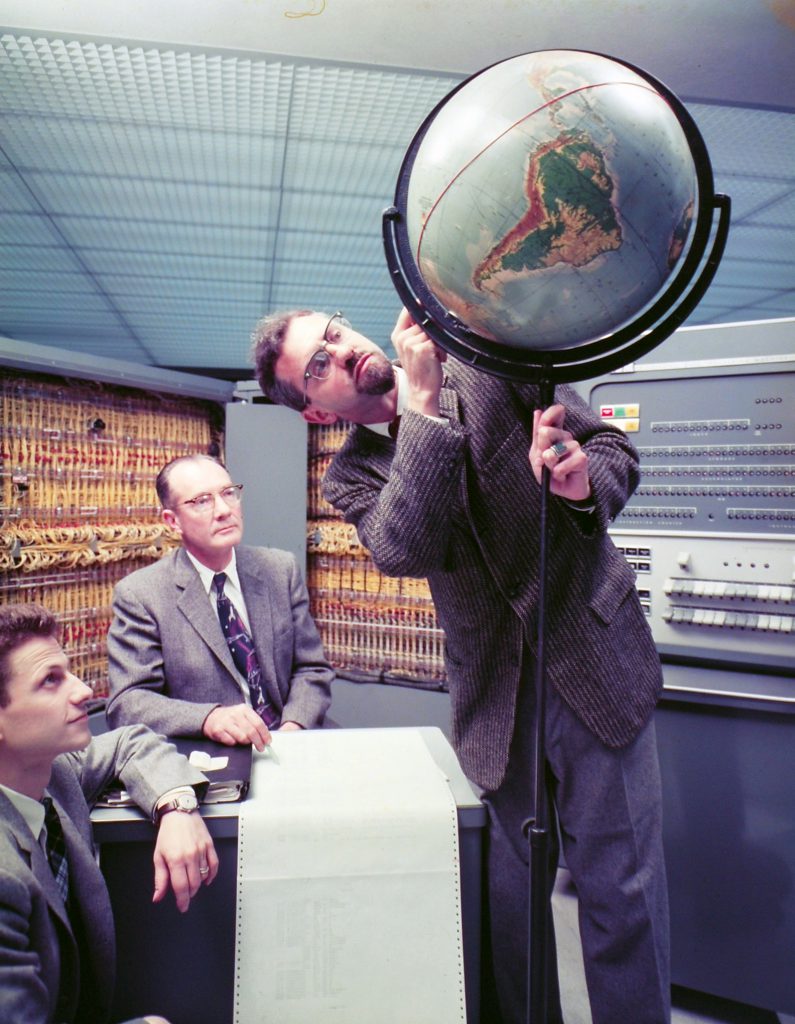 This globe was built to trace orbit of Sputnik I. 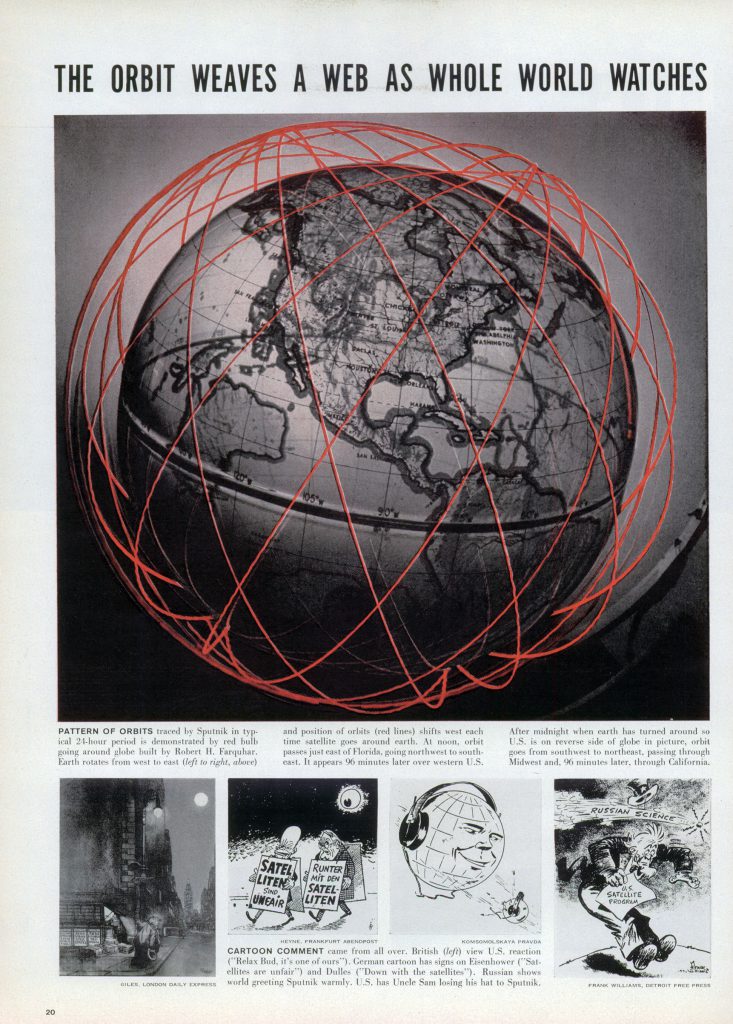 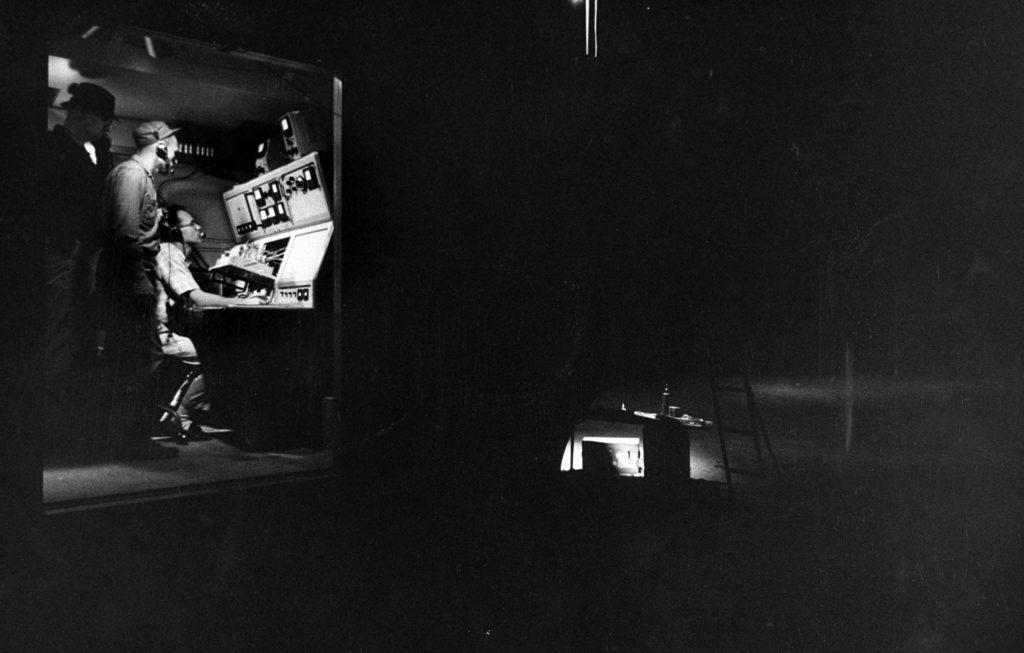 Using a tracking satellite in a van, scientists from California Institute of Technology measured its radio signal. Silhouetted at the right was a table set up on boxes to hold the men’s supper. 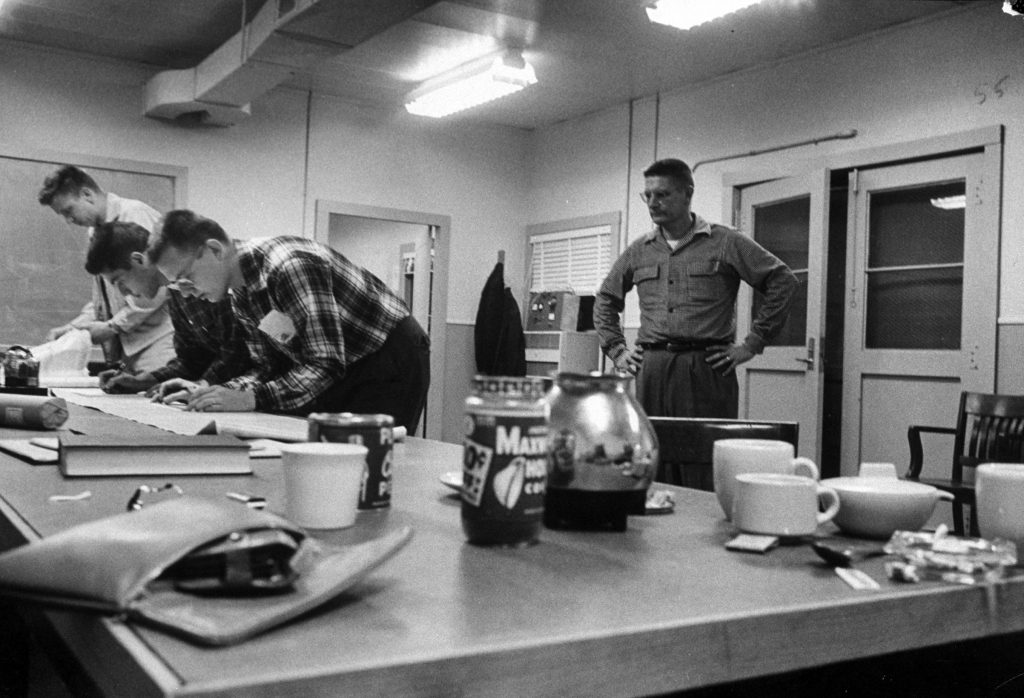 With fresh data to analyze, scientists at the Minitrack station near Washington let their coffee grow cold. 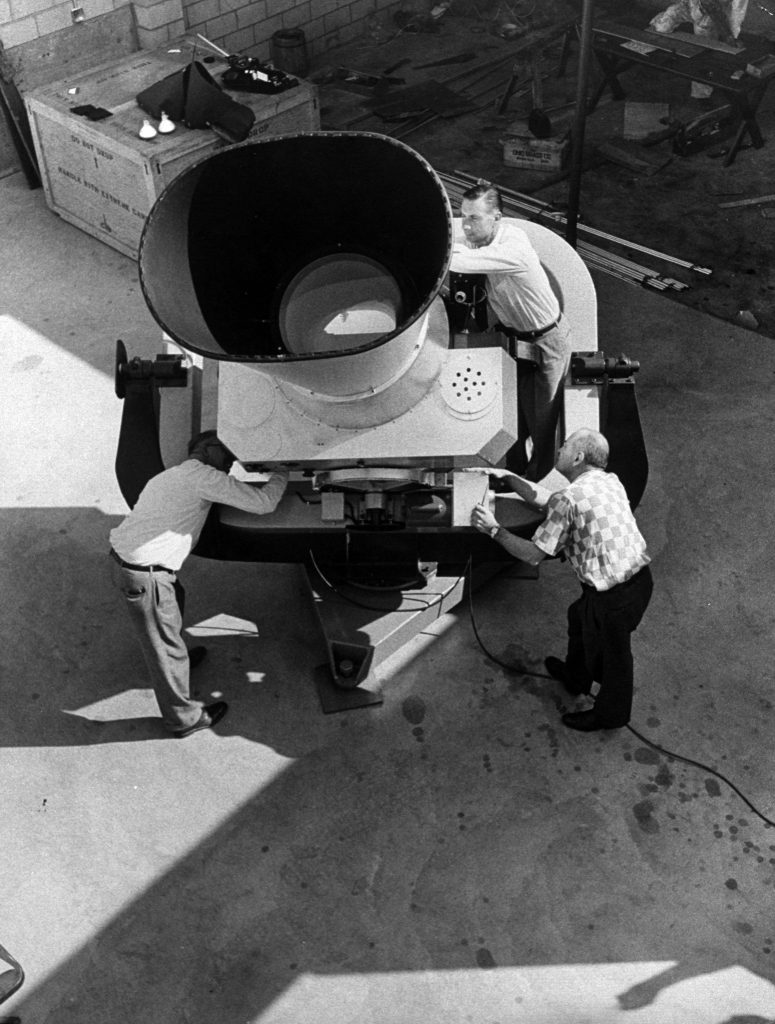 This camera was assembled in California to track Sputnik. 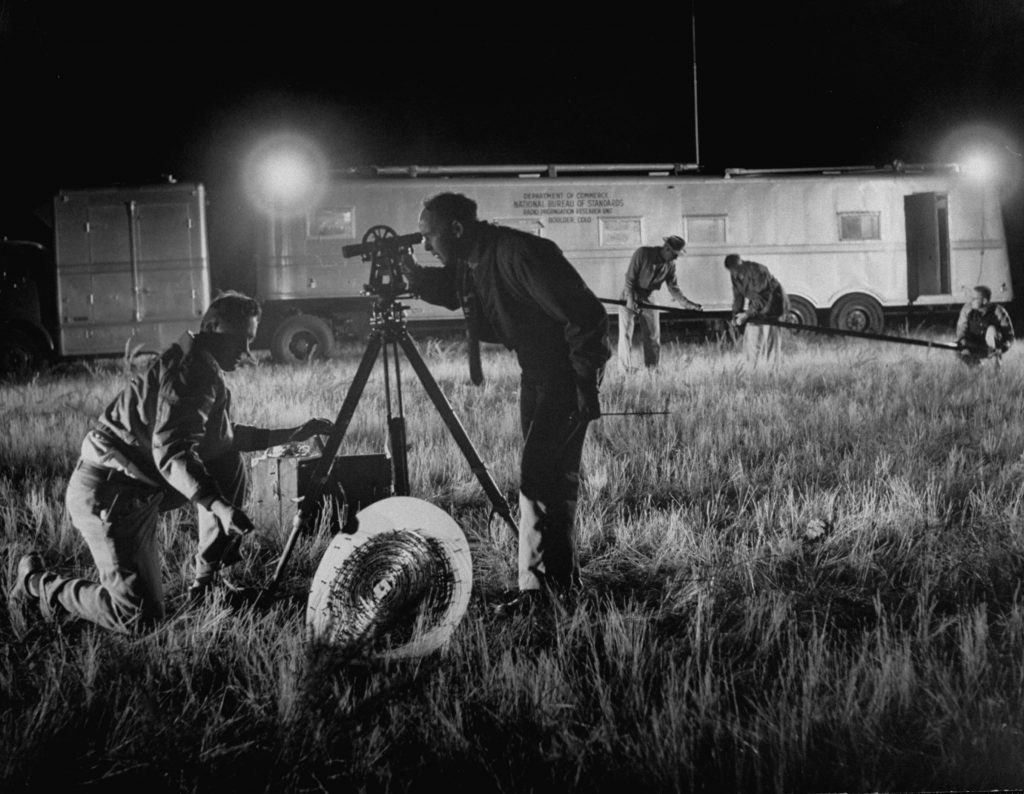 Scientists working at the field lab of the National Bureau of Standards took measurements of Sputnik I signals. 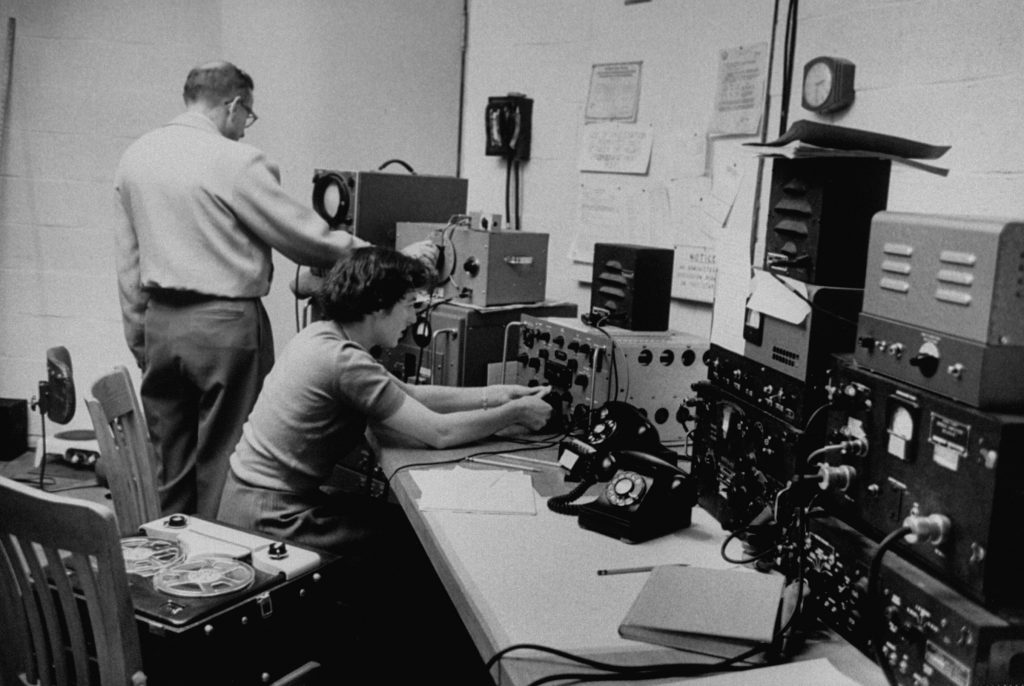 Scientists of the National Bureau of Standards Boulder Laboratory listened to signals from Sputnik I. 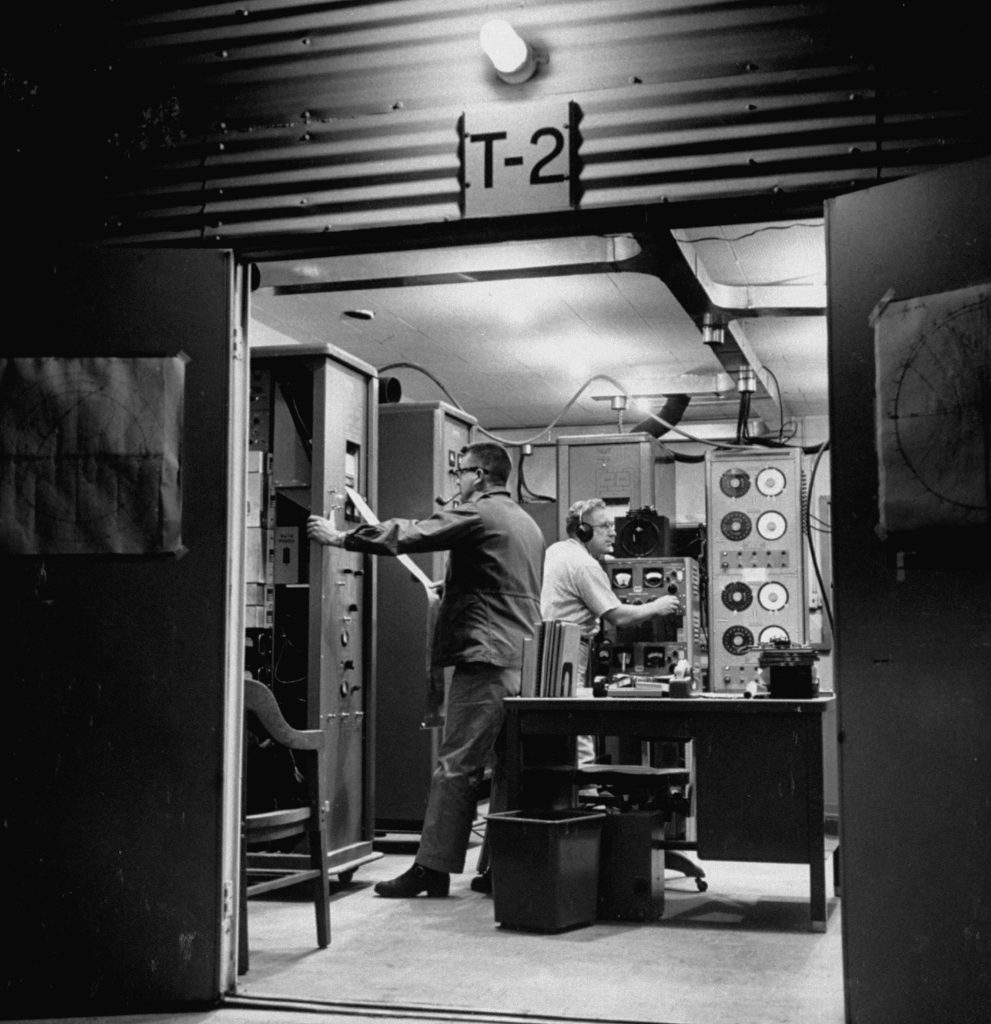 Scientists of the National Bureau of Standards Boulder Laboratory received signals from Sputnik I. 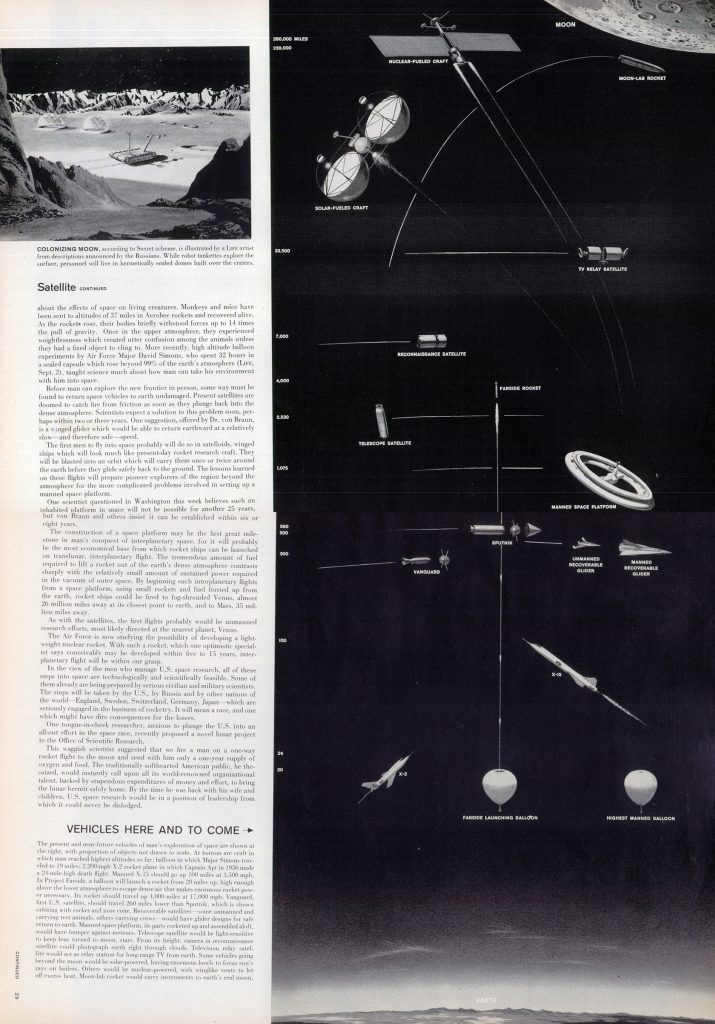 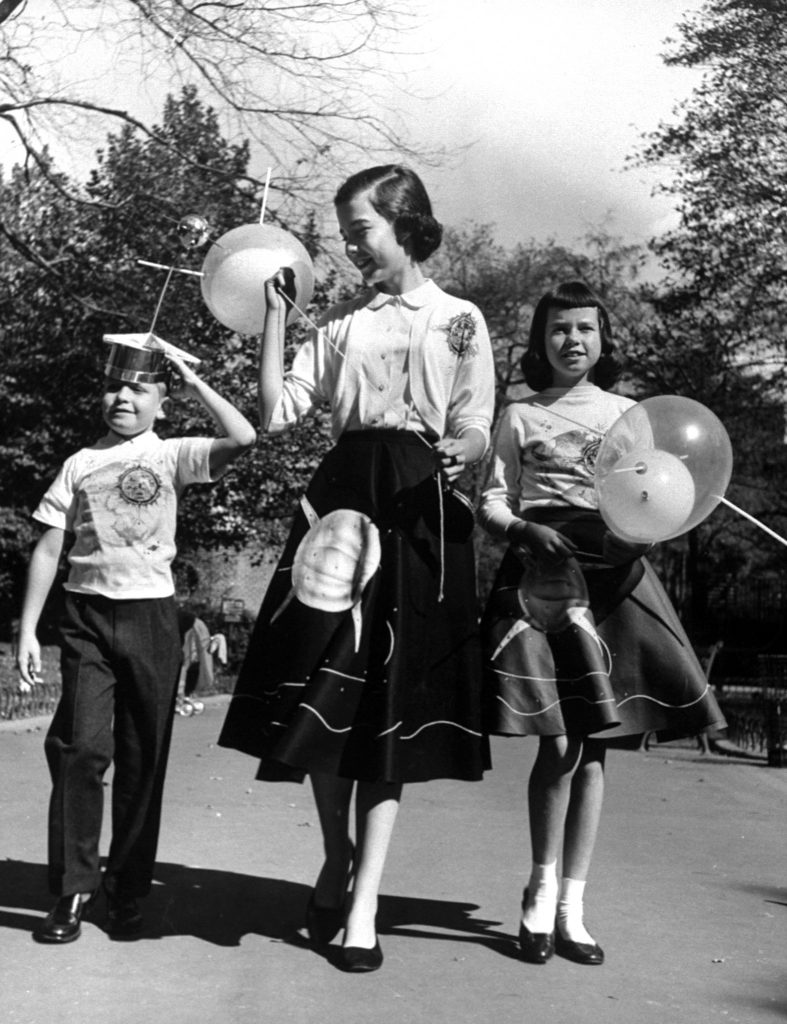 Space fashions rushed onto the market included skirts, jackets, hats, and balloons with a satellite motif. 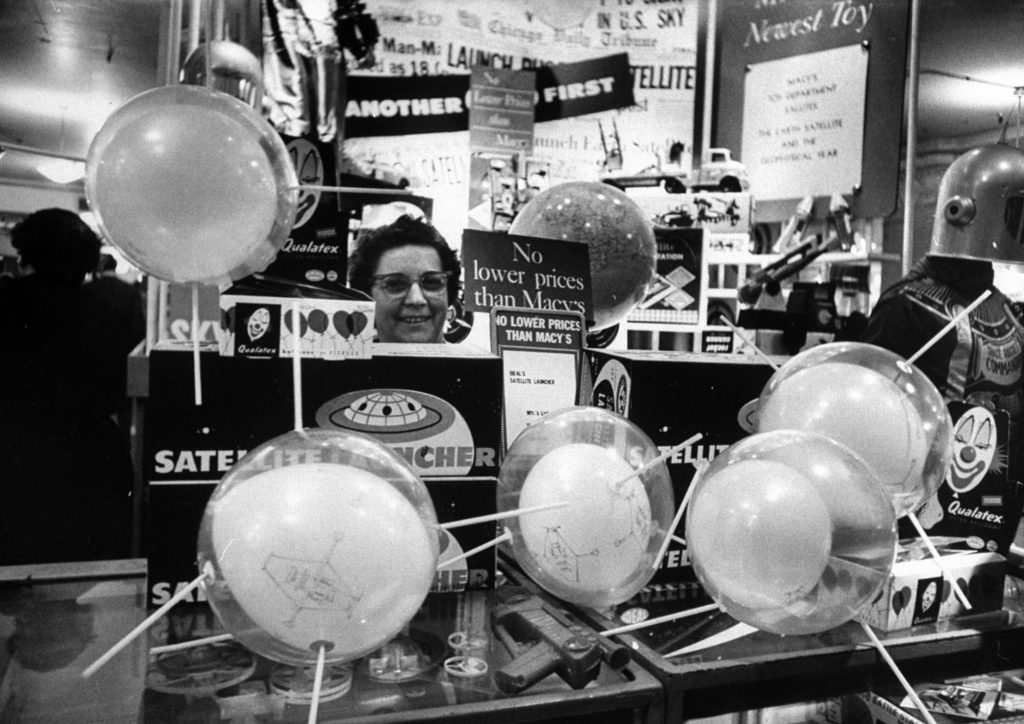 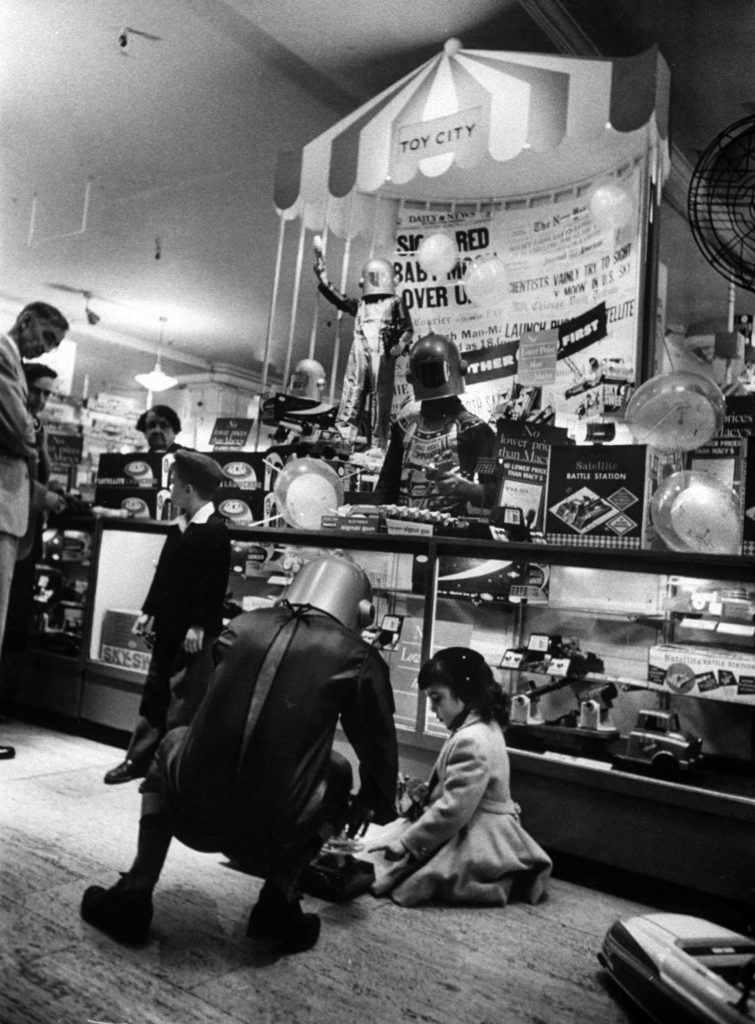 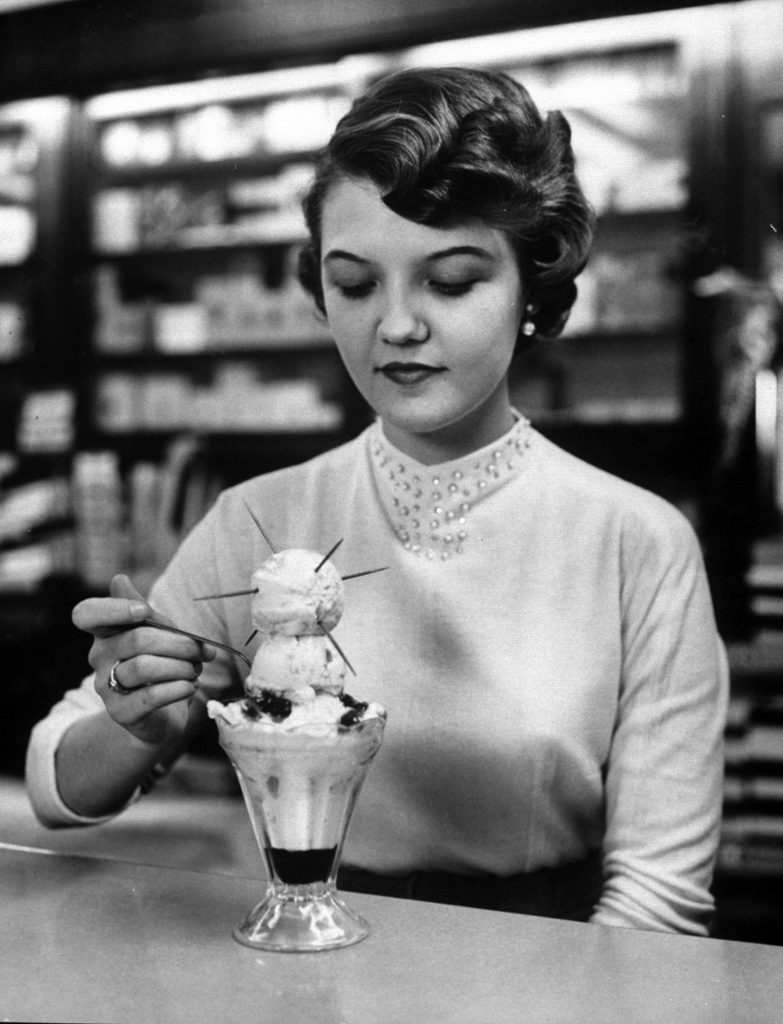 Dr. Sig Hansen wore a 50-pound aluminum and steel space suit in 1957. This room, built by the Air Force and Litton Industries of Beverly Hills, Calif., was a sealed chamber from which virtually all air was pumped out to achieve a vacuum like that encountered in space. During the test, Hansen worked with a radio tube which operated even though the usual vacuum-containing glass shell had been left off, thus permitting easy experimentation with its internal design. At the moment the picture was taken, the chamber was the equivalent of 95.5 miles altitude, the highest vacuum in which a man had yet lived.