German civilians trying to hitch a ride on a military train were turned back towards the crowded civilian area in postwar Berlin, October 1945.

The pictures that legendary LIFE photographer Leonard McCombe made at the beginning of his career in the 1940s have a resonance that hits particularly hard in 2022.

McCombe grew up in the Isle of Man and by the time he was 18, he was working as a war correspondent in Europe, shooting photos of the violence that was tearing up the continent during World War II.

Now Europe is once again at war and citizens are facing the same dire circumstances due to Russia’s invasion of Ukraine. The photos in a new exhibition of McCombe’s work at the German Consulate General in New York tell the story of the deprivation and destruction of war.

McCombe, who was inspired to take up photography as a youth when he saw a copy of LIFE, would go on to become a staff photographer at the magazine. His many memorable stories for LIFE included a report from inside the Navajo nation and an essay on the vanishing American cowboy.

McCombe, who turned to farming after the original LIFE stopped publishing in 1972, died in 2015, at age 92. He left behind folders and envelopes full of negatives from his decades in photography. His son Clark and a friend, Hannah B. Ortiz, had begun going through those old photos when McCombe was alive, prodding the reticent photographer to talk about the history behind his pictures. Clark and Ortiz’s continued work provided the source material for the new exhibition at the German Consulate.

They originally began planning the show with the idea that it would run in 2020, on the 75th anniversary of the D-Day invasion. The COVID-19 pandemic pushed the show back to 2022, with the war in Ukraine displacing citizens by the millions.

“This exhibition is less a commentary on history than a reminder of its fragility,” said Clark and Ortiz in a statement in the exhibition catalog. “Instead of a recollection of the past, it is a mirror to the present.”

Clark today works the family farm that his father started in Long Island, New York. After McCombe had traded in cameras and far-flung assignments for apples and peaches and berries, he didn’t look back. Clark said in a phone interview that although his father didn’t talk much about the specifics of what he had witnessed during World War II, he was unmistakably anti-war. Clark remembers that in the 1960s his father would say of the those advocating for the Vietnam War, “If they had seen firsthand what war was, they wouldn’t be so quick to be bombing people.”

The pictures in this exhibition capture scenes from Berlin and Nuremburg, as well as Warsaw and other parts of Poland. Clark says that when he looks at the pictures, in addition to seeing the suffering they document, he can’t help but think of his father as a young man, traversing a war-ravaged Europe and taking in all this horror.

“When I look at what he did and how he managed, I just shake my head,” he said. “I don’t know how he did it, or a lot of those guys did it.”

The exhibition runs through August 15, 2022. Here is a brief selection of McCombe’s images: 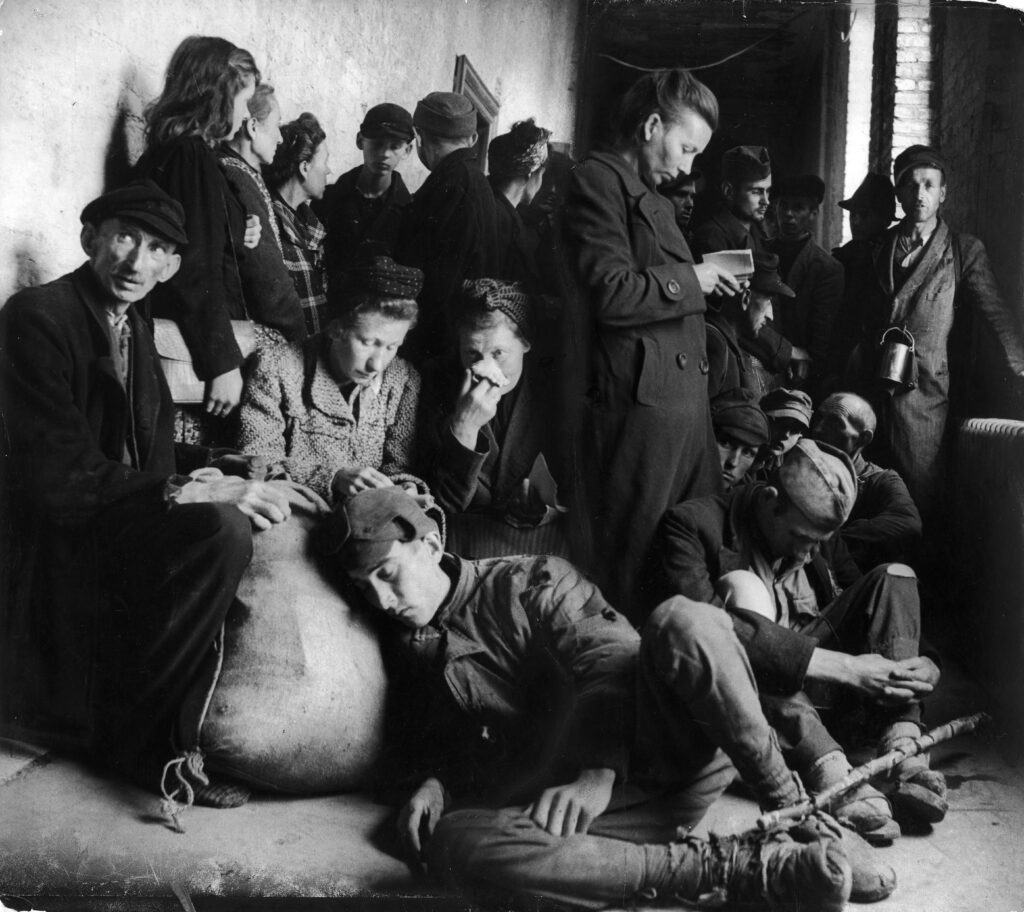 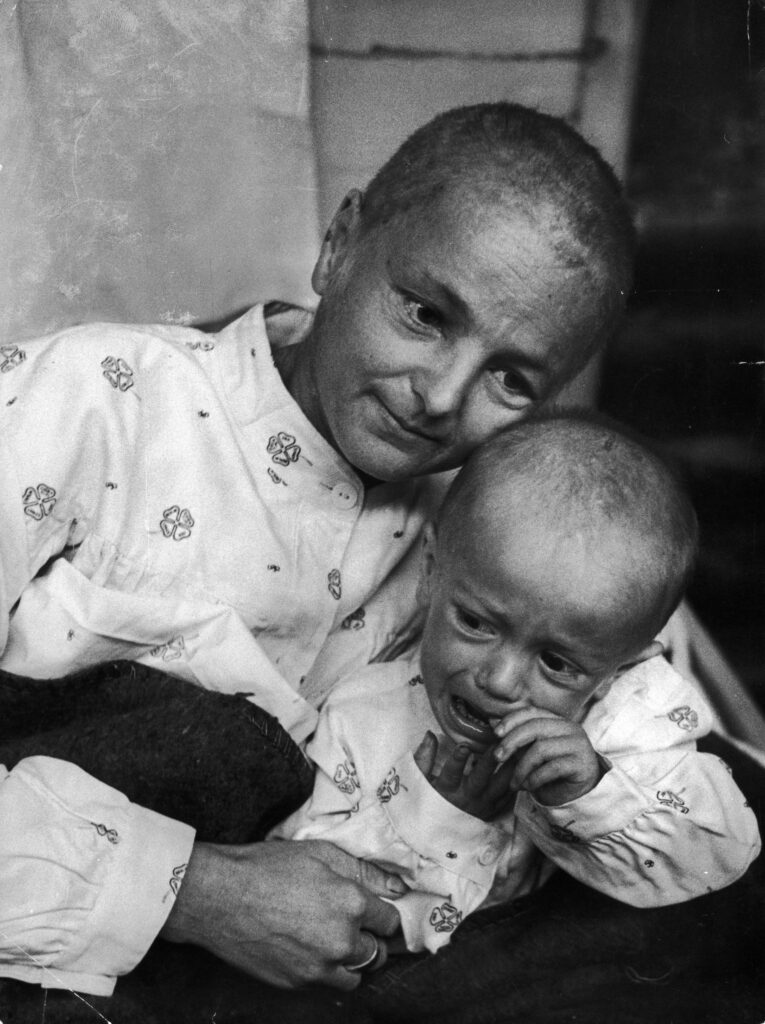 A starving German woman and child were taken in at a hospital in Berlin after having walked 180 miles from Silesia, 1945. 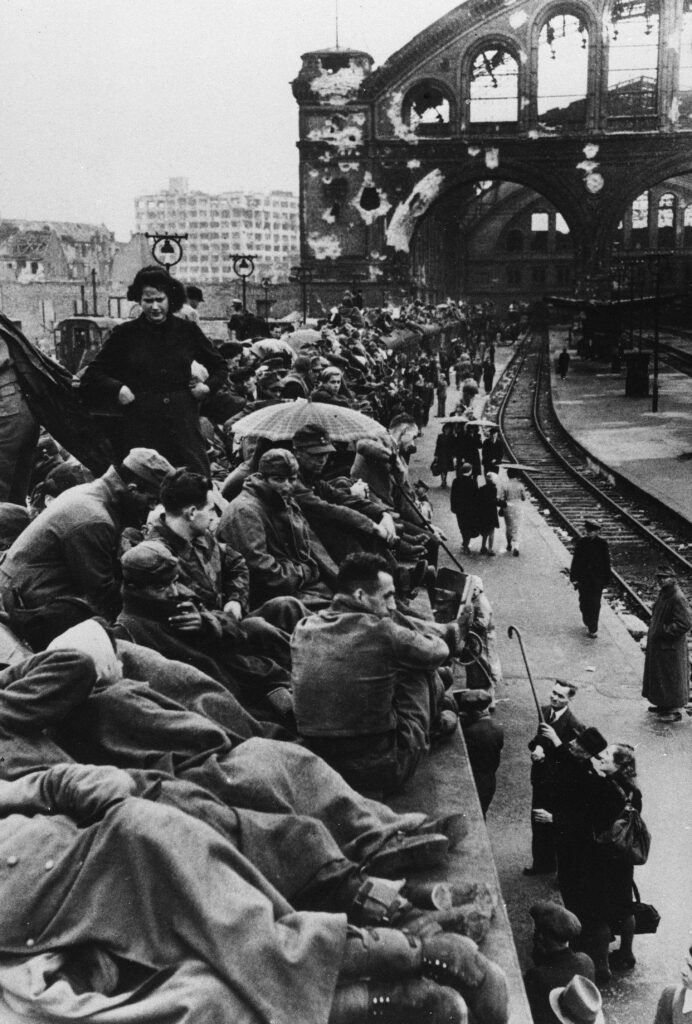 German refugees, civilian and soldier alike, crowded platforms of the Berlin train station after being driven from Poland and Czechoslovakia following the defeat of Germany by Allied forces, 1945. 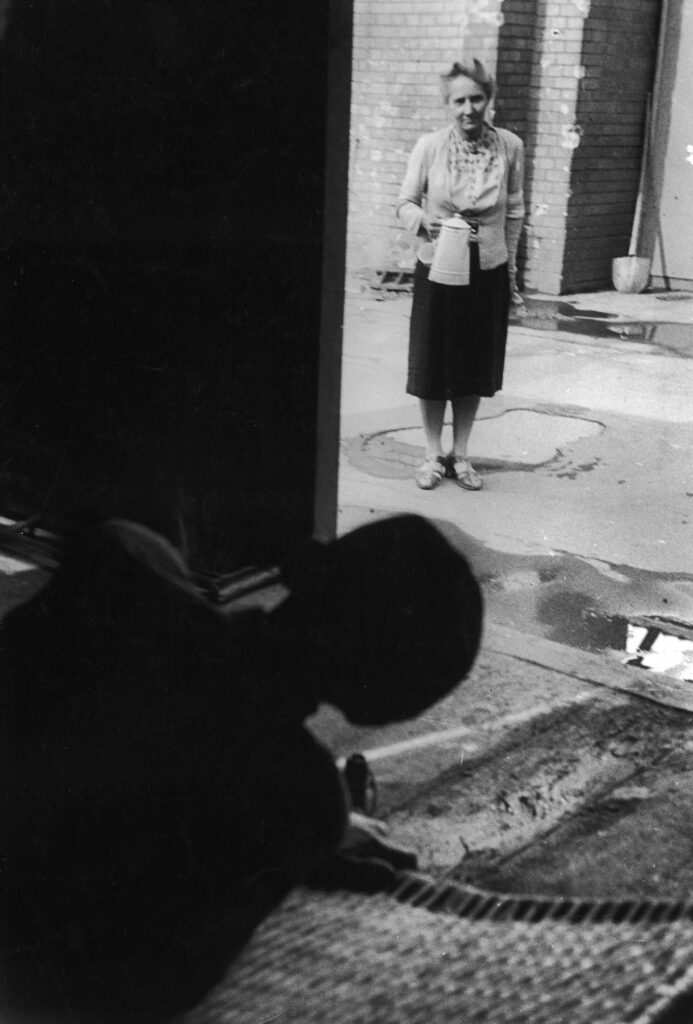 A dying farmer raised his head to call to German Red Cross worker hesitating outside the truck, called a “”death carriage.”” October 1945. 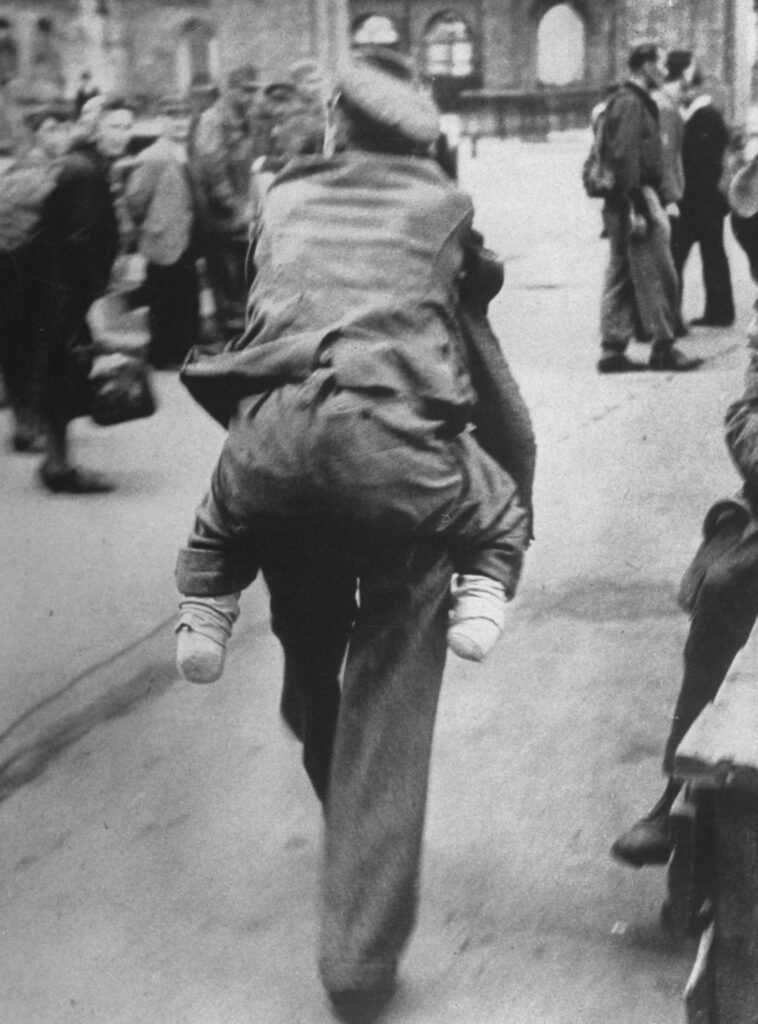 A former German soldier who had lost his lower legs was carried by a fellow soldier after departing a train that had brought him back to Germany from a Russian POW camp, 1945.