Twenty-five-year-old Frank Sinatra sang "As Time Goes By" at the Riobamba nightclub, 1943.

Frank Sinatra sang to Vivian Blaine in a scene from film “Guys and Dolls,” 1955.

LIFE’s coverage of Frank Sinatra over the course of his illustrious career was, to put it mildly, ample. But of all the magazine’s photo essays and reviews and bits of gossip, perhaps nothing captured his hold over the American public young women, in particular better than letters sent to the editors in response to an article that deigned to compare Sinatra to one of his contemporaries, the actor Van Johnson:

When Norma and Maureen wrote this letter to LIFE in 1944—sandwiched, as it was, between others that expressed the same sentiment—Sinatra was just shy of 30 and two years into the budding phenomenon of “Sinatramania.” Not only was he monstrously popular, but he was proving there to be a profitable market for popular music targeted to a budding new group called teen-agers. The singer, born on Dec. 12, 1915, in Hoboken, N.J., had already developed as recordings continue to prove nearly two decades after his death at 82 one of the most recognizable voices in history. It was, after all, why they called him “The Voice.”

It was also why, between the early 1940s and the early 1970s when LIFE ceased to be a weekly publication, the magazine dispatched a cadre of photographers—Peter Stackpole, Gjon Mili, Allan Grant, Bill Eppridge, John Dominis and Michael Rougier to name a few—to bring a piece of Ol” Blue Eyes into its readers’ homes week after week. Here, in celebration of Sinatra’s centennial, are their most memorable portraits of the unforgettable singer. 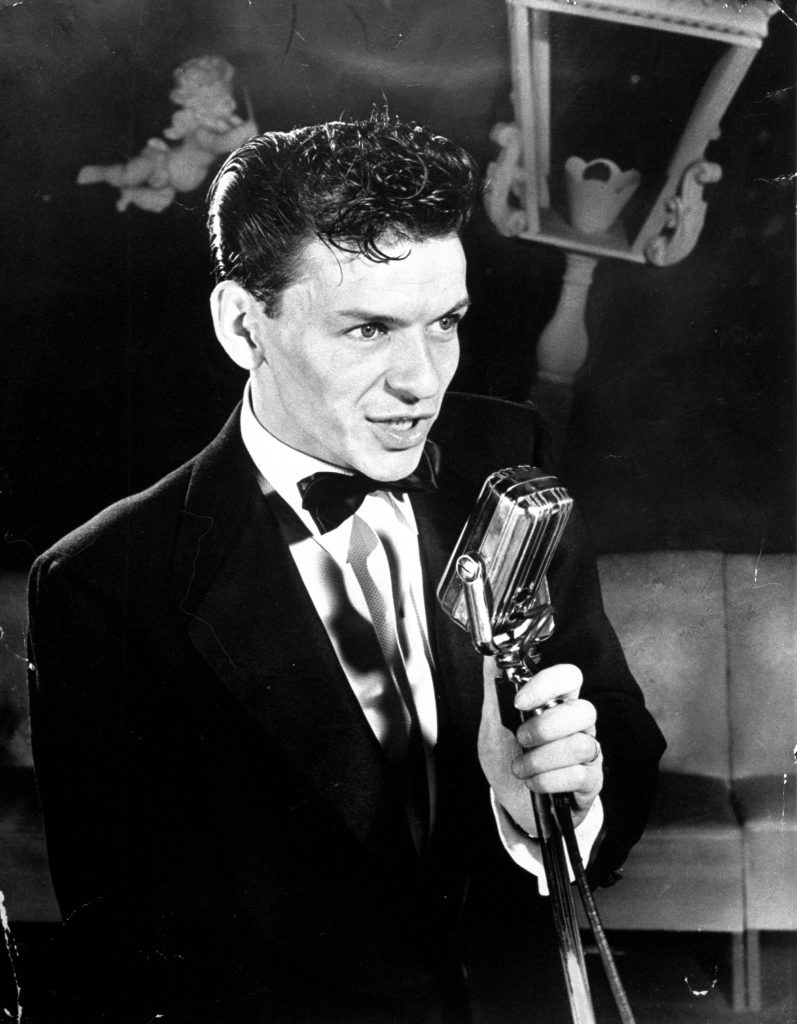 Twenty-five-year-old Frank Sinatra sang “As Time Goes By” at the Riobamba nightclub, 1943. 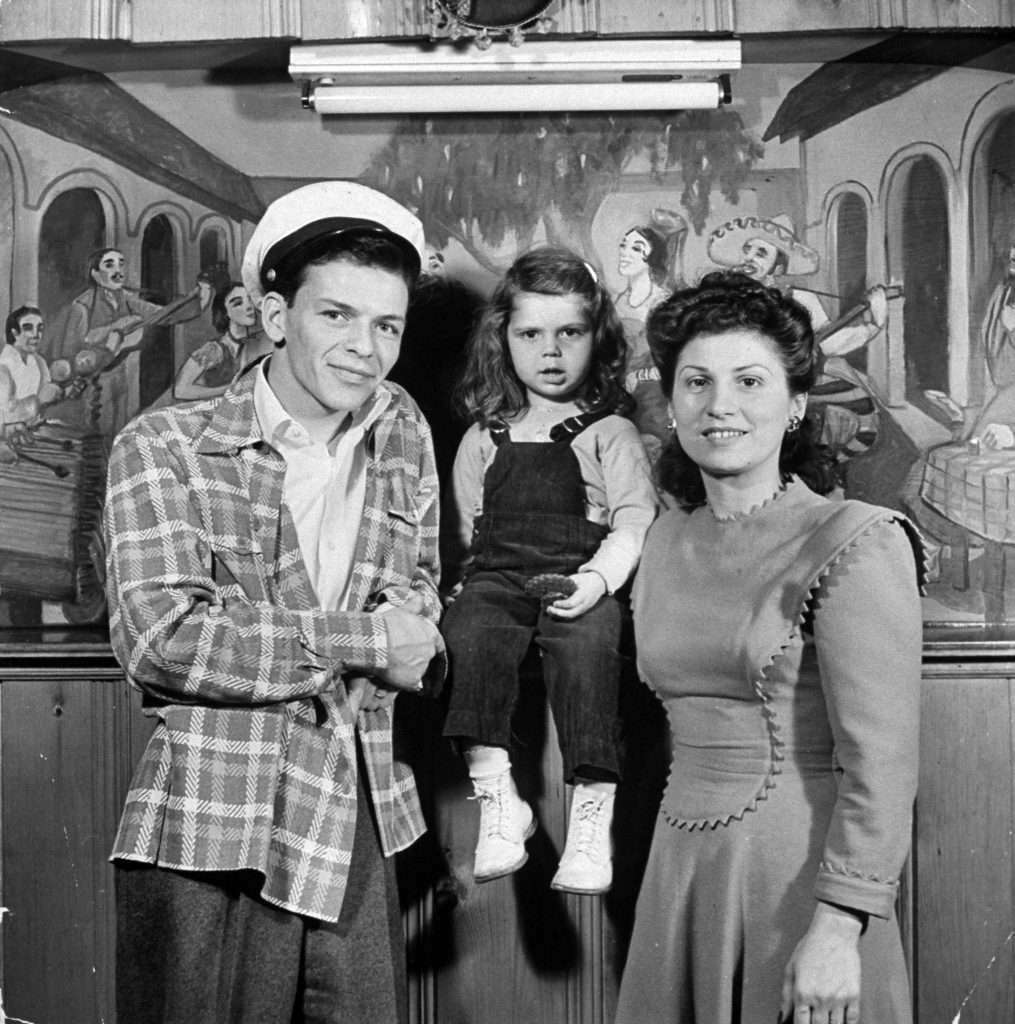 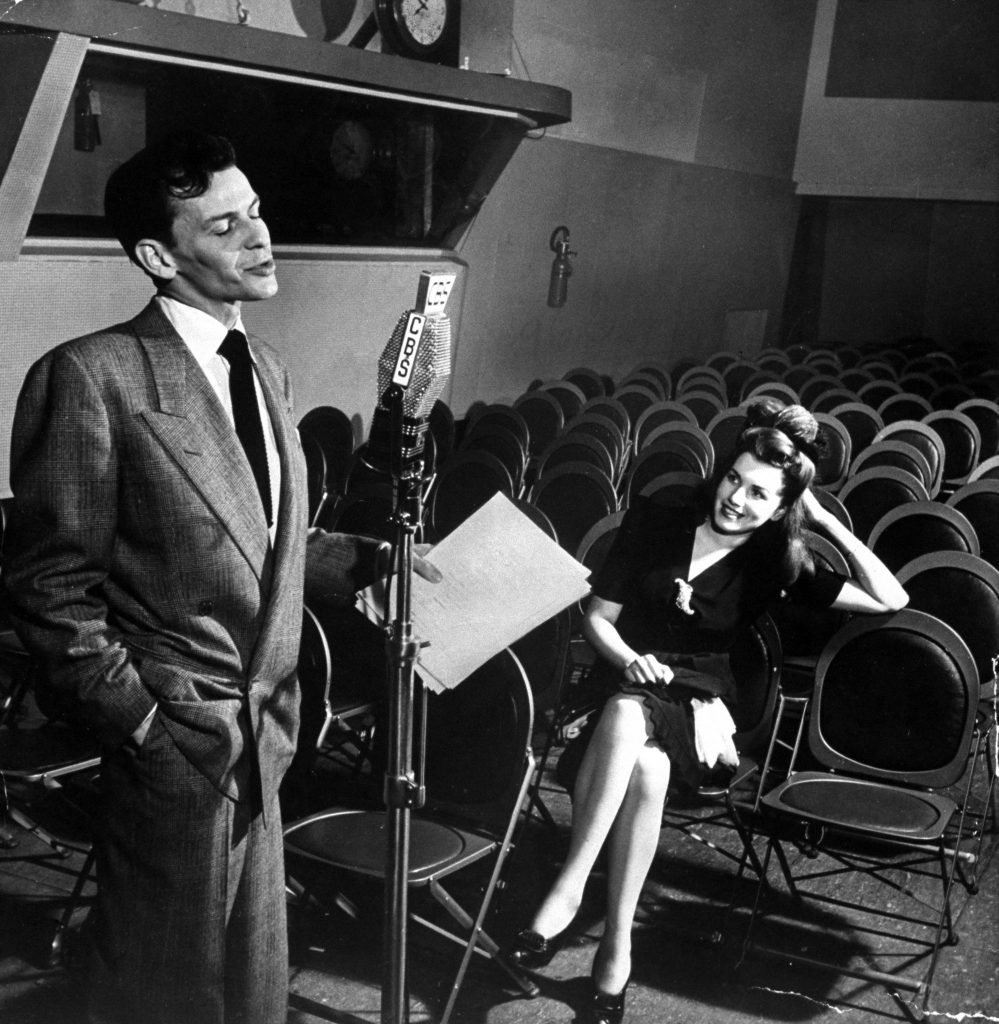 Frank Sinatra sang “Close to You” in the CBS radio broadcasting studio as his admirer Rita Stearns, the winner of the “Why I Like Frank Sinatra” contest, looked on, 1944. 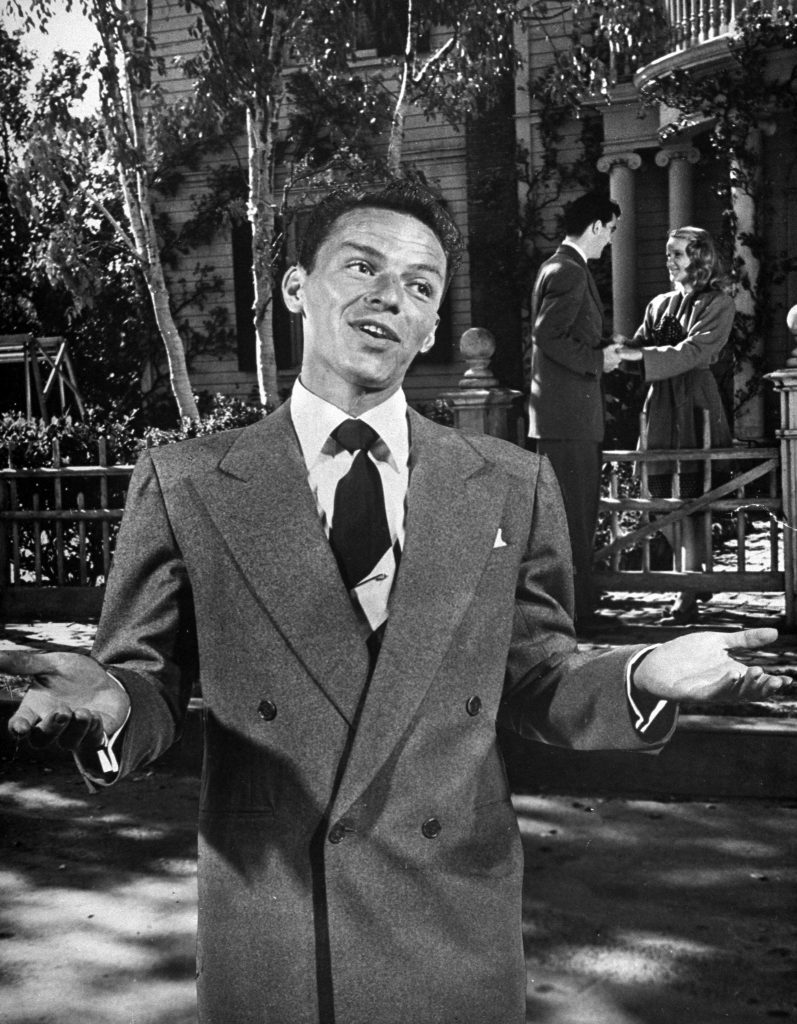 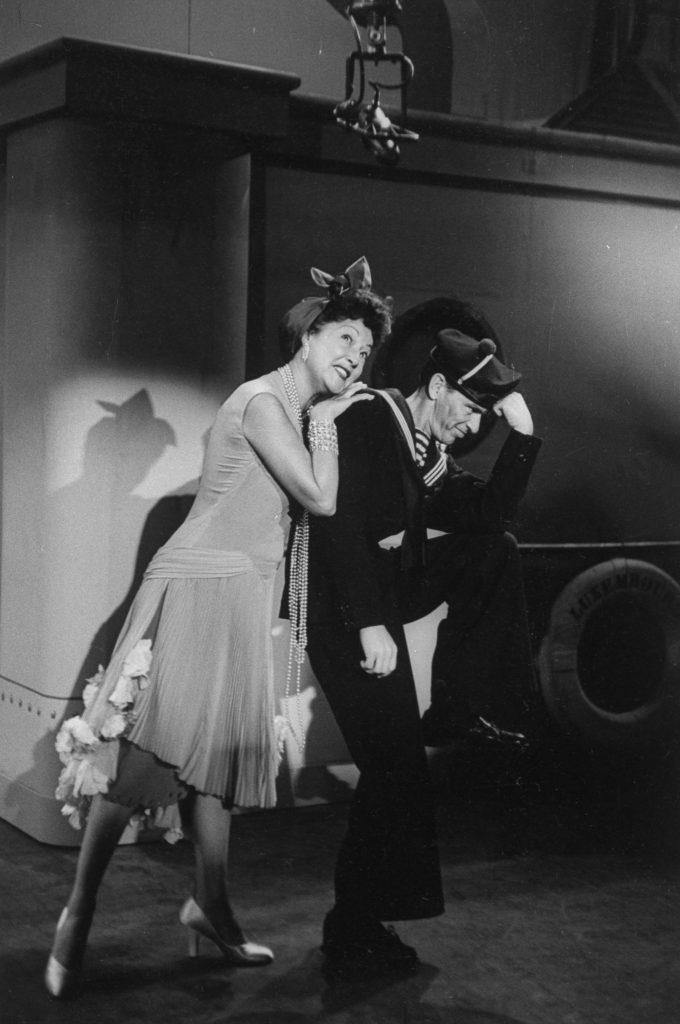 Ethel Merman and Frank Sinatra sang the duet “You’re the Top” in a preliminary rehearsal for “Anything Goes,” presented on “The Colgate Comedy Hour,” 1954. 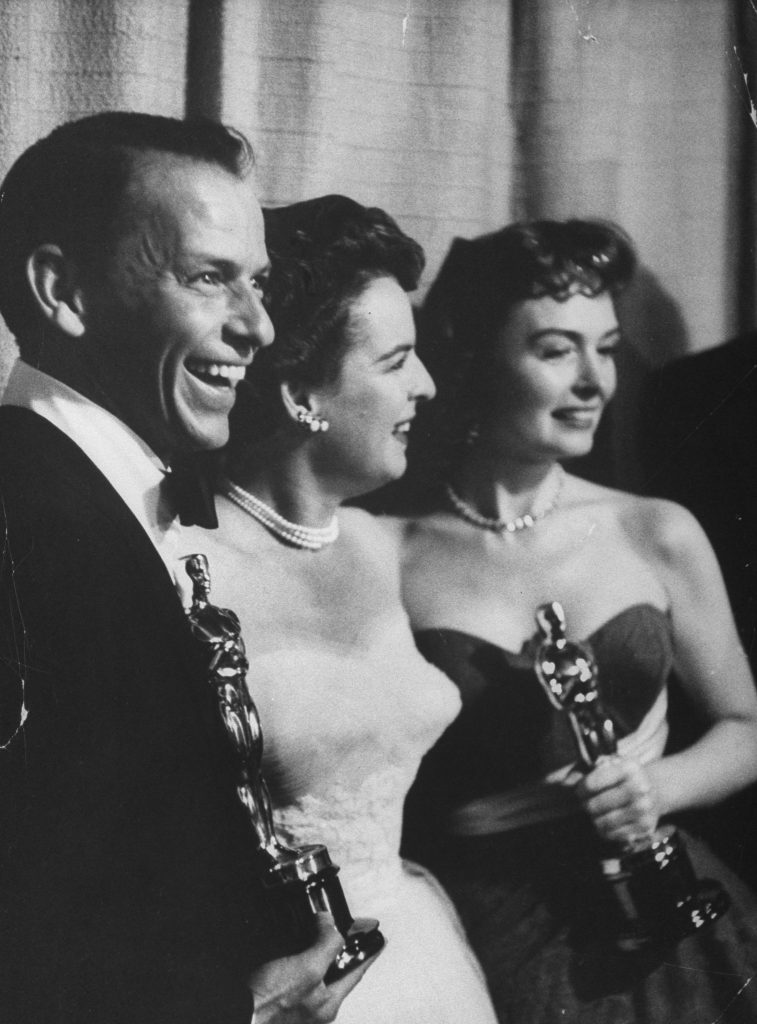 Frank Sinatra and Donna Reed (right) held the Oscars they received for Best Supporting Actors in the movie “From Here to Eternity” while posing presenter and actress Mercedes McCambridge, 1954. 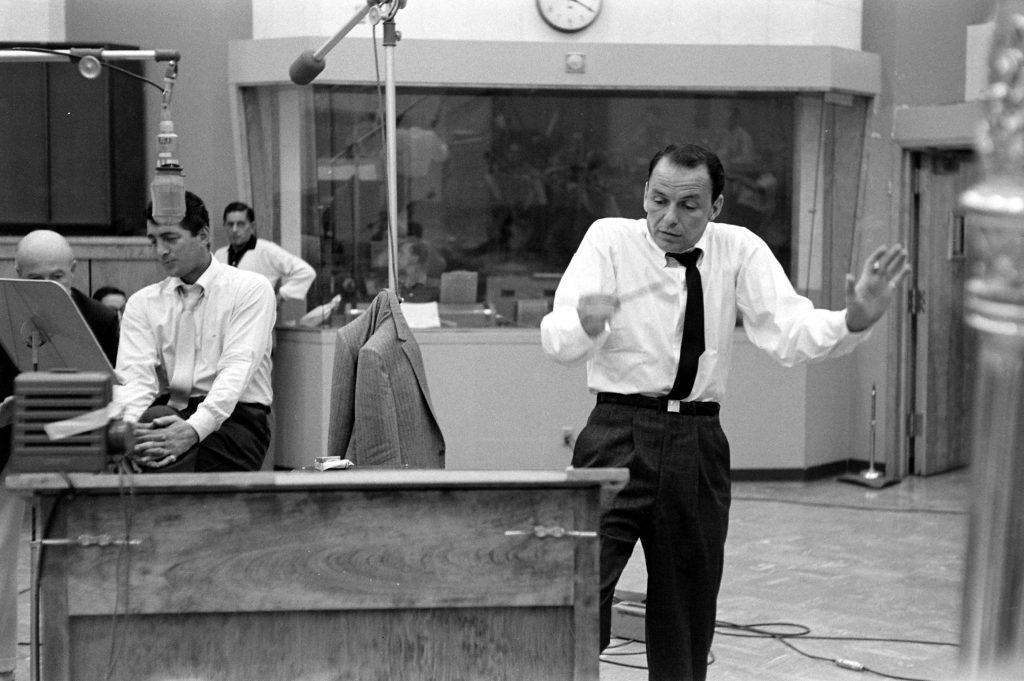 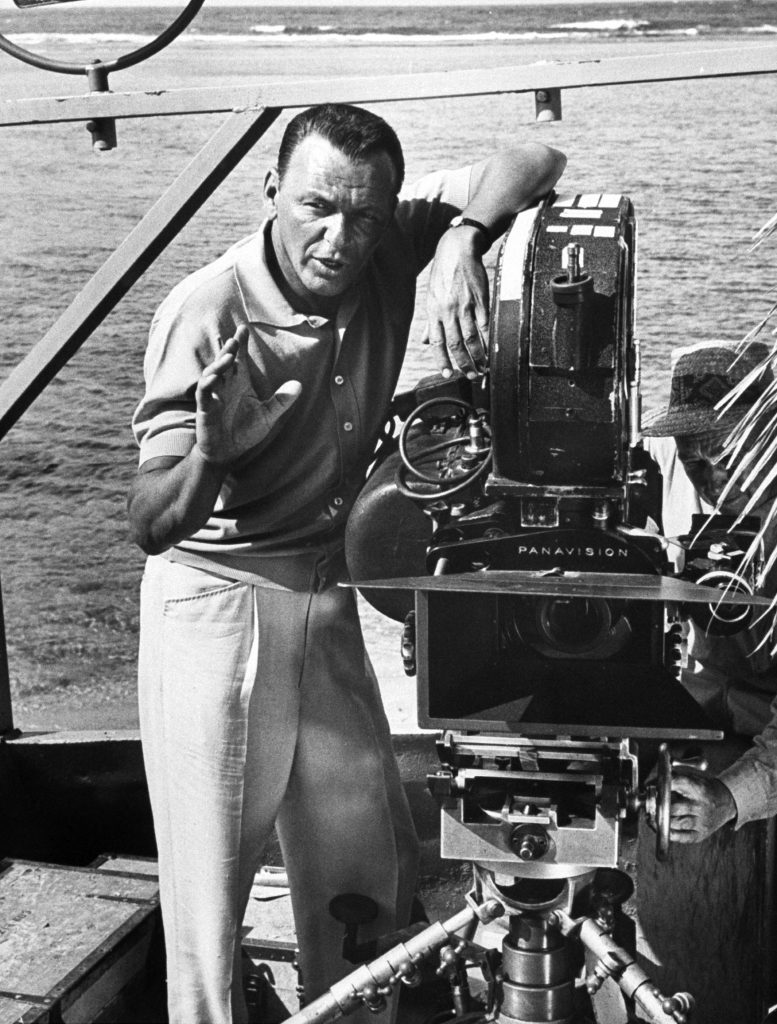 Director Frank Sinatra during filming of movie “None But The Brave,” 1964. 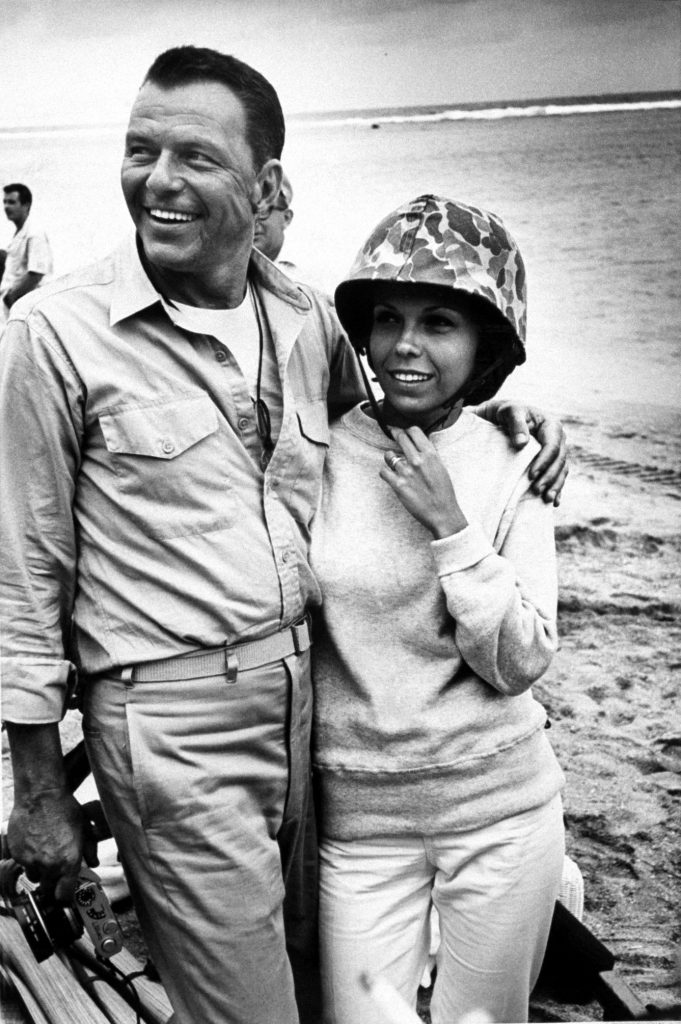 Nancy Sinatra with father, Frank Sinatra, during producing and directing of movie “None But The Brave,” 1964. 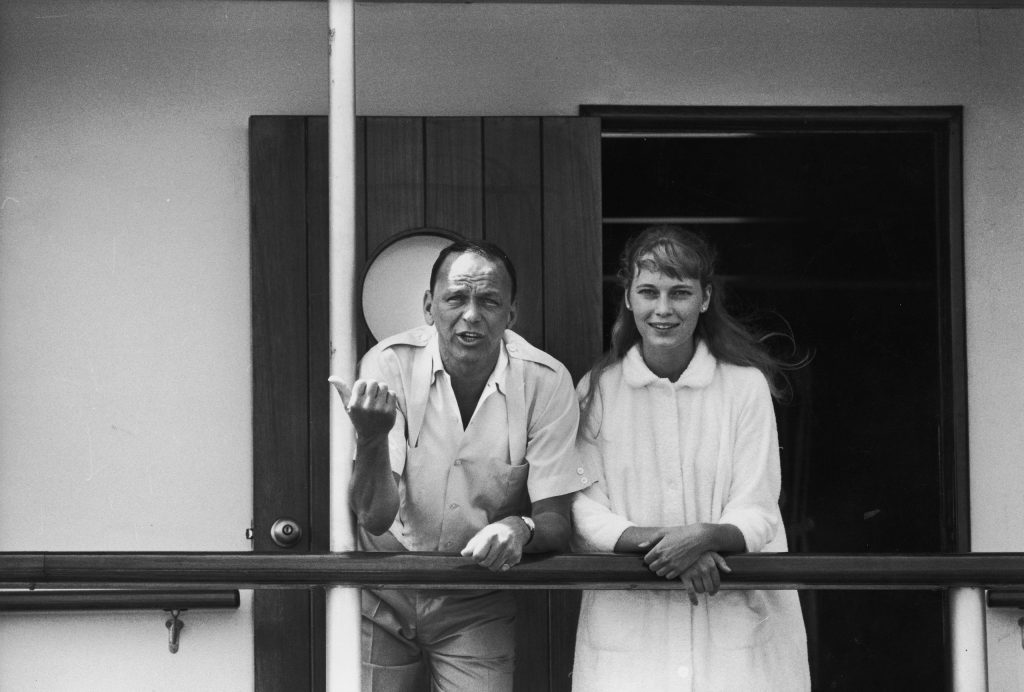 Frank Sinatra with girlfriend Mia Farrow on the deck of the yacht Southern Breeze, 1965. 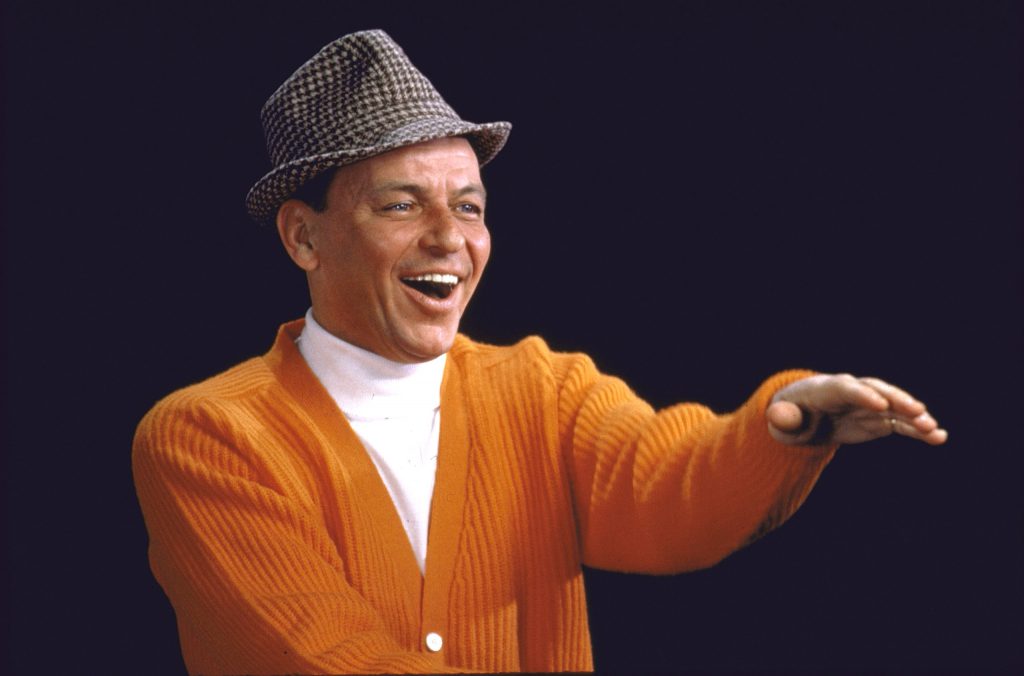 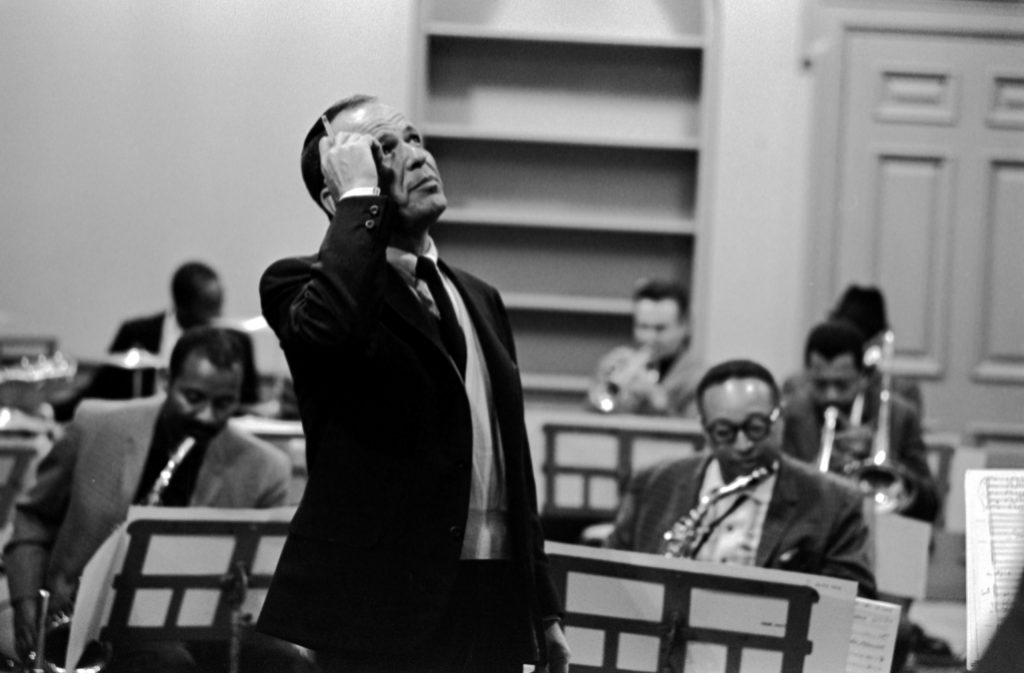 Frank Sinatra gave the musicians of the Count Basie Band direction at a rehearsal in an LA sound stage. Count Basie was playing on the piano, 1965. 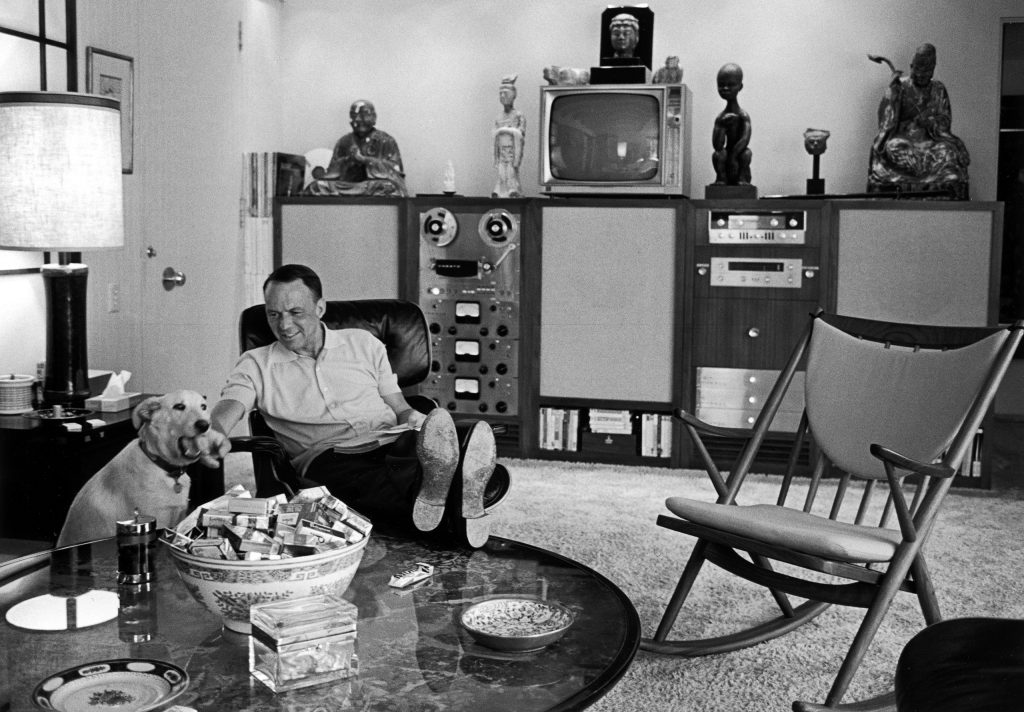 Frank Sinatra relaxed with his dog Ringo at home, 1965. 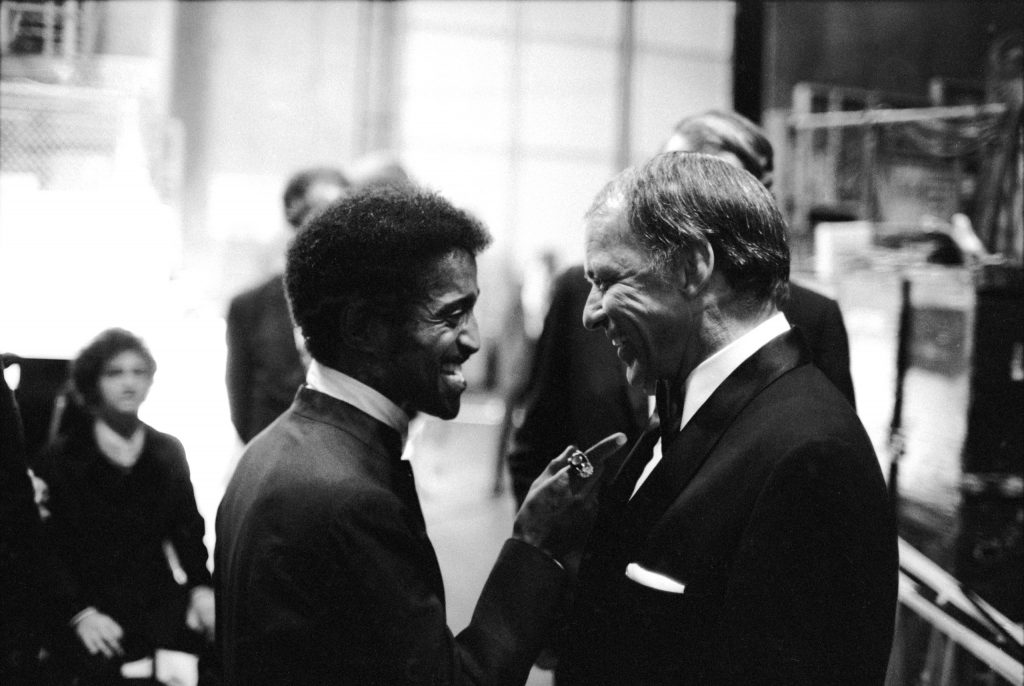 Sammy Davis Jr. talked with singer Frank Sinatra at a performance, at UCLA, 1971. 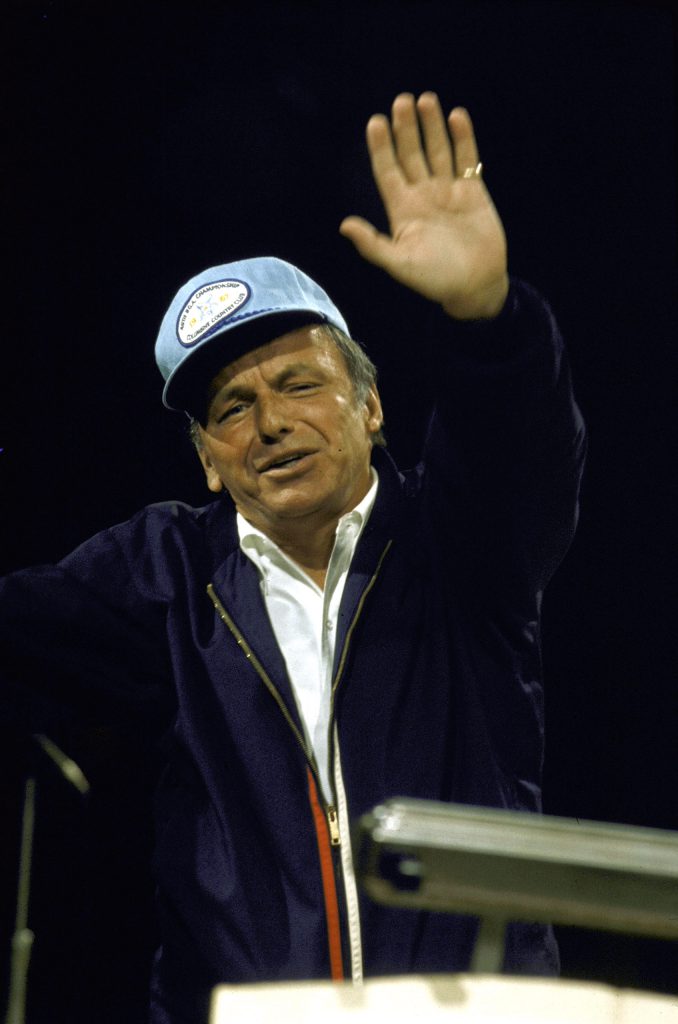 Frank Sinatra waved at the camera during a rehearsal for a benefit concert, 1971. 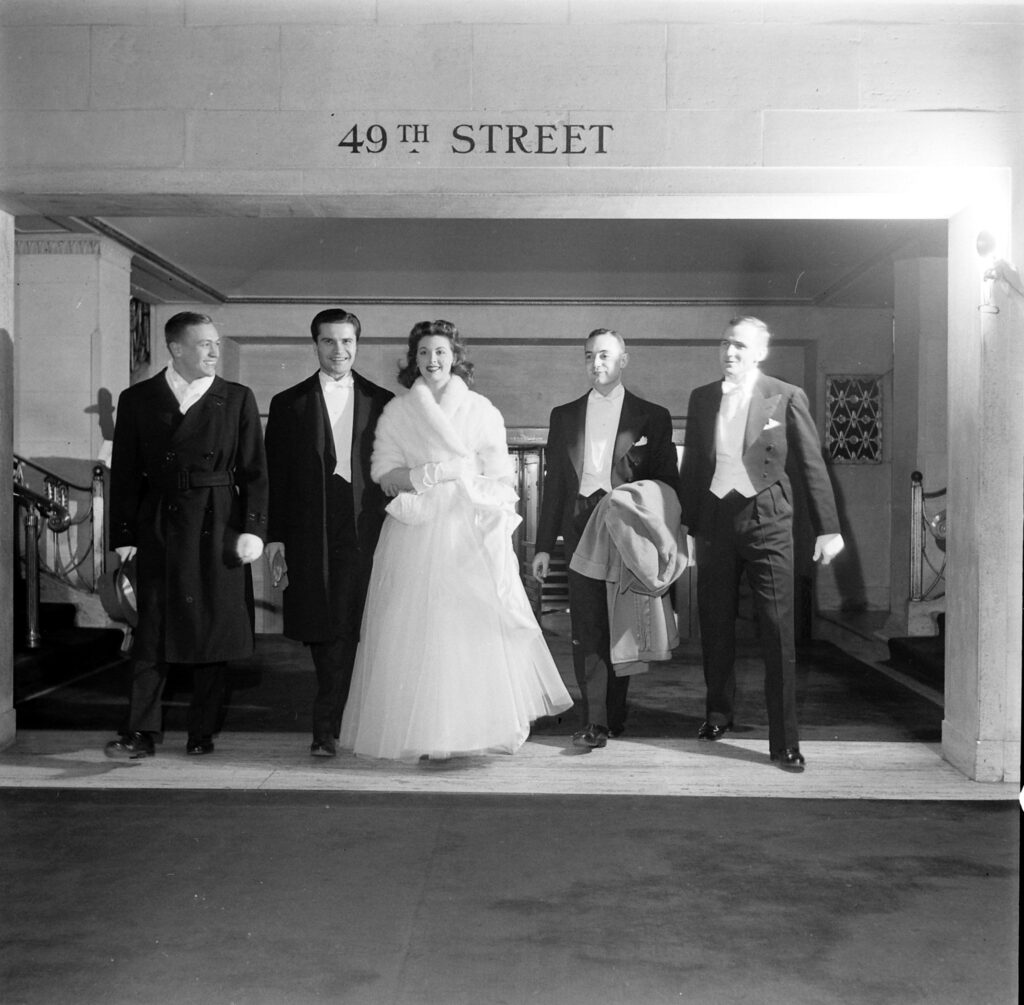 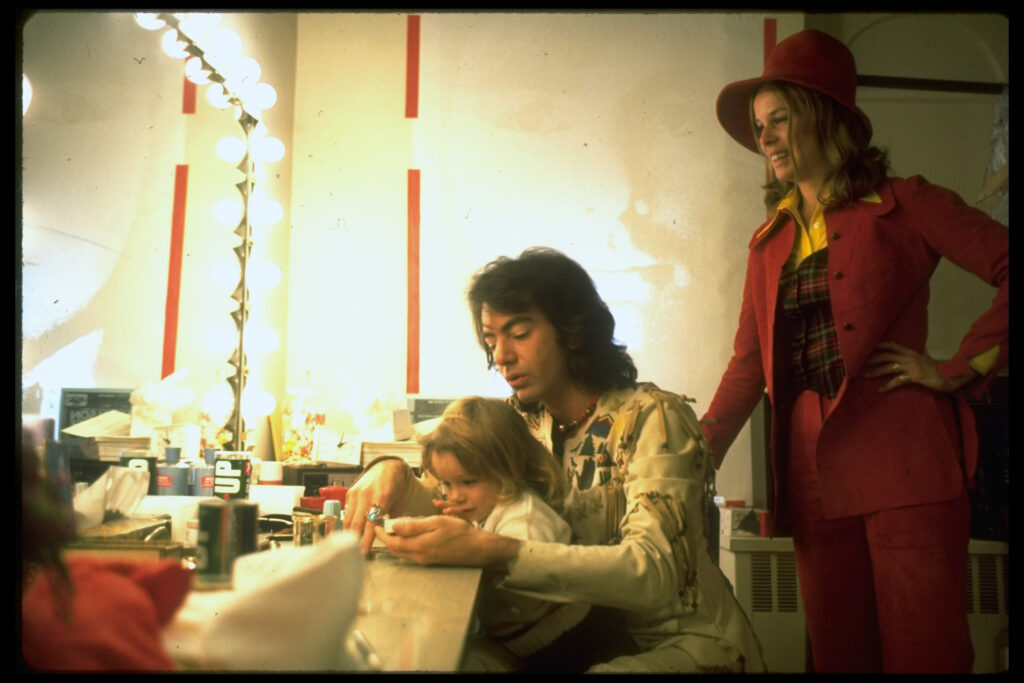 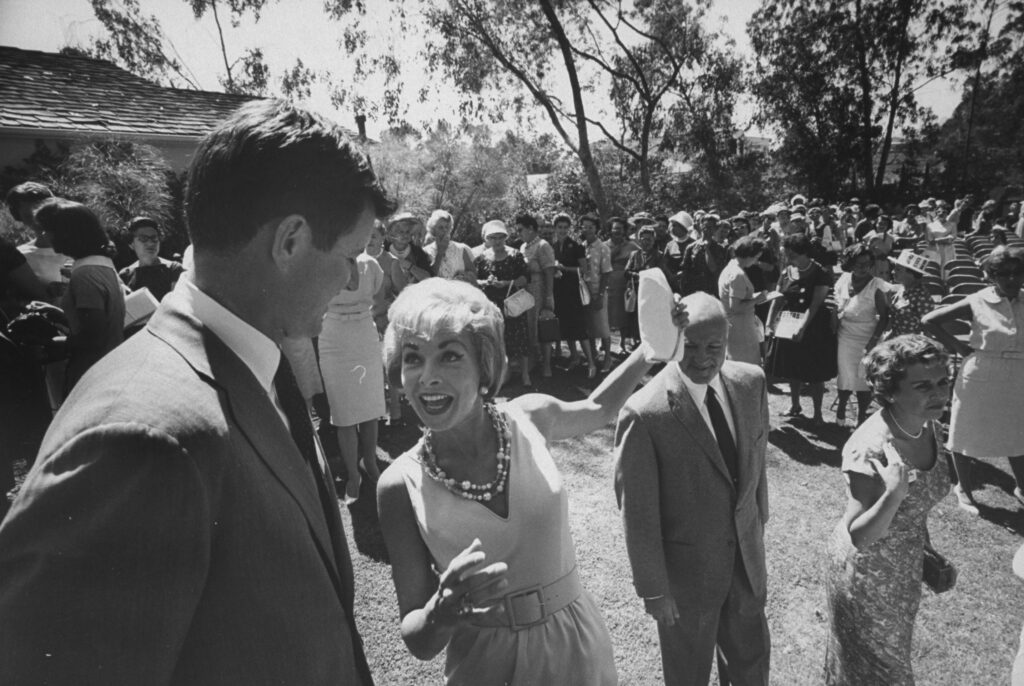 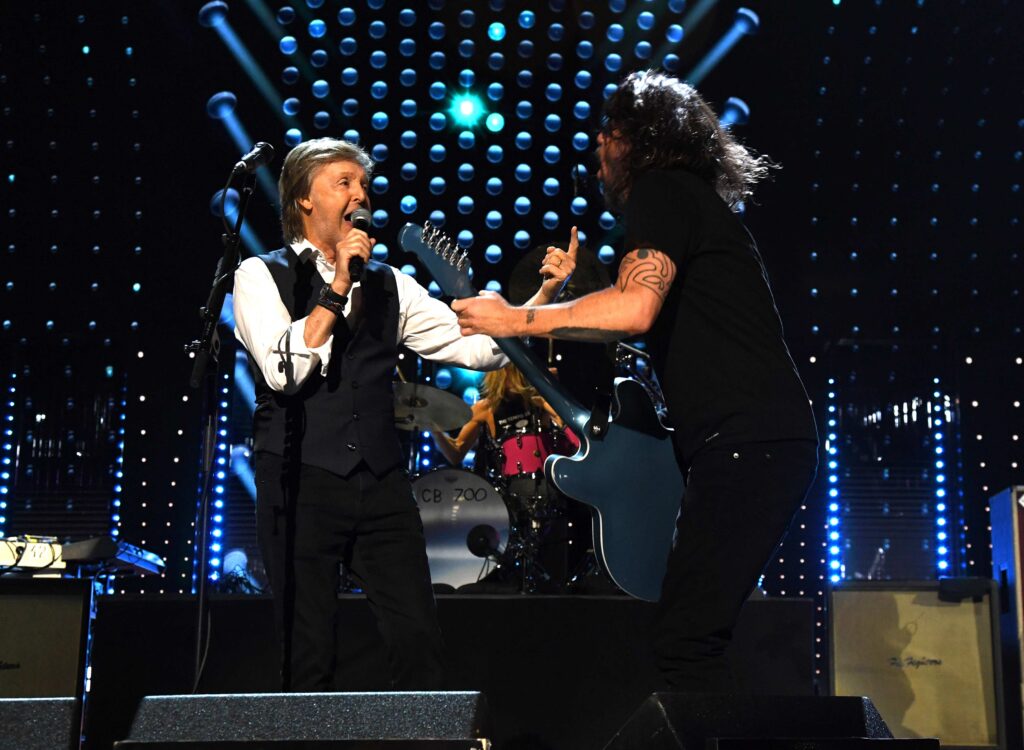