Georgia O'Keeffe photographed on the roof of her Ghost Ranch home in New Mexico, 1967.

Georgia O’Keeffe photographed on the roof of her Ghost Ranch home in New Mexico, 1967.

Few major American artists have been as productive, for so long, in so many media, as Georgia O’Keeffe was during her extraordinary career. From her early, accomplished drawings which caught the eye of her future husband, Alfred Steiglitz, in 1916 through her firm studies of urban life and architecture in the 1920s and well into her gorgeous later works inspired by the natural beauty of New Mexico, O’Keeffe forged a unique, solitary path through the landscape of modern art.

Born during the year of Queen Victoria’s Golden Jubilee (1887), the span of O’Keeffe’s life (she died in 1986, at 98, in New Mexico) seemingly encompassed not mere decades, but ages: the invention of the airplane, two world wars, the Cold War, the Space Race and the introduction of the personal computer. So much of her work the huge flowers; the sun-bleached skulls; the brilliant, near-abstract nature studies; the sensuous pottery is so distinctive that categorizing her, or placing her in one school or another, is impossible.

If any artist ever followed her own vision, no matter where it took her, it was O’Keeffe.

Here, LIFE.com looks at a single photograph John Loengard‘s astonishing 1967 portrait of the artist as an old woman that somehow manages to suggest, in one frame, Georgia O’Keeffe’s willful isolation, her breathtaking self-possession and her singular place in the American consciousness.

Loengard’s unforgettable picture made on the roof of O’Keeffe’s Ghost Ranch home in northern New Mexico is far more than just a study, or a sketch, of a formidable figure. Framed against the sky and desert, seated before a chimney that feels, in its simplicity, almost totemic, the black-clad O’Keeffe seems carved into the photograph, as much a part of the severe Western landscape as the rocks, sand and sagebrush that surrounded her. She might have been sitting there for an hour, or for a thousand years.

Of the many, many fine and not infrequently iconic portraits that LIFE magazine published through the years, Loengard’s picture of O’Keeffe is one of the very greatest.

In a March 1968 cover story on O’Keeffe (Loengard’s rooftop portrait graced the issue’s cover), LIFE devoted more than a dozen pages to the artist, hoping to illuminate for its readers what the magazine called “the interlocking of her life and art”:

Light edges over the darkened cliffs. Through the sage a woman walks silently, a stick in her hand to ward off snakes. She scans the mists in the far-off mountains. She picks up a stone and smooths it, touches the twisted branch of a piñon tree, toes a patch of lichen. Two smoke-toned chows watch and sniff, then jounce knowingly after their mistress. Another day has begun for Georgia O’Keeffe.

For the better part of three decades, this has been the ritual of one of the most distinguished pioneers of modern American art, a painter still vigorous in her 81st year. Ranging between her two homes in New Mexico an adobe “villa” in Abiquiu and a desert ranch to the north George O’Keeffe renews each day her passionate ties to the land. From these encounters has come a steady outpouring of paintings, many of them now classics in U.S. museums. Whether emphatically realistic or starkly abstract, fantasies of nature or landscapes of the mind, these works distill not only her experience but something of her strong, adventurous spirit.

TIME’s Richard Lacayo, meanwhile, had this to say about O’Keeffe on the occasion of a major 2009 show of her work at the Whitney in New York:

The Whitney’s colorful show puts aside the Georgia O’Keeffe we know best the Gray Lady of New Mexico to retrieve an O’Keeffe we ought to know better, the young woman who went fearlessly down the road of entirely abstract art in 1915, when it was a fresh idea with which only a few artists anywhere in the world were experimenting. Her taut vertical thunderbolts and giant crests of rainbow colors are like campaign banners being unfurled by an artist who has set herself and the art of painting entirely free.

Freedom from cliché, from stasis, from the expected and the tame has always been the aim and the spur of the greatest artists. In Loengard’s elemental portrait of a woman who long ago slipped the bonds of convention, that freedom is seen for what it truly is: sober, essential, invincible. 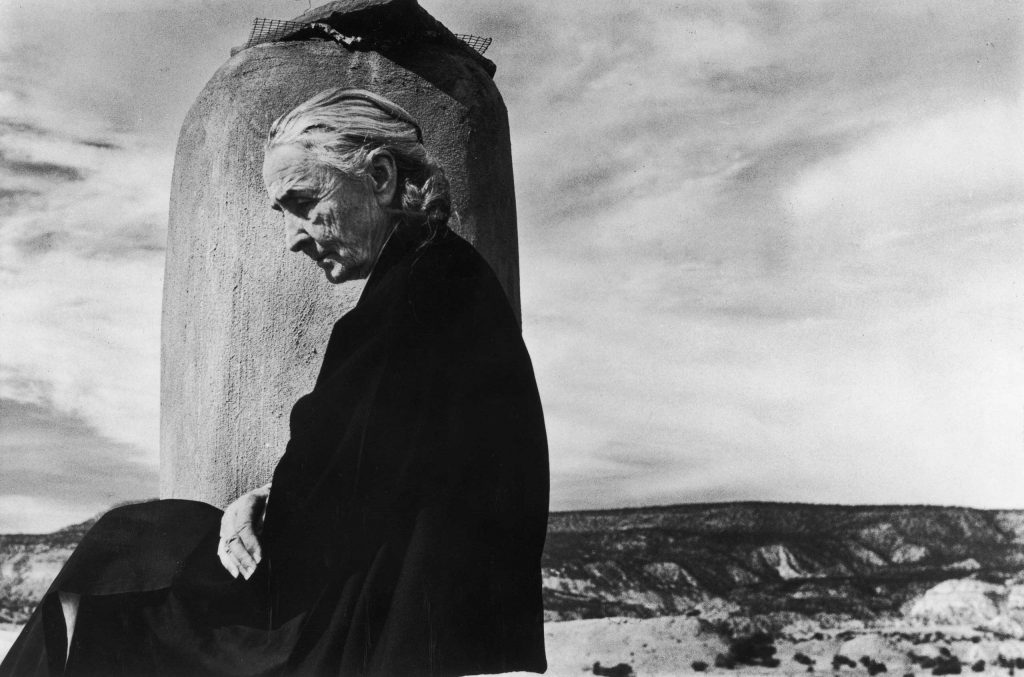 Georgia O’Keeffe photographed on the roof of her Ghost Ranch home in New Mexico, 1967.