When Jack Roosevelt Robinson stepped onto Brooklyn’s Ebbets Field on April 15, 1947, he not only changed the face of professional baseball in America. In ways subtle and profound ways, he changed the nation itself.

Breaking baseball’s color barrier, Robinson embarked on an odyssey that brought him renown, respect and, by all accounts, an early death, at 53, from the unimaginable stress he suffered, on and off the field, as the first black player in the major leagues.

For most of Jackie Robinson’s long journey, LIFE magazine was there, chronicling his baseball triumphs including Brooklyn’s only World Series title, in 1955, and his life and achievements away from the diamond.

Here, LIFE.com offers a selection of pictures that paint a portrait of a man possessed of rare dignity, competitive fire and grace under pressure .

In 1950, when LIFE covered the filming of the movie version of his life, The Jackie Robinson Story (in which Robinson starred, quite winningly, as himself), the magazine explained the man’s appeal, at the time and for coming generations, like this: “Previous baseball heroes Lou Gehrig, Babe Ruth, Monty Stratton [played by Jimmy Stewart] have had to wait till they were past their prime or dead before movies were made about them, and actors had to be taught laboriously to copy their stances and swings.”

But Jackie Robinson is having his story told by Hollywood while he is still one of the best players in baseball. And Jackie does not need any actor to copy him; he has gone out and played himself. . . . He fitted into his new role as film star with the same easygoing grace and cold determination that have carried him through his whole career. [He plays the part] with the natural charm of a born screen personality.

With the movie completed, “Jackie went back to his spring training and started off the new season in his usual style,” LIFE noted, “batting .455 the first week.”

Robinson’s skills on the diamond and his prodigious athletic gifts in general were never in question. He was UCLA’s first-ever varsity athlete in four sports (baseball, basketball, football and track) and even though he started his major league career relatively late in life, at 28 years old, he brought an electrifying combination of hard-won discipline and explosive talent to the game that thrilled fans, awed his teammates and consistently rattled opponents.

Case in point: One of the most famous of all the pictures ever made of Robinson—in fact, one of the most iconic baseball photographs ever made—illustrates not only the man’s intensity and his will to win, but his wonderfully disruptive energy on the base paths. (See the sixth photo in this gallery.) Captured by LIFE’s Ralph Morse in Game 3 of the 1955 World Series against the Yankees, the image shows Robinson mischievously working to distract catcher Yogi Berra and rattle pitcher Bob Turley. This picture is almost always described as “Jackie Robinson rounding third base,” but the fact that he is provocatively dancing off the bag actually makes the photograph all the more rousing, and so much more representative of his style of play.

Decades later, Morse’s photograph remains one of the signature portraits of a great athlete at his most intensely, passionately competitive.

A footnote to that story is that, incredibly, Jackie Robinson, after years of battling for a World Series title, did not play in the deciding 7th game in 1955. He wasn’t a young man anymore, he was coming off his least-productive season as a Dodger (he hit only .256 with 12 stolen bases and eight home runs in 105 games) and manager Walter Alston benched him. Game 7 was the only World Series game the Dodgers played during his entire career in which Jackie Robinson did not take the field. But Dem Bums won it all that year, the one and only championship they won in all the years they played in Brooklyn.

Finally, though, it was Robinson as both flesh-and-blood man and as a combination of lightning rod, rallying cry and highly publicized symbol that caught the attention, and the admiration, of so many people of every race.

“I was in school in Alabama,” Hank Aaron once told LIFE.com, explaining why Jackie Robinson mattered then, and still matters today, “when I heard that he signed with the Dodgers. I was so happy. I wanted to be a ballplayer, and while I knew that what he was doing was a long way from where I was, I also knew someone had to do it before I could get there.”

All these years later, everyone who knows anything about baseball and about America in 1947 remains humbled by what Jackie Robinson endured, what he risked and what he achieved. 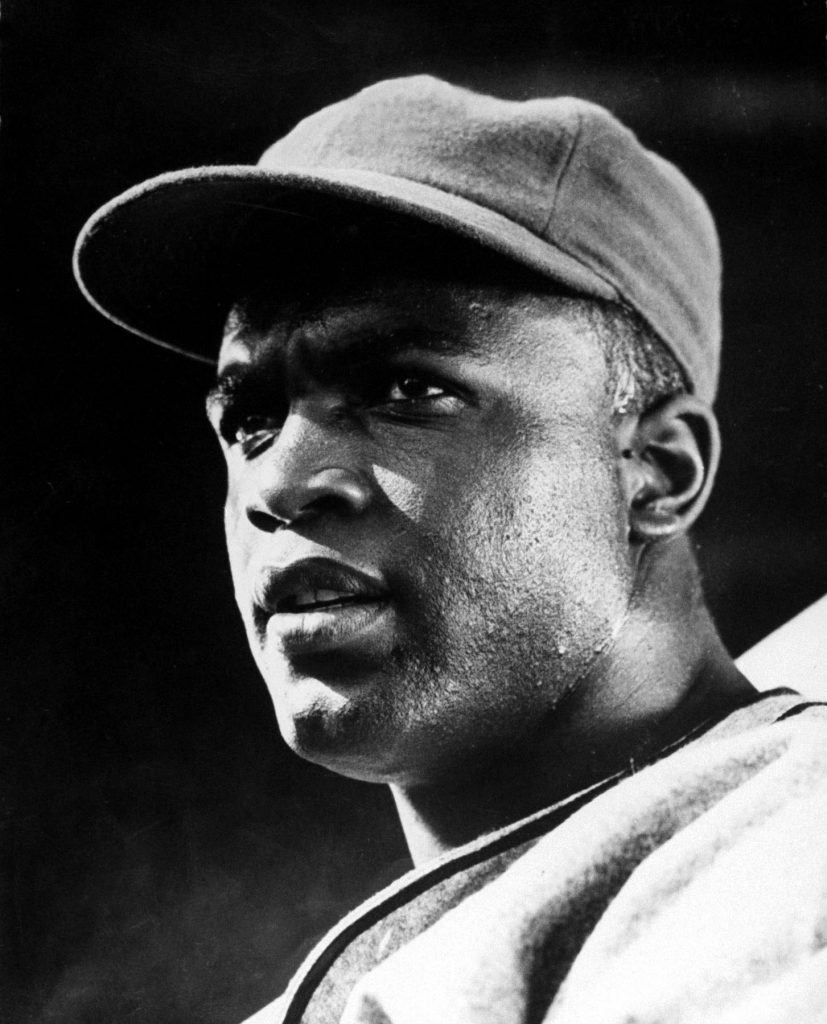 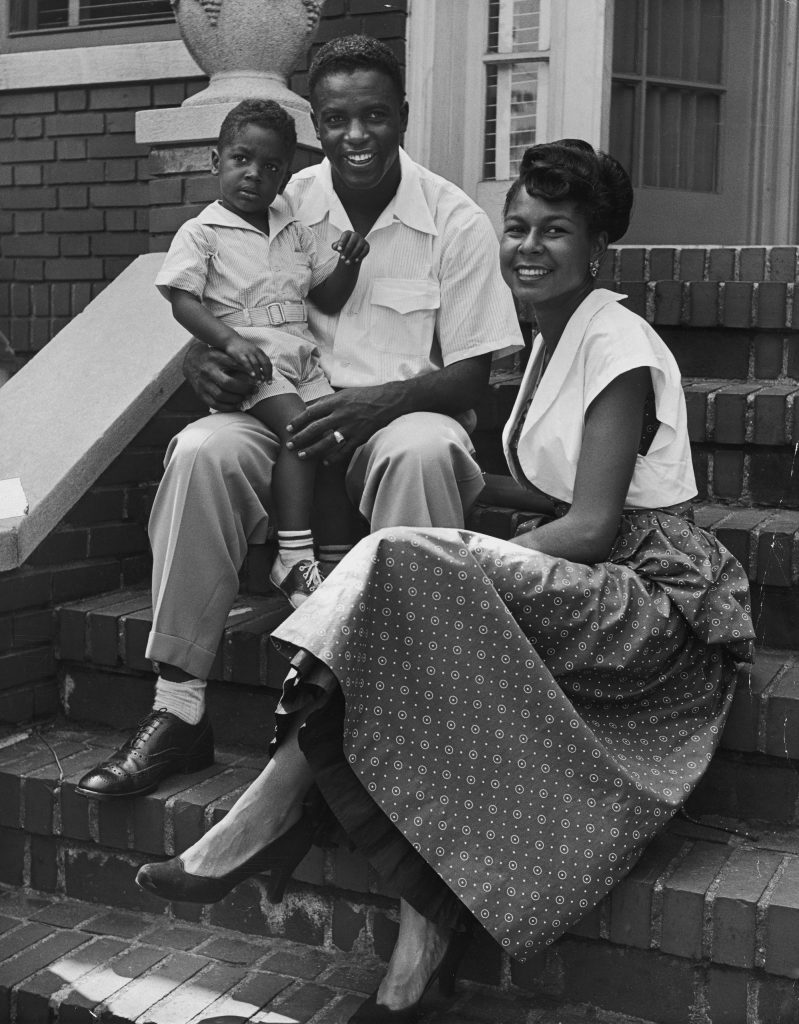 Jackie Robinson held his son, Jackie Jr., as he sat with his wife Rachel on the front steps of their home in 1949. 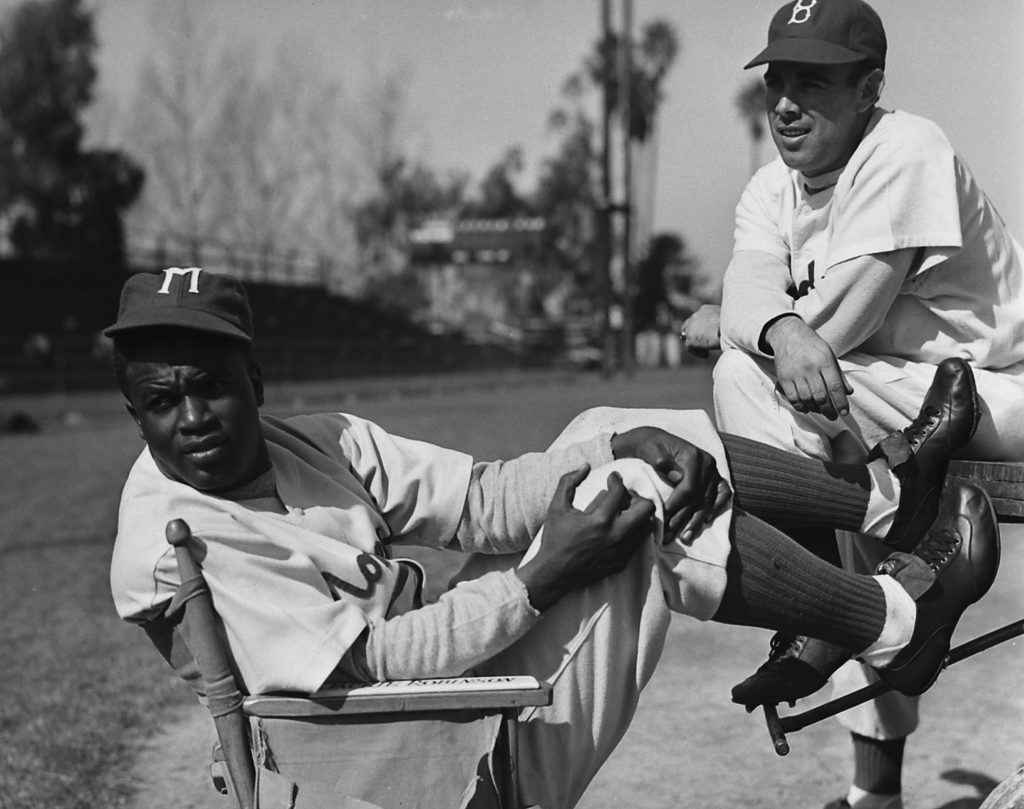 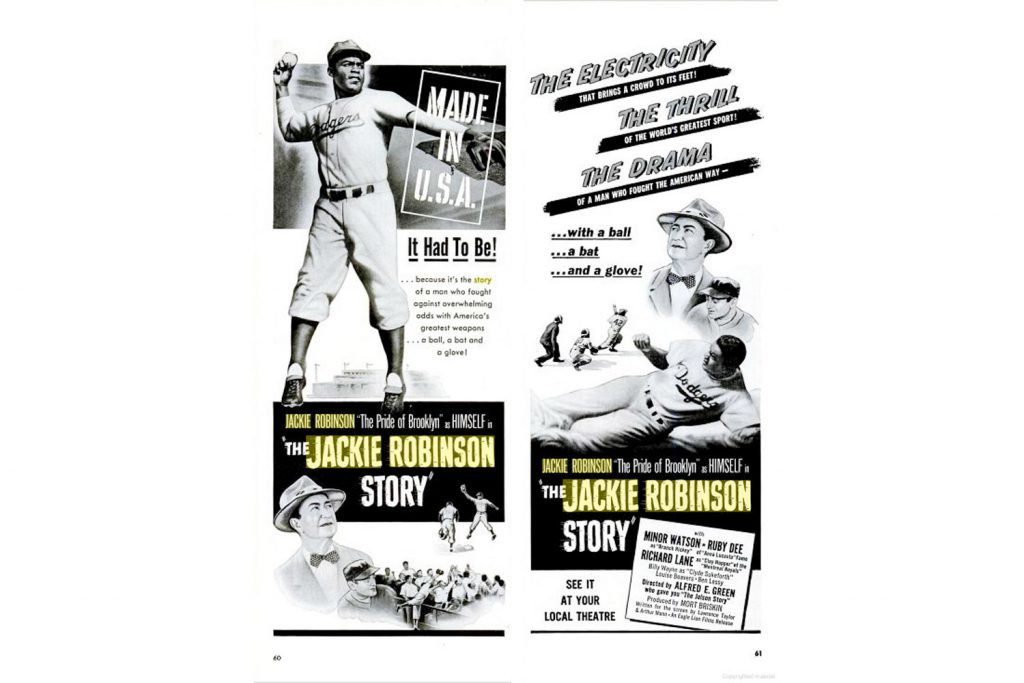 Advertisements for The Jackie Robinson Story from the May 15, 1950, issue of LIFE magazine. 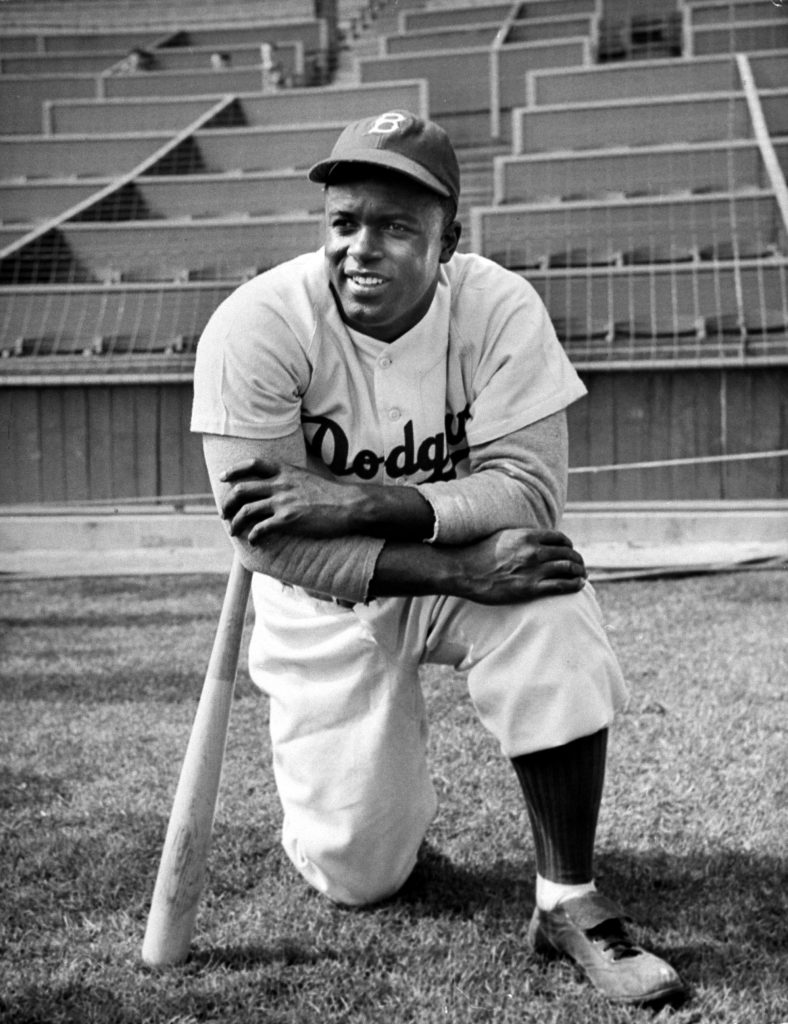 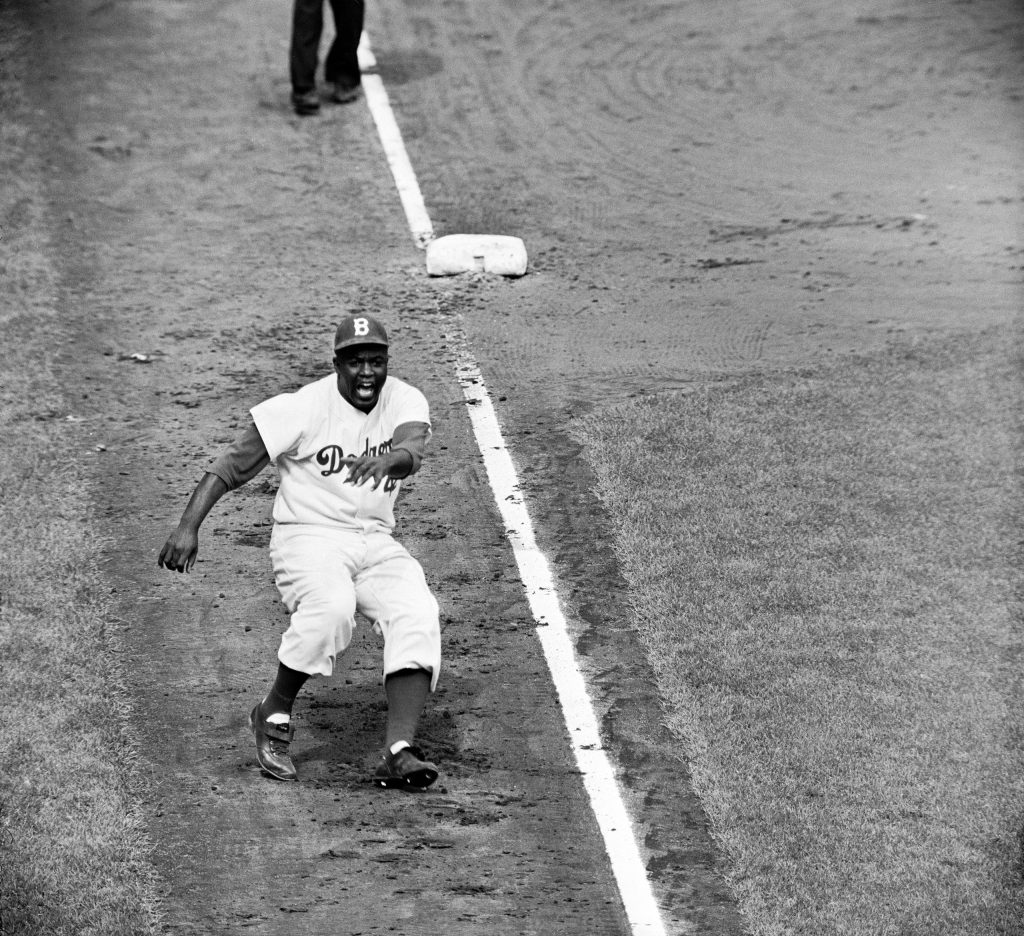 Hoping to distract Yankee catcher Yogi Berra and disrupt the pitcher, Bob Turley, Jackie Robinson dances off of third base during the third game of the 1955 World Series at Ebbets Field. 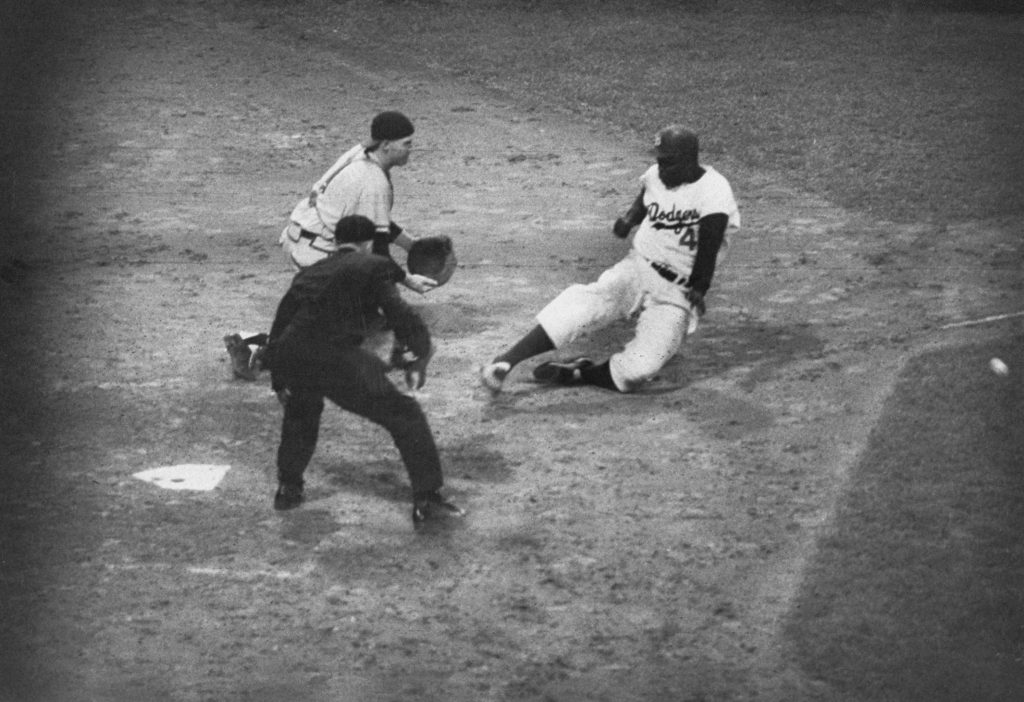 Jackie Robinson slid into home in 1956. 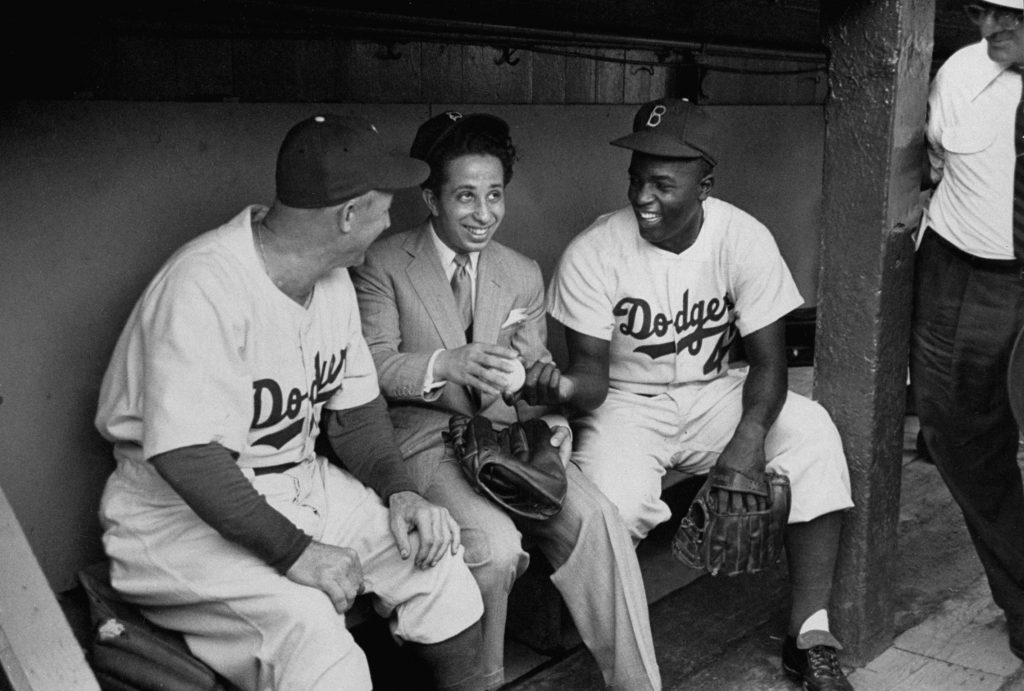 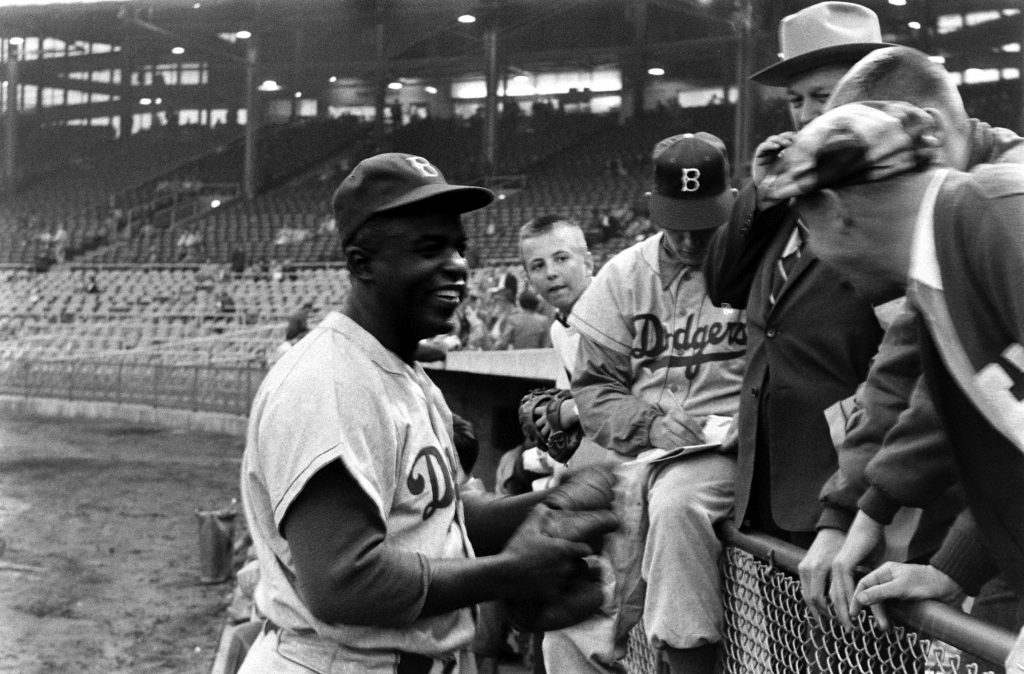 Jackie Robinson signed autographs and chatted with fans in 1955. 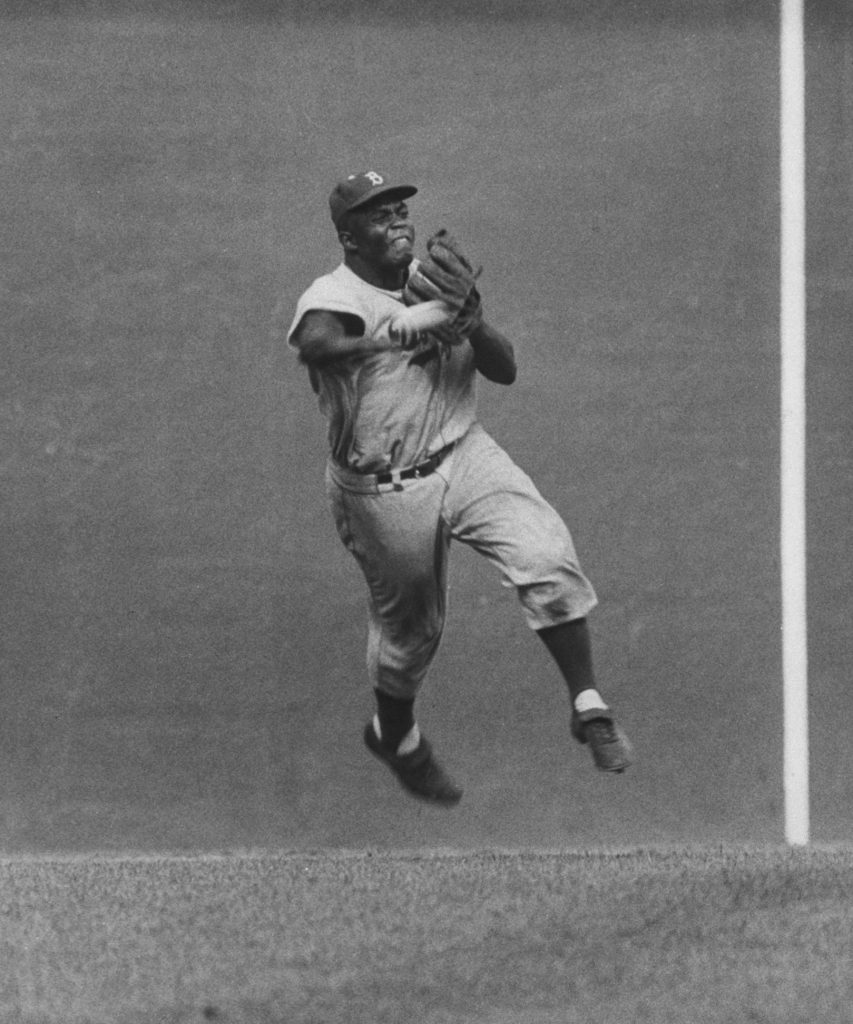 Jackie Robinson in action during game with the Giants, 1956 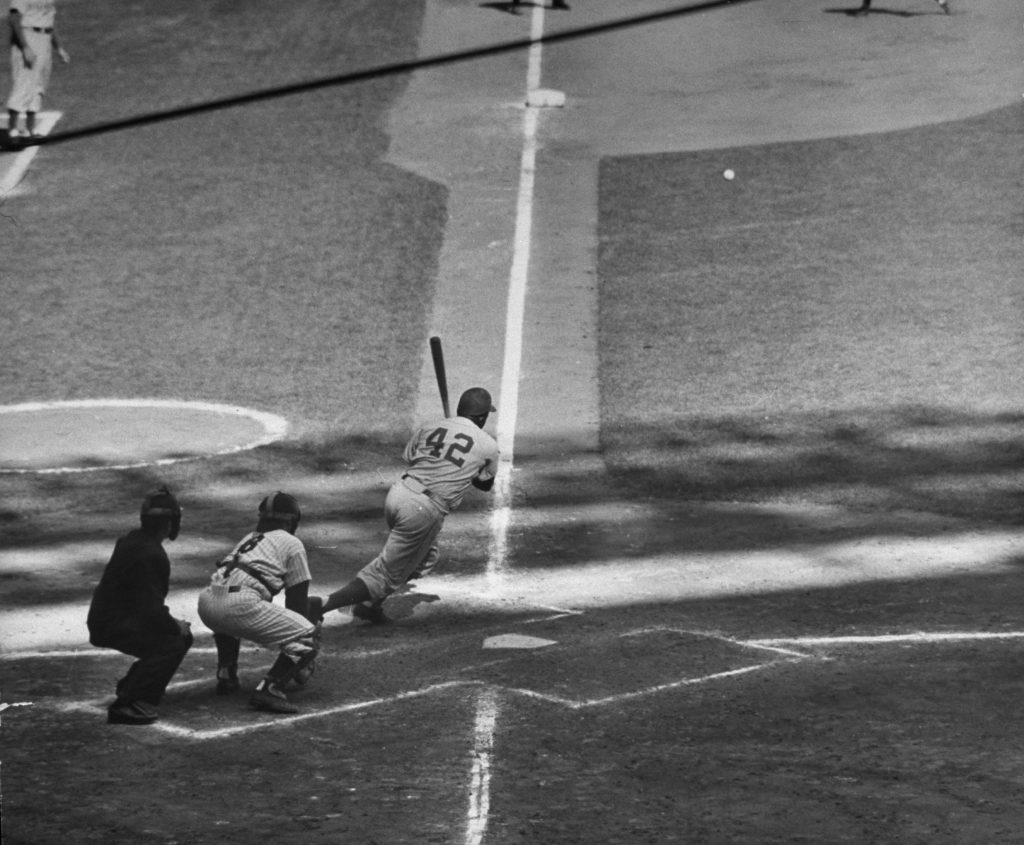 Jackie Robinson slashed a base hit during Game 6 of the 1955 World Series. 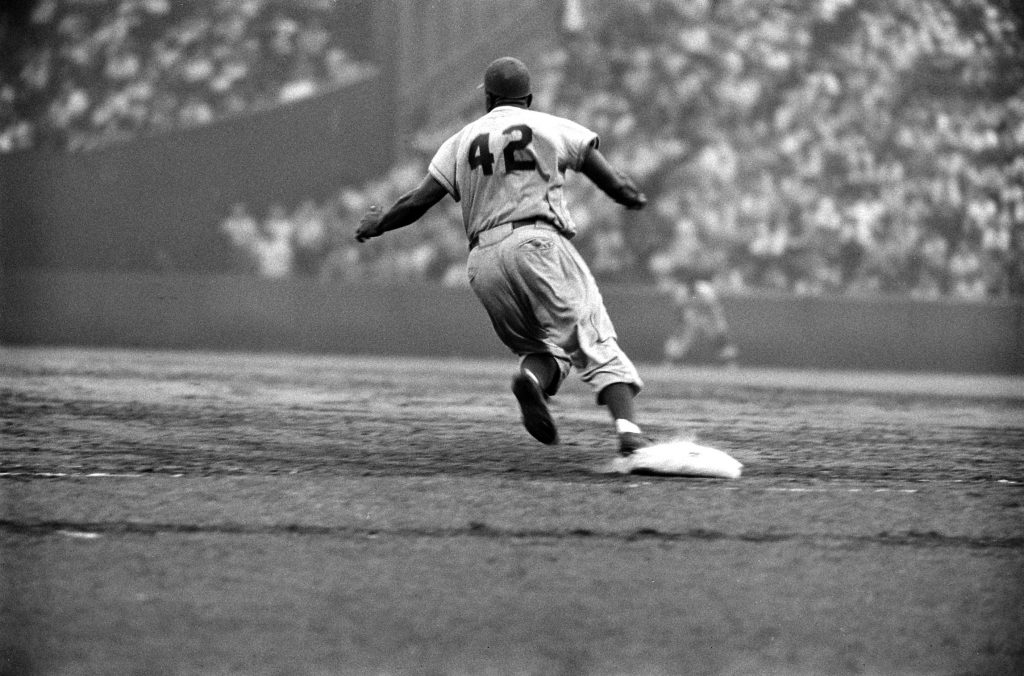 Jackie Robinson rounded first during a game against the Giants in 1956. 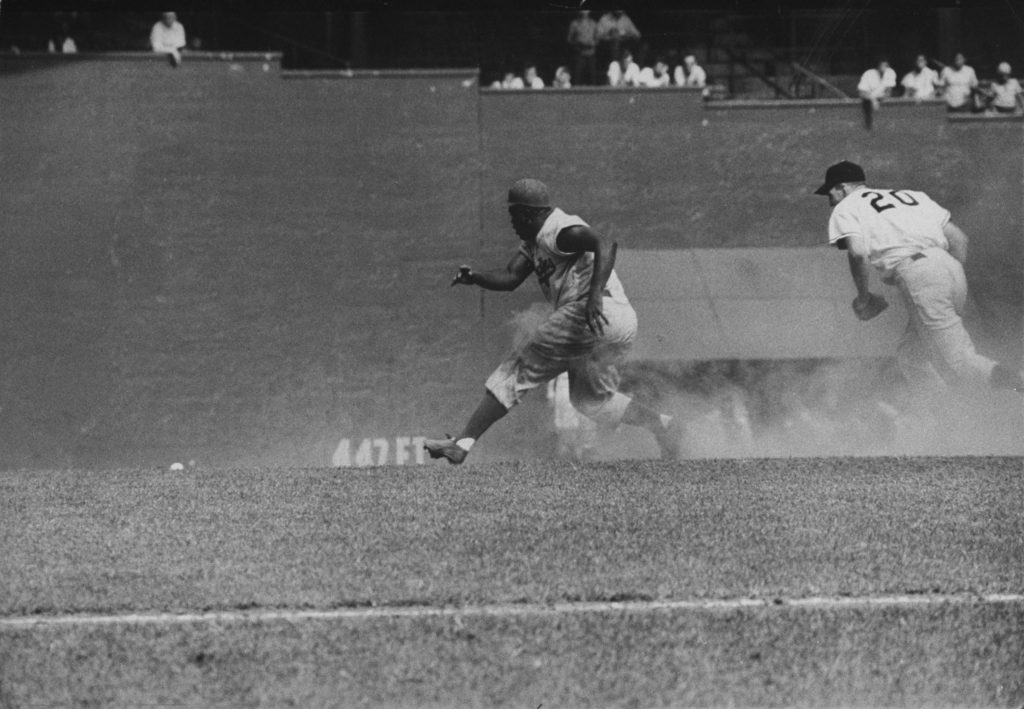 In 1956, his final season, Jackie Robinson bluffed for third after stealing second. 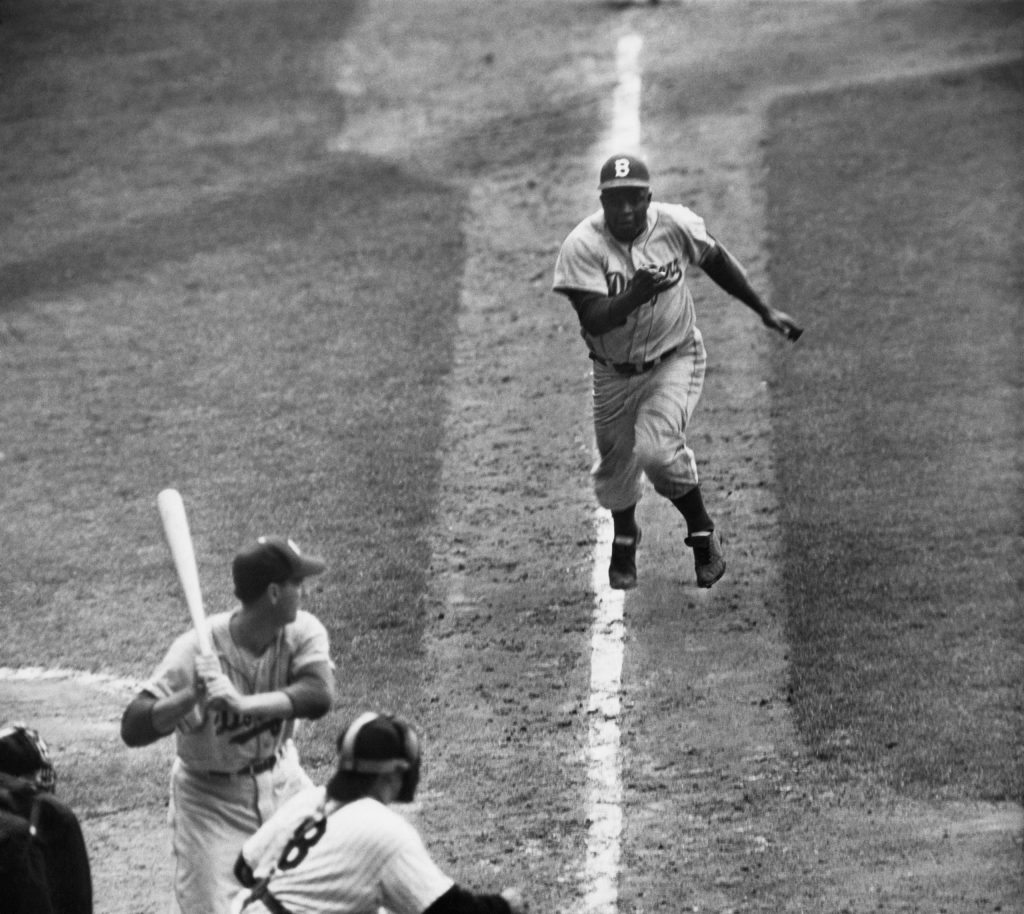 Jackie Robinson stole home plate in Game 1 of the 1955 World Series after Yogi Berra had just told the pitcher, “Don’t worry about Robinson.” 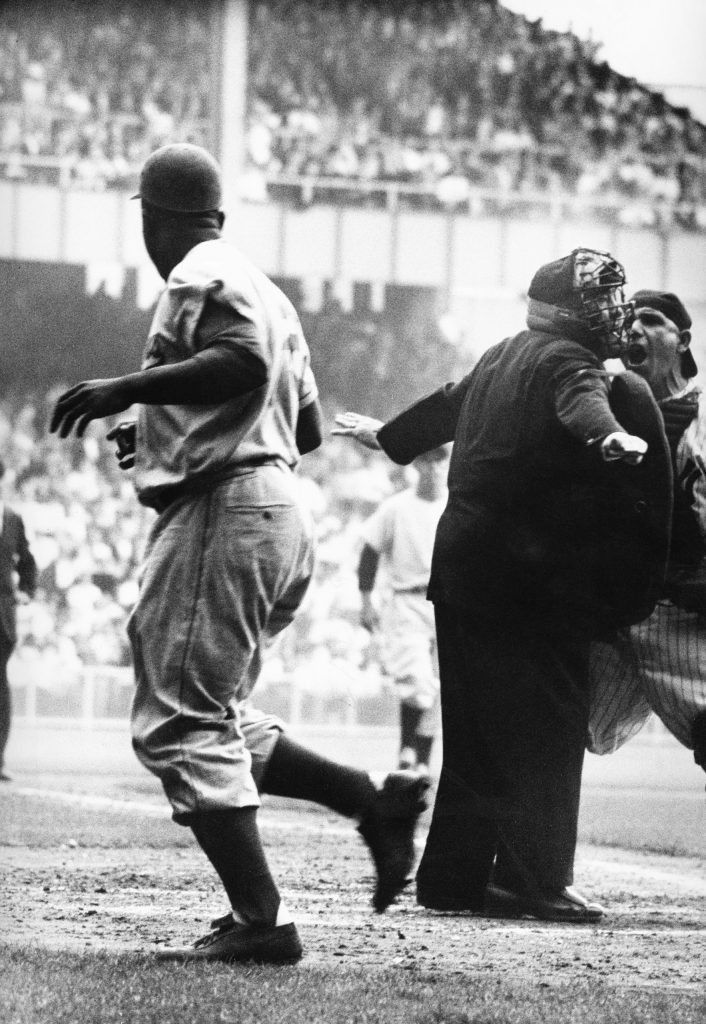 Yogi Berra took issue with the umpire’s “safe” call after Jackie Robinson’s electrifying steal of home in Game 1 of the 1955 World Series. Though the Yankees won the game and the Series, for years after, Berra continued to insist that Robinson was out on the play. 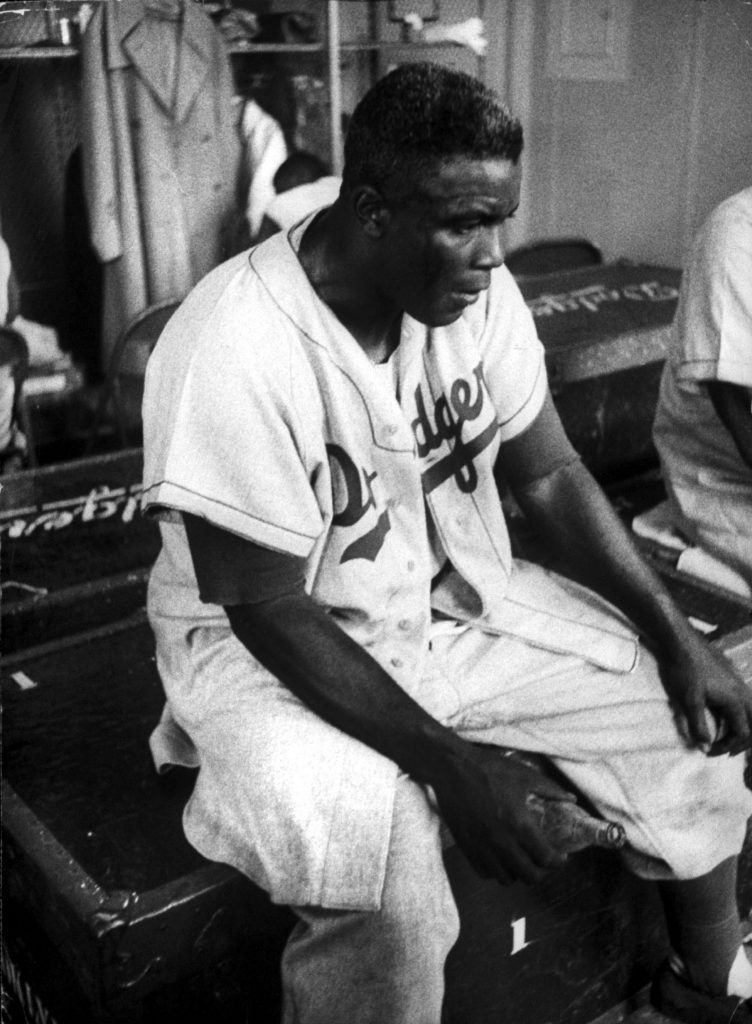