Winston Churchill at Leisure: Portraits of the Private Man

Winston Churchill stood in his studio at home, dressed in his RAF-blue siren suit while retouching one of his old landscapes.

Winston Churchill here obeyed his own injunction to amateur painters: ‘Audacity is the only ticket.’ His painting costume included a smock to protect his clothes and a 10 gallon Stetson, which he’d gotten years ago in California, to shield his head from the sun.

On May 10, 1940, as Hitler’s Germany was invading Holland, Belgium and Luxembourg, the British Conservative leader Winston Churchill took the reins of a coalition government after his predecessor, Neville Chamberlain, stepped aside.

Churchill would, of course, ultimately help lead England and the Allies to a brutally fought, costly victory over the Axis Powers in World War II. But in the early years of the conflict, England stood alone against the Reich after Nazi forces swarmed across border after border in Europe. Churchill’s defiance in the face of what seemed, at the time, an invincible Wehrmacht juggernaut earned the aristocratic, independent-minded PM his enduring reputation as one of the greatest war-time leaders in history.

Here, LIFE.com presents a selection of photos that portray Churchill the private man: painter, animal lover, country gentleman. The Churchill of these pictures is no less impressive, no less formidable than the man who so tenaciously defied Hitler during England’s darkest days. But there’s also a tenderness that adds to the great man’s singular, somewhat ornery charm.

As a reminder of Churchill at his greatest—at his most Churchillian—here are some deathless words from one of his most celebrated addresses, delivered early in the war, on June 4, 1940, and known ever since as the “We Shall Fight on the Beaches” speech. If more stirring words were uttered by any leader, Allied or Axis, during the Second World War, they’ve been lost to history. In phrases that range, brilliantly, from soaring to bracingly blunt and back again, Churchill lionized, galvanized and challenged the citizens of his “Island home” like no Briton before him or since.

“I have, myself, full confidence that if all do their duty, if nothing is neglected, and if the best arrangements are made, as they are being made, we shall prove ourselves once again able to defend our Island home, to ride out the storm of war, and to outlive the menace of tyranny, if necessary for years, if necessary alone. At any rate, that is what we are going to try to do. That is the resolve of His Majesty’s Government-every man of them. That is the will of Parliament and the nation.
“The British Empire and the French Republic, linked together in their cause and in their need, will defend to the death their native soil, aiding each other like good comrades to the utmost of their strength. Even though large tracts of Europe and many old and famous States have fallen or may fall into the grip of the Gestapo and all the odious apparatus of Nazi rule, we shall not flag or fail. We shall go on to the end, we shall fight in France, we shall fight on the seas and oceans, we shall fight with growing confidence and growing strength in the air, we shall defend our Island, whatever the cost may be, we shall fight on the beaches, we shall fight on the landing grounds, we shall fight in the fields and in the streets, we shall fight in the hills; we shall never surrender, and even if, which I do not for a moment believe, this Island or a large part of it were subjugated and starving, then our Empire beyond the seas, armed and guarded by the British Fleet, would carry on the struggle, until, in God’s good time, the New World, with all its power and might, steps forth to the rescue and the liberation of the old.” 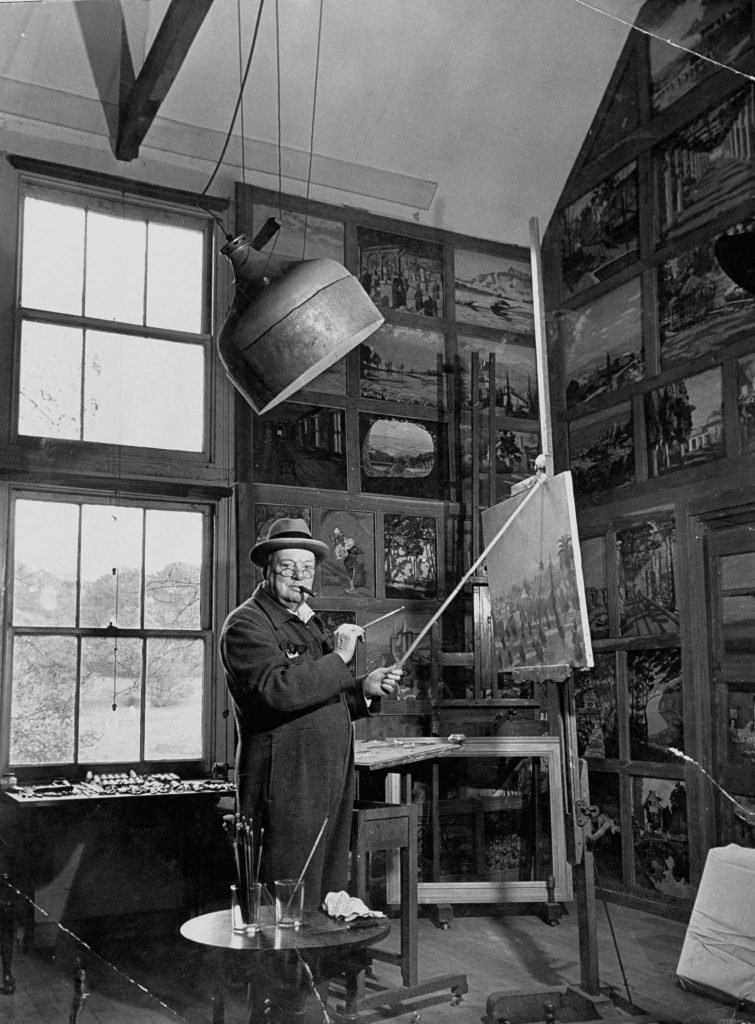 Winston Churchill stood in his studio at home, dressed in his RAF-blue siren suit while retouching one of his old landscapes. 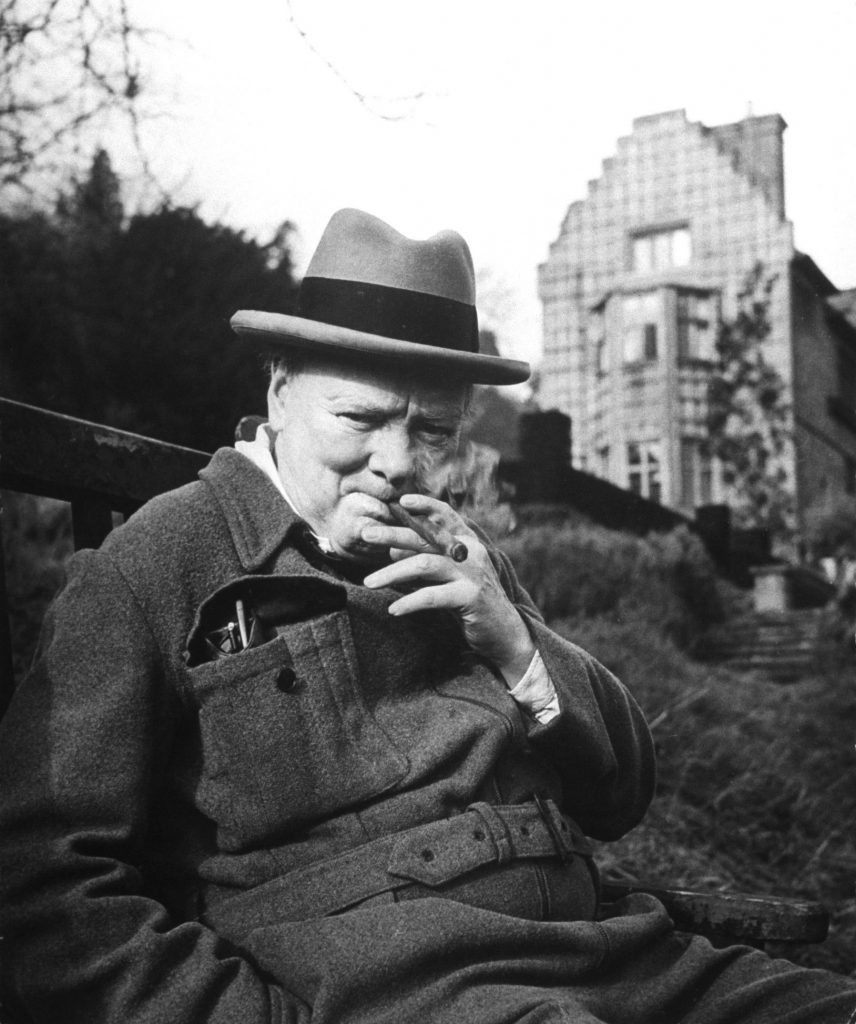 Winston Churchill and cigar at his Chartwell home in 1947 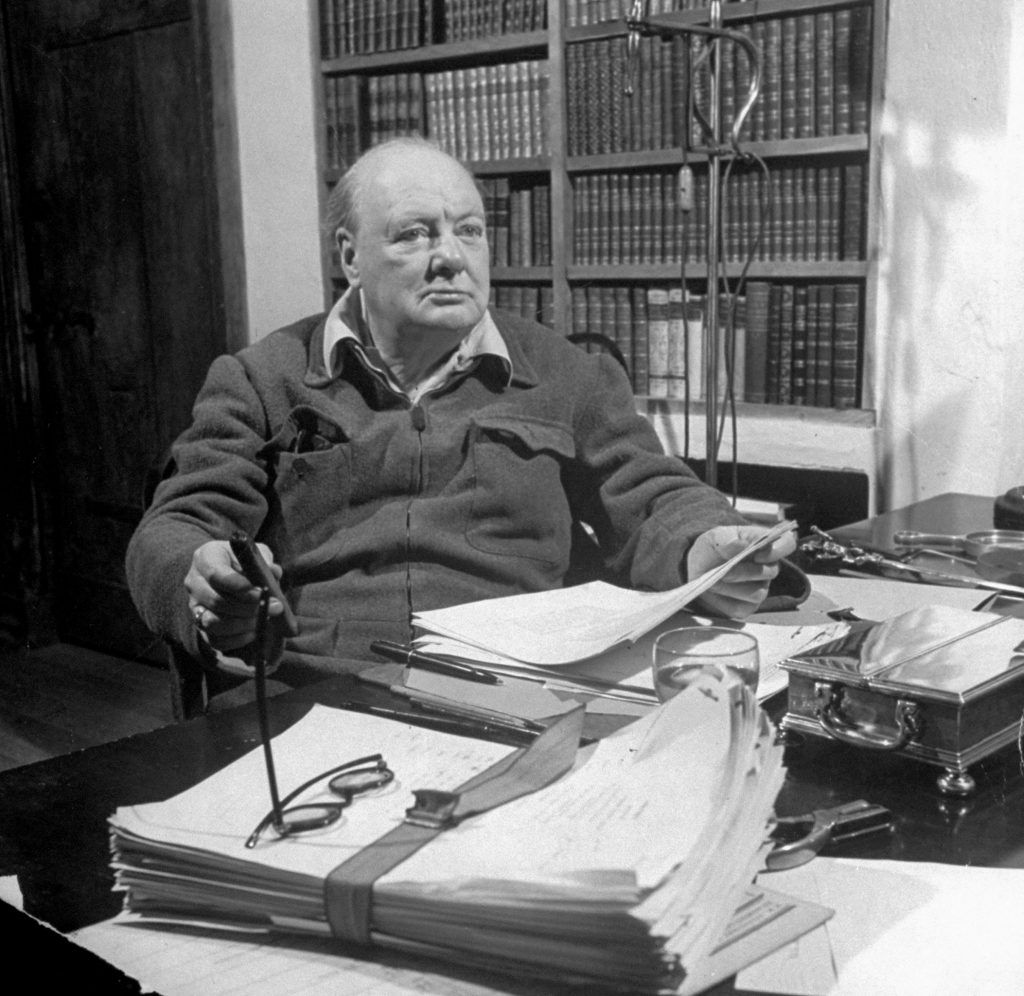 Winston Churchill at his desk working on his memoirs, March 1947. 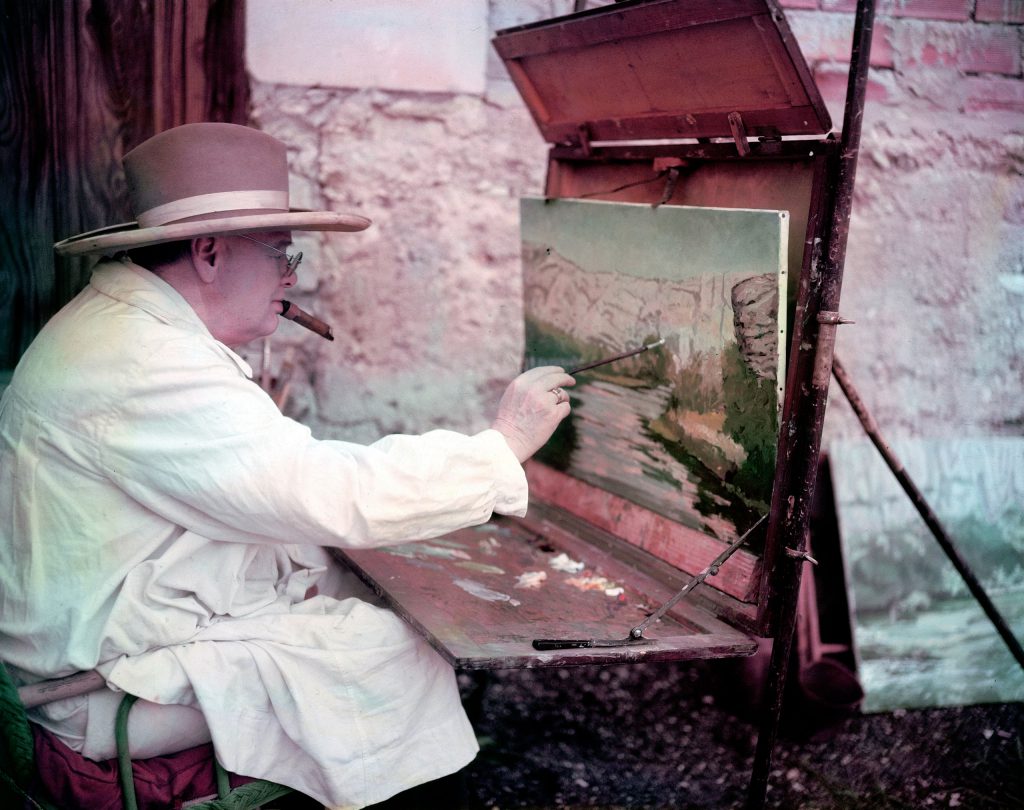 Winston Churchill here obeyed his own injunction to amateur painters: ‘Audacity is the only ticket.’ His painting costume included a smock to protect his clothes and a 10 gallon Stetson, which he’d gotten years ago in California, to shield his head from the sun. 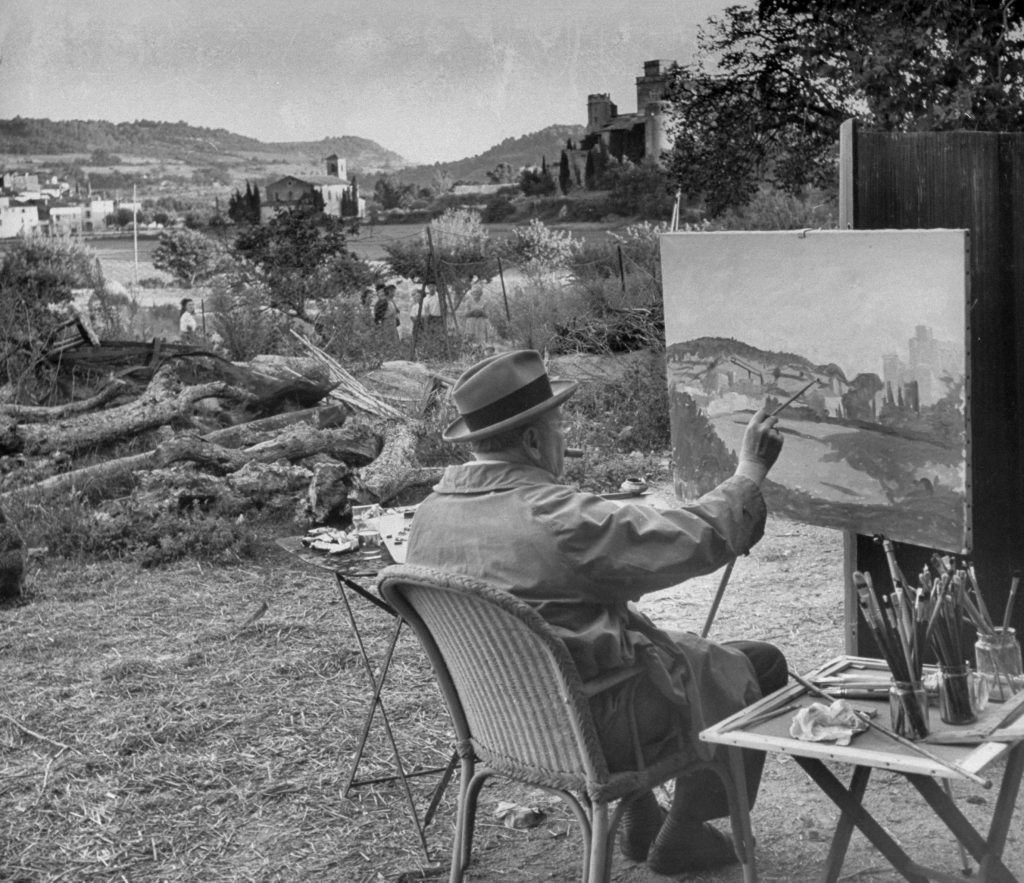 Winston Churchill painted and smoked a cigar near Aix-en-Provence, France. 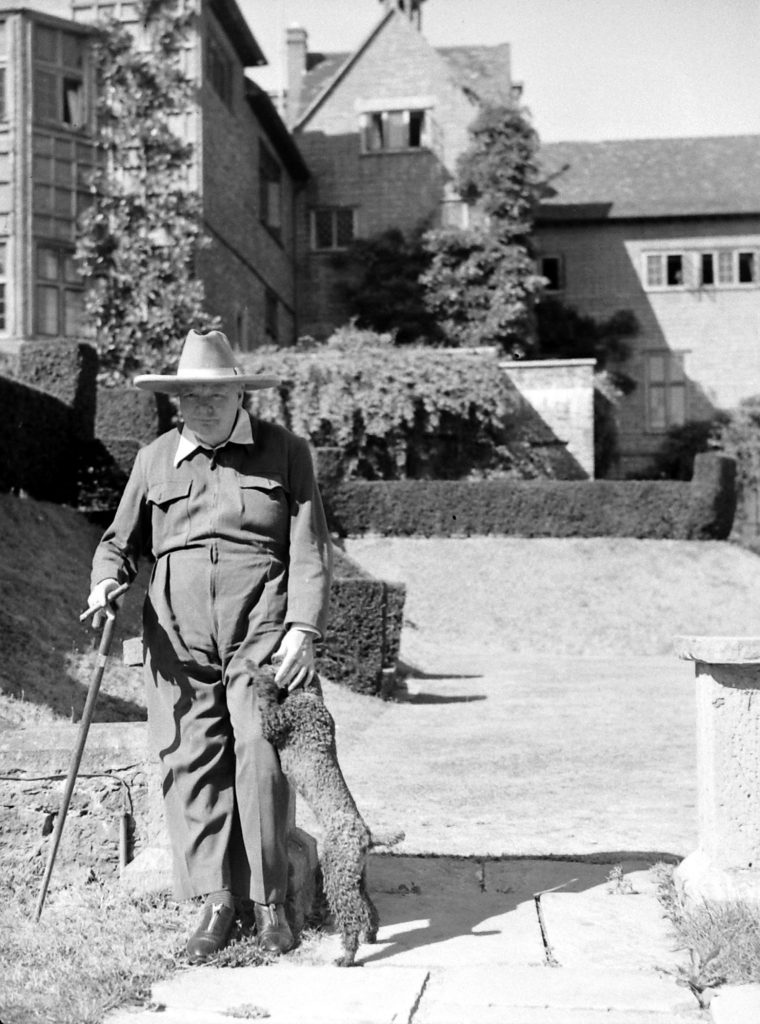 Winston Churchill and his dog, Rufus, at Chartwell in 1947. 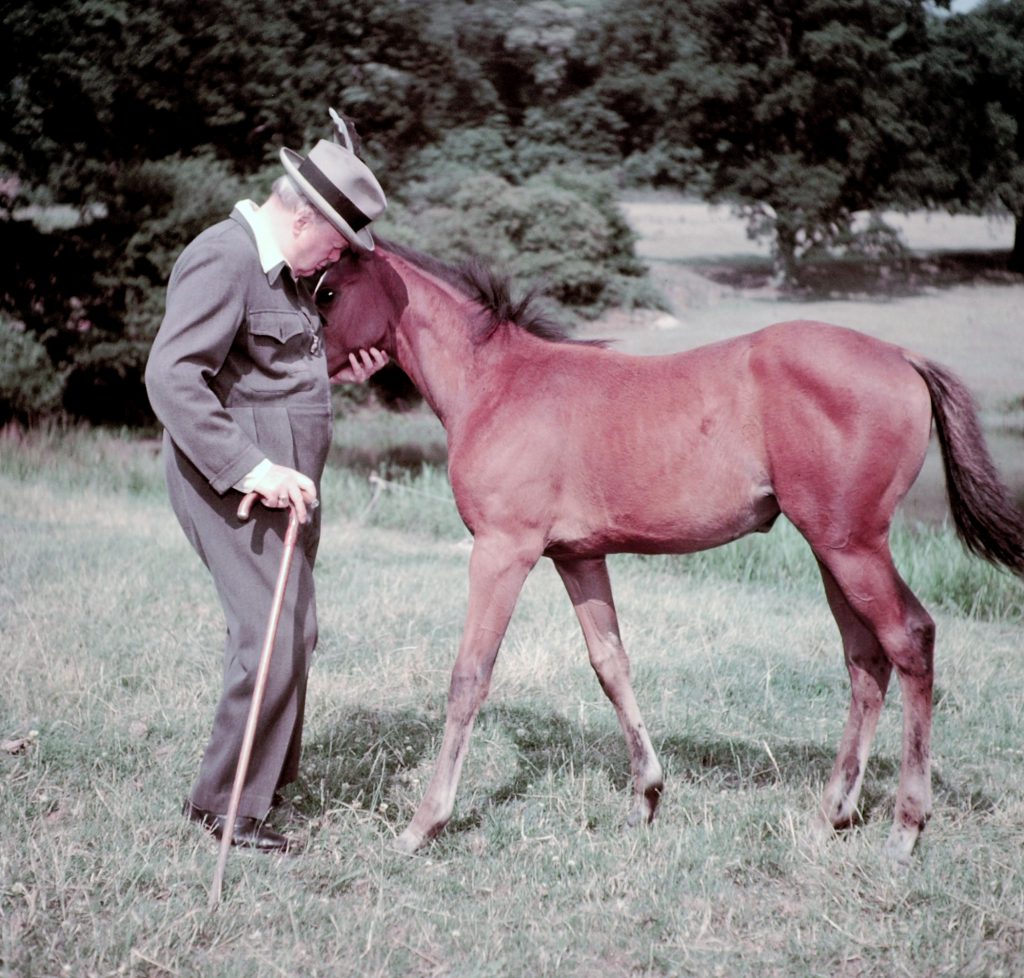 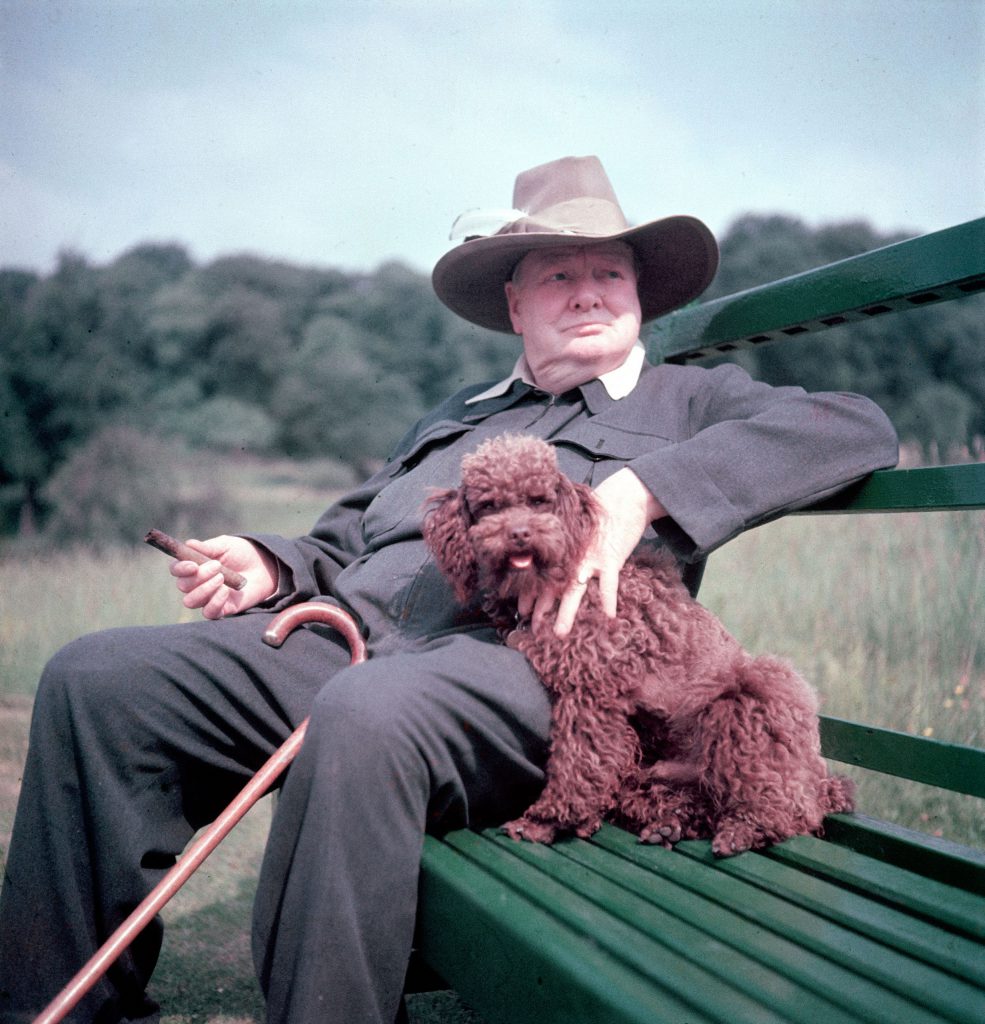 Winston Churchill and his dog, Rufus, at Chartwell in 1950. 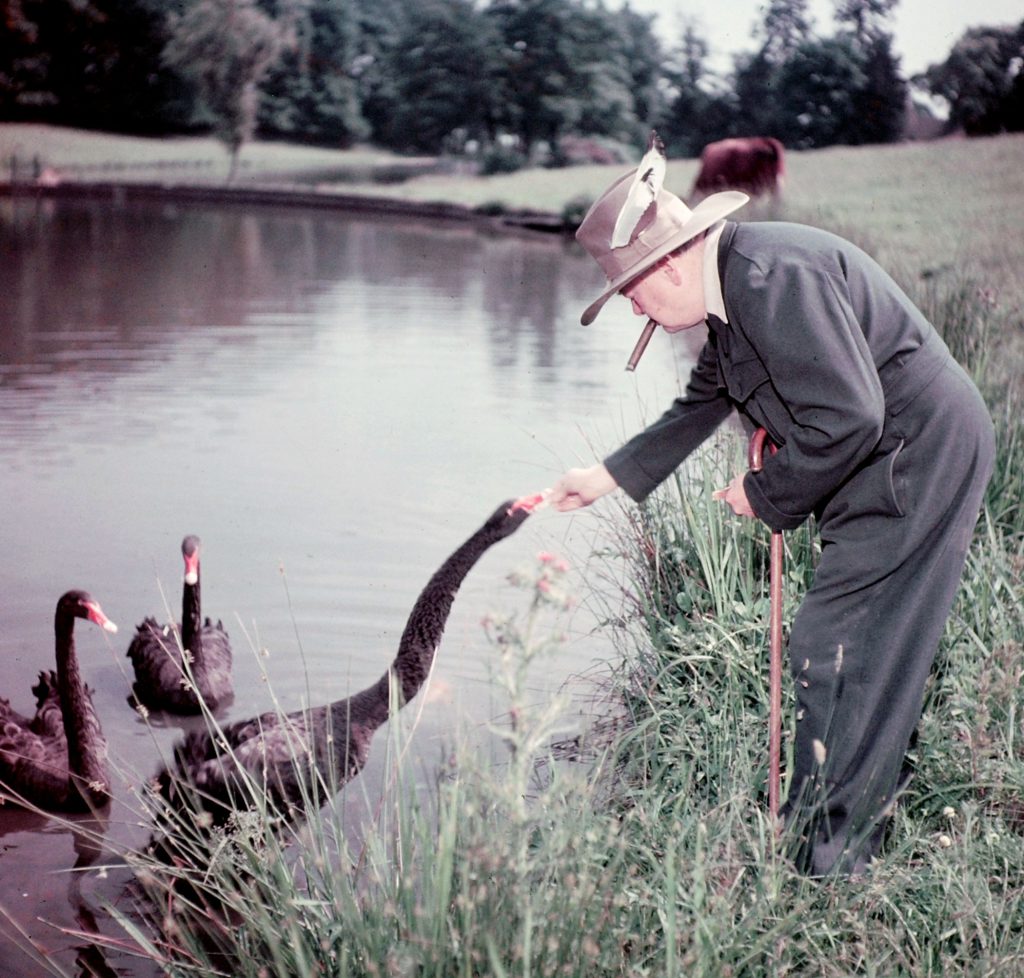 Winston Churchill and black swans—a gift from the people of West Australia—at Chartwell in 1950. 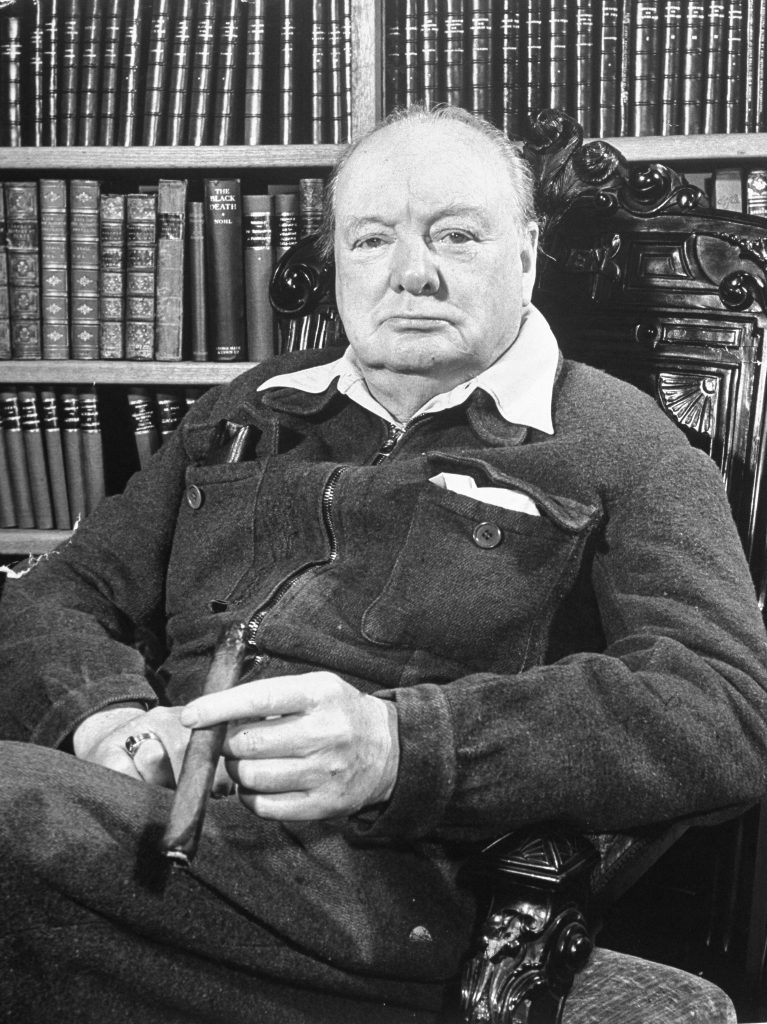 Winston Churchill in his study at Chartwell, Kent, in 1950.