On Tour With the First Miss Alaska

In 1958, with her home state about to be admitted to the Union (which it was, on Jan. 3, 1959) a 19-year-old woman, Stuart Johnson, from the Juneau area was named the first Miss Alaska and earned a spot in the Miss America pageant. In this bit of history a publicity agent saw an opportunity. He lined up a sponsor, Alaska Oil and Gas, and soon Johnson was on the way to New York to hit the media circuit before the pageant. With all the travel costs underwritten, her tour feels like a rough draft of what today’s aspiring social media influencers pursue on Instagram. Her ride certainly hit the heights. She stayed in a swanky hotel, wore beautiful clothes, made guest appearances on big TV shows and visited Yankee Stadium, and all the while LIFE photographer Peter Stackpole documented her adventures. Johnson, who’s name is now Stuart Sliter and who has been married for nearly six decades is 80 and lives in Juneau—her daughter, Beth Weldon, is the mayor. She recalls the New York trip as the adventure of a lifetime. 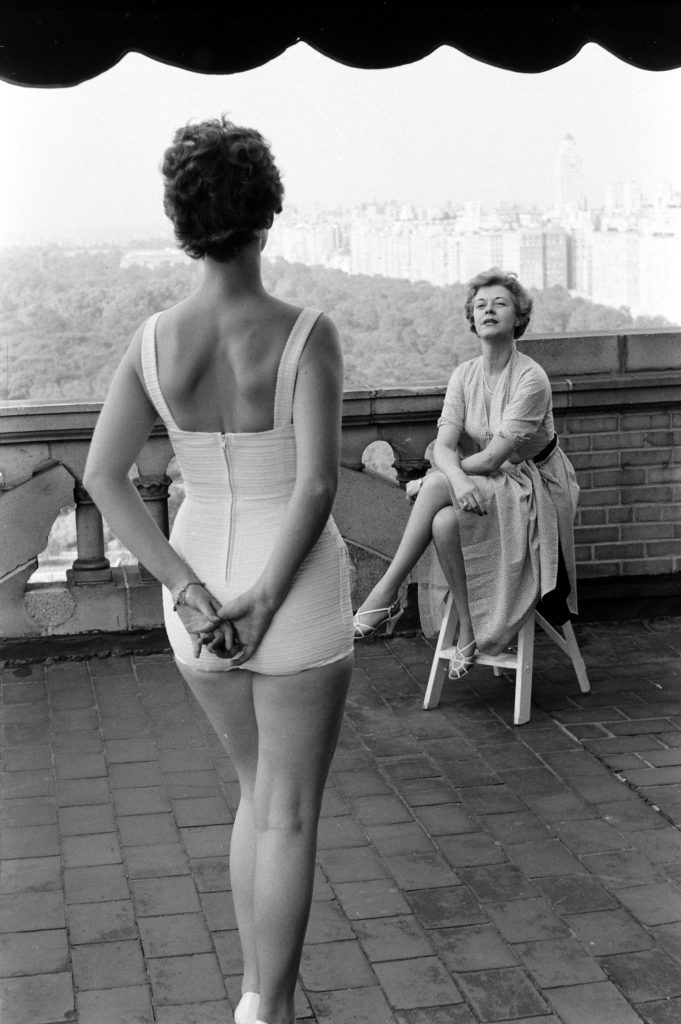 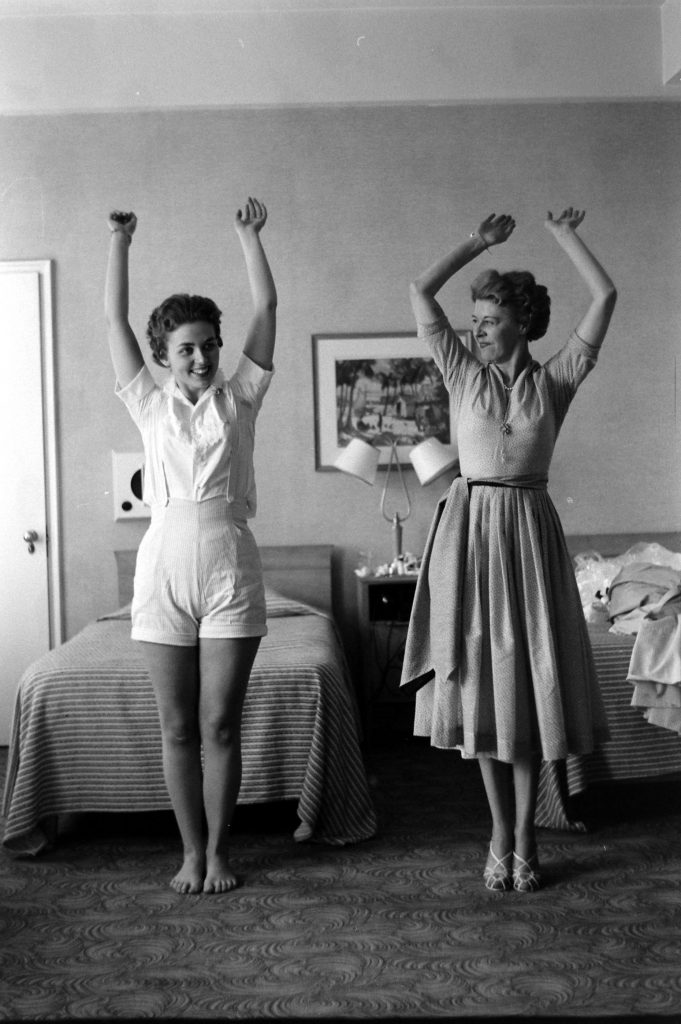 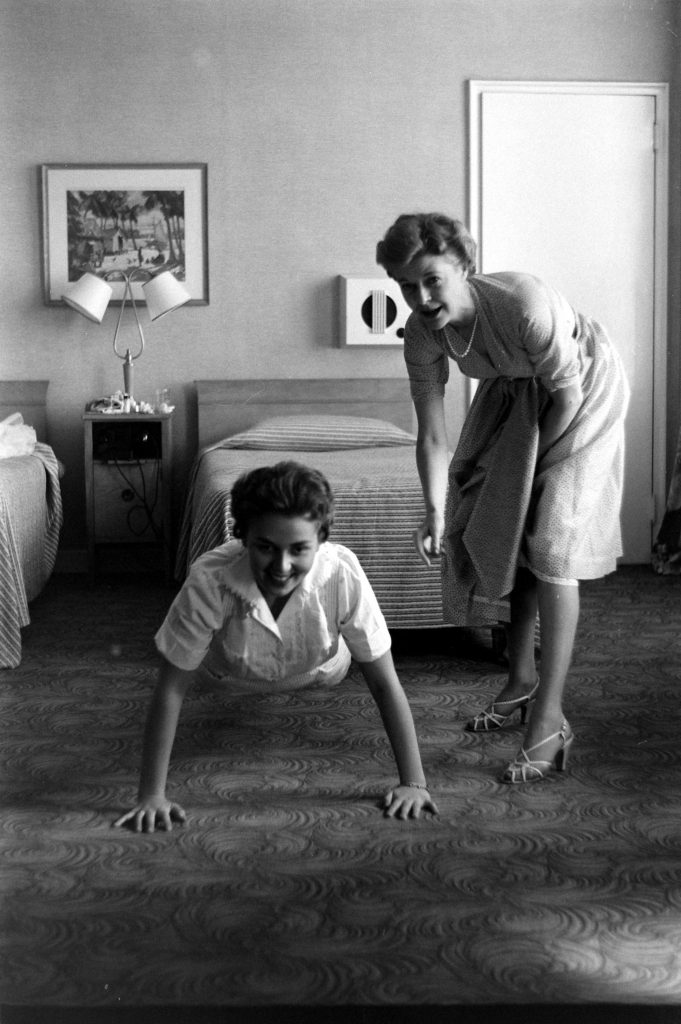 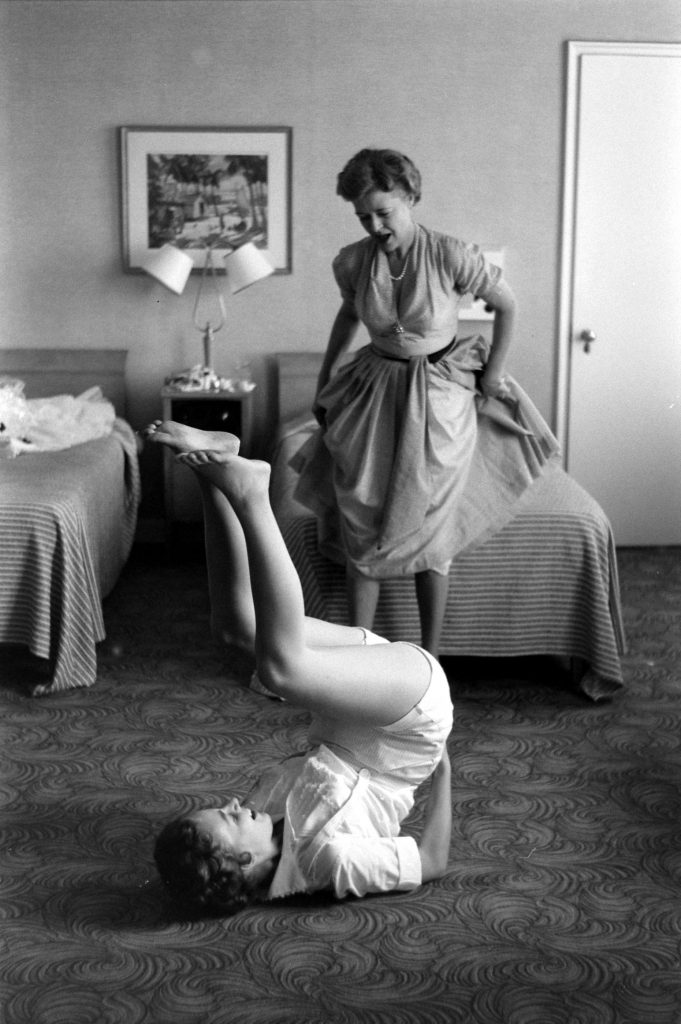 Johnson came from Douglas, a small community near Juneau, and she recalls the wonder of walking Manhattan’s streets surrounded by luminous buildings, and not being able to see the sky. She stayed in a room on the 23rd floor of the Hotel St. Moritz on Central Park South, where the above photos were taken. The shots may look like pageant preparation or part of a fitness routine, but Sliter says she was just playing for the camera. The other woman in the photos is Bea Albertson, who came along from Alaska to be her chaperone. 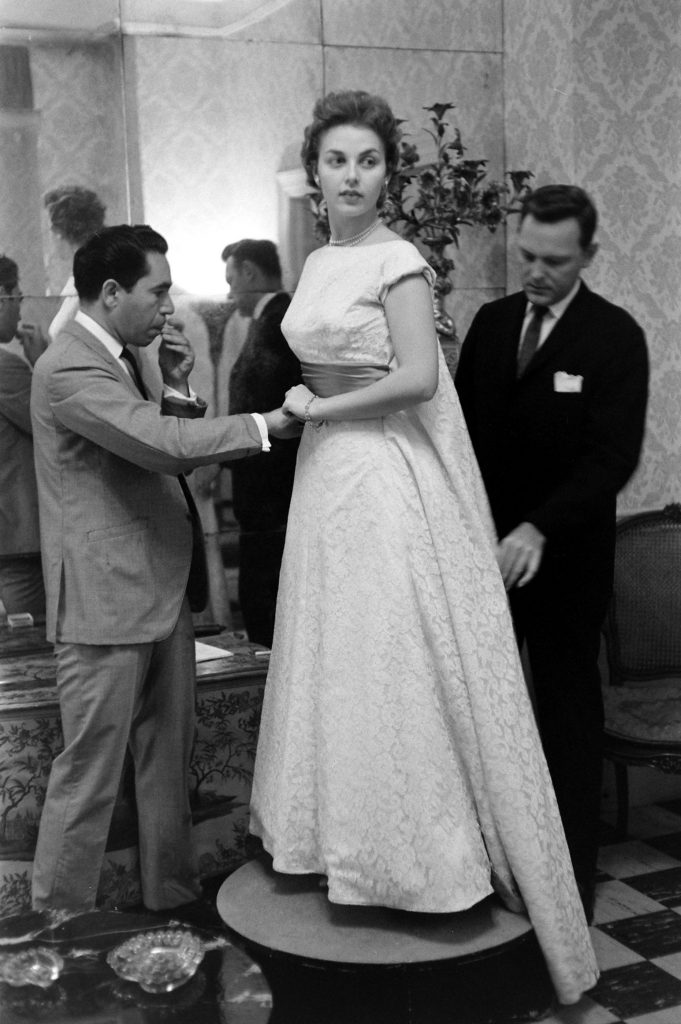 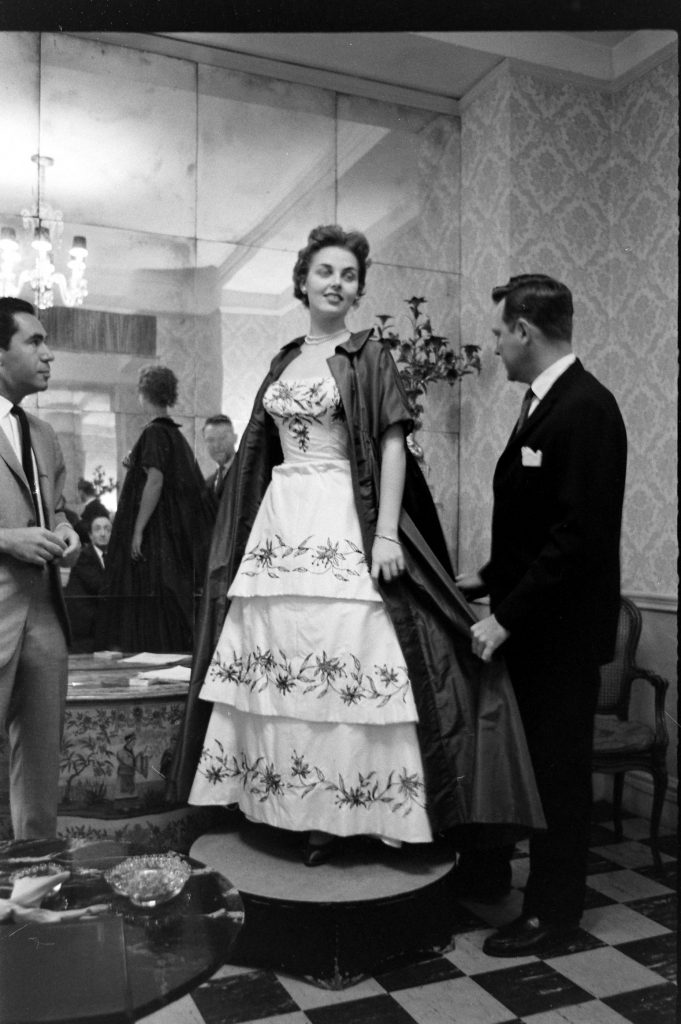 One of her favorite parts of the trip was going to a tailor’s shop to be fitted for her pageant gowns. “Just having a tailor work on your wardrobe was an amazing experience for any young girl,” she says. After the trip, Johnson receiving a note from Stackpole, praising how photogenic she was. 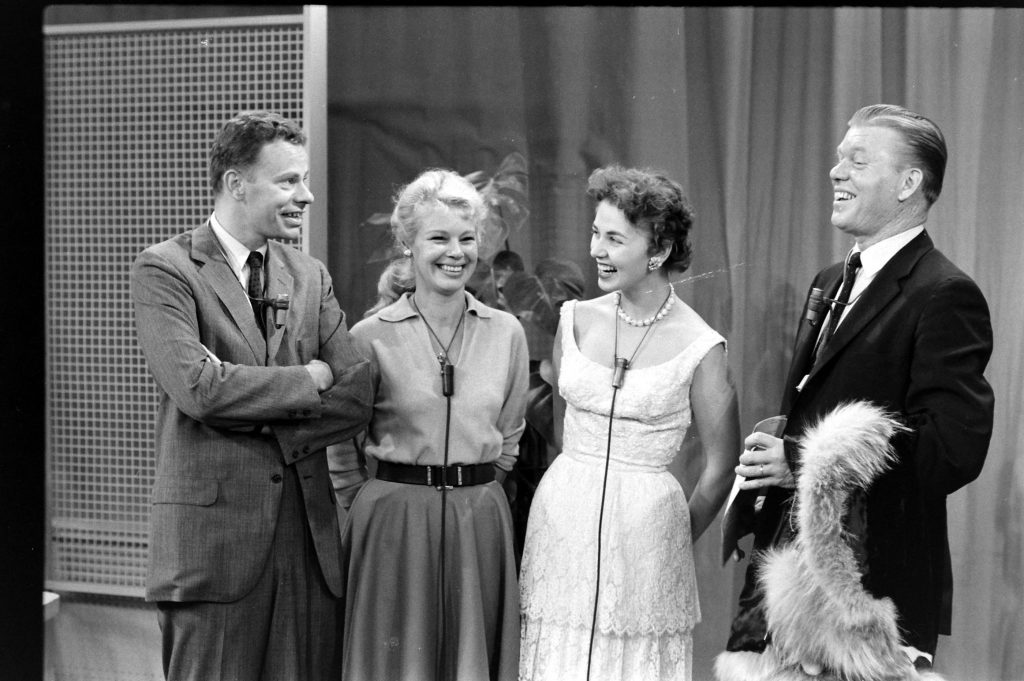 On her media tour, Johnson played the role of ambassador for the 49th state. She visited the Today Show and met host Dave Garroway (right) and also Charles van Doren (far left), who is now most remembered for his role in the quiz show scandals. She also appeared on the Tonight Show with Jack Paar, American Bandstand with Dick Clark and on The Ed Sullivan Show, where she hobnobbed backstage with Walter Cronkite and Pearl Bailey. During her appearances she carried with her ta small totem pole, a prop given to her by her publicity team. She describes her TV appearances as “cameos” which often involved answering silly Alaska-themed questions. More than once she was asked, “Do you live in an igloo?” Her main memory from the Today Show appearance: “The dress, they couldn’t zip up the back, so they told me, don’t turn your back to the camera, just sit there and smile.” 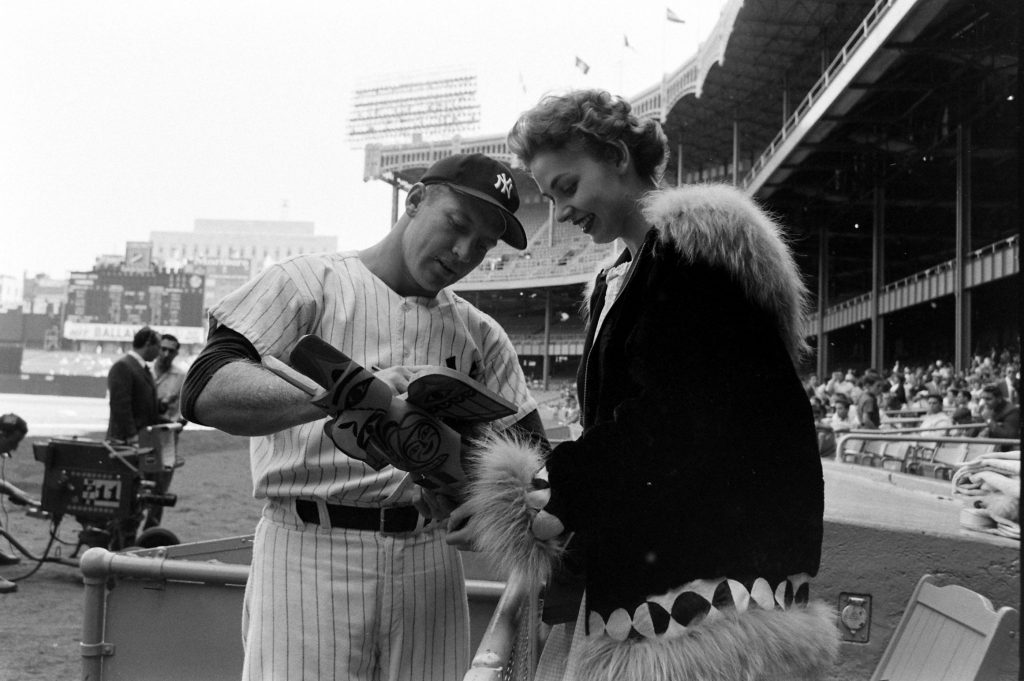 Johnson’s tour included a visit to Yankee Stadium, where manager Casey Stengel and outfielder Mickey Mantle signed her totem. A third pinstriped Hall of Famer, Yogi Berra, was supposed to meet her as well, but Johnson was ten minutes late to the park and Berra, tired of waiting, saw a fork in the road and took it. Other stops on her tour included the Statue of Liberty and a show with the Rockettes, and also night spots such as Toots Shor’s and the Copacabana.  After the pageant—won by Miss Mississippi (and future actress) Mary Ann Mobley—Johnson completed a degree in education from Mills College in Oakland, and she became a teacher and also a mother of three children, including Mayor Weldon. The autographed totem from that trip is displayed on the mantel in her living room. (Yes, she has Mantle on her mantel). Of that trip to New York, Sliter says, “It’s my Cinderella story.”