Joe Kittinger: The Man Who Fell to Earth

On August 16, 1960, 32-year-old U.S. Air Force Capt. Joe Kittinger ascended in a helium-balloon-tethered gondola to 102,800 feet (roughly 19 miles) above the Earth … and jumped. His free-fall lasted 4 minutes and 36 seconds. He experienced temperatures approaching minus-100 degrees Fahrenheit. As he fell, Kittinger neared the speed of sound, his pressure-suit-encased body traveling at more than 600 mph before he opened his parachute at around 14,000 feet. To this day, incredibly, he still holds records for highest parachute jump and longest-ever free-fall.

Captain Kittinger’s adventure was chronicled, at the time, in the pages of LIFE. But it was the image that graced the cover of the August 29, 1960, issue of the magazine of a green-clad Kittinger tumbling through the ether above a clean, white blanket of clouds that immediately and forever brought home the sheer audacity of his leapfrom the edge of space.

Today, it’s striking to look back and realize just how powerful a single, still photograph can be, and how many emotions it can stir, so many years after the event.

For Kittinger himself, the memory of his jump, and of his appearance on the cover of LIFE, remains startlingly fresh.

“I was eight years old when LIFE magazine was first published,” Col. Kittinger (Ret. USAF), now 84 years old, told LIFE.com. “I remember, so clearly, that my folks received a copy of LIFE every week. I religiously thumbed through every issue, keeping up with happenings all around the world. The photos were always so remarkable. But I could never have dreamed that one day, I would be on the cover. What an honor that was! To this day, I still get requests from people around the globe, asking for my autograph on that very cover.”

But beyond Kittinger’s recollections, there is the sense of wonder that anyone with even a modicum of imagination can embrace, looking at that picture of a human form hurtling toward the planet’s cloud cover miles below. The one image, snapped by an automatic camera perched in the gondola out of which Kittinger had just stepped, captures so many aspects of human endeavor that it bears repeat viewings. One might even say, repeat encounters.

The jump, after all, undertaken in the name of science, is an emblem of our pursuit of knowledge not as something dry and purely academic, but as adrenalized thrill-ride.

It’s also a snapshot of a life at the moment of supreme fulfillment. Joseph Kittinger dreamed of flying ever since he was a young boy in Florida. That he was the one human in a position to make that leap and that he wanted to make the leap speaks to a confidence and a faith in one’s team (scientists, engineers, fellow pilots) that verges on the awesome. Most of us have trouble falling back into the arms of friends and colleagues during “trust exercises” here on the ground; Kittinger’s trust was absolute and unwavering. His life, literally, depended on that trust being warranted. And it was.

Finally, and simply, the image on the cover of LIFE is just a breathtaking picture. One thinks, inevitably, of Icarus’ fall through an ancient sky while celebrating Kittinger’s far happier fate. That a man had the will to step from that gondola, so many miles above the Earth, with a hope, but absolutely no promise, of having it all end well suggests that as a species we’re perhaps braver than we sometimes give ourselves credit for. Or some of us are, anyway. And as long as some of us are, then the sky is no limit. 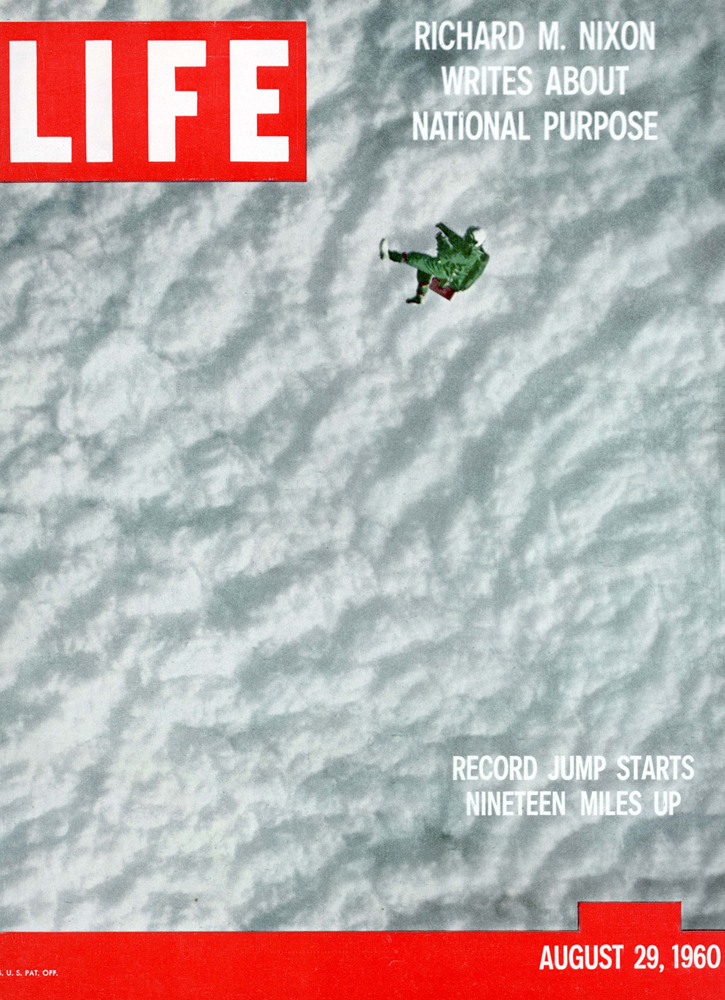