Londoners slept in the city's Underground for protection during German bombing raids, 1940.

Londoners slept in the city’s Underground for protection during German bombing raids, 1940.

London’s monumental Metropolitan Railway opened on January 9, 1863, and the very next day the general public was permitted to ride the trains for the first time. The dauntless and, for Victorian England, remarkably democratic nature of the undertaking ensured that a great city’s restless, striving population would be able to move about the metropolis in an utterly new, bracing fashion—and nothing about London, or about urban transportation anywhere, has ever been quite the same since.

The Underground runs on 250 miles of track, almost half of which is, in fact, underground, and carries more than 3 million passengers every single day. For decades, it has played a central role not only in the daily lives of Londoners, but—like Big Ben, Tower Bridge and other landmarks and architectural marvels—has shaped non-Britons’ ideas of what London is. What it looks and feels like. The Tube has starred in books, movies and song. It is a cultural as well as an engineering touchstone, and was the model for virtually all the great subways that came after it.

In 1940, however, during the eight months of German bombing raids known ever after as the Blitz, the Tube witnessed what was (to borrow a phrase from Winston Churchill) its finest hour. As Luftwaffe bomber planes pummeled London and other British cities, often sparking urban fire storms that raged for days and, by the time the raids stopped, killed tens of thousands of civilian men, women and children, countless Londoners and people from the outskirts of the city sheltered every night far below, on the platforms of Underground stations.

The Hans Wild photograph here—which ran in the Dec. 30, 1940 issue of LIFE above the caption, “In cold and discomfort far below the hell above, London tries to sleep in its deep subways”—this Wild photo is a testament to what Churchill, in his inimitable way, called “the courage, the unconquerable grit and stamina” of the English. But there is nothing terribly romantic, high-minded or even noble about shivering a night away while an enemy tries to kill you, or lays waste to your city, or both.

There might be romance and nobility in that sort of scenario in retrospect, but even the most unconquerable and grittiest of Londoners would likely admit, by the fall and winter of 1940, that the core emotion most of them endured day and night was an anxiety that often veered into deep, chilling fear. But again, we’re all aware that true courage is not the absence of fear, but doing what needs to be done in the face of one’s fear. And by that definition, Churchill’s refrain — courage, grit, stamina — does, in fact, seem to neatly characterize the actions and the attitude of the English throughout the Blitz, and throughout the entire war. England was, after all, virtually on its own by December 1940, holding off a “Thousand-Year Reich” that had swept through western Europe with appalling ease. Britons were the last of the unconquered — until America entered the war almost a full year later, after Pearl Harbor, and the Axis tide truly began to roll back.

Finally, it’s worth noting that one of the single deadliest and most destructive Luftwaffe strikes against London happened on the night of December 29, 1940—one day before the date of the issue of LIFE in which Wild’s photo appeared. That night, German planes dropped thousands and thousands of incendiary and high explosive bombs on the English capital, destroying the center of London and setting off a firestorm so intense and terrifying it came to be known as the Second Great Fire of London.

As the fires raged, men, women and children huddled in multitudes down below the surface of the city, in the tunnels carved out a century before by a civilization that could not have imagined a bomber plane, much less the destructive power that one such plane could unleash in a single night. In a sense—a very real sense—the Tube saved London during the Blitz. For that alone, we should celebrate the Underground, as well as the vision that brought it to loud, tumultuous—and yet somehow very organized, very orderly, very English—life. 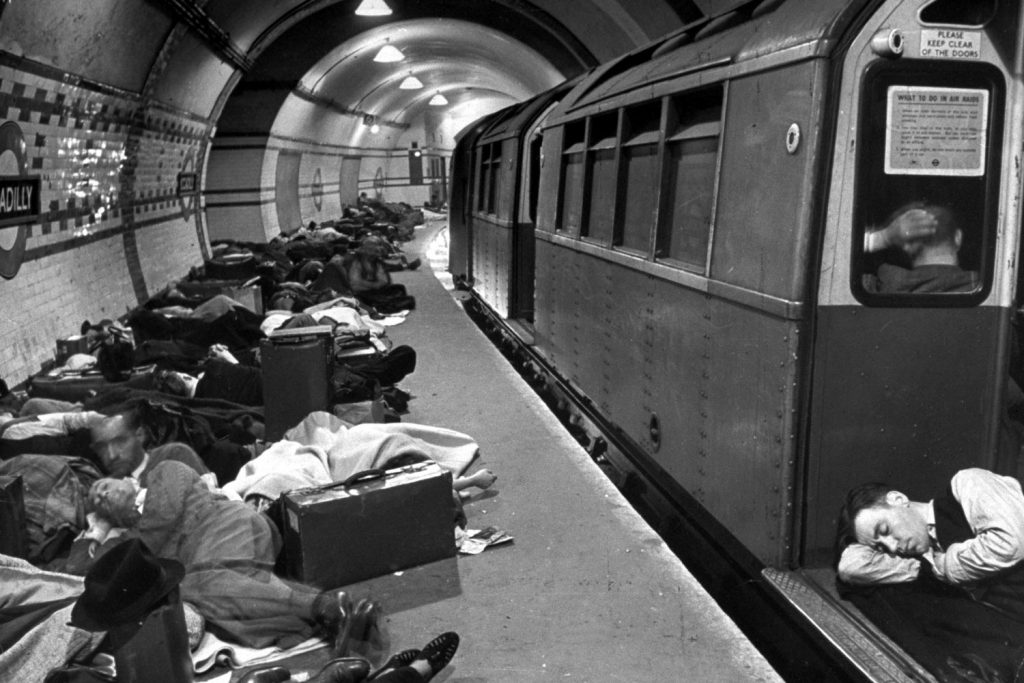 Londoners slept in the city’s Underground for protection during German bombing raids, 1940.