The Amazing Lunar Module: From Early Models to the Moon

Apollo 9, March 1969. On the fourth day of the mission, astronaut David Scott stood in the open hatch of the command module and scanned the blue earth below.

Artists and engineers share this bond: their visions are often first embodied in rough, rudimentary form. Whether it’s a sculptor working in clay or an industrial designer using three-dimensional software, modeling is not just part of the creative process: to a large degree, it is the creative process.

For NASA’s engineers, finding ways to model the remarkable craft that would not only land astronauts on the moon, but would allow them to lift off from the lunar surface, rendezvous and link up with an orbiting vessel and return safely to Earth and their families well, tackling that sort of challenge is the reason so many of the best and brightest join NASA in the first place.

Here, LIFE.com offers a series of images celebrating the various Lunar Excursion Modules—scale-model and life-size—that NASA built through the years; the men who flew them; and the brilliant, daring minds that envisioned the extraordinary spacecraft in the first place.

First deployed during Apollo 9’s 10-day mission in March 1969, roughly 100 miles above the earth, and tested again a few months later, less than 10 miles above the lunar surface during Apollo 10’s “dry run” for the July 1969 moon landing, the various versions of the lunar module that NASA designed and produced represent, in microcosm, pretty much everything technological that got people excited about the American space program in the 1960s.

After all, behind the craft’s complex development is an audaciously straightforward idea—enter moon’s orbit; separate from command module; land on moon; lift off from moon; reconnect with command module; come home—that would take years of effort (and not a few mistakes) to finally put into triumphant, era-defining practice.

In July 1969, when Apollo 11’s rendition of the LEM, Eagle, touched down on a vast lunar plain named Mare Tranquillitatis, or the Sea of Tranquility, centuries before by two Italian astronomers Neil Armstrong radioed a simple, momentous phrase to Mission Control a quarter-million miles away in Houston.

“The Eagle has landed,” he said, cementing the lunar module’s central role in one of humanity’s greatest dramas. 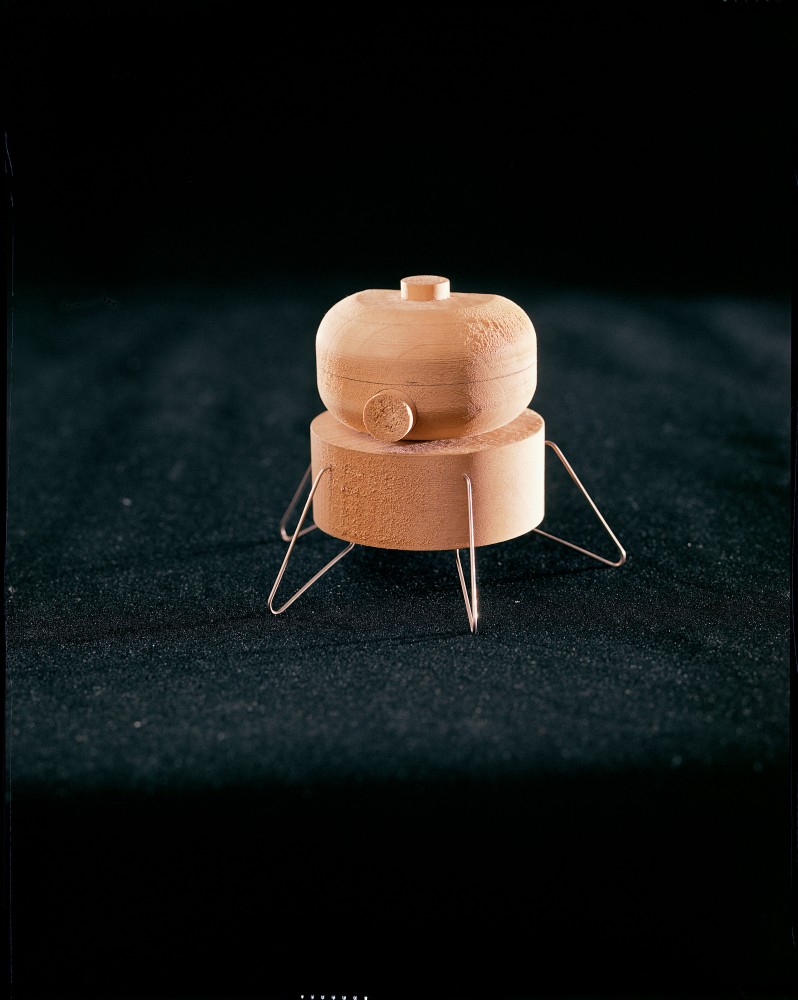 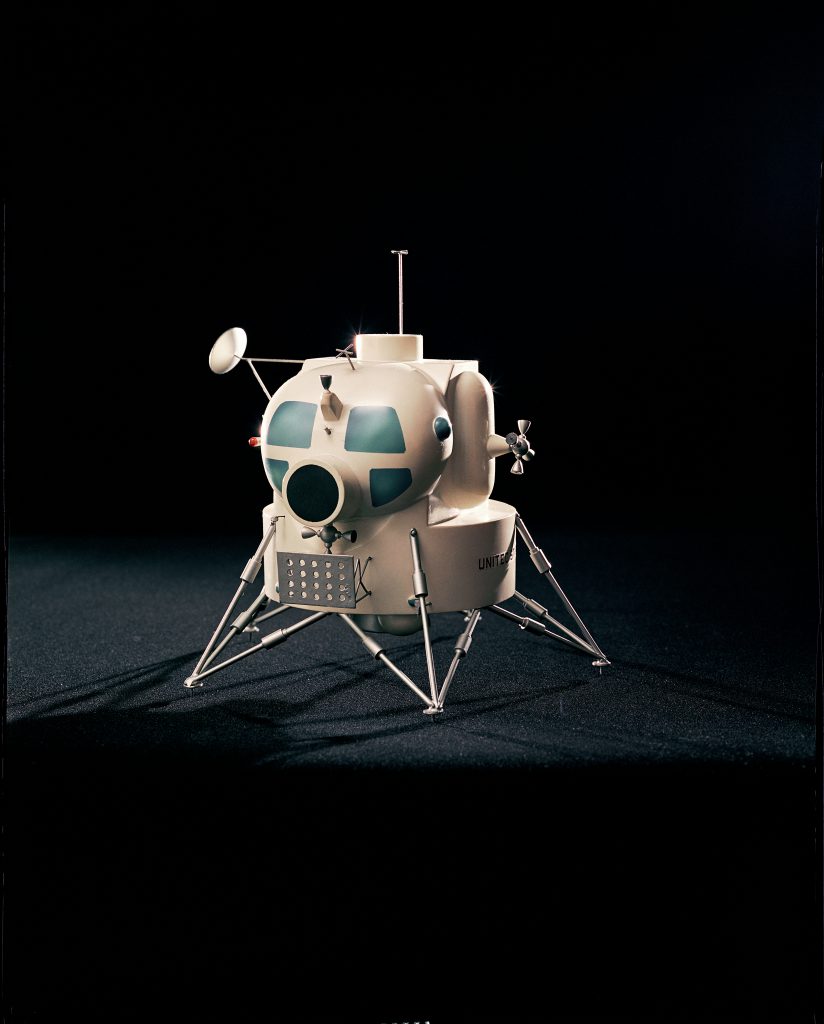 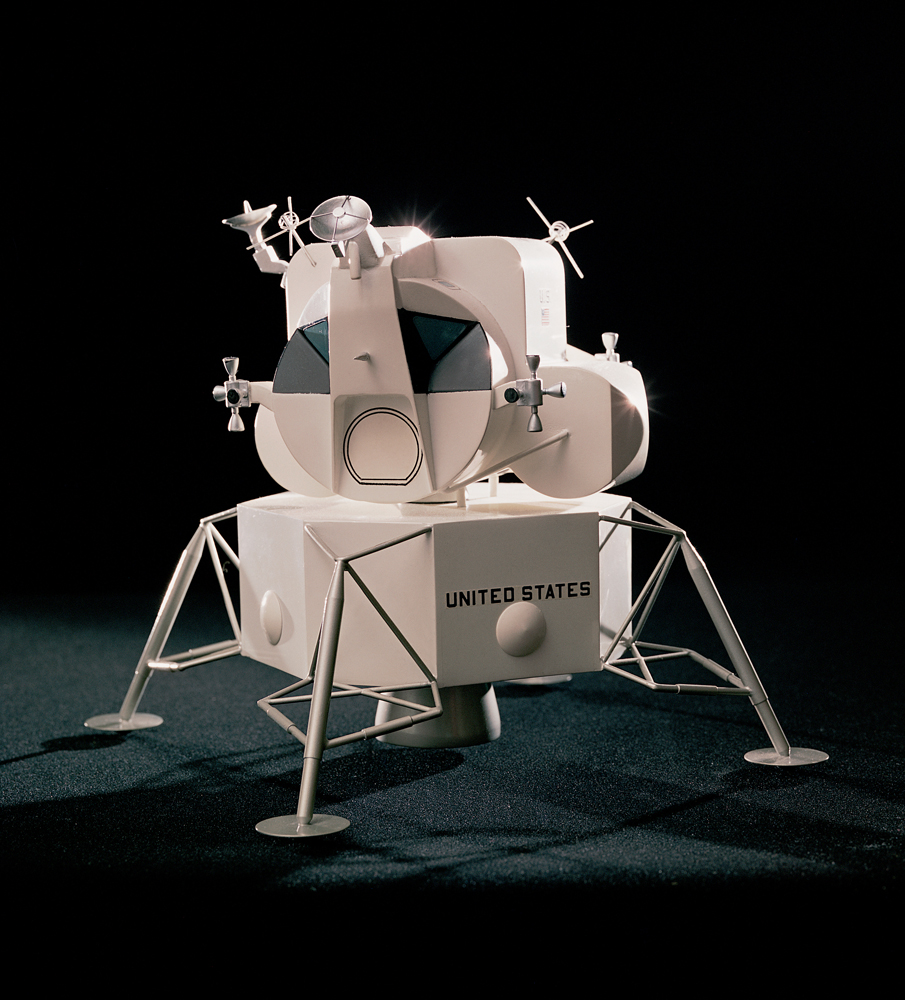 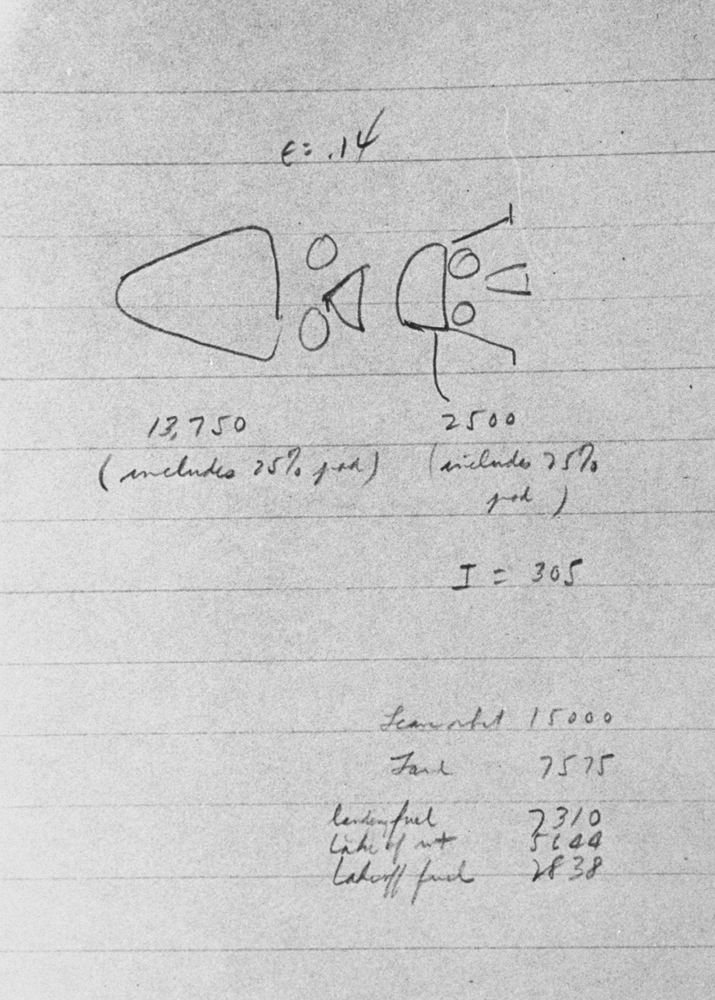 A sketch made by Dr. John C. Houbolt in 1961 for a lunar module, later adopted by NASA for Apollo 9. 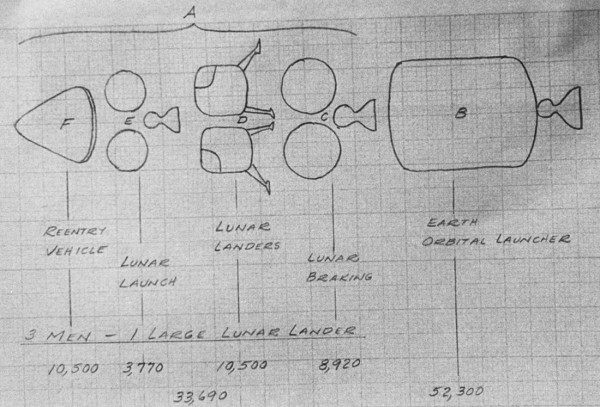 This sketch made by Dr. John C. Houbolt in 1961 shows a modular concept much like the one that was ultimately adopted by NASA for the Lunar Excursion Module. 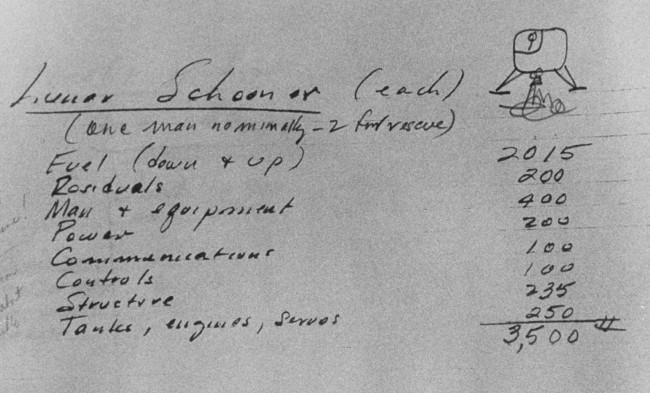 A sketch by Dr. John C. Houbolt suggested a design for a moon landing craft designated the “Lunar Schooner,” in 1961 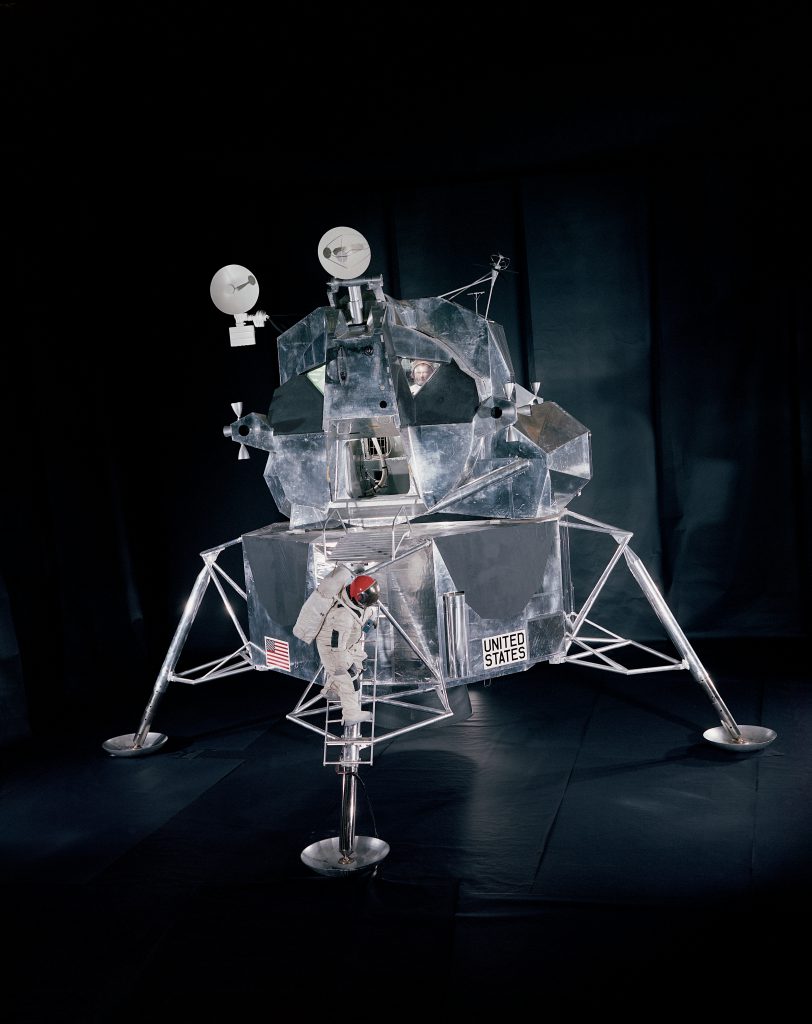 A full-scale model of the Lunar Excursion Module, 1969. 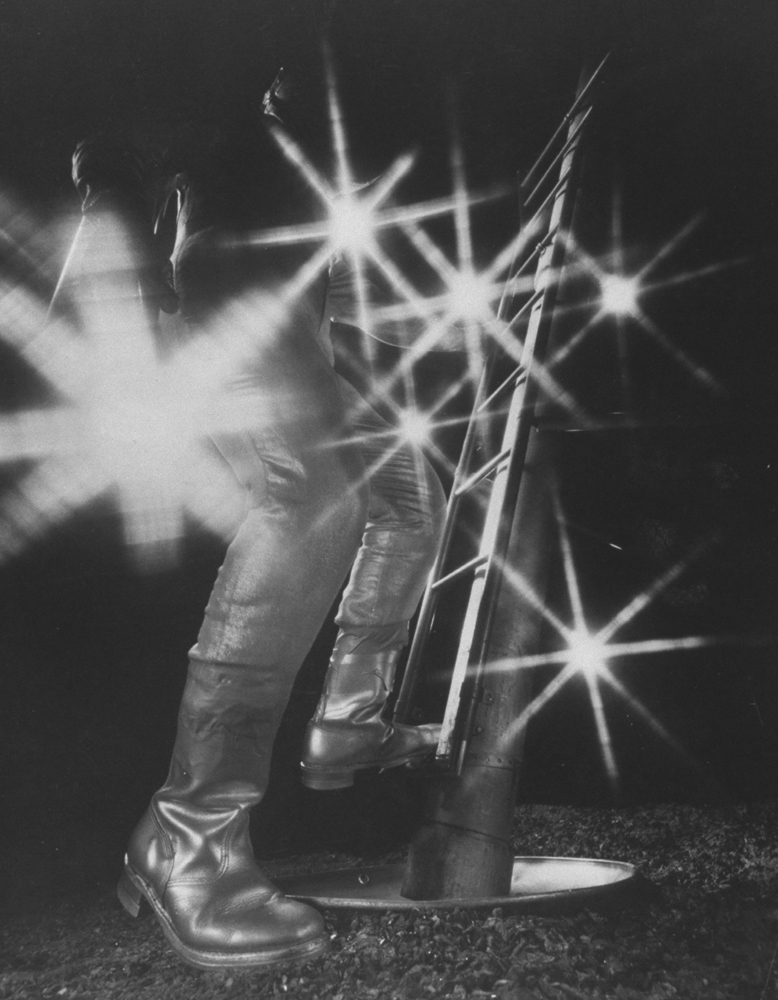 An astronaut descended the lunar module ladder during an enactment of a moon landing during a training exercise, 1967. 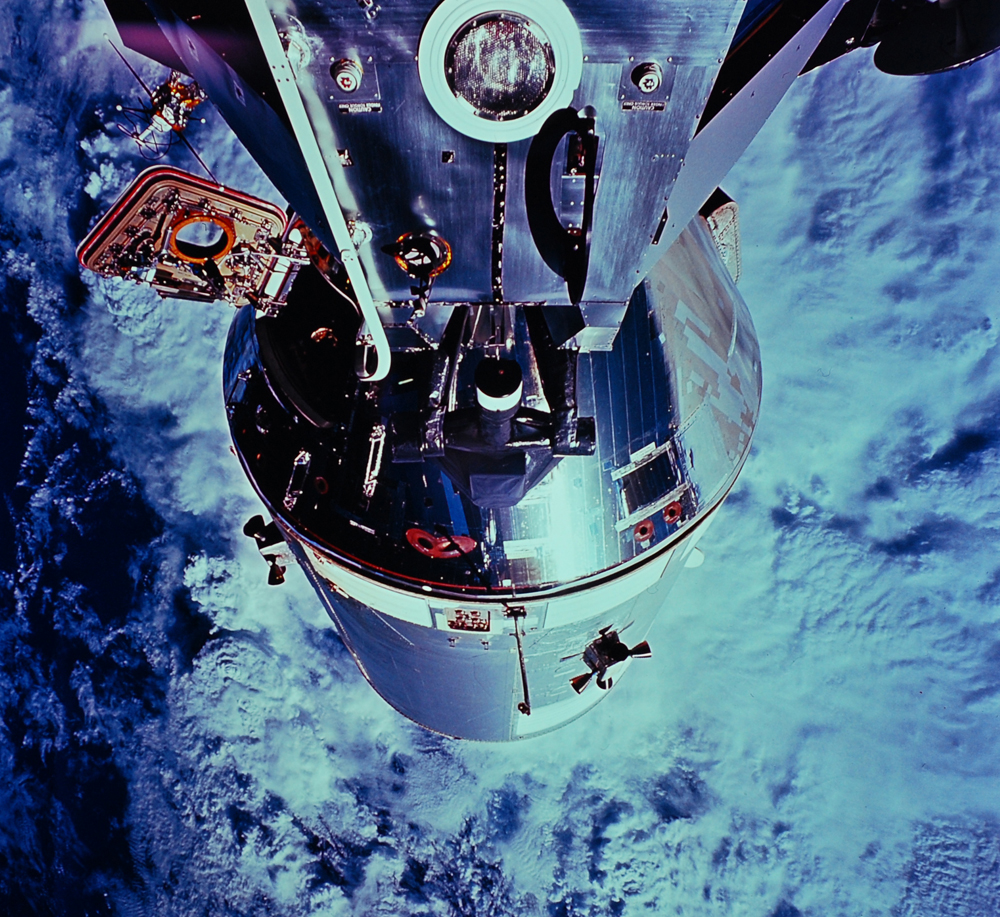 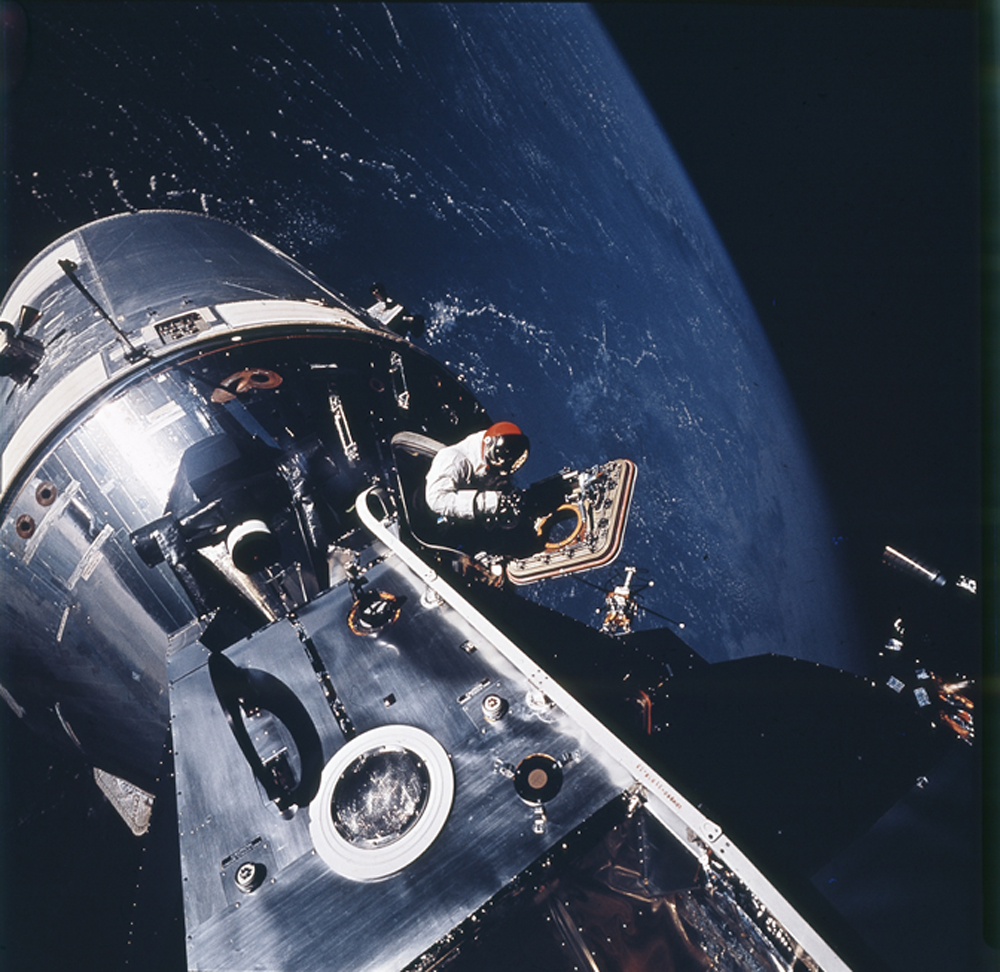 Apollo 9, March 1969. On the fourth day of the mission, astronaut David Scott stood in the open hatch of the command module and scanned the blue earth below. 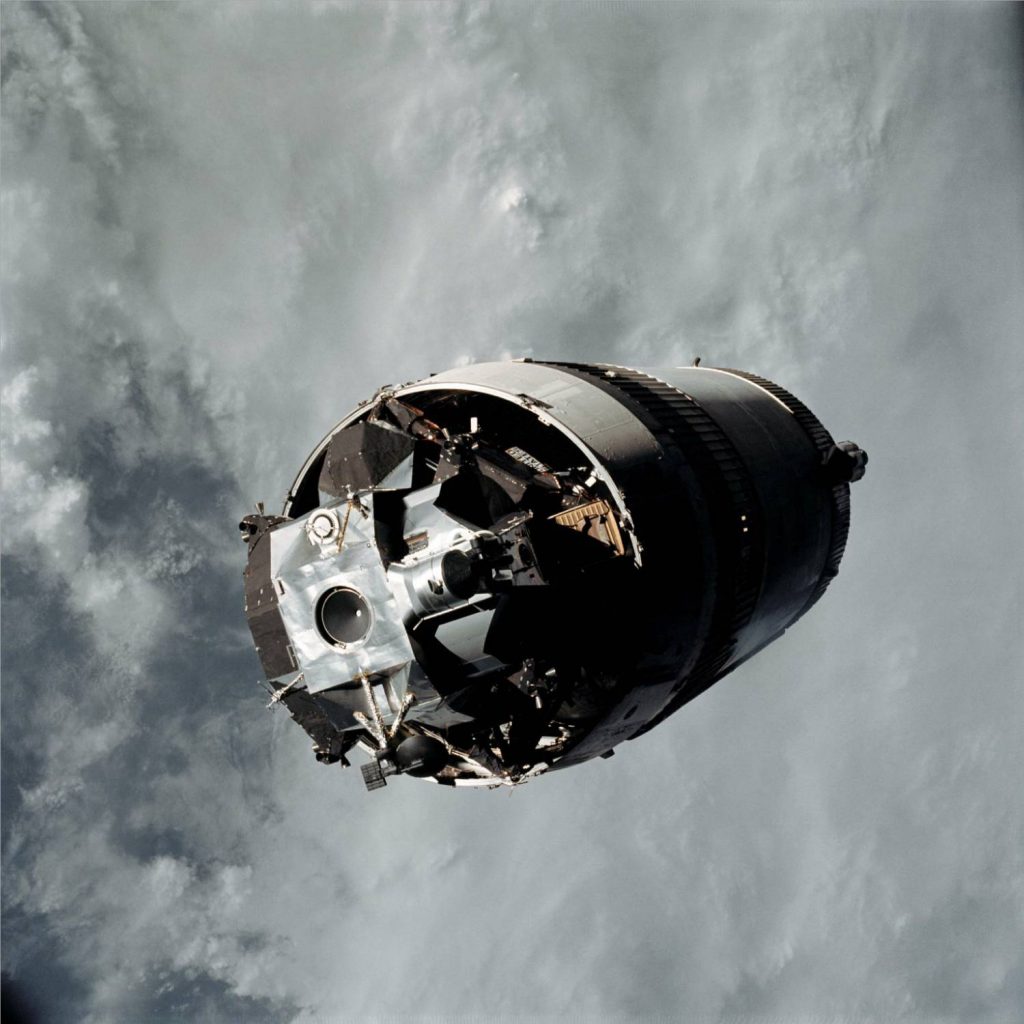 The Apollo 9 Lunar Module, a.k.a., “Spider,” remained attached to the Saturn rocket stage while in low Earth orbit, March 1969. 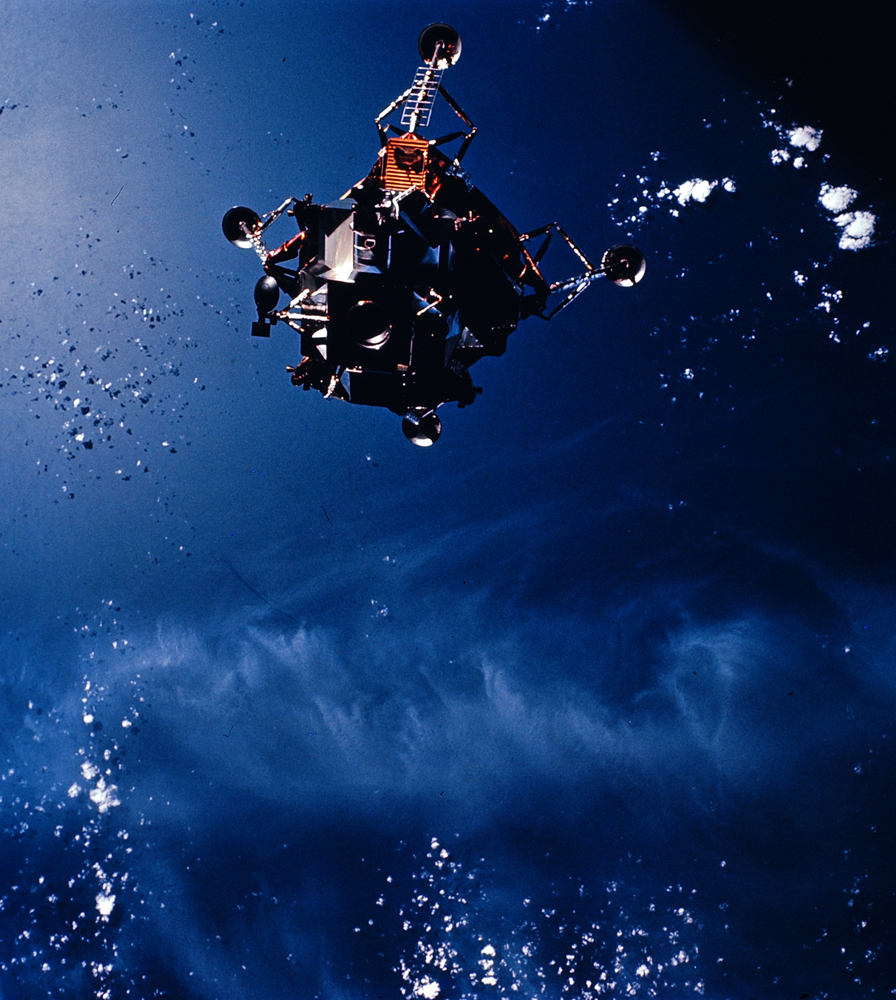 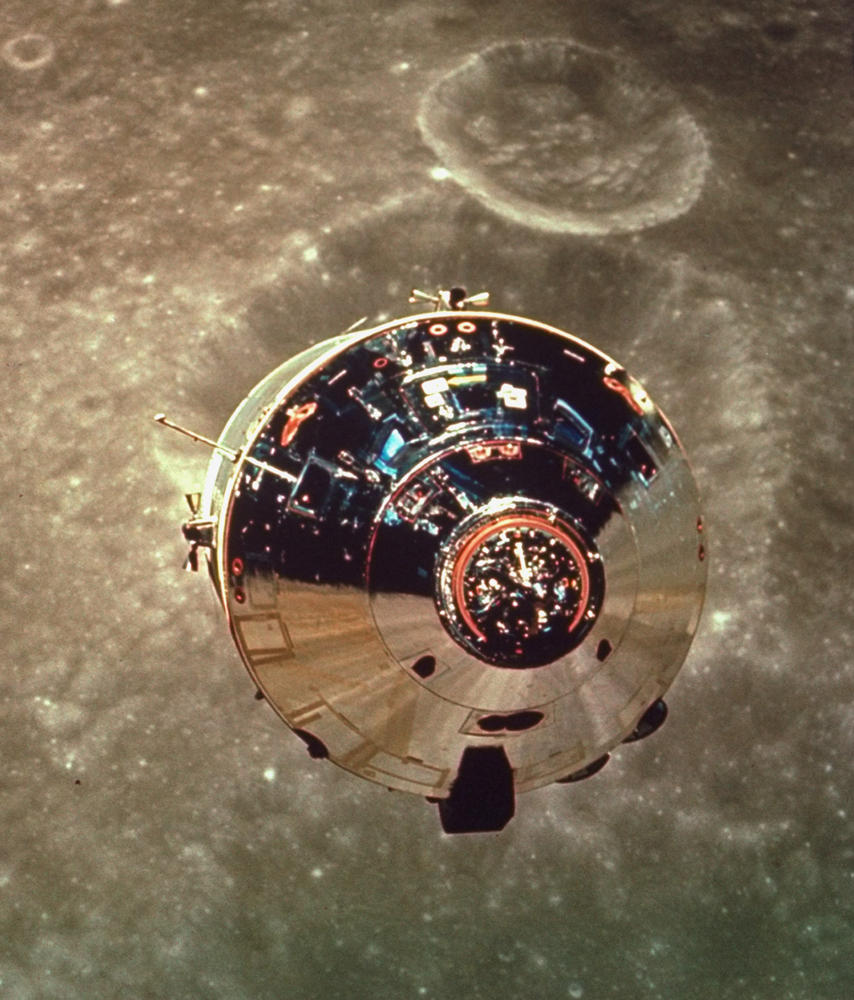 The Apollo 10 command module, piloted by astronaut John Young on his third space flight, entered into low orbit above the moon in May 1969 during a “dry run” for the July 1969 moon landing. The lunar module on this mission was nicknamed “Snoopy”; the command module was nicknamed “Charlie Brown.” (Charlie Brown, after all, rarely gets to have any fun. The same could not possibly be said of Young himself: he made six space flights over his 40-year career with NASA, and remains the only astronaut to have piloted four distinct classes of spacecraft: Gemini; the Apollo command and lunar modules; and the Space Shuttle.) 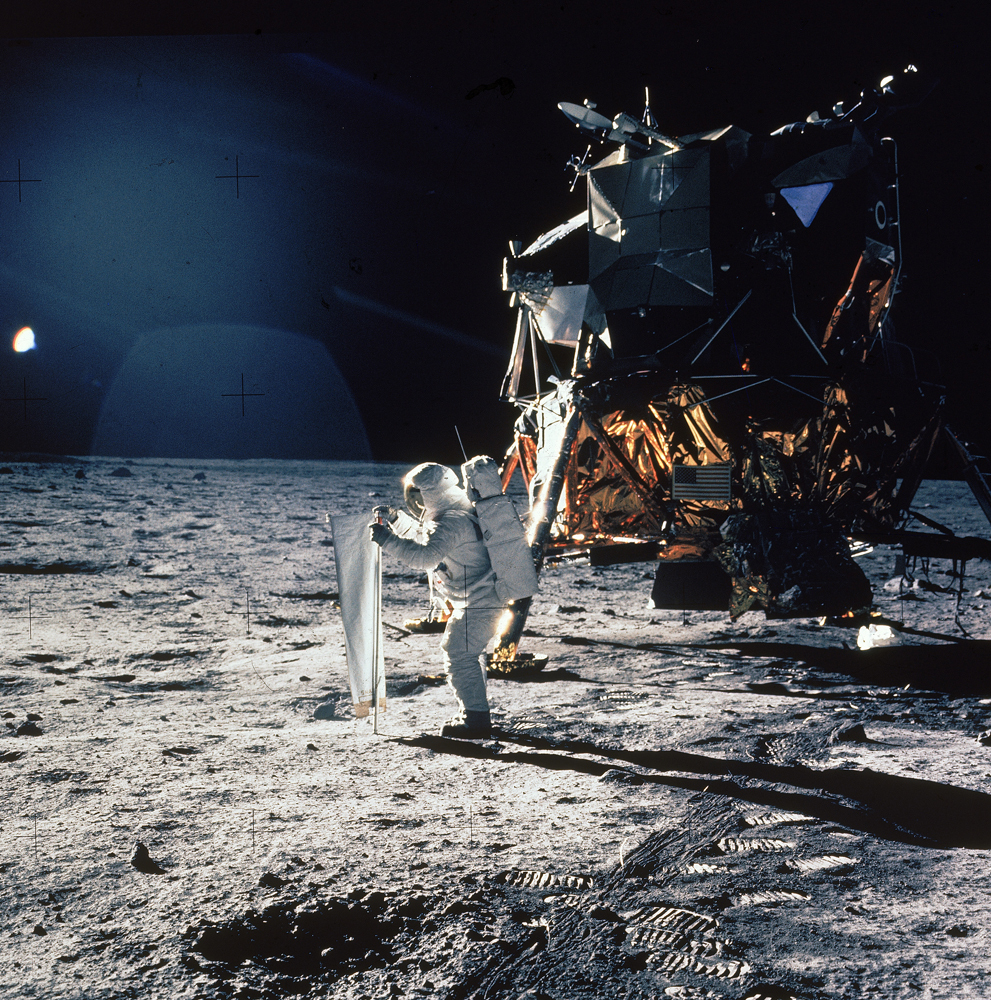 During Apollo 11’s historic moon mission in July 1969, astronaut Buzz Aldrin unfurled a “solar wind sheet” designed to collect atomic particles blowing from the distant sun. The Lunar Excursion Module, which got Aldrin and Neil Armstrong safely to and from the lunar surface, stood behind him. 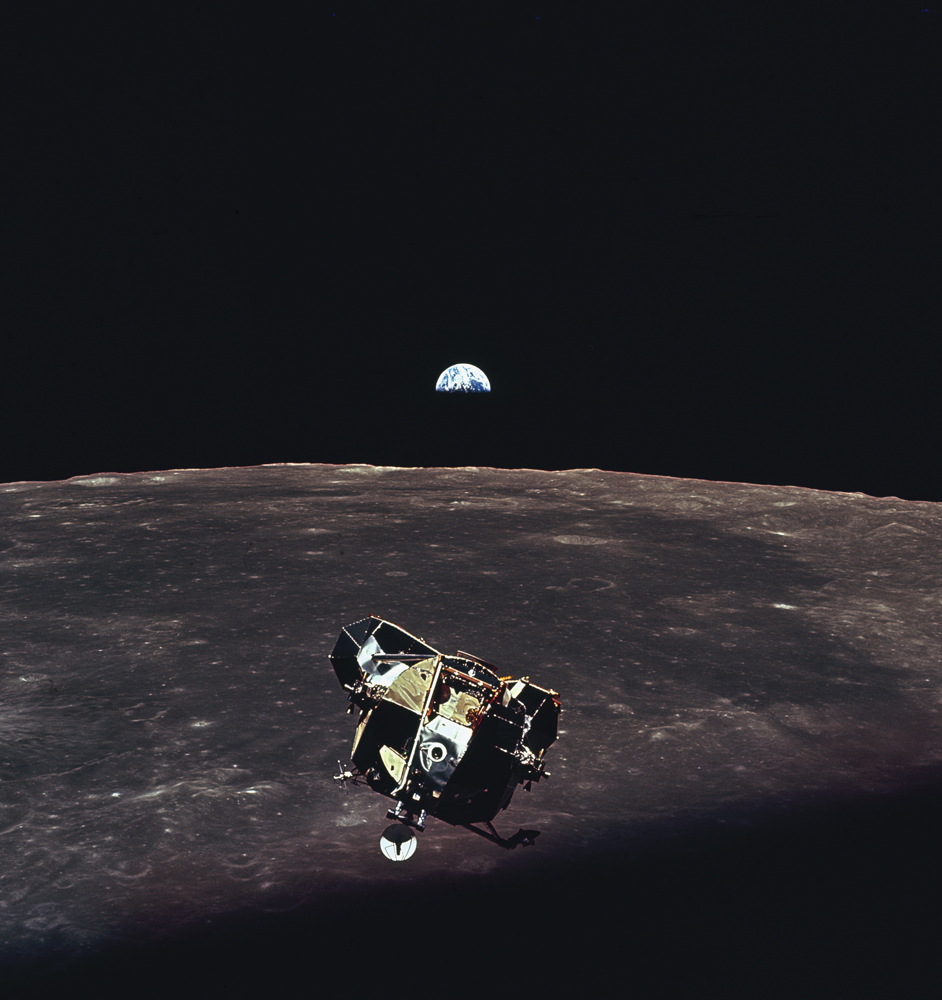 With the Earth visible in the distance above the moon’s horizon, Apollo 11’s lunar module ascended toward the command module (piloted by astronaut Michael Collins while Armstrong and Aldrin were on the lunar surface).