Republican presidential candidate Robert Taft, a U.S. Senator from Ohio, appears dismayed as he holds a rooster during his 1952 primary campaign.

“A national political campaign,” H.L. Mencken once observed, “is better than the best circus ever heard of, with a mass baptism and a couple of hangings thrown in.”

Baptisms and hangings aside, Mencken’s characterization of a campaign as a circus-like affair alternately thrilling, entertaining, silly and (occasionally) a matter of life and death still strikes a chord. Just like at the circus, during any hard-fought, high-profile campaign we watch, shake our heads and hold our breath, stunned by the spectacle and wondering how on earth the performers can keep going day after day, night after night.

But it’s also worth pointing out that, in some very elemental ways, pretty much all American political campaigns are very much alike, and (like circuses) they have looked and felt the same for as long as Democrats and Republicans have been vying for the House, the Senate, governors’ mansions and, of course, the Oval Office.

Here, LIFE.com presents photos of American politicians on the campaign trail: famous leaders and largely forgotten pols shaking hands, kissing babies, eating everything put in front of them, traveling in planes, trains and automobiles in search of one more vote. It’s not pretty but then, while it might be highly entertaining, no one ever said that politics was an especially attractive endeavor. 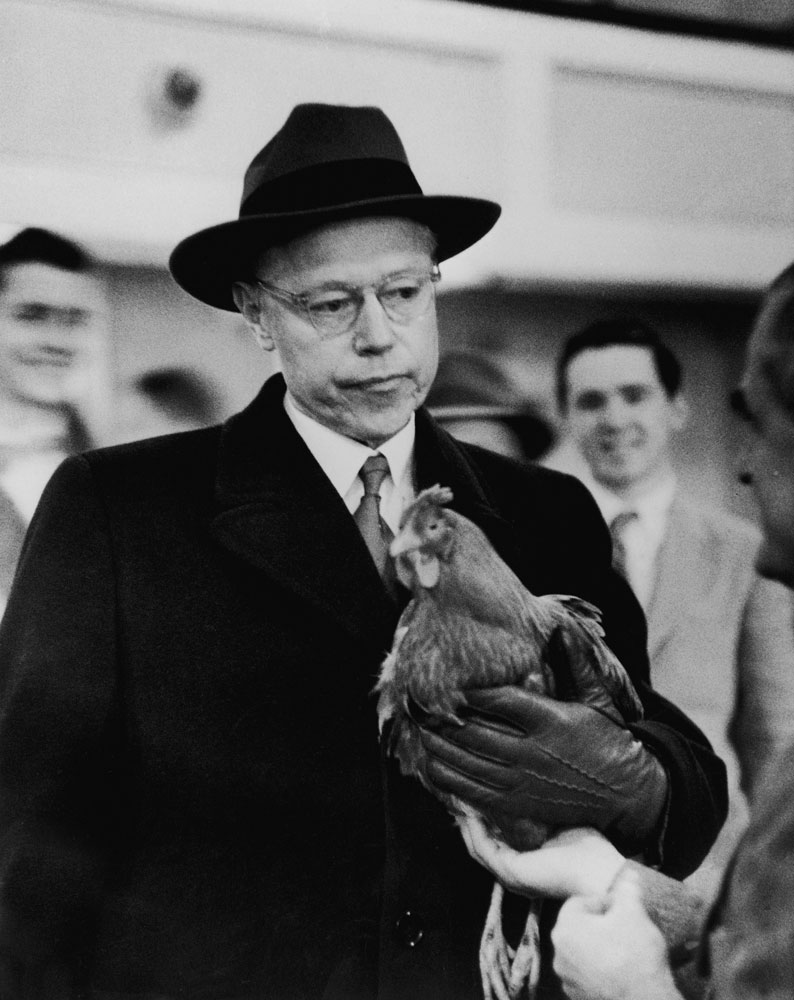 Republican presidential candidate Robert Taft, a U.S. Senator from Ohio, appears dismayed as he holds a rooster during his 1952 primary campaign. 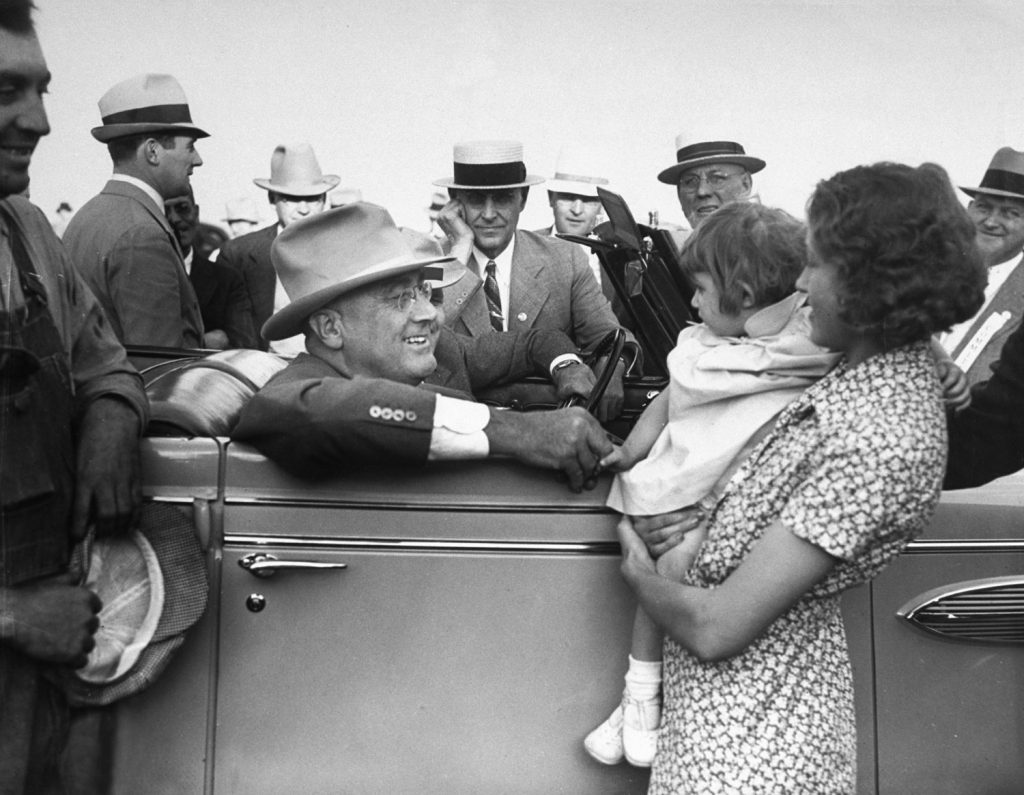 President Franklin D. Roosevelt talks to a young mother while sitting in his car during a trip to the West in 1936. 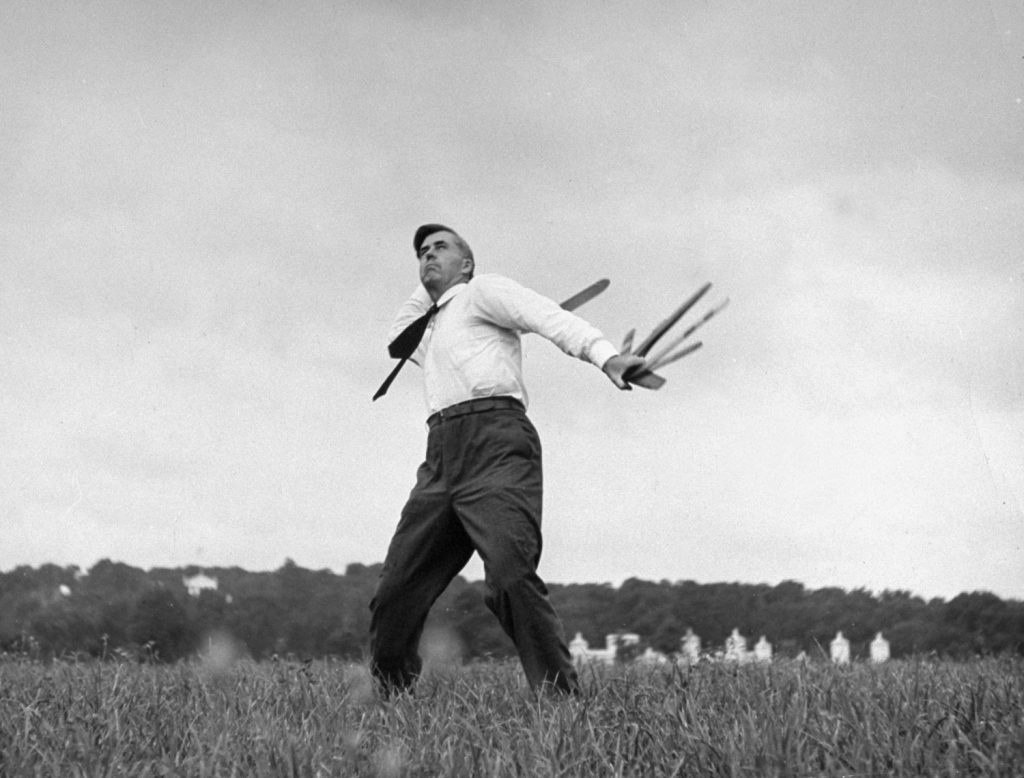 Vice Presidential candidate Henry A. Wallace throws a boomerang in a field in January 1940. Wallace, who was vice president during FDR’ second term and served as the secretary of both Commerce and Agriculture, was relatively famous for his prowess with the boomerang, and could occasionally be seen in the early morning near the Lincoln Memorial in the 1940s, hurling the curved, lethal-looking pieces of wood and catching them as they returned. 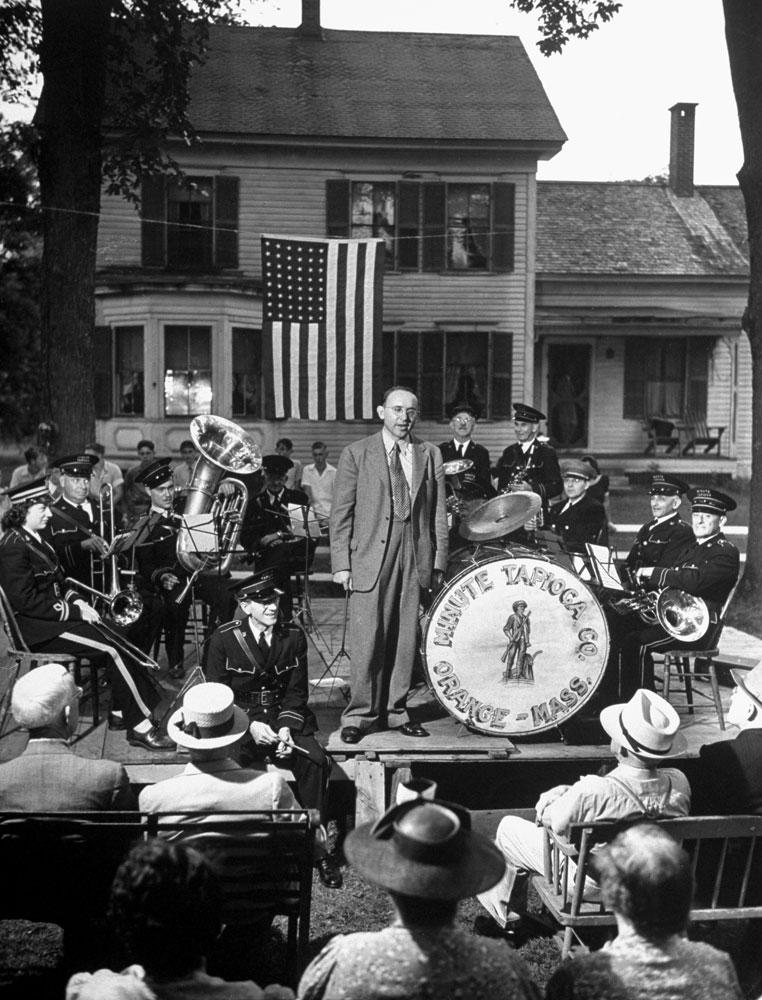 Republican candidate for Congress Raymond Leslie Buell gives a campaign speech on a platform surrounded by townspeople in a small Massachusetts park in August 1942. 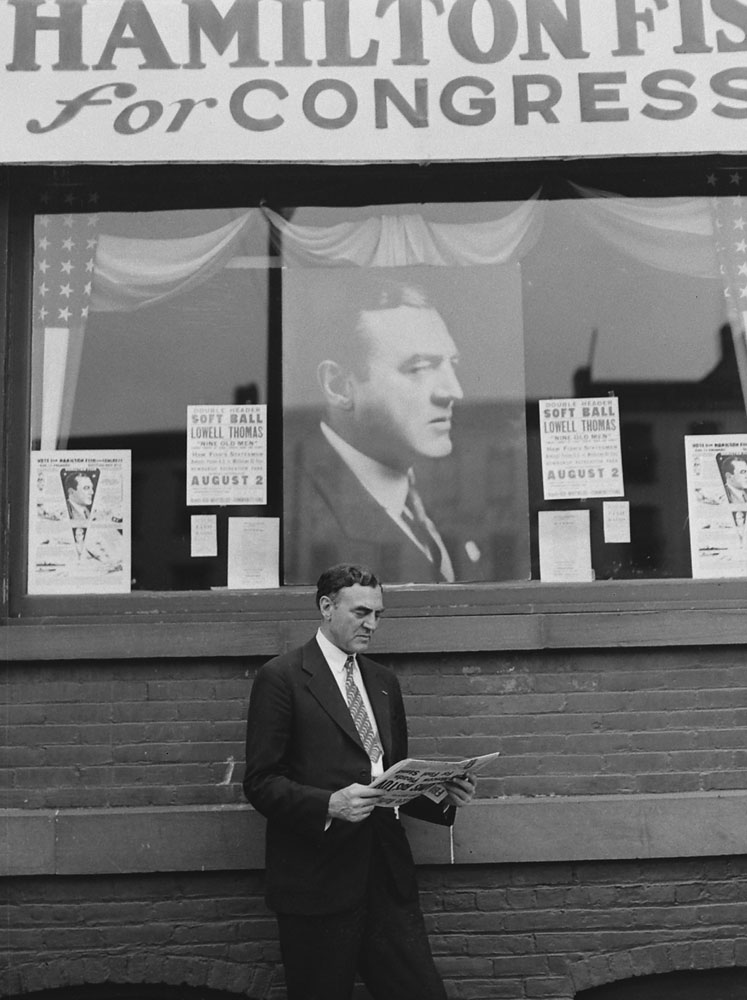 Hamilton Fish, a Republican Congressman from New York who served 25 years in the House, stands before his likeness in the midst of a campaign. 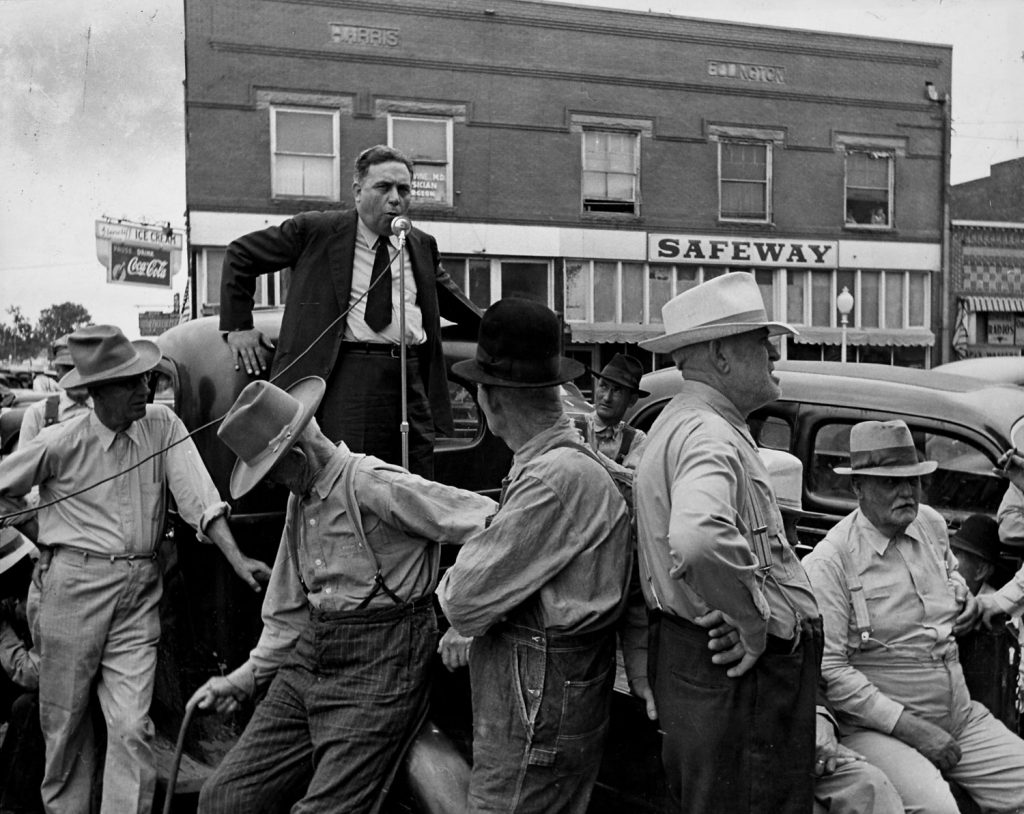 Gubernatorial candidate Gomer Smith talks to small gathering from the bed of a feed truck, Wagoner, Oklahoma, in June 1942. 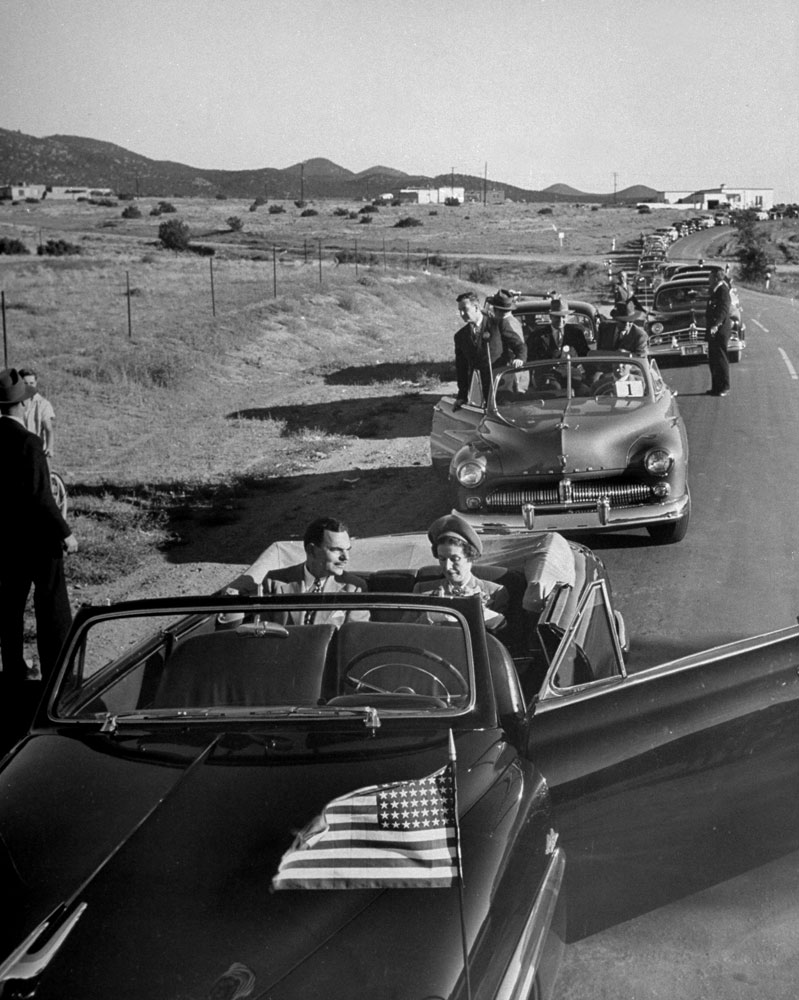 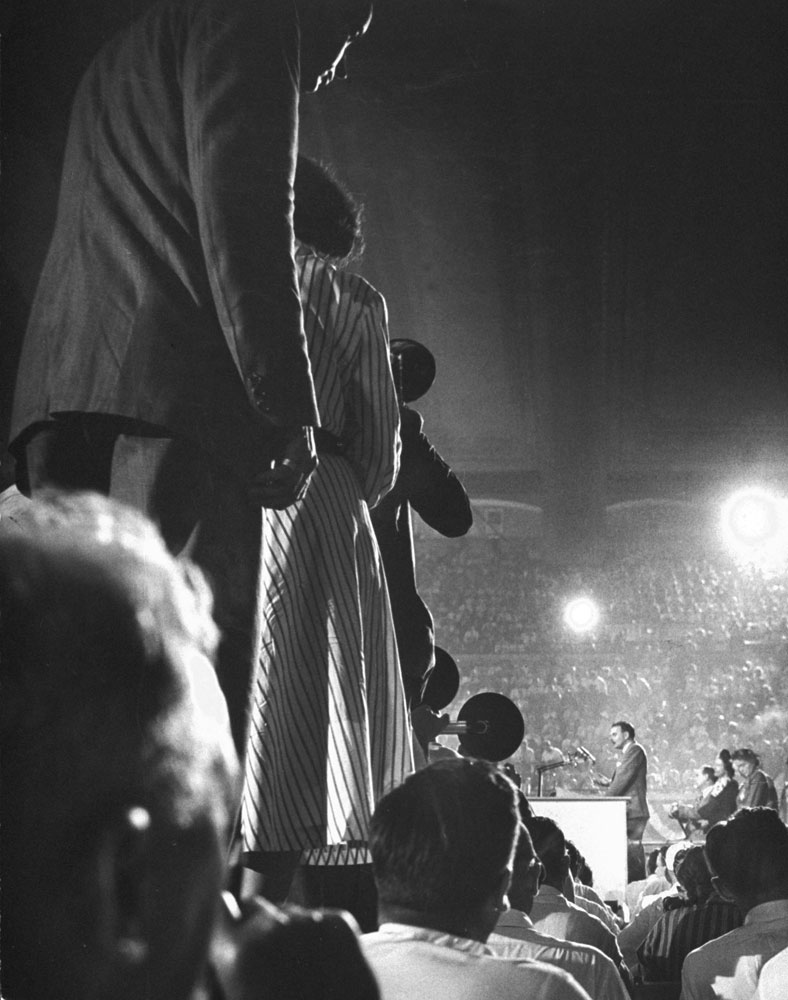 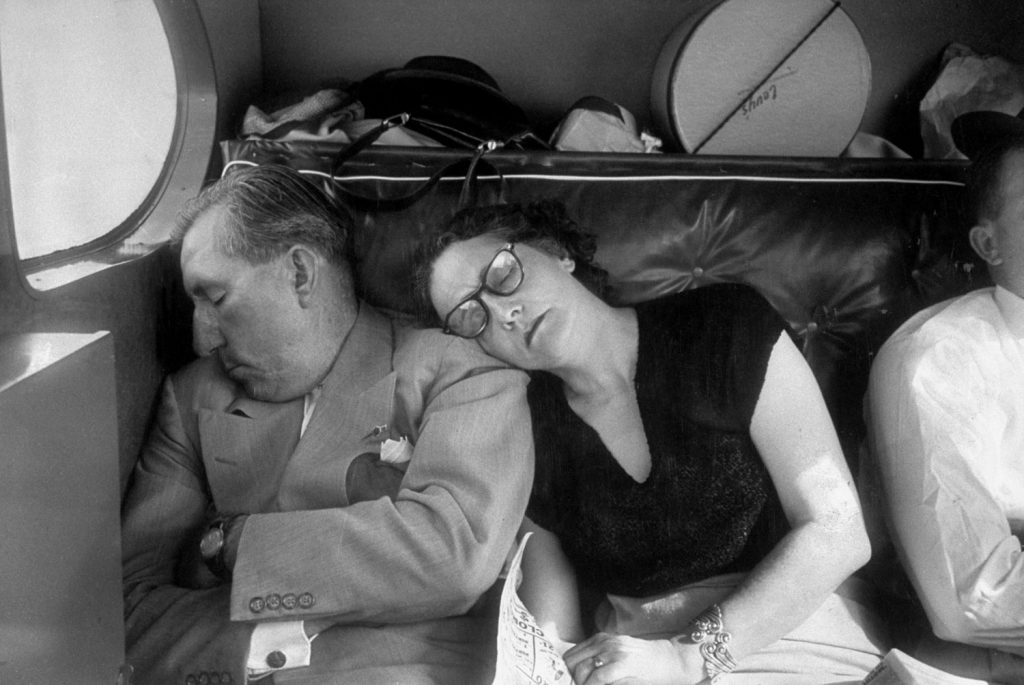 Claude Pepper naps with his wife in the back seat of a chartered plane as they fly home after his last campaign speech in May 1950. Pepper, a Democrat, represented Florida in the Senate for 15 years (1936-1951), and the Miami area in the House for another 26 (from 1963 until his death in 1989). 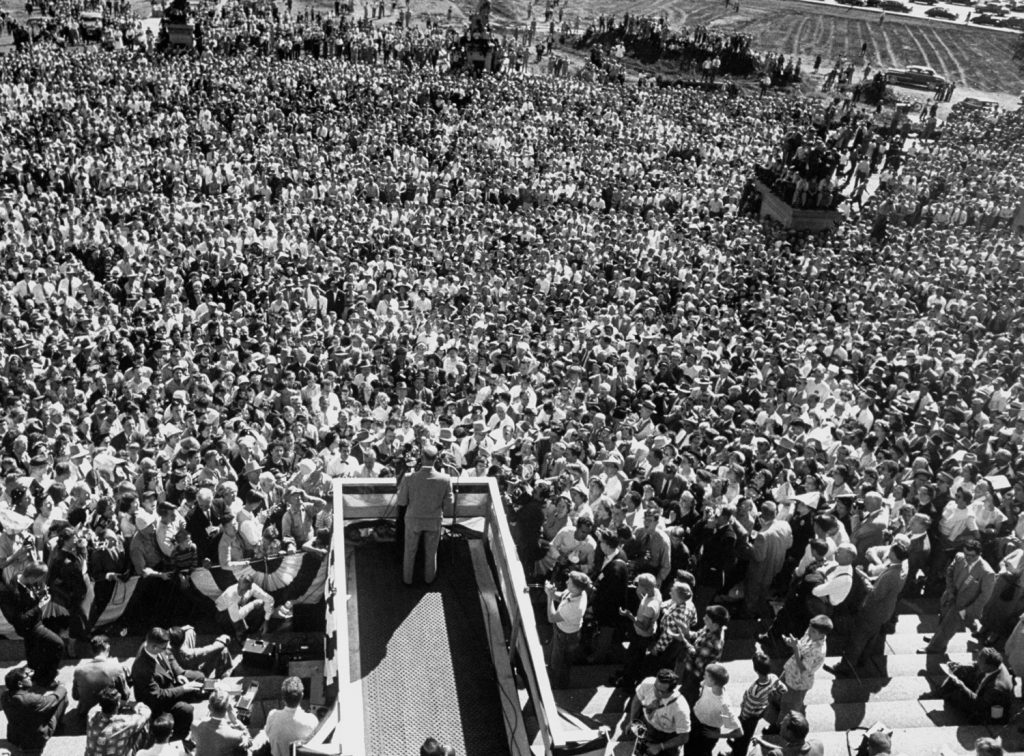 Republican presidential candidate Dwight D. Eisenhower stands at a lectern delivering a speech during a “whistle stop tour” of the Midwest in September 1952. He would go on to defeat Democrat Adlai Stevenson in November of that year and serve two terms in the White House. 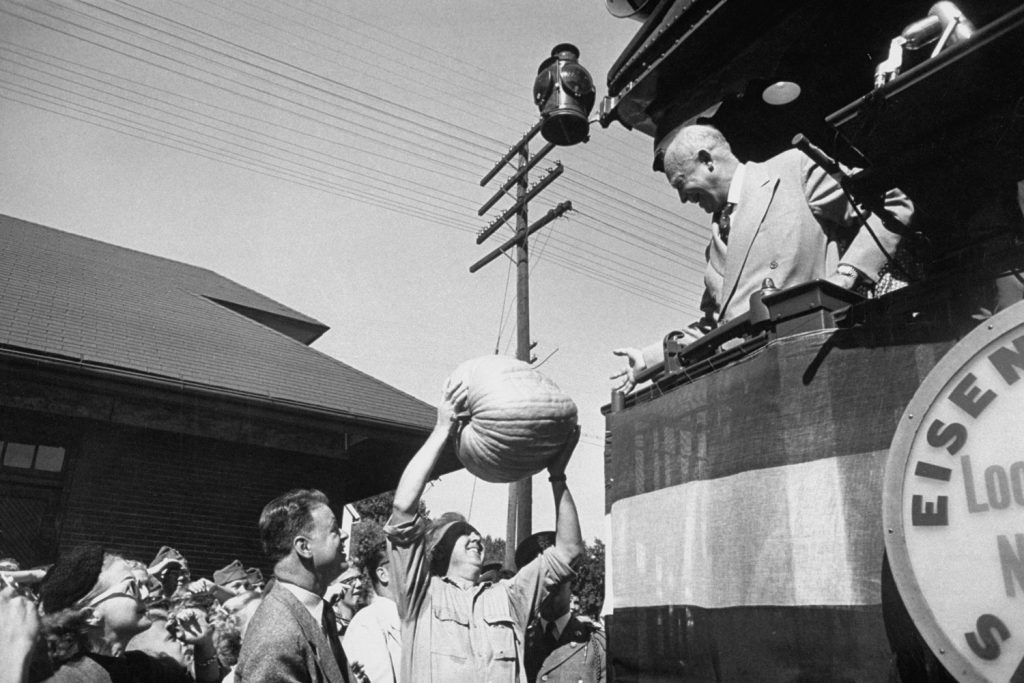 Republican presidential candidate Dwight D. Eisenhower accepts a pumpkin from an admirer during his whistle stop tour in September 1952. 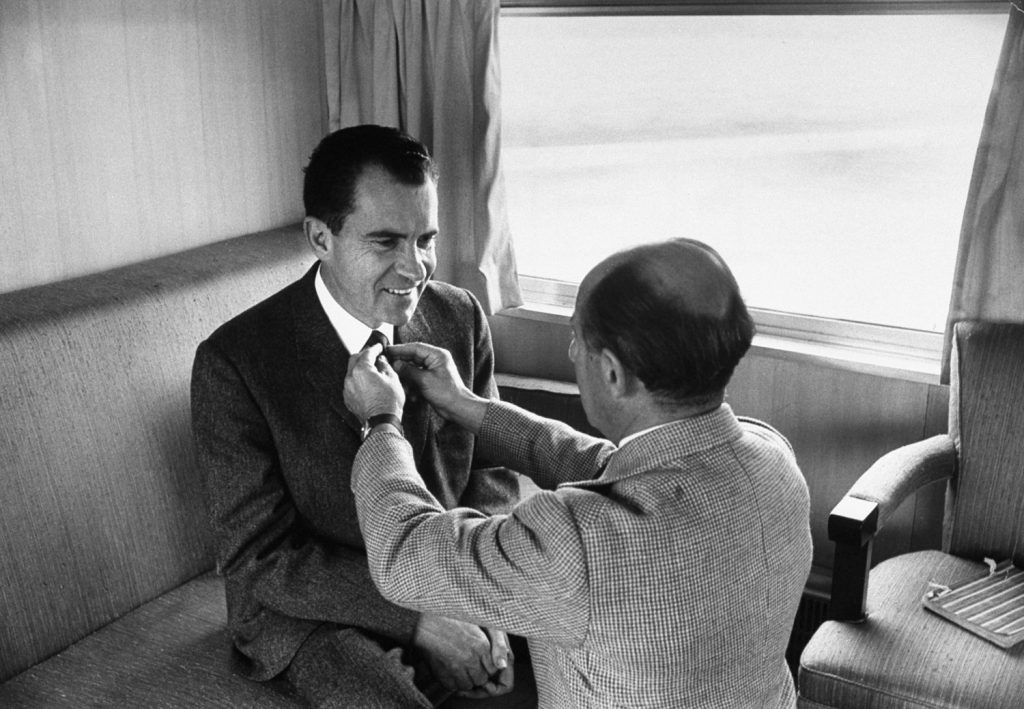 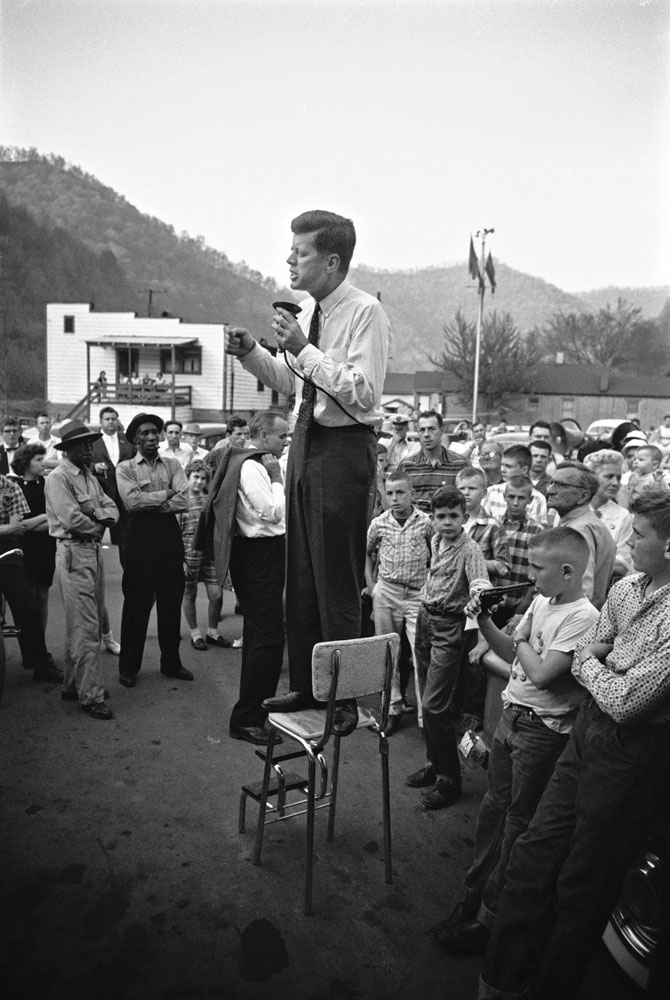 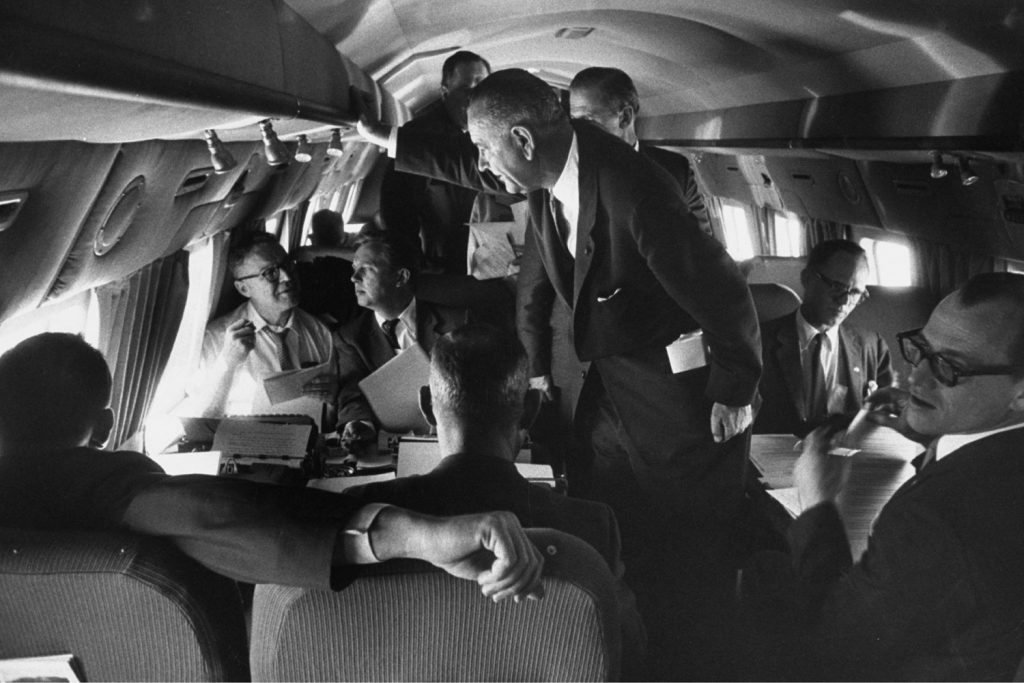 Senator Lyndon B. Johnson (D-Texas) talks with staff and reporters while on a plane in April 1960, before accepting John Kennedy’s offer to be his running mate. 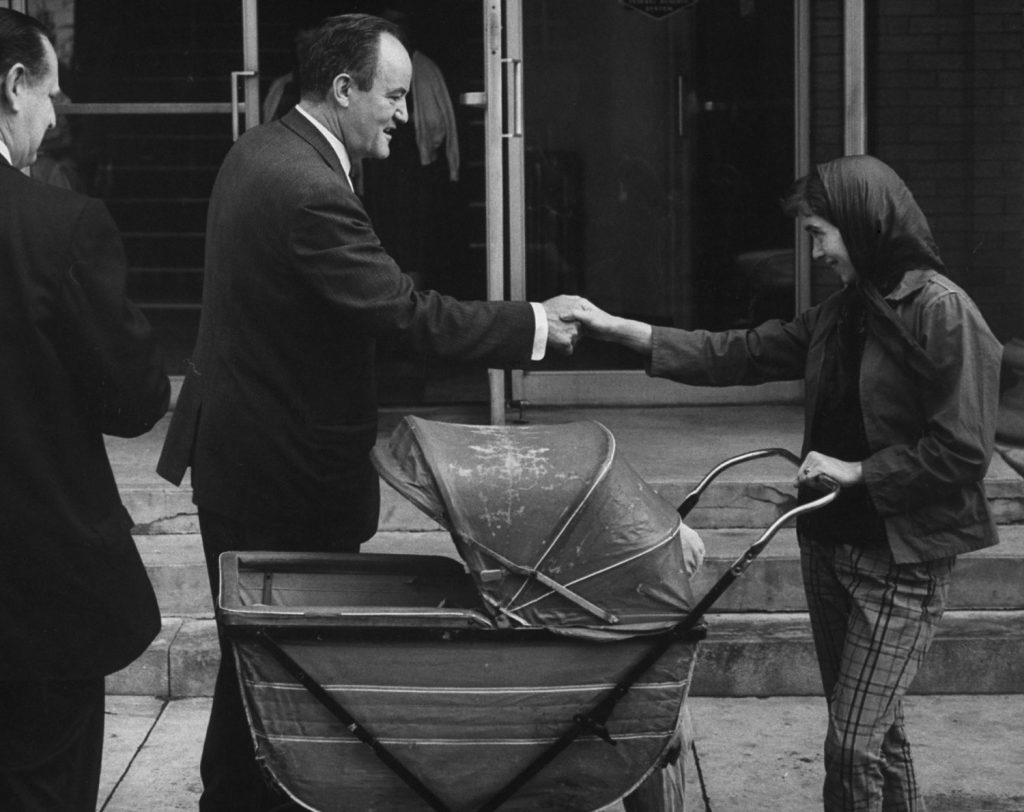 Hubert Humphrey shakes hands with a voter while campaigning prior to the West Virginia primary in April 1960. 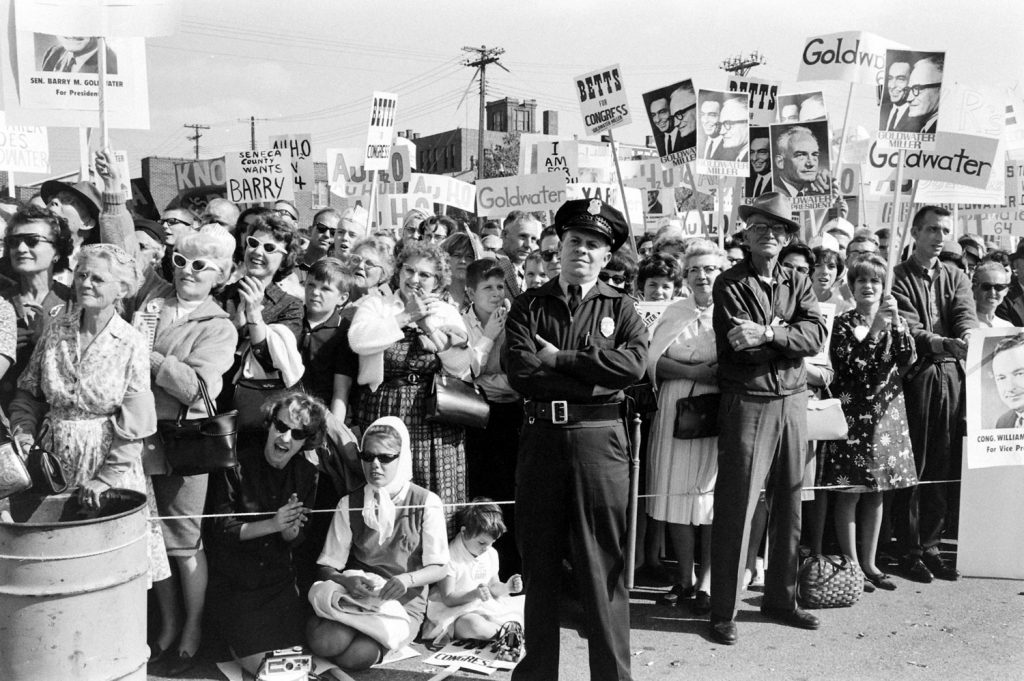 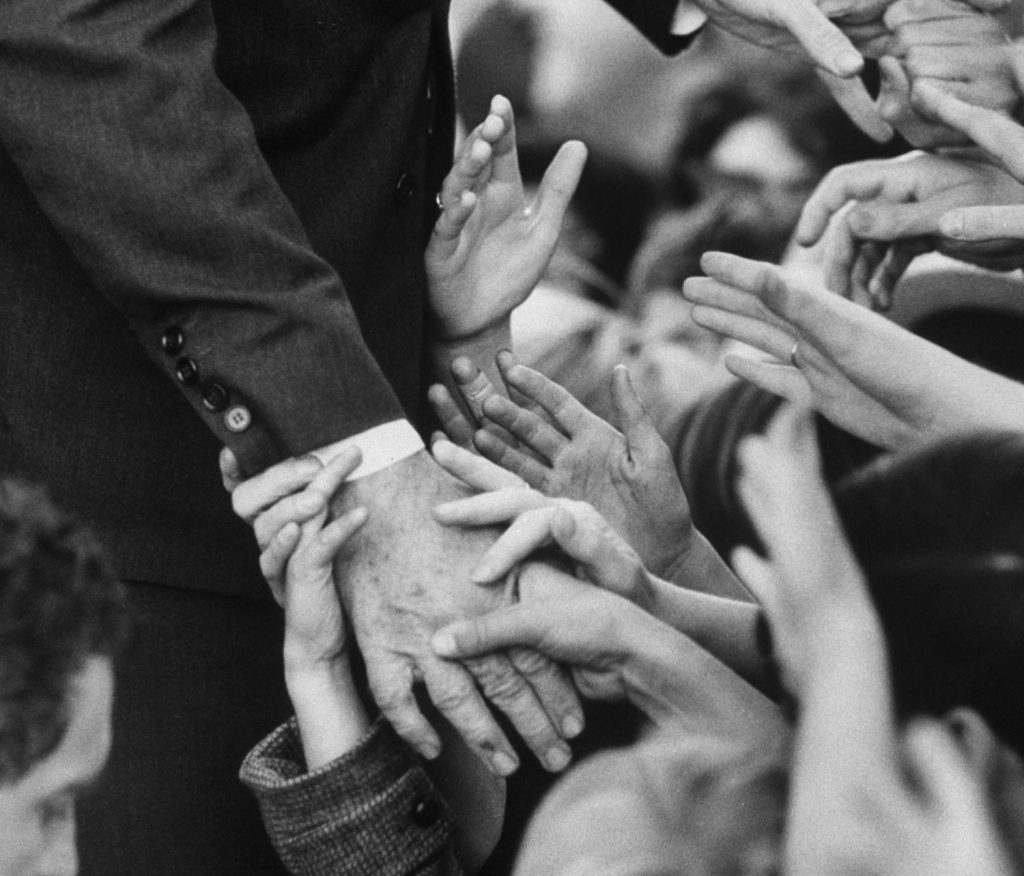 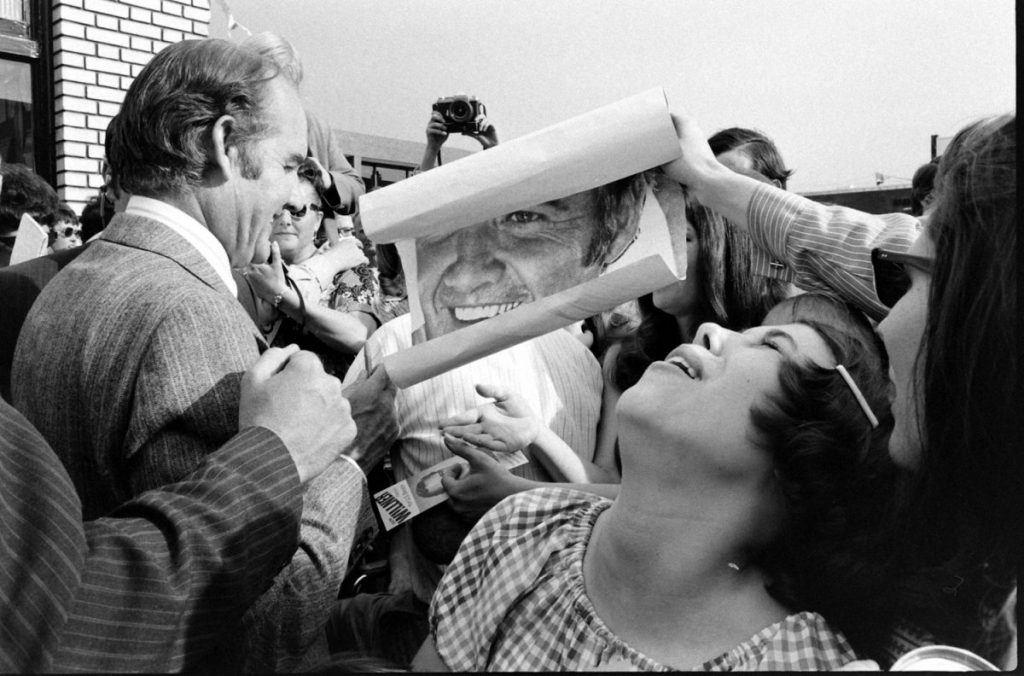