David Douglas Duncan and the Korean War: A Defining Photo

Marine Capt. Francis "Ike" Fenton pondered his fate and the fate of his men after being told that his company was nearly out of ammunition, Korea, 1950.

Marine Capt. Francis “Ike” Fenton pondered his fate and the fate of his men after being told that his company was nearly out of ammunition, Korea, 1950.

Missouri native David Douglas Duncan, a native of Kansas City, is known, primarily, as the signature photographer of the Korean War. In the pages of LIFE magazine and elsewhere, his pictures brought the brutality home to countless Americans who understandably, with memories of the just-finished World War II still fresh in their minds, might have wanted nothing more than to blot out the carnage being inflicted and endured in their name half a world away.

Duncan’s photographs from Korea conveyed a searing, inconvenient truth: namely, that war is still hell, and men, women and children still die horrible deaths, even when the war in question is labeled a “police action.” But Duncan knew war long before he made his harrowing images at Chosin Reservoir and in the rubble-strewn streets of downtown Seoul. He was there, too, in the Second World War, covering battles and suffering shrapnel wounds in the Pacific as a combat photographer with the Marine Corps. He was in Vietnam, a decade and a half after Korea, at Con Thien and Khe San.

The photograph that accompanies this story, made in Korea in 1950, is not only one of the greatest photos made during that “forgotten war,” but is one of the finest war pictures ever made by anyone, in any conflict. In his classic 1951 book, This Is War!, Duncan wrote of the stunned, resolute Marine captain trying to steady himself after an attack by North Korean troops, as ammunition ran dangerously low and reinforcements were nowhere in sight: “Ike Fenton, drenched and with the rain running in little droplets from his bearded chin, got the news. His tattered Baker Company Marines had only those few rounds in their belts remaining. If the Reds were to launch one more attack they would have to be stopped with bayonets and rifle butts.

In its straightforward, unblinking portrayal of the futility, madness, endurance and, at times, the simple nobility one witnesses in the midst of a firefight or a protracted, bloody campaign, Duncan’s picture of Capt. Ike Fenton has rarely been equaled, and never surpassed. Like so many of Duncan’s pictures from Korea, it is indelible.

Talking to Duncan about his Korea pictures, meanwhile, was bracing not merely for the sharpness of the man’s memories so many years later, but for the unexpected and unsolicited declarations of a craftsman congenitally prone to speaking his mind.

“The thing that comes back to me right away, right now, when looking at these pictures again,” Duncan told LIFE.com, “is that at no time did any Marine feel he had to look around to see what the South Koreans were doing behind him [during that war]. The Marines in Korea never feared ‘friendly fire’ or artillery coming from the South Koreans from their allies like they sometimes did later in Vietnam, fighting with the South Vietnamese. The Koreans could be trusted.”

In the years after Korea, Duncan photographed other conflicts all over the globe, but also proved himself a sensitive portraitist and a master of place. He published books on subjects ranging from his great friend, Pablo Picasso, to the Kremlin and the Middle East (The World of Allah, 1983). He published books on the sunflowers of France, Cartier-Bresson and an incredibly moving 100-page work on his beloved German Shepherd, Thor—a creature possessed of what Duncan characterizes as an “Olympian serenity.”

In 2003, he published his monumental and, at the same time, somehow intimate autobiography-in-images, Photo Nomad, featuring pictures and recollections from across seven decades. Every one of his many books is worth seeking out; but for anyone interested in photojournalism in the 20th century, Photo Nomad is indispensable. 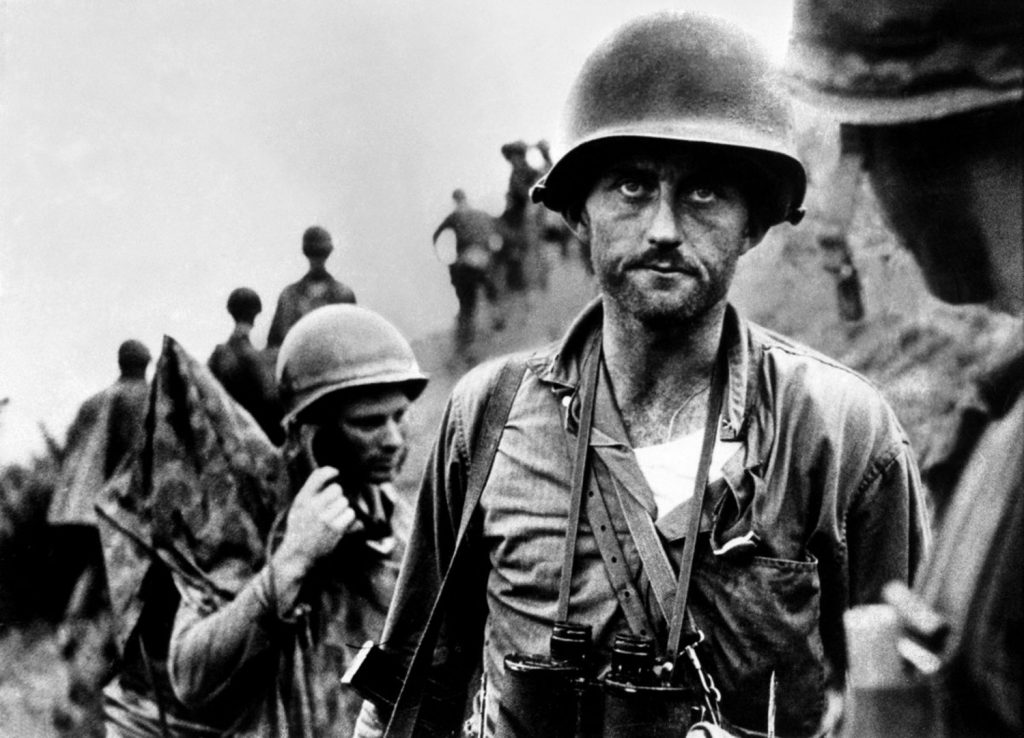 Marine Capt. Francis “Ike” Fenton pondered his fate and the fate of his men after being told that his company was nearly out of ammunition, Korea, 1950.